Liz indulged me for a while yesterday and patiently looked after the kids while I dug through some newspaper archives in the Qld State Library at Southbank.

I arrived by ship in Brisbane in May 1965 with my Mum, Dad and Sister. We were “Ten Pound Poms”.

I have a postcard of Ellinis sitting in my office here as I type:

So I was looking through old copies of “The Courier Mail” for evidence of the arrival, and came across a couple of announcements from the Shipping Agents of Chandris – the owners of “Ellinis” – the ship we sailed on. I came accross these notices posted by Australia Express Co. Pty Ltd: 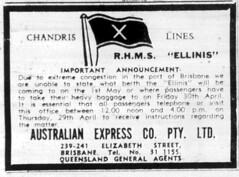 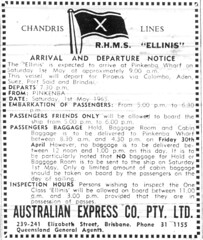 A couple of days before Ellinis arrived in Brisbane, the local shipping agent posted a notice in the city’s daily newspaper.

The ship was due to arrive on 1 May 1965 – the Saturday of the Labor Day Long Weekend. The port was very congested according to this ad.

Mum and Dad tell me that they eventually berthed at a “Wheat Wharf”, which I’m guessing was the old grain wharf at Pinkenba — on the northside of the river, out near Eagle Farm airport.

According to the other notice, Ellinis arrived at 9am on Saturday 1 May 1965.

It was the Labor Day long weekend, and in those days, Brisbane shut down for the three days. No shops were open, and most public services were operating at a minimum.

Dad says there were lots of people at the wharf waiting to greet friends and family arriving on Ellinis. They all waved from the shore as they recognized their loved ones on board.

Dad waved back, pretending he recognized someone on the shore who was supposed to be greeting us. No one was there. We were all alone in a new country. Mum was heavily pregnant with my brother Kevin, with my sister, who had just turned 1 year old, and me, who had just turned three.

We were bussed to “Yungaba” – a temporary migrant hostel under the Story Bridge, and put into large dormitories. Women and kids in one dorm, men in the other.

That night, laying in a strange dormitory full of unfamiliar people, we could hear the “thud, thud, thud” of cars driving over the bridge above us.

I’ve got a few other photos which I’ll try and dig up and post here soon.

If you’re interested, I’ve included more details from the page of the Courier Mail that each ad was on, so you can get an idea of what was happening in town at the time. It’s a bit boring – the ad was in the “Classified Ads” section, which doesn’t really make for riveting reading! 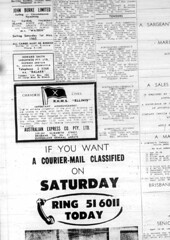 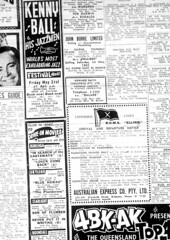 Incidentally, can you see that ad for radio station 4BK on the second page? That radio station is now known as “B105”. But in 1965, they didn’t have FM radio, so they broadcast on the AM Band.

But that’s another story.

3 Replies to “Arriving in Oz”