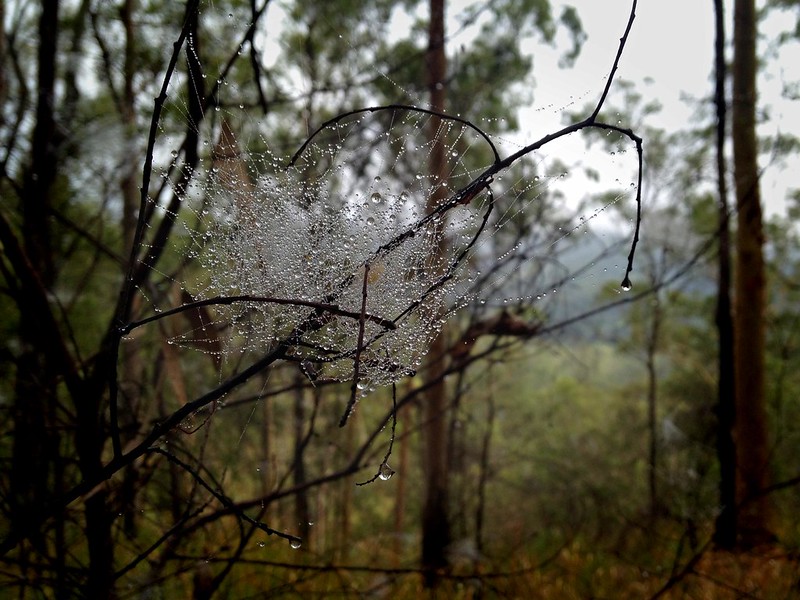 Becca emailed me a couple of months ago…

“I was wondering if you could link the following up to make a rideable loop….”

Then she rattled off a list of improbable places all over South East Queensland ranging from Moggill (near Ipswich), to Mount Glorious, Samford and Bunyaville.

She signed off by adding, “Please feel free to tell me if this is a daft idea”. 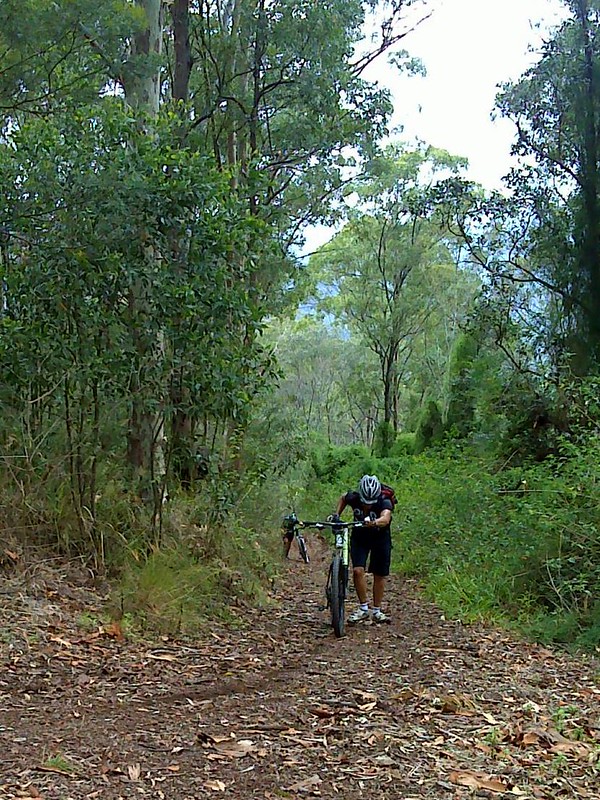 After a few exchanges with her, I eventually sent Becca a route labelled “Becca’s Suicide Loop” and the comment “Don’t do it!!!!”. The original route covered 112km and involved 3,000m of ascent. I’d never done a ride that tough, and felt a strange combination of guilt, worry, and goulish curiosity as I thought about my friends following my directions on this tough adventure without me.

As you probably know, I’m recovering (very well thanks) from knee surgery, and am unable to get out on the bike for a while. So I feel a bit like the colonial government in 19th century Australia, sending vulnerable explorers like Burke & Wills, and Buckley (of “Buckleys Chance” fame) into the hostile wilderness. 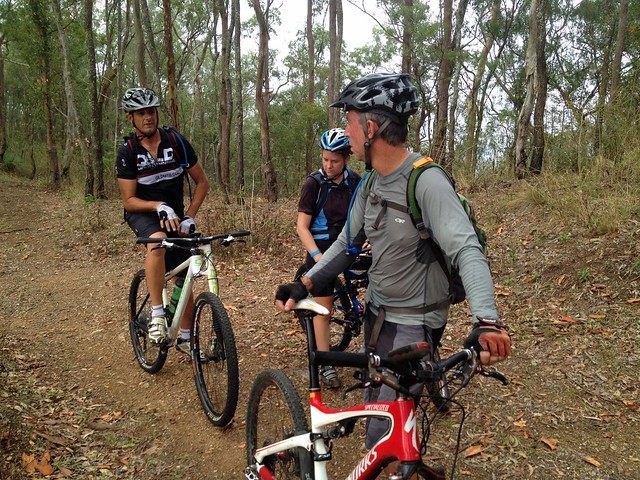 I was relieved when common-sense prevailed. My riding buddies: Becca, Eric, Jason and Paul decided to try about half of the original loop, starting at Upper Brookfield, and riding into the D’Aguilar Range via Mt Nebo before looping back via Camp Mountain and Gap Creek. It was still going to be a tough ride, with a hell of a lot of climbing, but I was now pretty sure they’d all get back alive. 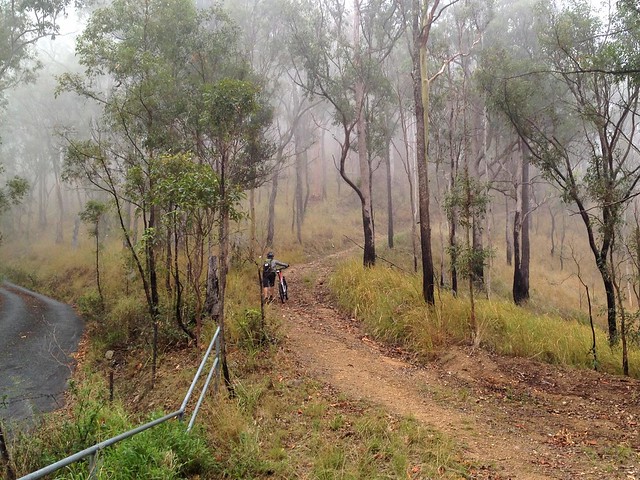 My ride notes to Becca started off like this:
1. Start at the Cricket Ground opposite Brookfield Cemetery at 548 Brookfield Road
2. Head west along Upper Brookfield Road
3. Consider how much this ride is like a bottle of Gin. It starts off pleasantly. By the end of the bottle it will kill you.
4. Turn right and ride up into the national park

Upper Brookfield is a beautiful green part of the world, with rolling hills, plenty of trees and quiet creeks. But once the riders left the bitumen and hit the dirt, they discovered how tough it can be.

Steep climbs, rough surfaces, water damage from recent rain, and ruts from motorized traffic had turned the park entry into a rugged hike-a-bike section that required a lot of walking. 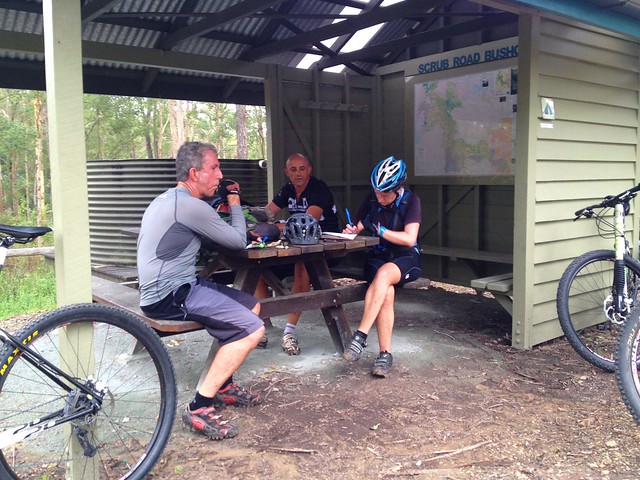 The ride up to the water tank and shelter on Scrub Road was a 16km up-hill slog with about 650m of climbing. In parts the gradient exceeded 22%. As Becca signed the guest book in the shelter, everyone rested, ate a few snacks and secretly thought a few angry thoughts about the evil architect of this loop – yours truly. 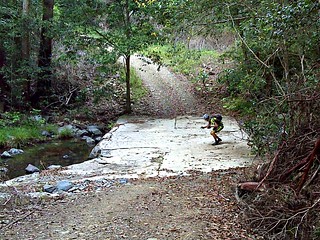 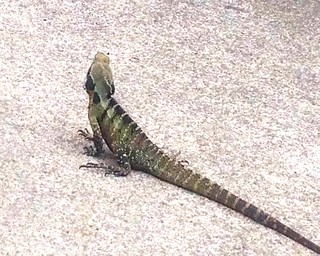 Most Mountain Bikers love the long fast descent down to the creek crossing on Scrub Road. After all the climbing it’s a delight to feel the cool breeze cutting through your sweatty clothes as you roll down-hill.

Jason is often on the lookout for ancient indigenous tree markings, historical remnants, or wildlife. It was no surprise when he jumped off his bike at the bottom of the hill and tried to convince this bearded dragon to pose for a photo. 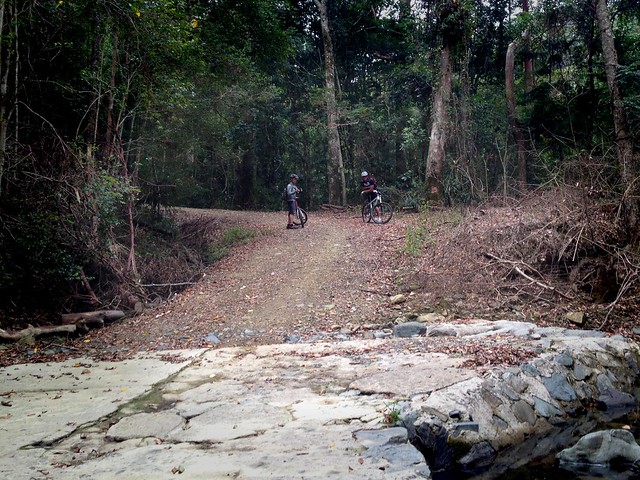 Despite its steepness, Scrub Road a great place to ride or hike, but it’s best done in drier weather. After rain the track becomes muddy and difficult to traverse. 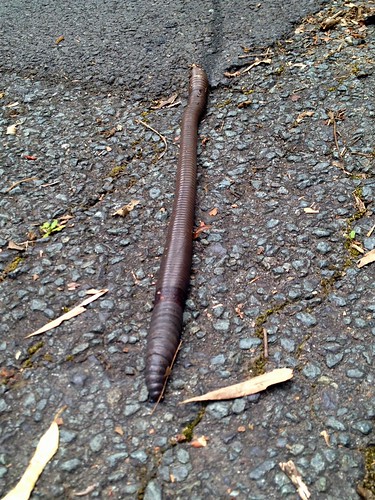 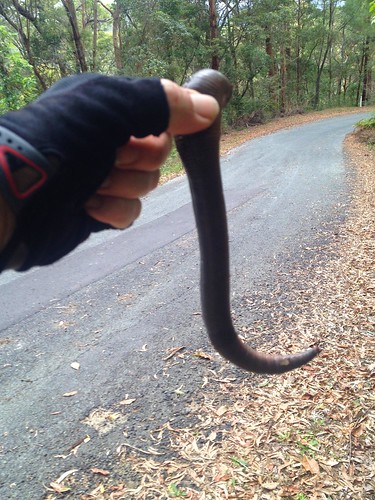 The riders left Scrub Road and followed the paved road towards Camp Mountain. This is another tough climb, but as Becca explained, “The climb up Camp Mountain seemed like a piece of cake after the steep hills at Brookfield”.

Once again, Jason spotted some wildlife on the road – a huge worm / millipede creature, and yelled out to Becca “Don’t run over the slug!!!” (When you’re in a hurry to save something, getting a correct taxonomic identification is not high on the list of priorities).

Luckily, the worm / millipede / slug creature was saved from death by mountain bike tyre, and gratefully agreed to be photographed by Jason. 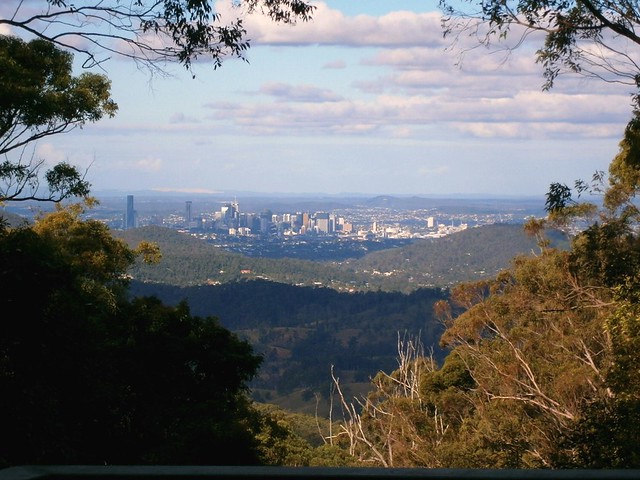 The views from the lookout at Camp Mountain are always spectacular – especially if you’ve worked hard to reach the top. On this day, however, everyone decided to keep riding, and rolled past the lookout towards the “Short Side” track down the other side of the mountain.

Eric explained that a couple of trees had fallen on the track which slowed everyone on the way down. Becca said the short side was “a lot of fun as usual”. I think any mountain biker would agree that it’s much more enjoyable riding DOWN the short side of Camp Mountain than riding UP. 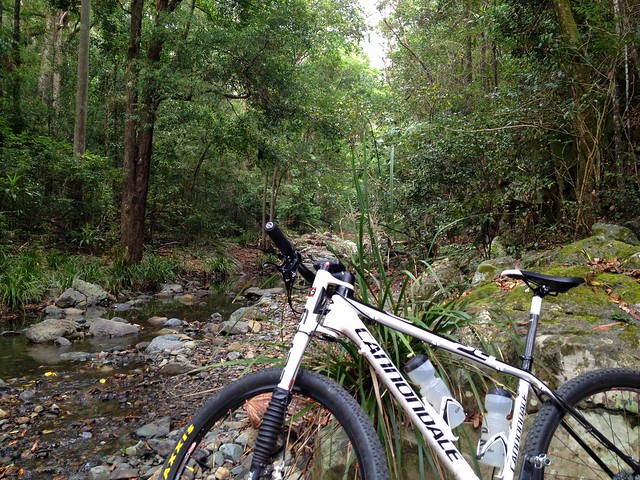 The trails eventually led the riders to the Bellbird Grove picnic area followed by another long climb up the paved drive way to Mount Nebo Road.

“Look out for cars on the way up”, Eric said. “Drivers are usually looking out for a picnic area and won’t see you”.

Ironically, an elderly driver collided with Eric as she passed him. He was ok, and banged his fist on the side of the car as it pushed him off the road. “I’m sorry, I didn’t see you”, the elderly driver explained as she got out of the vehicle.

I suspect Eric was relieved to reach the top of the hill and get back onto the dirt tracks away from the dangers of motor vehicles and careless drivers. 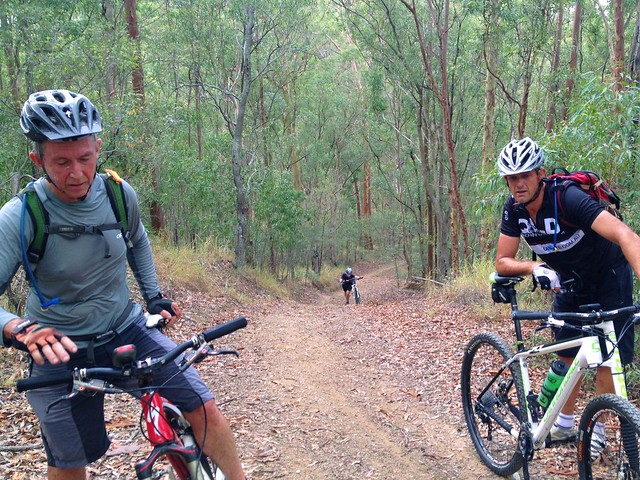 It’s only a 2km climb, but it’s hard work climbing out of Centre Road towards the end of a ride. Eric described it as a very hot and tiring climb. Becca added that because much of the route is in open unshaded terrain this would not be a good ride to do in summer. 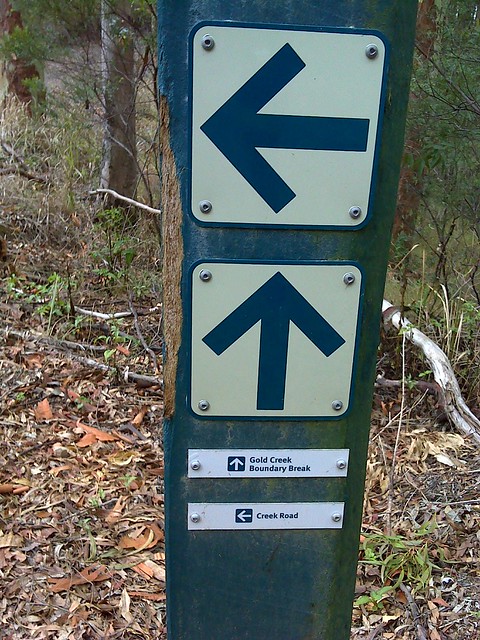 Once they were back on South Boundary Road, Eric, Becca, Paul and Jason headed towards the single tracks at Gap Creek following the “Death Adder” and Boscome Road trails towards Gold Creek Road. Thankfully this final 10km section was mostly downhill, and gave everyone a chance to recover before finishing back at the sports oval at Upper Brookfield.

This ride covered 45km in just over 5 hours. During that time the riders climbed about 1,600m in vertical ascent.

Jason described it as a “hard slog” and a good training ride for anyone wanting to “toughen up” before a race.

Eric said it was “as hard as I had anticipated” and thought that aspirations had exceeded abilities.

Paul said he would have liked more hills. I really hope you were joking, Paul!

And Becca said it was “Fun” and “A good loop if you don’t mind walking”.

Considering these people are some of the toughest mountain bikers I know, I’d suggest you only attempt this loop if you’re very fit.

Congratulations, everyone, on a huge effort. Mostly I am sorry I didn’t get to share it with you. But if I’m honest, part of me is relieved too.

And Becca, in answer to your original question:  No!  You are no dafter that I am 🙂