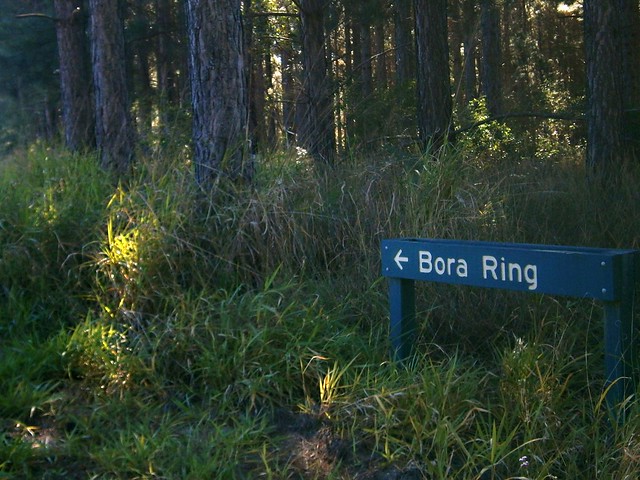 Today’s plan was to ride from Beerburrum in the Glasshouse Mountains to Woodford and back, a round trip of about 70km along mostly dirt tracks and gravel roads.

My first stop was an old Bora Ring on Johnston Road. Boras (or “durns”) were important places used by Aborigines for business, dancing and ceremonies. They consisted of a large circular ring of earth connected to another smaller ring situated between 100 and 400 metres away. Only one ring remains of the Beerburrum Bora Grounds. It’s on the edge of a pineapple field, so presumably the second ring was demolished when the farm was built. 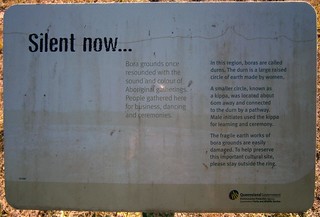 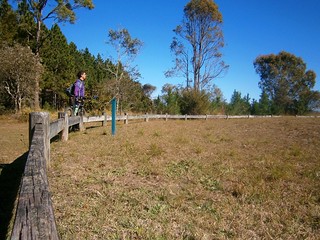 I’ve been lucky enough to see a few Bora rings, and am always overwhelmed by strong emotions when I imagine what it must have been like to witness such a colorful and powerrful event so long ago. Perhaps somewhere the echos of those songs and dances are still ringing. 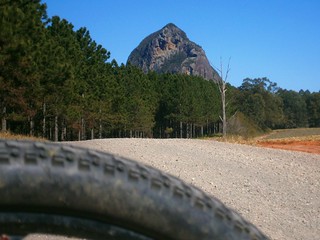 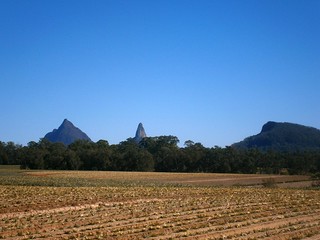 And with the imposing rocky visages of the mystical Glasshouse Mountains staring at me from across farm paddocks or from between gum trees, I made my way up to the lookout so I could enjoy the view.

I wasn’t disappointed. The air was so clear today I could see all the way past brooding Tibrogargan to the sand dunes on Moreton Island.

I’ve ridden to the lookout many times, and would normally head north at this point towards Beerwah. But today I kept going west through state forest and pine plantations towards Woodford. 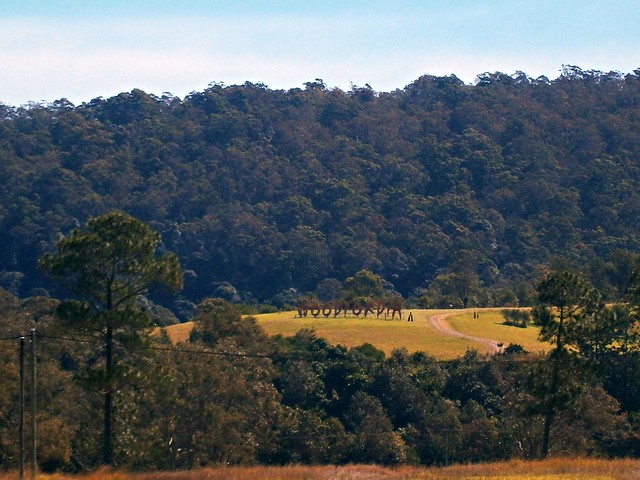 Woodford is famous for its annual folk festival at “Woodfordia”. It’s a colorful celebration of song, dance and culture that’s normally held in the Christmas – New Year period. 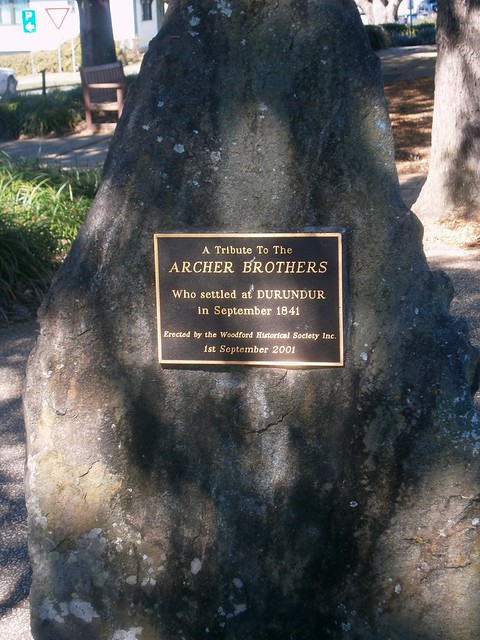 The first European settlers in the area were David, Thomas and John Archer (the Archer Brothers) who built Durundur Station in 1841 near the upper reaches of the Stanley River. As a mountain biker, I am grateful to them because they established the “Old North Road” between their farm at Durundur and Brisbane. I have a lot of fun riding my bike along some of the remnants of that road at Dunlop Lane and Smiths Road in Kurwongbah where it’s still a dirt track. 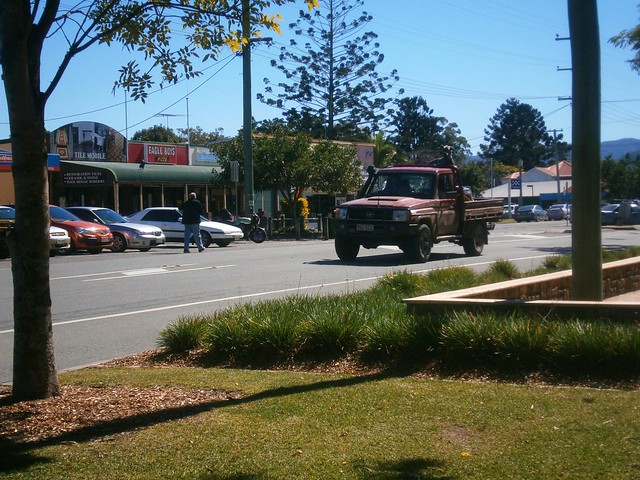 Today the bustling town of Woodford was an ideal spot to stop for a bite to eat as the half-way point of my journey. 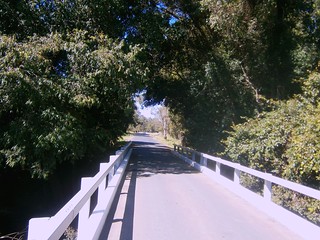 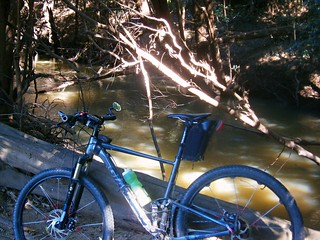 As I rode north out of Woodford, I thought I’d stop and take a quick look at the Stanley River. It starts near Maleny up in the Blackall Range, and flows through Woodford before eventually joining the Brisbane River. Before the Archers built the Old North Road, the only way to Woodford from Brisbane was in a circuitous route west following the Brisbane River and then following the Stanley River north east. 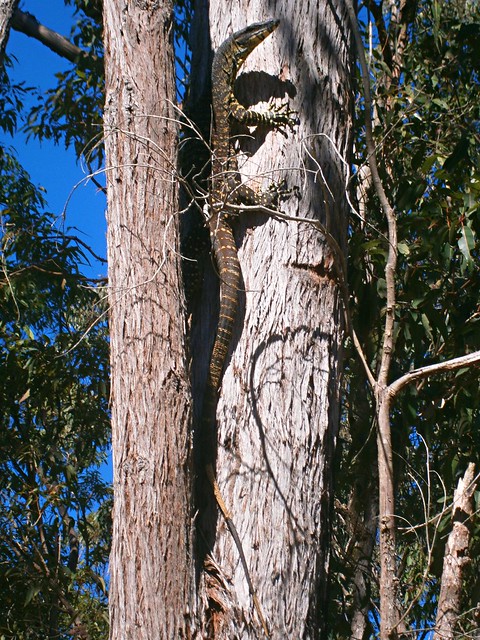 This two metre long Goanna scurried across the track in front of me while I was riding. “Aren’t you gorgeous!!!” I yelled out as I stopped the bike and got the camera out. Unfortunately I think I must have scared him because as I tried to get closer to take the photo, he just climbed higher up the tree. 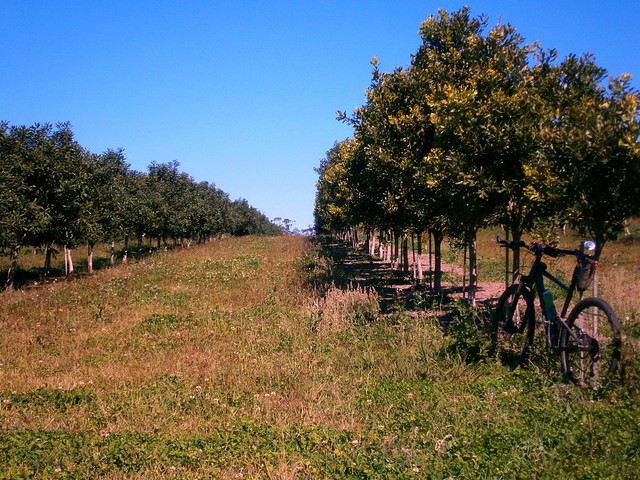 The road I was following, Dunning Lane, came to an abrupt end near an orchard. My GPS told me to go straight ahead (into a thick clump of trees). I decided to disobey it, and decided to ride through the orchard instead. This took me a couple of km off course, but I was able to correct it by making my way towards a powerline easement on the other side of the orchard. Hopefully someone will be able to point out where I went wrong. 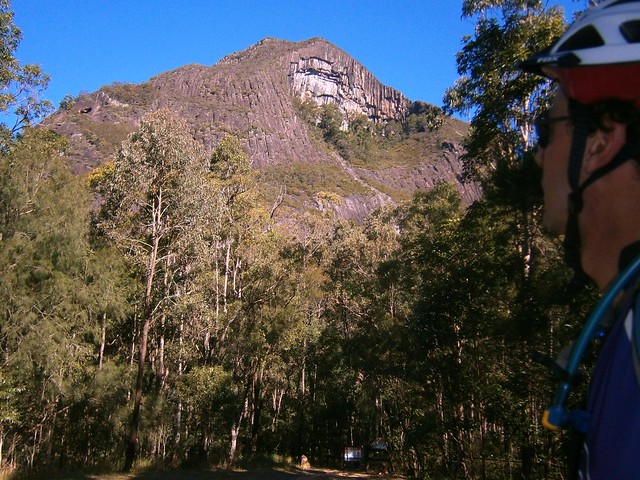 The last part of the trip was around the back of Mount Beerwah under what locals call “The Organ Pipes”. The mountain looks impressive up close.

I got lost a second time in Luttons State Forest – the small forest between Mount Beerwah and Old Gympie Road. There are a number of really steep descents there, and I was unsure of which one to take. The track I eventually rode down was so steep and had such large drop-offs that I had to walk the bike down the hill in some spots. For the rest, I just hung my backside out as far over the rear wheel as I could and hoped for the best. It’s amazing how stable the bike feels when you do that 🙂 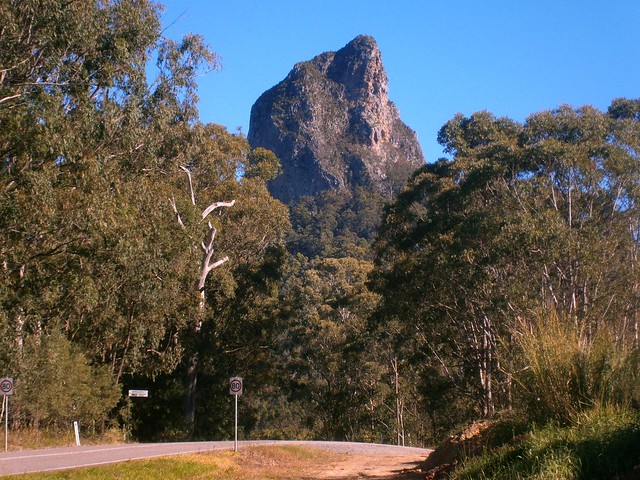 On the way back to the car I stopped for one last look at Coonowrin. For the first time he looked almost life-like – a rocky giant looking down at me over his right shoulder. It made me wonder whether the dreamtime legends aren’t just legends and perhaps these mystical mountains are titans made of stone.

This one rates 7 out of 10 on the tough-o-meter. There are a few steep-ish hills, but nothing that would prove too difficulte for the average rider. Just take it easy going downhill in Luttons forest!