After enjoying a long solo ride through the Scenic Rim a few years ago, I wanted to return to one particular section with friends so they could appreciate it as well.

We started the day a couple of kilometres east of Beaudesert, and pointed our bikes up a quiet gravel road.

It took us about twenty-five minutes to climb Birnam Range Road, a moderate ascent with some great views eastwards of the Tamborine Plateau. 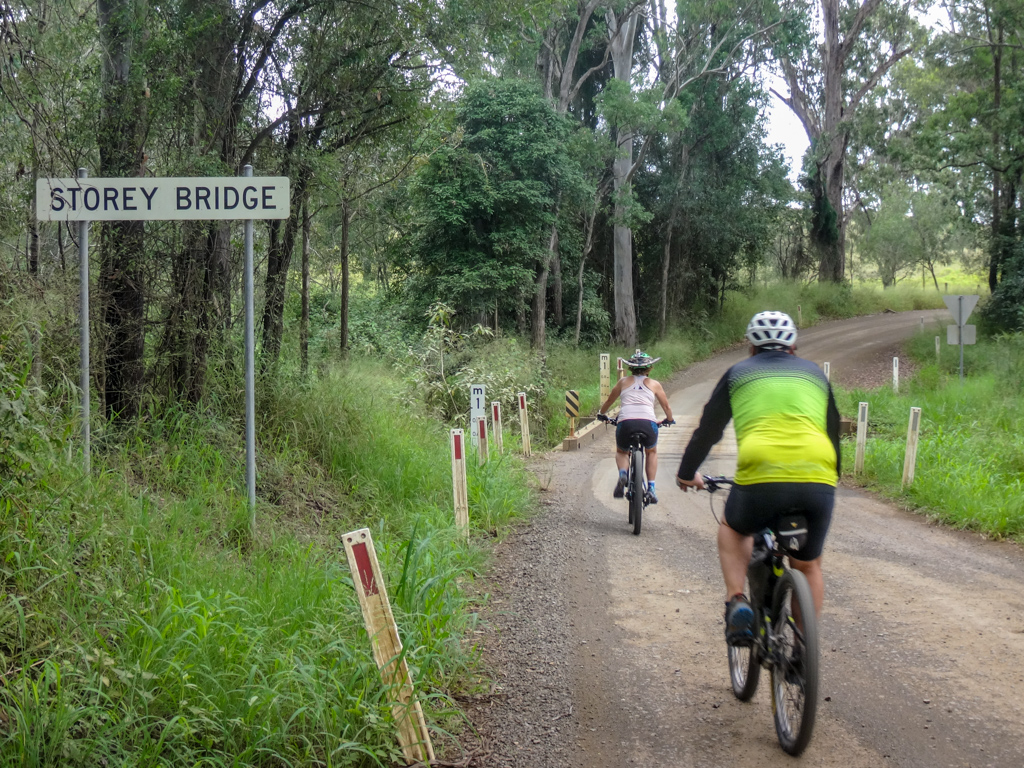 At the top, we turned right and rolled down Flagstone Creek Road and over a more remote “Storey Bridge” than the one most Brisbanites would be familiar with.

Mountain Bikers love riding on dirt.  Our dog-leg shaped course up and down the hill reduced the amount of time we had to spend on busy Beaudesert-Nerang Road. 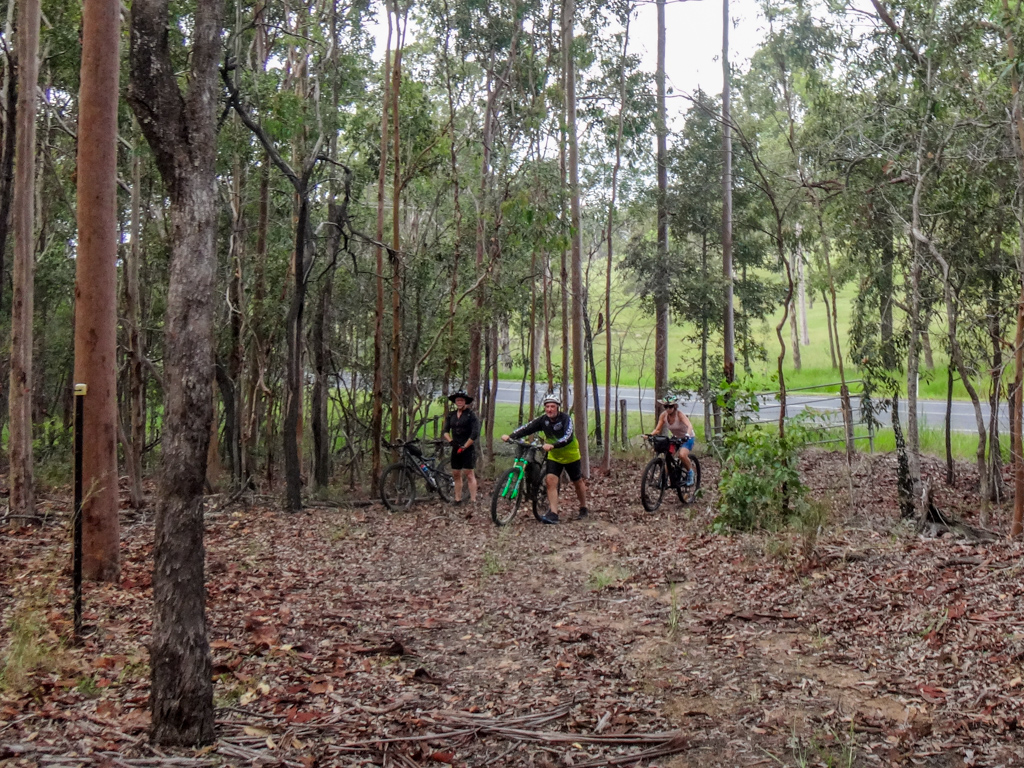 We followed paved roads for a few kilometres until we reached Birnam Range Reserve just off Mundoolin Road. 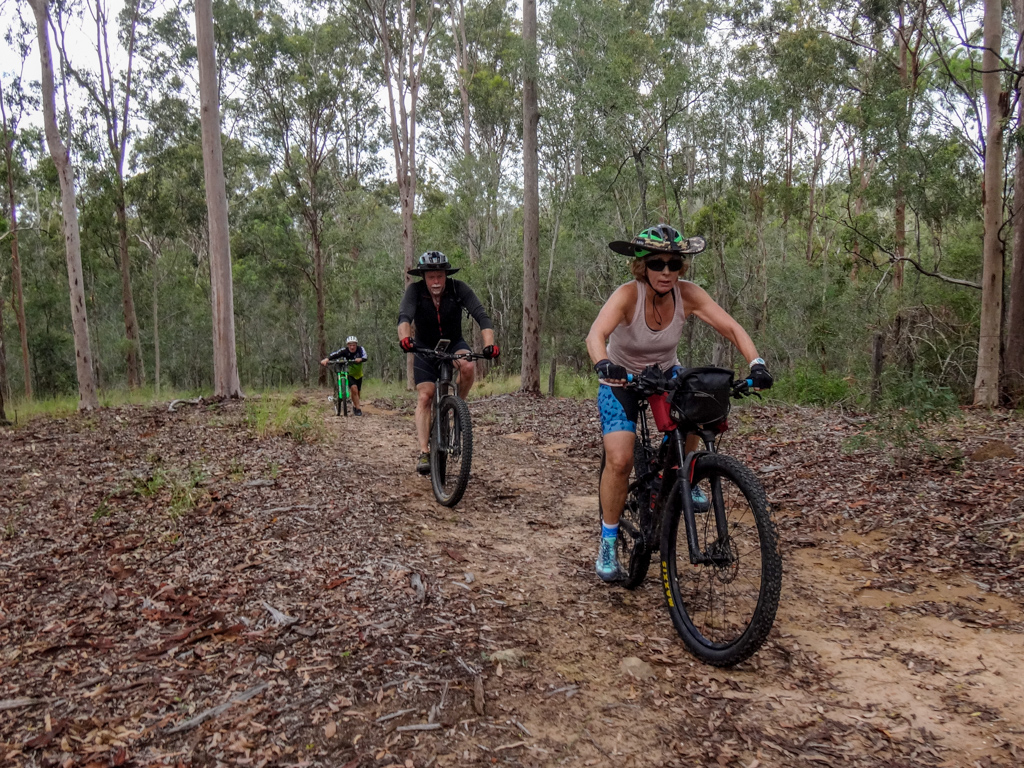 Riding over the leaf-covered muddy track up the hill through an open forest of spotted gums, we felt relieved to leave the busy paved roads behind.

“We’ll be riding through here for the next hour or so,” I mentioned to Jason as he rode past me. 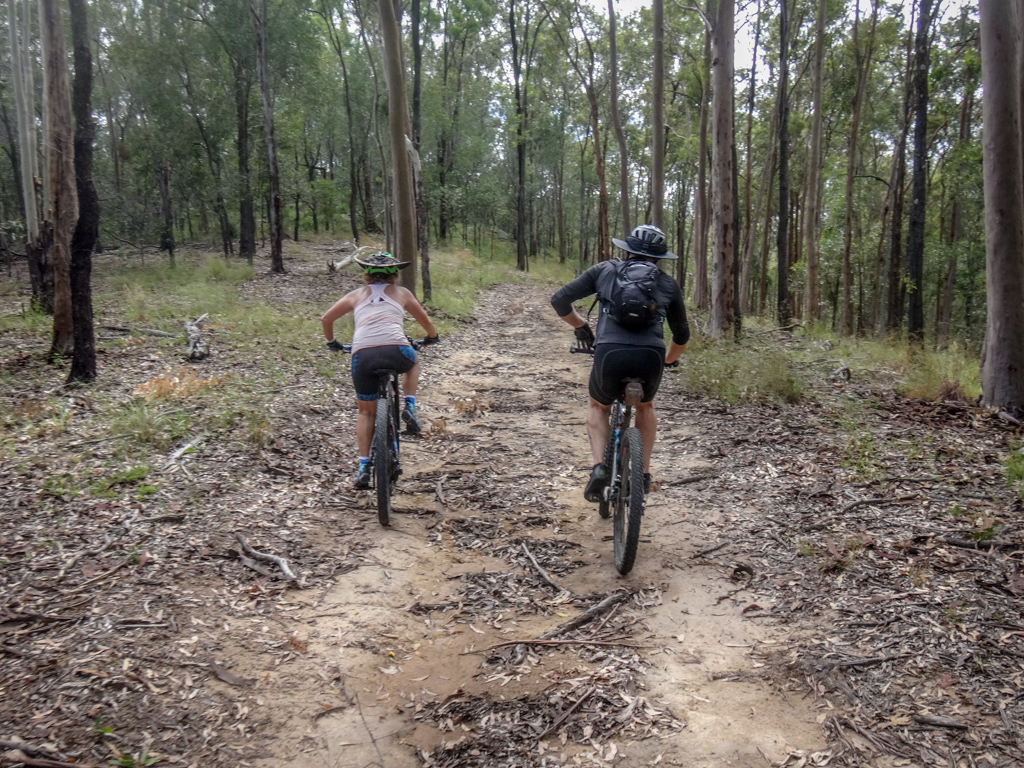 Kaye and Jason are strong riders.  They slowly edged away from Simon and me. 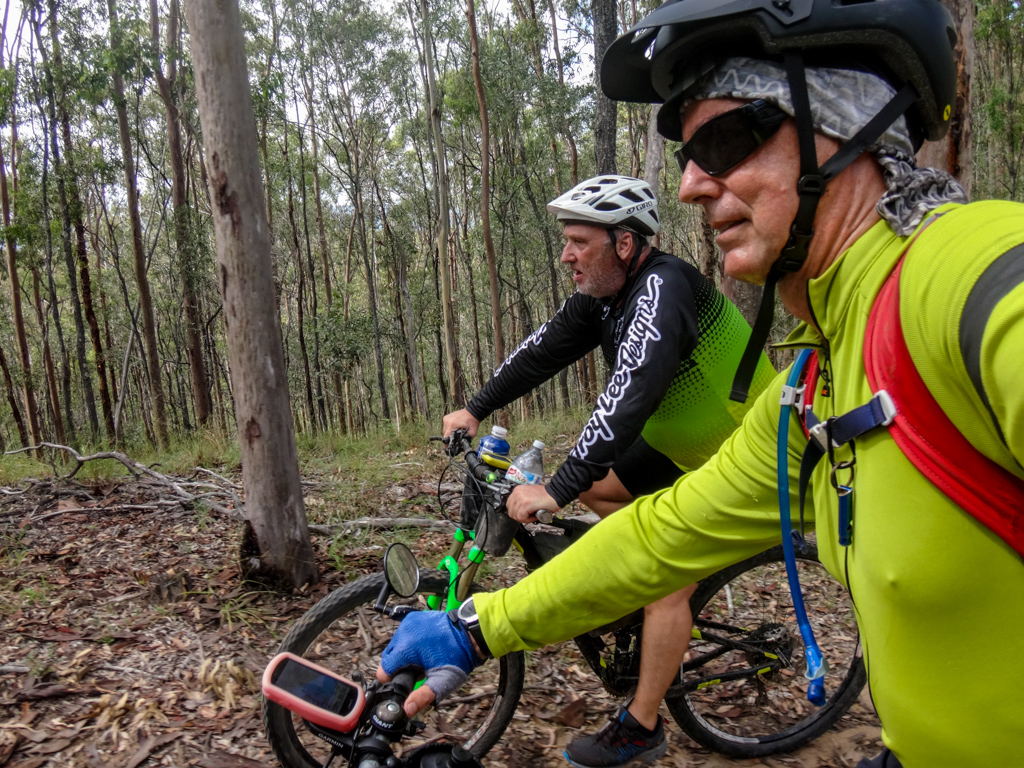 We plodded on together, talking about work, politics, future plans, anything at all…

Often when I slowly turn the pedals, my mind enters a strange Zen-like state.  When I’m alone this sometimes causes me to have strange conversations with myself – usually out loud.  When I’m with friends the conversations twist and turn like the tracks we’re riding on.  The words don’t matter as much as the rhythm of bouncing ideas back and forth between friends.

It’s a wonderful mental state to be in, and magically seems to make the tough climbs easier. 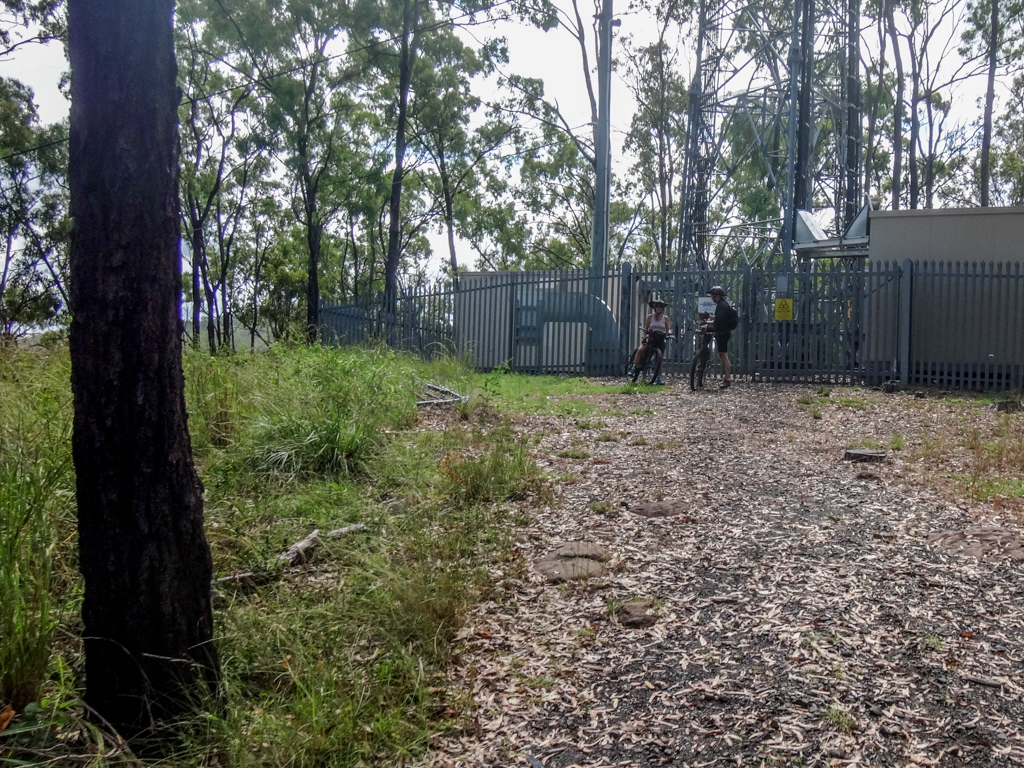 At a communications tower on the summit, Kaye and Jason waited patiently for us to catch up with them. 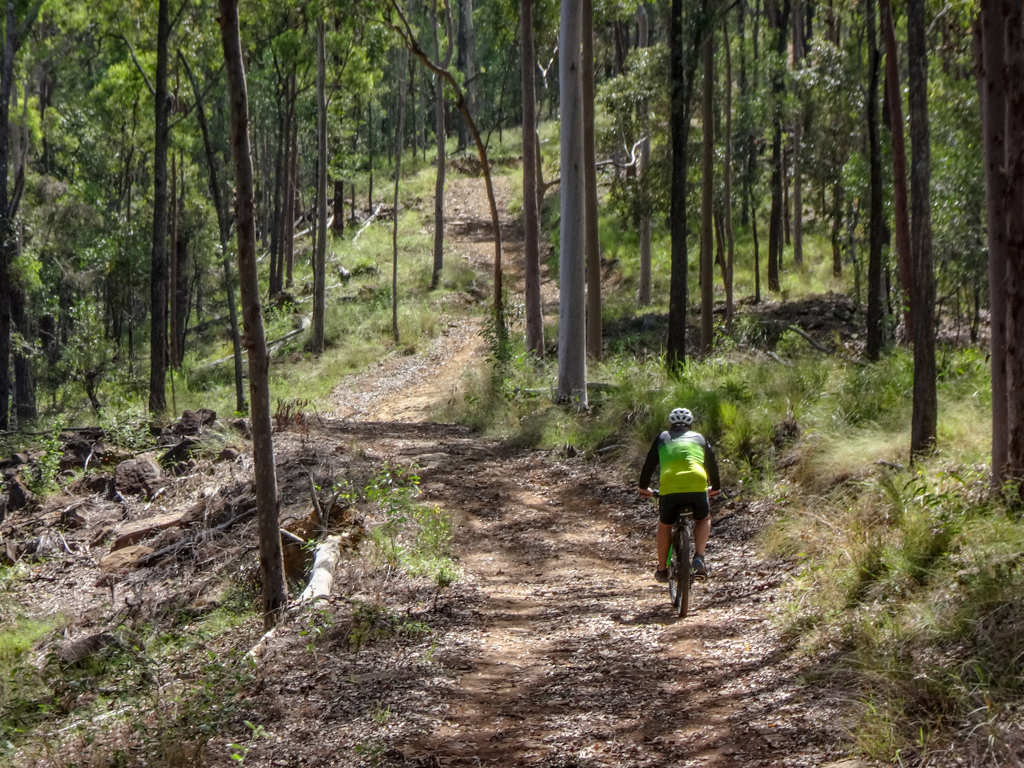 It felt pleasant to coast downhill for a while, but my GPS kept nagging me that a couple more steep sections loomed ahead. 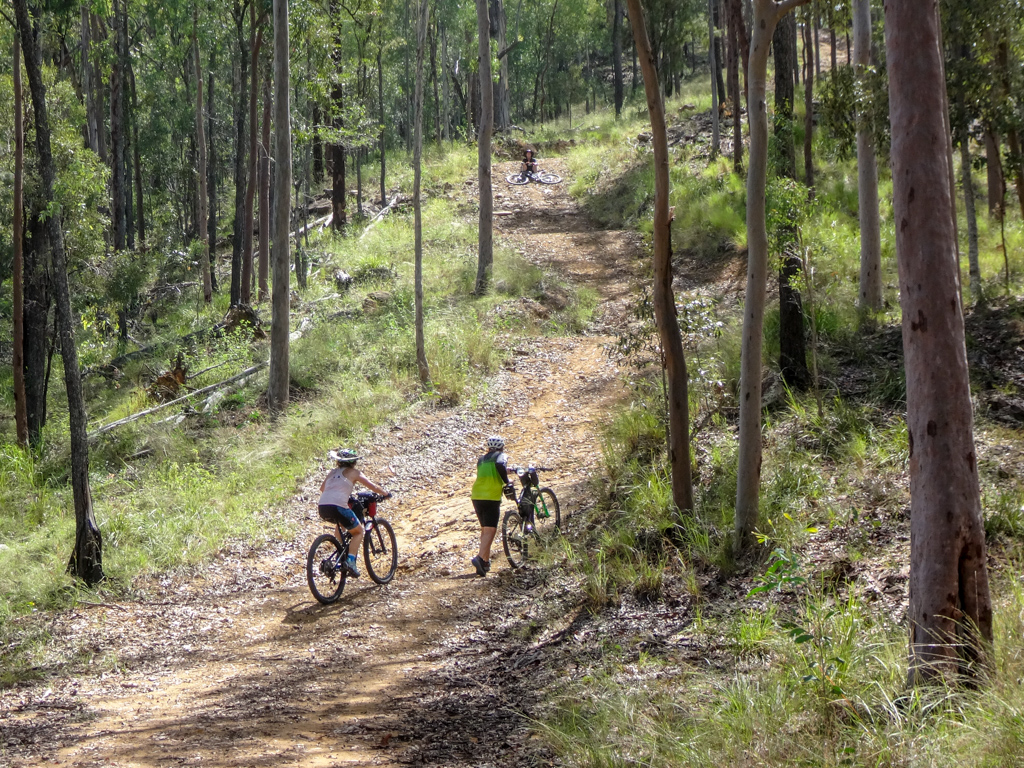 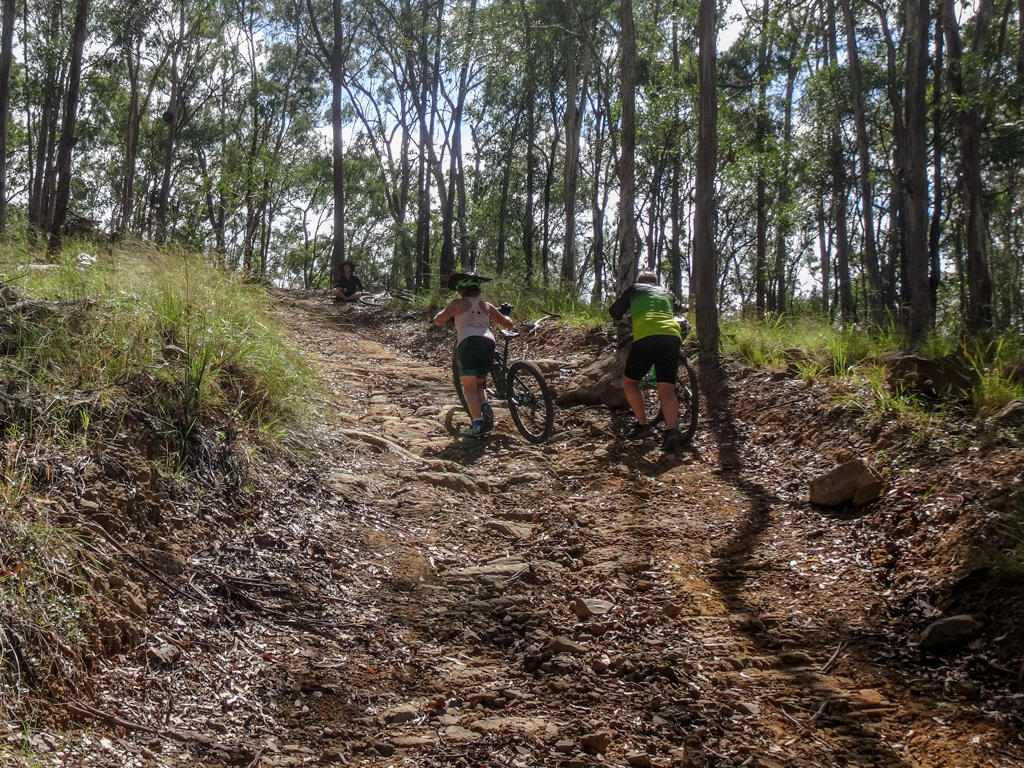 Jason sat at the top of each hill, watching the rest of us labour upwards, pushing our bikes. 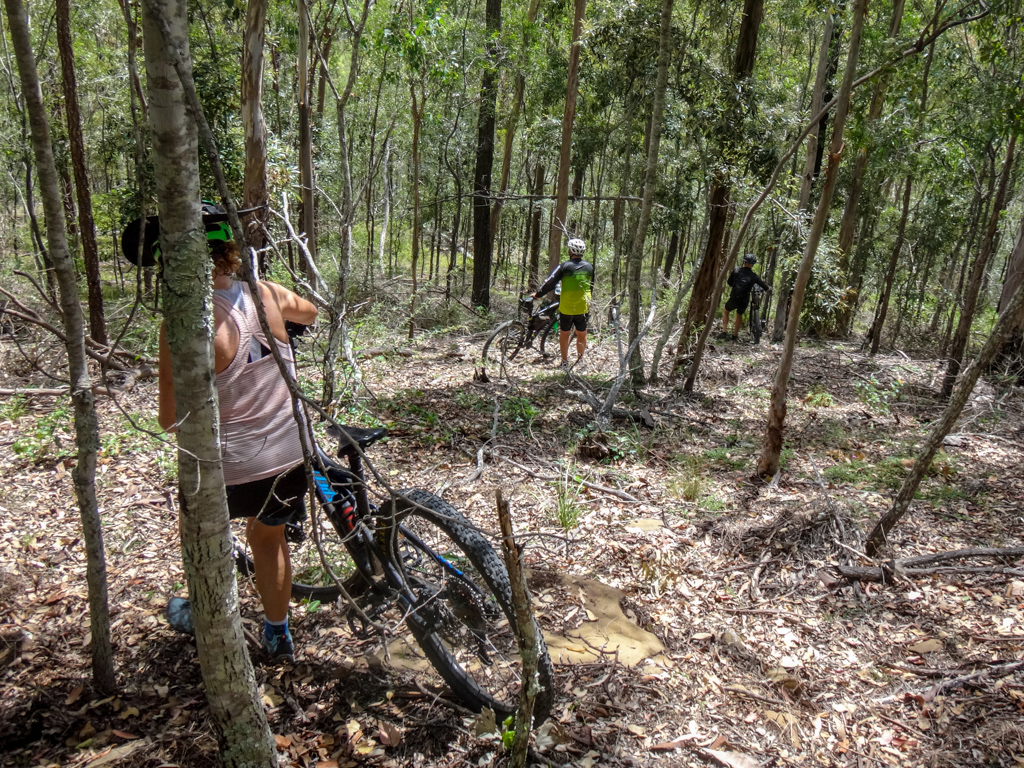 And then we got lost. 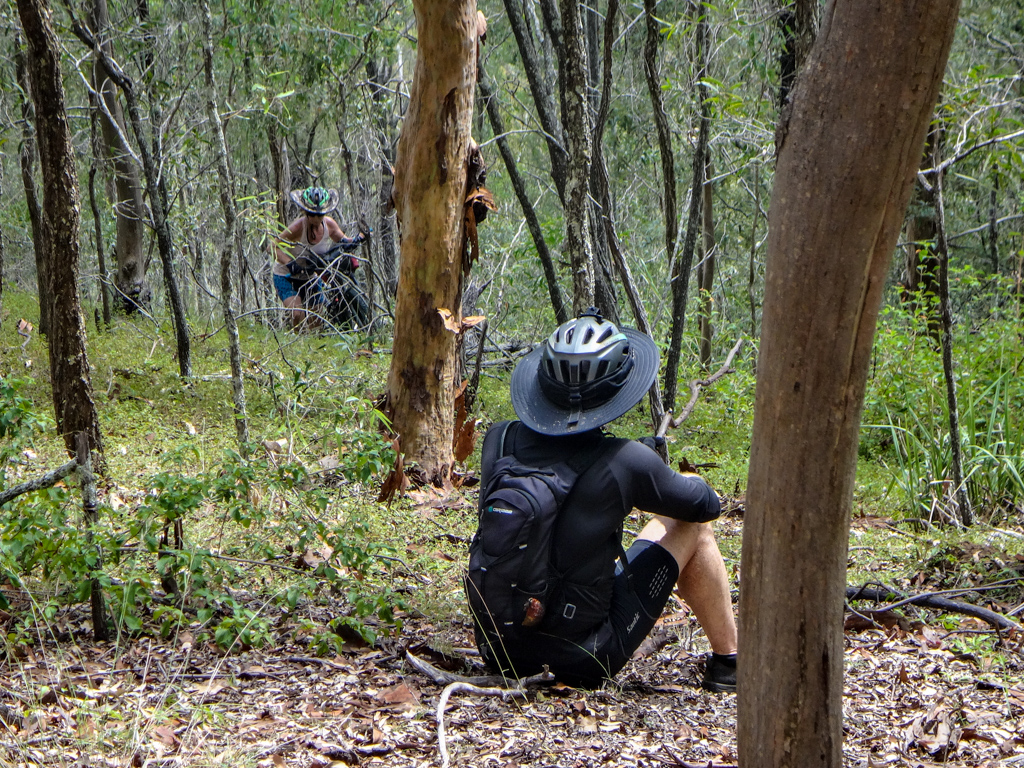 It was my fault.  I had plotted the course based on what I had seen from aerial photos, and missed the actual turn-off by about one hundred metres. 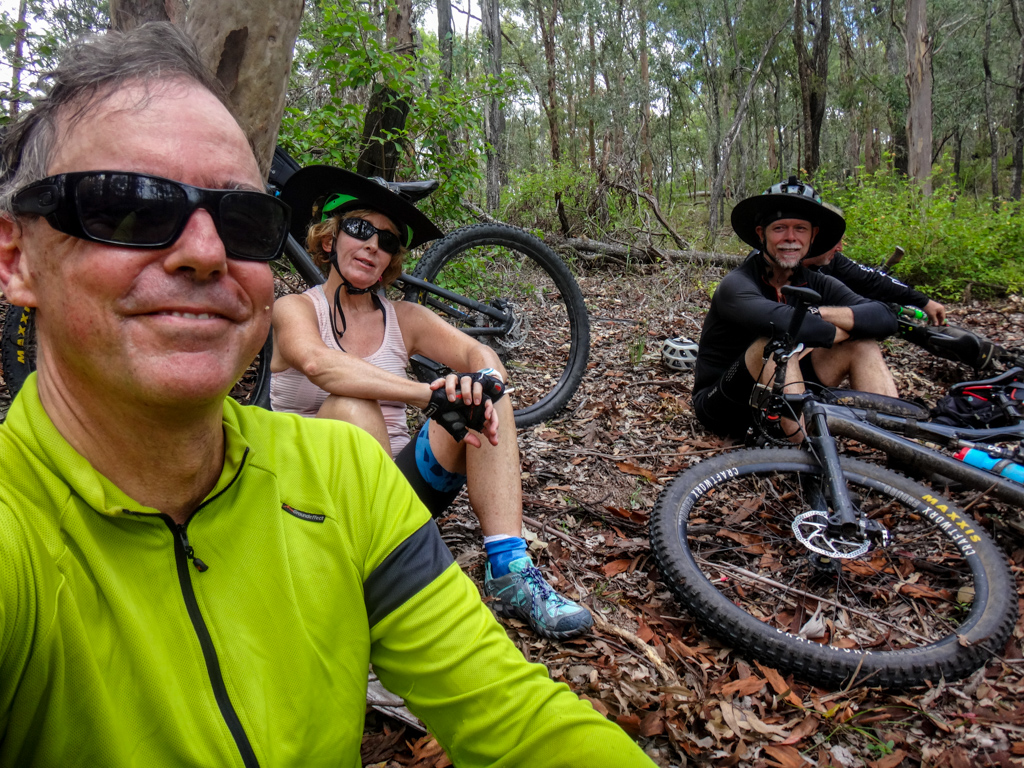 We bush-bashed through the hillside scrub for a while, laughing at ourselves, then stopped for a break. 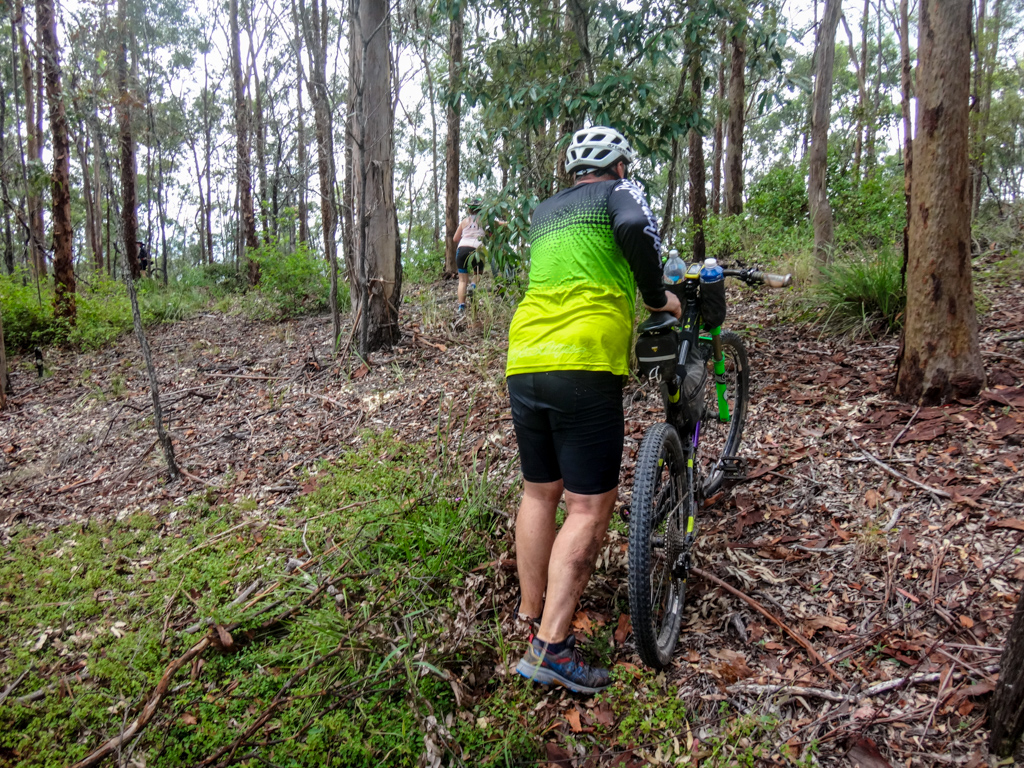 Instinct suggested we head to a nearby ridge.

We did, and quickly found the track again. 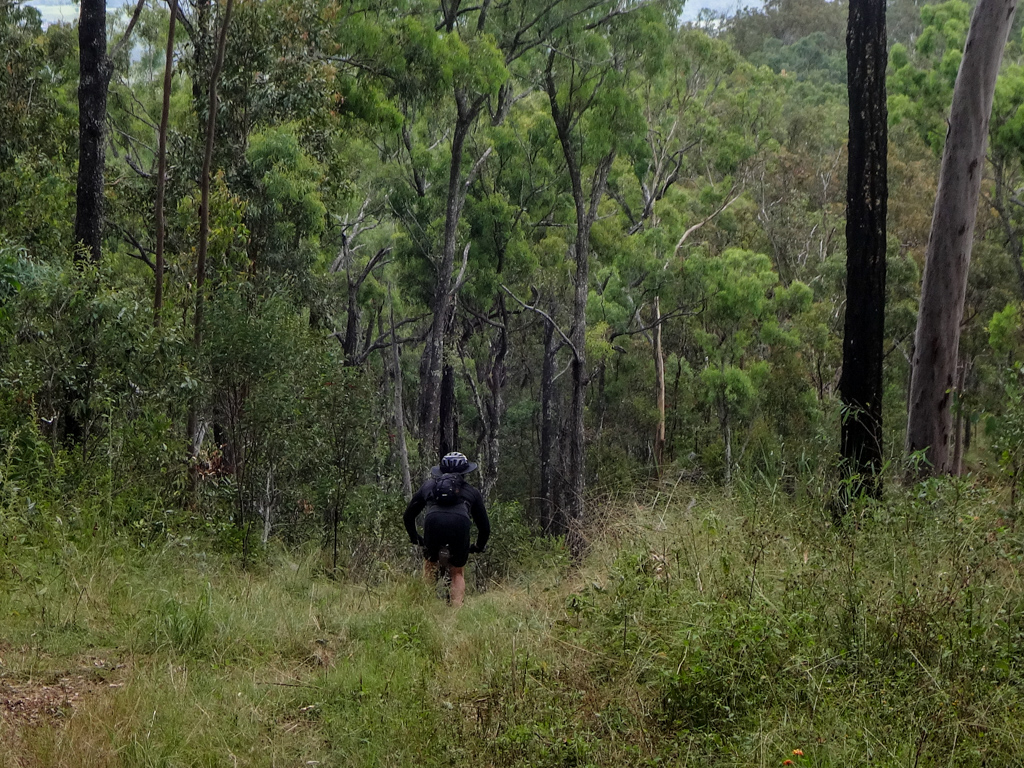 I didn’t realize it at the time, but we had made a second mistake.

This was a pleasant track, but we had left the reserve and had strayed on to private property. 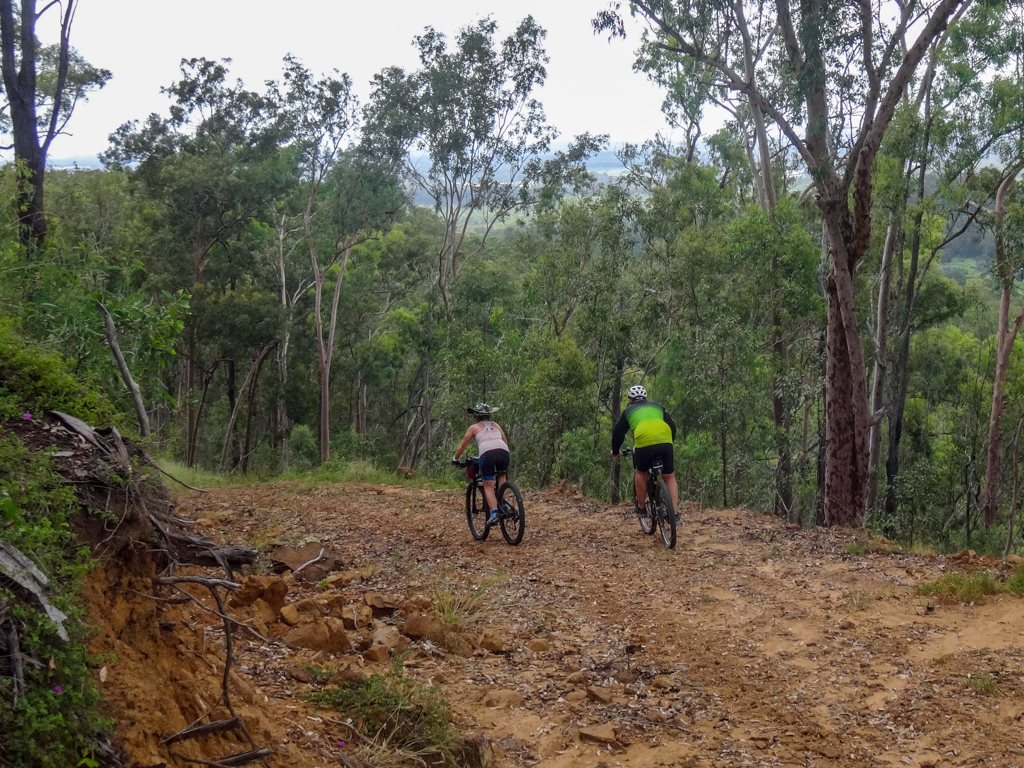 We weren’t supposed to be there, we didn’t realize, but it was a lot of fun.

A steep fire trail led us down the hill and back to civilization. 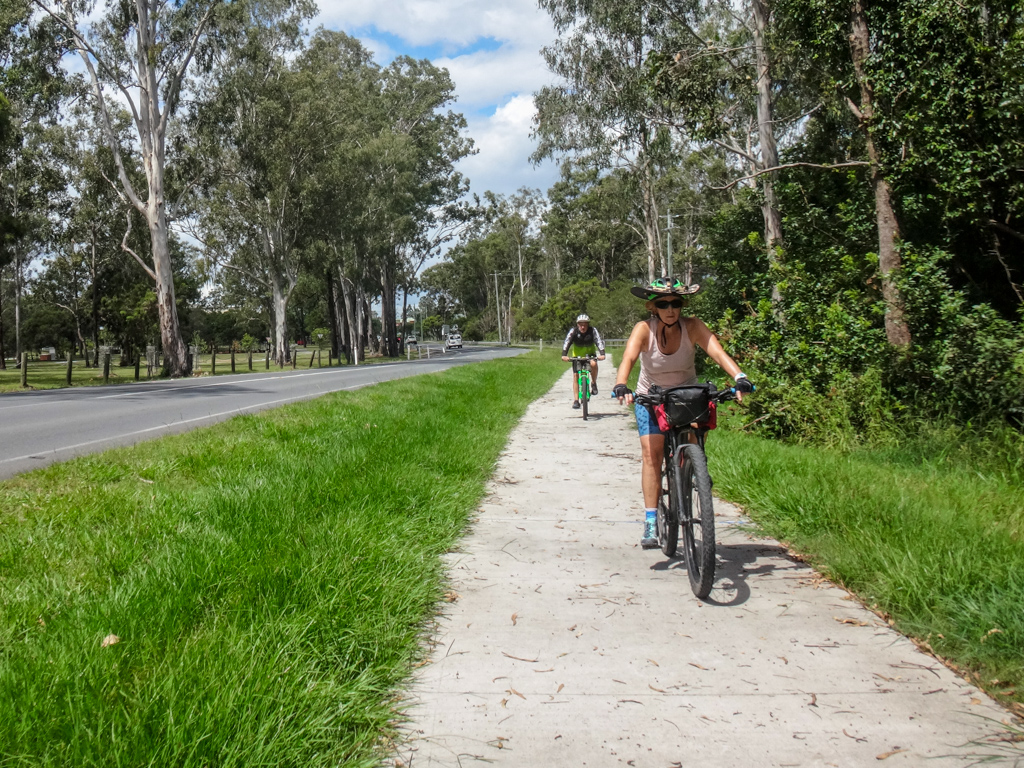 We followed quiet roads and bike paths into Jimboomba, and continued west towards more tranquil back-roads. 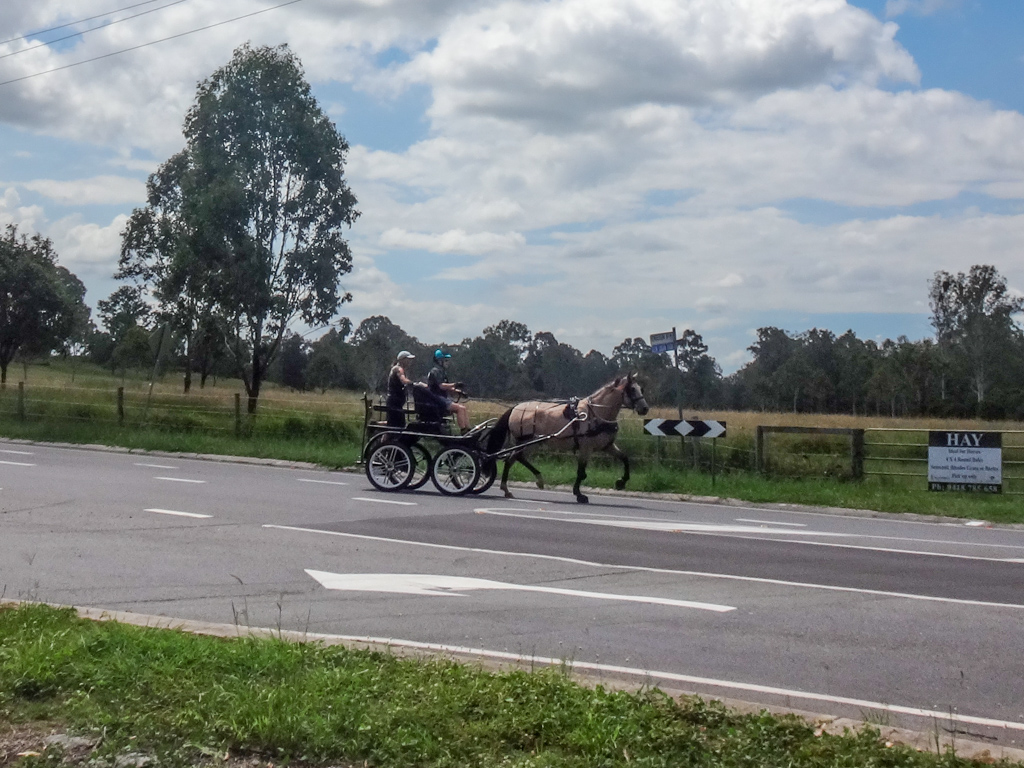 Apparently, other people had the same idea too.

Where possible we stuck to the grassy verge adjacent to Cusack Lane to avoid traffic. 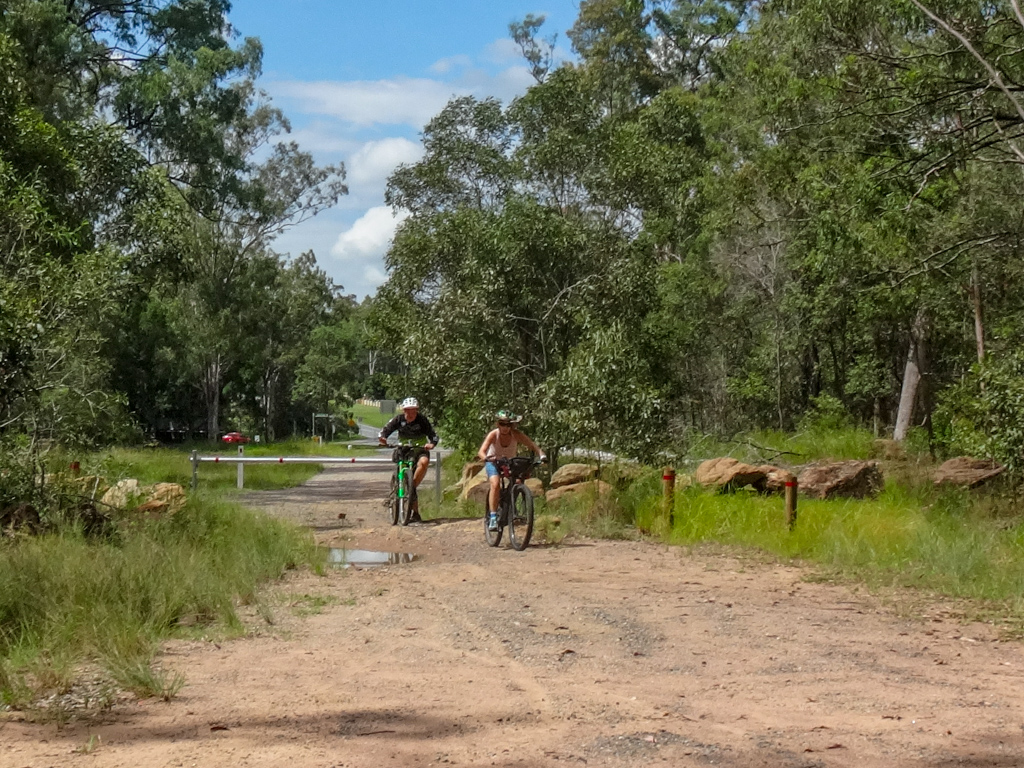 Eventually we reached Teviot Road – a beautiful long stretch of dirt and muddy puddles that someone had thoughtfully left intact after developing the nearby new housing estate at Flagstone. 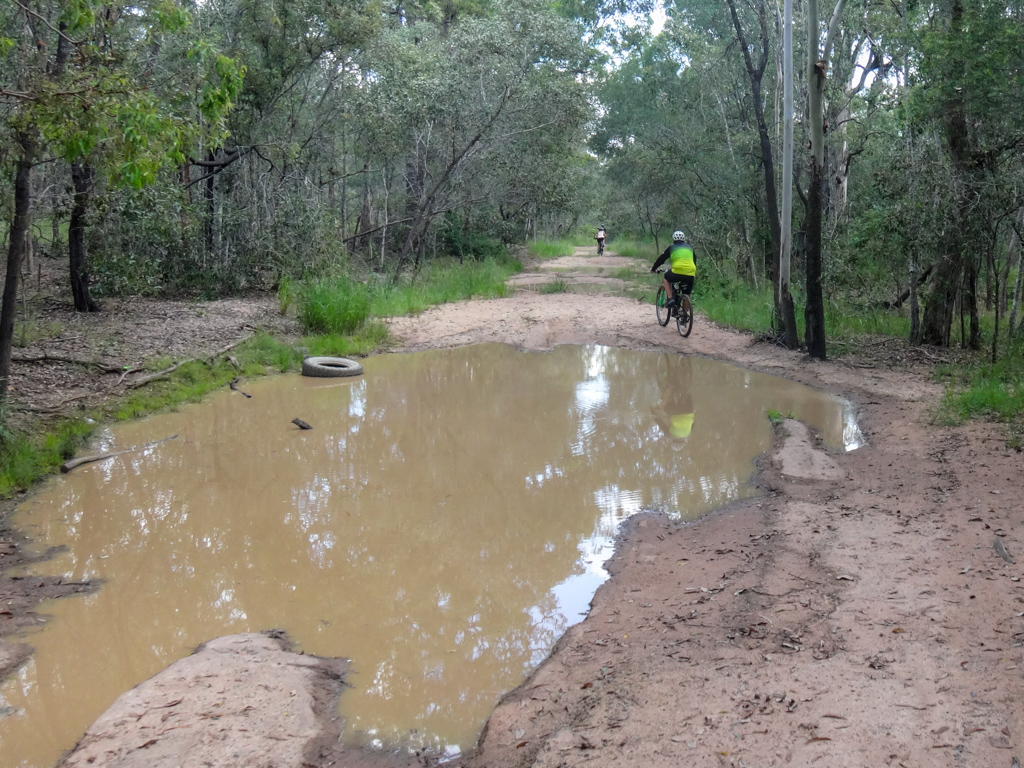 I relived childhood jaunts in the bush from decades ago as we swerved around the deep muddy pools.  I love places like this.  So did nine-year-old Neil.

A few kilometres later, in Brooklands, Kaye recognized a driveway.

“Isn’t this the place where you took a photo of me on one of our rides a few years ago?” she asked as we crested a hill.

Secretly, I was glad to have the opportunity to stop for a few minutes.  My legs were feeling sore.

I nodded and agreed to re-enact the photo. 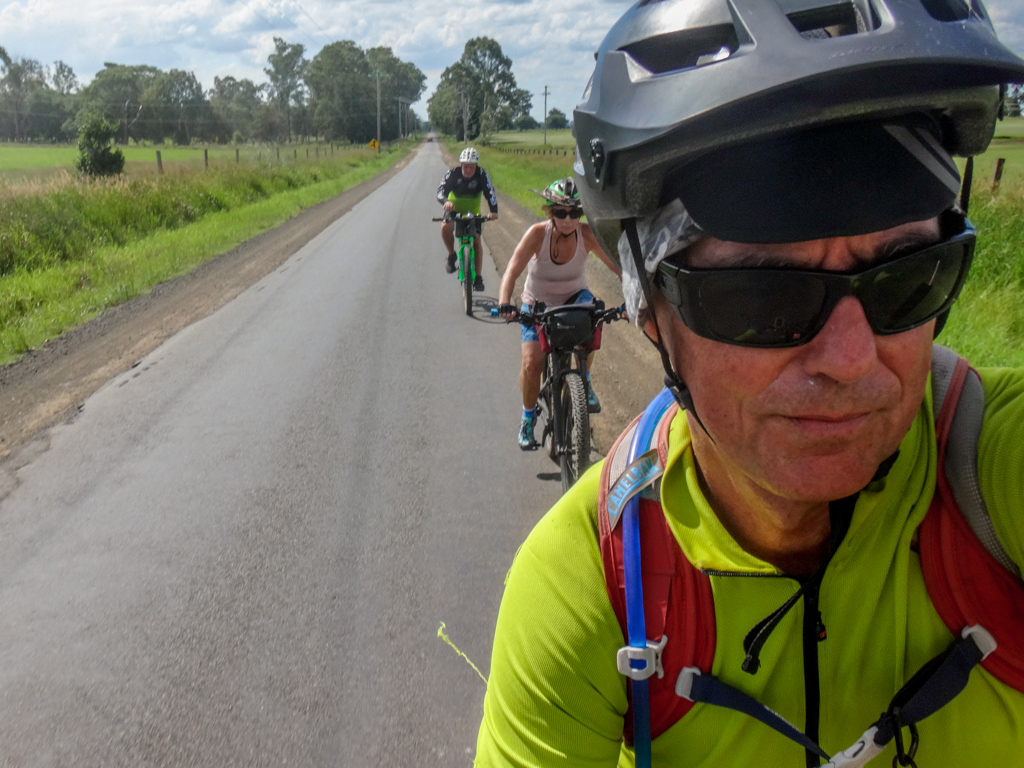 We continued south into a headwind.  It had been over six hours since we started and I slipped into that steady mesmerizing rhythm that cyclists often enter when they’re starting to feel tired.

I love the way our minds make tedious jobs easier. 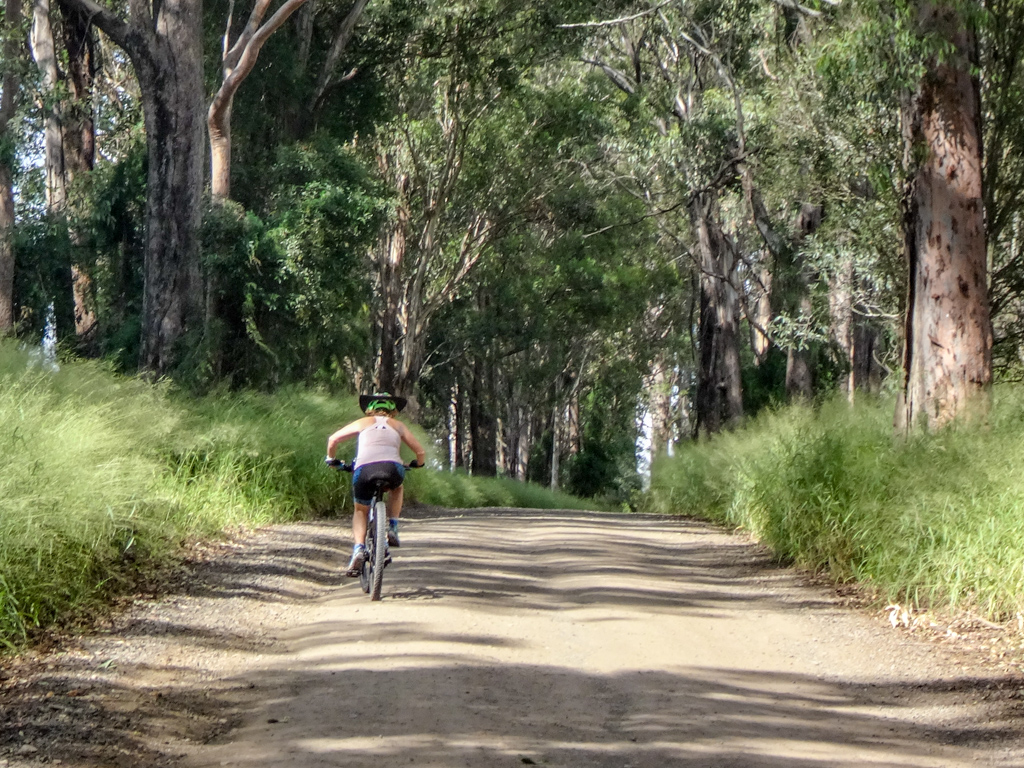 We neared the end of the ride and climbed Gould Hill Road. 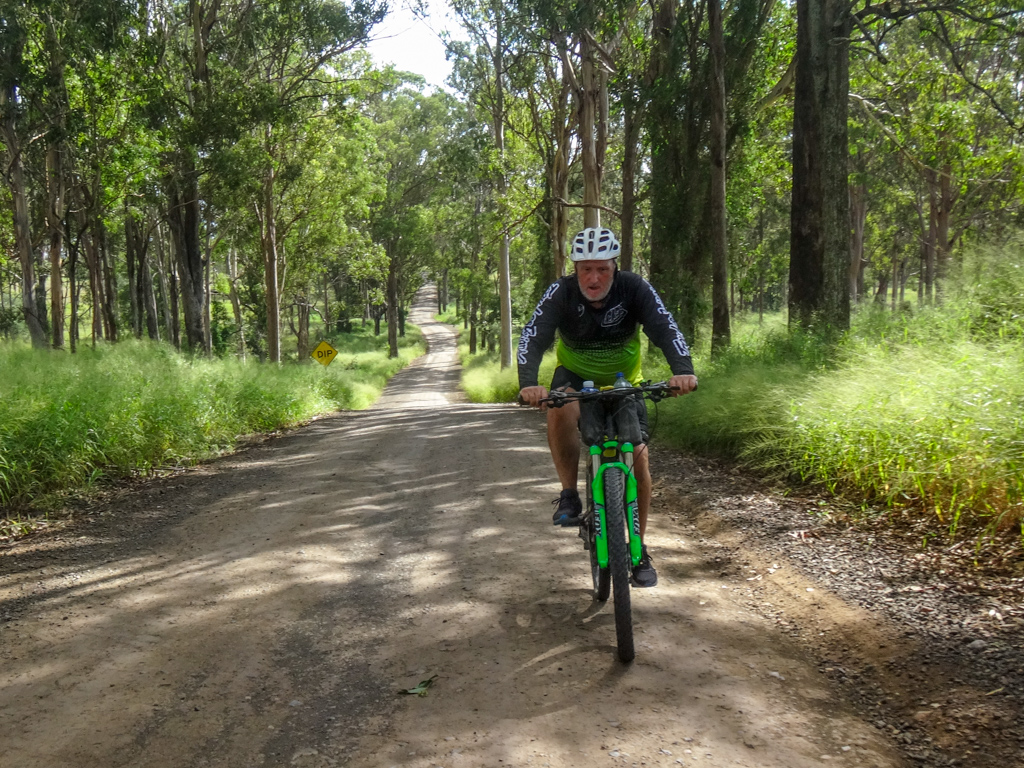 One final climb before the end.

Jason was miles ahead of us.  Kaye was almost out of sight ahead of me.  Simon and I slowly made our way home. 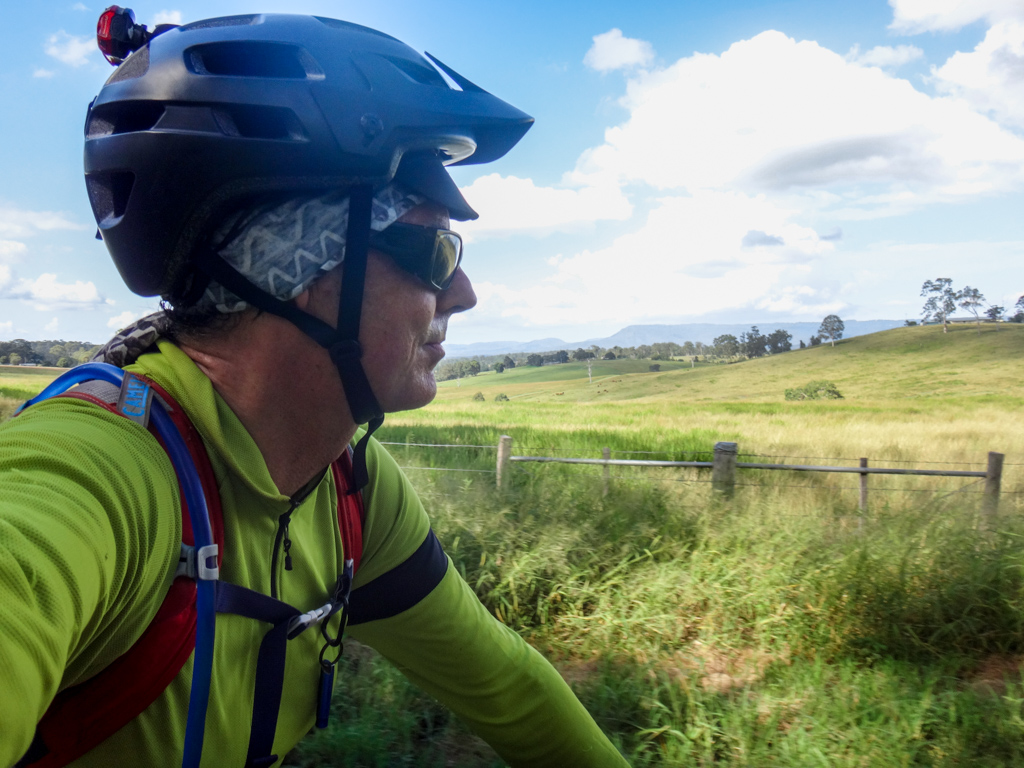 I looked out over the paddocks at the top of Birnam Range Road.  Sore but happy, I was glad to be here.

We rode about 77 kilometres in just over seven hours.

During that time we climbed about 1,200 metres in elevation, and I burned about 4,000 kcal.

I’ll rate this one 8.5 out of 10 on the tough-o-meter.  Lots of up and down, with a couple of really steep bits in Birnam Range Reserve.  Add another point if you try this one in summer.

Make sure you avoid straying on to private property between the northern end of Birnam Range Reserve and Travis Road.

Thanks Jason, Kaye and Simon for a fun day out. 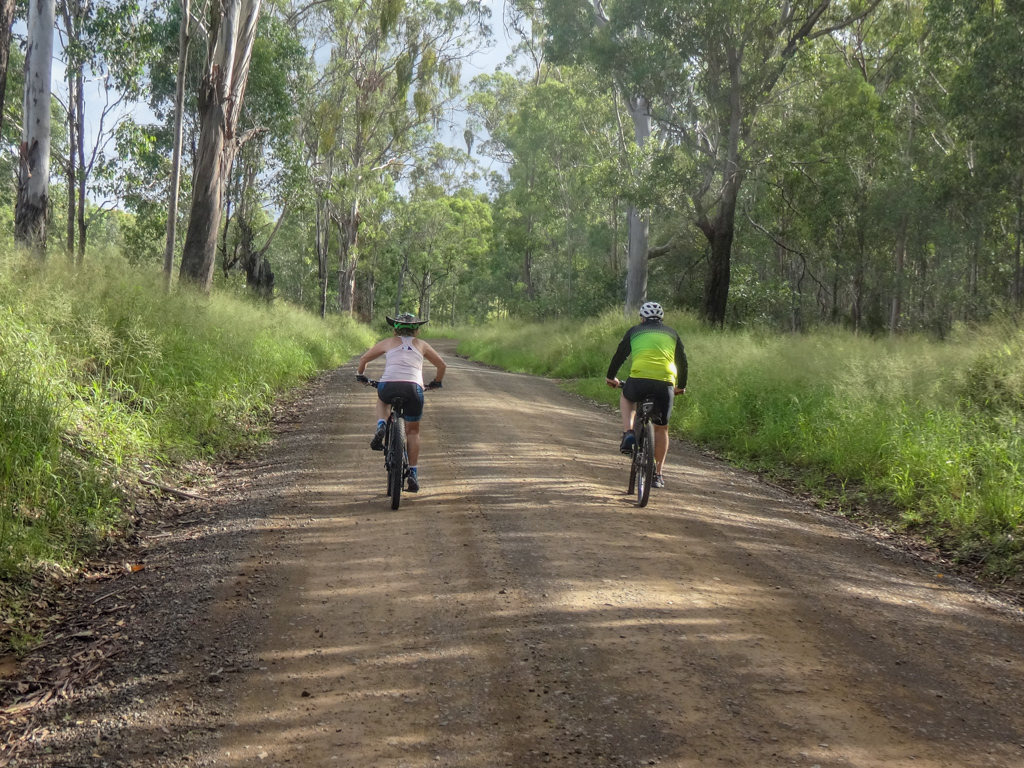