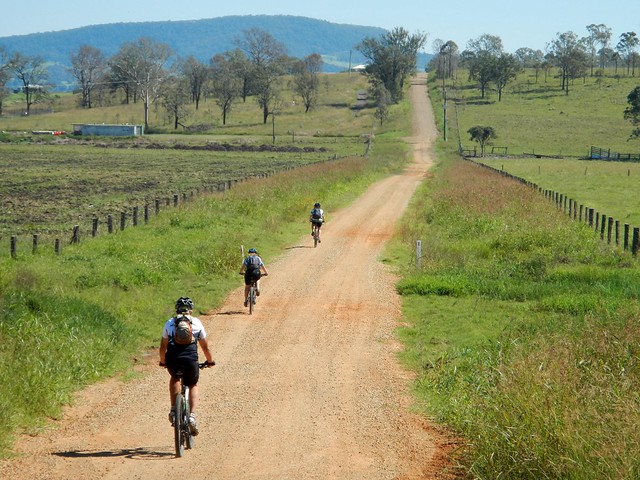 Have you ever made a mistake, only to discover later that it’s lucky you did because it actually saved you a lot of heart-ache?

That happened on our ride to Boonah today.

Our aim was to start at Peak Crossing, head south towards Boonah along some quiet gravel and bitumen roads, then head back to Boonah via the Western Trailhead at Mount Joyce. The added bonus of this ride is that it would link up a lot of disconnected rides on my map at the same time.

The only problem was that we took a wrong turn, and accidentally ended up doing our proposed loop in reverse (thank goodness). 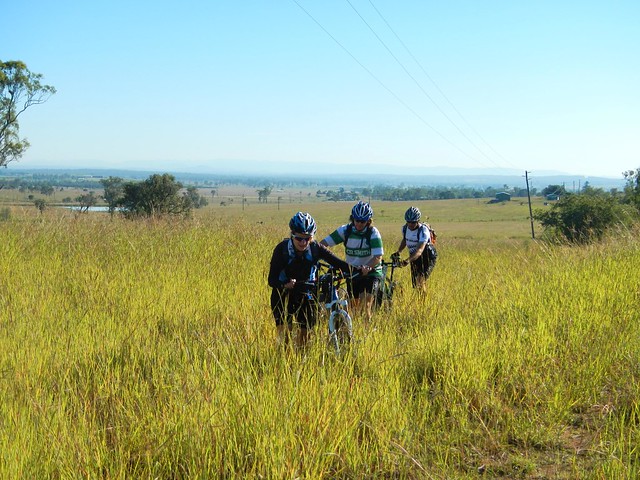 We followed the course along a quiet paved road, which turned into a quieter gravel road (“Oh this is nice” I muttered), which devolved into a disused vehicle track, which eventually degenerated into an overgrown unrideable “track” complete with soft sticky mud. 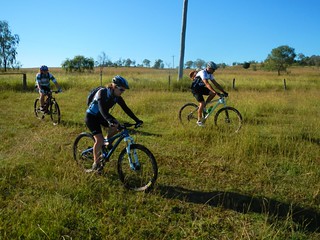 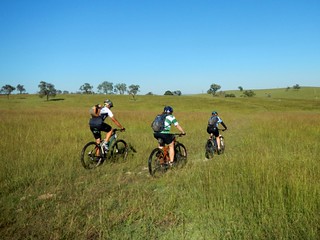 To get away from the mud, we tried a detour along a track in an adjoining field – but the track disappeared and we had to get back into the quagmire. 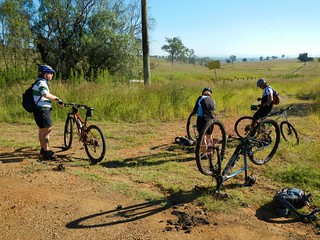 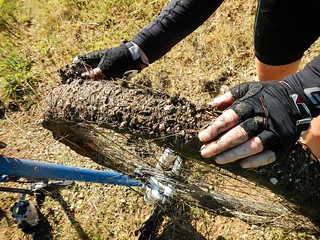 Eventually we got back to the comfort of a wide open gravel road, and were able to clean the bikes up a bit.

This wasn’t your ordinary mud. Normally, when my tyres get mud on them, I ride through the grass. This usually knocks the mud off. But in this case, the grass combined with the mud to make the raw materials for mud bricks. When we pulled at it, it came away from the tyres in a thick continuous layer like … mud cake. I’m sure if we had let it sit in the sun for a while we would have had a few bricks with which we could start building a house.

“Sorry about that, guys” I said. And then optimistically: “It should be a bit better now”. 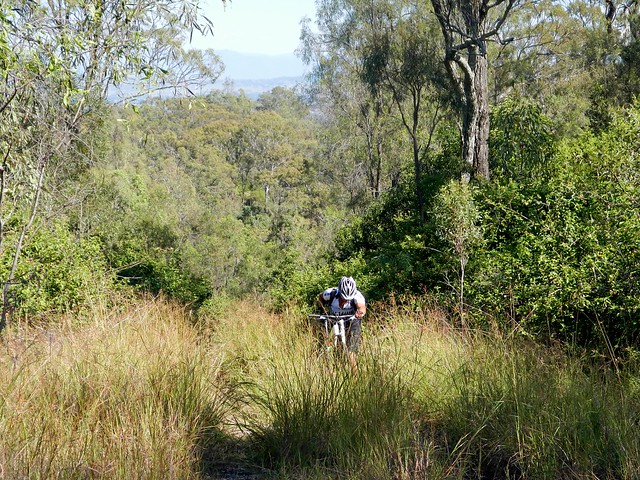 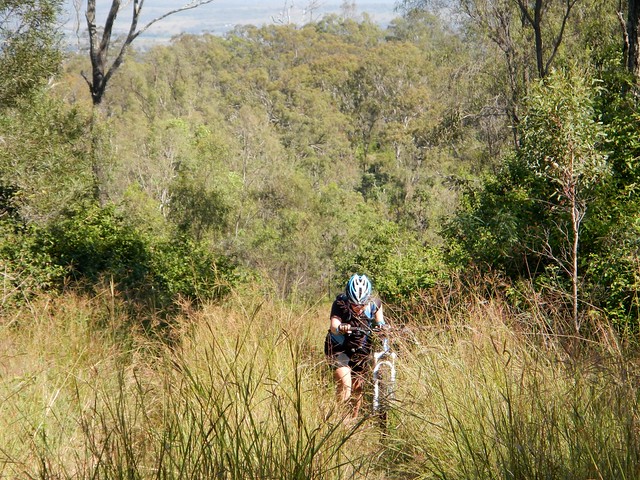 Our next track quickly devolved into a grassy jungle again, but this time we had the added joy of having to bash through it up-hill. Foolhardy soul that I was, I rode the bike up the hill, through the grass, without being able to see the ground. Miraculously I survived, and was able to photograph the others coming up the hill.

How did this mistake save us heart-ache?

Two hours had passed. We had ridden less than ten kilometres. This had been the hardest part of the ride. By accident we had gotten it out of the way during the early part of the day while our legs were still fresh. I shudder to think how we would have managed if we had to contend with this sort of challenge at the end of the day when we would have been much more tired.

Note to self: Do the tough stuff first, and save the easy stuff till last. 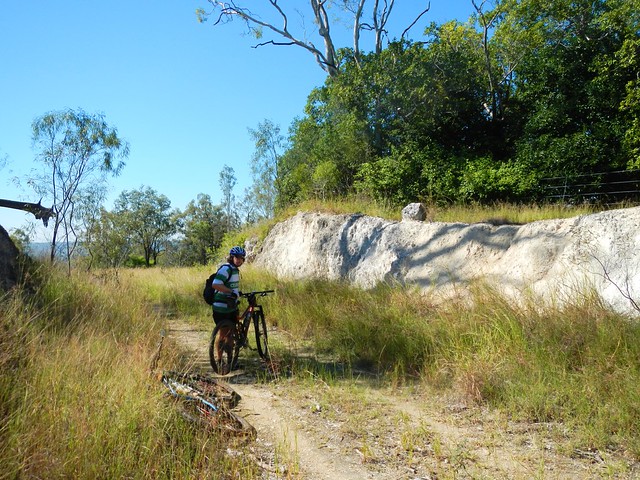 At the top of the hill, the grass thinned out, and we came across a large ridge of white limestone. I had a “eureka” moment as I realized why this locality is called “Limestone Ridges”. The track we were riding actually ran between two limestone quarries. In fact the whole area near Ipswich used to be called “Limestone” in the mid 19th century because of the white rock that could be quarried there. (Come to think of it, isn’t there a place near Ipswich called “White Rock” as well?) 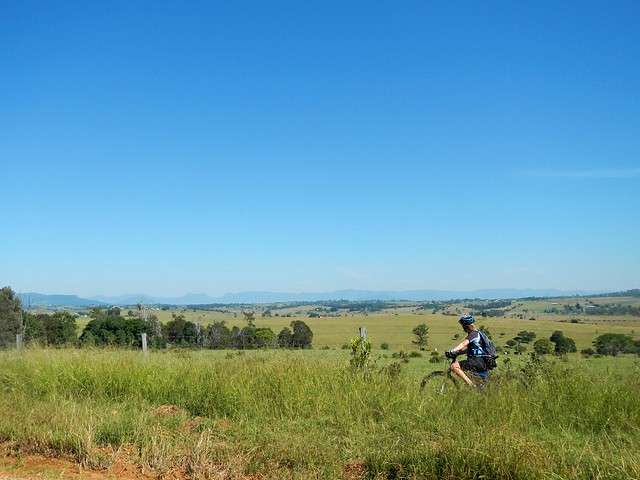 After rolling down the other side of the hill, we slowly made our way eastwards up into the Teviot Range. The long climb up Wenzell Road offered some impressive views westwards towards Cunningham’s Gap. 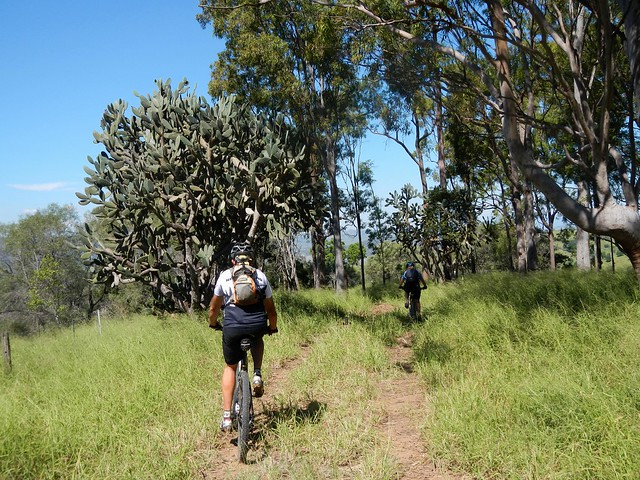 Eventually we reached the top of the hill. After another short bash through some long grass we eventually found the trail that would take us down the hill towards the Western Trailhead at Mount Joyce Recreation Park, near Lillybrook Station.

This was a really enjoyable descent. It was steep and rocky, and required a reasonable amount of technical ability to stay on the bike. It followed some wonderful single-tracks that had been worn by intrepid cattle that grazed on the side of the hill. For me, this track was the highlight of the ride. I’d love to include it as part of some future ride to Mount Joyce. 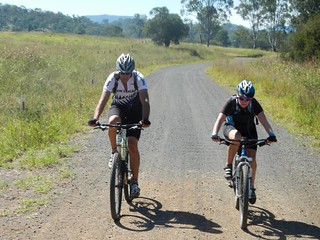 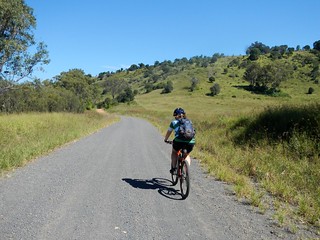 And after what seemed too short a time, we were down the other side, following Old Beaudesert Road along Teviot Brook.

This track has personal significance for me. It was where I rode with my (then) eleven year old son in the middle of the night, in the middle of winter after we’d got lost riding at Mount Joyce. In the light of day it seemed much more benign than it did back then. 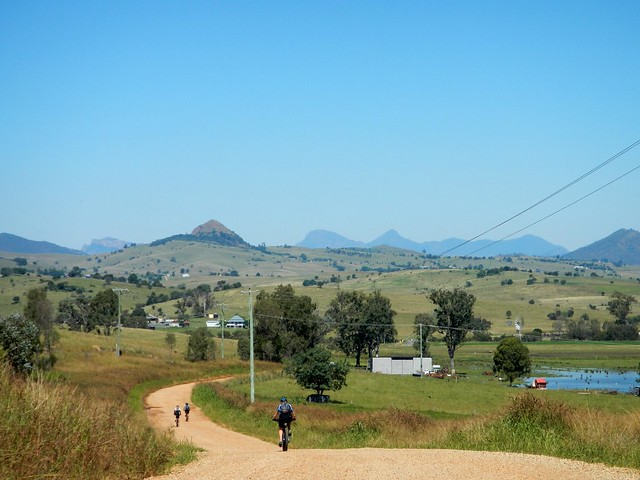 There are some beautiful dirt roads out the back of Boonah… 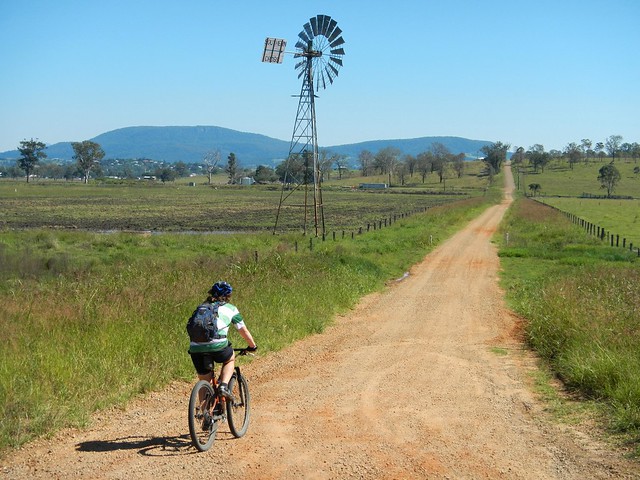 We made our way into town, soaking up the great views around us. 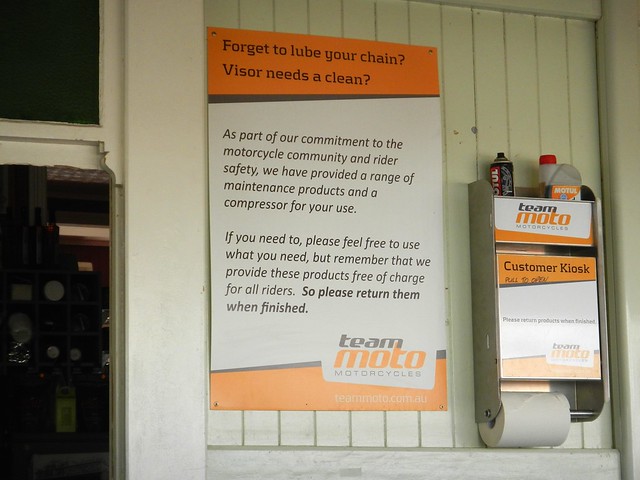 I ate too much good food at “Flavours Cafe” in Boonah. Impressively, they have a supply of chain lube, paper towels, visor cleaner and compressed air – all free of charge. I think it’s because of the large numbers of motorcyclists who frequent the cafe. For future rides, it’s handy to know where you can get some free chain lube! 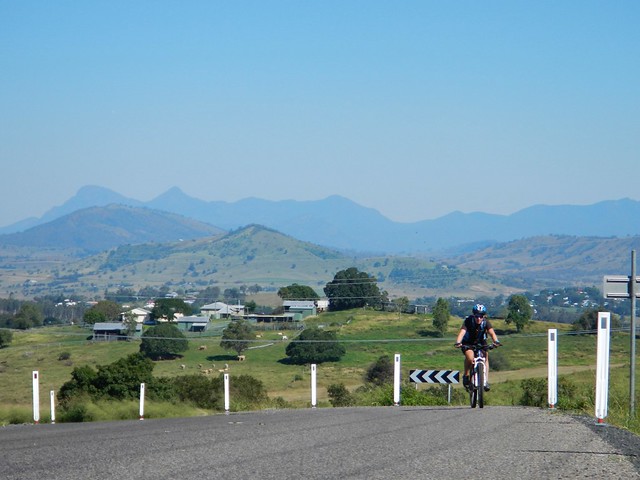 Hoya Road runs north out of Boonah. The Great Dividing Range to the west provides a picturesque backdrop to this steep climb. After my indulgent lunch, I was glad I took this one slowly. 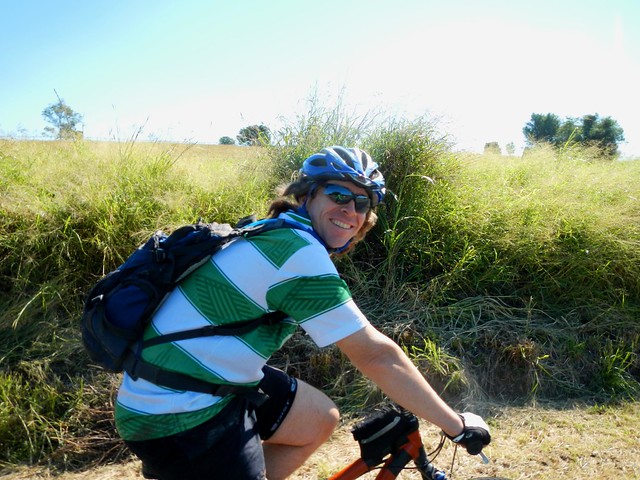 I don’t know what his secret was, but the tough climbs never seemed to faze Dean at all. 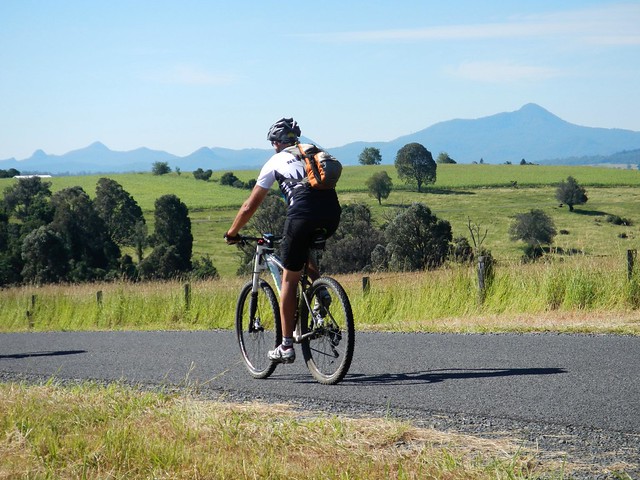 Our route back to our starting point followed the hill tops for about 12 km. Although the road was straight, it was undulating. I lost count of the number of times we’d get to the top of one hill, roll down the other side, only to have to grind up another hill. The mountain views provided a pretty distraction from the hard work. 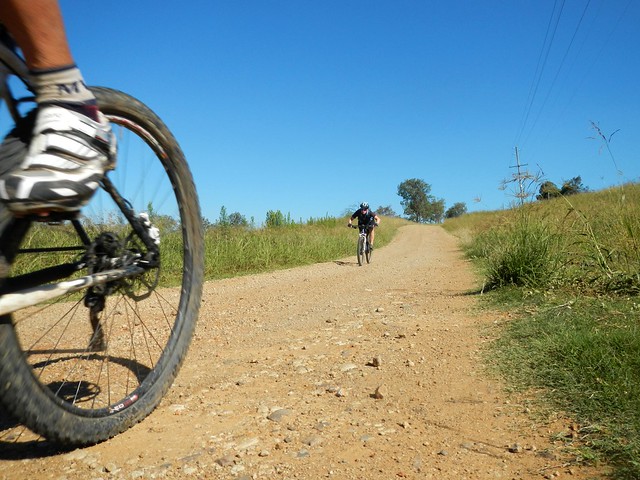 I think we were all happy when the paved roads gave way to dirt, and we were able to let our tyres crunch through the gravel. 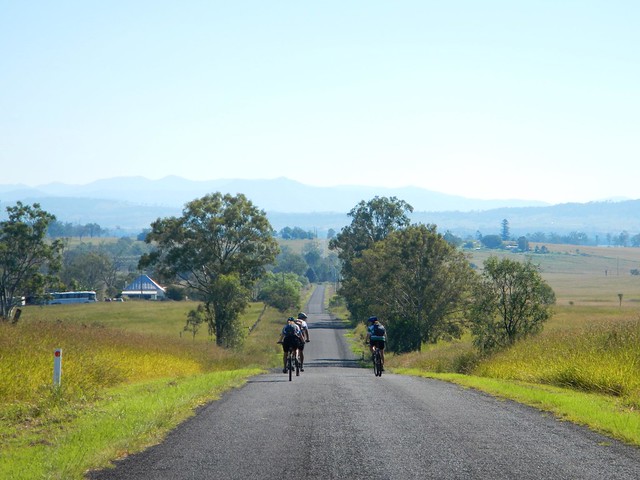 The last ten kilometres of the ride were the easiest. Because of our earlier mistake we were now able to roll back into town, and relax as we soaked up the views. I’m so glad we didn’t spend the last couple of hours trying to battle mud and overgrowth. 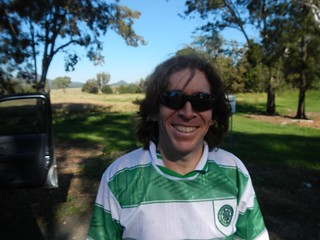 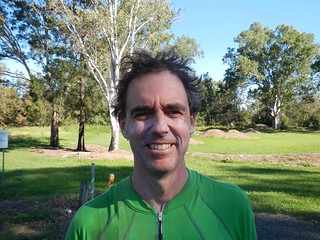 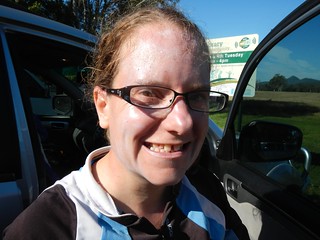 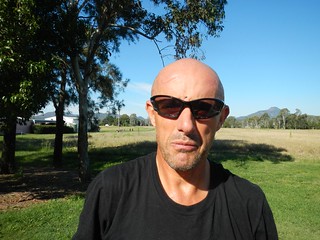 Because of the rugged start, and the numerous climbs, I rate this one 9 out of 10 on the tough-o-metre. If we did this ride again, and left out the mudfest at the start, I’d rate it 8 out of 10.

Thanks Becca, Paul and Dean for a fun ride, and for sticking with me, even when things were looking a bit tough!

The Road to Kooralbyn