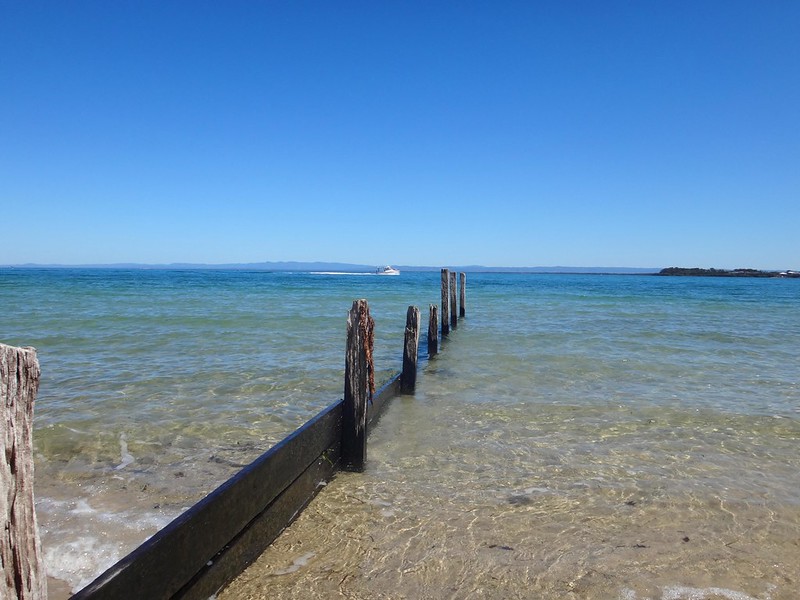 Bribie Island is a sea-side paradise, less than an hours drive from the northern Suburbs of Brisbane.

The aboriginal name for the island is “Yarun”, meaning “Crab”. According to traditional legends, Yarun (or Yirrin) was a greedy man who ate too much honey. The bees smelled the honey, and covered him with wax. He ran out into the water, but the tides and the bees weighed him down. He got stuck in the mud, the wax hardened and before long he had turned into a crab. He and his people have been crabs ever since.

The name “Bribie” comes from the Aboriginal word “Boorabee” which means “Koala”. In the early days of the Moreton Bay convict settlement, several convicts escaped and made their way to Bribie Island. Eventually, the word “Bribie” became synonymous with disappearing from every day life: when a man from Brisbane had left town without leaving an address, people would say he had “Gone to Bribie”.

Harrison and I spent a lazy day exploring the history of this wonderful place. Perhaps we should have let people know we’d “Gone to Bribie” 🙂 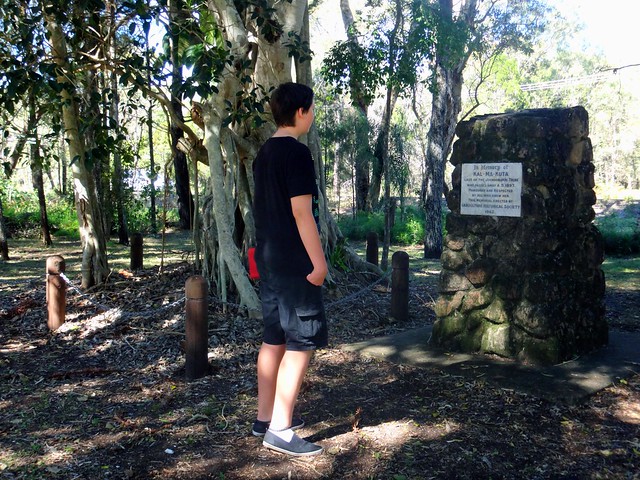 One of the stories of Bribie Island that has intrigued me for ages is the story of Kal-Ma-Kuta, a Joondaburri aboriginal woman. I’ve often driven past an unusual memorial about her, built in the middle of the busy four-lane road as you approach the Bribie bridge on the road from Caboolture, near Turners Camp Road.

The memorial, erected in 1962, said that Kal-Ma-Kuta was the “Last of the Joondaburri Tribe”. 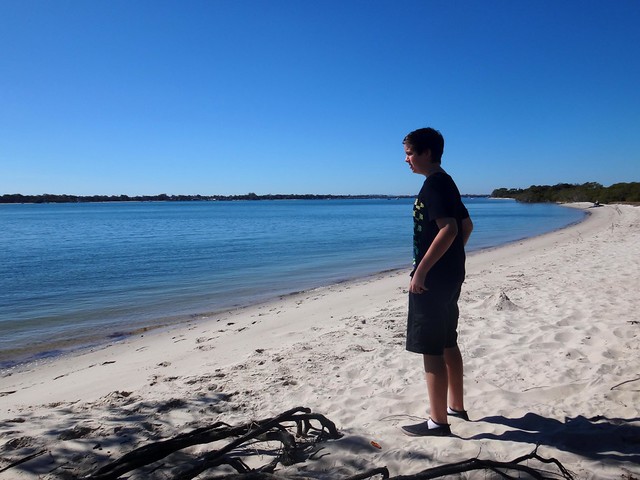 Today we decided to stop and have a look, and try to answer a few questions about her.

We parked the car near the beach on Turners Camp Road, planning to walk back to the memorial and check it out, but discovered a newer memorial near the water… 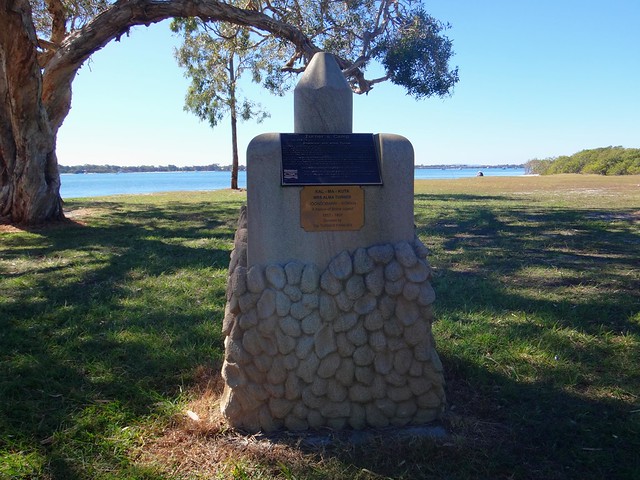 According to the plaque, this place was where Kal-Ma-Kuta (who was also known by the anglicized name “Alma”) and her husband, Fred Turner, built a house shortly after they married in 1872. They had eight children together, and lived together at this spot until Kal-Ma-Kuta’s death in 1897. The place became known as “Turners Camp” because of them.

This raised another question for me: If Kal-Ma-Kuta had eight children, why did the memorial say she was the last woman of her tribe?

I eventually found an old (2004) copy of Indigenous journal, “The Koori Mail”, which recounted a story that in the 1870’s oyster fisherman, Fred Turner, had a boating accident. He was rescued by a young aboriginal woman and eventually married her. Fred and Kal-Ma-Kuta had an oyster lease, and also were responsible for lighting the beacons on Toorbul Point (known today as Sandstone Point). The article also said that the Turner’s great grand-daughter, Daphne Kalmakuta Dux, had successfully lobbied local politicians to erect the newer memorial by the water.

Here’s a short video of her, filmed by students at Lismore TAFE in 2009…


I was able to speak with Aunty Daphne on the phone. I asked her about the “Last of her tribe” comment on the 1962 memorial. She told me, “I’m one one of Kal-Ma-Kuta’s descendants. I’m Joondaburri. So we can’t all have disappeared!” I’m glad she sorted that out. You can see some of her amazing work at Serpentine Arts. 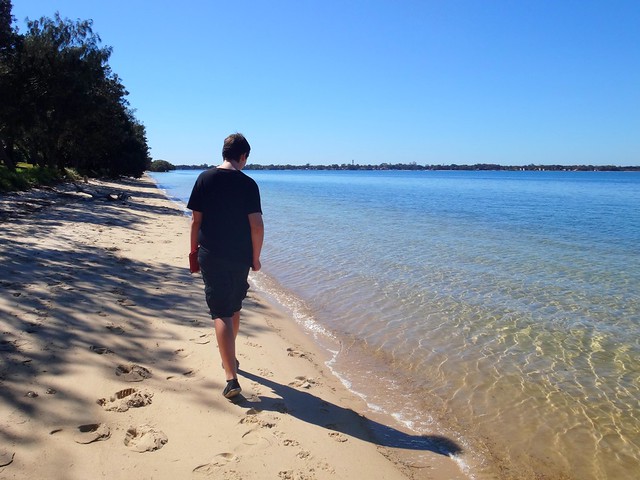 The “Koori Mail” article said the Turners had a contract to maintain navigation beacons in the Pumicestone Passage at Toorbul Point. My friend Jason had told me the day before that if we had a look around Toorbul Point we might find the remains of an old Aboriginal fish trap. So Harrison and I decided to pop down the road and have a look around… 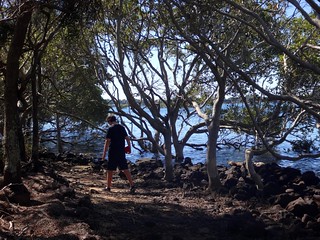 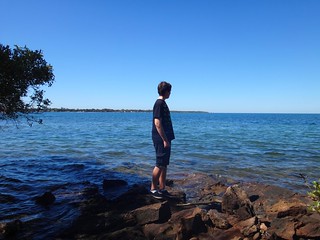 I asked a fisherman at the point if he knew about the Aboriginal fish trap, and he pointed to a spot a few metres away and said “Yes. It’s right there. But you won’t see much at the moment because it’s high tide”.

The whole idea with fish traps was to build a wall of rocks that would be submerged by the rising tide. Fish would swim into the enclosure, and be trapped as the tide fell. The successful fishermen would then help themselves to fresh seafood.

Before Eurpoean settlement, this place was a seafood lovers delight. What we know today as expensive Sydney Rock Oysters could be picked fresh from the rocks. Crabs, fish, dugong, turtles…. there was an abundance of good food for the local inhabitants. 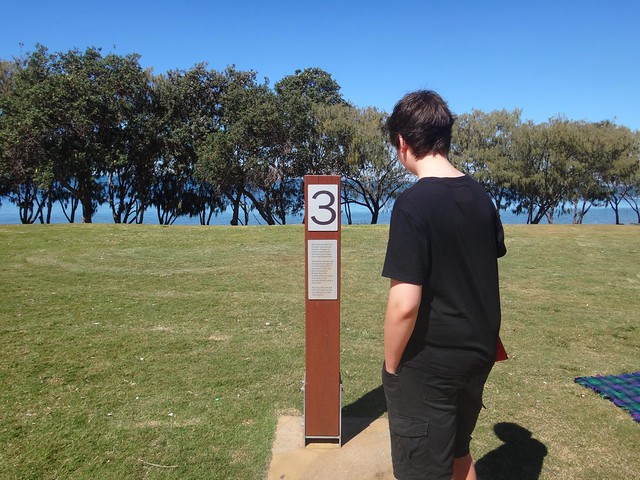 This quartet of simple markers tells the story of three english ticket-of-leave convicts who, in 1823, were shipwrecked on nearby Moreton Island. Suffering a fierce storm off the coast of Newcastle, south of Sydney, they had drifted for several weeks before being washed ashore almost 1,000 km to the north. After being cared for by the Aboriginies on Moreton and Stradbroke Islands, they made a canoe, crossed Moreton Bay and came ashore at near present day Cleveland, south of Brisbane.

Finnegan, Parsons and Pamphlett thought they had been washed ashore south of Sydney, so started walking northwards in the hope of going home. But instead they crossed several rivers and eventually ended up living with the Joondaburri on Bribie Island.

The diet these three ex-convicts enjoyed on the islands of Moreton Bay was probably the most healthy and sumptious they had ever experienced in their short, unfortunate lives. Harrison and I visited the Museum on Bribie Island, and found this photo, by Jon Rhodes, of the same Toorbul Point Fish Trap that we had been looking for earlier in the day. It might be an idea to go back to this point at low tide and see if the fish trap is easier to see. 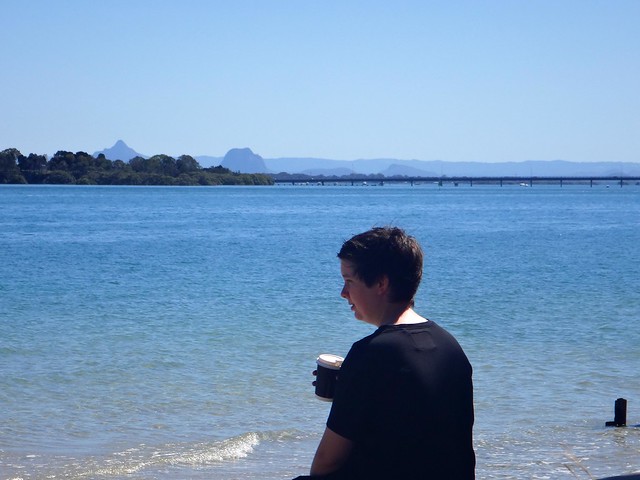 Taking a break from history, we grabbed some morning tea and sat by the water to enjoy the views of the mountains in the distance. 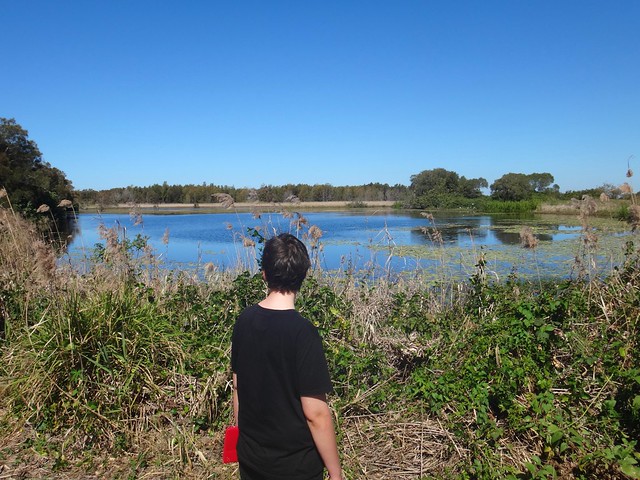 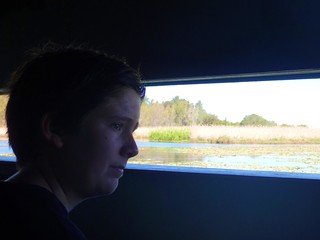 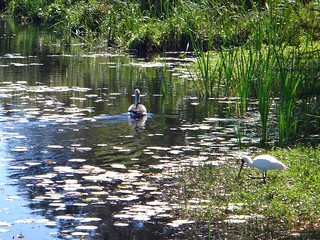 We planned to head to the southern tip of the island to check out a bit more local history. But before doing that, we wanted to have a look at “Buckley’s Hole”. This is an artificial lagoon which was created in the 1980’s when the council built a sand wall across the mouth of a slow-running creek to deter mosquitoes from breeding. The lagoon is an important habitat for a large number of different bird species. To allow visitors to observe the birds, there’s a small “hide” overlooking the lagoon. 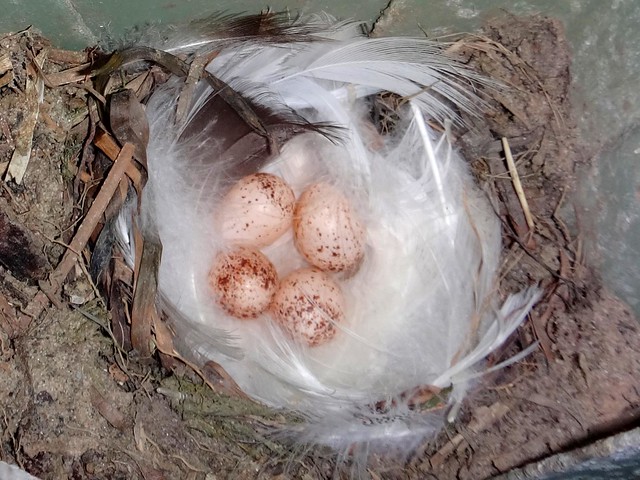 We spent a while quietly watching the wildlife from the hide. A few swallows kept flying in and out of the windows. Keen-eyed Harrison realized there were several nests inside the hide on the wall immediately behind us. We were delighted to find some beautiful speckled eggs inside.

Buckley’s Hole is also important culturally. There are a couple of shell middens nearby, formed over centuries as Aborigines gathered to enjoy shell-fish and then discard the shells. It’s also close to the first documented encounter between Europeans and Aborigines at “Skirmish Point” – as depicted in this painting by Don Brabden that we saw in the Bribie Museum. It shows Matthew Flinders rowing ashore from his sloop, The Norfolk.

Funnily enough, this is also the same point where our three ship wrecked ex-convicts: Finnegan, Parsons and Pamphlet, were found almost 24 years later by an astonished John Oxley in 1823. 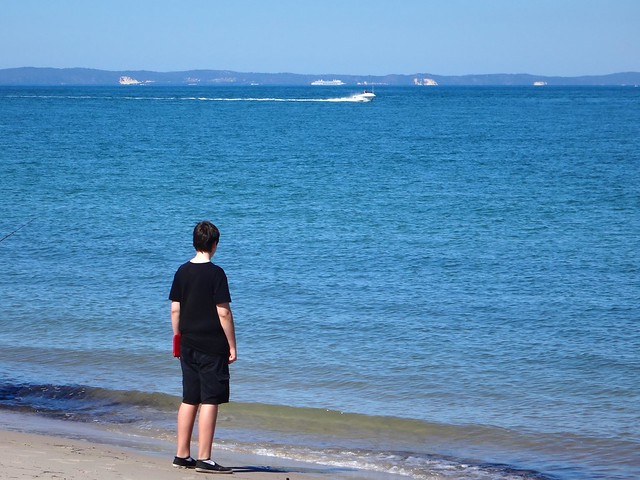 Harrison and I made our way down to Skirmish Point. There were no old wooden sloops there today – just a flotilla of modern pleasure craft, and a small cruise ship in the distance. 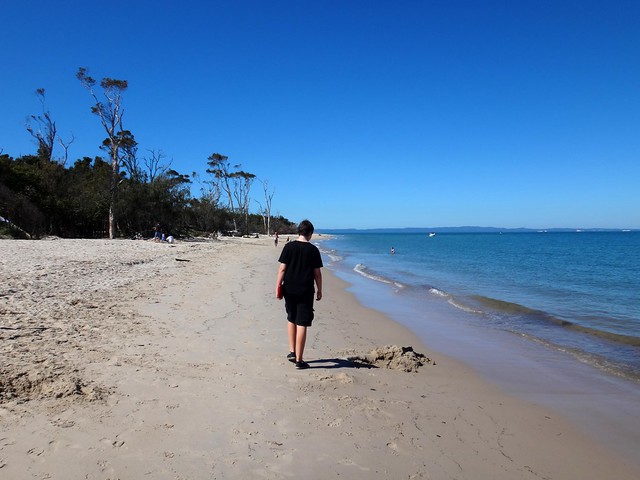 What a beautiful part of the world! 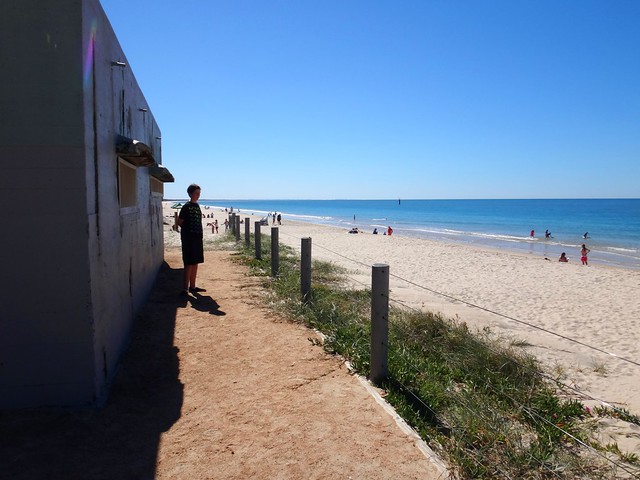 Eventually we made our way across to the eastern side of the island, or “surf side” as the locals call it.

It didn’t take us long to find our final historical landmark – the old World War II bunkers in the sand dunes behind the beach. These bunkers had a couple of 155mm guns mounted on them and were capable of hitting a target 30km away. The shipping channel at this point comes in closely to the coastline, so it was an ideal point for the fortifications. The bunkers were also used to monitor the channel for submarines, and were capable of detonating submerged mines if intruders were detected. 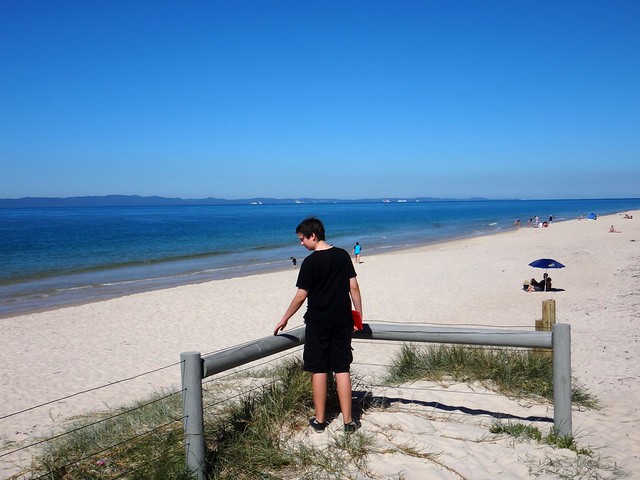 From this spot on Bribie, Moreton Island looks quite close. 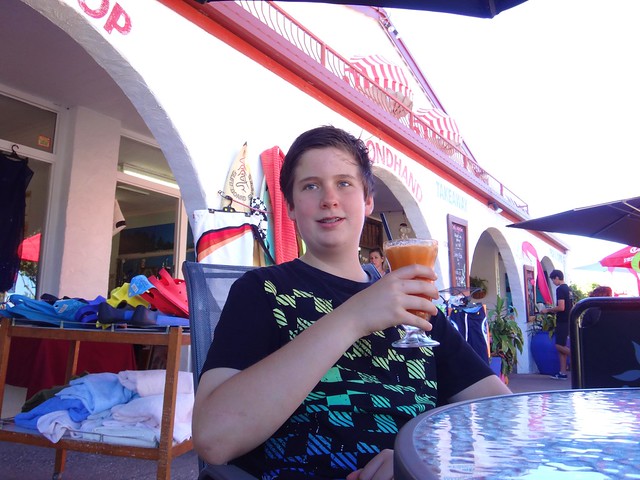 History lesson over, we decided to stop at a cafe in Woorim for a late lunch before heading home.

Today’s trip was only 116km in the car, with about 3 hours exploring on foot, and 2.5 hours driving.

Thanks Harrison for a fun day of exploration!

Historical notes:
1. People more qualified than I suggest that the Joondaburri tribe are part of the Gubbi Gubbi (or Kabi) Aboriginal people.
2. In referring to Kal-Ma-Kuta as the “Last of the Joondaburri Tribe”, the authors of the 1962 monument were probably alluding to the sad fact that most of the tribe had desserted Bribie Island by about 1880. Habitat destruction by European settlers had rendered the island unable to provide enough food for the indigenous population.
3. Aboriginal freedom fighter, Dundalli, was adopted by the Joondaburri tribe, and was involved in some gruesome conflicts with European settlers which eventually resulted in his execution in 1852.