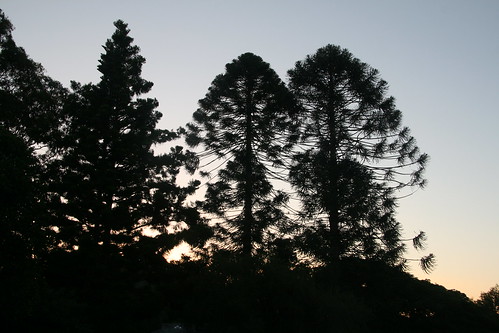 One fascinating story of our local area is of a fourteen year old boy named Tom Petrie who went away with the local Turrbal people for a couple of weeks to walk up to the Blackall Ranges (not far from present day Maleny, Queensland) in 1846 to celebrate the Bunya Feast.

Although a large feast happened every three years in the Bunya Mountains (midway between Dalby and Kingaroy), a smaller annual feast was held in the Blackall Ranges at what is now Baroon Pocket.

For thousands of years the feasts were an important event for Aborigines from all over what is now south east Queensland. They gathered in their hundreds to feast, dance, sing, and generally have a good time. I often wondered what it would have been like to travel back 166 years and see what young Tom saw, hear what he heard and taste some of the food he tasted.

However, thanks to the generosity of the Kabi Kabi people of Queensland’s Sunshine Coast, we were able to find out! Sometimes I’m a bit slow on the uptake and it wasn’t until we turned up that I realized that the “Bunya Dreaming” festival at Baroon Pocket was actually the same event that Tom Petrie took part in – the annual Blackall Range Bunya Feast. The Bunya Tree produces huge cones. They can weigh anywhere from 5 to 10kg. Naturally it’s not a very wise idea to stand under a Bunya tree in summer when it’s full of cones! To harvest the nuts from a Bunya Cone, you need to first break open the cone, pull it apart, and then tease the nuts out of the green sappy flesh. One cone can have many dozen nuts in it. They’re delicious either boiled or roasted over a hot fire. The Emu on the left was just one of the many sculptures around the picnic grounds. Lyndon is talking about the history of the Gubbi Gubbi (or Kabi Kabi) people At the start of the Corroboree, one member took a spear, and spun it between the palms of his hands while pushing the end of it into a piece of wood on the ground. After a few seconds smoke appeared, and not long after that the tinder burst into flames. He made it look so easy!

Notice the painting on his chest – a Bunya Pine motif with the cones in the highest branches. Liz and I enjoyed being in the moment. It was great to be around so many happy, relaxed, friendly, and generous people.

The Corroboree by “Gubbi Gubbi Dance” was spectacular. The best part was that we all got to join in at the end! Look for the strange looking guy in the white shirt with the bandy legs. Thats me 🙂

The bon-yi tree bears huge cones, full of nuts, which the natives are very fond of. Each year the trees will bear a few cones, but it was only in every third year that the great gatherings of the natives took place, for then it was that the trees bore a heavy crop, and the blacks never failed to know the season.

These gatherings were really like huge picnics, the aborigines belonging to the district sending messengers out to invite members from other tribes to come and have a feast. Perhaps fifteen would be asked here, and thirty there, and they were mostly young people, who were able and fit to travel. Then these tribes would ia turn ask others. For instance, the Bribie blacks (Ngunda tribe) on receiving their invitation would perchance invite the Turrbal people to join them, and the latter would then ask the Logan, or Yaggapal tribe.and other island blacks, and so on from tribe to tribe all over the country, for the different tribes were generally connected by marriage, and the relatives thus invited each other. Those near at hand would all turn up, old and young, but the tribes from afar would leave the aged and the sick behind.

My father was present at one of these feasts when a boy for over a fortnight. He is the only free white man who has ever been present at a bon-yi feast. Two or three convicts in the old days, who escaped and lived afterwards with the blacks—James Davis (” Duramboi “), Bracefield (” Wandi “), and Fahey (“Gilbury”), of course, knew all about it, but they are dead now. Father met the two former after their return to civihzation, and he has often had a yarn with the old blacks who belonged to the tribes they had lived with.

In those early days the Blackall Range was spoken of as the Bon-yi Mountains, and it was there that Duramboi and Bracefield joined in the feasts, and there also that Father saw it all. He was only fourteen or fifteen years old at the time, and travelled from Brisbane with a party of about one hundred, counting the women and children. They camped the first night at Bu-yu—ba (shin of leg), the native name for the creek crossing at what is now known as Enoggera.
…
Arriving at the Blackall Range, the party made a halt at the first bon-yi tree they came to, and a blackfellow accompanying them, who belonged to the district, climbed up the tree by means of a vine. When a native wishes to climb a tree that has no lower branches he cuts notches or steps in the trunk as he goes up, ascending with the help of a vine held round the stem. But my father’s experience has been that the blacks would never by any chance cut a bon-yi, affirming that to do so would injure the tree, and they climbed with the vine alone, the rough surface of the tree helping them.

This tree they came first upon was a good specimen, 100 feet high before a branch, and when the native climbing could reach a cone he pulled one and opened it with a tomahawk to see if it was all right. (The others said if he did not do this the nuts would be empty and worthless, and Father noticed afterwards that the first cone was always examined before being thrown to the ground.) Then the man called out that all was well, and, throwing down the cone, he broke a branch, and with it poked and knocked off other cones. As they fell to the ground, the blacks assembled below would break them up, and, taking out the nuts, put them in their dilly-bags. Afterwards they went further on, and, camping, made fires to roast the nuts, of which they had a great feed — roasted they were very nice.
…
Great times those were, and what lots of fun these children of the woods had in catching paddymelons in the scrub with their nets, also in obtaining other food, of which there was plenty, such as opossums, snakes, and other animals, turkey eggs, wild yams, native figs, and a large white grub, which was found in dead trees. These latter are as thick as one’s finger and about three inches long. They were very plentiful in the scrubs, and the natives knew at a glance where to look for them. They would eat these raw with great relish, as we do an oyster, or they would roast them. Then the young tops of the cabbage tree palm, and other palms which,
grew there, served as a sort of a vegetable, and were not bad, according to my father. The bon-yi nuts were generally roasted, the blacks preferring them so, but they were also eaten raw.

It will be seen that there was no lack of food of different kinds during a bon-yi feast ; the natives did not only live on nuts as some suppose. To them it was a real pleasure getting their food ; they were so light-hearted and gay, nothing troubled them ; they had no bills to meet or wages to pay. And there were no missionaries in those days to make them think how bad they were. Whatever their faults Father could not have been treated better,and when they came into camp of an afternoon about four o’clock, from all.directions, laden with good things—opossums, carpet snakes, wild turkey eggs, and yams — he would get his share of the best — as much as he could eat. The turkey eggs were about the size of a goose egg, and the fresh ones were taken to the white boy, while addled eggs, or those (let me whisper it) with Chickens in them, were eaten and relished by the blacks, after being roasted in the hot ashes.

My father always noticed how open-handed and generous the aborigines were. Some of us would do well to learn from them in that respect. If there were unfortunates who had been unlucky in the hunt for food, it made no difference; they did not go without, but shared equally with, the others.