Imagine spending almost two weeks riding your bike. The first half through rugged bushland, the second half on sandy beaches. Here’s our account of this wonderful experience. 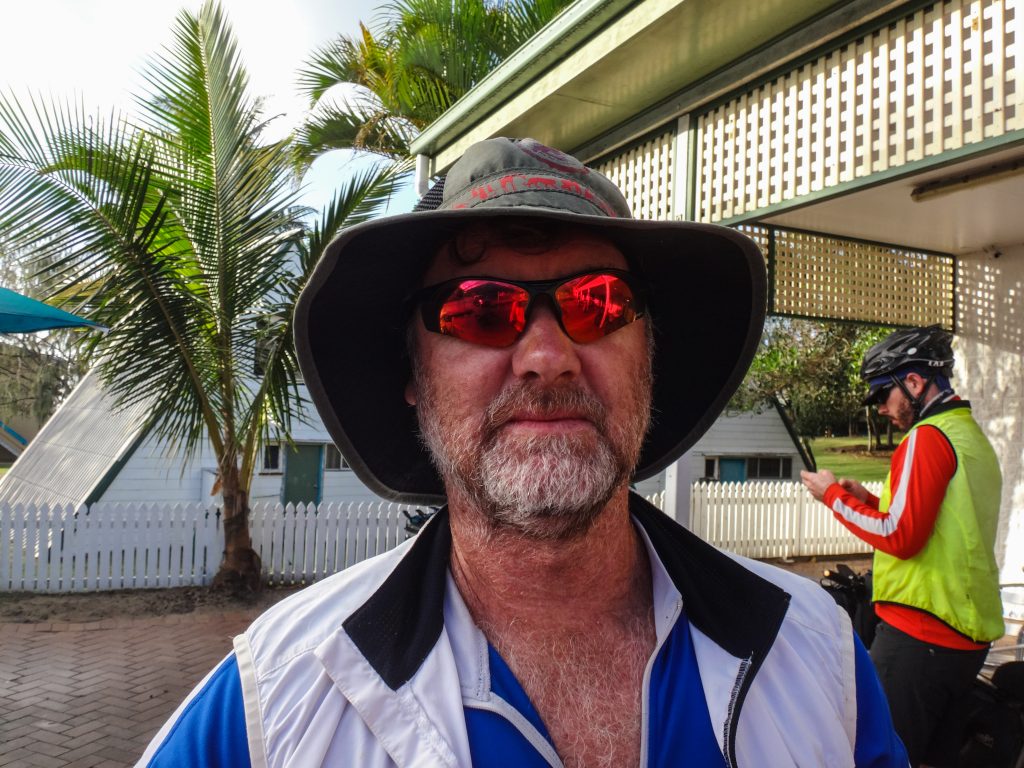 Wayne’s original plan was to take three or four days off and ride his bike from Brisbane to Maryborough, then catch the train back. He talked with a few of us about it. We convinced him to forget about catching the train – why not ride up there and back again?

Our aim was to ride northwards through bushland, then ride south along the beach. It would take at least ten days.

To save weight we’d stay at pubs, motels and caravan parks along the way. This meant we wouldn’t have to carry camping gear on the bikes.

To avoid traffic we’d start at Beerburrum, a small town with a railway station with lots of tracks leading off into the forests of the Glasshouse Mountains, do a big loop up to Maryborough, then finish at Ningi, near Bribie Island, over seven hundred kilometres later. 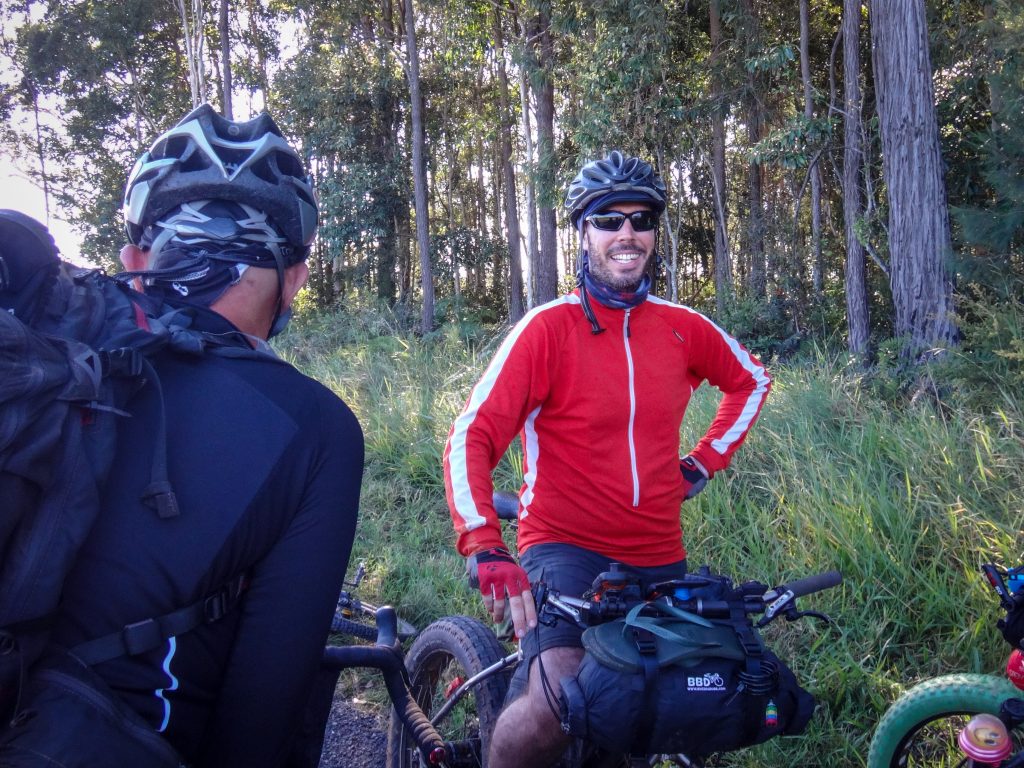 Justin heard of our plans, and decided to go one better.

He’d start his ride at Ipswich, two days earlier than the rest of us. He’d ride up the Brisbane Valley Rail Trail, then head east via Woodford to meet us at Beerwah on the third day.

At the end of my street is a train station. I could have easily taken the two-hour train trip to Beerburrum to the start of the ride. But, a more appealing option came to mind: The Brisbane Valley Rail Trail (BVRT). This would extend my trip by another two days, with stop-overs at Toogoolawah and Beerwah. I would meet the rest of the group at the start of their ride.

Being a weekday, I was picturing a quiet trail. I was wrong. The trail was well used by morning cyclists and runners, a couple of horse riders and two other touring cyclists who were completing parts of the trail.

Justin: Josh ‘The Bear’ was also on the trail. He is known as the Google Trekker, and is currently photographing local hiking trails, cycling paths and National Parks. He was keen to have a ride on my fat bike whilst I had a chat with Tanya from “Friends of the BVRT”.

Justin: A local cycling mate joined the journey for about half of the day. It was great to have Ral’s company. We stopped just short of Mount Hallen to have a chat with some tourists who were riding horses back from Yarraman to Coominya.

Justin: I continued on to Toogoolawah, admiring some of the old railway memorabilia, steam boilers and stations.

Justin: The Exchange Pub at Toogoolawah was home for the night. The meals and accommodation here are excellent and I even had a decent outlook from the balcony.

Justin: Today was long. There was a lot of climbing to make it to Beerwah. I used Gregors Creek Road to get to Kilcoy, this was a very scenic route to take, although it was on sealed road. I had been warned of the hilly terrain in the nearby Deer Reserve National Park and decided to avoid that.

Justin: I stopped to enjoy the view from the Kilcoy Racetrack commentators stand…

…and some timber artwork along Villeneuve Road.

Justin: After Woodford I reached the end the of the sealed road.

Justin: I enjoyed riding these hilly, muddy and never-ending trails. 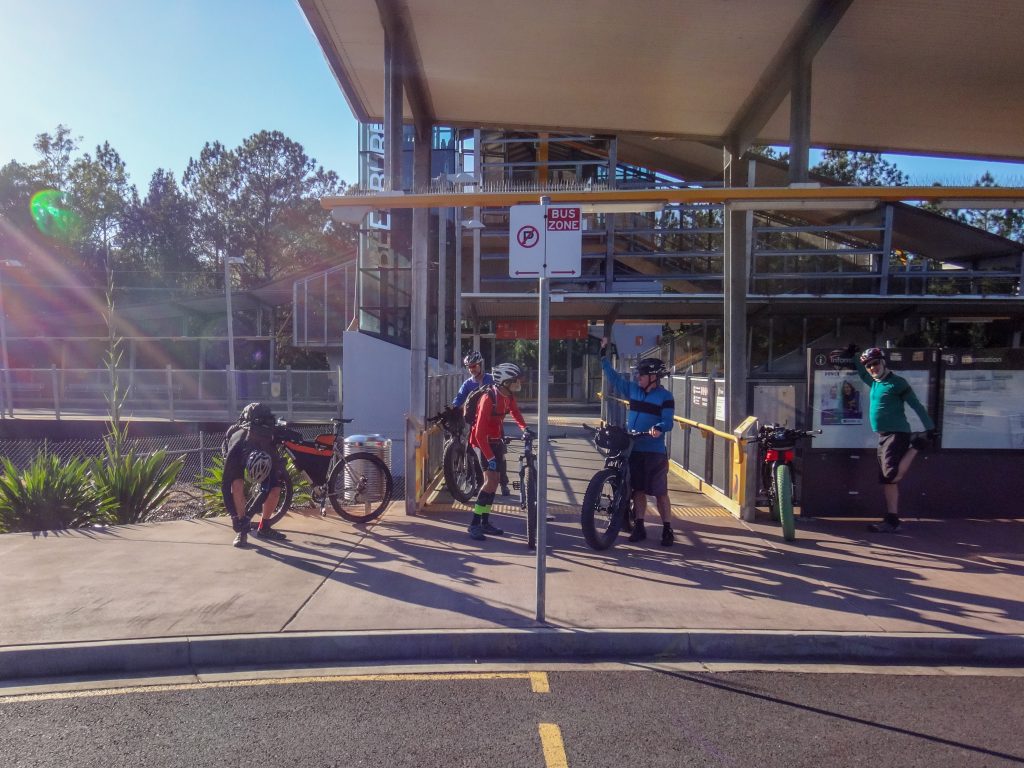 We met at Beerburrum Station.

Darb and Wayne parked their cars at Ningi, about twenty kilometres away.  They’d come in handy sometime next week at the end of our ride when we wanted to go home 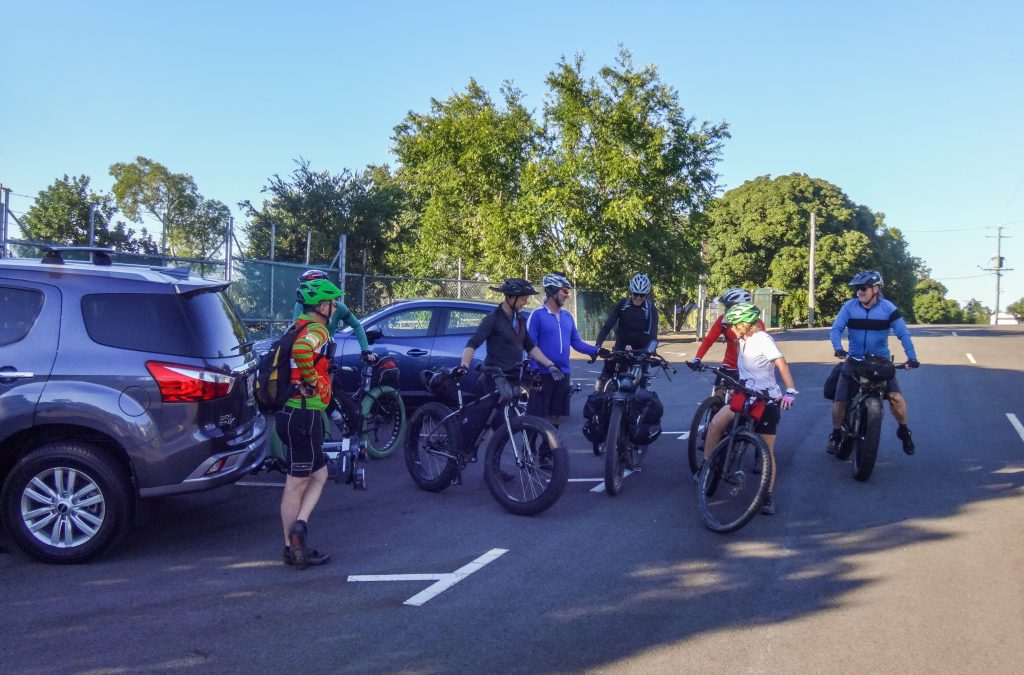 Some bikes were loaded up for a long multi-day ride. 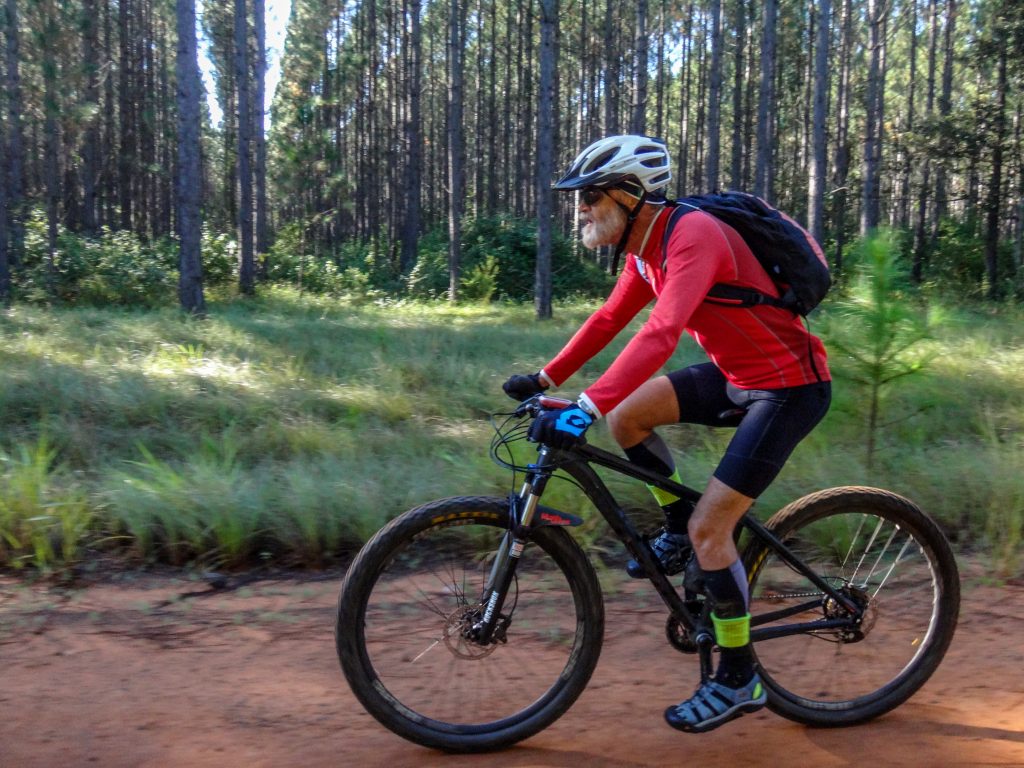 Others, like Calum, rode light.  They were just riding with us for part of the day, and would leave us in the afternoon. 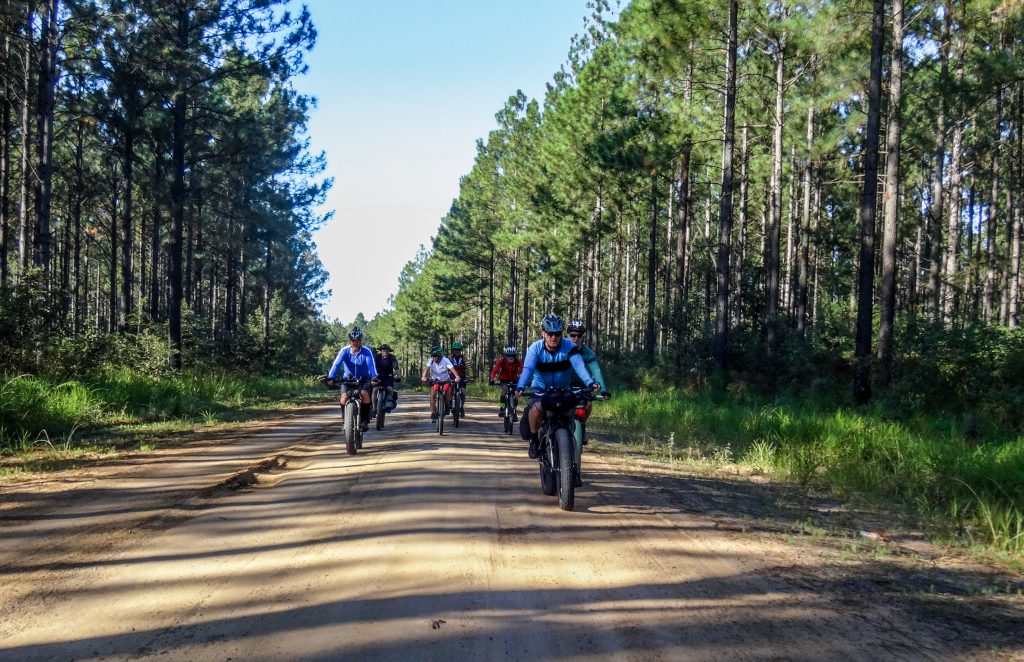 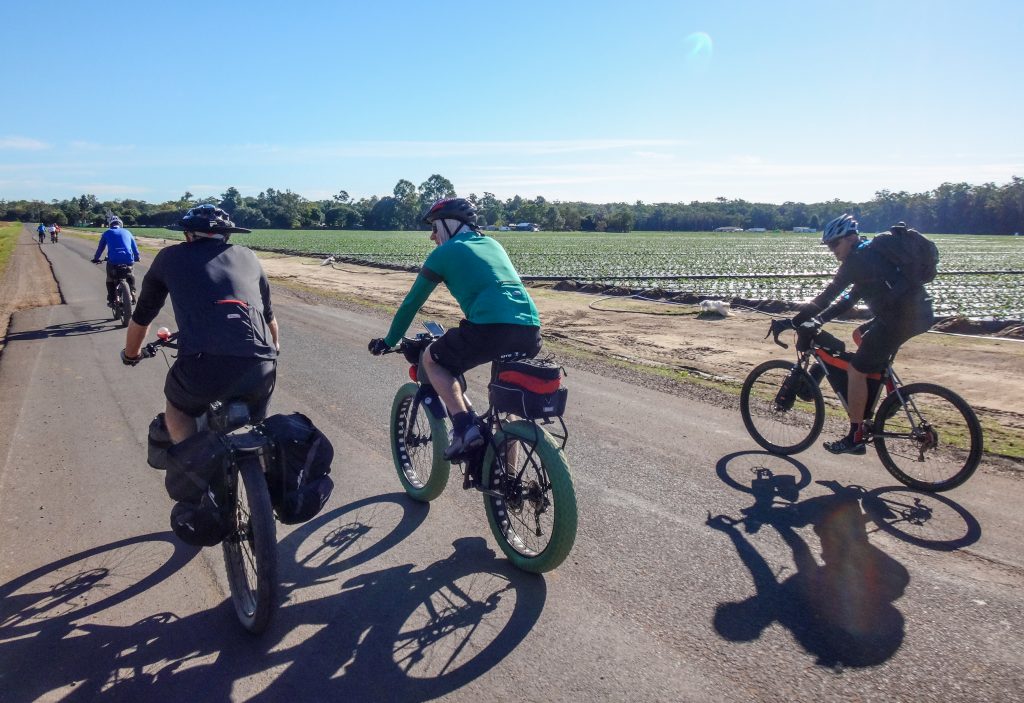 …emerging on the edge of some huge strawberry farms near Beerwah. 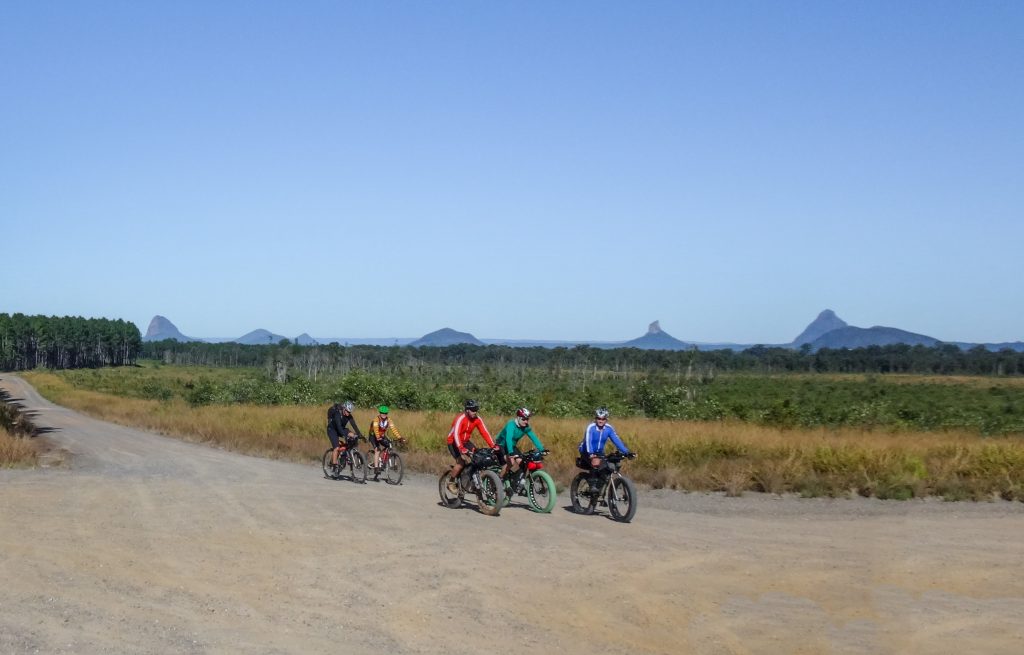 On Hapgood Road we saw all of the Glasshouse Mountains in one sweep, unobscured by plantations.

The terrain changed as we moved from State Forest into National Park. 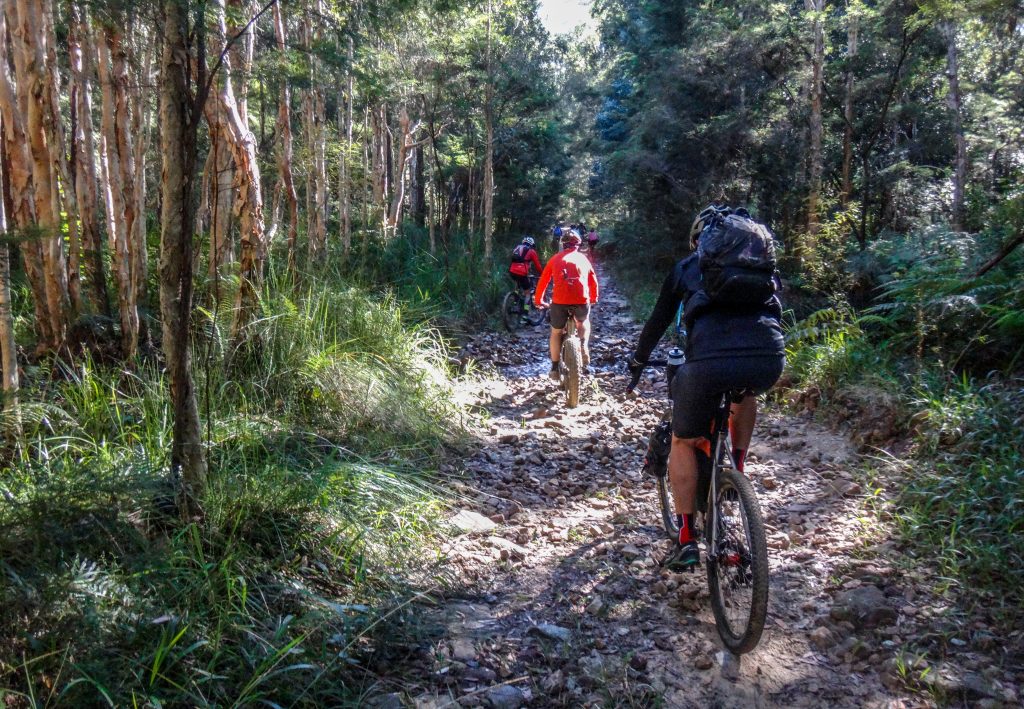 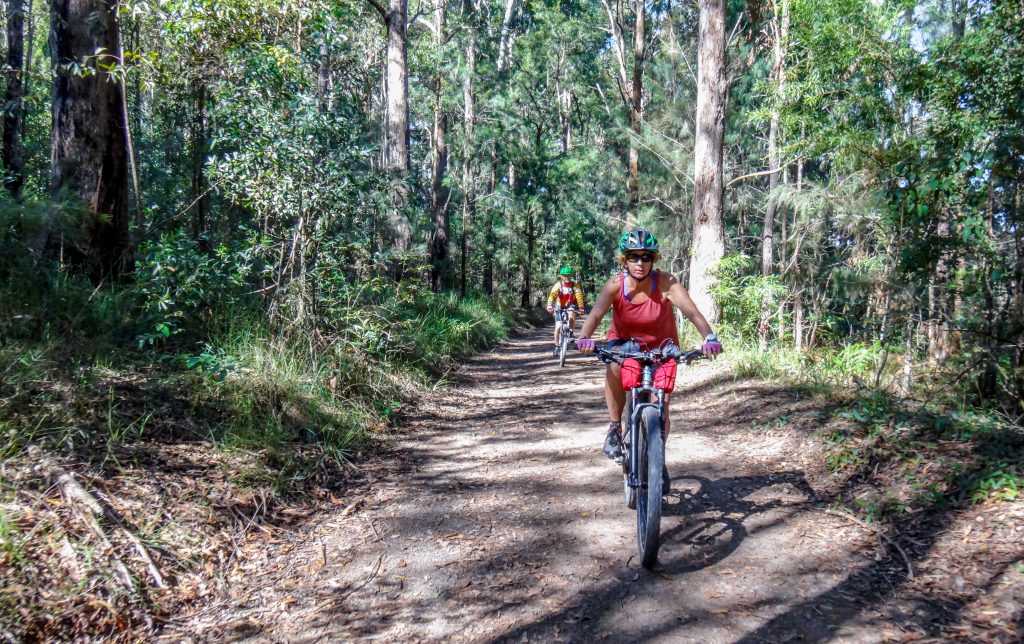 The pines disappeared, replaced with she-oaks, paperbarks and tall eucalypts.

At this point our group split in two… 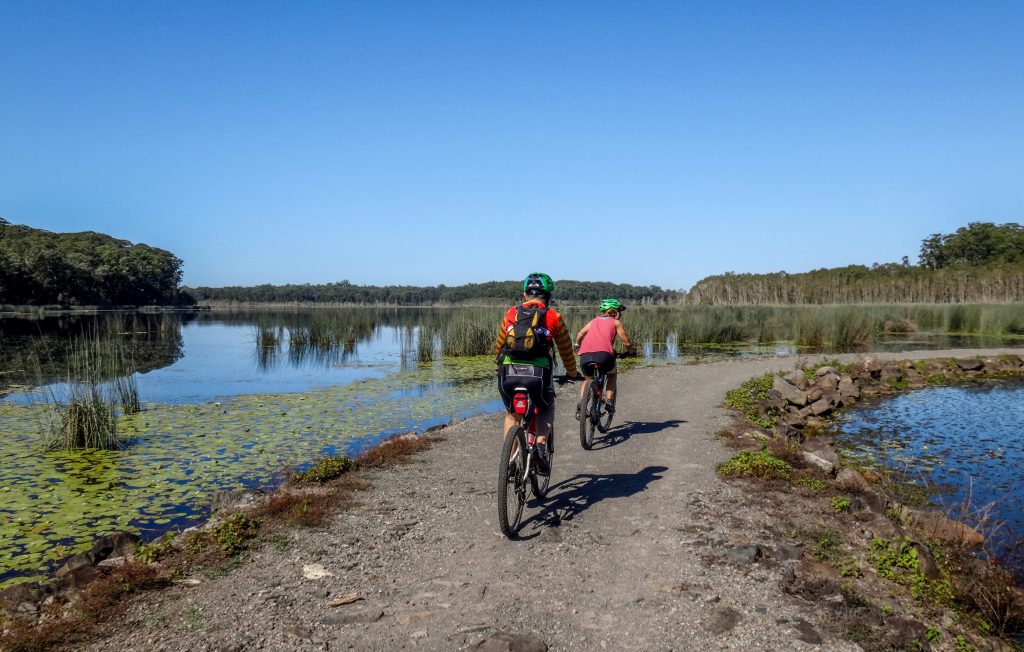 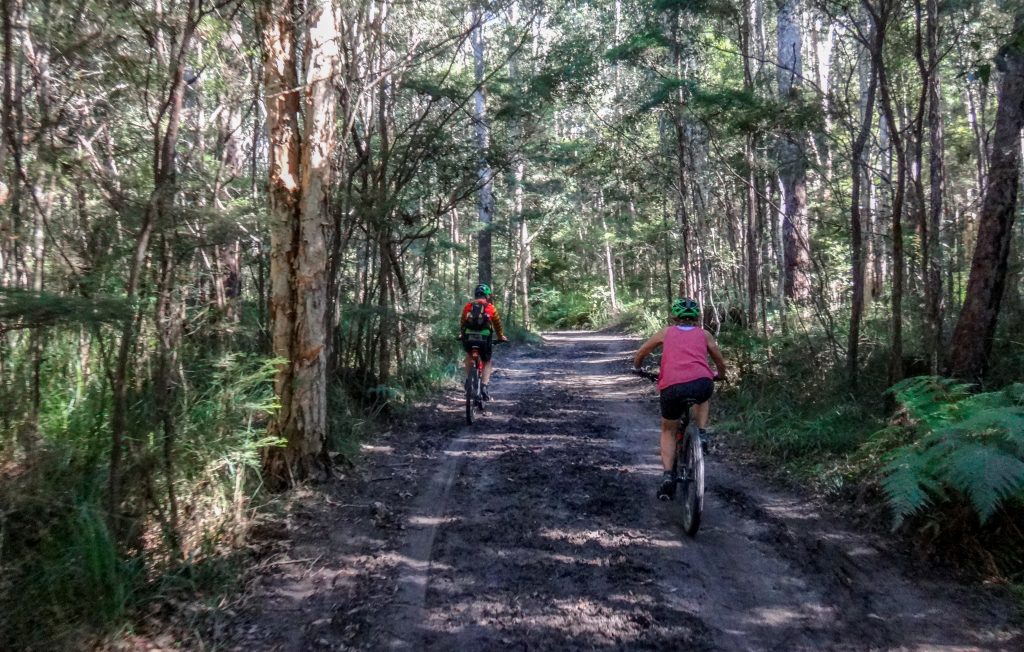 …the multi-day riders continued north, while the day-trippers started heading back to Beerburrum via Ewen Maddock Dam. 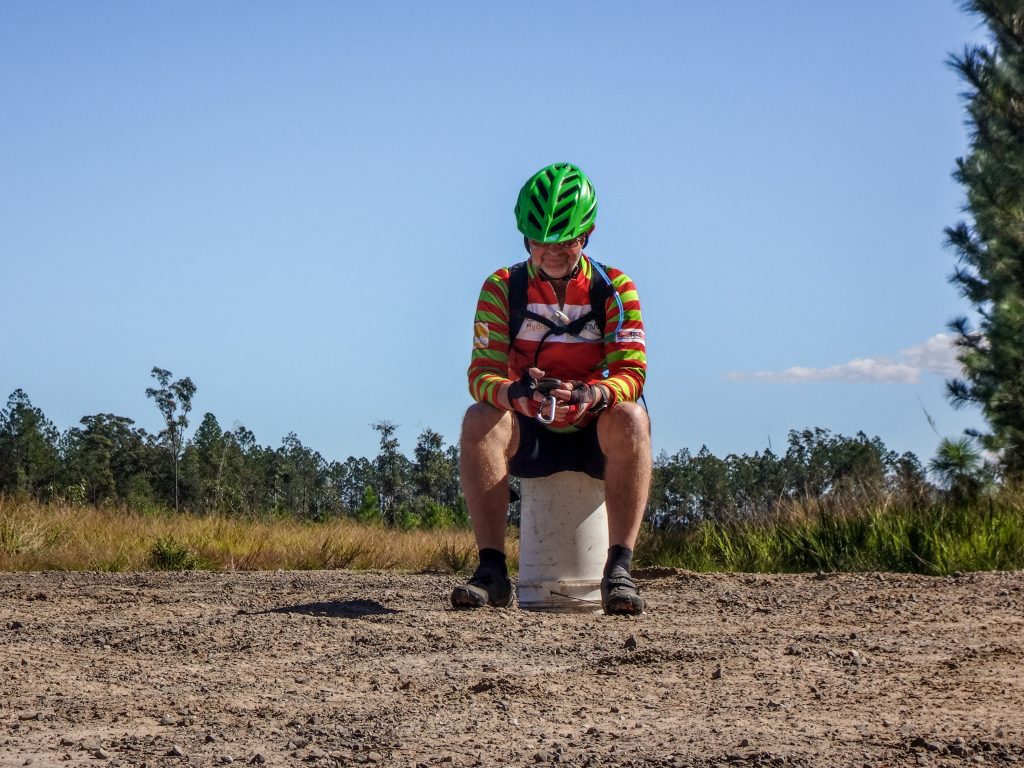 With less people in the homeward-bound group, the pace was much more relaxed.  Russel took a break to set up a makeshift office and answer some text messages. 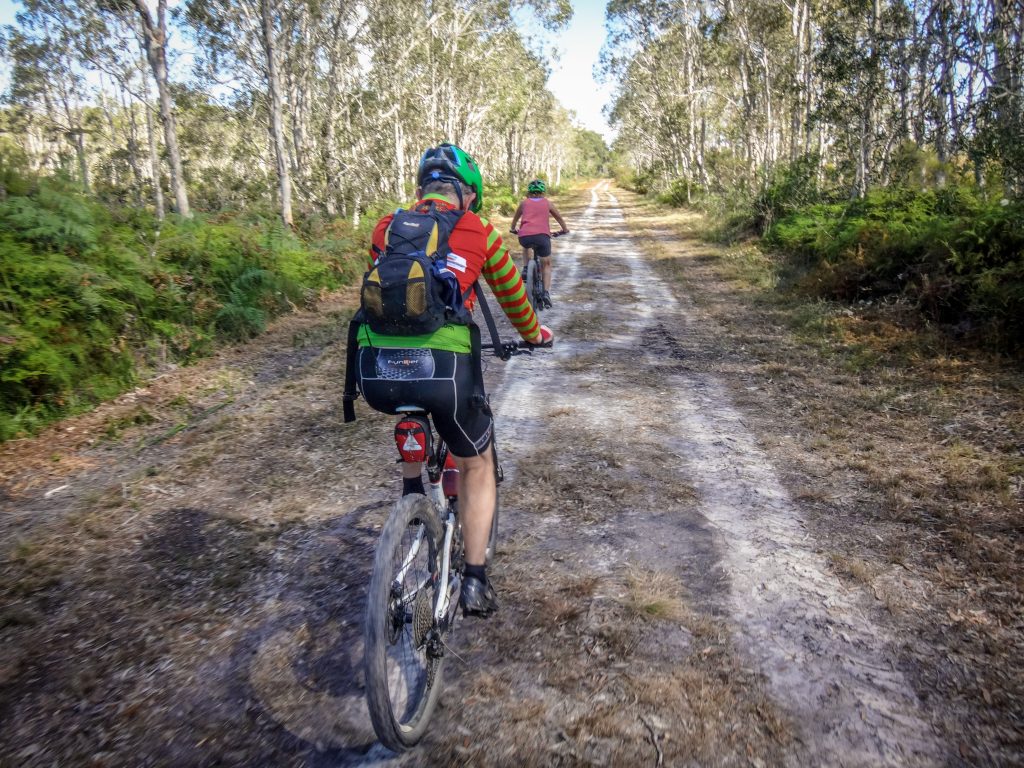 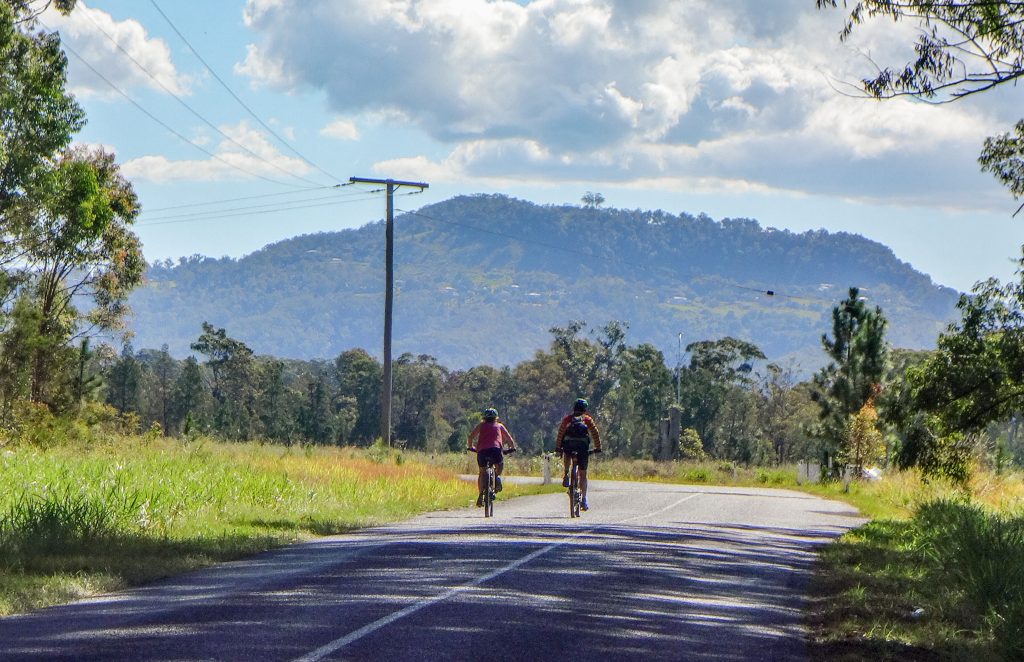 We relaxed as we eased along flat terrain and straight tracks back to the the starting point. 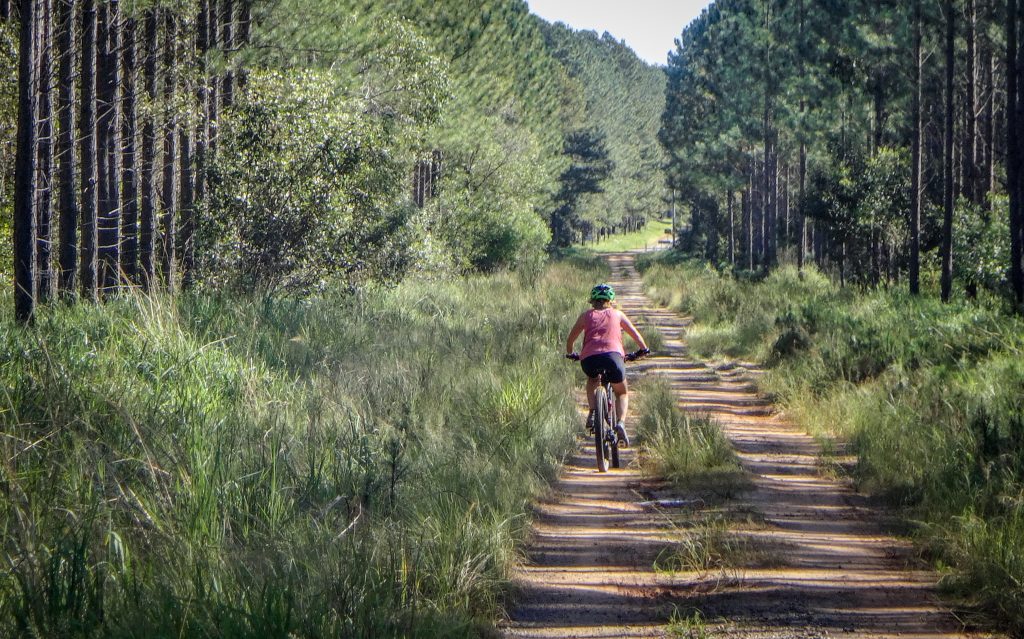 We rode about 68 kilometres in just under six hours including breaks.

This loop rates six out of ten on the tough-o-meter.

This vast floodplain stretches east from the Bruce Highway to Kawana on the coast.

Although it has some lush patches of forest, it floods easily, leaving long muddy puddles in some of the tracks.

The large the fat-bikes tyres made it easier to splash through these sections.

When I had originally spoken with Darb and Wayne about this section of the ride, I had suggested they follow Finland Road north towards Coolum.  When I had ridden it several years earlier, it was a pleasant dirt track running through quiet bushy paddocks.

Unfortunately, the road has recently been blocked off for a new expansion of the Sunshine Coast Airport.

This required a large detour.

Darb said “We had to do a bit of bush bashing and wading through water to get back on track.”

The lop-sided slope of Mount Ninderry is visible from many vantage points around Coolum.

It stood starkly on the horizon behind the flat paddocks and cane fields around Yandina Creek.

The riders avoided the busy oceanfront village at Coolum Beach, instead following a sandy track beside Stumers Creek.

Even though this part of the Sunshine Coast is being rapidly developed, it’s impressive how easy it is to follow tracks through bushland, maintaining a feeling of remoteness and peace.

The multi-day riders covered about 93 kilometres in just over eight hours including breaks.

Darb and Wayne had to ride an extra 24 kilometres at the start of the day, making a total of about 117 kilometres for them.

Due to its length, this long section rates 8.5 out of 10 on the tough-o-meter.

The ride out of Tewantin started around 7am.

The sun was still low in the sky, casting gentle light on the trees.

Darb said “It was a cool start to the day.  We followed some nice single tracks through Tewantin National Park, although (like yesterday) there was a lot of water around”

The water was even deeper in  Ringtail State Forest.  The track looked more like a creek than a fire road.

We’d been riding for more than two hours, and stopped for some morning tea at Boreen Point.

There was no wind.  Lake Cootharaba was mirror smooth in the still morning.

A few kilometres after Boreen Point we crossed Kin Kin Creek and entered Yalanga Station – a large cattle property in the Noosa Hinterland.

Although it was officially a gazetted road, in reality Galloways Lane was little more than a couple of tyre tracks passing through the wide paddocks of this large farm.

Galloways Lane had devolved into a faint disturbance in the undergrowth beside a fence line.

It was covered in water in one or two places.

Although we tried to avoid it we ended up getting our feet wet in the knee deep water.

When we reached the Cooloola Way, we stopped for another quick break. Crashing through thick grass and muddy water is hard work 🙂

Darb: It was an easy ride along the Cooloola Way – the road was open and in good condition.  Although we had planned to visit it beforehand, we decided not to go to Neebs waterhole because to the amount of flood water that was laying around.

We emerged from the bush near Cooloola Cove and followed the paved road for a few kilometres till we reached Tin Can Bay.

Darb: We were pretty tired when we reached Tin Can Bay.

We had a house to share between all of us.

It was a scramble for the shower, and washing our bikes and clothes.

Justin used the clothes line as a handy makeshift bike stand so he could do a few minor repairs to his bike.