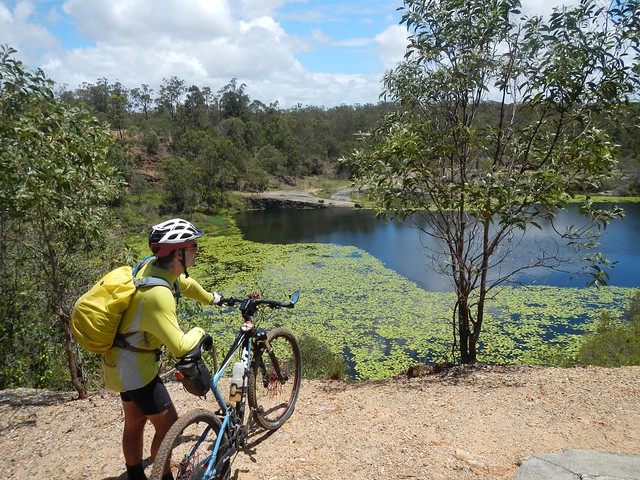 I felt like doing a big ride today, so my friend Dean agreed to accompany me on a long cross-town ride from my place to Daisy Hill. The plan was to try to stick to Bikeways as we rode the 75km across town, then do a few off-road tracks at Daisy Hill Conservation Park, then I’d finish the ride by heading west across town to visit my parents at Forest Lake.

It was also a chance to fill in some of the “missing links” on my global ride map. 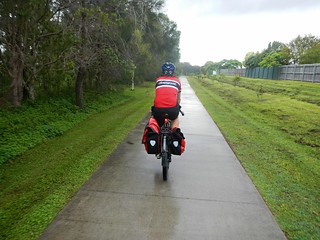 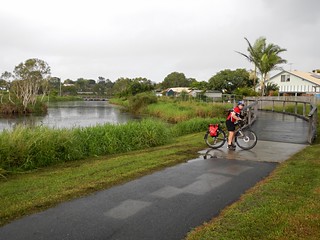 Dean surprised me when he turned up on a fully laden Salsa Fargo touring bike, complete with panniers and bottle holders on the forks. It weighed a ton – which is saying something because a lot of my mates tell my I should send my bike to weight watchers.

As if on cue, as we started the ride, the rain started falling, so our first few kilometres along the bike paths were in cool humid dampness – which was actually more comfortable than riding in the blazing sun. 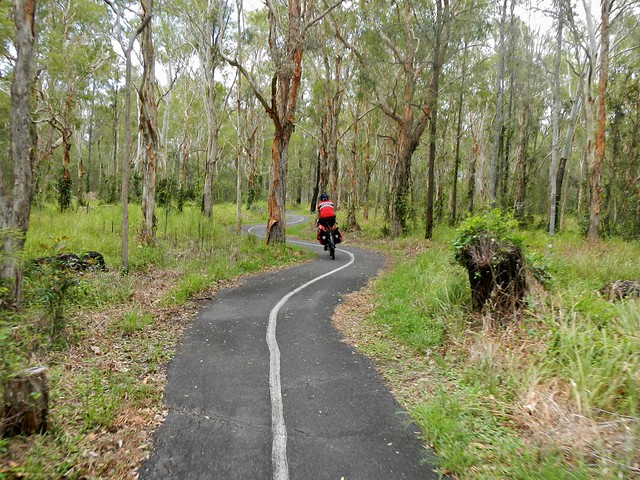 Before long we were winding through the swampy She-oak and Paperbark forests of the Boondall Wetlands. I love this part of the Moreton Bay Cycleway. Being so peaceful makes it hard to imagine that this track is so close to the busy Gateway Arterial Road.

And since I was in a lazy mood, I just stuck behind Dean all of the way, in his slipstream. He’s a strong rider and we were able to maintain some really fast speeds as we powered along the cycleway in our mini peloton of two mountain bikers. 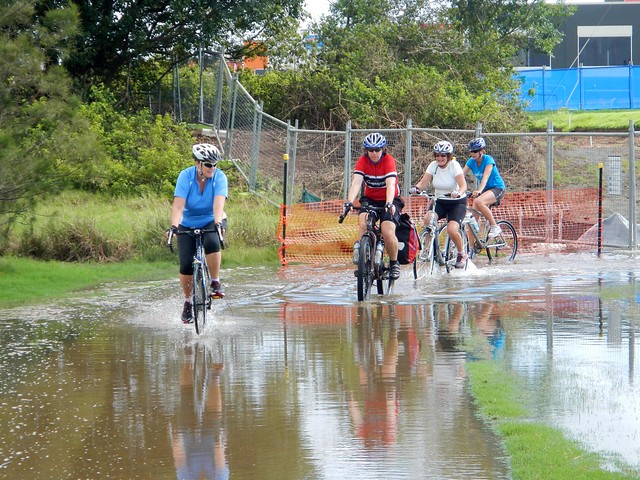 A combination of high tides and recent rain meant that the track was slightly flooded in one or two places. 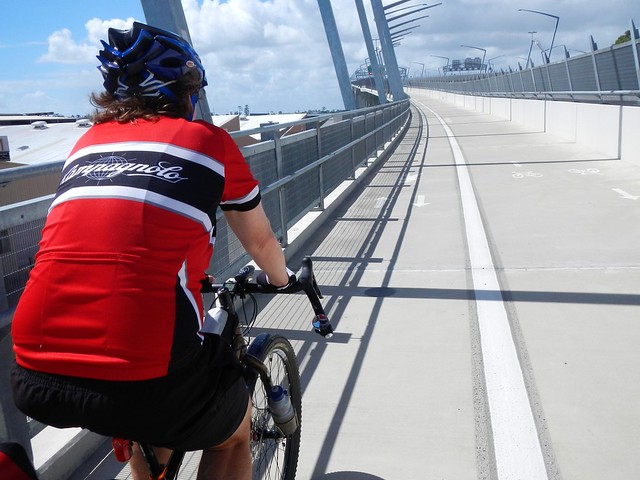 Eventually we reached the Gateway Bridge and made our way over the slow hump of the bridge and down the other side. 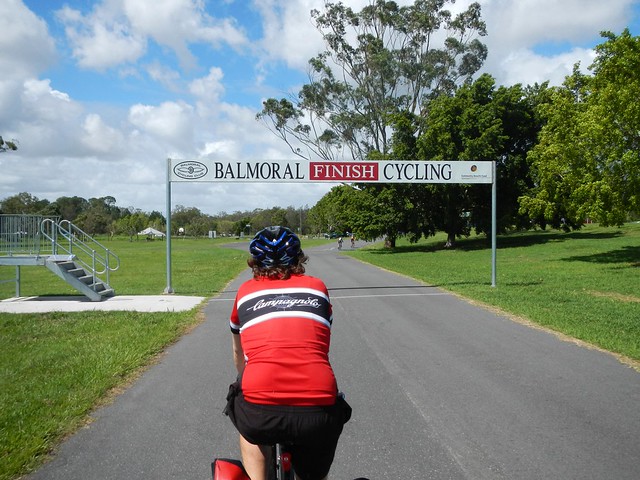 From there we rode through the Minnippi Parklands towards the Critereon track at Murrarie. Since I was still tailgating Dean and riding in his slipstream, he passed the Finish Line on the track just a split second before I did 🙂 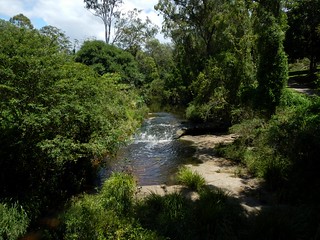 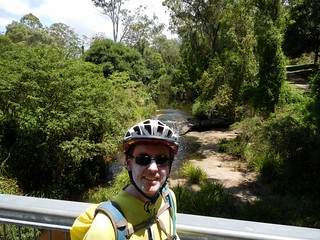 We continued to head south, towards Daisy Hill along the Bulimba Creek bikeway. 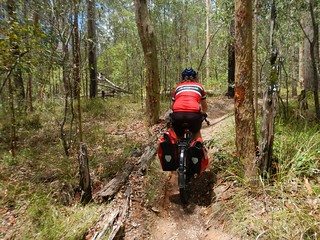 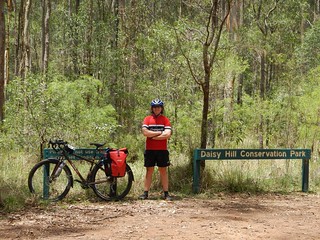 When we eventually reached Daisy Hill, Dean led me up “Second Coming” track near the Buddhist Temple on Underwood Road. It was amazing to watch him push this heavy bike with no suspension along some winding steep single track. The bike rattled a bit on the bumps, by Dean handled it really well. 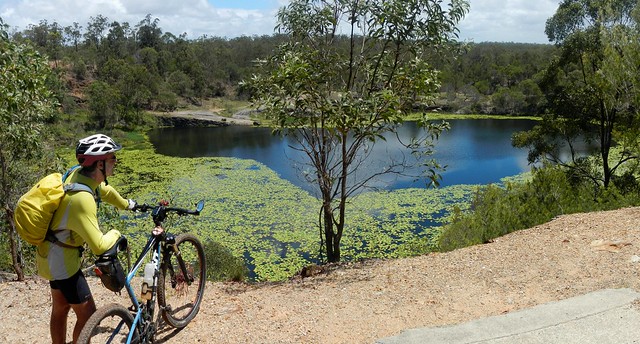 We rode down “Stringybark” trail and did a loop of the Quarry Lake in Neville Lawrie Reserve. By this time the sun was high in the sky, the day was starting to get hot, and I was sorely tempted to ditch my gear and jump in the water. I think Dean was relieved when I decided not to 🙂 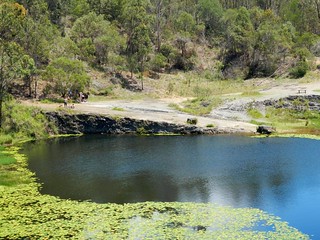 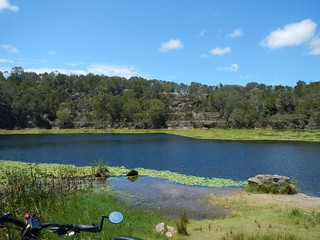 Next time I’m there, I’ll definitely jump in. The water looked great on a hot day. 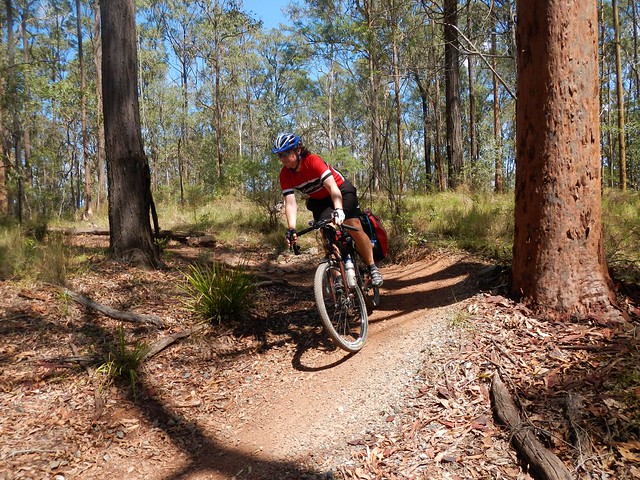 From there we headed up to the “Top Carpark” to top up on water, before riding down “Possum Box”. 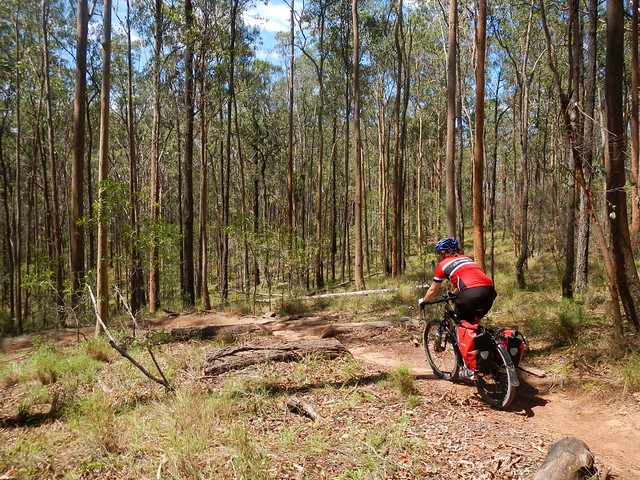 And I got a lesson from Dean in how to ride a heavy no-suspension touring bike on some twisty single tracks.

Including the last leg of my ride to Forest Lake, I rode a total of 117km in just over 6 hours (excluding breaks). I burned 5,100 kcal and climbed a total of 1,150 metres. Riding this with Dean made it much easier – especially being able to slipstream him, and to benefit from his knowledge of where to go in a part of town that I don’t normally ride. I’ll rate this 8.5 out of 10 on the tough-o-meter. But if I did it solo, I’d probably rate it 9.5 out of 10.