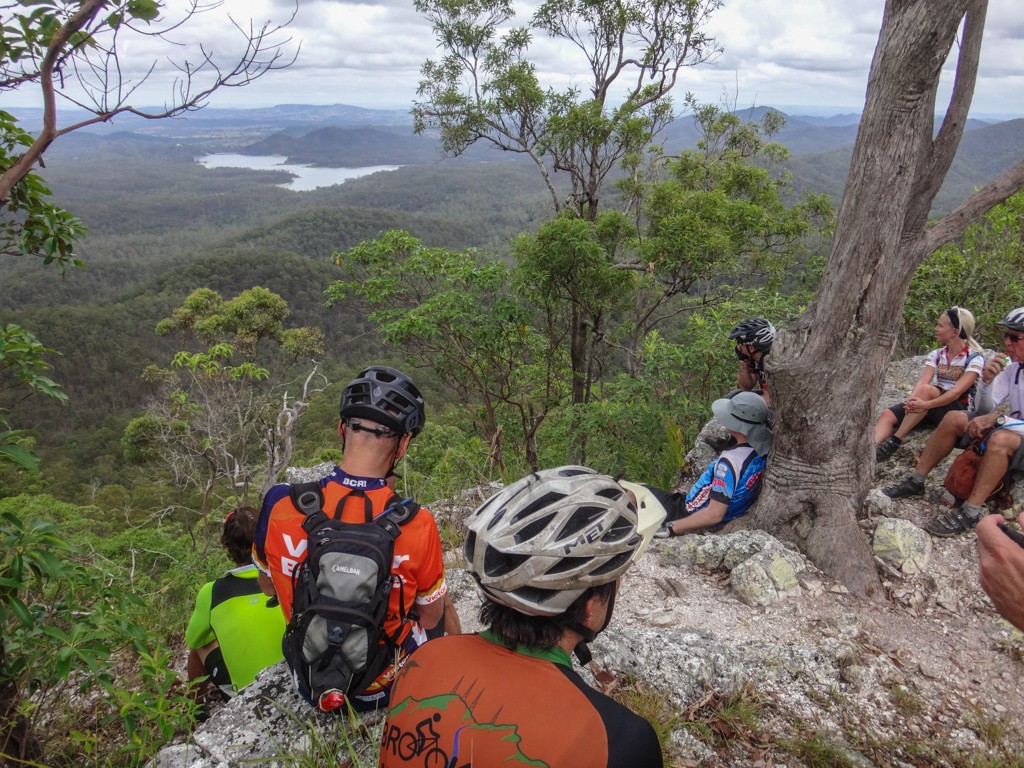 “It’s going to be hilly” I warned my friends before we embarked on this adventure which involved a hill-top loop between Gold Creek Reservoir and Mermaid Mountain. 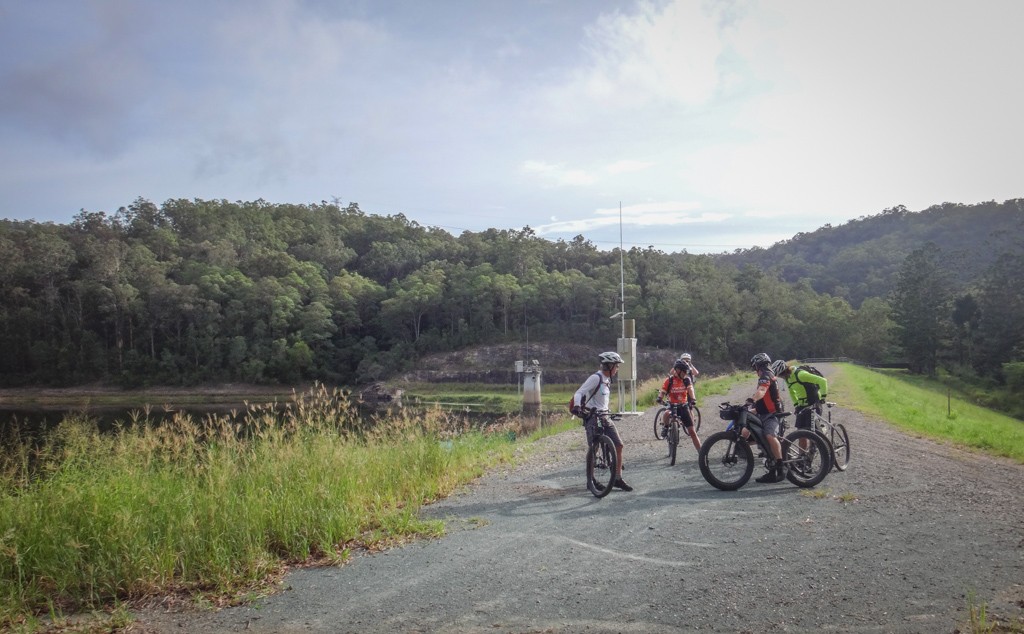 I had ulterior motives for wanting to ride here. There was a gap in my Ride Map near Mermaid Mountain that had been there for five years. It was time to close it.

We started our adventure near the dam wall at Gold Creek Reservoir. 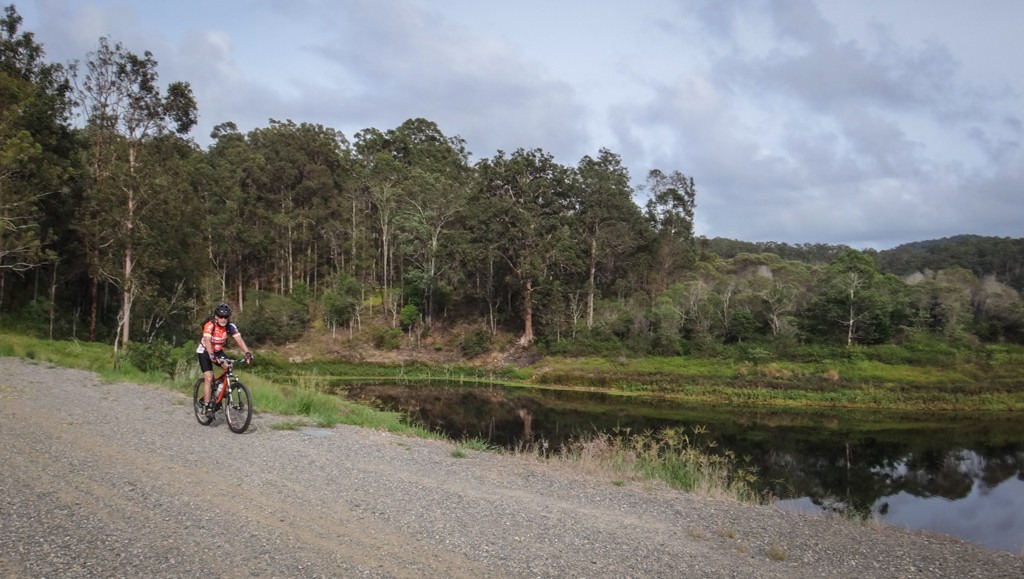 Set in the foothills of the D’Aguilar Range near Brookfield, this small reservoir was built in the 1880’s to supply water to the growing town of Brisbane. It was higher in elevation that Enoggera Reservoir, which meant that water from Gold Creek could be piped to some of the higher areas of Brisbane without using pumps.

Gold Creek itself was named after a small amount of alluvial gold was discovered in the creek in the 1860’s. 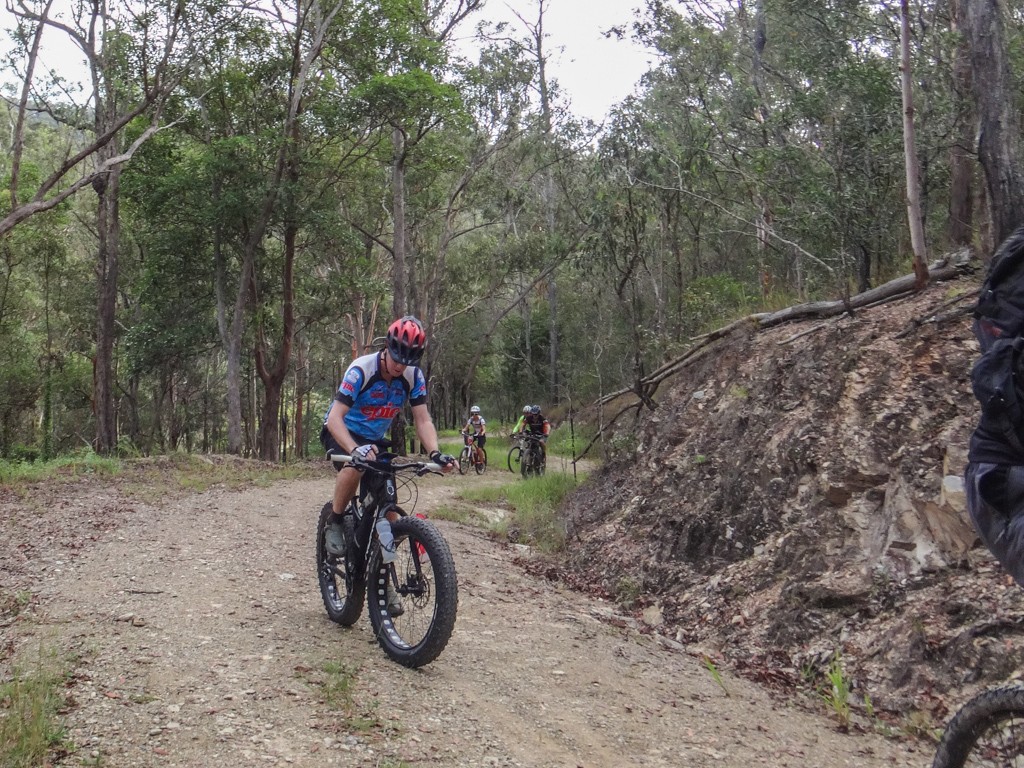 There was no warming up. The ride started with a large steep climb up the trail to the west of the dam. 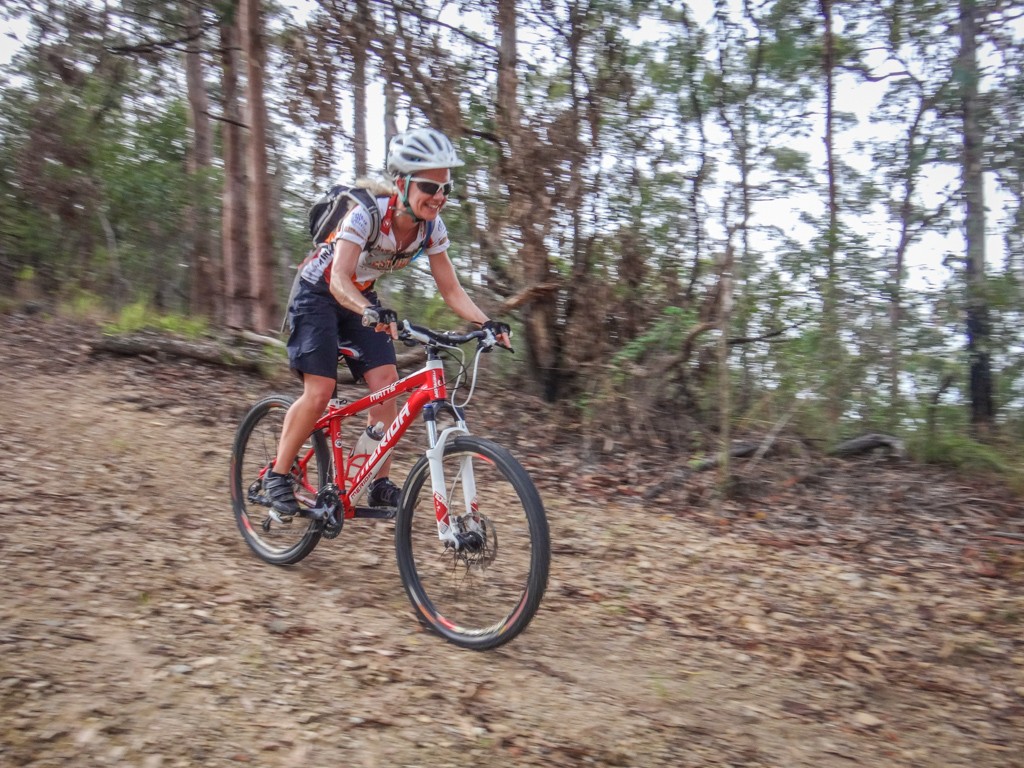 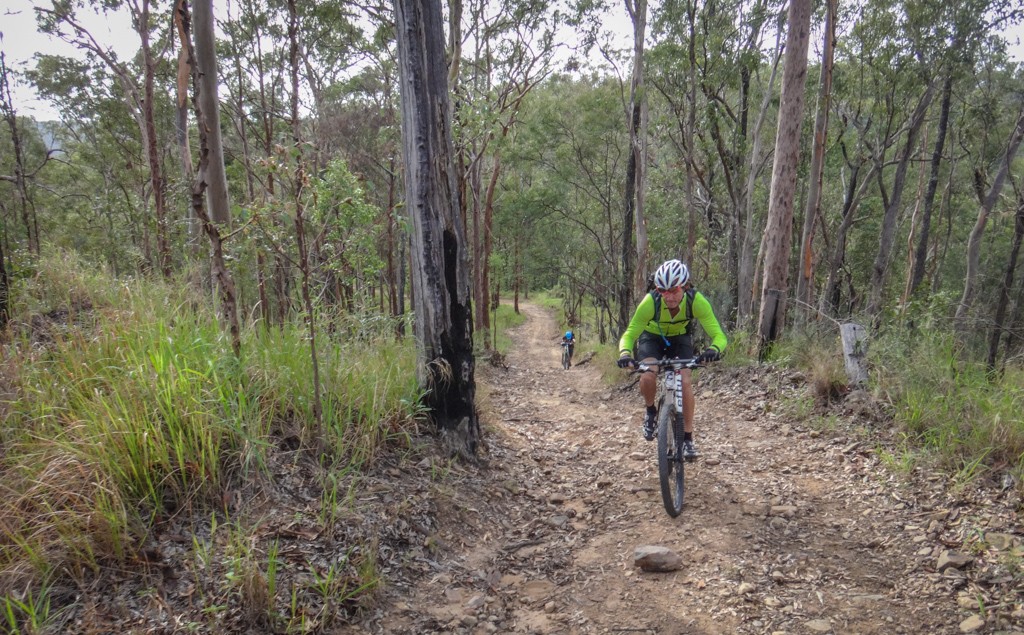 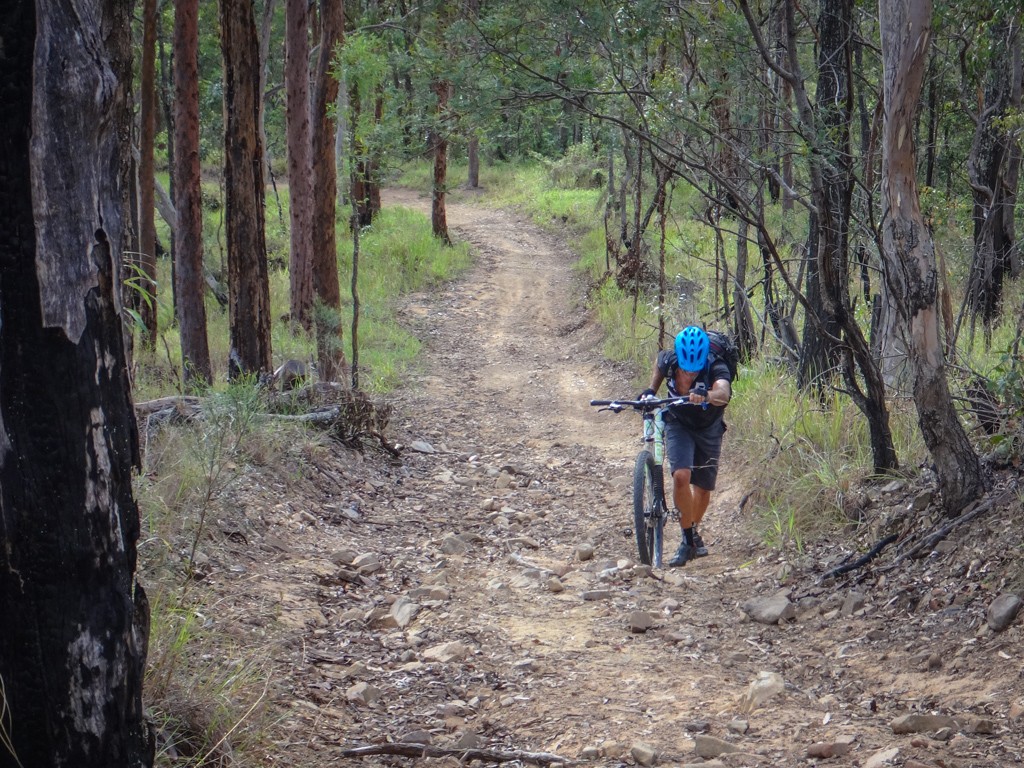 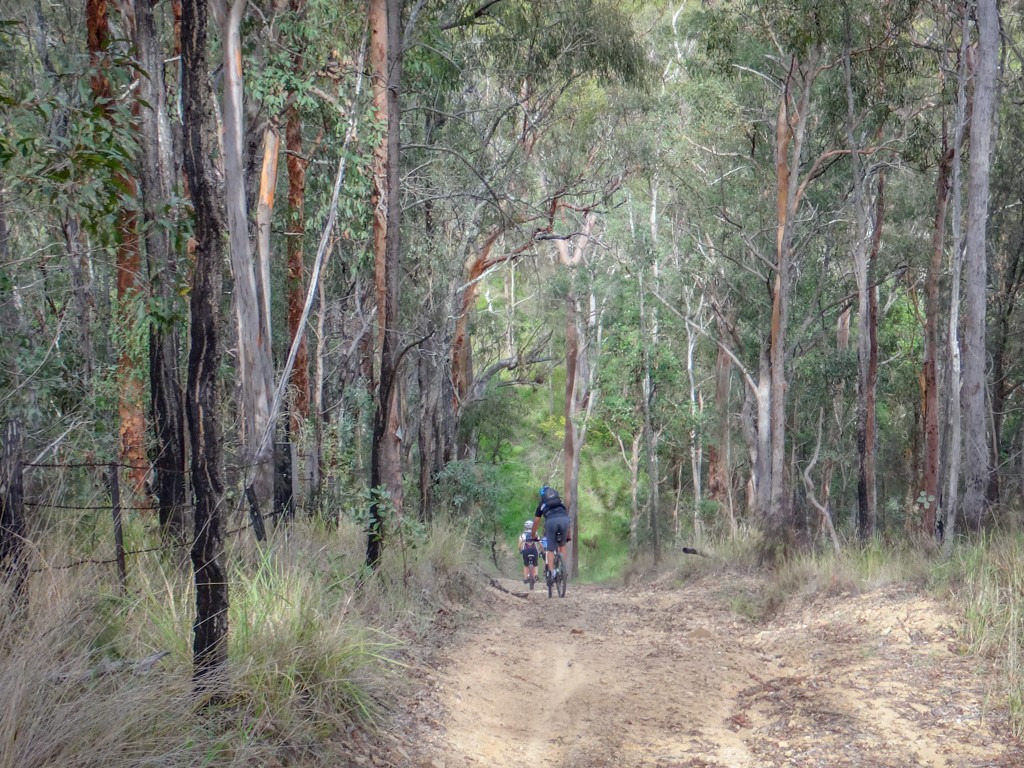 Some of the descents were very loose. We skidded down them, unable to stop, trying hard not to fall off. 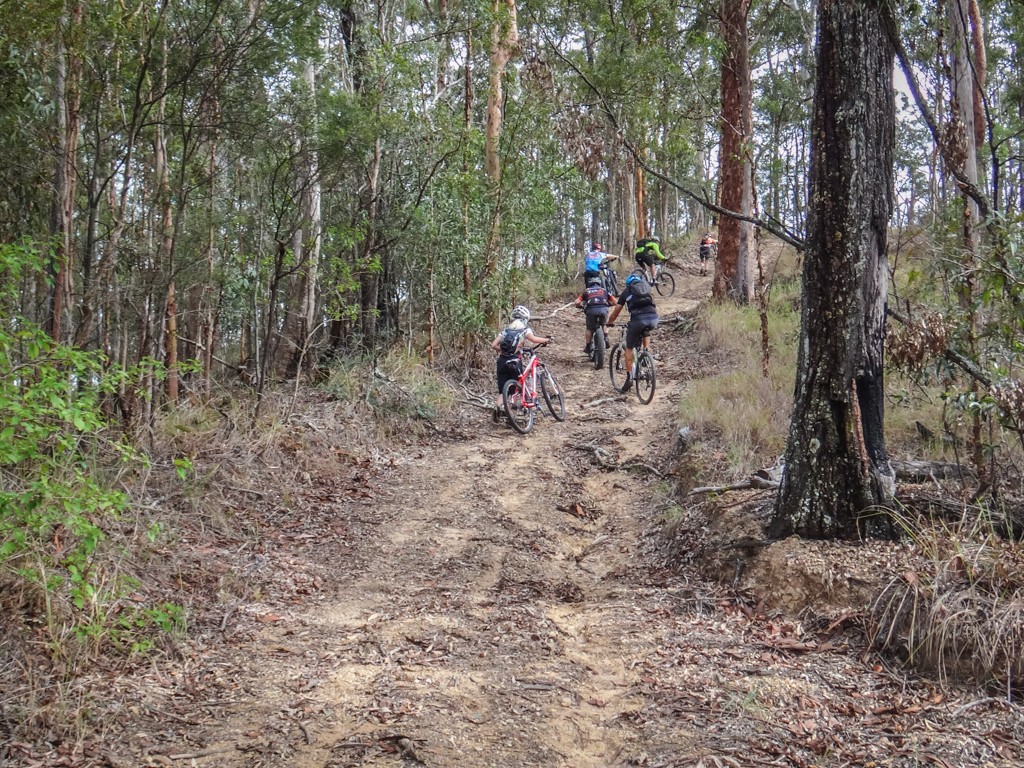 Some uphill sections were barely ride-able… 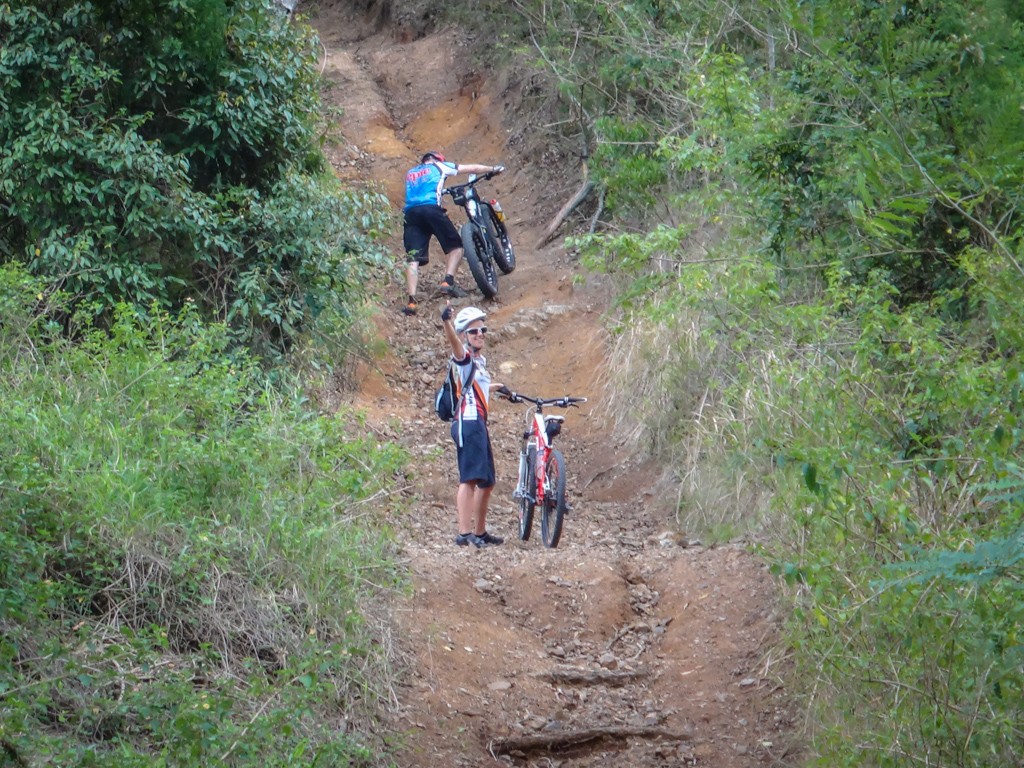 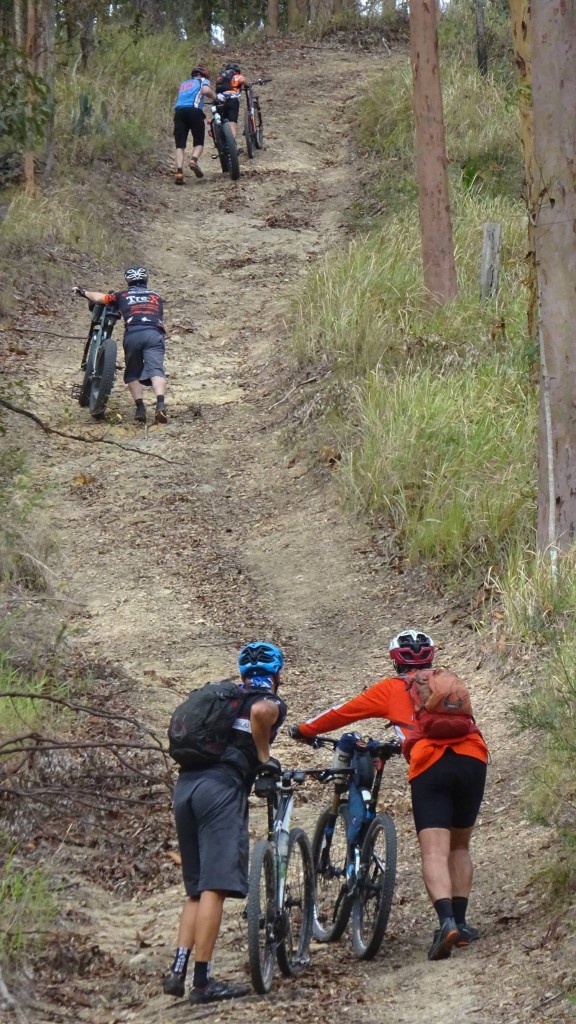 Other sections were barely walk-able 🙂 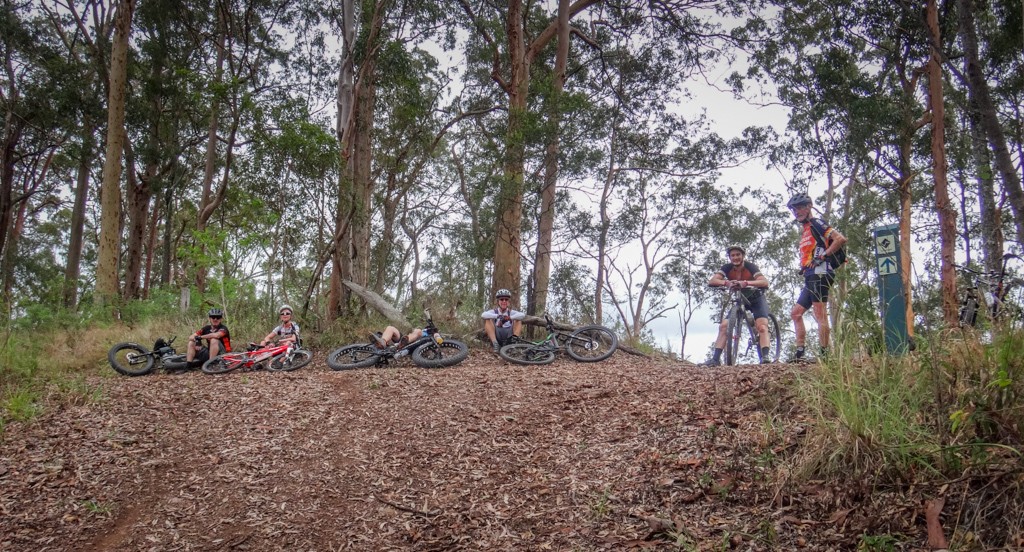 Eventually we took a break at the top of a hill to catch our breath.

I was pleasantly surprised when my friend Lance showed up out of nowhere. He lives close by and had shown me around this part of the forest several years ago. 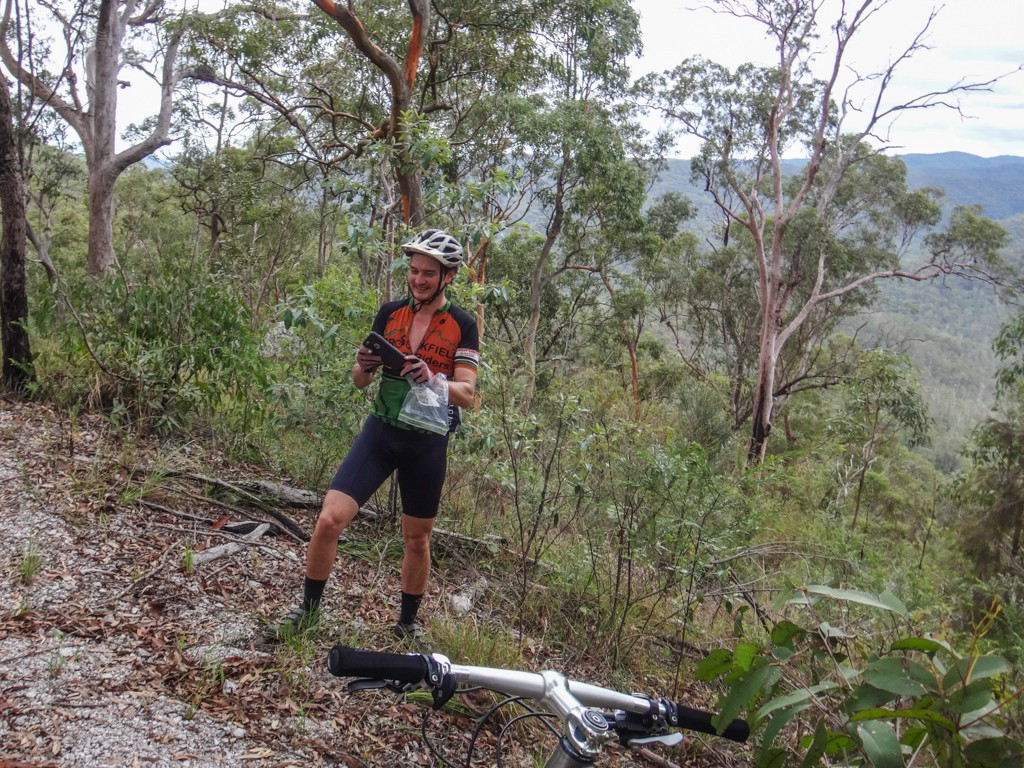 Although he was feeling tired from the riding he had already done today, Lance kindly agreed to ride with us to Mermaid Mountain and show us an easier way back. 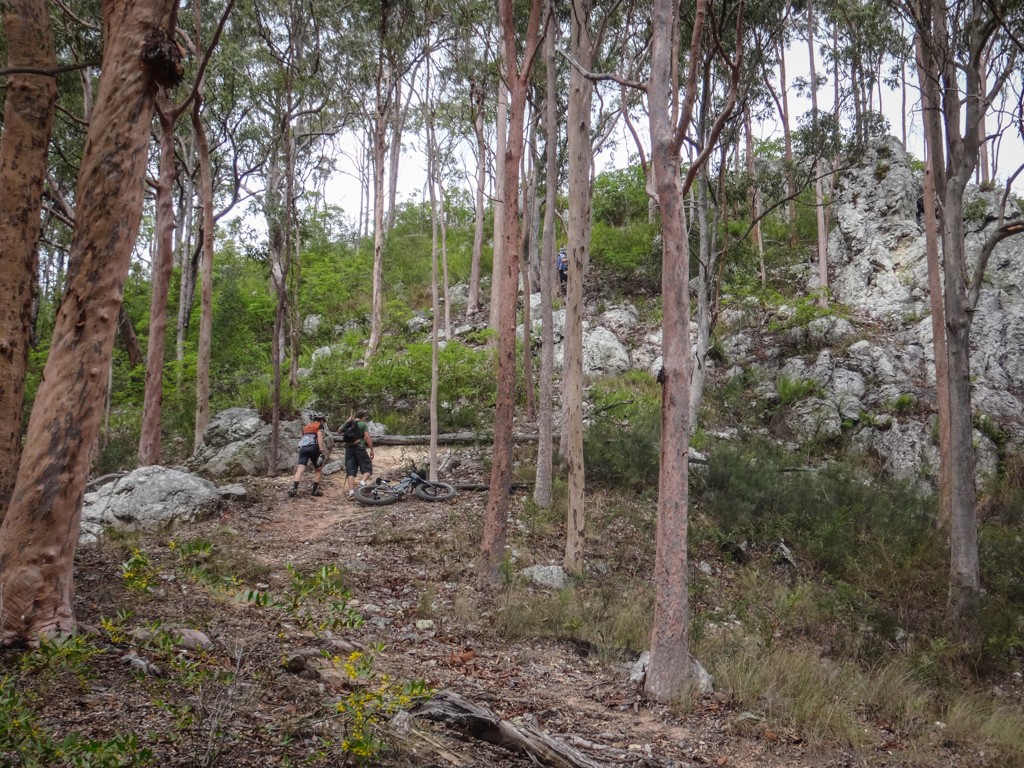 We ditched the bikes and walked up the tracks near the summit of the mountain. 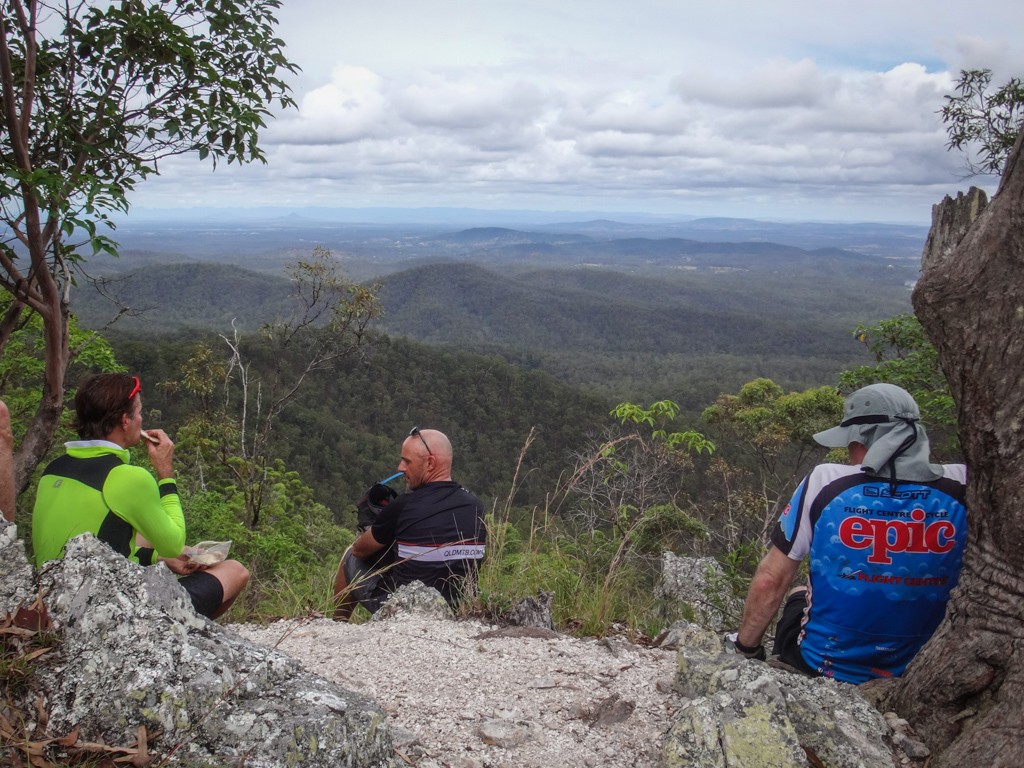 The views (as always) were worth the effort.

Behind the city of Ipswich to the south we could see Flinders Peak, and behind it Mount Barney. On our right we could see Lake Manchester. 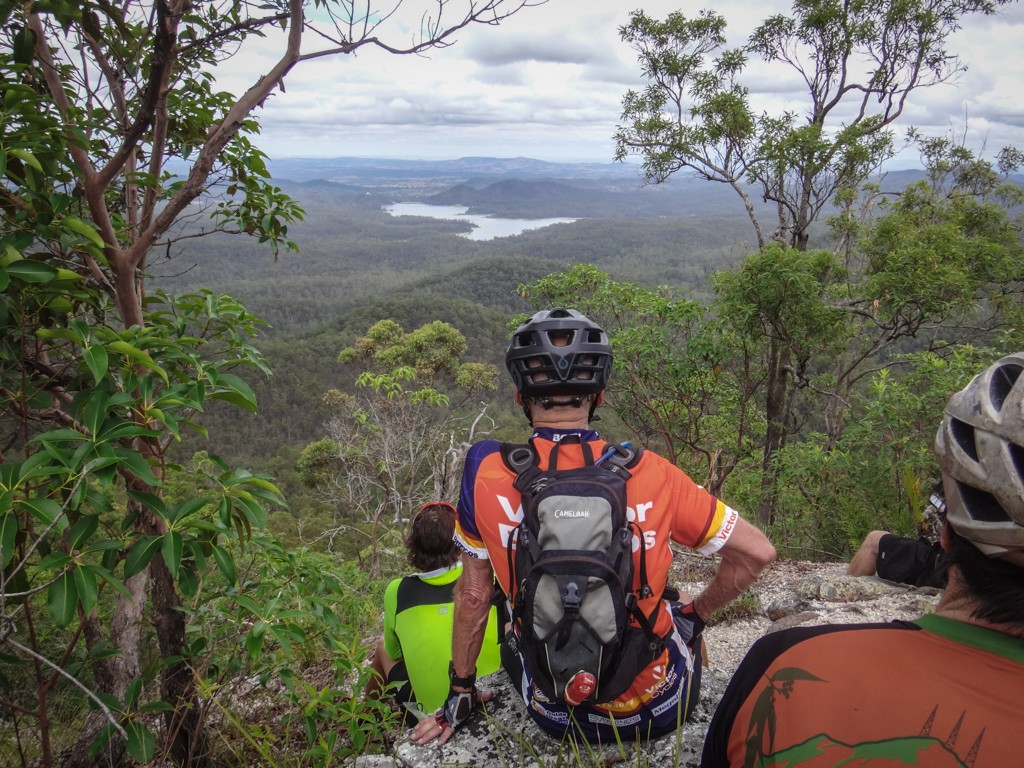 I suspect Mermaid Mountain is named after the ship HMS Mermaid used by John Oxley when he visited Moreton Bay in 1823.

Oxley rowed up the Brisbane River in Mermaid’s small whale boat as far as present day Goodna. A couple of years later, Edmund Lockyer sailed into Moreton Bay aboard HMS Mermaid. He rowed further up the Brisbane River than Oxley, this time getting as far as Cressbrook Creek (not far from where Toogoolawah presently stands). At one section of the river, near where Karana Downs is today, the summit of Mermaid Mountain is clearly visible. My guess, therefore, is that Edmund Lockyer named the peak in 1825 after the famous ship.

If you’re reading this, and can confirm this or know otherwise, please let me know. 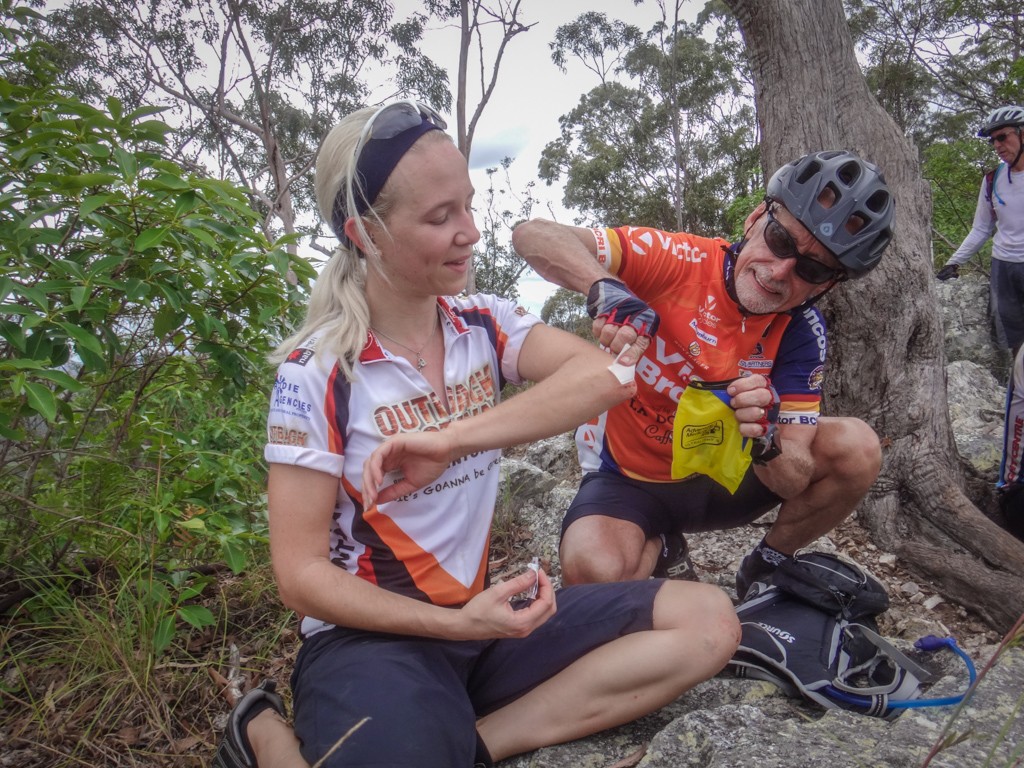 Raquel fell off her bike while riding down one of the steep descents.

John had a brand-new unopened first-aid kit and couldn’t wait to try it out on a new patient. 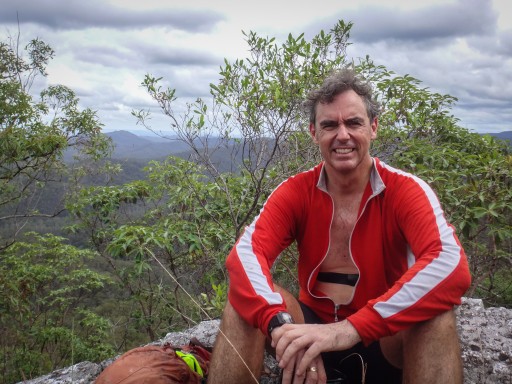 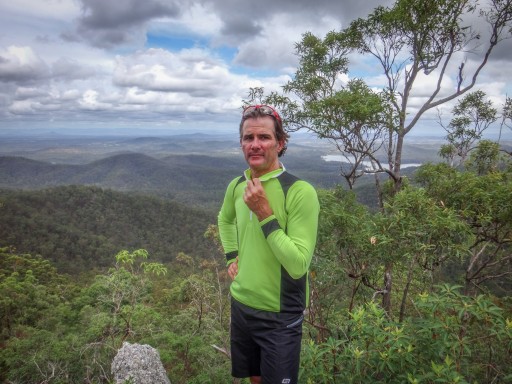 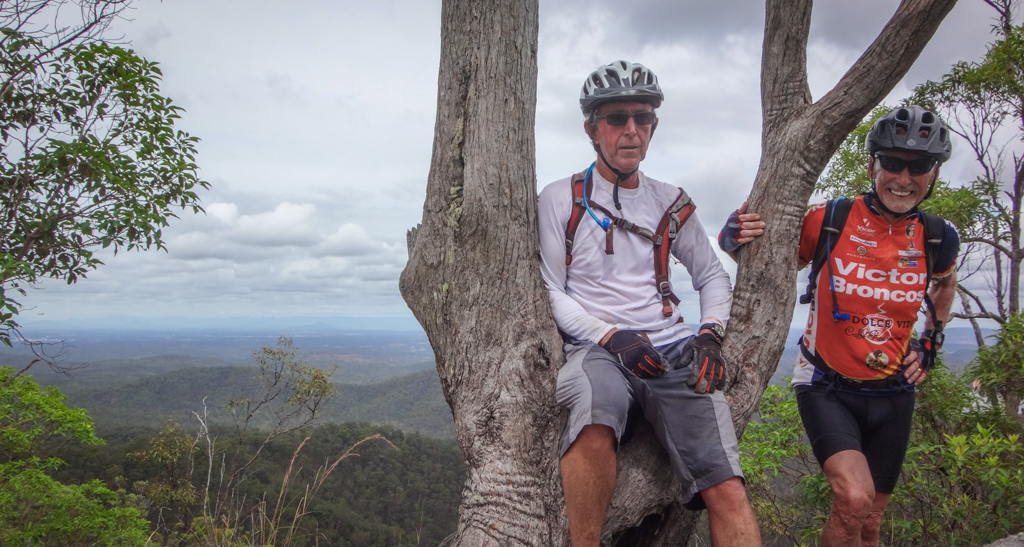 The rest of us rested, had a snack, and enjoyed the view. 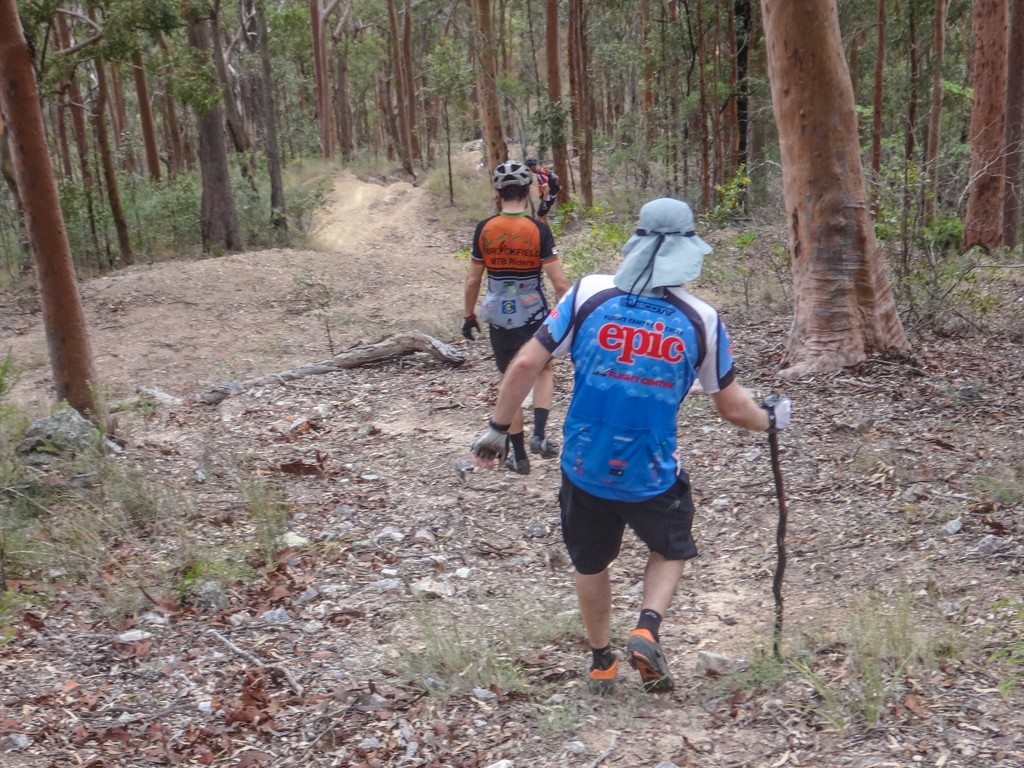 After that we scrambled back down the slope to the bikes.

Adam looked like a young Moses with his wooden staff and tied-off floppy hat, although I’m not sure if this slippery slope would lead us to the promised land 🙂 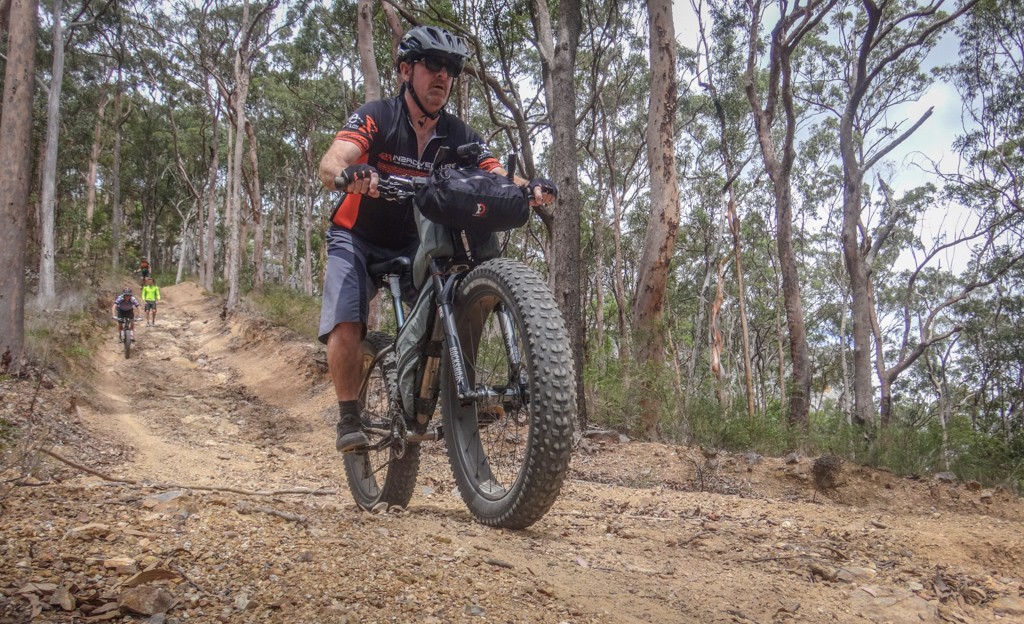 The wide tyres of Darb and Adam’s fat-bikes were perfectly suited to the soft sketchy surface. 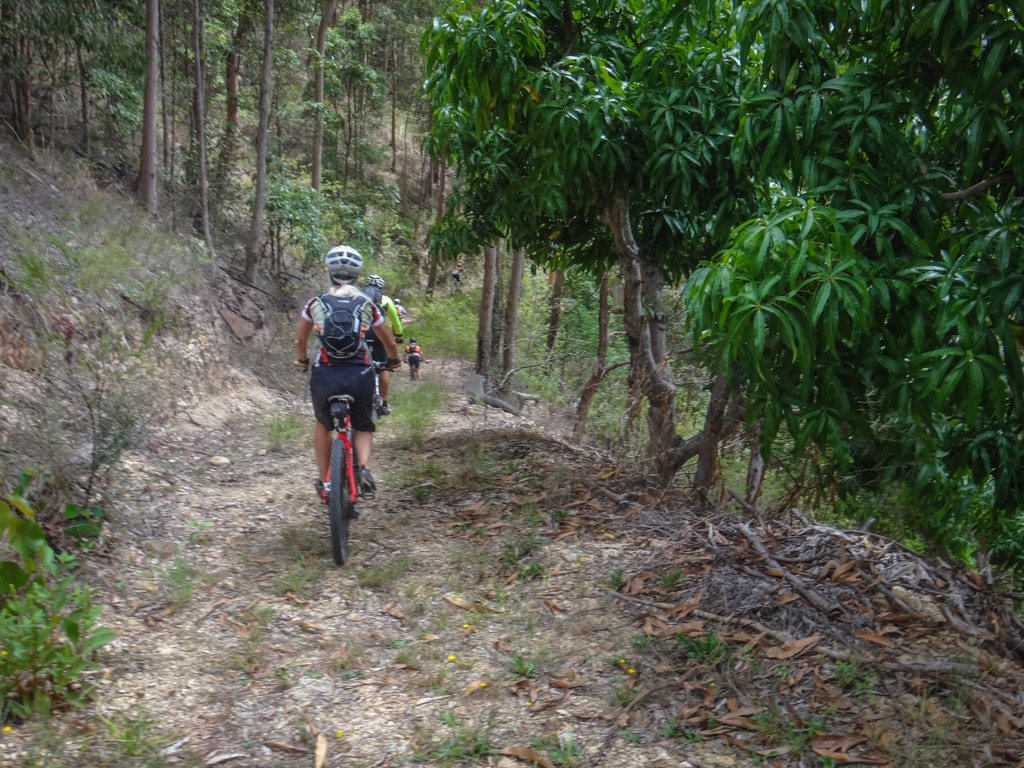 Before leaving us to go home, Lance took us back via an easier route through his neighbour’s Mango orchard.

This saved us from having to scramble up and down one very steep hill. 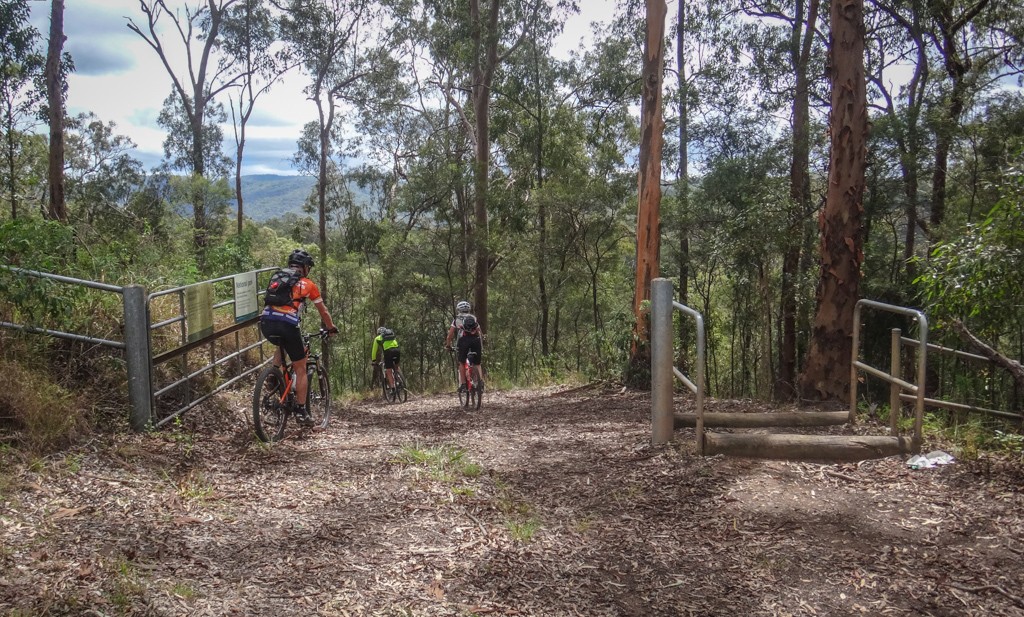 Eventually we reached the intersection which would lead us to the return-leg of our trip.

The steep uphill scrambles were over – now we could enjoy some flatter terrain. 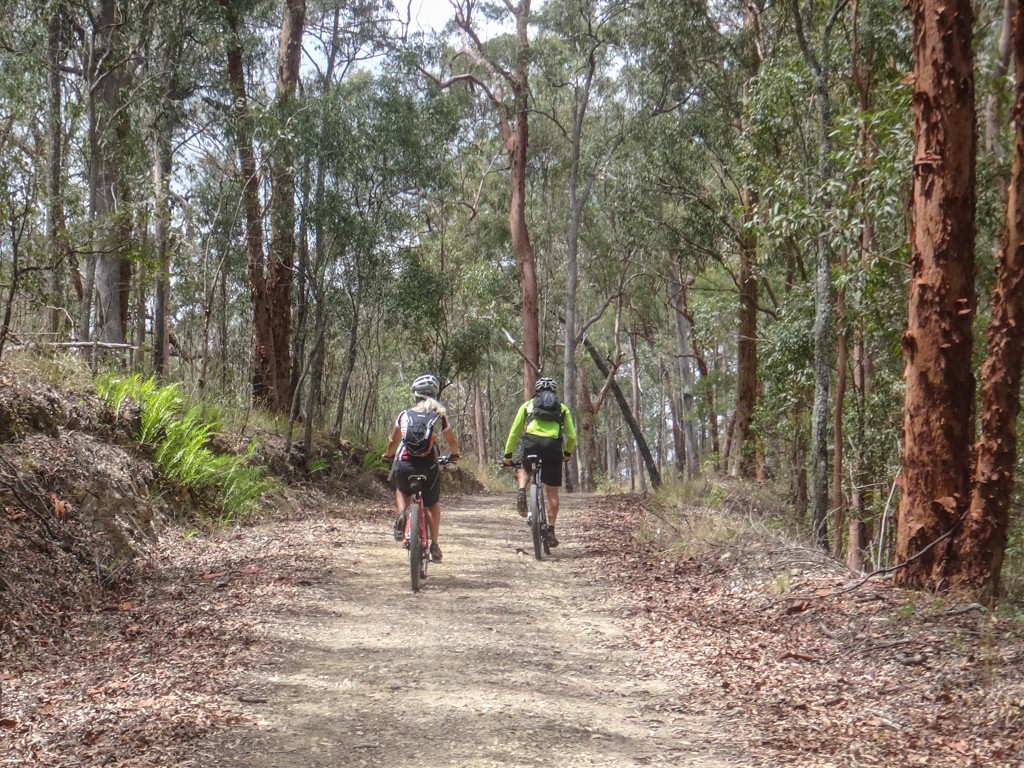 We eventually emerged on South Boundary Road near Creek Road. From here it was a pleasant downhill run for most of the way back to the cars. 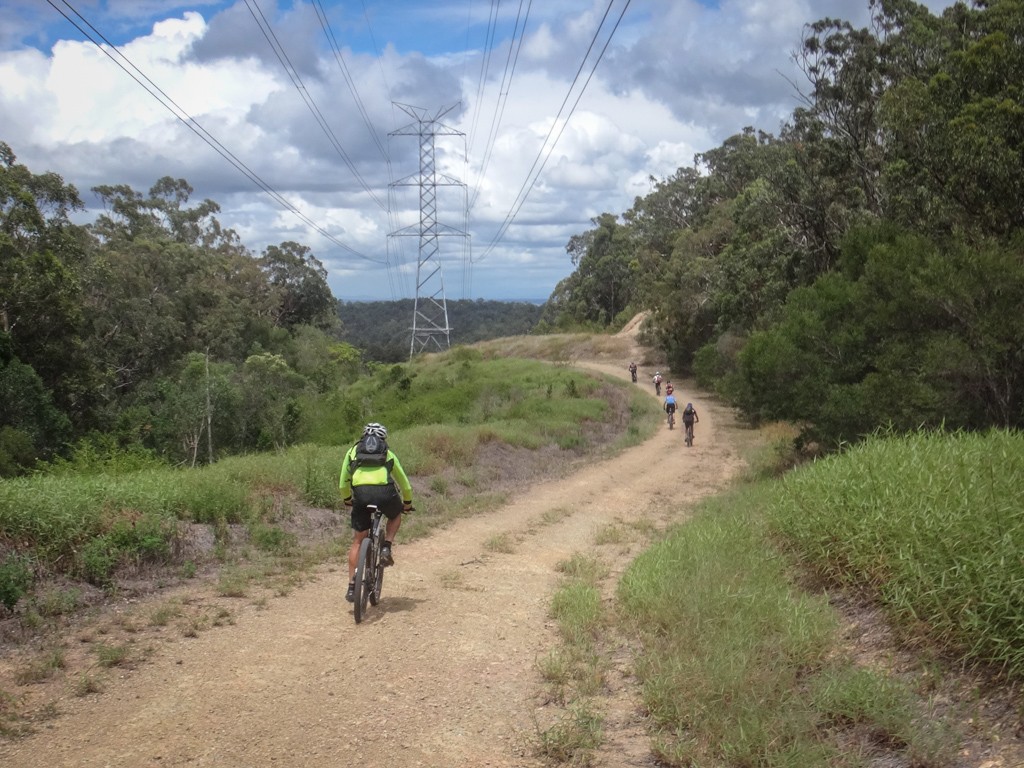 Our final descent followed the power lines down the hill back towards Gold Creek Reservoir. 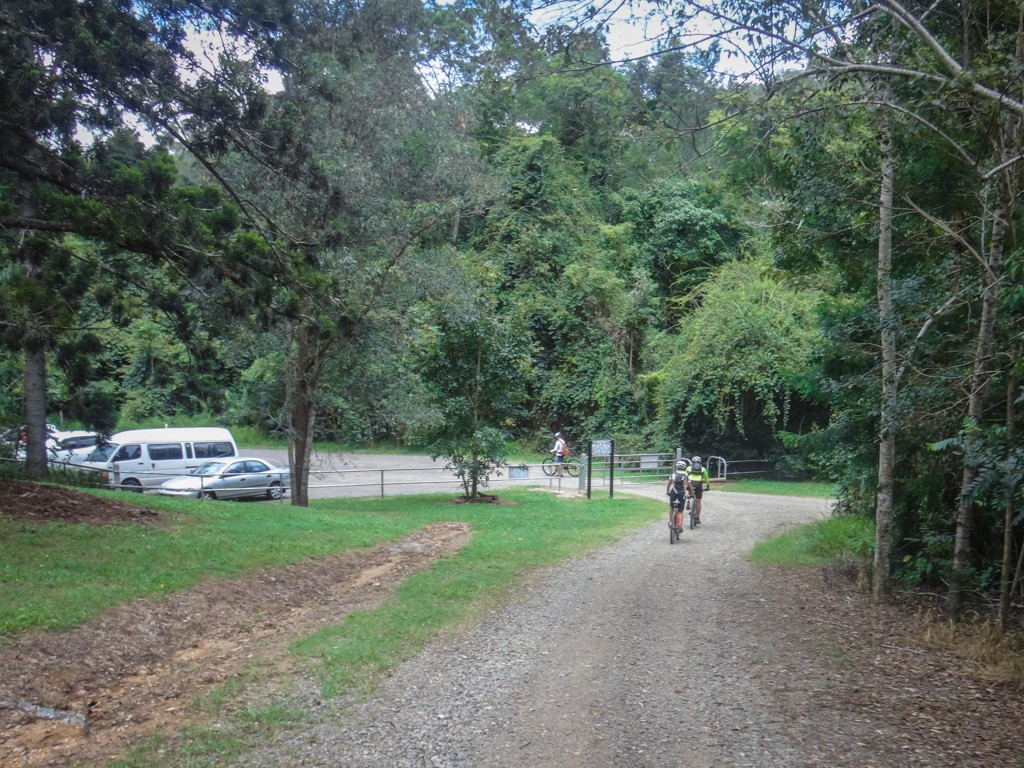 We rode a total of 25 kilometres in just under five hours including breaks.

During that time we climbed about 1,200m in vertical ascent, and I burned about 2,000 kcal.

Despite its short distance, this is a tough ride.

While we had a couple of drinks afterwards, we took a quick poll and decided this one rates about 9 out of 10 on the tough-o-meter. The steep slopes in the first half of the ride are brutal – regardless of whether you’re climbing or descending.

Thanks Eric, Darb, Paul, Jason, Adam, John, Raquel and Lance for a fun day on the bikes. You guys are awesome. 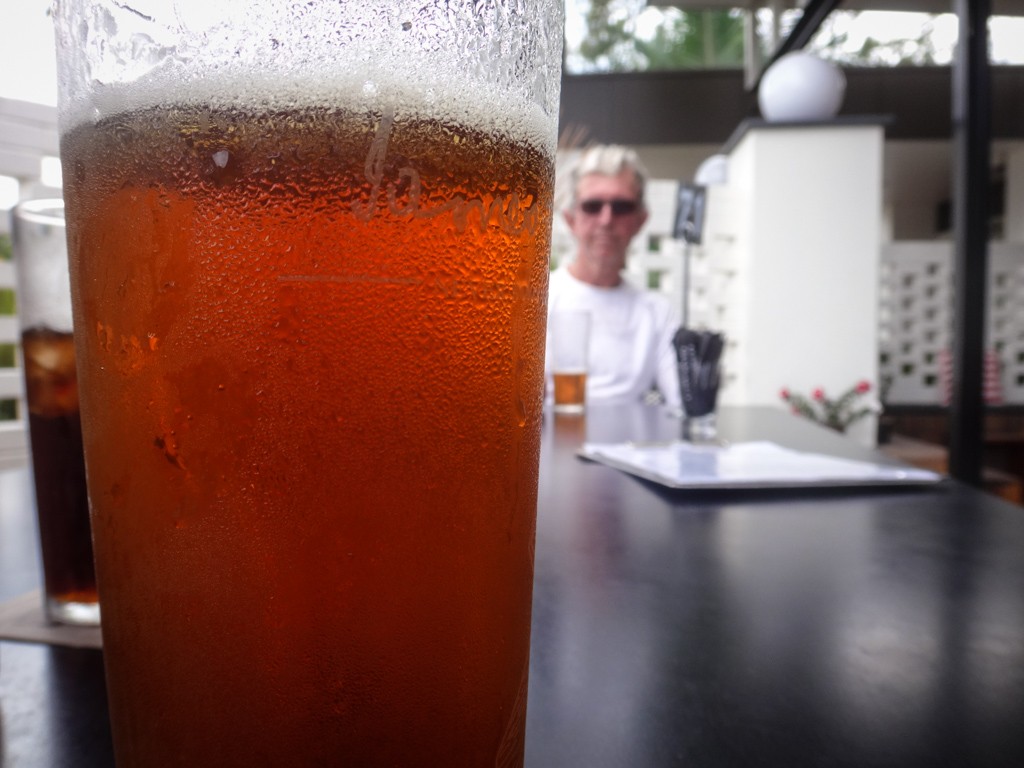 8 Replies to “Gold and Mermaids”