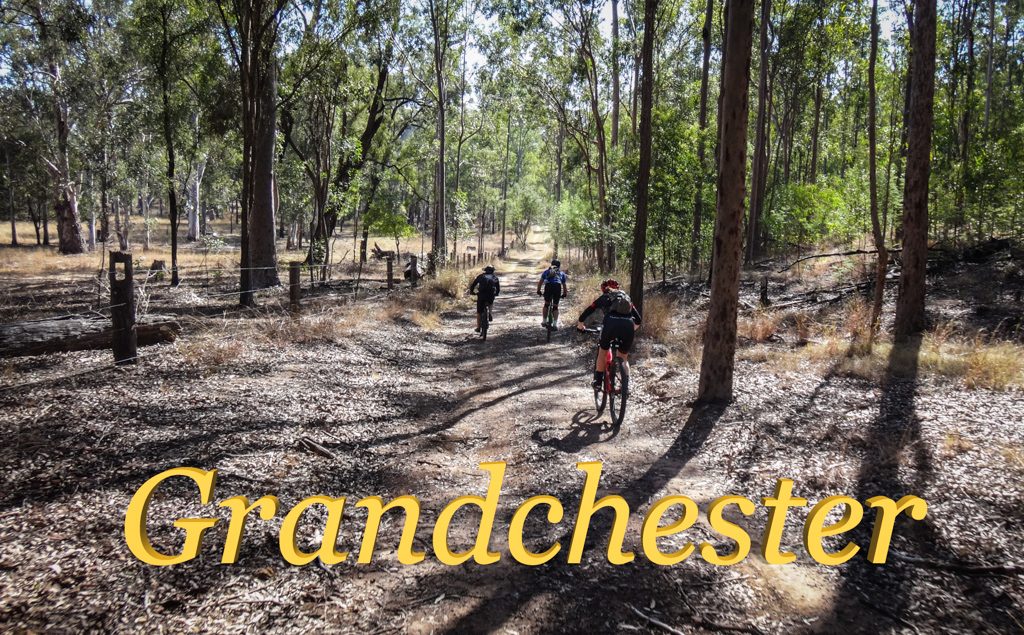 The Mount Grandchester Conservation Estate is a large area of bushland owned by the Ipswich City Council.  When I found out about this amazing place, I just had to check it out. 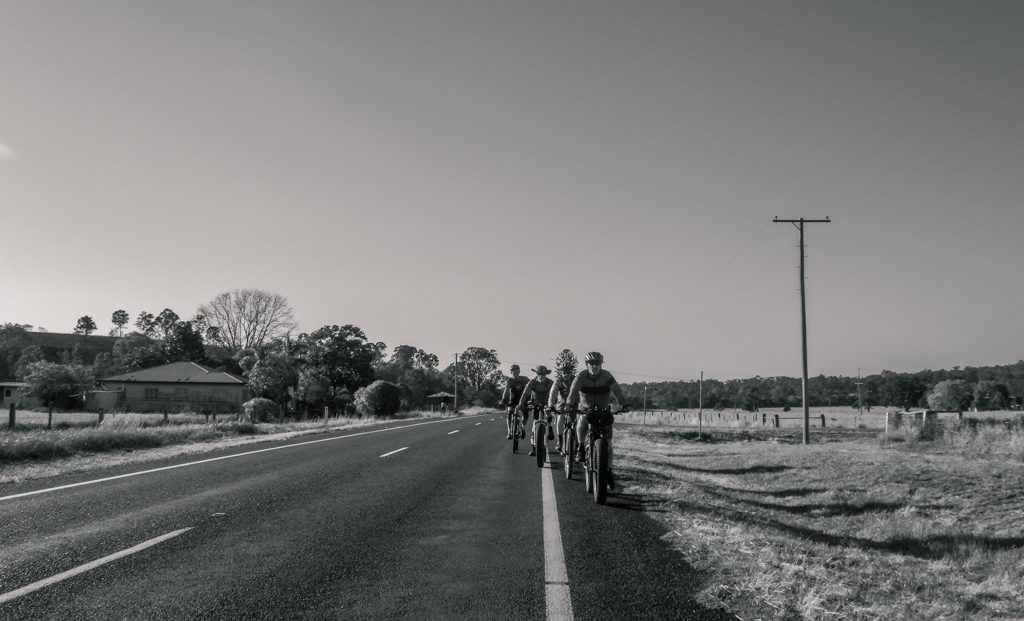 We started at the small town of Grandchester, near Ipswich. 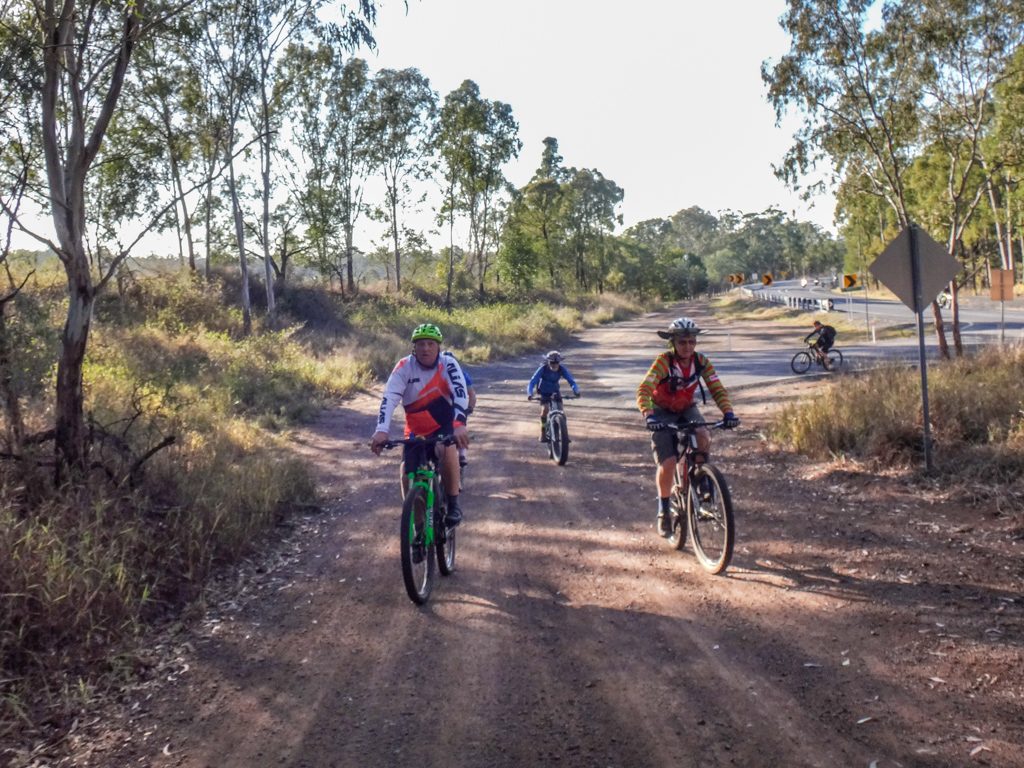 After a few minutes we left the busy road, and pointed our bikes up Old Grandchester Road – a bumpy old dirt track which climbs the Little Liverpool Range. 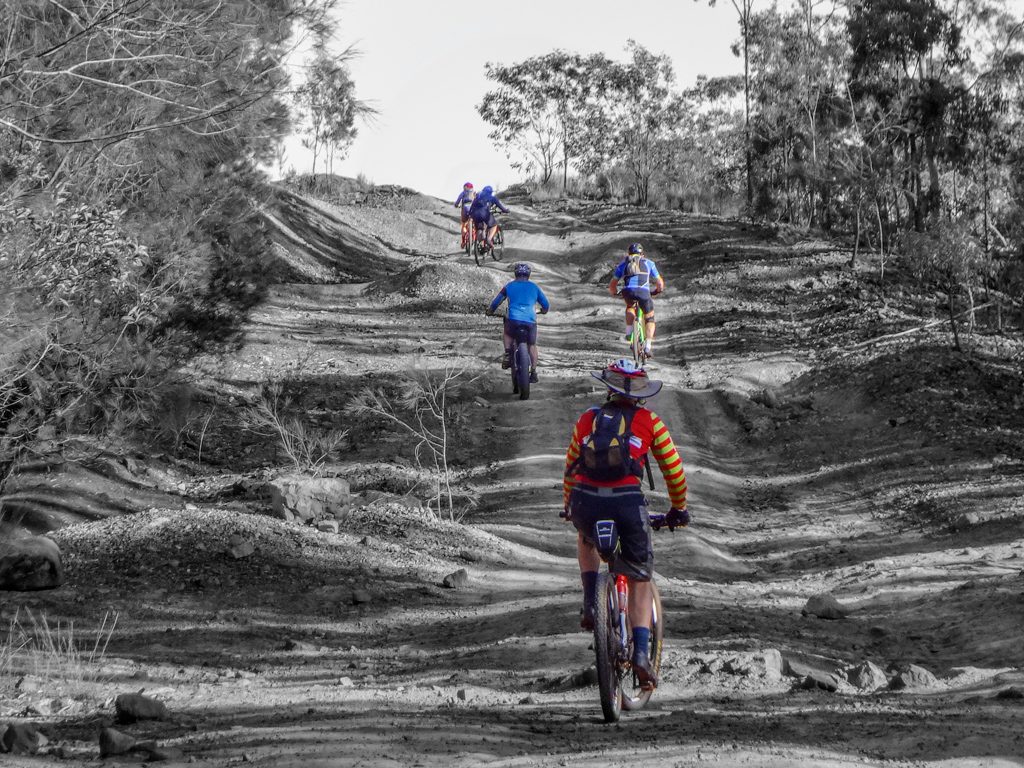 Towards the top if became quite steep.

Rebecca and Jason quickly made it to the top.  The rest of us mere mortals tried to keep up.

A few of us had to push the last few metres.

As I looked back I could just make out Flinders Peak on the eastern horizon.  We’ve had a few fun adventures there as well. 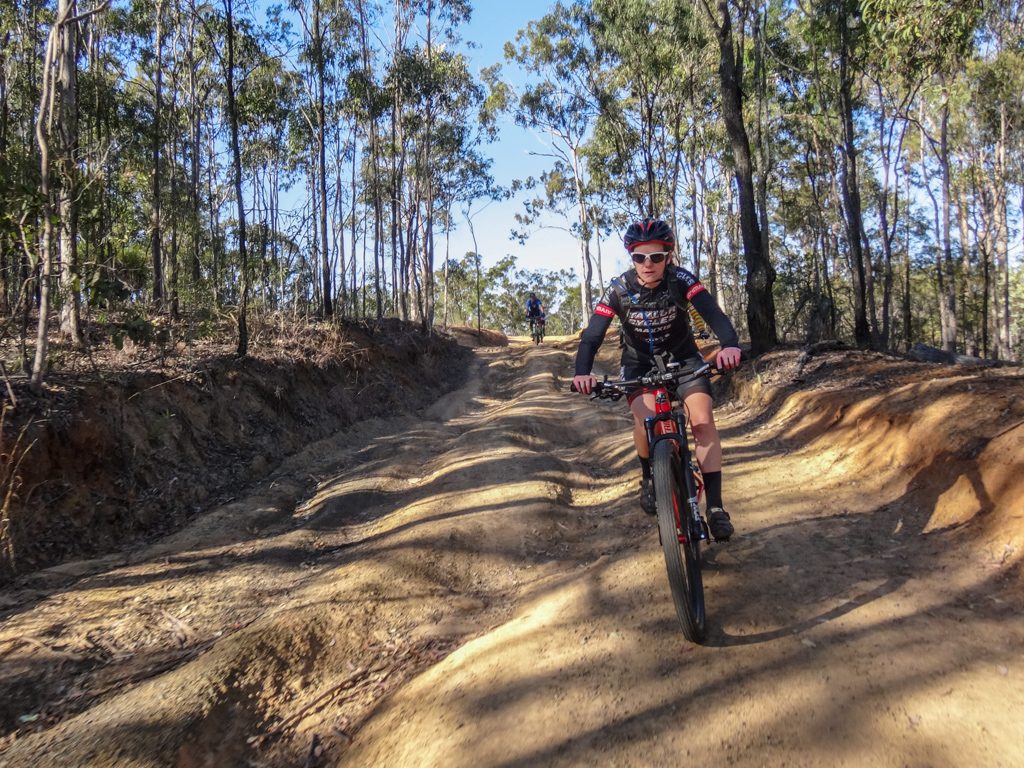 From the top of Old Grandchester Road it’s a short ride to Cunningham’s Rise Lookout above Laidley. 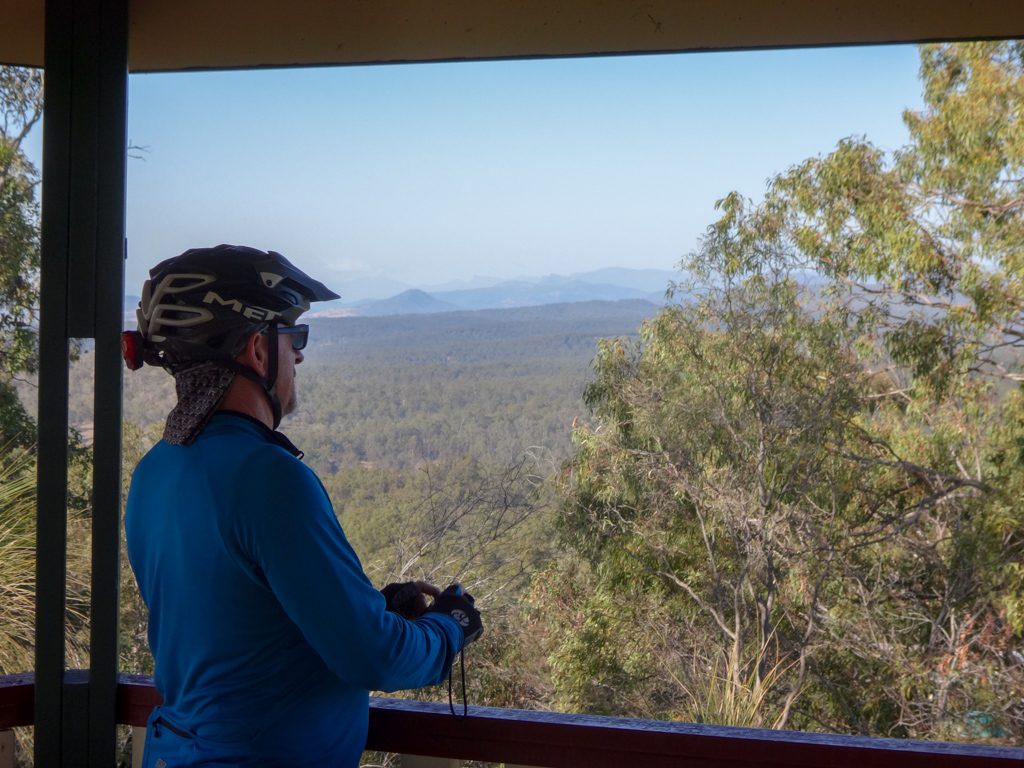 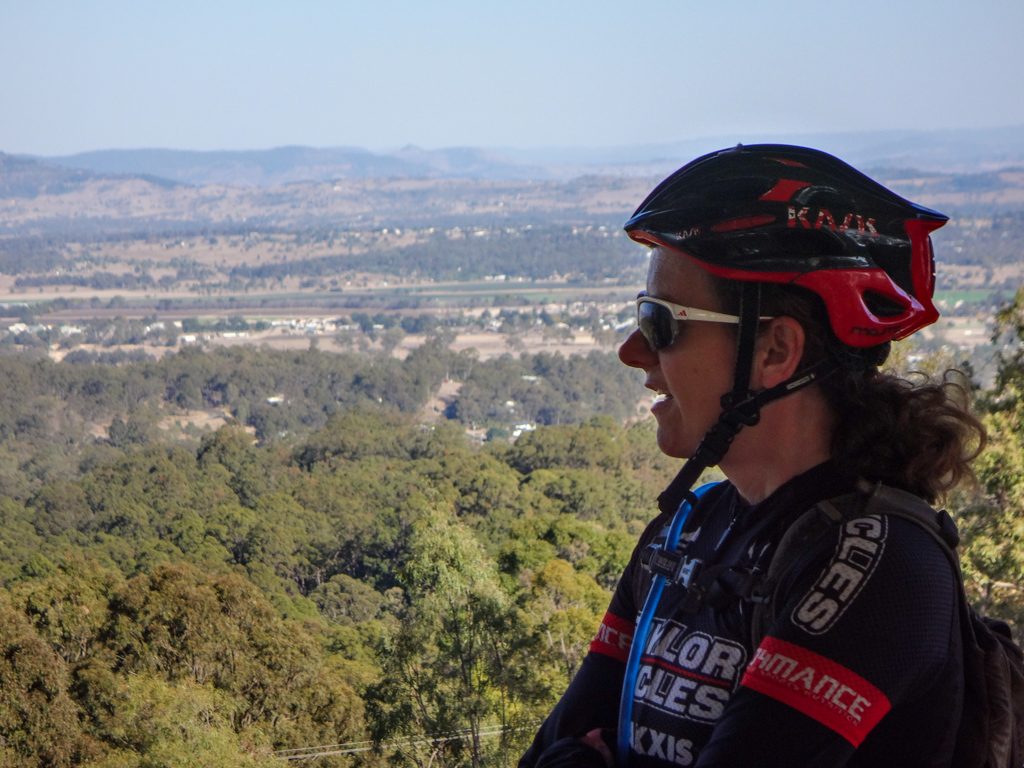 We enjoyed a quick snack at this impressive lookout while taking in the panoramic views.

Allan Cunningham passed this way in 1829.  I’m sure the plains he saw were vastly different from what we saw today. 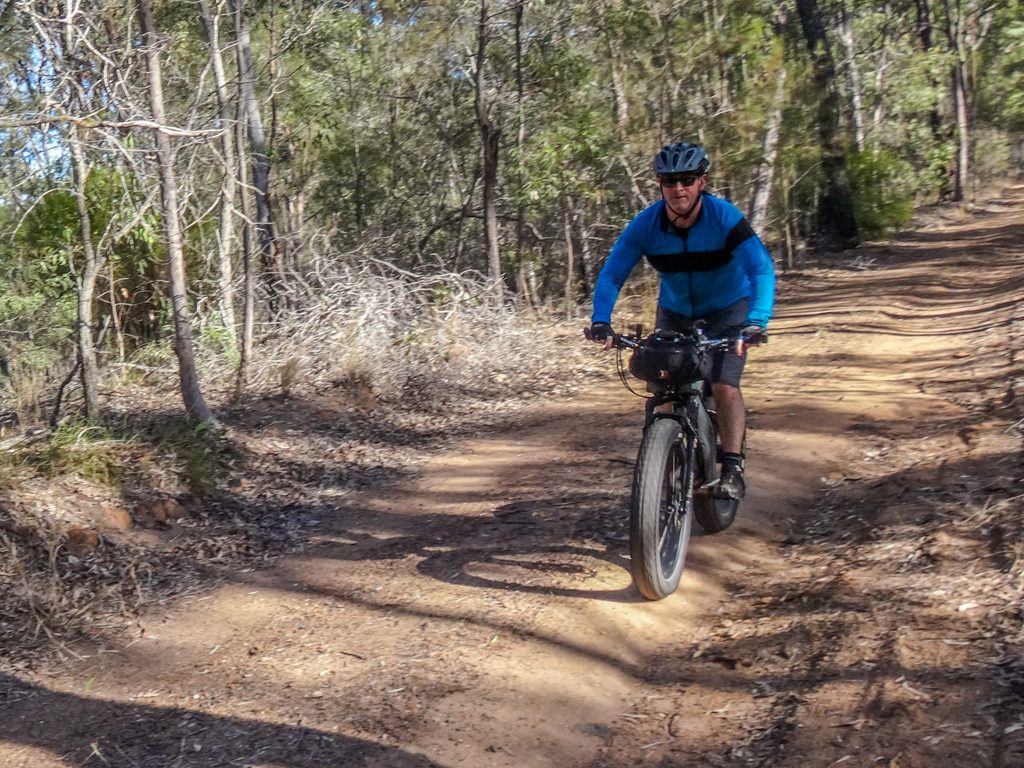 From the lookout we bounced down Summerholm Road for a few kilometres.

At the bottom we climbed Long Gully Road towards one of the entrances to the Conservation Estate. 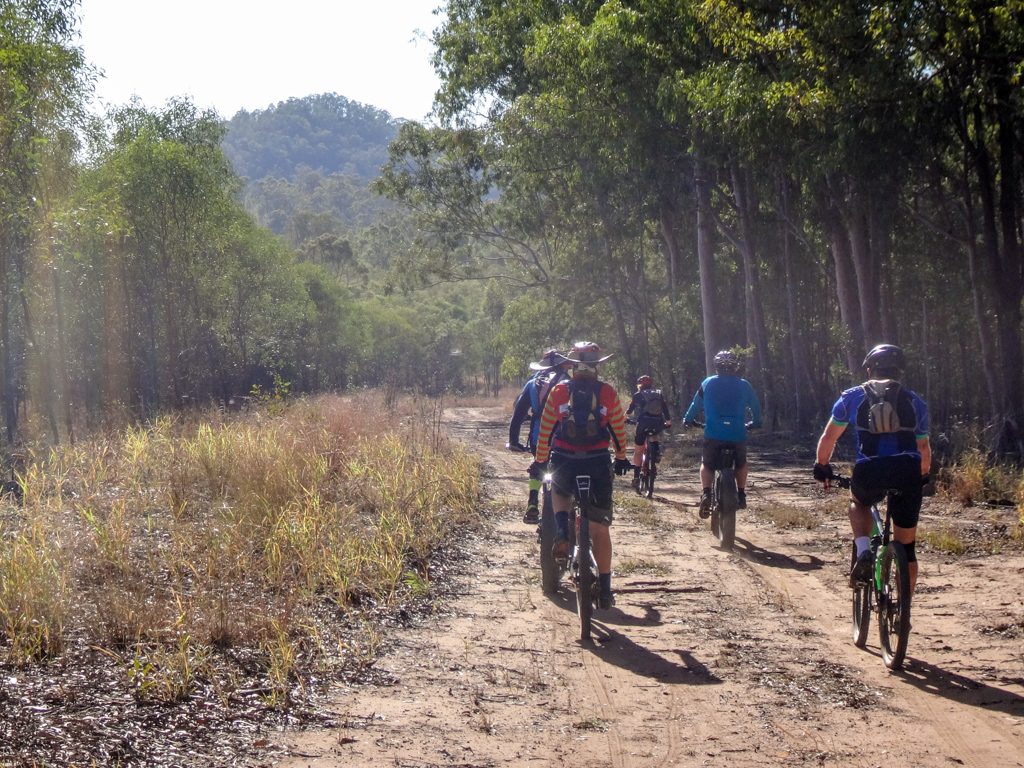 In the distance we could make out Mount Grandchester, the main peak in the park, which is just under 350 metres high. 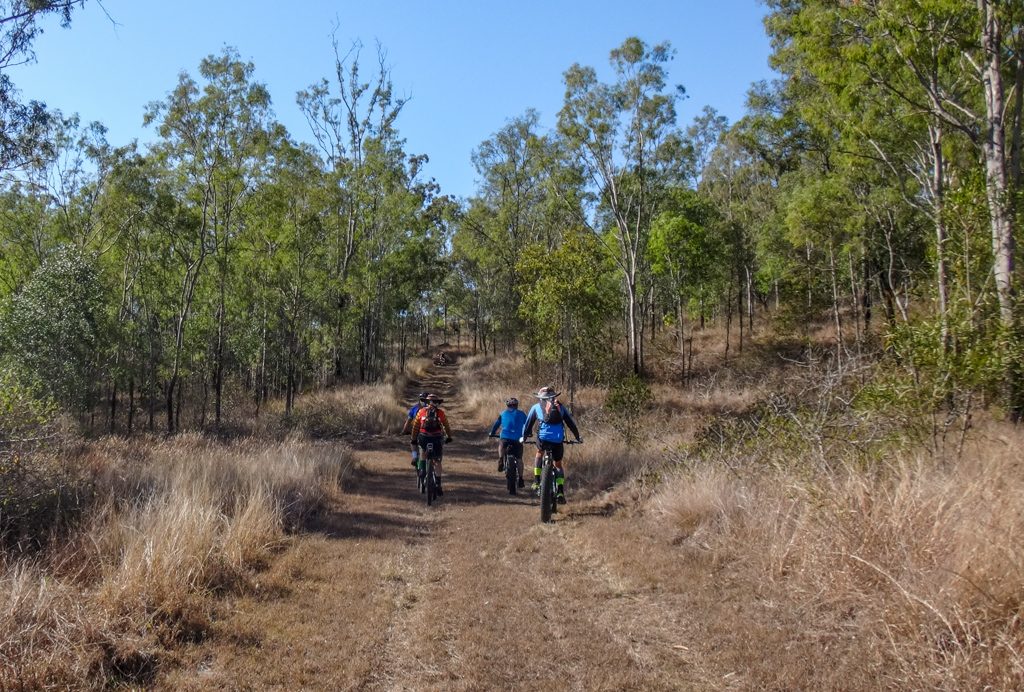 There are dozens of grassy tracks winding through the area.

We followed one track north.

We had ridden some nearby old roads a few years ago, but there were holes in my “Ride Map” which I wanted to close.

My friends were happy to humour me and ride the course I suggested. 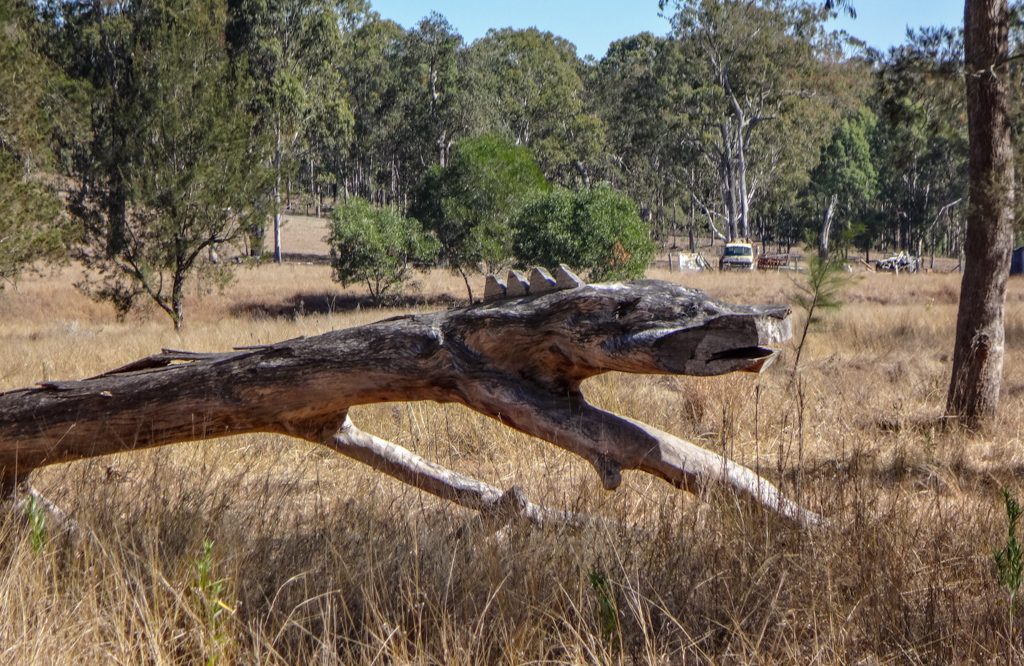 We emerged from the northern end of the estate at Heise Road.

Someone had artistically carved an intimidating reptile out of an old tree.

It stared at us from its paddock.  We stared back and took photos 🙂 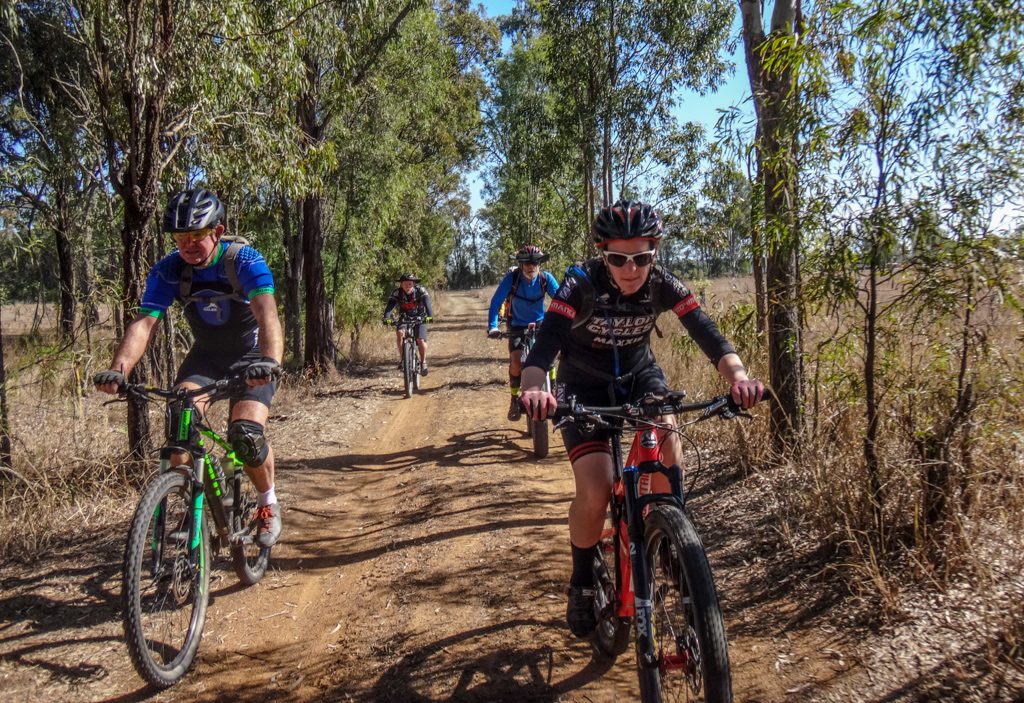 As we followed Heise Road north, it slowly evolved from a bumpy dirt track into a gravel road. 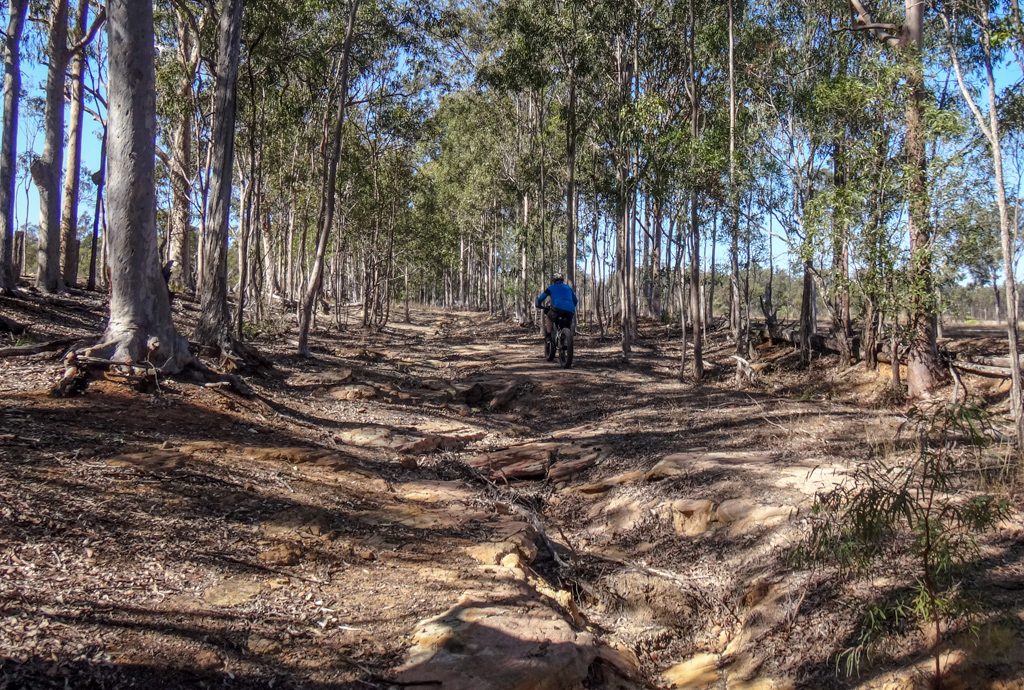 We preferred “the road less traveled” and branched off into Sister Road – a disused road reserve passing between a couple of farm paddocks.

We rode here a few years ago, but it was much smoother in my memory.

Sometimes I think our memories are selective – we forget the difficult things. 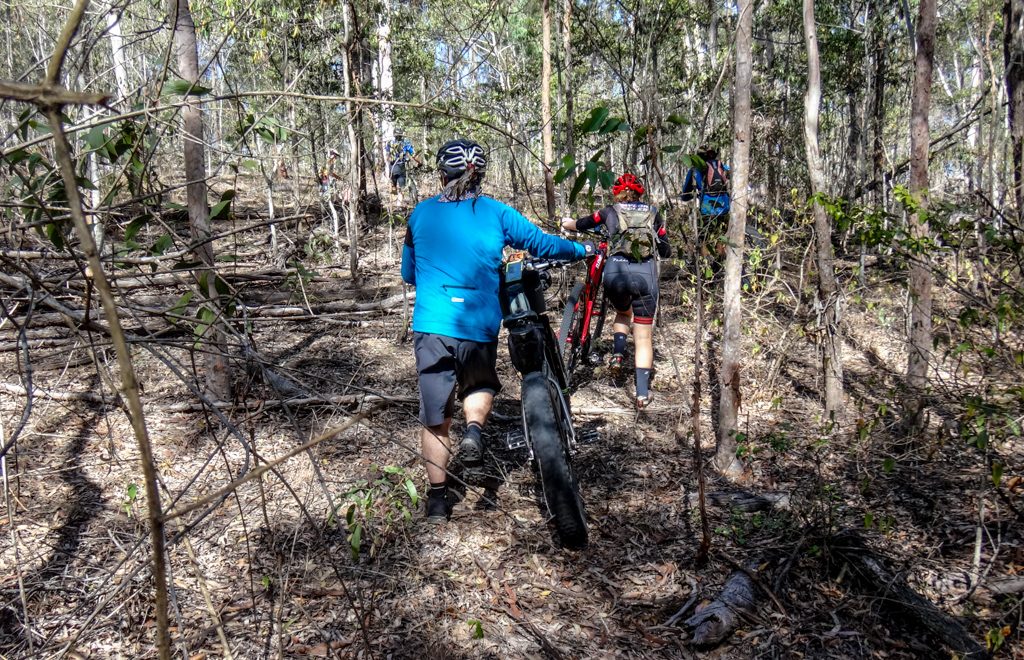 At the top of the hill we lost the track and bashed through the scrub for a while.

Darb suggested we should persevere for a few more minutes just in case we were able to find another track.  If that happened we wouldn’t have to double back. 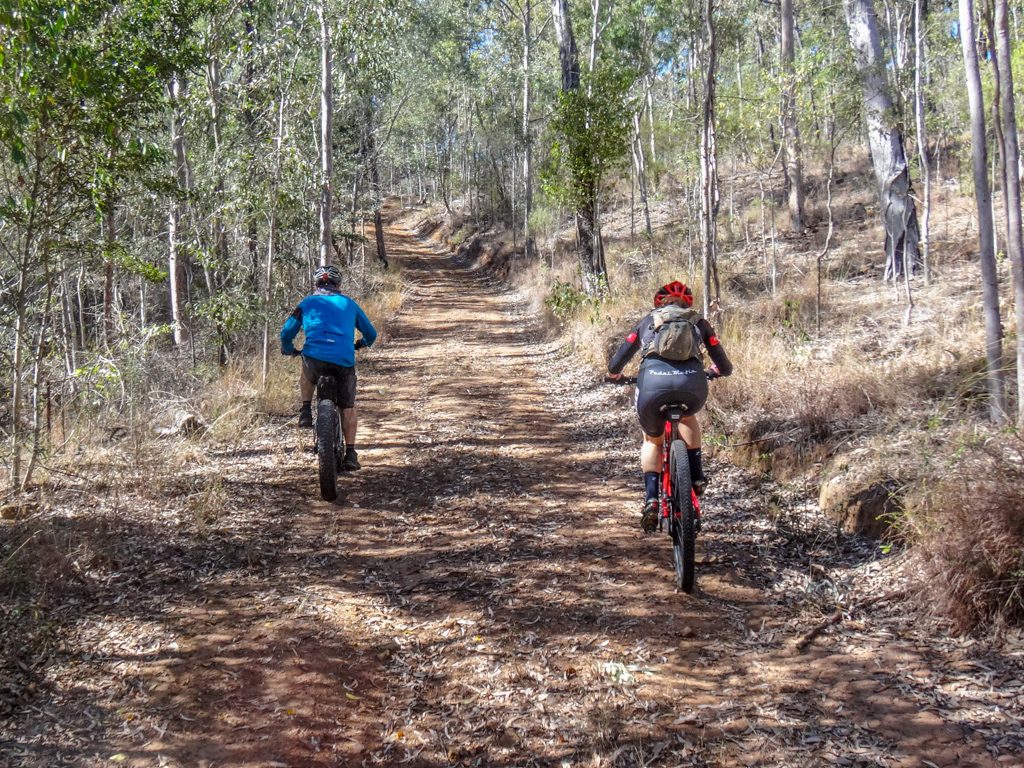 He was right (as he often is).  We found ourselves on one of the boundary tracks of the conservation estate.

My friend, Mark Roberts, tells me that “Boundary” Track is a euphemism for “Crazily Steep Push-Your-Bike” Track.

This was proof that what he said was true.  It was very steep. 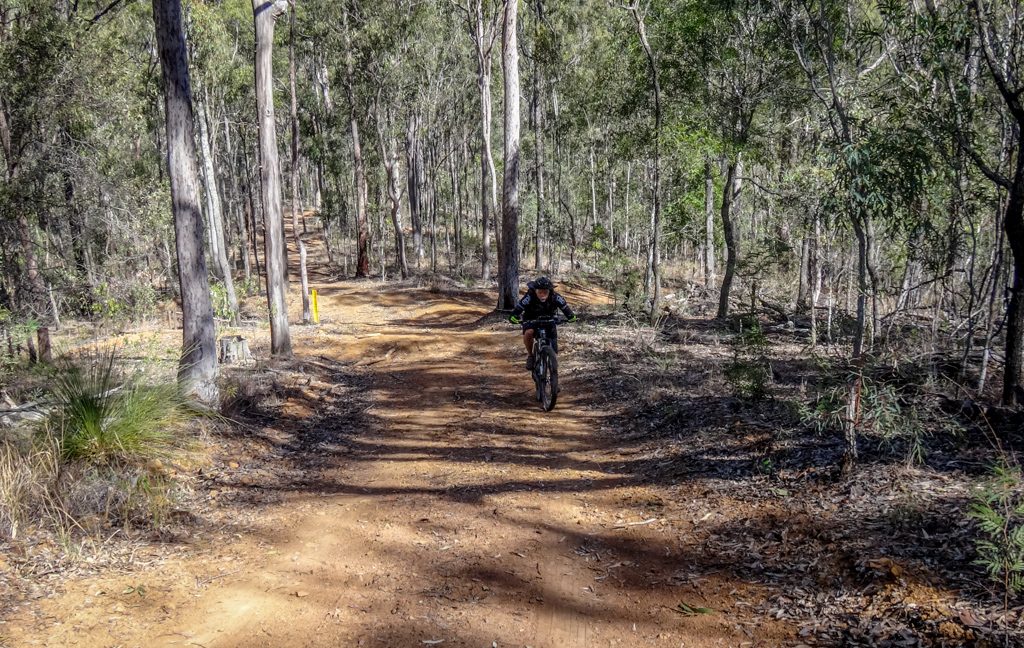 Jason demonstrated his strength and skill by riding up the last section, while the rest of us walked. 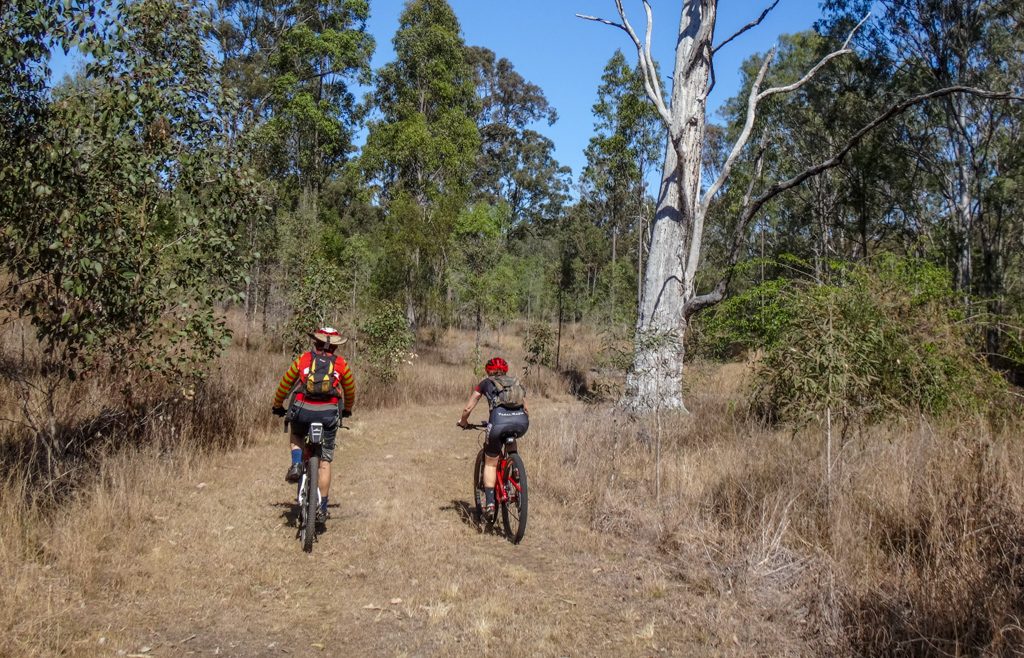 The boundary track rose and fell several times.  I was getting a bit tired.

At the bottom of another steep climb I said:

“If we go this way, we’ll have to climb another steep hill.  Or we can go this way instead – it’s reasonably flat. ”

I looked at Rebecca and said “Do you mind doing more steep bits?”

I should have anticipated her reply.  “Steep bits are fine by me”.

I rephrased the question.  “Do you mind doing some flat bits instead?”

Everyone humoured me – we took the flat road.

We followed the tracks south, around the back of the slightly shorter Mt Grandchester No. 2, back towards town.

All up we rode about forty kilometres in about five hours.

During that time we climbed about 1,450 metres in elevation, and I burned about 2,500 kcal.

I’ll rate this one 8.5 out of 10 on the tough-o-meter.  There was a lot of climbing, plus it was hard work pedaling for so long on soft grass.

Thanks Darb, Russel, Calum, Jason, Simon, Bruce and Rebecca for a fun day out.