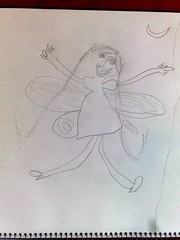 "Jhon and the Tooth Fairy" by Lilly

Once upon a time there lived a little boy named Jhon. Jhon really wanted his tooth to come out but it wasn’t going to come out. He tride and tride to pull it out but it still didn’t come out.

But one night when he was eting dinner he felt somethink wead (wierd) in his mouth, His tooth came out. He was so iksited. When he went to bed he put it under his pillow and the tooth fary came. She gave him two dollas.

The next day when he woak up he saw that his tooth was goan (gone).

He saw his two dollas. At school he spent it on tuckshop. He bort himself a slush puppy. It was dallishus.