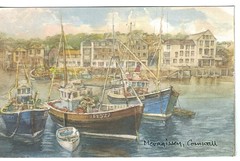 Like so many Cornish towns Mevagissey grew up around the pilchard fishing
industry and later converted to tourism. The eastward-facing harbour gave it an
advantage so that in its heyday millions of tons of pilchards were exported each
year. Mevagissey is still a working port but many of the fishermen’s cottages
have become gift shops or cafes.

A Postcrossing post card from Eleanor in Cornwall, England.

Eleanor loves living on the Cornish coast, “especially out of season when they are empty and full of atmosphere”.

Thanks for the lovely card, Eleanor!