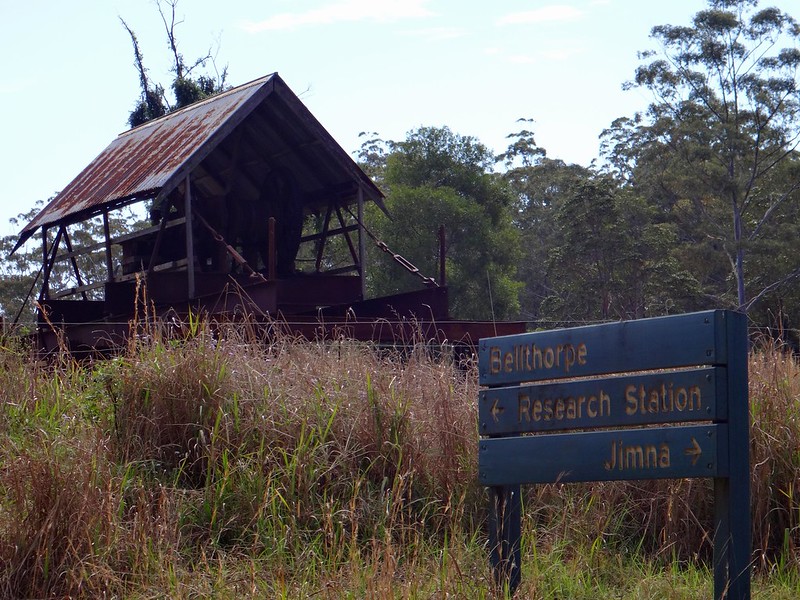 Today’s adventure had a couple of objectives. I wanted to close a gap in my map in Bellthorpe Forest. It was only about 2km in length, so I thought it would be achievable on foot, which would suit my current situation of not being able to ride a bike.

The other objective was to spend some time at Mount Mee an enjoy some of the amazing views. 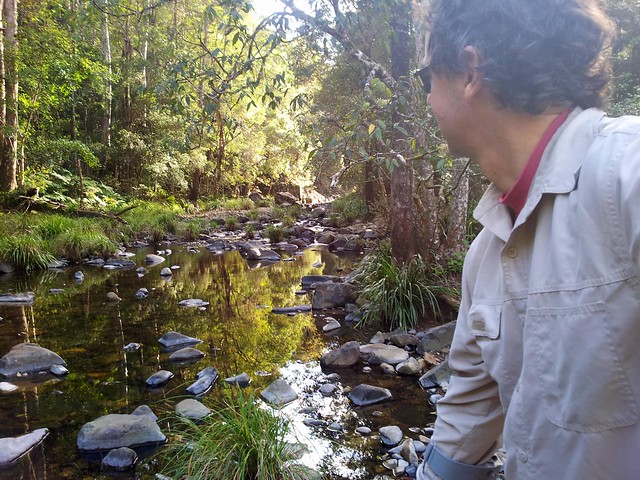 I started the day at the Stoney Creek day-use area at the bottom of the range in Bellthorpe National Park. Stoney Creek runs down the southern slopes of the Conondale Range before eventually flowing into the Stanley River. 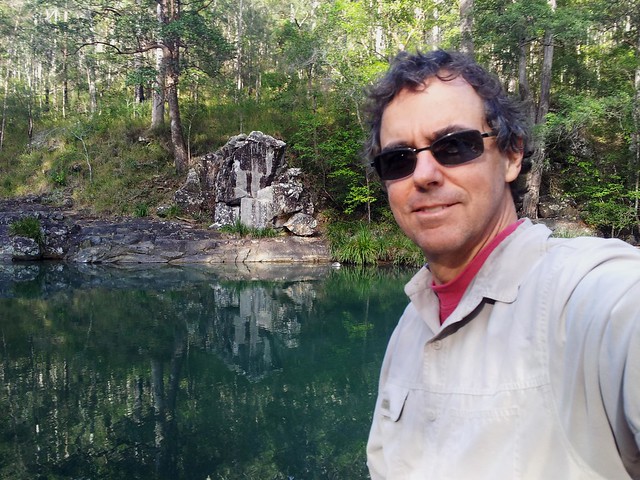 I thought this might be a great spot to re-visit in the heat of summer. The water in the rock pool here is bright blue. It looks like it would be a delicious place to cool off in the warmer months. 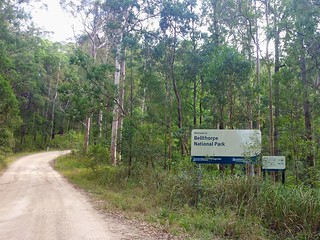 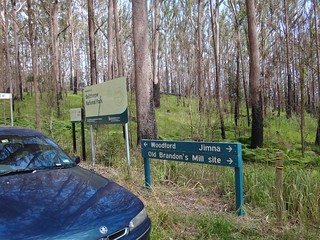 From Stoney Creek I slowly made my way up the mountain to Bellthorpe. The road is steep and twisty, so I took my time, enjoying the view. 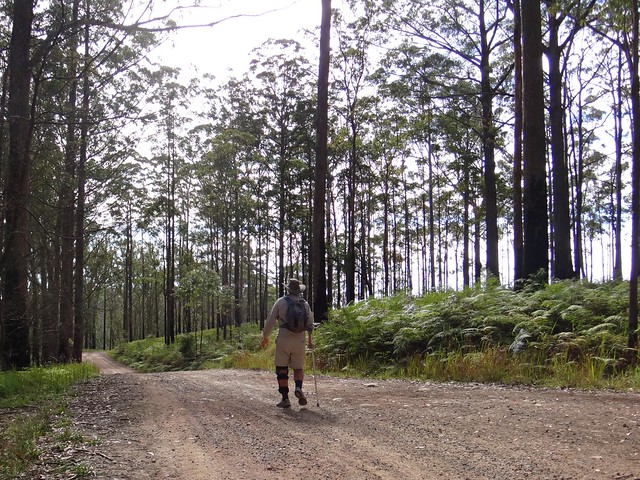 At this point I parked the car, and set off on my short hobble/hike to the sawmill. 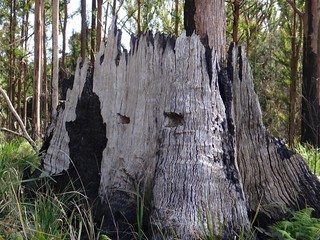 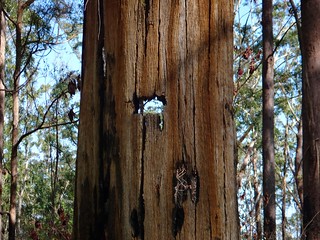 There’s plenty of evidence of logging from bygone days in this forest – you just need to know where to look. When trees were cut by hand, loggers would cut a square recess in a tree’s trunk which would then hold a wooden plank. They’d stand on the plank and either chop the tree, or cut another recess for yet another plank. You can still see the square holes in old tree stumps where the recess was cut by the logger. 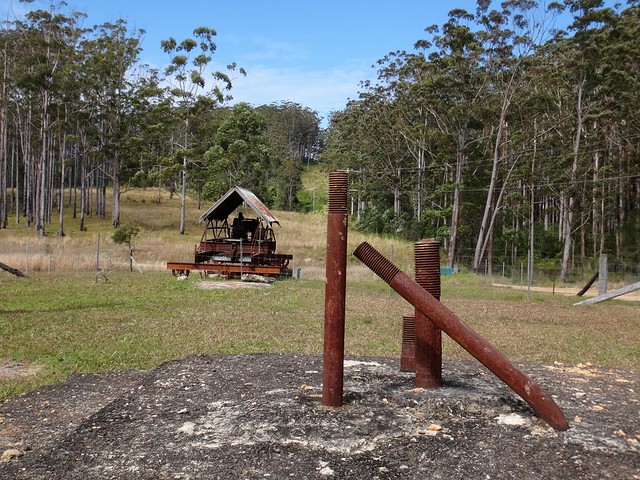 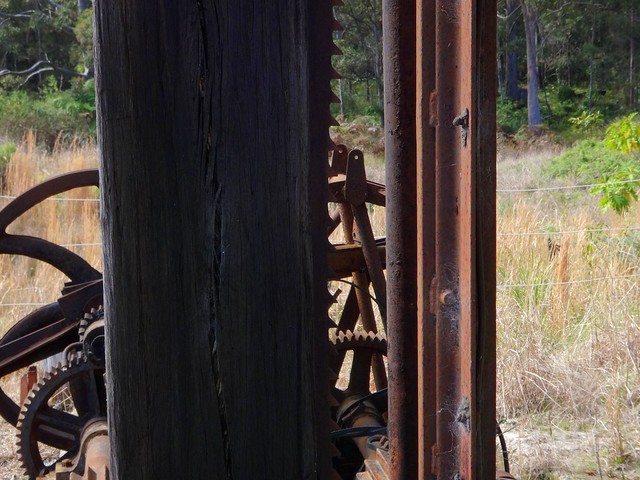 The ruins of the sawmill show evidence of an old Gantry, crane, band saw and building foundations. They’re slowly being reclaimed by nature in its slow-motion revenge over the rusting machinery. The mill is a reminder that, like many other national parks and state forests, this place was once heavily logged. 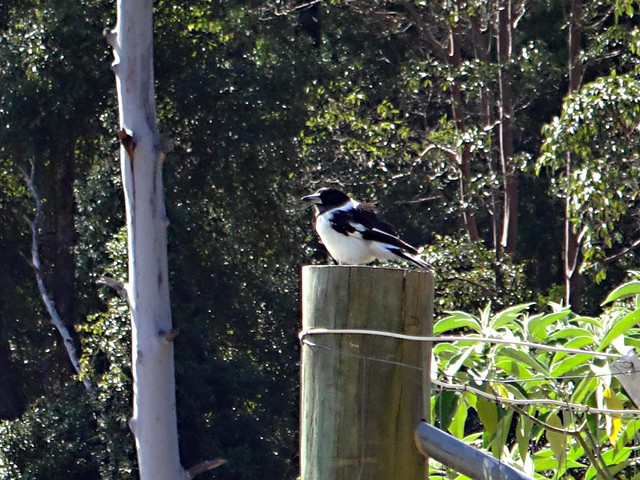 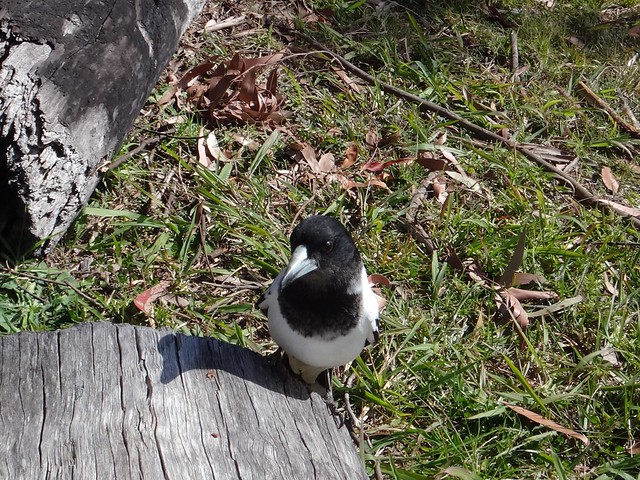 As I sat on an old log, munching on my chocolate bar, a butcher bird found me, and sat down next to me – less than half a metre from me. I could have reached out and touched him if I wanted. He just looked at me as I ate, and made a pathetic chicken-like sound that was unmistakable. He wanted what I had… 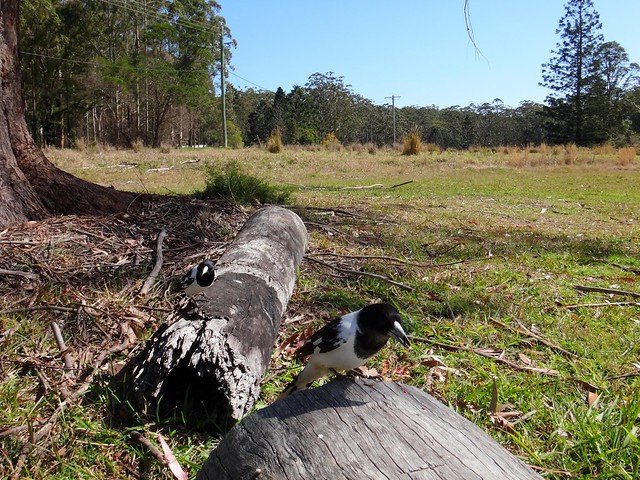 …so I obliged. He was very grateful as his mate looked on enviously from a safe distance on an adjacent log. I didn’t know butcher birds like chocolate. I think perhaps they like whatever it is anyone else is eating – regardless of what they’re eating. 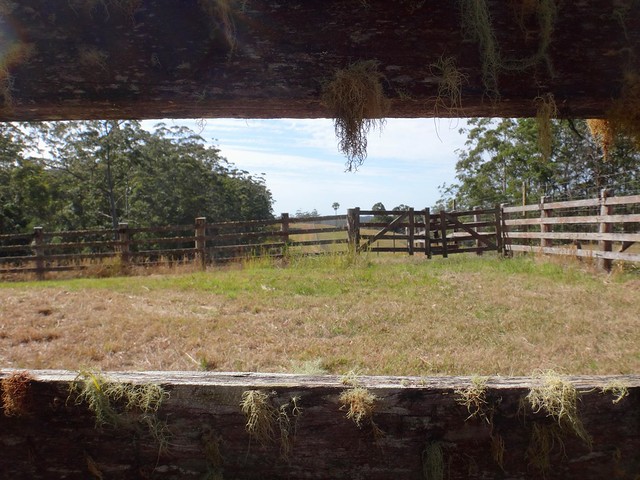 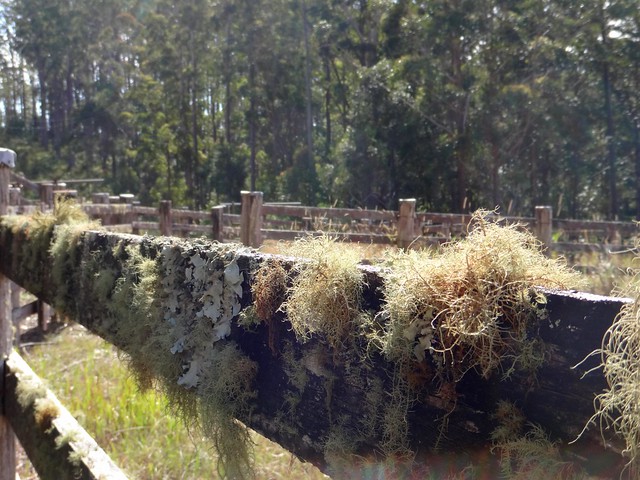 Nature seems to be taking over other things too. The lichen is growing very happily on the palings of this this cattle yard fence. 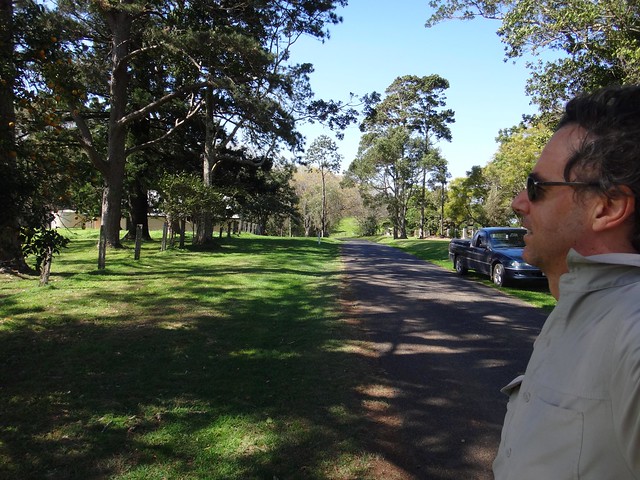 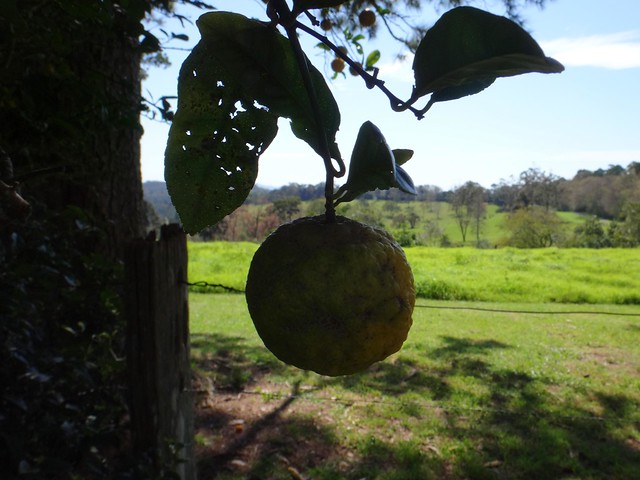 After I arrived back at the car, I slowly drove eastwards along the top of the range, over “Livingstone Hill” and through the small community of Bellthorpe. In the city below, the temperatures were quite balmy. But up here in the mountains, the breeze still had a pleasant chill to it. I parked a the car by the road and grabbed a few wild lemons growing by the side of the road. I’m not totally convinced Liz likes me bringing this sort of thing home as a “gift”, but it does my ego good to think that in some way I’m still playing the role of a primitive hunter gatherer. 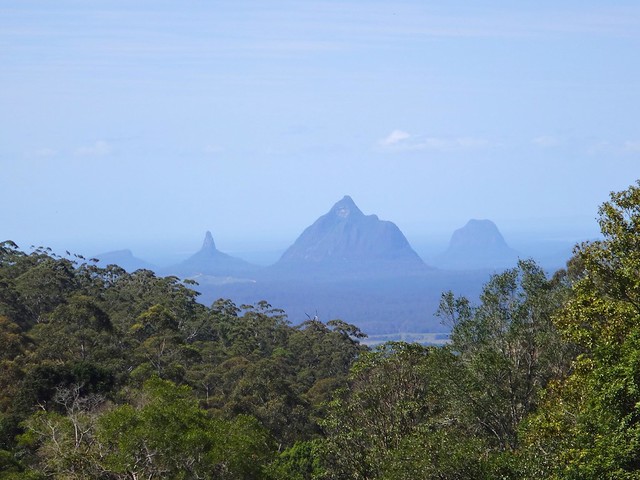 Bellthorpe Range Road offers some amazing views of the Glasshouse Mountains as it slowly winds back down the mountain. 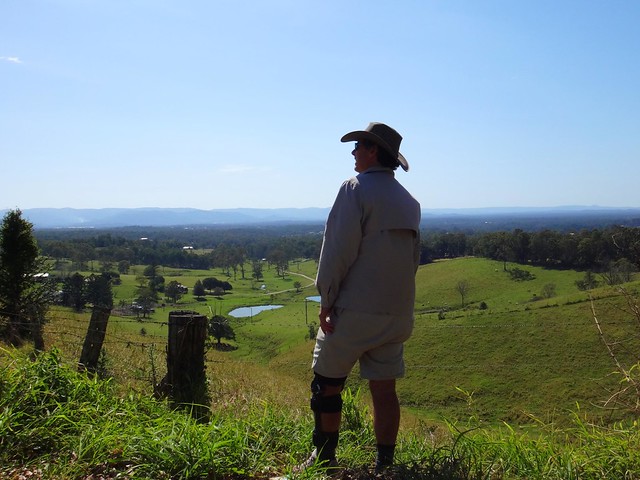 After a quick lunch in Woodford I made my way up to Mount Mee via Delaney’s Creek. On the way up, I stopped and had a bit of a look towards the north, and could make out the Conondale Range in the distance. It’s always fun to look back and get an idea of where you’ve been. 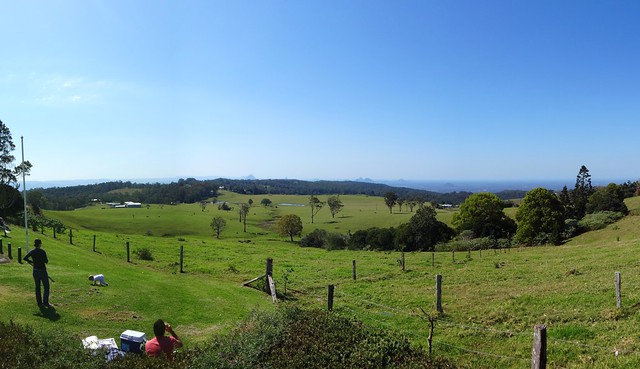 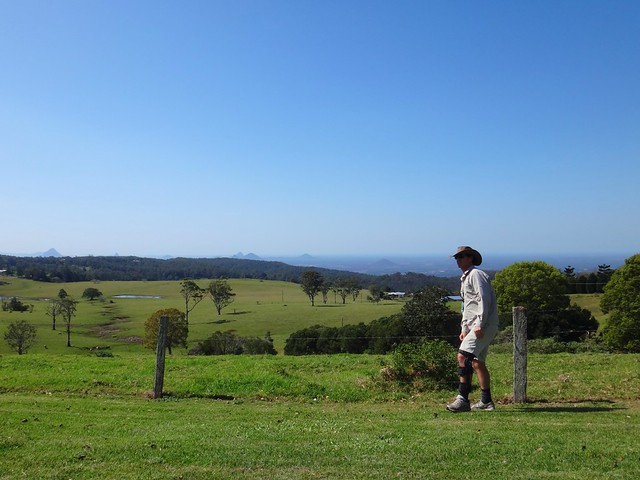 I made a quick stop at the Mount Mee lookout to soak in the views. Lots of other people had the same idea. What a glorious day – the views went on forever. 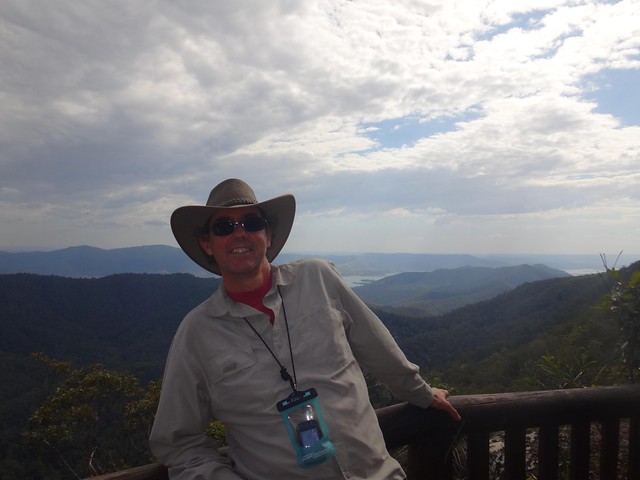 Eventually I made my way to Somerset Lookout near the Gantry at Mount Mee. Like Bellthorpe, Mount Mee also has a history of logging, as is evidenced by the huge gantry at the day use area. As I enjoyed the vista before me, I thought the last thing you’d want to do is log it. 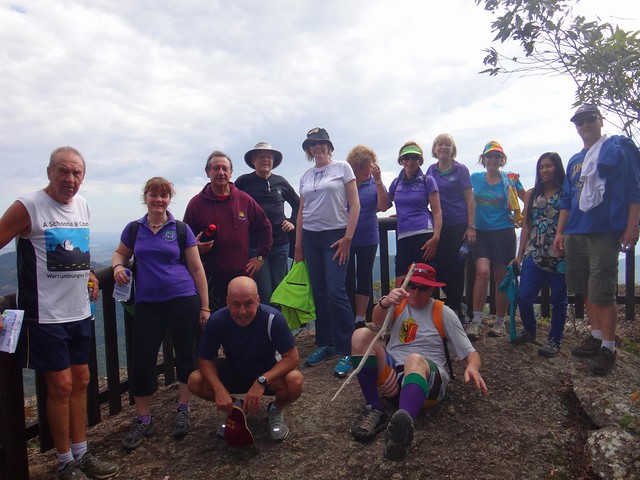 I was fortunate to meet up with some happy hikers from the Hash House Harriers – a social group of runners. They describe themselves as drinkers with a running problem. I was delighted to meet up with such a cheerful group of people. Most people you meet in the bush are happy. I’m not sure if this means the bush makes you happy, or that it’s only happy people who decide they’d like to go hiking in the bush. 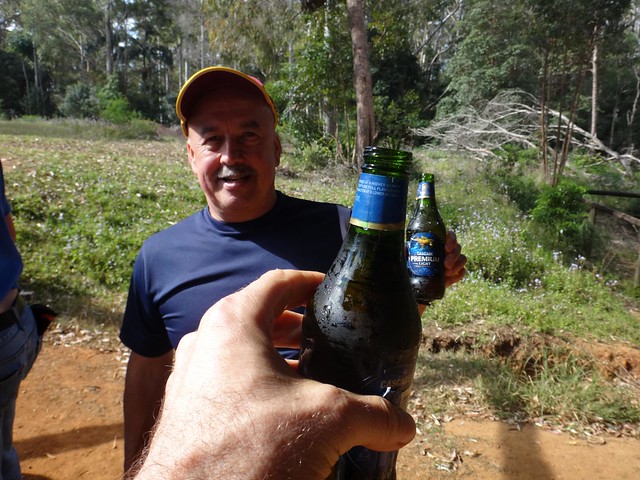 One of the hikers, “Beach Ball” (Harriers call each other by nick names rather than given names), decided he’d rather hitch a lift with me back to the gantry, instead of walking back. I was grateful for the company. He was grateful for the lift and gave me a beer when we got back. Cheers, Beach Ball!

The walk to Brandon’s mill was only 2.3km but it took me 1 hour 18 minutes including stops for photos. If you were doing this ride on a mountain bike, I’d suggest starting at either Woodford, or the Stoney Creek Day use area. You might get an idea for a route from this ride I did a couple of years back – but be prepared for a long climb up Stoney Creek Road. If you do this ride, I suggest you take the short detour to Brandon’s mill before going down Bellthorpe West Road. It would only add 10 or 15 minutes to your ride, but it’s a fascinating place.

The drive was just over 200km with some great lookouts. If you were lookiing for some places to take the family for a Sunday drive, some of these spots would be ideal.