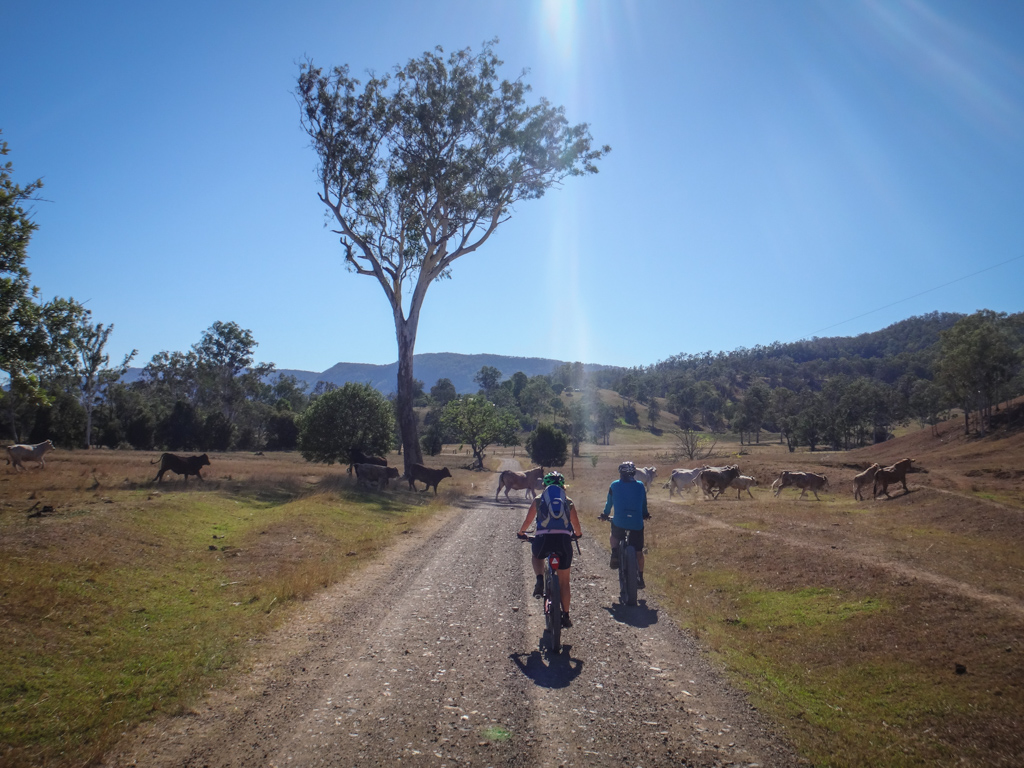 Reedy Creek is a delightful hidden valley tucked into a secret corner of the D’Aguilar Range.  We’ve ridden near it many times, but never even suspected it was there. 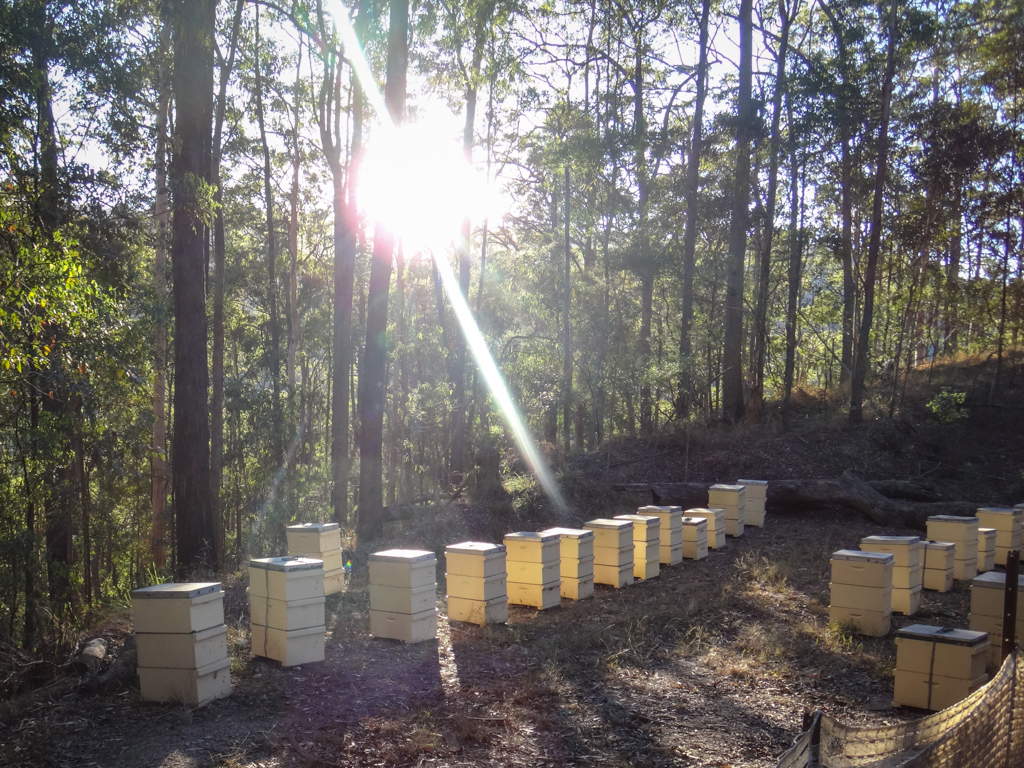 As the sun slowly peaked above the surrounding hills, we started today’s adventure at Mount Brisbane, a short drive out of Dayboro. 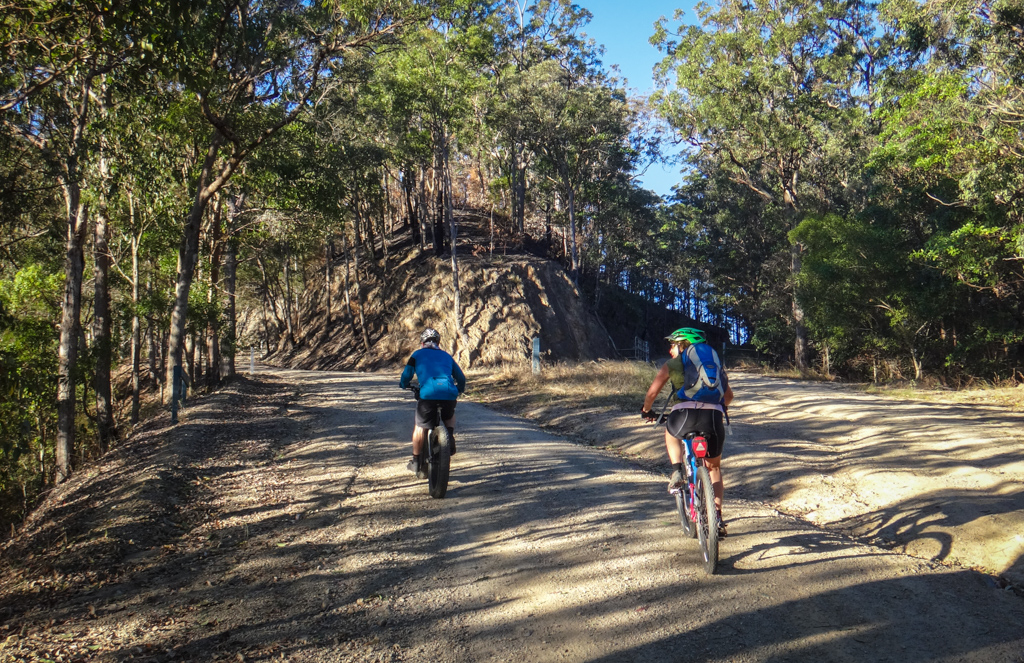 Unfortunately for us, when you start a ride at the base of a mountain range, there’s nowhere to go but up.

With no chance to warm up, or ease into it, we started our big climb up Chambers Road. 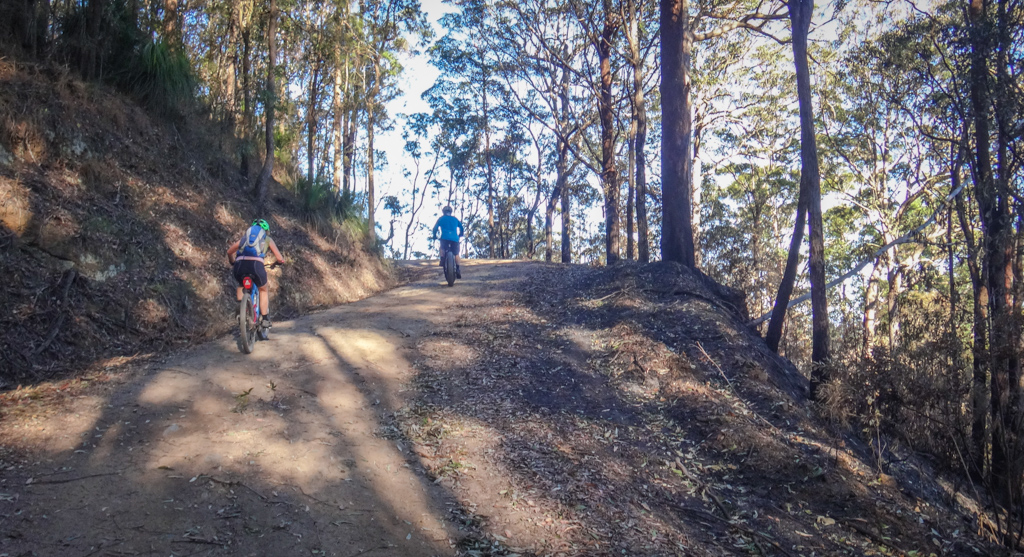 From there we turned left, and kept climbing up Forest Range Drive. 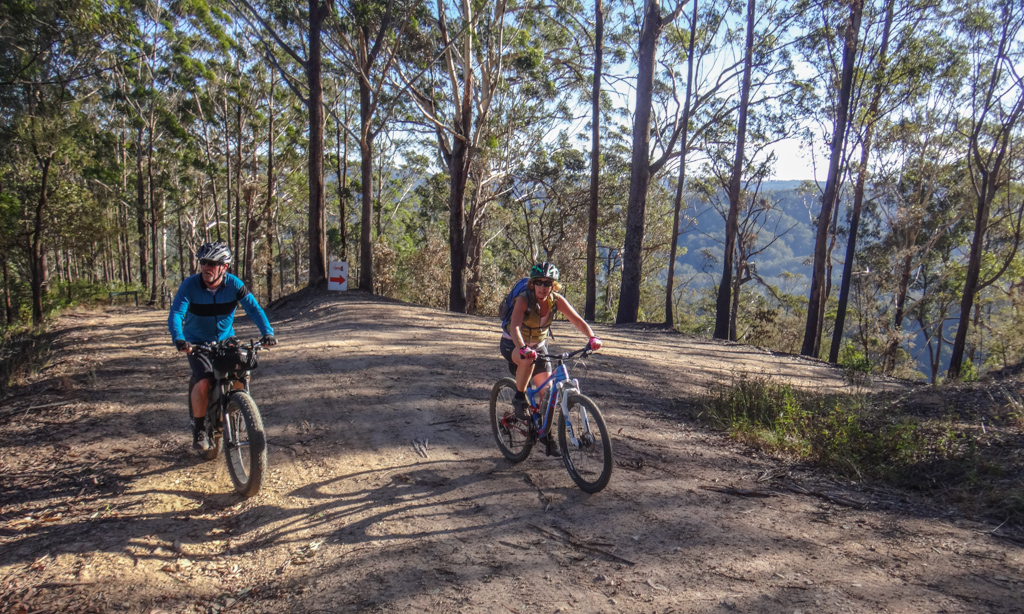 It seemed like there was no respite.  Apart from a couple of short interludes we ascended continuously for almost fifteen kilometres, and over two hours. 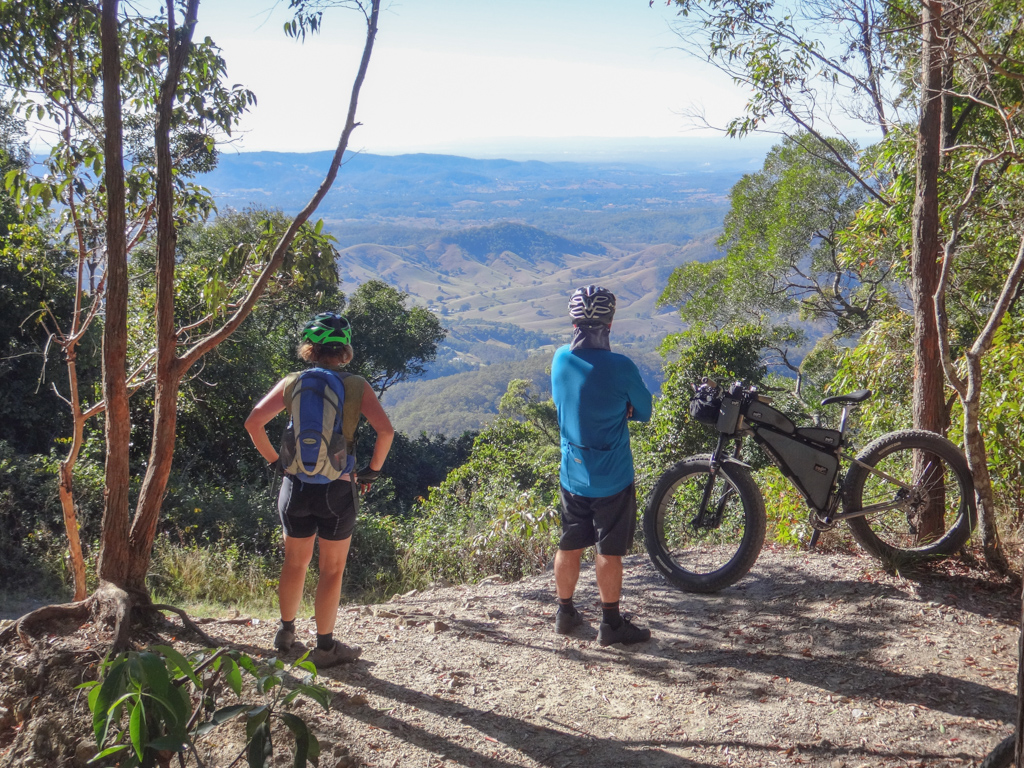 After just over 900 metres of vertical ascent we reached Kluvers lookout.

Normally we come to this panoramic viewpoint via a relatively easy climb up Wirth Road, but today we had come the hard way – along the top of the D’Aguilar Range.

We earned the great views, and took plenty of time to catch our breath.

In the distance, sun reflected of the sand hills of Moreton Island on the other side of the bay.  The landscape spread out before us: a tapestry of green and orange. 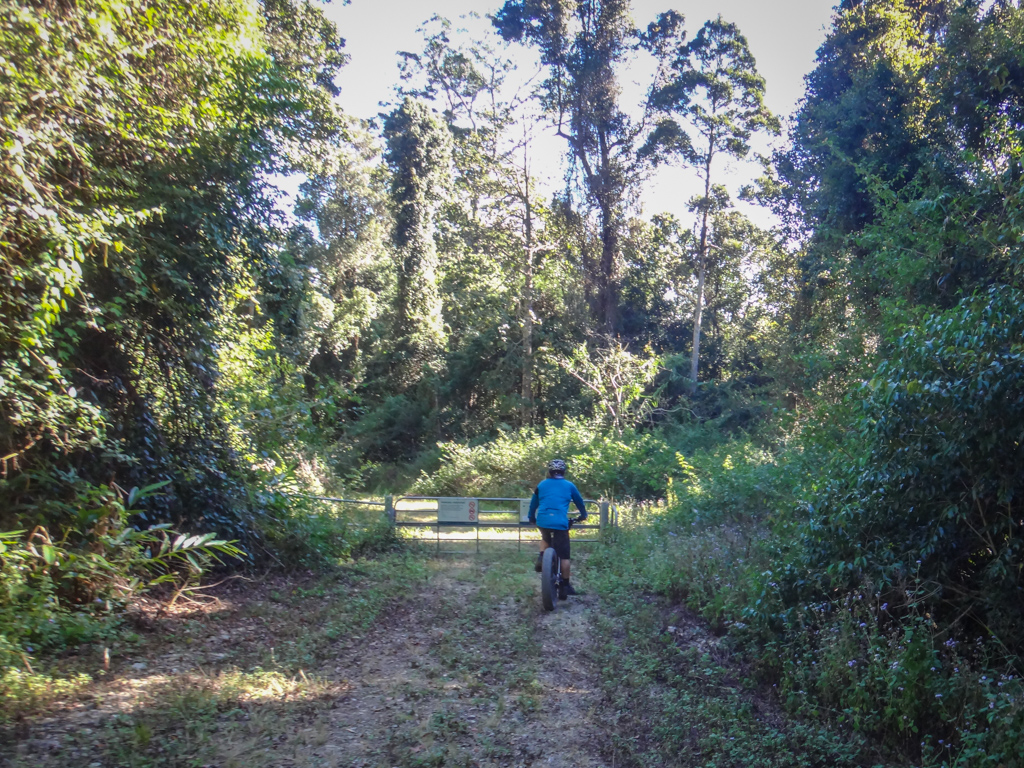 The main reason for today’s climb was a curious looking trail behind the lookout which led down the other side of the mountain.

I had passed it several times and often wondered where it led.

Today I indulged my curiosity, and had a look. 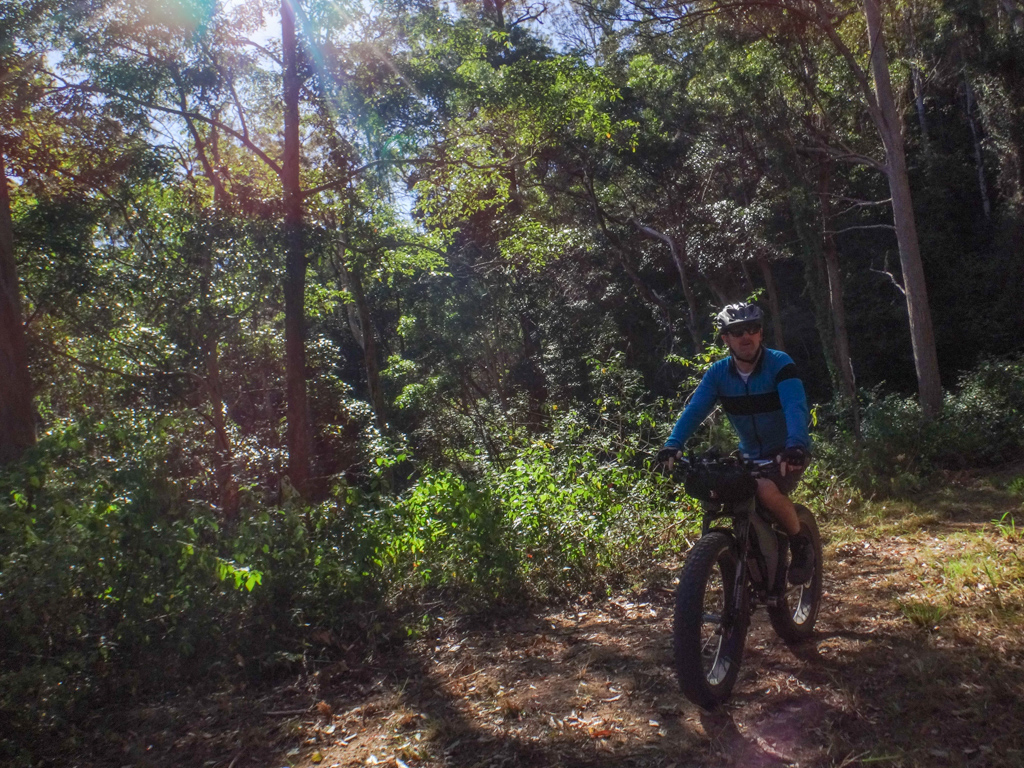 It looks like the surface has been graded in the last few weeks.  It’s perfect.

We took our time and rolled downwards for a long time.

As we neared the bottom, we caught glimpses of the hidden valley.  Squeezed between two ranges of steep hills, it would be easy to miss unless you were looking for it. 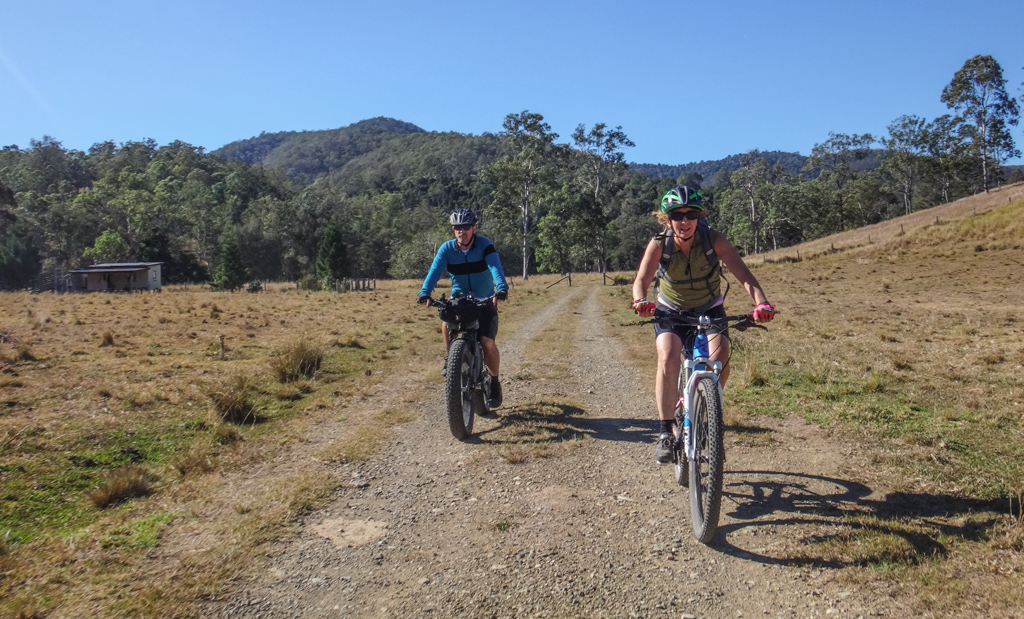 The valley is formed by Reedy Creek, one of the tributaries of the Stanley River, joining it just before it meets the Brisbane River at the northern end of Lake Wivenhoe.

At present, the creek bed is dry this far upstream. 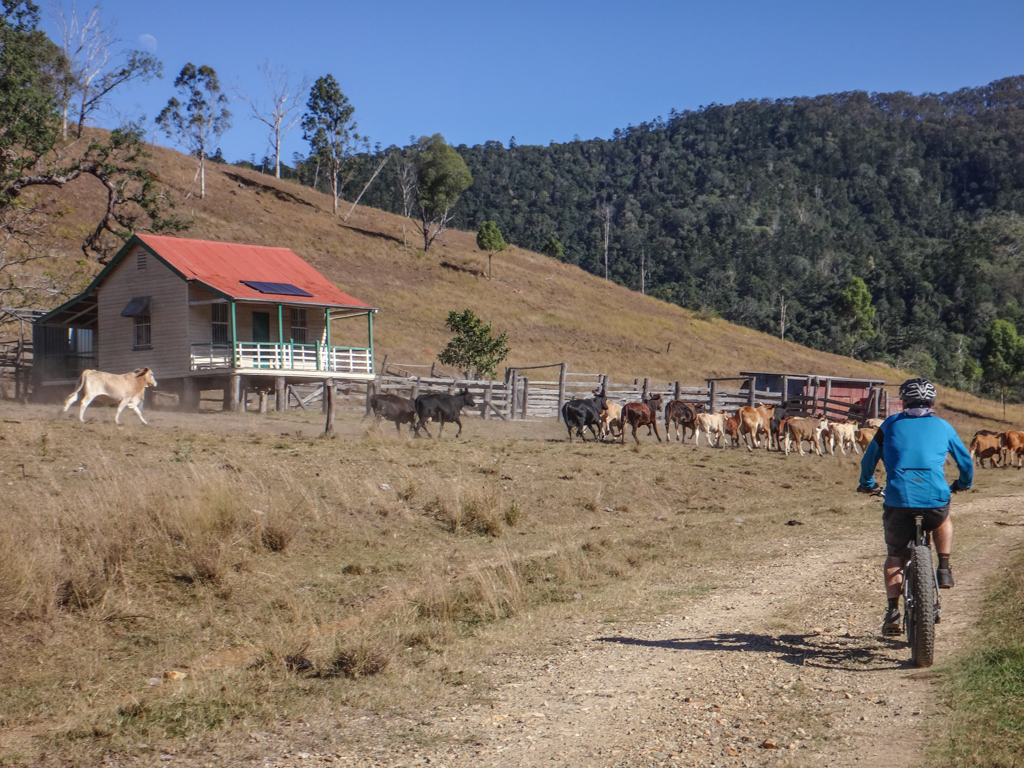 But despite the dry creek, the valley is full of contented cattle.   Every paddock we passed was replete with blissful grazing bovines. 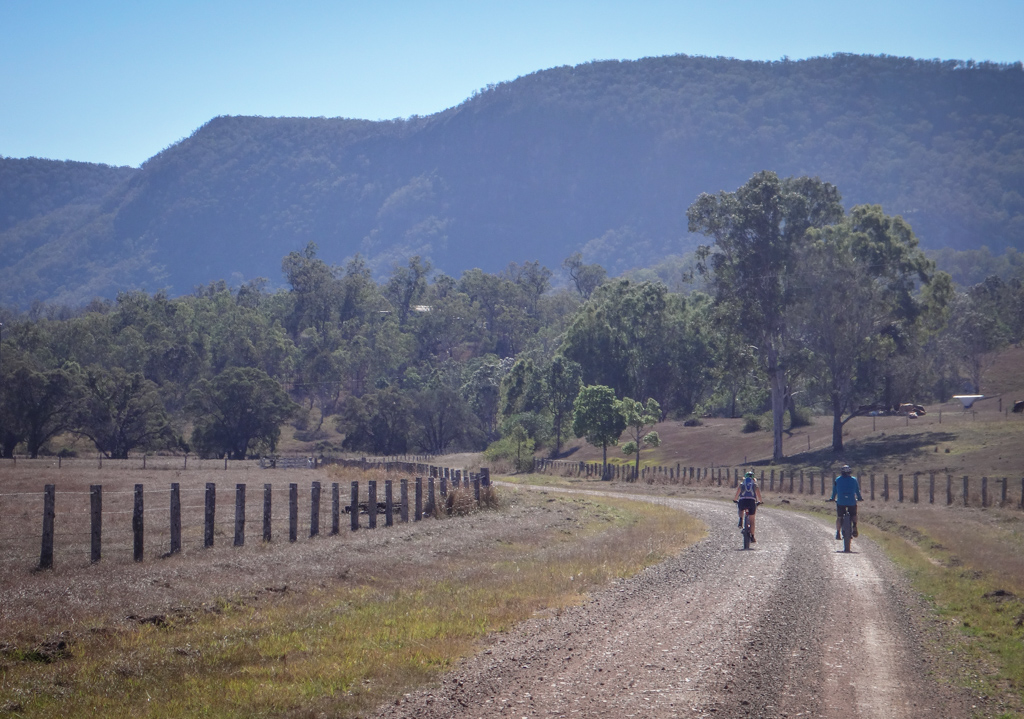 Mount Byron lay ahead of us at the end of the valley.

We followed Reedy Creek out, rolling down a gentle descent as we went.

By the time we reached the end of the valley we had been going downhill for fifteen kilometres.

This was a pleasant way to recover after such a strenuous start to the day. 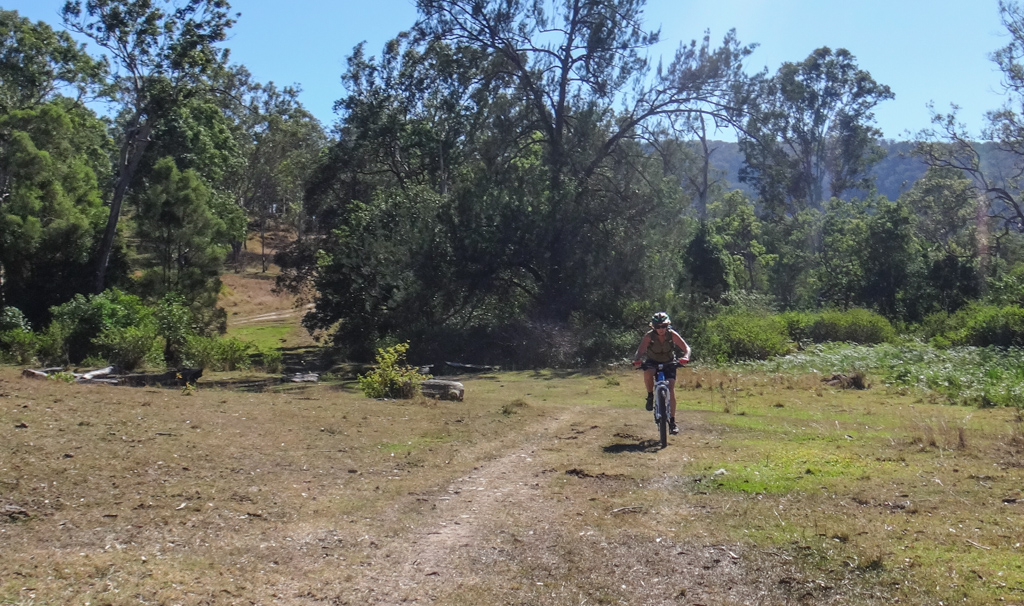 At the end of the valley we turned eastwards into Stirlings Road, and followed Byron Creek back into the National Park through “Byronvale”, a privately owned farm. 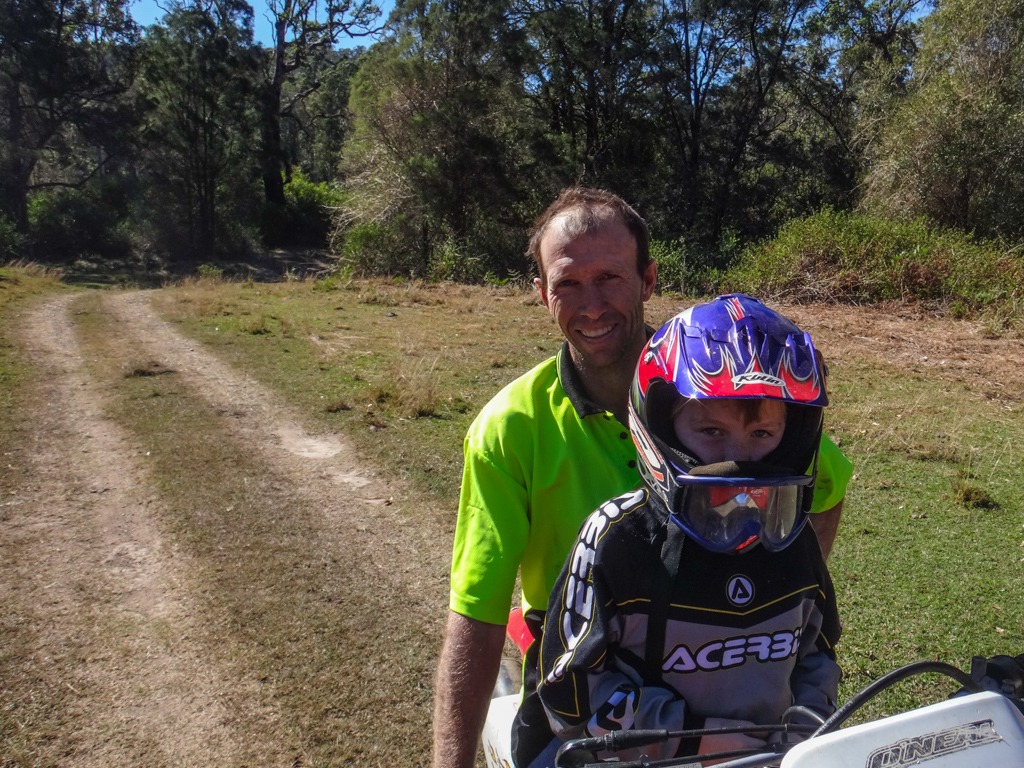 On the way we met the local farmer and his son.

“Ha that’s funny.  You’ve got the same name as the mountain and the creek we’re riding beside.

“Yes,” Byron replied, “my parents named me after the mountain.”

My mind raced.  “So you’ve been here all your life?”

“Yes. Our family has been here a long time.”

“What’s your surname?” I blurted out, not being able to contain my curiosity.

We were riding along Stirlings Road, next to Mount Byron, and we were speaking with a man named Byron Stirling who had lived here his whole life.

If we were in Scotland, this man would be the Monarch of the Glen.

I explained to Byron that I thought the road we were riding was probably the easiest way to cross the D’Aguilar Range.  He agreed.  From where we were standing it was a 7km ride to the crossing point of the range, and we would only have to ascend 250 metres.  I’ve crossed the range many times, via Mount Nebo, Mount Glorious, Kluvers Lookout and Mount Archer, but this is the most gentle pass through the range by far.

This is why I think both Henry Somerset (in 1872) and Billy Mateer (in 1893) used this route when they needed to cross the range. 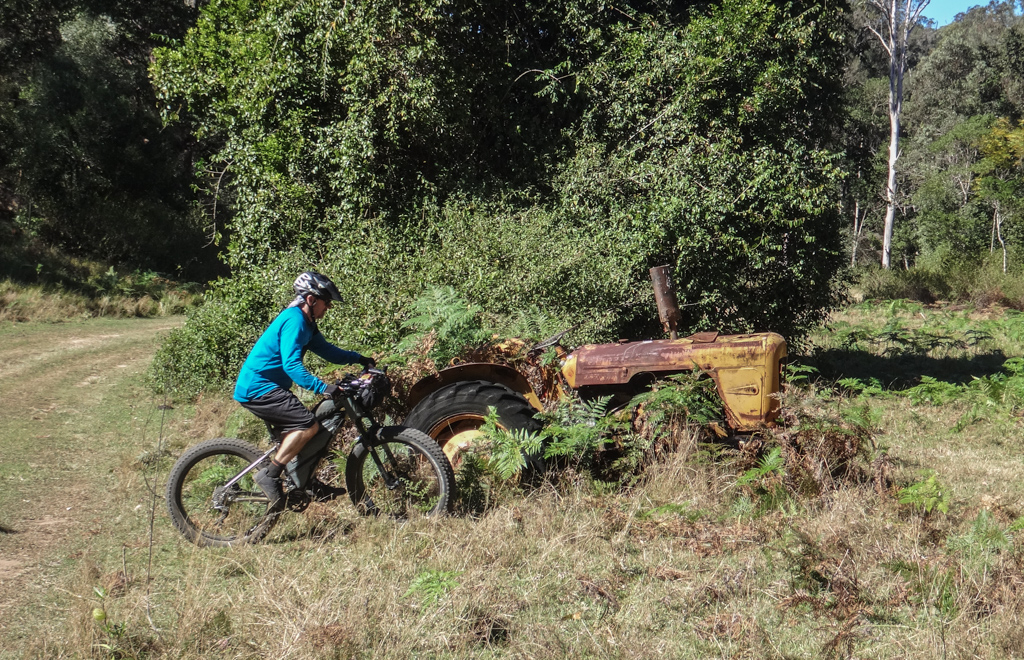 We left Byron and rode through his property, “Byronvale”, along bumpy roads, past an old tractor. 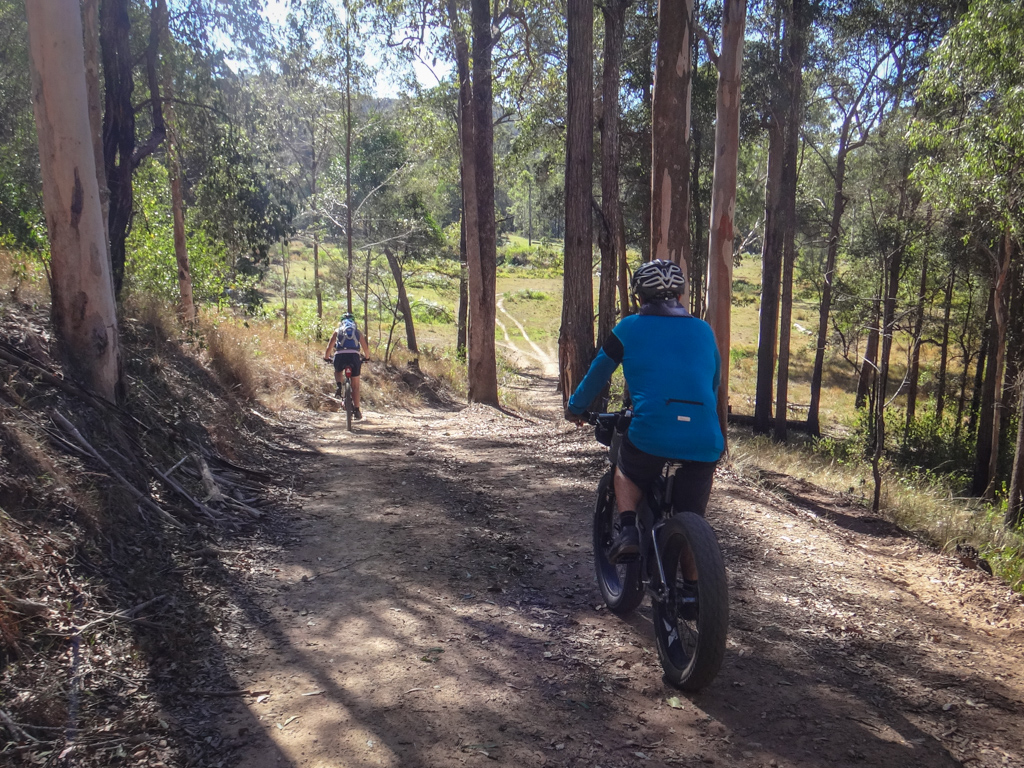 This is beautiful country.  If I was Byron, I wouldn’t want to leave either. 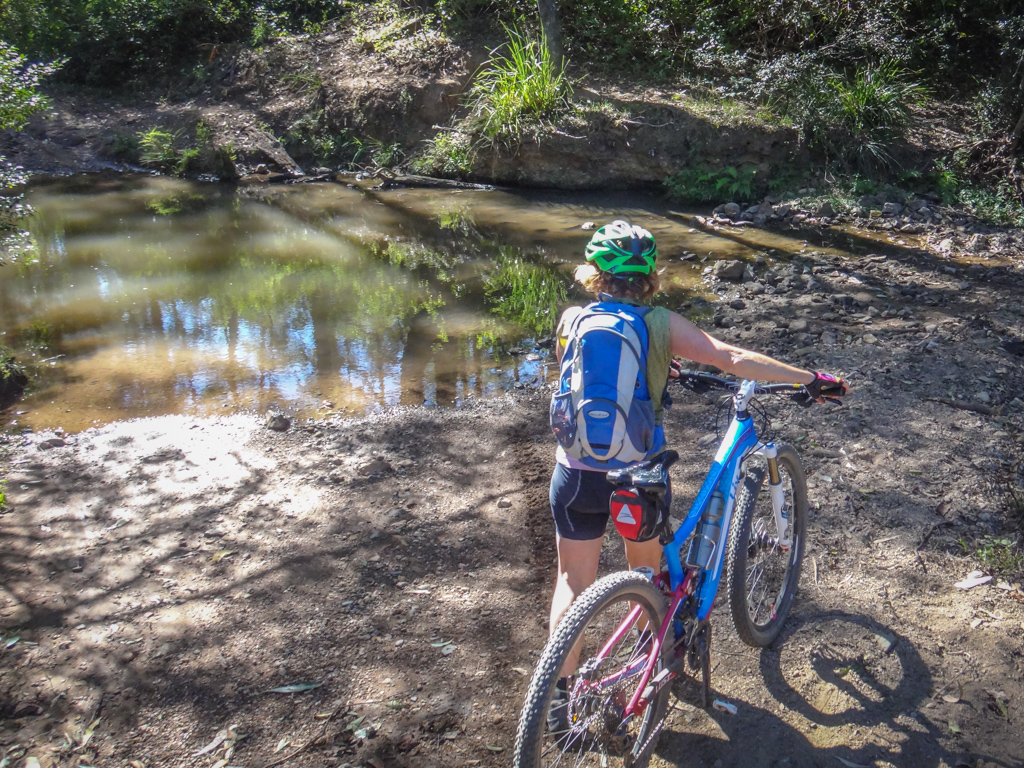 At our only flooded crossing of the day we decided to keep our feet dry and tiptoed along a cattle track around the water. 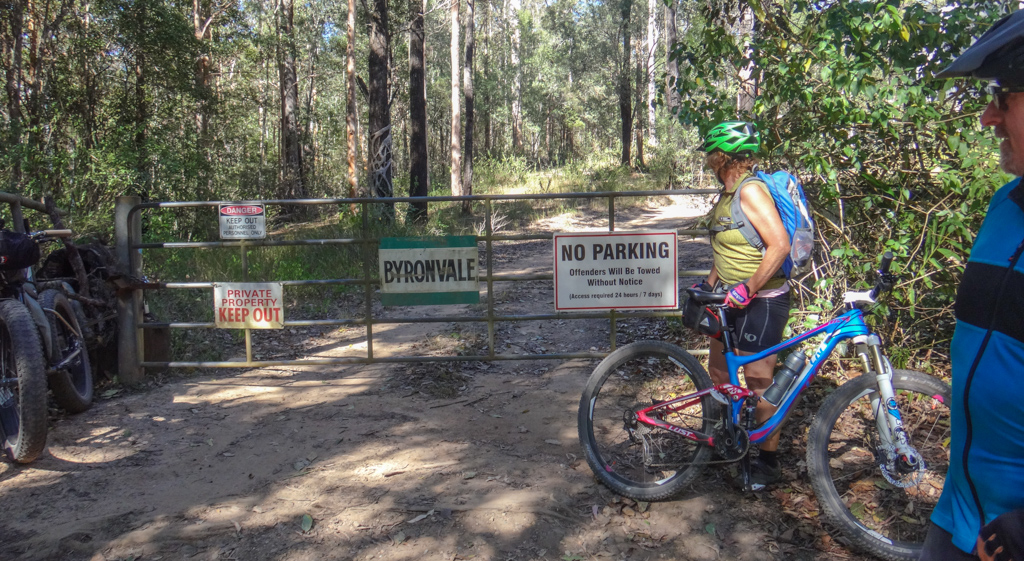 Eventually we reached the boundary between the National Park and Byronvale. 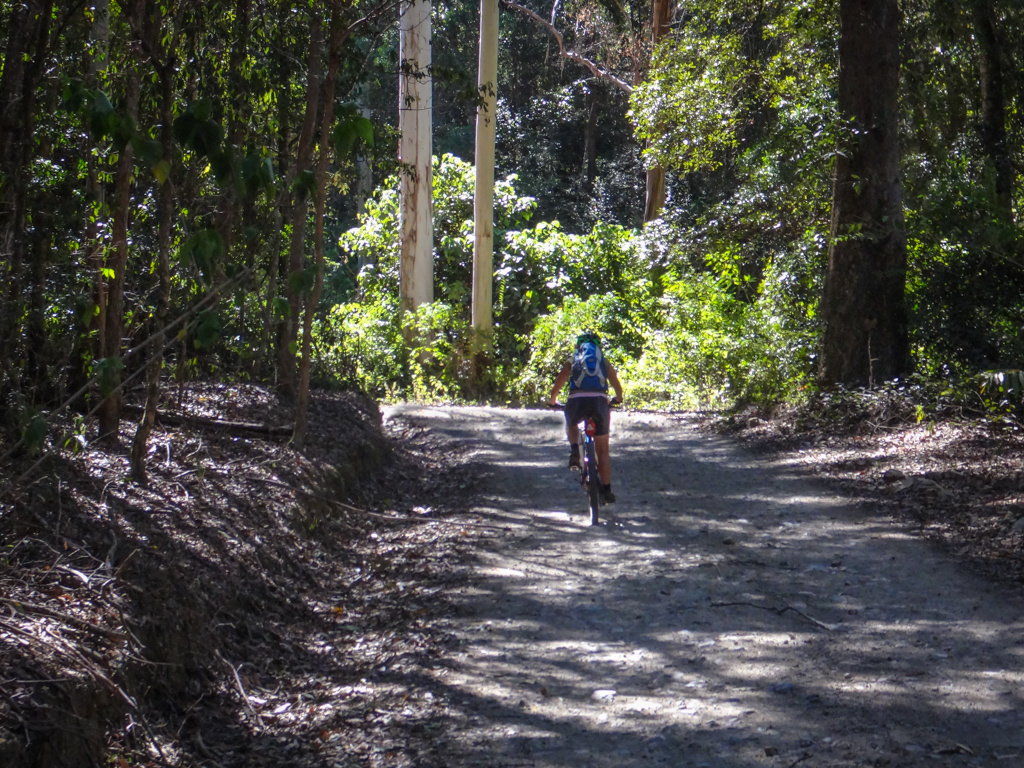 Byron Creek Road follows the creek of the same name through verdant rainforest up a slow climb towards the top of the range. 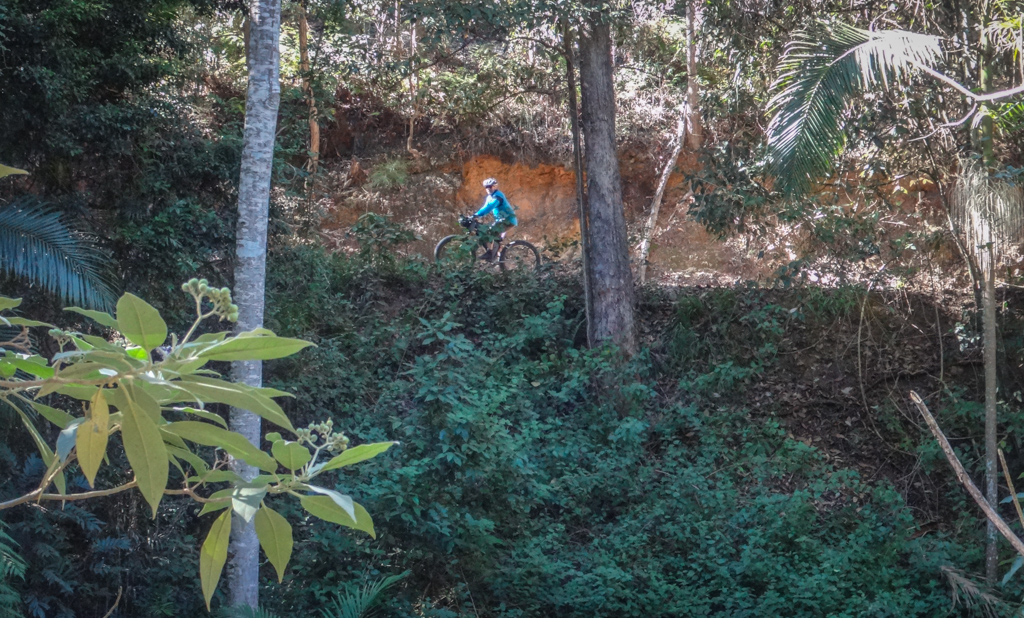 We climbed the gentle gradient at our own pace.  As the road hooked around, I caught a glimpse through the tress of Darb pedalling up the hill in front of me. 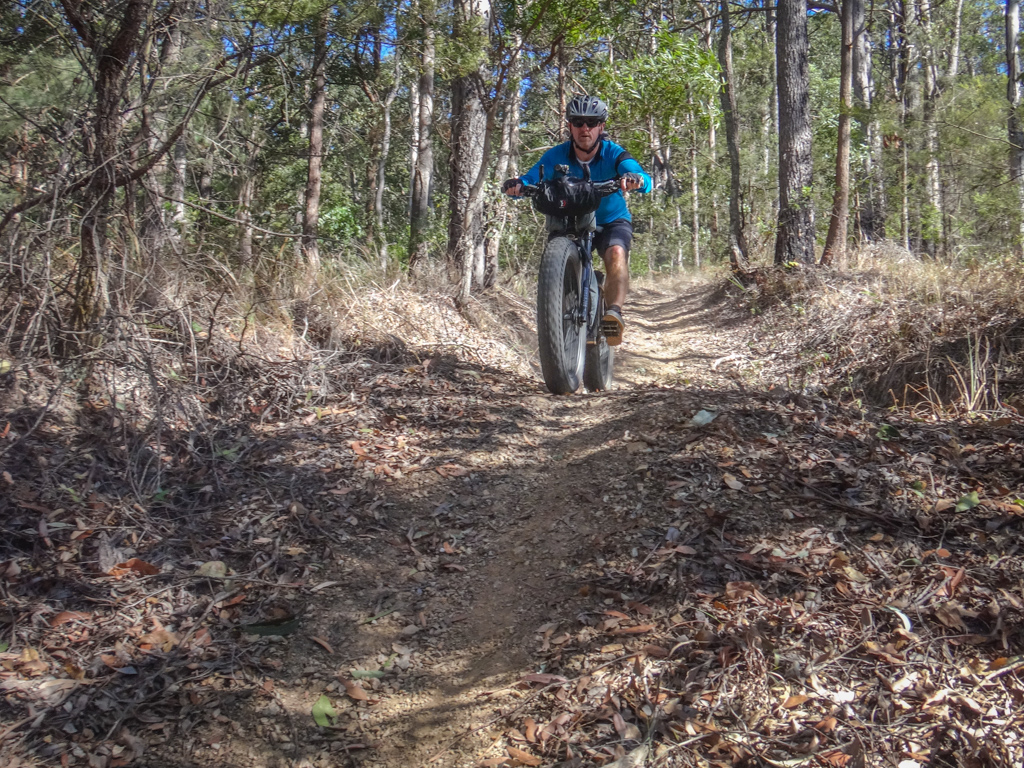 At the top we followed a steep horse trail down the other side.

I skidded down the loose gravel.  Darb’s fat tyres gripped the ground flawlessly. 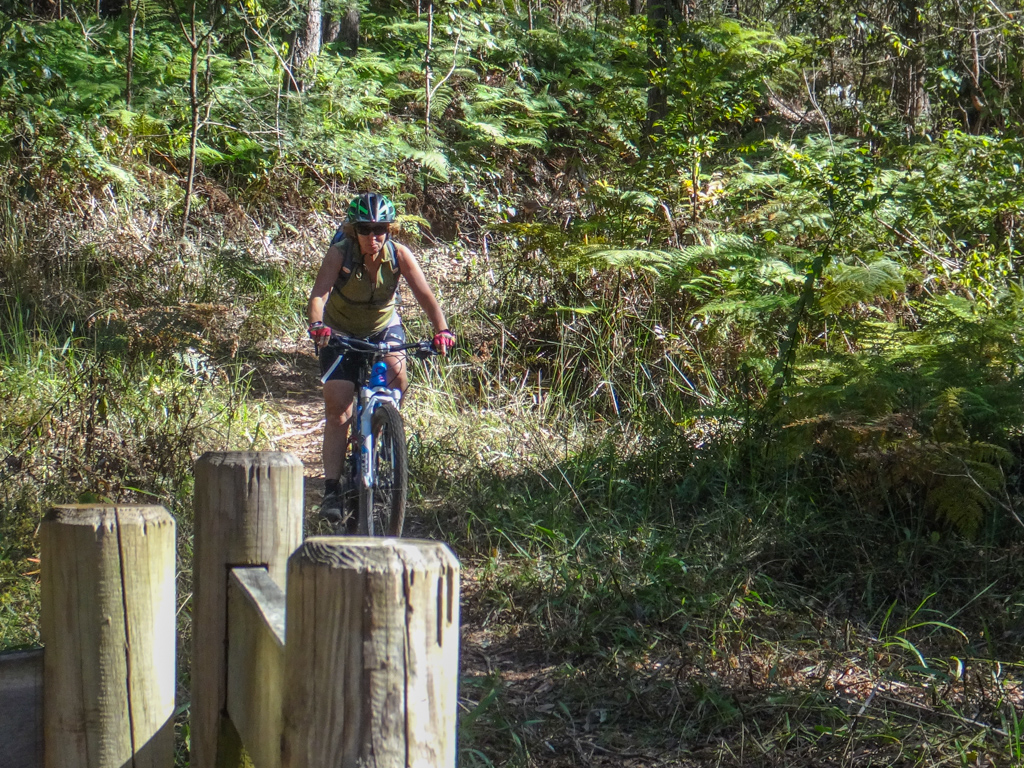 Kaye followed us down at a slower pace.

I was relieved we had all reached the bottom without any mishaps.

Here’s Darb’s video of the ride.

We rode almost 43km in five and a half hours.  During that time we climbed about 1,500 metres in vertical ascent, and I burned just over 2,000 kcal.

This is a spectacular ride with some great views.  But it’s tough.  Don’t try it unless you’re able to climb up a steep hill for over two hours.

And please don’t ride across Byronvale without first asking permission.

I’d like to organize a group ride along this route in the next few months, so if you’re interested, subscribe to the updates, and watch this space!

Thanks Kaye and Darb for indulging my curiosity, and for your company on this wonderful ride. 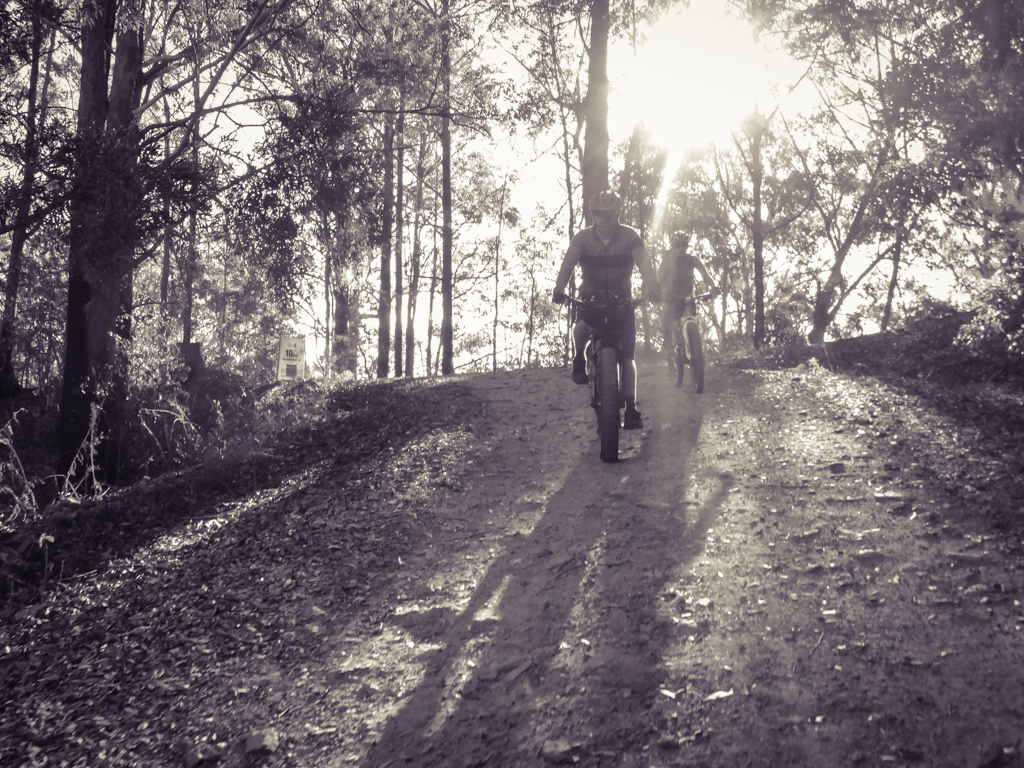