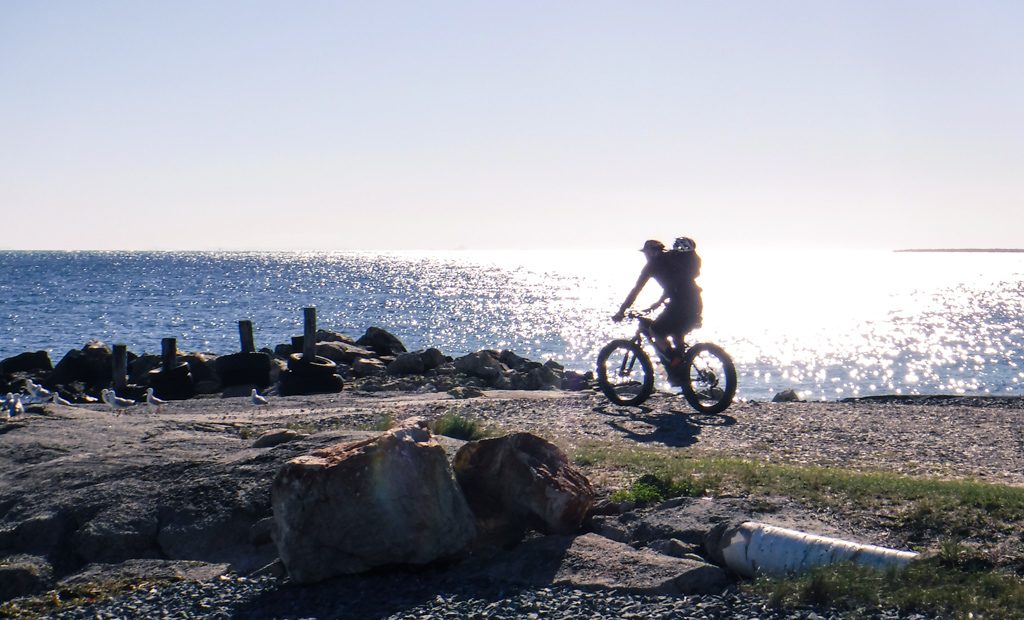 My riding buddies have been exploring North Stradbroke Island while I’ve been away.  Today I relaxed and let Jason guide us around this island paradise. 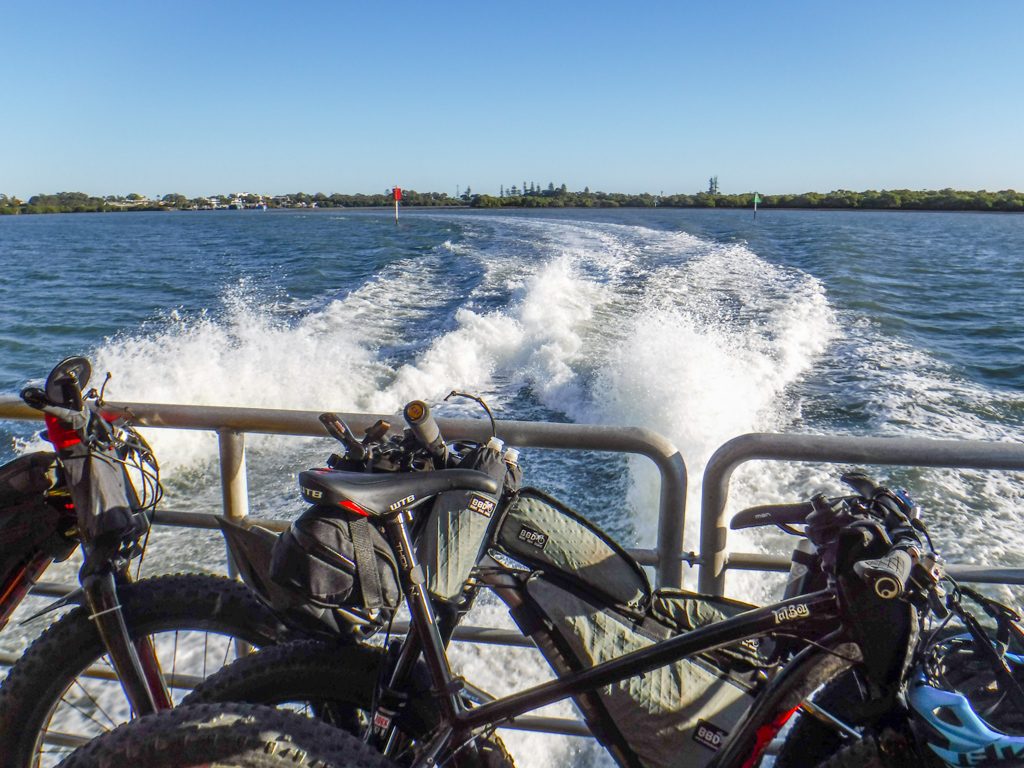 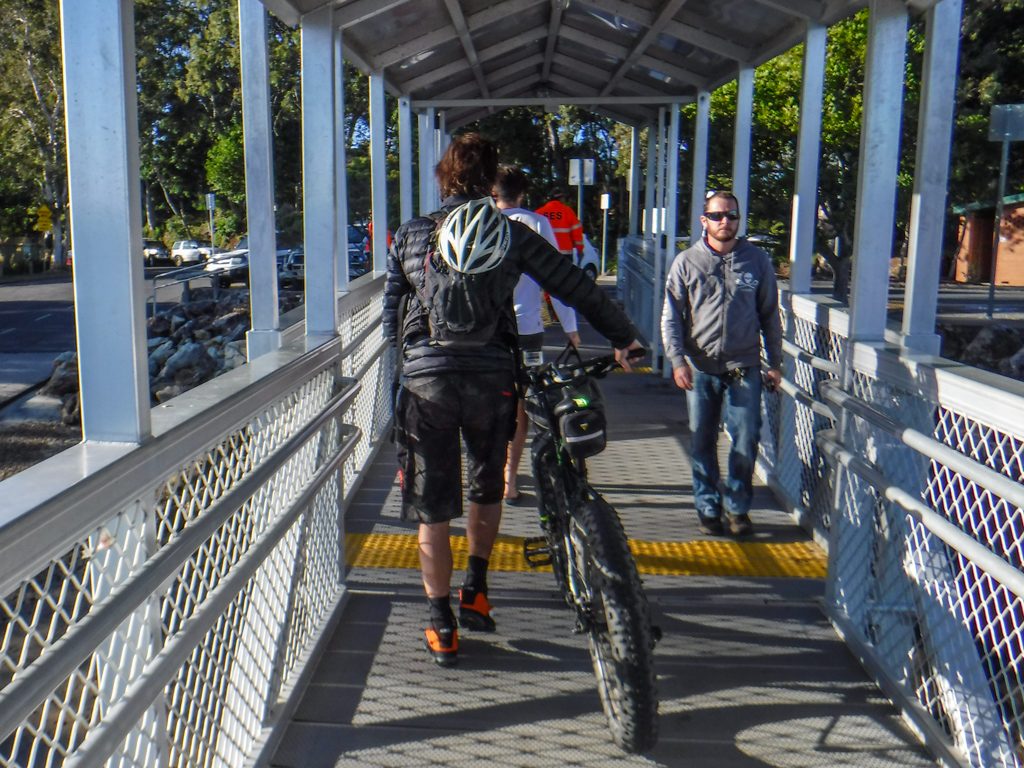 The trip took less than half an hour. 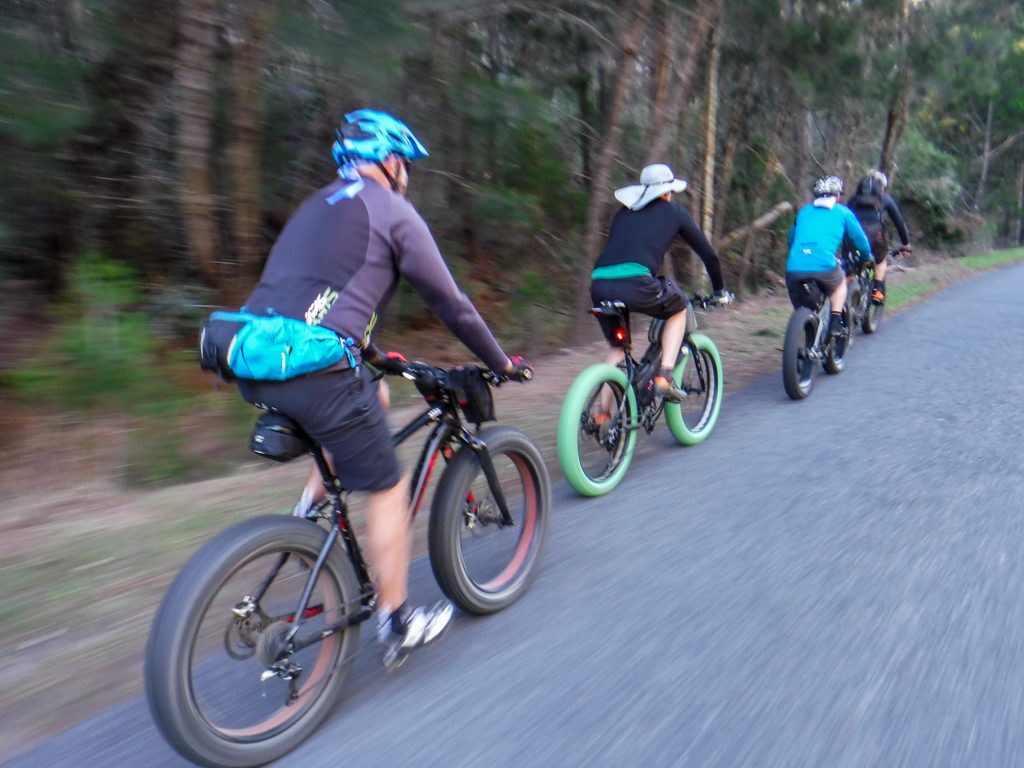 A few minutes later Jason led our peloton of fat bikes up the hill towards Brown Lake.

I’ve climbed this hill before with Adam on a bike laden with camping gear.  With less weight today, it was much easier.

Straddie is the second largest sand island on the planet (after Fraser Island).  So it makes sense to take a bike with big tyres if you’re going to ride there. 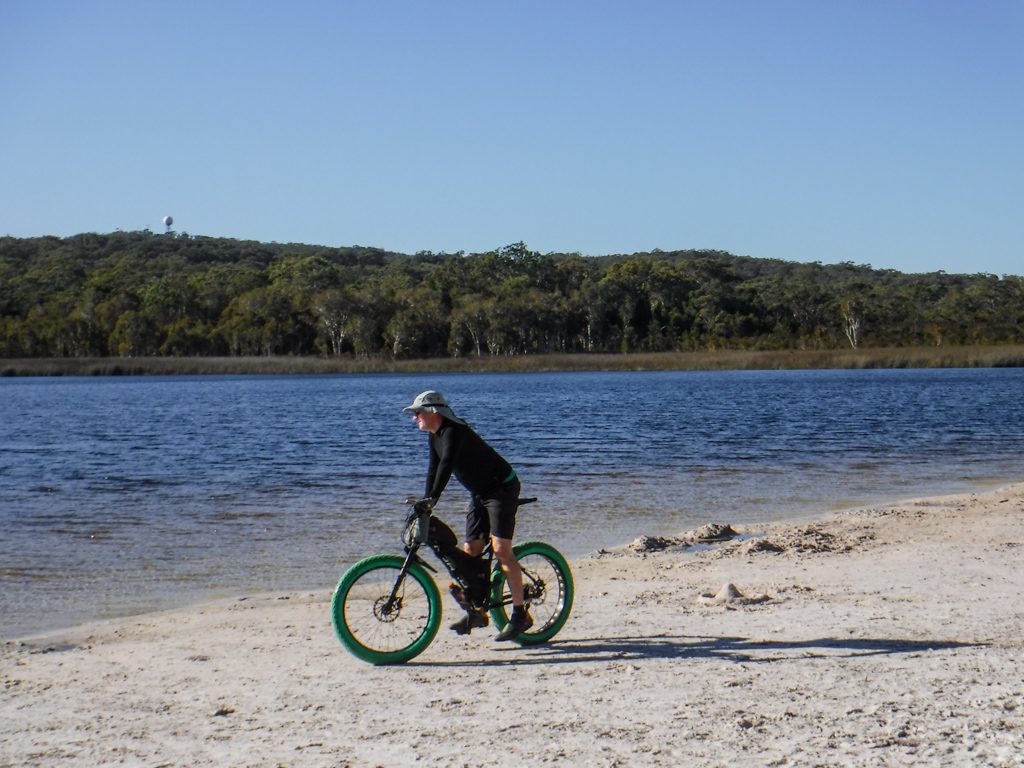 We followed the sandy track down to Brown Lake.  On the far hill behind the lake a large radio tower looked like a giant golf-ball on a tee.  That’s where we were heading. 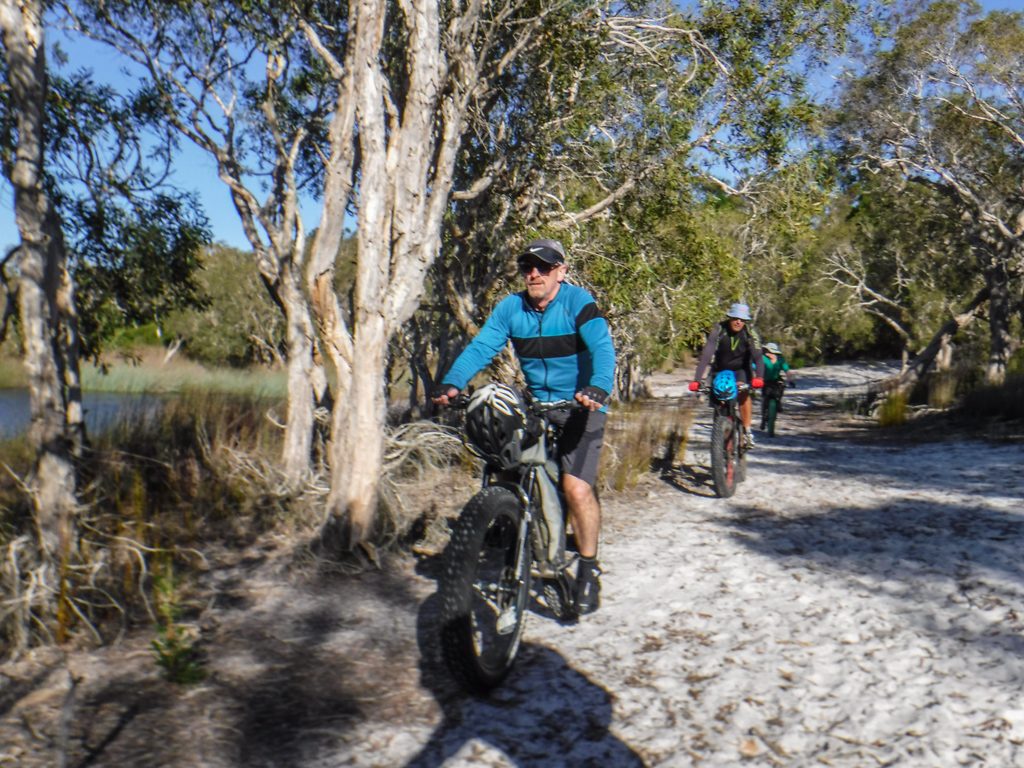 We snaked through the paperbark trees along the shoreline, enjoying the flat trails… 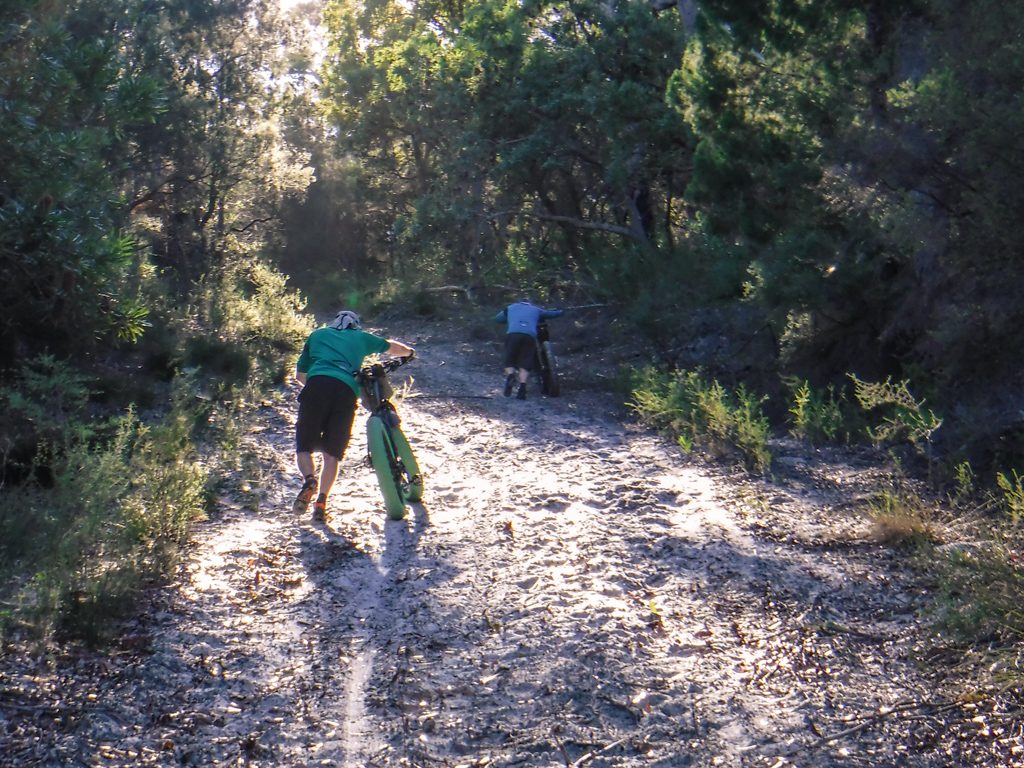 … until we hit the hill.  It was steep, so we dismounted and slowly pushed upwards. 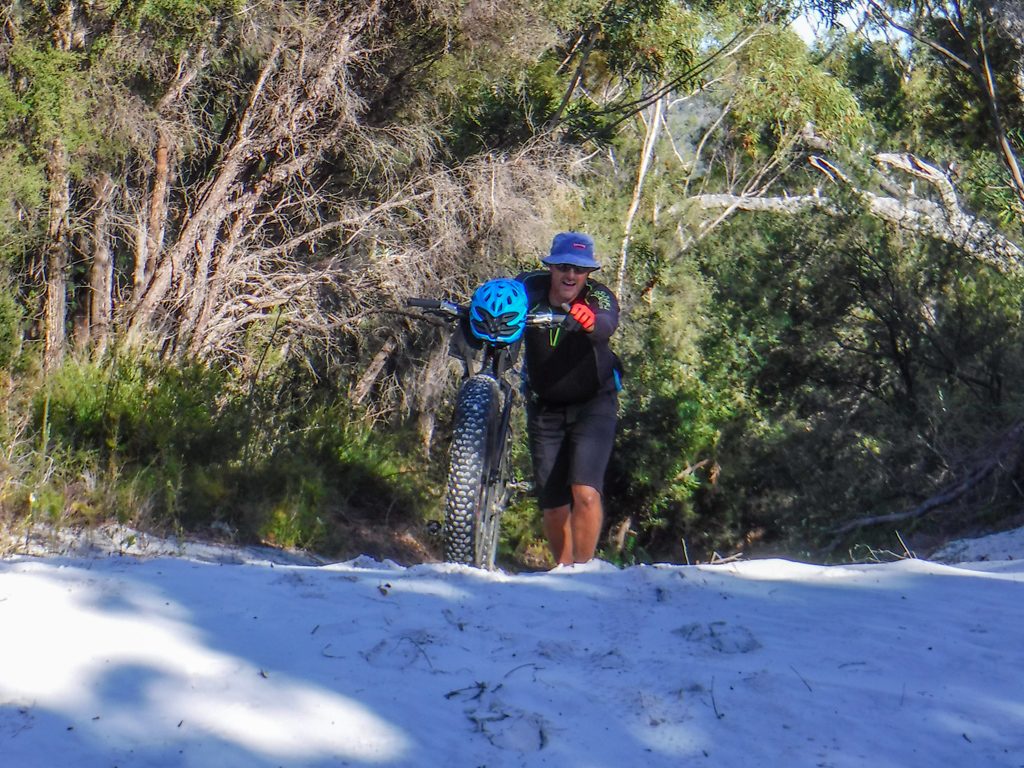 Thankfully we didn’t have to walk far.

I’ve ridden parts of this track before on a standard mountain bike with skinny tyres.

That was not much fun.

Today was much easier.

We turned right and headed towards the golf-ball on the hill. 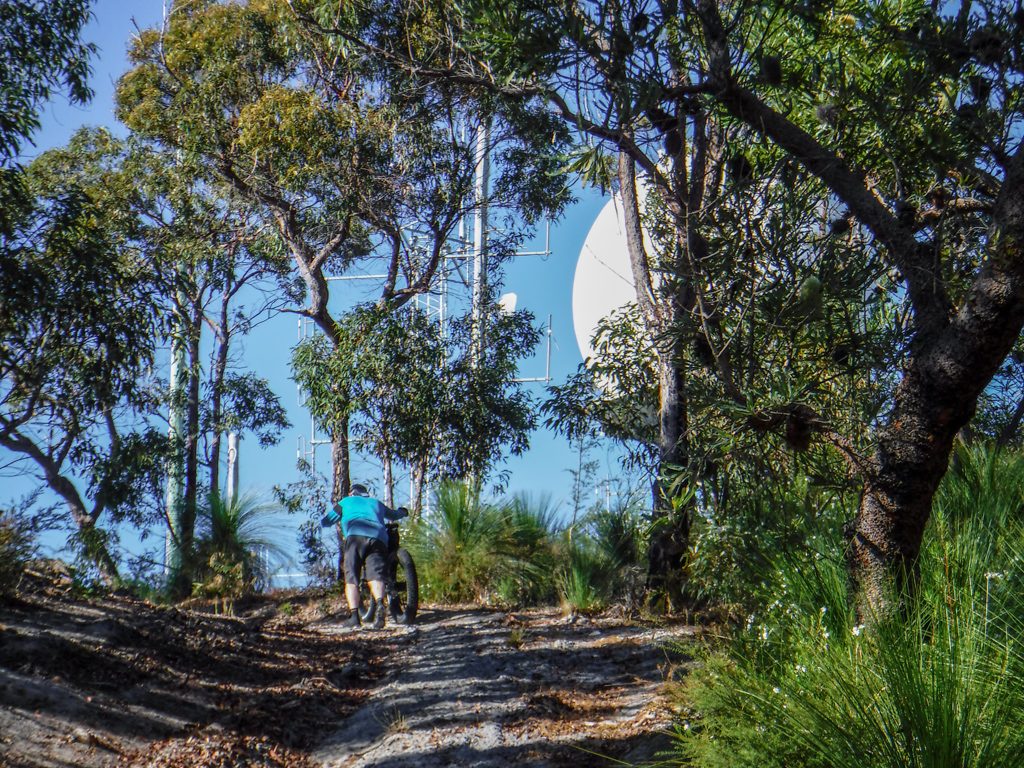 After another short uphill push…

We made it.  This aircraft navigation beacon sits atop Mount Hardgrave, the highest point on the island.  The local Quandamooka people call it “Bippo Oyerpunya”.

I thought how ironic it was that this huge golf-ball sat on a hill next to the local golf course.

We enjoyed an impressive 360 degree panorama from the top:  Moreton Island to the north, the bay to the west, and the Gold Coast to the South.

Shortly after leaving the summit, we had to descend a steep sand dune.

The loose sand made riding difficult.

We rolled part of the way, but ended up walking most of the way down, just to be safe.

Below us, a couple of 4×4’s stopped and looked up to enjoy the show…

Apart from a couple of minor mishaps, we made it safely to the bottom. 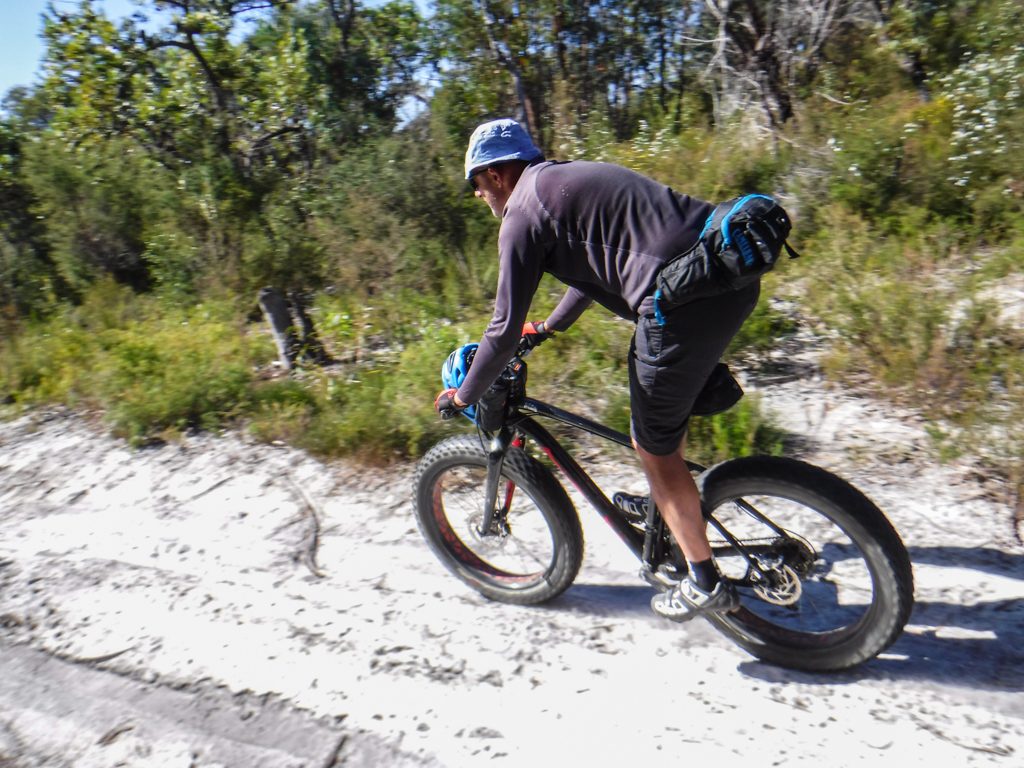 From there we followed a twisting sand track downhill towards Blue Lake.   Jason described it as being like a “luge” track with smooth S-shaped bends, and high banks.

Rather than visit the lake, we decided to ride up to the lookout above it.

From here we enjoyed some stunning views out to sea.

Every few seconds a whale would surface for a breath before sliding below the inky blue water again. 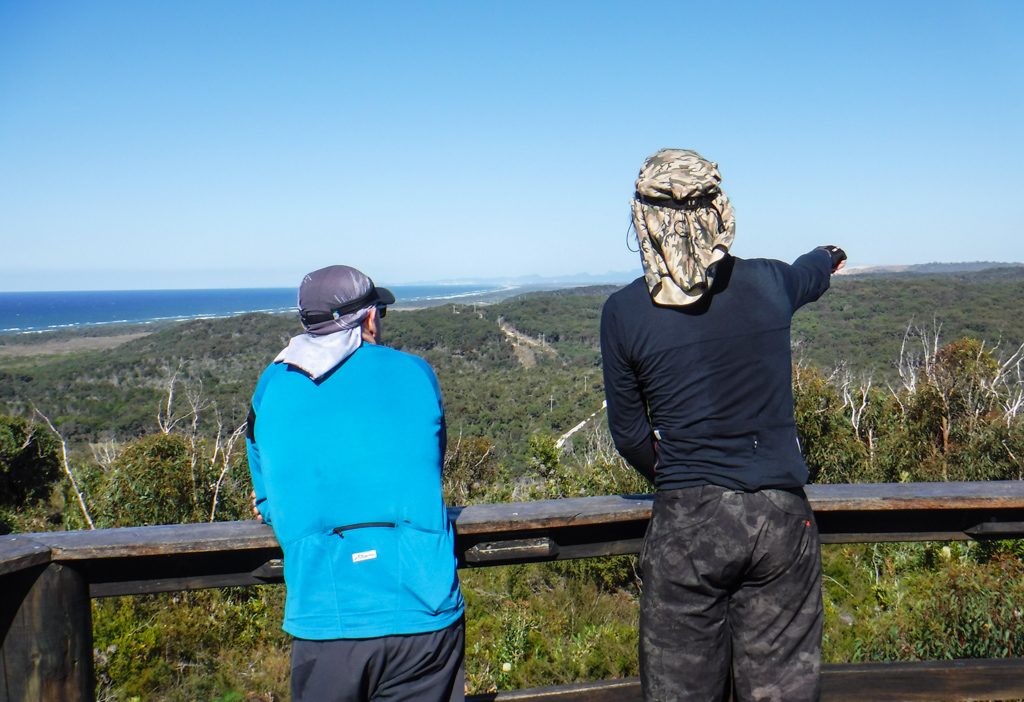 Jason pointed out the track we had followed to get here.

In the distance we could make out South Straddie, the Gold Coast, and the Macpherson Range.

We were in no rush today, so we took a few minutes to have a snack and enjoy the panorama.

As I followed my buddies back down the hill I thought about all the places I’d been in the last couple of months.  Sometimes travellers can feel a bit depressed after the excitement of an extended trip.  But for me, the sandy trails of Straddie were the perfect antidote for those feelings.  I was in the right place today. 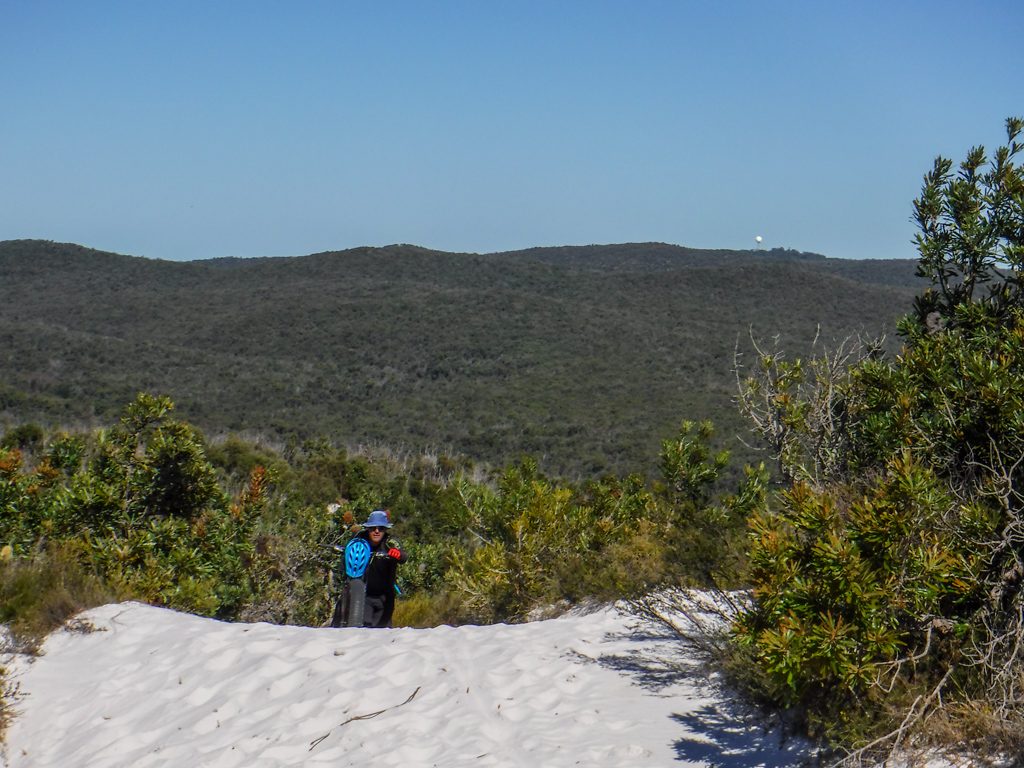 After following the “tripod track” downhill for a few kilometres, we crested another hill with another amazing view.

What a beautiful place.

Ahhh – so this is why it’s called the Tripod Track.  This “trig point” at the lookout is an important reference point for surveyors. 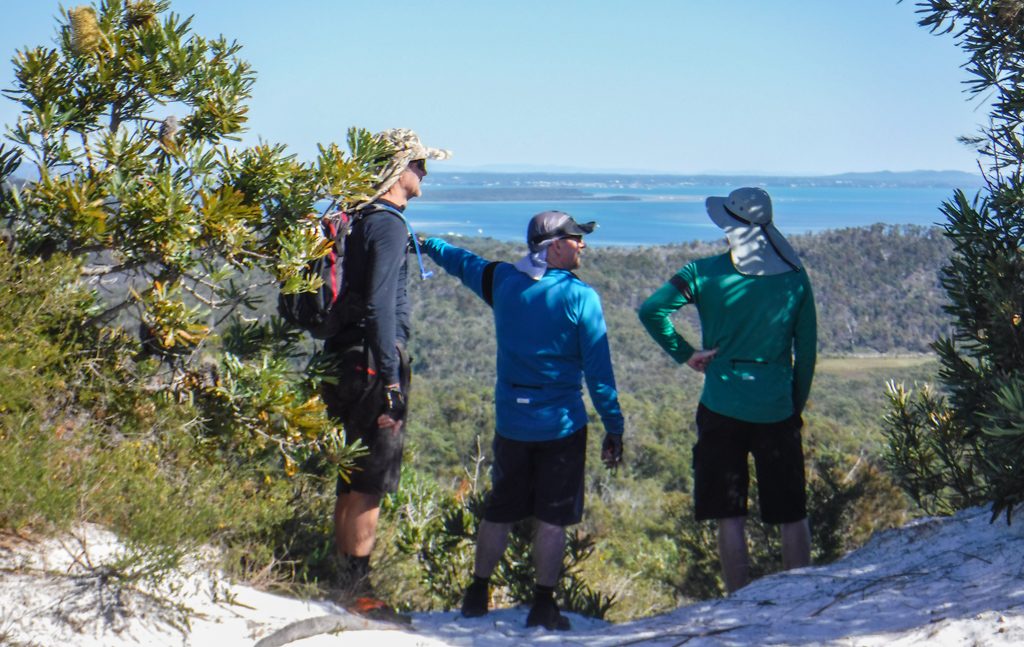 On the western horizon we could make out Flinders Peak and the Great Divide.  Mountain bikers love pointing out far-away places where they’ve left their tyre tracks. 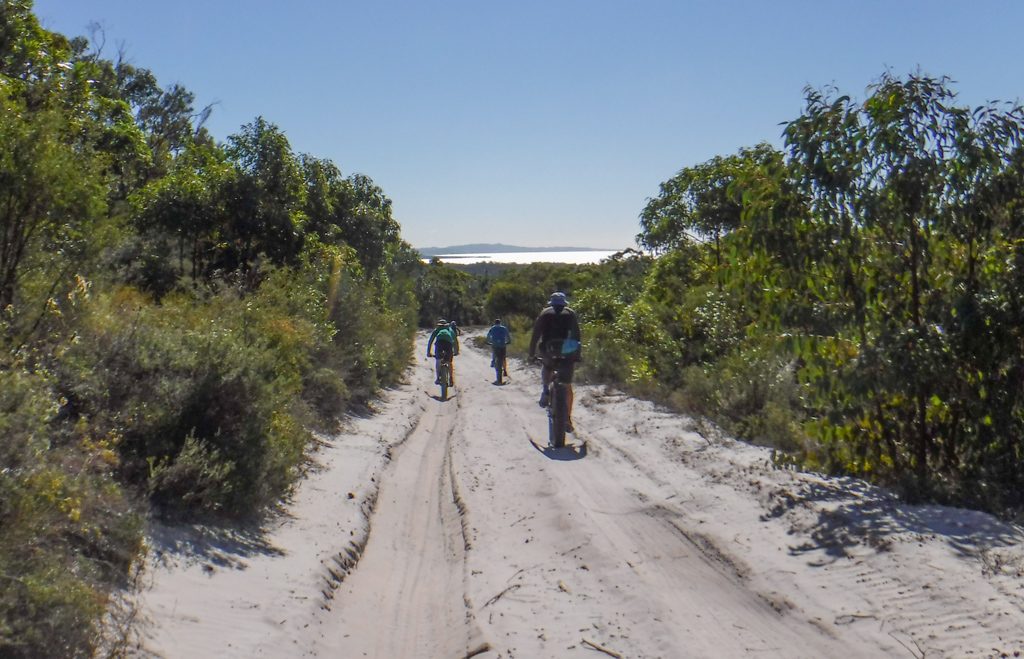 The Tripod Track continued gently downhill for a few more kilometres.  Ahead of us, sunlight twinkled on the waters of South Passage between Straddie and Moreton. 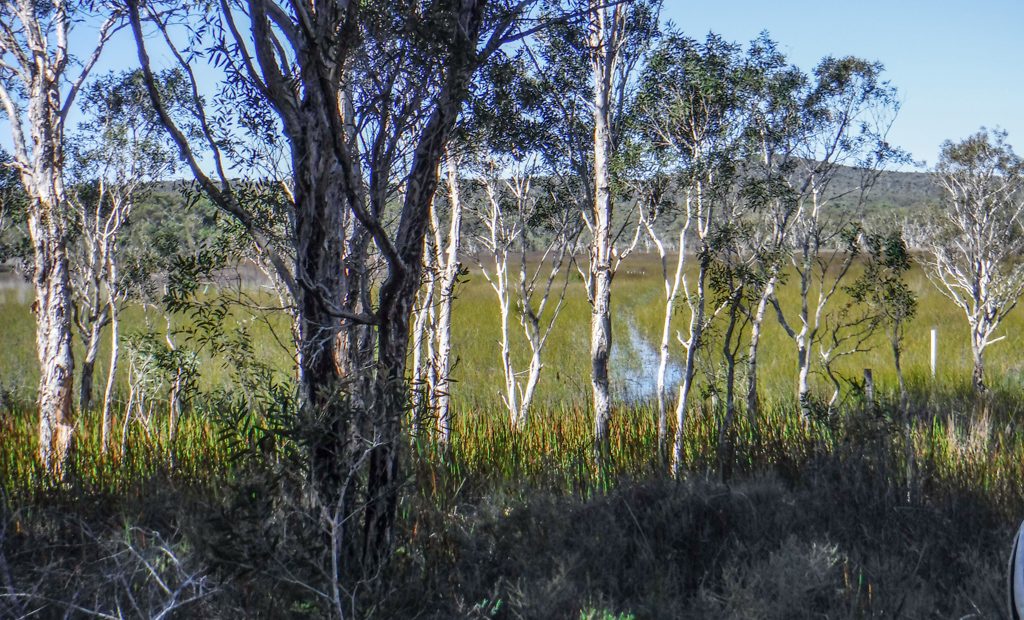 The track spat us out on the banks of the Welsby Lagoons near Amity.

The “Peat Mine Track” followed the lagoon edge for a while.  We rolled through lush ferns and dense paperbark trees. 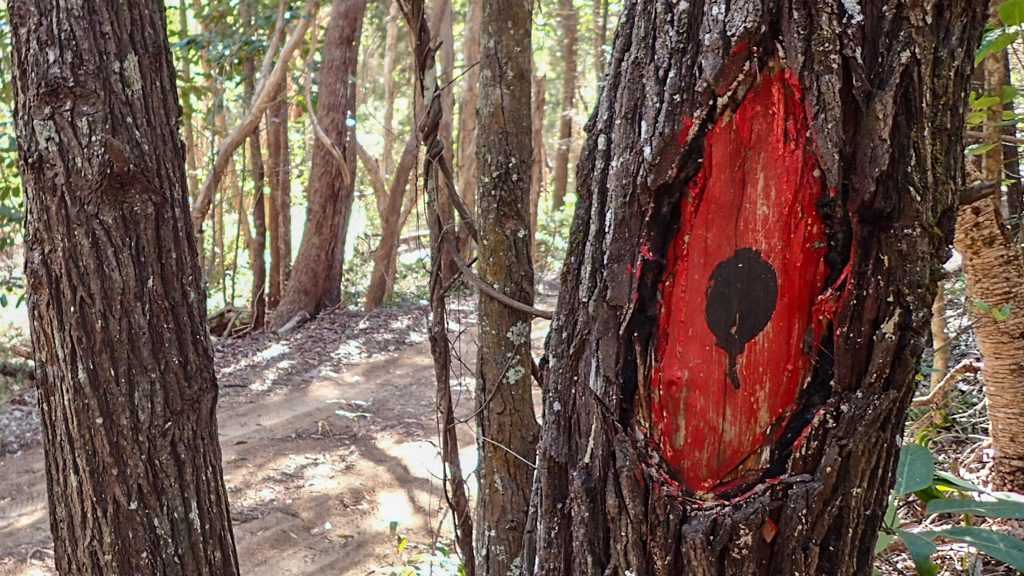 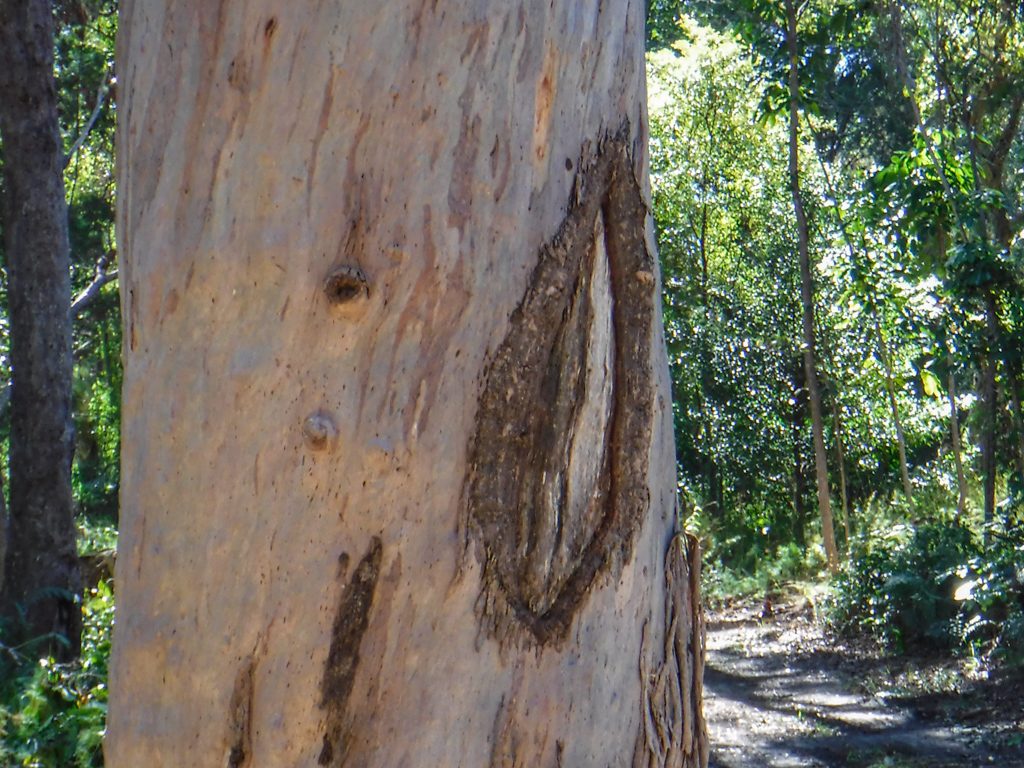 We passed ancient indigenous scars in the bark of trees.  The Qandamooka still use these markings on trees to indicate important ceremonial areas.

At Amity we stopped for a late lunch at a local cafe. 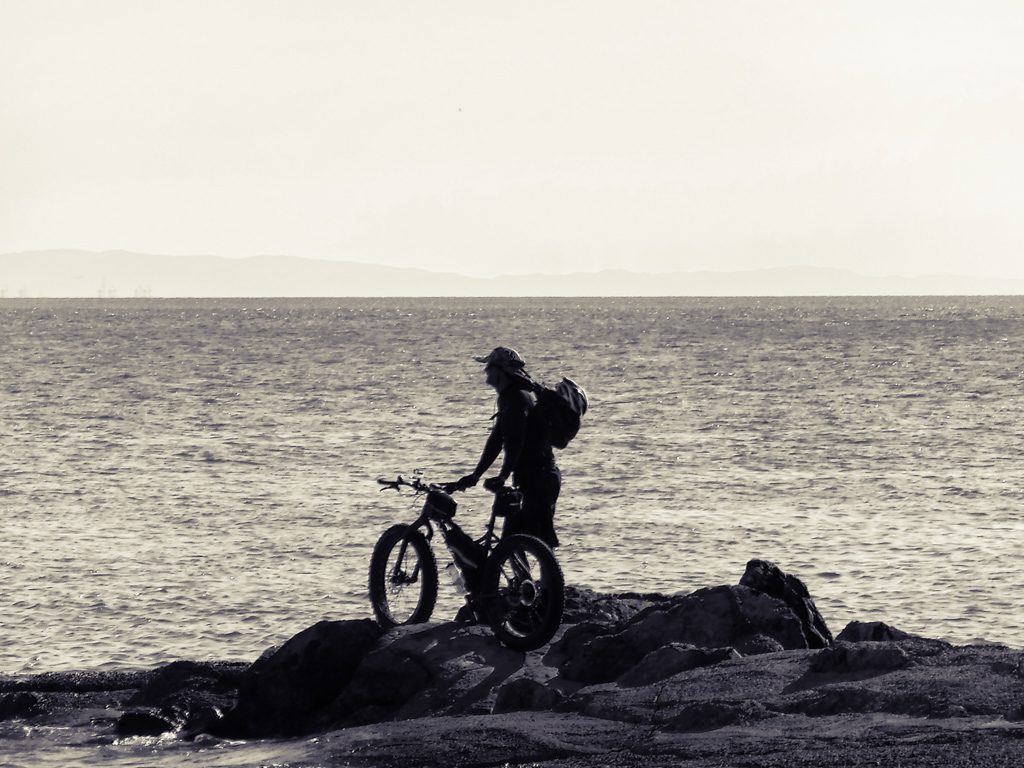 Life is unhurried in Amity.  There’s no bustling traffic, no noise except the whisper of waves and wind. It’s the perfect place to unwind. 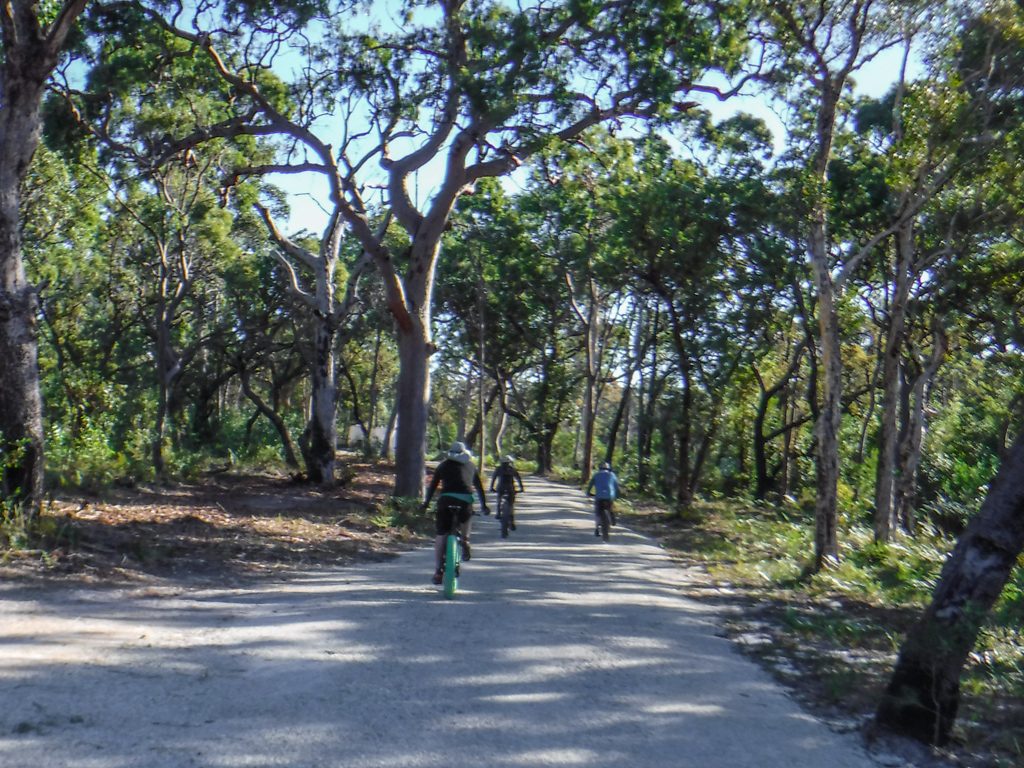 After lunch, we followed some quiet tracks and roads back towards Dunwich. 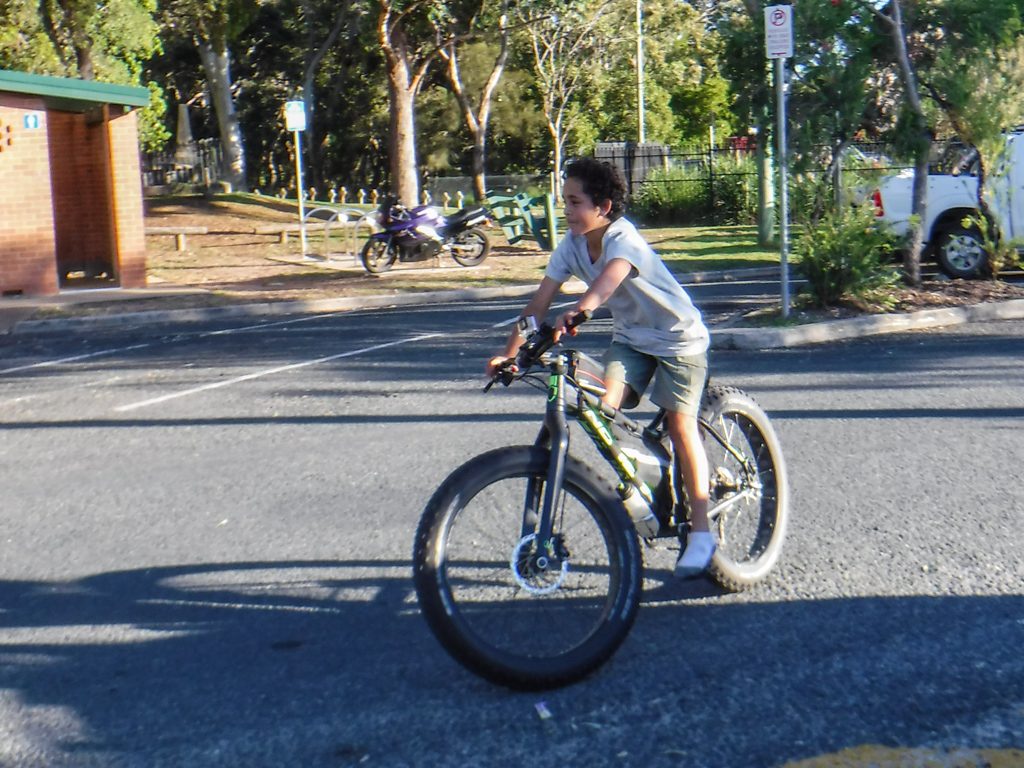 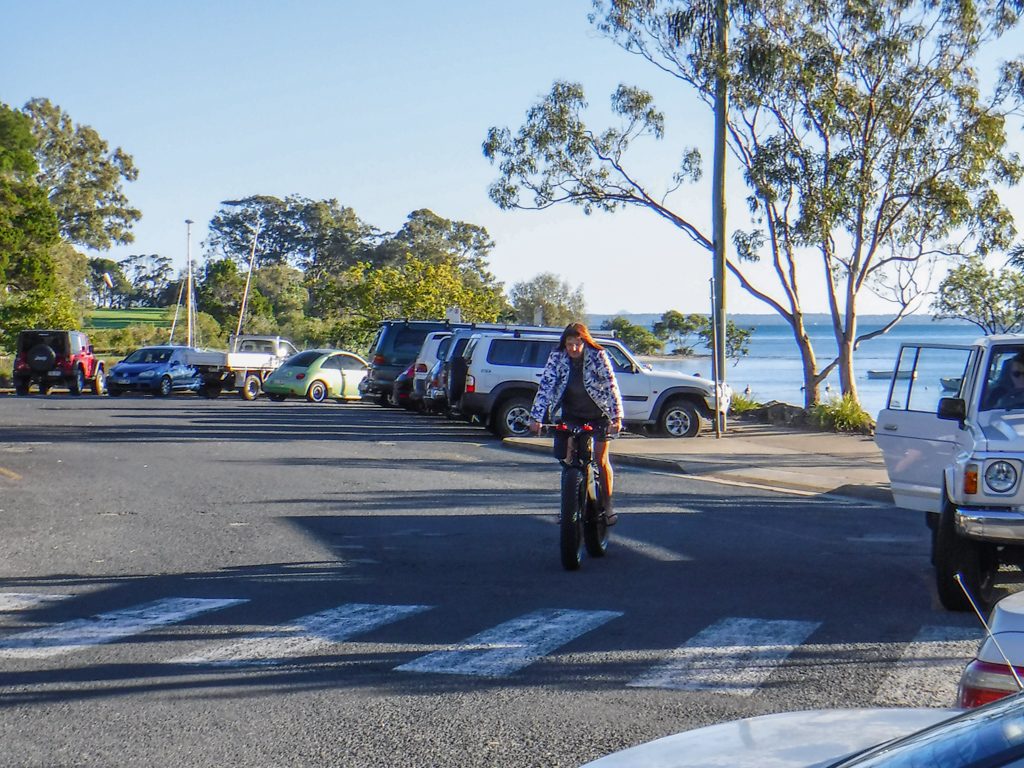 While we waited for the water taxi, a few interest onlookers asked us about our bikes.

“Why don’t you try it out?” I suggested.

Our new friends loved the fatbike experience, but Jason wondered if he’d see his bike again.

As we worried about our bikes, a languid koala lazed in the warm afternoon sun, and looked down on us from a tall gum tree.

That’s what Straddie had been saying to me all day.

We rode about 55 kilometres in about seven hours. During that time I burned just over 3,000 kcal as we climbed almost 900 metres in vertical ascent.

This would be a really difficult ride in summer.

In the mild temperatures of early July (can you really call it “winter”?) I’ll rate this one 8 out of 10 on the tough-o-meter. It’s hard work riding on sand all day.

Thanks Jason, Darb, Paul and Adam for a fun day out. And thanks, Jason, for organizing the ride and letting me relax for the day.