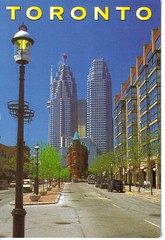 Thanks for the postcard, Louise.

The Gooderham, or Flatiron, Building at Front and Wellington Streets, was built by George Gooderham in in 1891, predating New York’s more famous Flatiron building by 10 years.

William Gooderham, George’s father, came from Yorkshire in 1832, to help his brother-in-law James Worts who had a bakery and mill at Parliament and Mill Sts. In 1834, James committed suicide. He was depressed because his wife had died in childbirth. William Gooderham, took control of the factory and re-named it Gooderham and Worts. (The ‘Worts’ being for James’ eldest son, James Gooderham Worts, who inherited his fathers’ share of the firm. In 1837, with a surplus wheat, they tried their hands at producing beer and whiskey from the wheat. The Gooderhams became experts at making good tasting beer and alcohol and, as a result, very wealthy.