Today I walked a large 20km loop through the rural tracks around Walloon while Eric rode a larger 60km loop. We had no idea who would get back first. 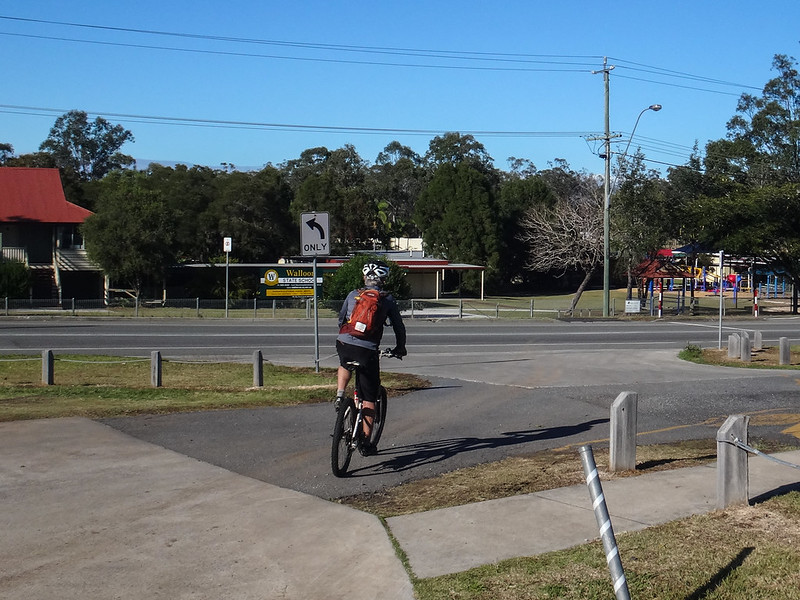 We’ve had many fun adventures that have either started or ended at Walloon. It’s on the railway line west of Ipswich, so in the past we’ve ended our point to point rides here, then caught the train home.

Today was strange. Although there were two of us – we’d spend most of the day apart. As Eric rolled away ahead of me, I realized our paths would only cross again some time later in the day. The question was “When?” 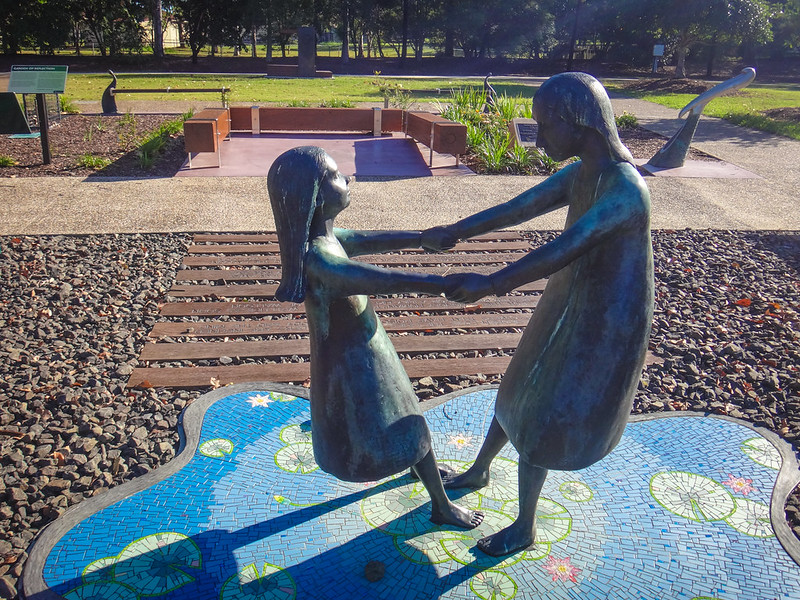 On the way out of town this beautiful sculpture caught my eye in the playground. It’s a memorial to a couple of young girls who drowned here in the 1890’s while trying to pick lilly flowers in a local lagoon. Henry Lawson wrote about the tragedy in his poem “The Babies of Walloon”. (Keep reading – I’ve included Lawson’s poem at the end of this story) 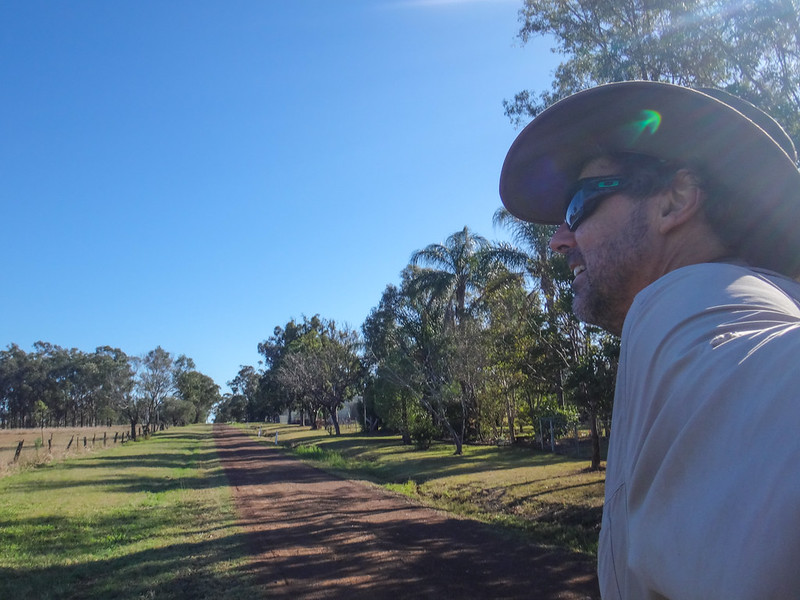 I walked out of town along Rohl Road, a couple of minutes behind Eric.

When planning our route, I set the course as though I was going to ride it on a bike and aimed to stay away from paved roads, following as many rough dirt tracks as possible. 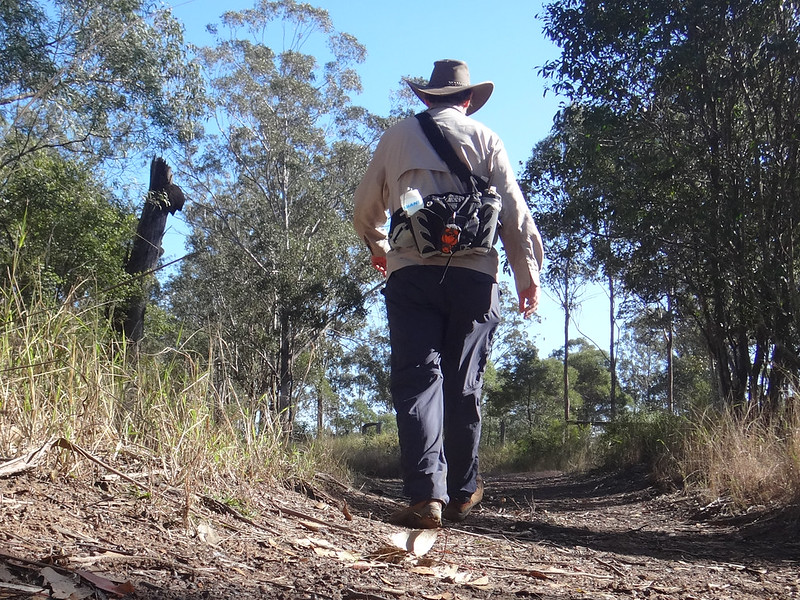 There are many dirt tracks around here, so sticking to the plan was easy. 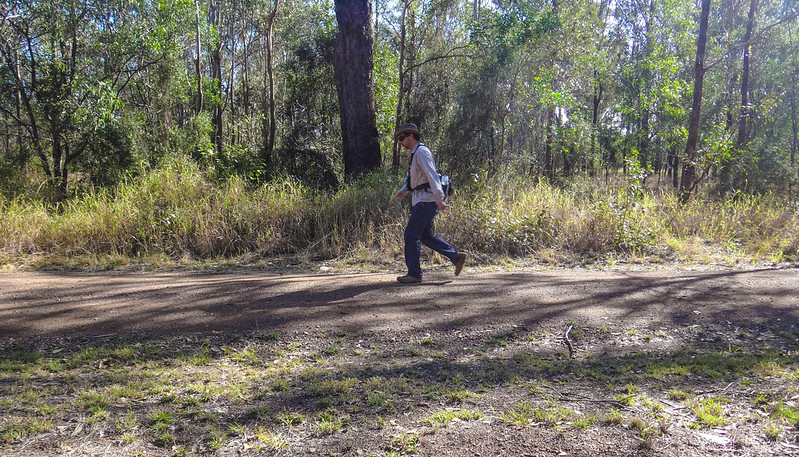 At Raycourse Road, Eric continued north to Haigslea while I headed west. 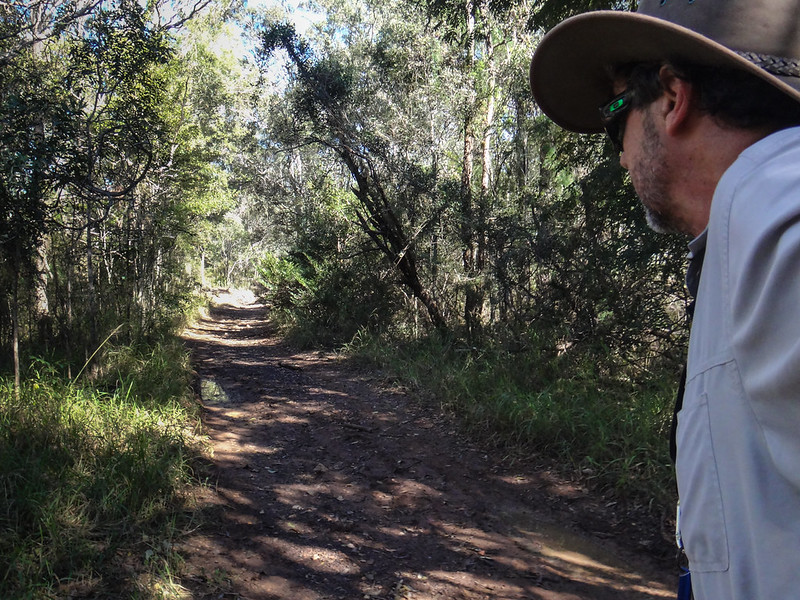 I had seen this track on the map and was curious. As I wandered along it, I kept thinking to myself “This would be great to ride on a bike!” 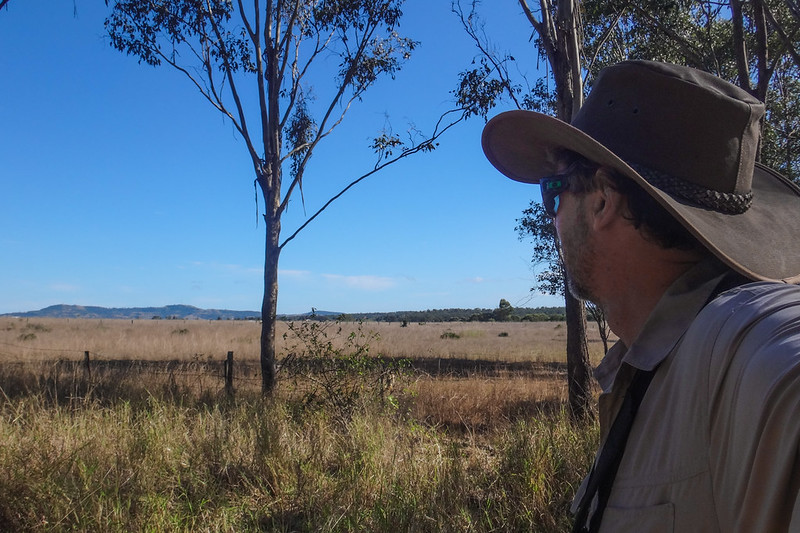 Across the brown paddocks, I could see the hills of Marburg on the horizon. Eric’s course led there. 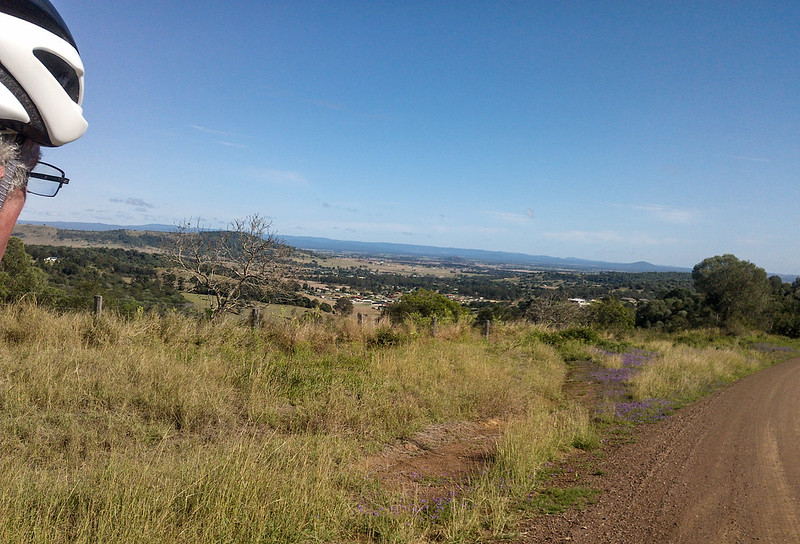 While I looked at the hill on the horizon, Eric stood at the top of it, enjoying the view west towards Minden. He said that “Postmans Track” which leads to the top of this hill and down the other side, is a steep climb and is rough in parts. It’s perfect on a mountain bike, but you wouldn’t enjoy taking a 2WD car up there. 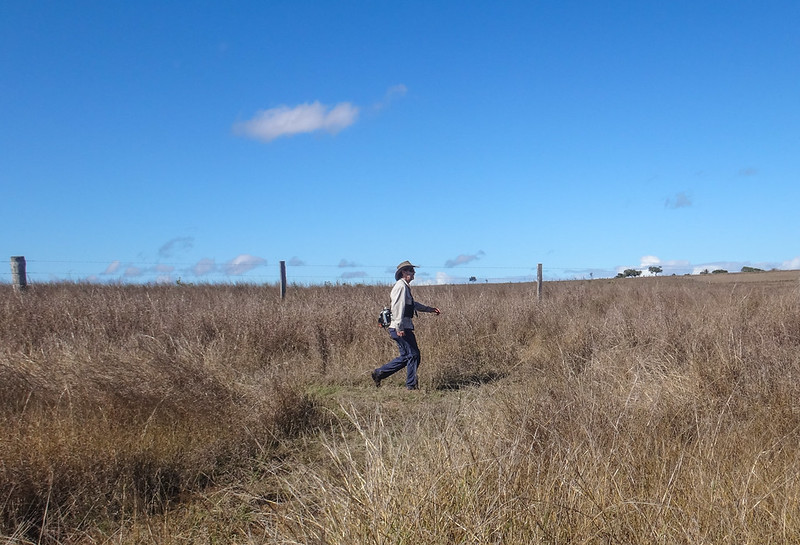 I was loving this. Even though I was unable to ride, I could still satisfy my hunger to explore new tracks. The only difference was that it was a bit slower than what I was used to. 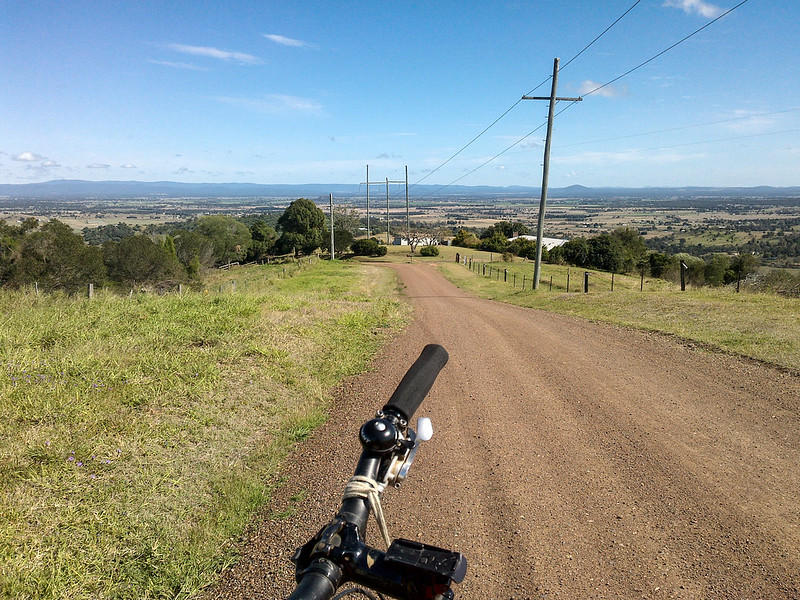 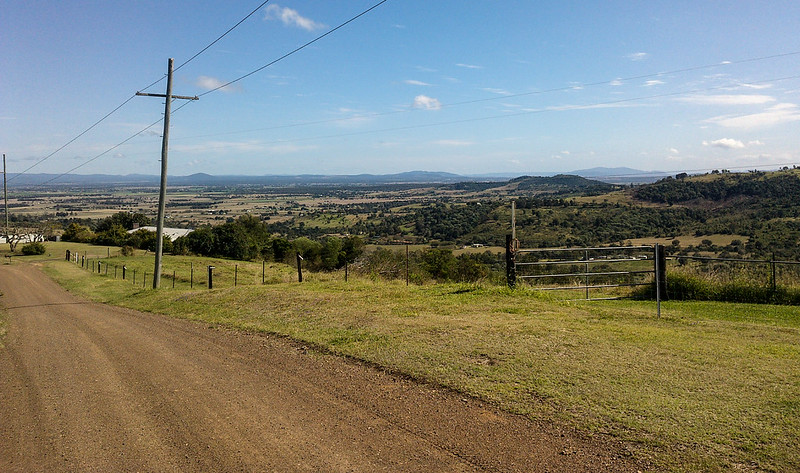 On his bike, Eric enjoyed the quick descent from the top of Postmans Track down to Minden, with the patchwork quilt of the Lockyer Valley stretching before him to the foot of the Great Dividing Range. 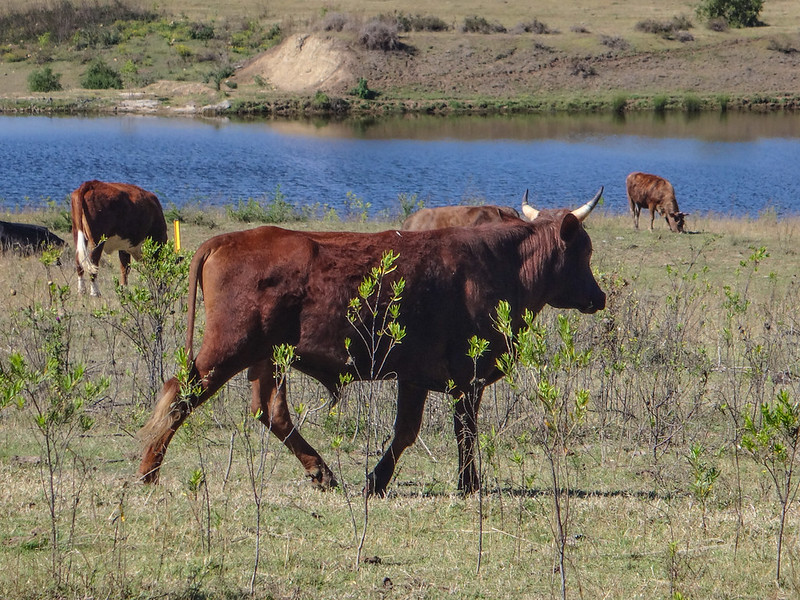 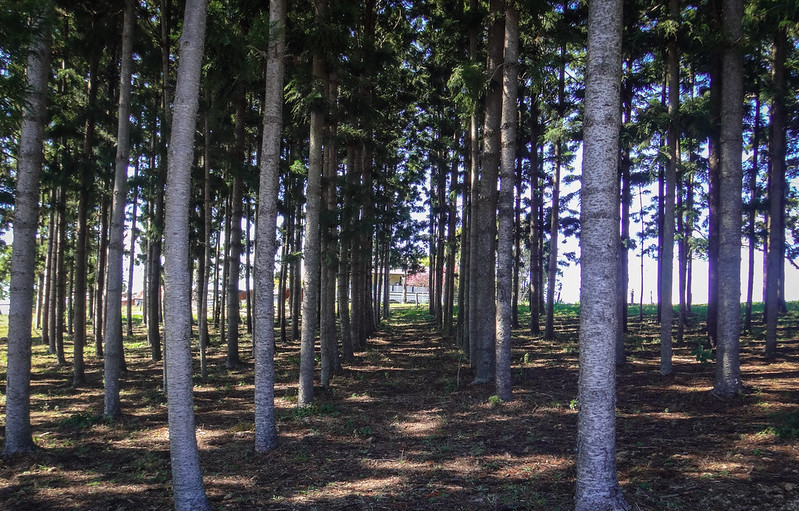 … and Hoop Paine plantations. I can’t seem to escape these impressive native trees. 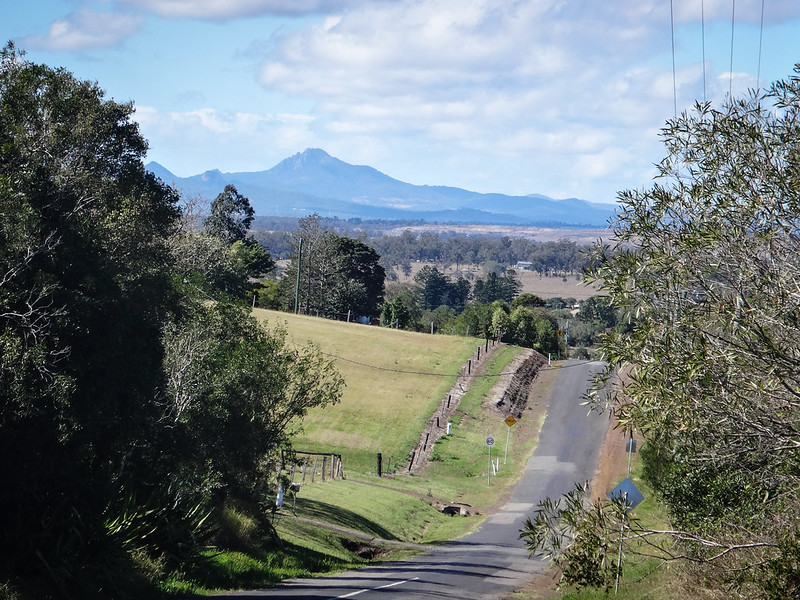 Eventually my track intersected a paved road. To the south I could see Flinders Peak, and remembered the time Eric and I had tried to drag our bikes up there. What were we thinking? 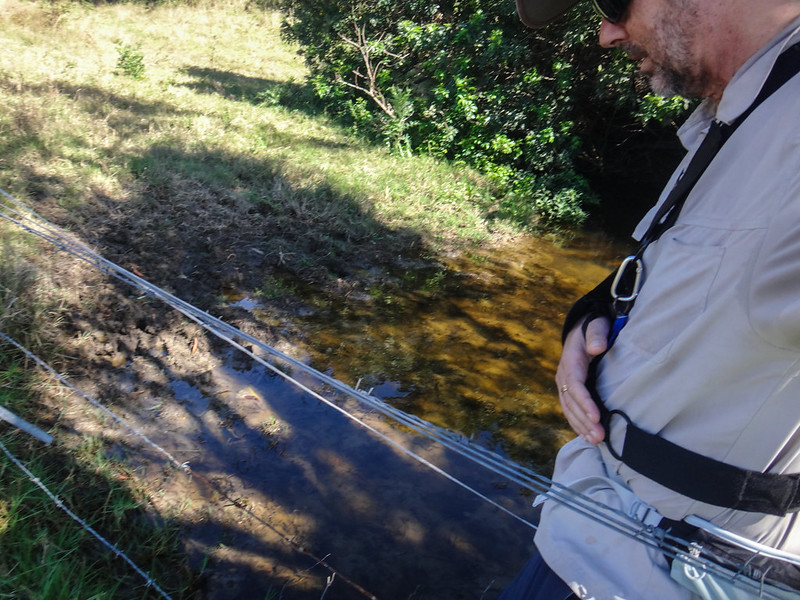 Sticking to the plan, I shunned the paved road, and kept walking west along another track – Argows Road.

I clumsily tried to cross a small creek without getting my feet wet. The only semi-dry section was wedged between an electric fence and some barbed wire.

To make the challenge more interesting, I had one arm in a sling.

Surprisingly, I made it across without getting wet, or electrocuted, or cut on the wire – all with one hand. Who says walking isn’t as technically challenging as riding? 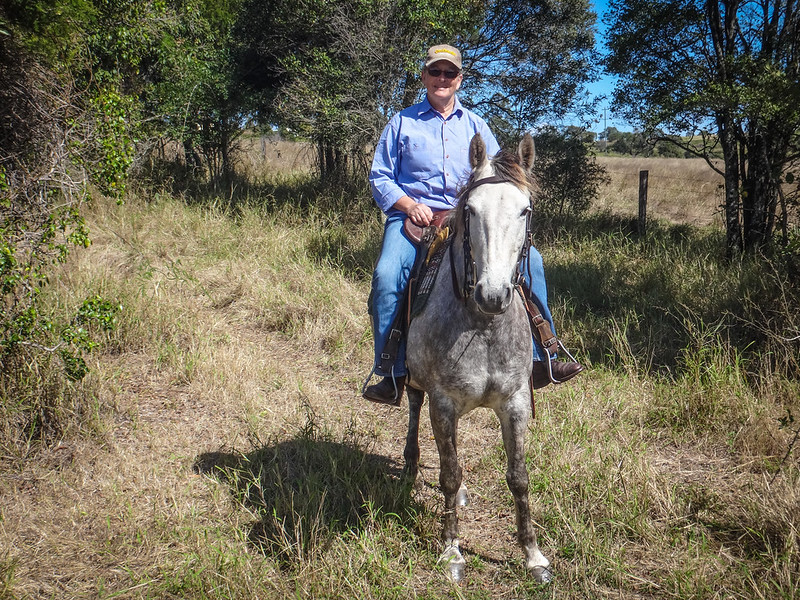 After rolling under a second barbed wire fence I met Jenny and Willow.

“G’day” I yelled out in the friendly universal Aussie greeting.

“I was following this track – I hope I’m not on your property,” I asked.

Jenny explained that this was indeed a public track and that she was happy to see me.

We chatted for a while, and I picked Jenny’s brains for information about other tracks in the area. She told me about a great dirt track which led up over Mount Marrow, and that I should check it out. 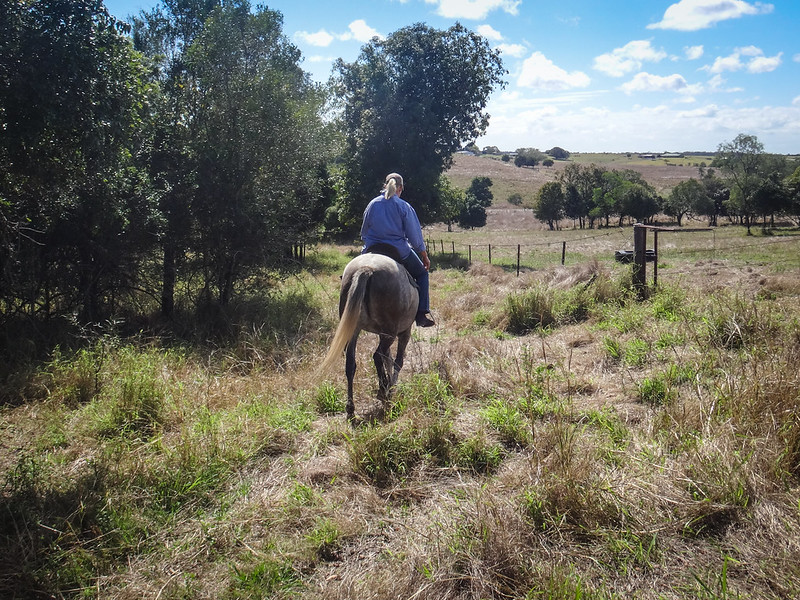 It wasn’t until after I left her that I realized Jenny had described in detail the course I had already planned to take. 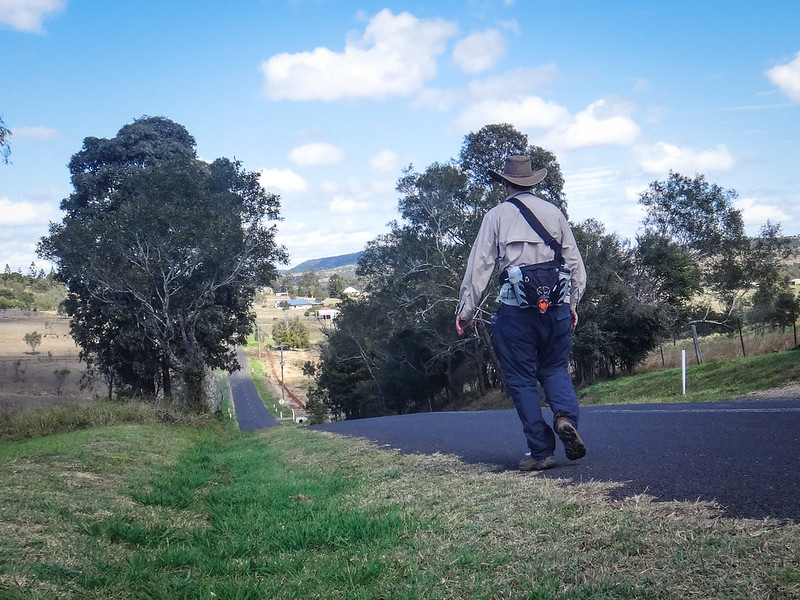 At this point I had to follow a quiet paved road for a couple of kilometres. As I marched I muttered a half-chant / half rap song under my breath. I was glad no one could hear me as I metered out the words in time to my footsteps. (In case you’re interested, it was a crazy made-up ditty about being “Ten Feet Tall and Bulletproof”) 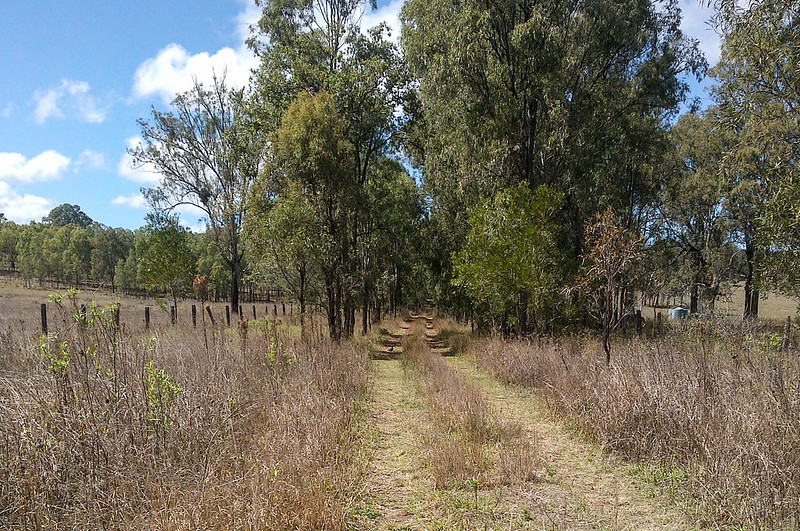 While I marched, Eric messaged me to let me know he had reached “Woolshed”. This was a tricky part of his course which left the gravel road and followed two faint tyre tracks up a hill into the scrub.

I told Eric earlier that I was unsure about this section. If he was unable to get through, he’d have to back track and follow a “Plan B” course through Grandchester, adding over ten kilometres of busy main roads to his ride.

There was no need to worry – Eric easily navigated his way through this section to the top of the hill in Woolshed. 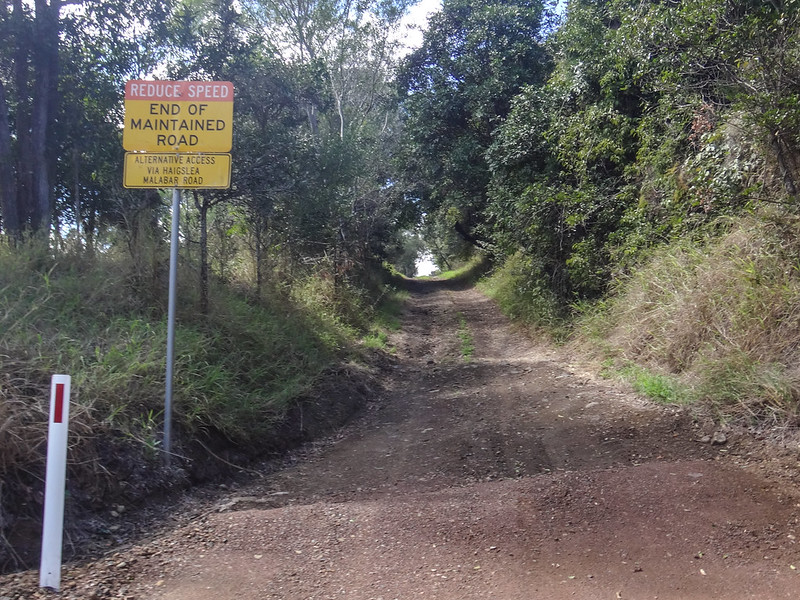 With a manic grin I left the paved road to follow a rough old track up Mount Marrow – just as Jenny had described. 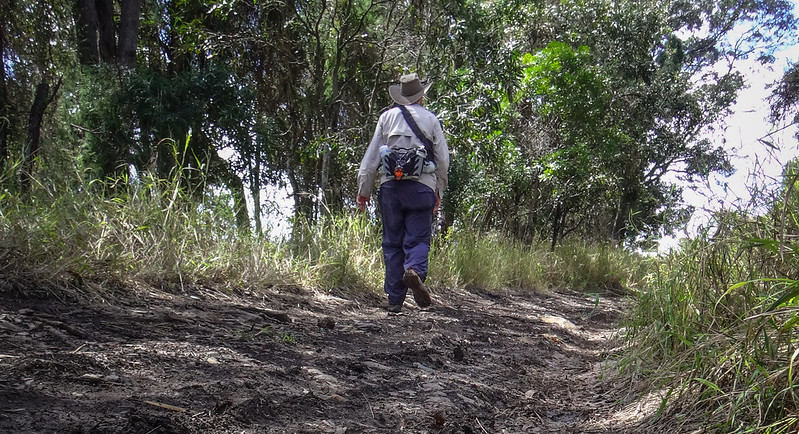 It was steep and rough – perfect. 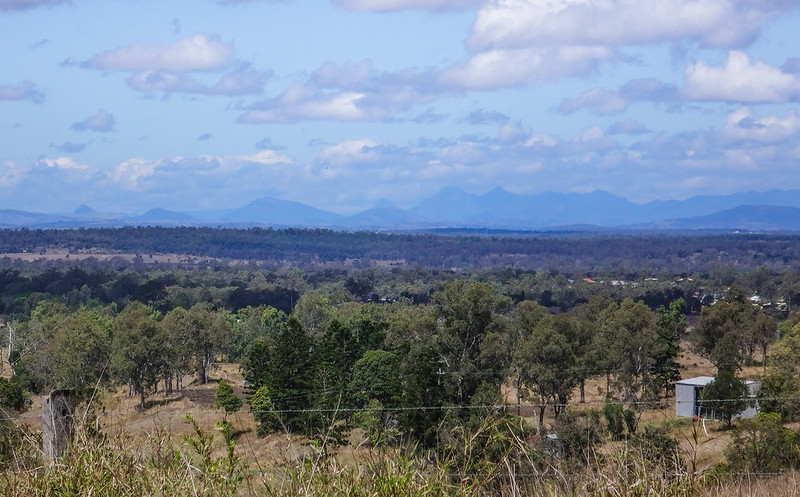 Looking south from the top I could just make out the peaks of Mounts Maroon and Barney, with the odd square peak of Lindesay poking up between them on the horizon. Like many peaks around here, they’re not just odd misty shapes in the distance, they’re places we’ve happily explored on our bikes. Seeing familiar landmarks like this often gives me a comforting feeling that I’m near to home – even if I’ve travelled a long way from our house. 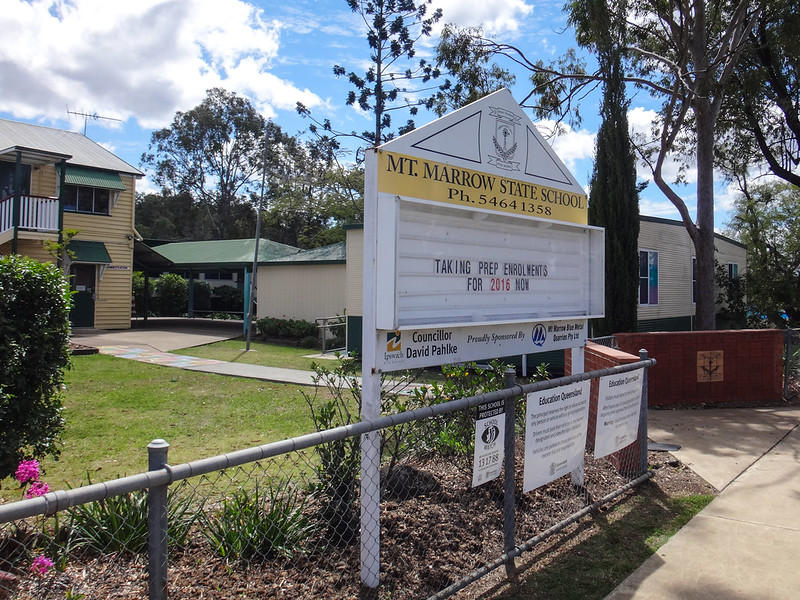 After a quick walk down the other side of the hill I was at Mount Marrow school just like Jenny had described.

I quickly cast my eye over the fence to see if there were any water taps. Schools are a good place to top up with water. I couldn’t see any, but that didn’t matter – I still had plenty of water.

That’s one thing I’ve noticed about walking: it doesn’t demand as much water consumption as riding a bike. For a 4 hour hike like this, I only needed about one and a half litres, while I’d probably need three litres if I was riding for the same period of time. 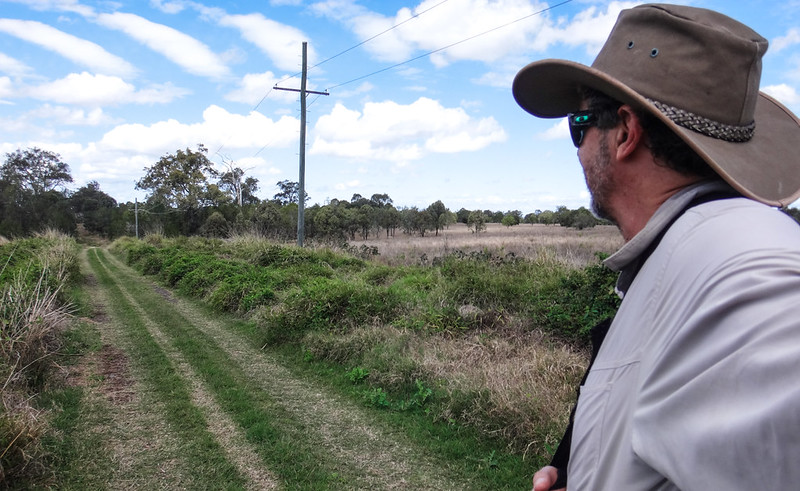 As I turned down another farm track, I kept glancing over my shoulder. Where was Eric? Was I going to get back to town before him?

I messaged him a few times just to check, but he was busy turning the pedals and wasn’t able to reply. 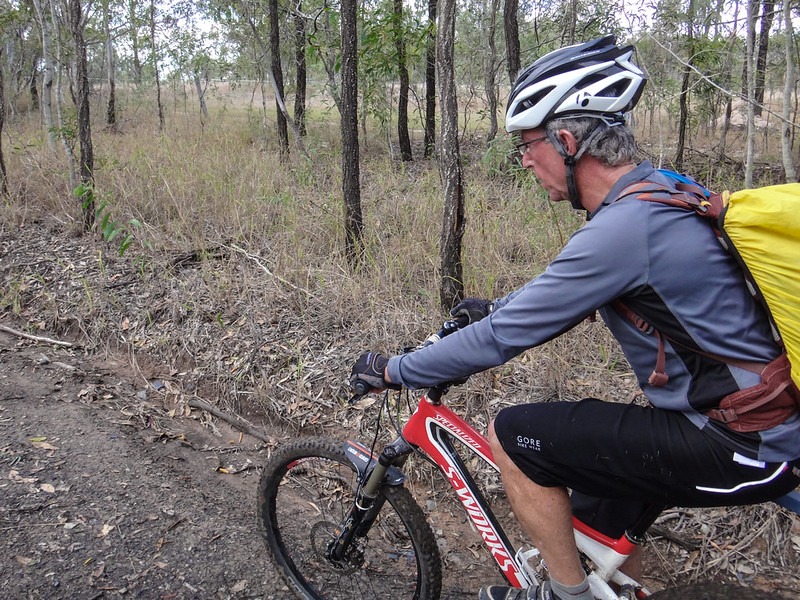 A few kilometres from town, just outside Thagoona, I heard the friendly tinkle of a bike bell as Eric caught up with me.

I jogged to keep up with him as I pumped him for information about where he’d been.

“How was the route? Did you have problems at Woolshed? What did you think of Mount Marrow? Did you get any photos for me?”

I was relentless in my curiosity. Perhaps that’s what happens when you walk alone for too long. 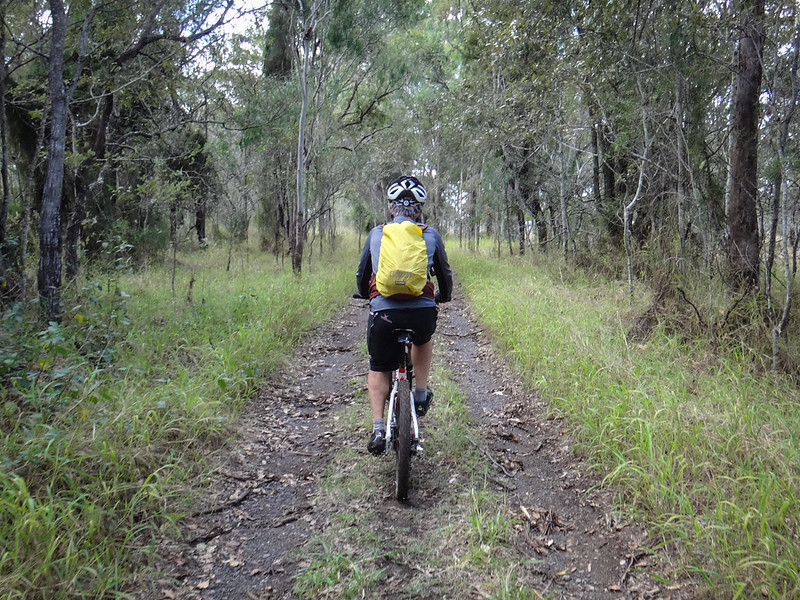 Eric got back about half an hour before me. 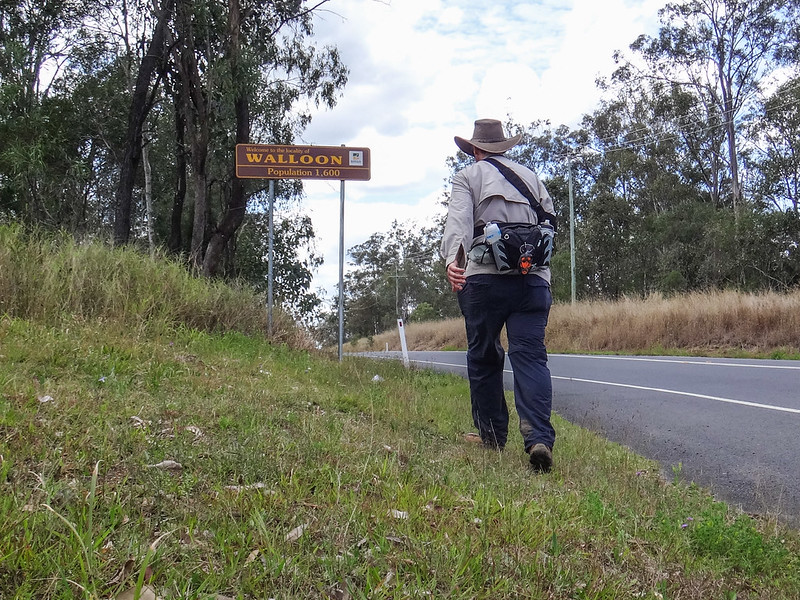 Not wanting to keep him waiting, I picked up the pace a bit towards the end.

My feet were sore.

A friendly young woman stopped her car next to me by the side of the road.

I was insane – I politely refused, and kept walking into town to meet Eric at the pub.

I might have been late, but at least I did it all under my own power 🙂