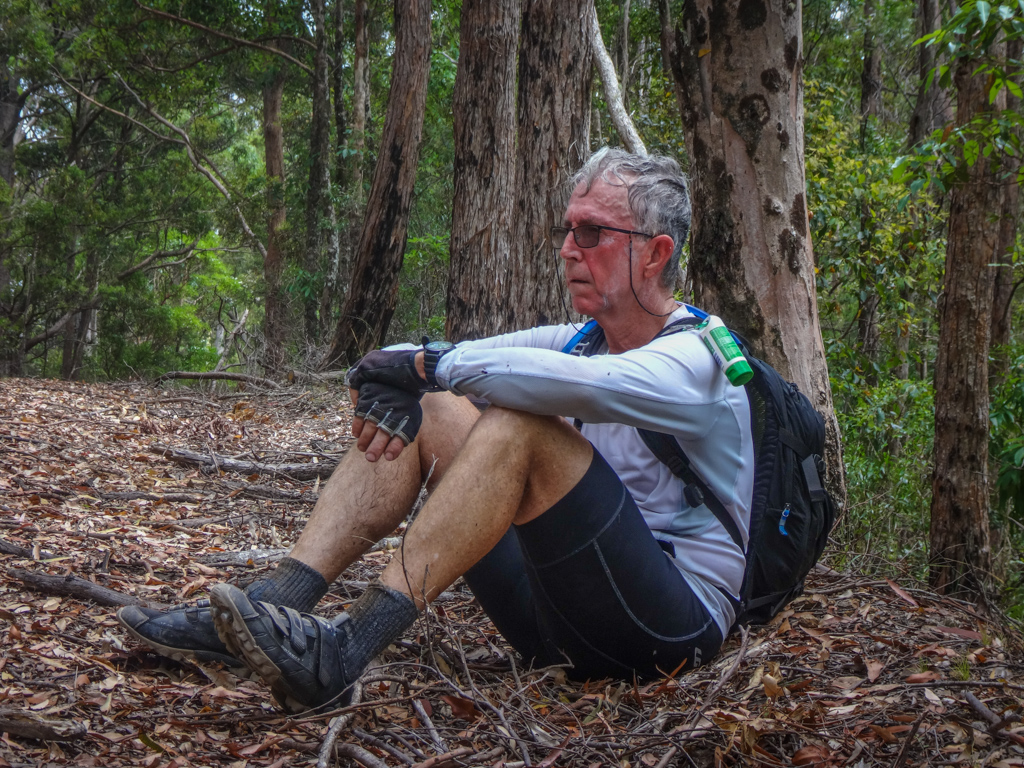 Today’s adventure challenged our endurance as we followed a large hilly loop through the D’Aguilar Range. 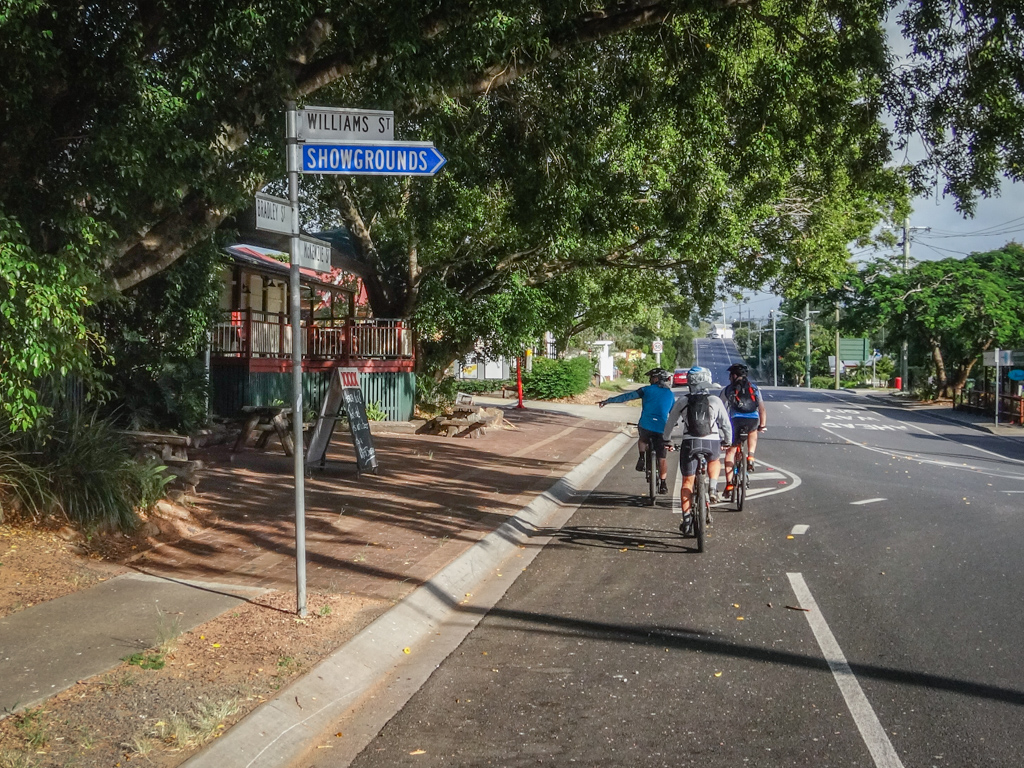 The Dayboro Pub was closed when we rolled past it early on Saturday morning.

If we got back early enough, perhaps we could get lunch there. 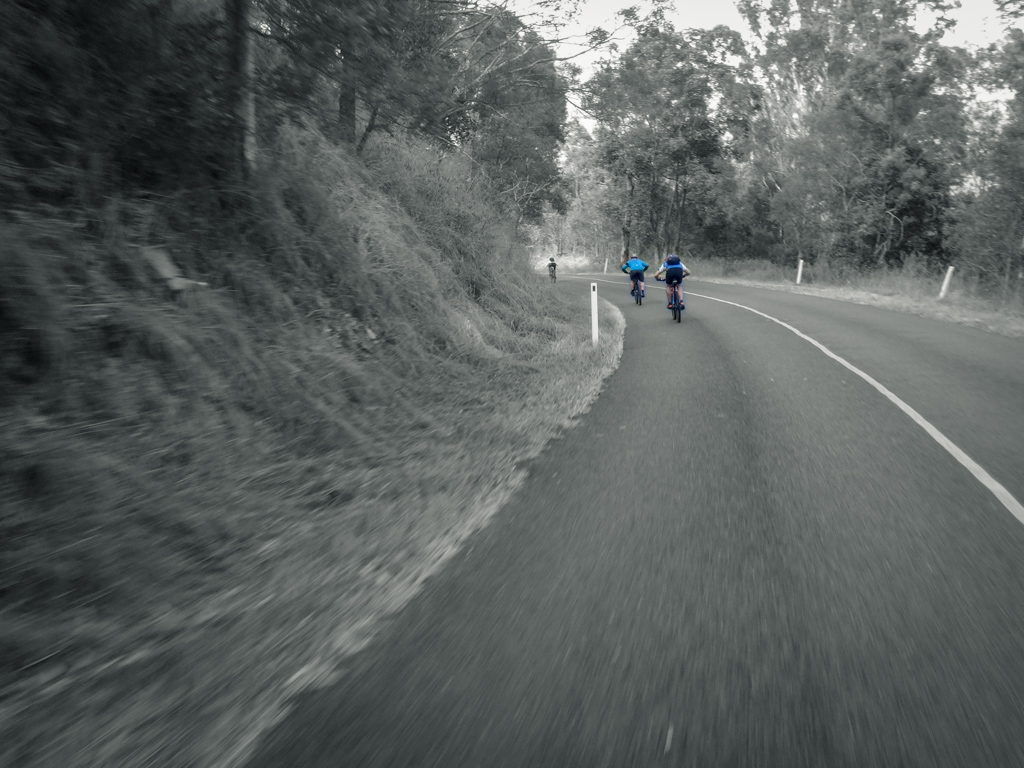 We left town, then rolled down “Cruices Hill” on Laceys Creek Road.

Wind roared in my ears after I released the brakes, tucked in, and waited to see how fast my bike would go.

Seventy kilometres per hour – not bad! 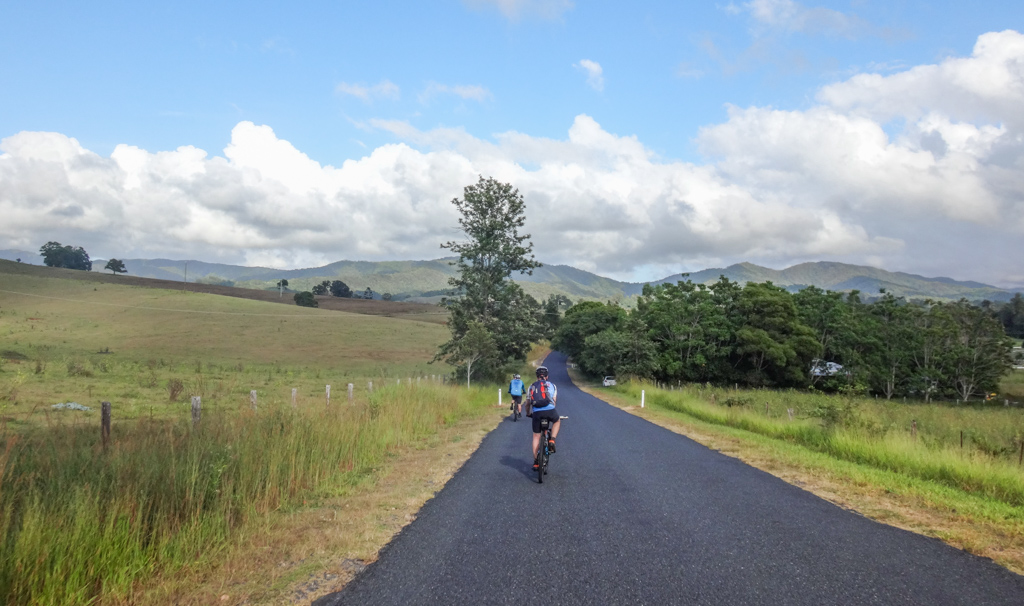 For about half an hour we pedaled over undulating back roads,  making our way towards the foot of the D’Aguilar Range. 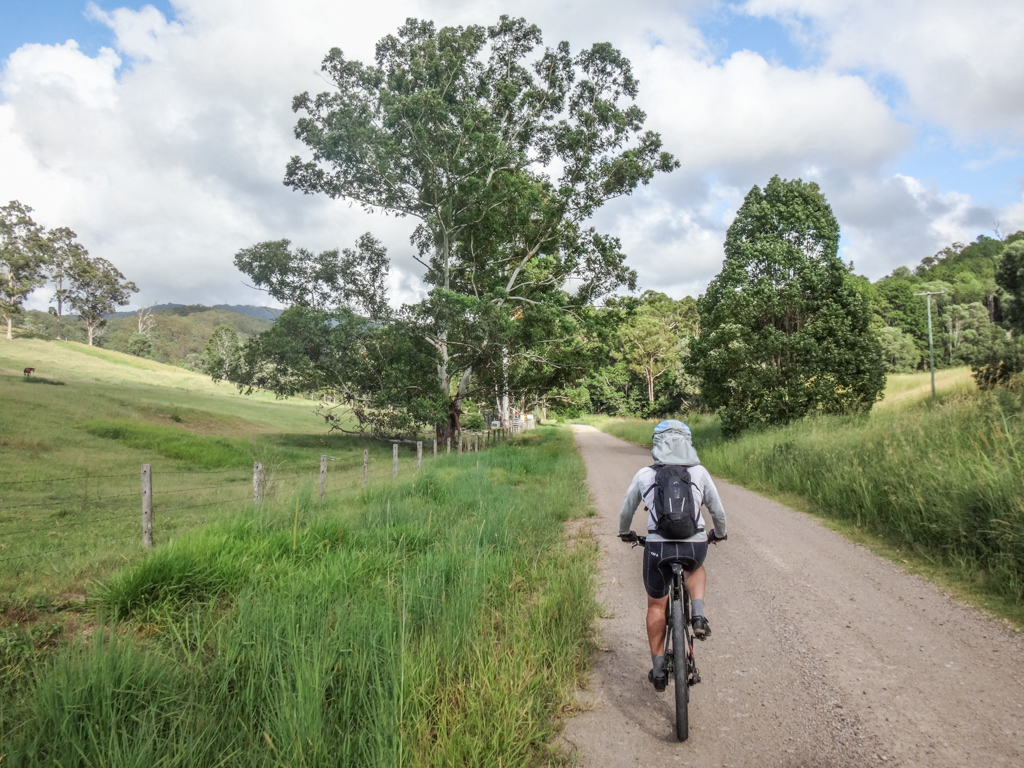 The tarmac ended at the intersection with Wirth Road. 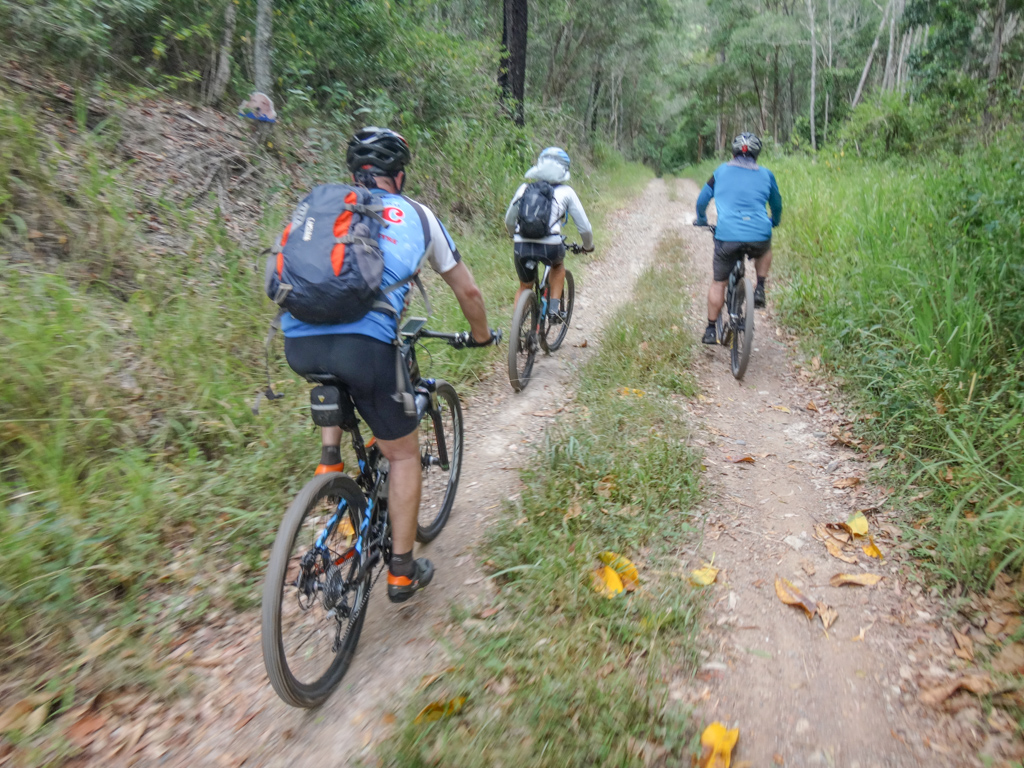 The first major climb of the day started gently. 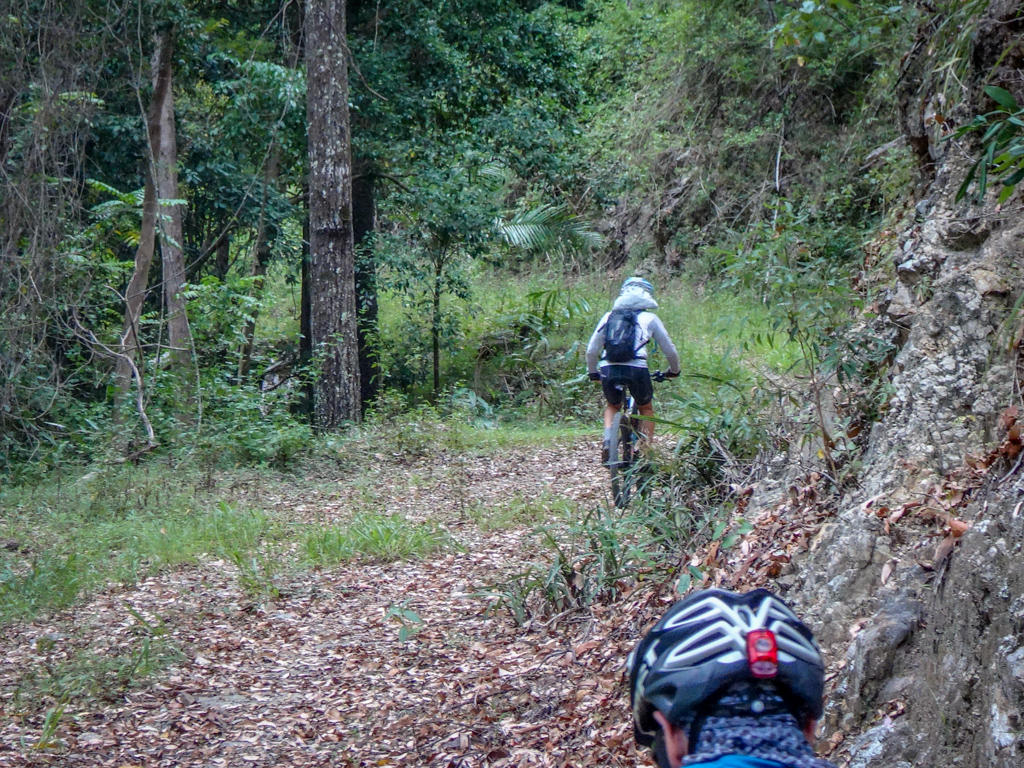 As it grew steeper, Eric and Darb accelerated away from Adam and me.

I settled into the slow steady rhythm of a long climb.

My mind entered the familiar trance of turning pedals.  Strange songs echoed through my head in time to the rotating cranks.  The noise of complaining muscles was drowned out by obscure music from my past. 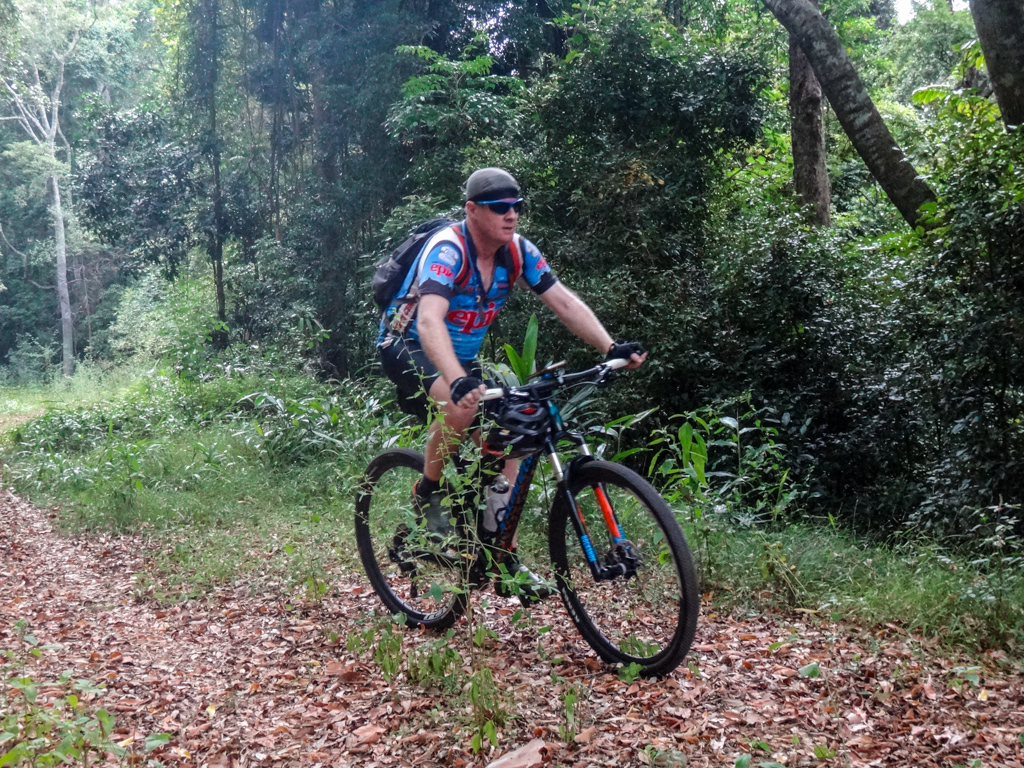 It was hard work in the heat and humidity.

Because we were only going slowly up the hill, Adam and I removed our helmets for a while to help us cool off.

My gloves and jersey were saturated with sweat.

Would I have enough water? 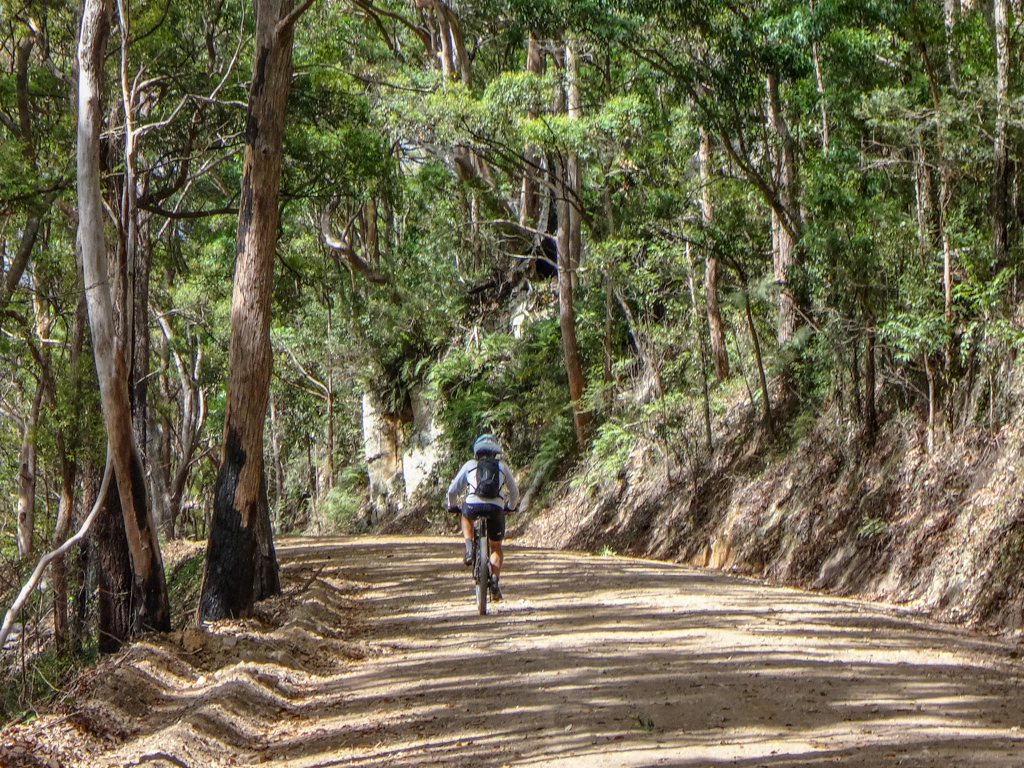 At the intersection with Range Road, we stopped for a few minutes to rest.

“I’m just going to have a cry and a lie down,” I joked to Eric, who had been waiting patiently for me in the shade of a tree. 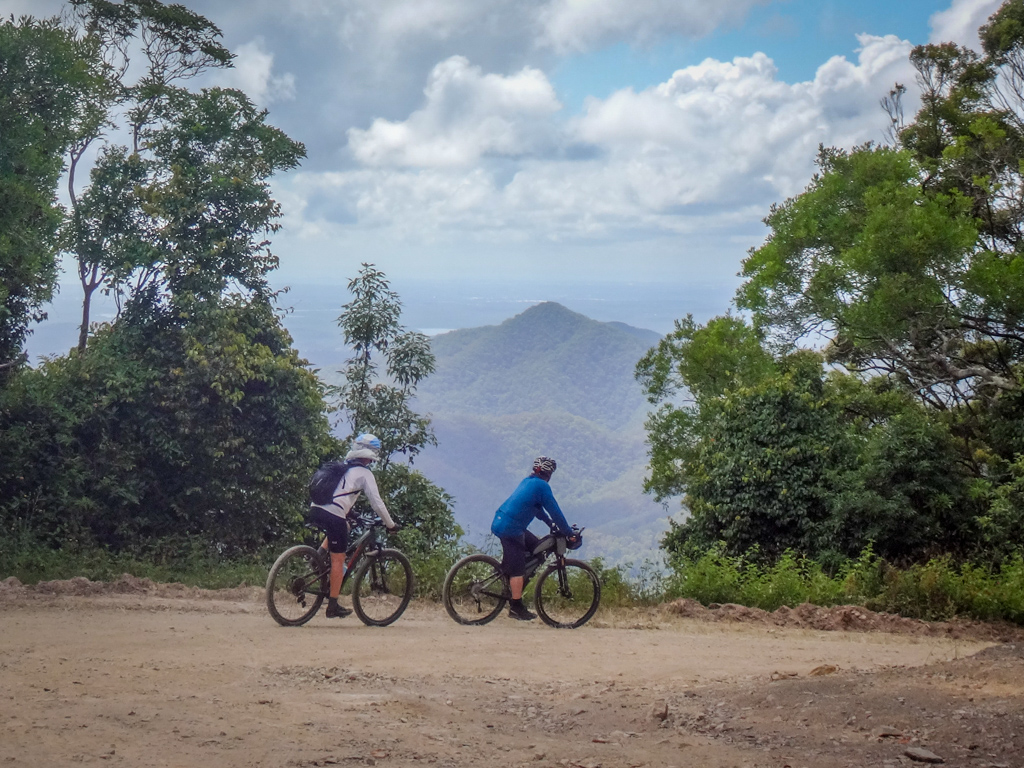 A short while (and a lot more work) later, we arrived at Kluvers Lookout.

Beyond the wrinkled hills below us we could make out Lake Samsonvale, with Moreton Bay on the eastern horizon.

I value the views from this spot because of the hard physical work that precedes each visit. 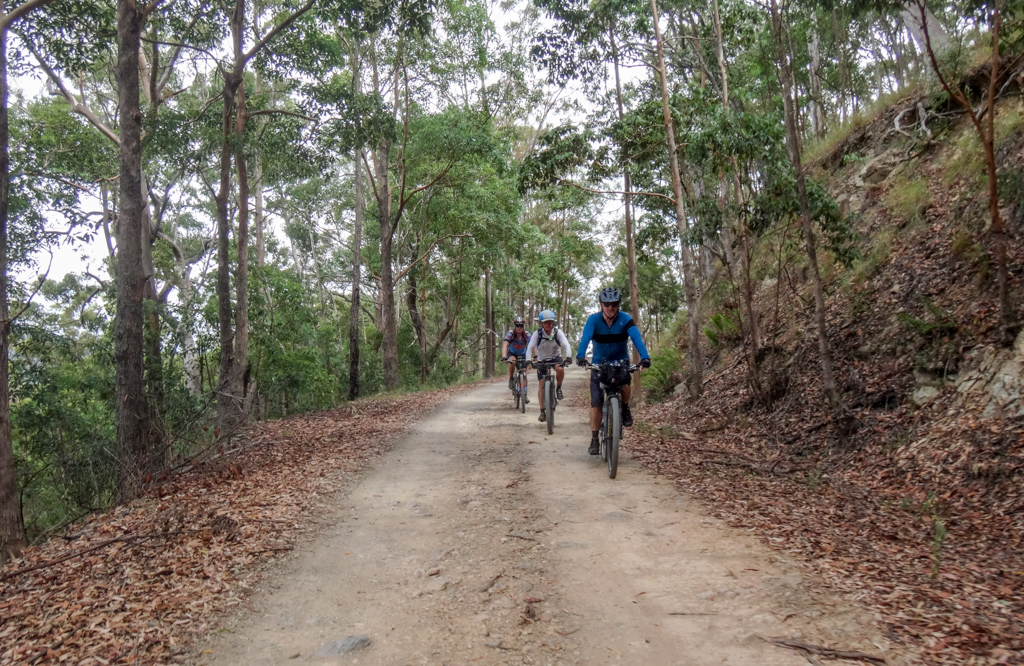 After we had cooled down at the lookout we followed Range Road south, up and down several hills. 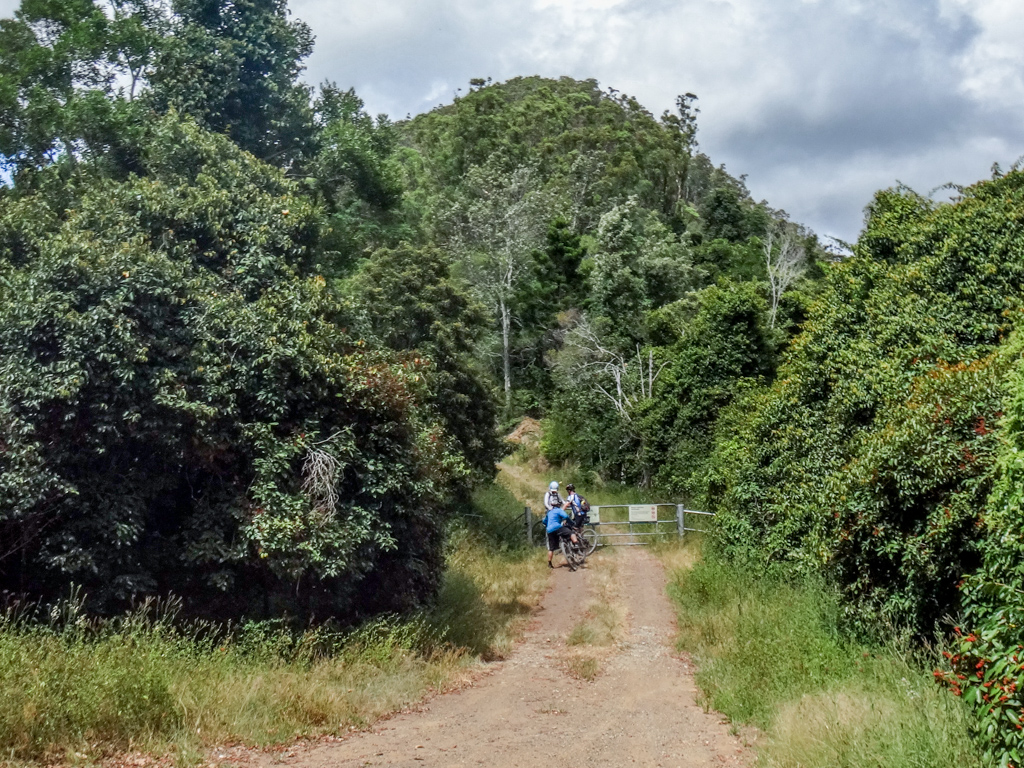 The next major climb started at the foot of “Bulls Knob”, a strangely named mountain which looms over the track.

Most times at this intersection we turn left and enjoy a long roll down Laceys Creek Road.  But today we were going further, and toiling longer.  The road led upwards, and we followed. 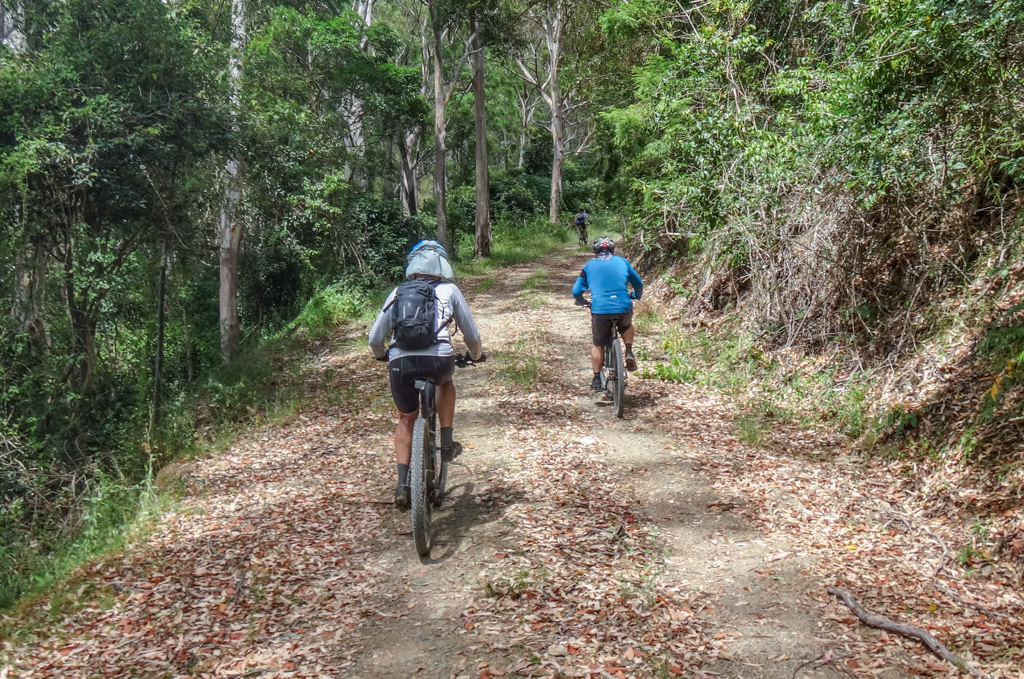 Once again, Eric and Darb accelerated away, and the odd songs returned from the recesses of my mind.

We climbed a few big hills, and stopped for a rest at the top of each one. 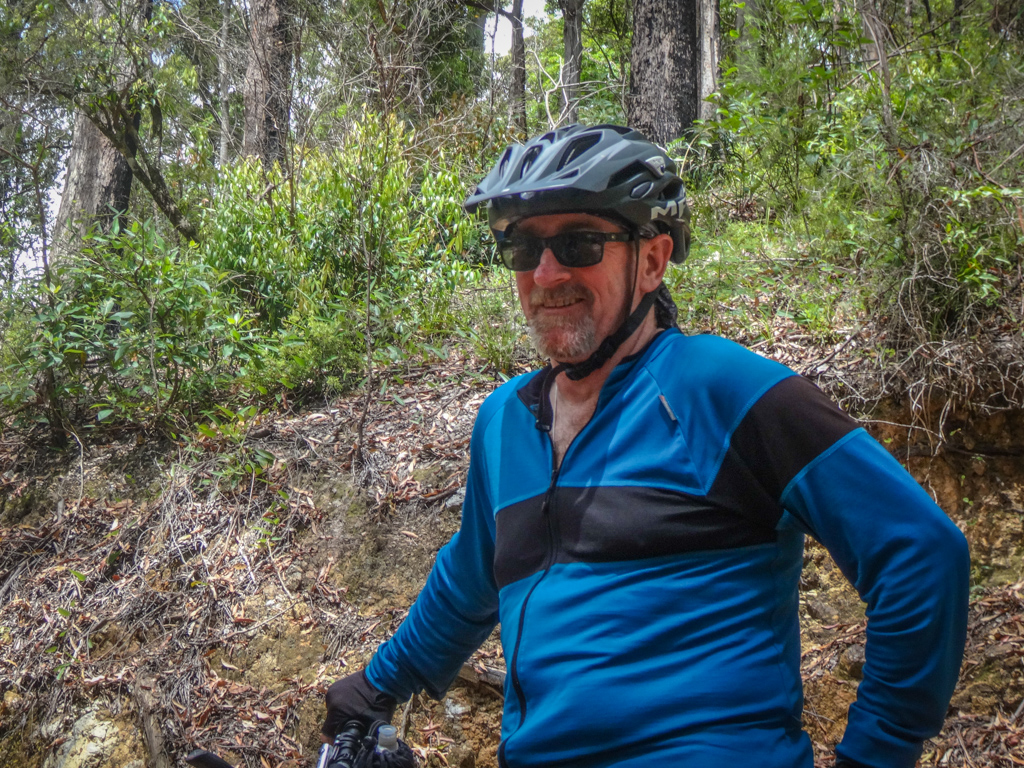 “How you feeling, Darb?”

A man of few words.  I reckon he could go all day if he really had to.

Bellbirds tinkled from places unseen in the dense forest.  Leaves rustled in the breeze.

I felt uncomfortable but happy.  And lucky.  This place was beautiful! 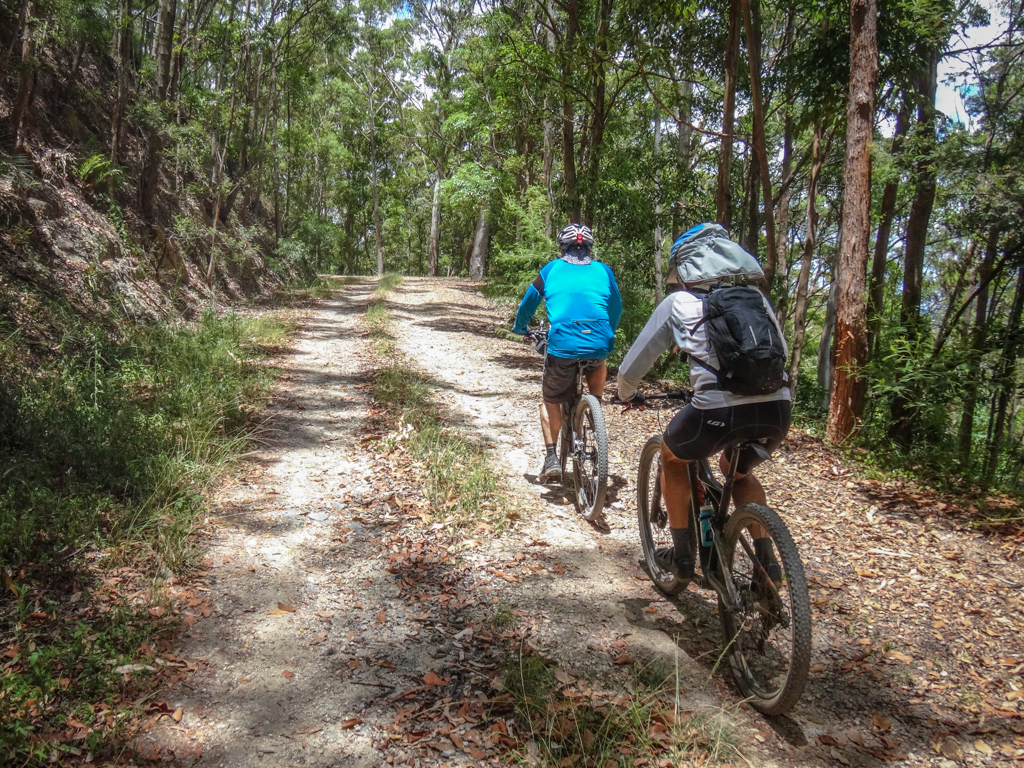 We could hear the buzz of traffic on Northbrook Parkway a couple of kilometres ahead.

Slowly we mashed the pedals up the last climb to the top gate. 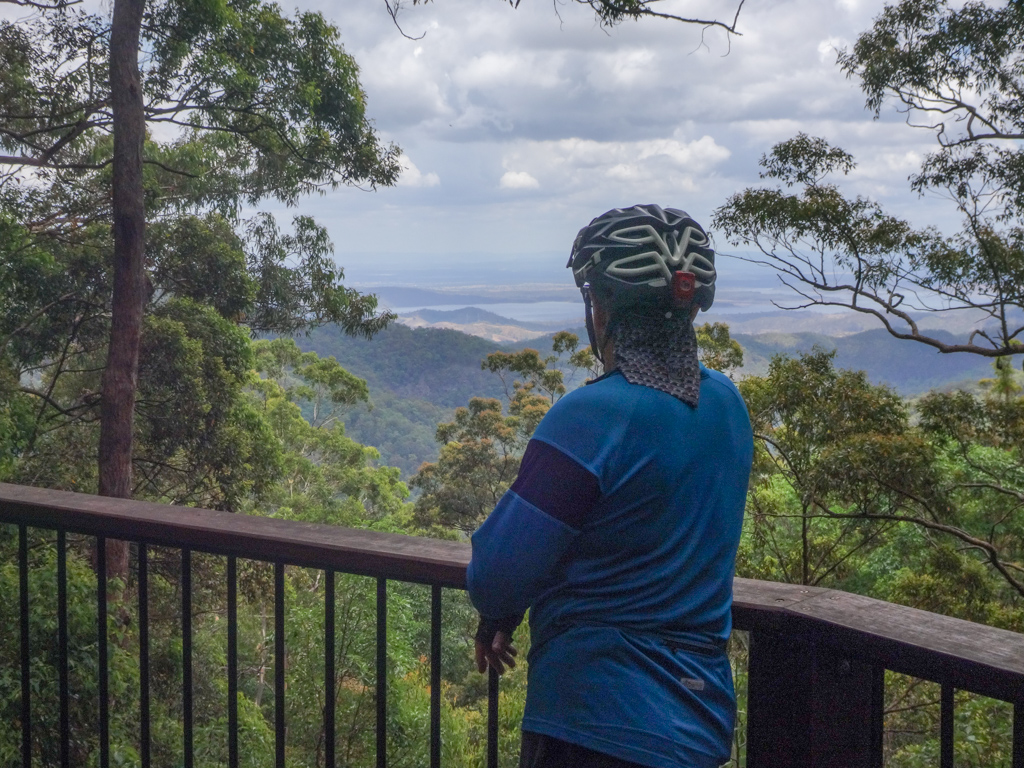 Lake Wivenhoe lay below us.  In the distance, the Great Dividing Range marked a faint line between heaven and earth.

There were water tanks at the lookout, but no taps.  We couldn’t refill here.

A friendly driver offered us a few litres of bottled water.  We eagerly accepted, and topped up. 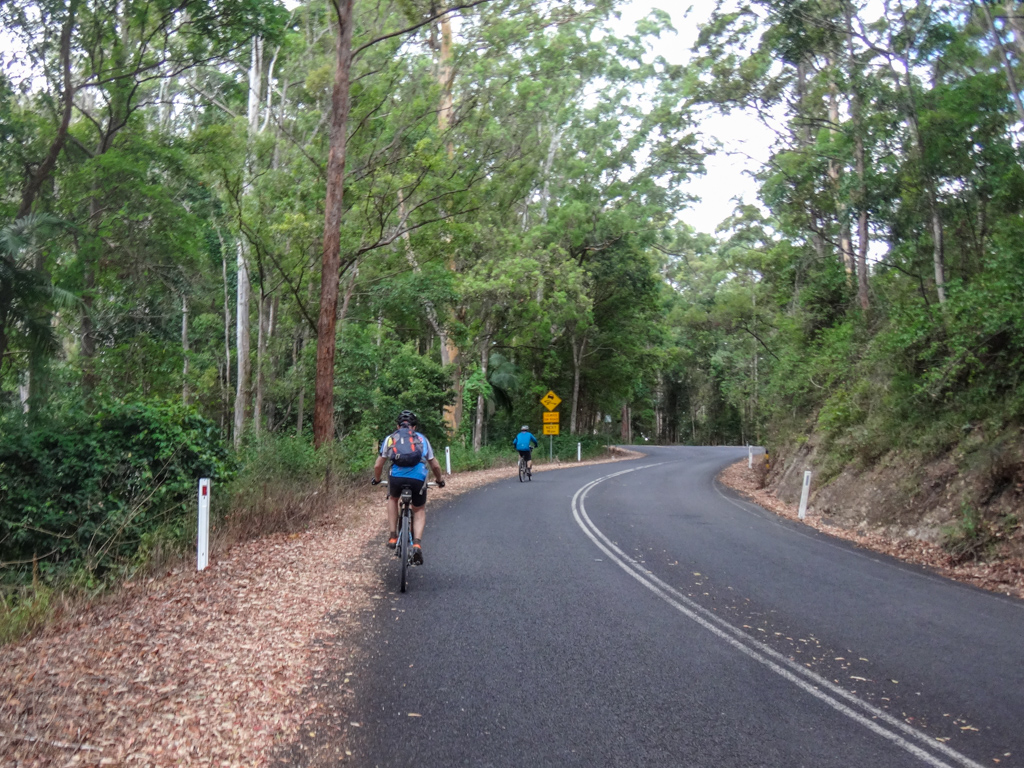 We left the lookout and continued up Northbrook Parkway.

It was steep, but the smooth road made the climb much easier. 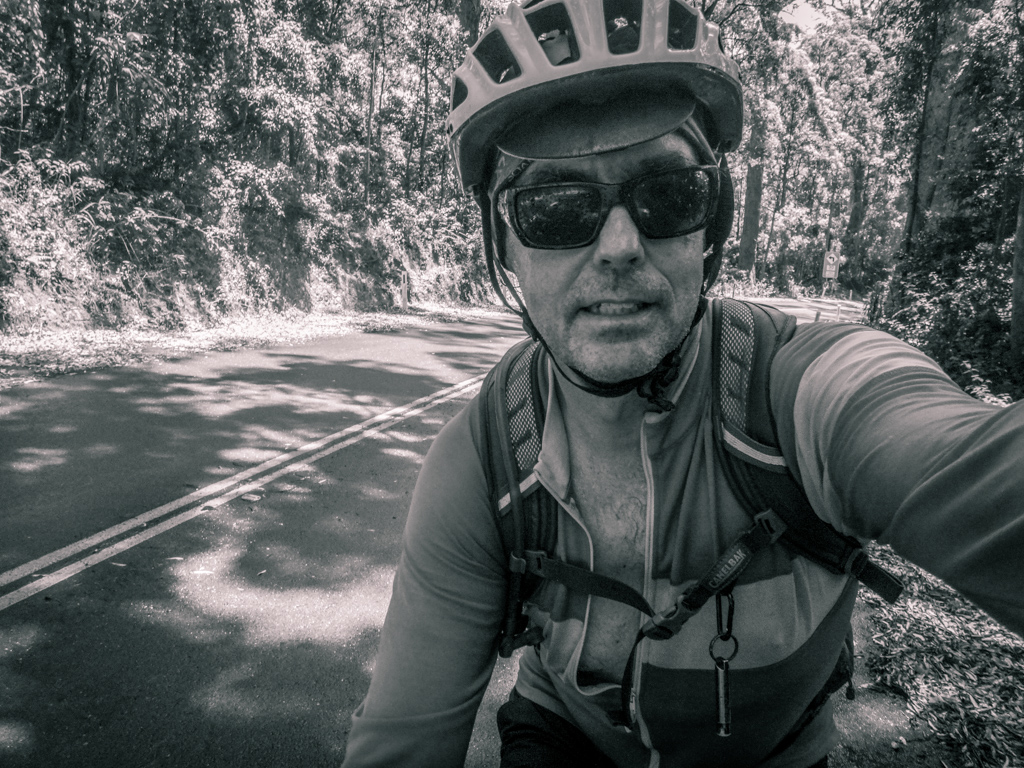 It rained suddenly.  Heavily.  Then as soon as it started, the rain stopped, and the sun emerged.

I fumbled with a rain jacket then realized how stupid it was to try to second guess the weather.  I was soaked with sweat anyway.  Why try to keep “dry”?

I lagged behind the others again.

I found them waiting patiently for me at the intersection with the Lepidozamia Track. 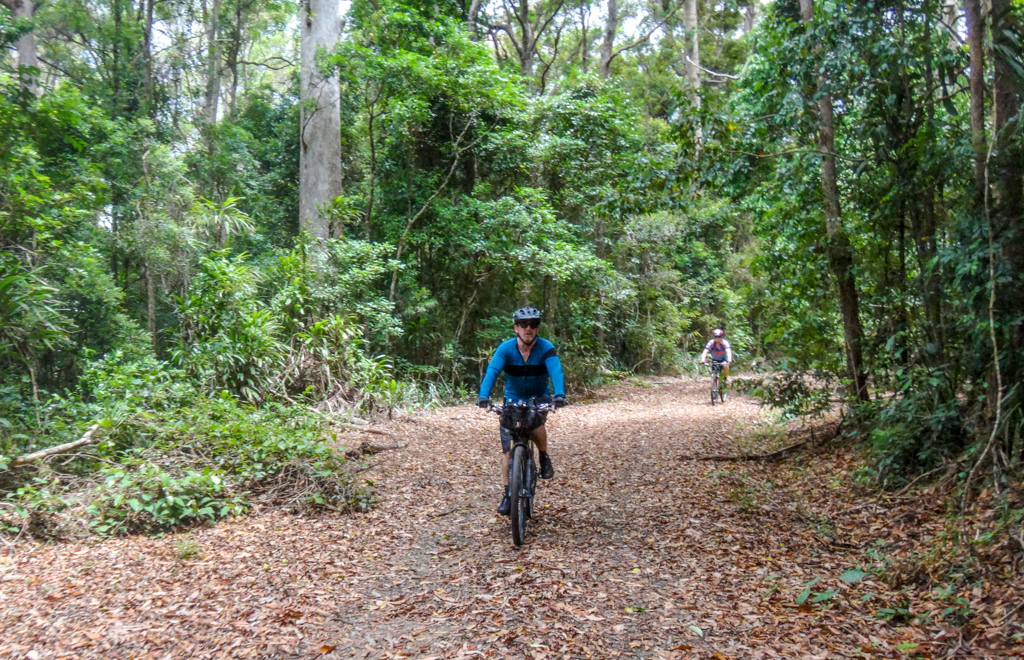 I love this track – a long steep descent through thick forest. 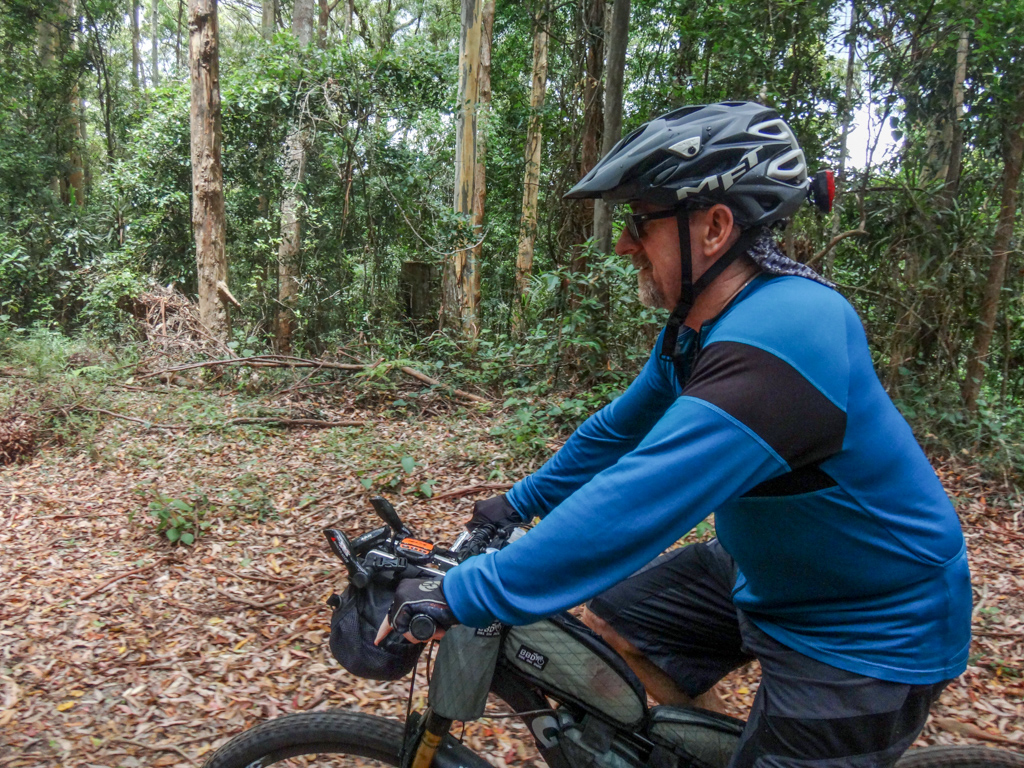 “Hey Darb, do you remember we did our first ride together down this trail?”

I looked right as I talked, and almost crashed into a tree stump.

“Whoops.  If I’m not careful this might be our last ride together too!” 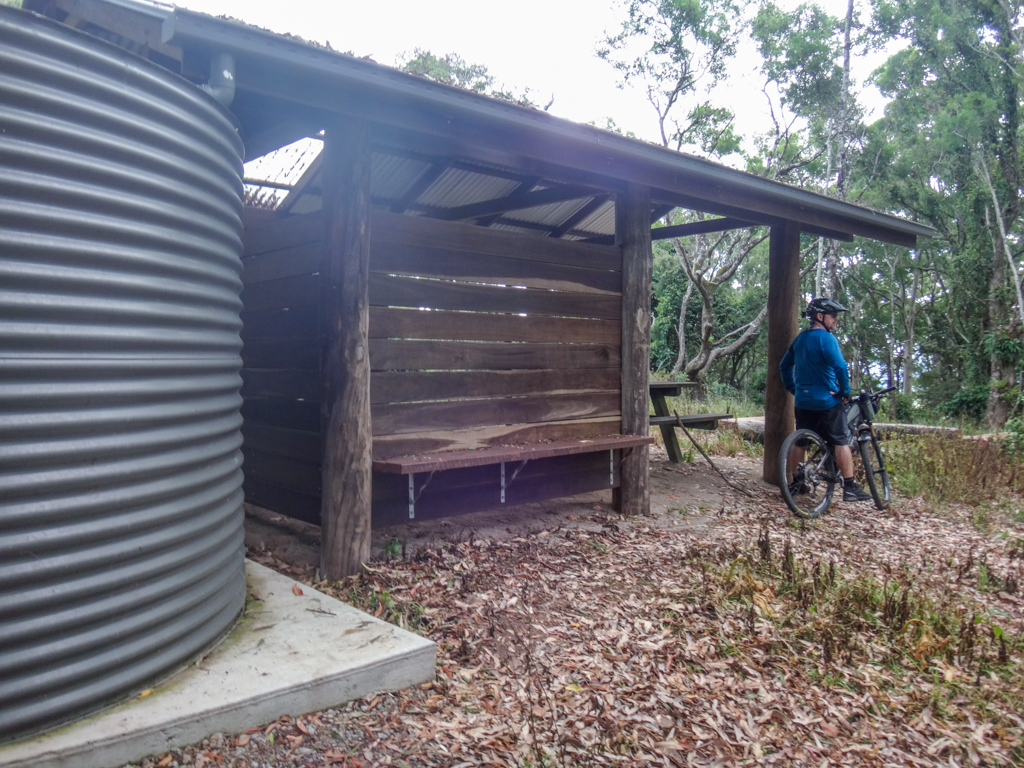 We were excited to find a new shelter a few kilometres along the track.

The two large tanks had taps.  If we needed to we could refill with water here.

This knowledge would come in handy when planning future rides.

As we started our descent we enjoyed more impressive views out towards Moreton Bay. 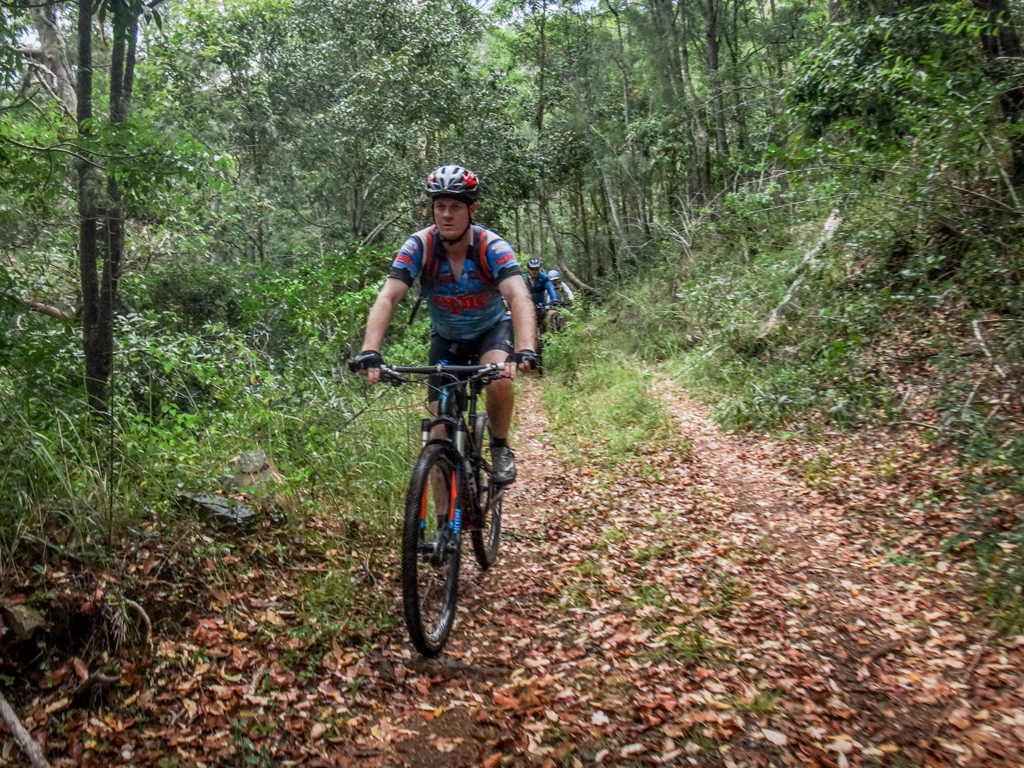 The descent started gently, and slowly dropped away more steeply.

My glasses were fogged up from the rain.  I couldn’t see properly.  My front wheel got stuck in a rut, and I crashed.

Adam kindly helped me get back up.

I had hoped the descent would be a time to relax after all the hard work we had invested.  But it wasn’t – this was a challenging track to ride down.  I needed to concentrate.

We eventually reached the bottom and rolled through Kobble Creek. 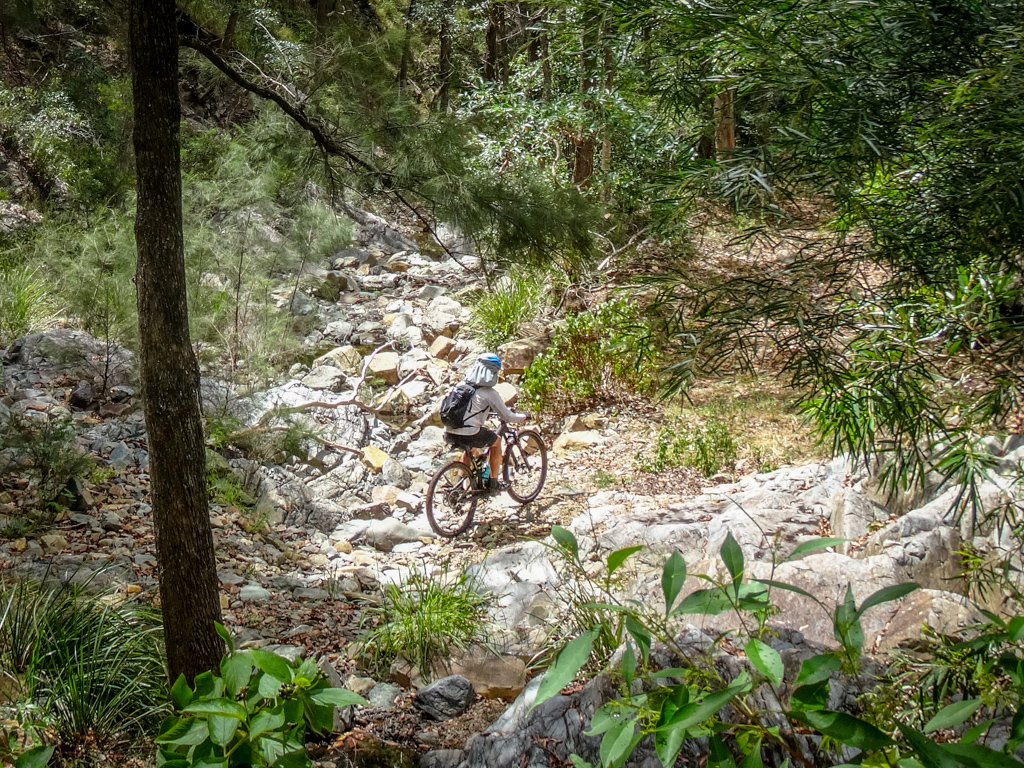 We crossed the creek bed a few times.

It was dry.  The wet season is still a few weeks away. 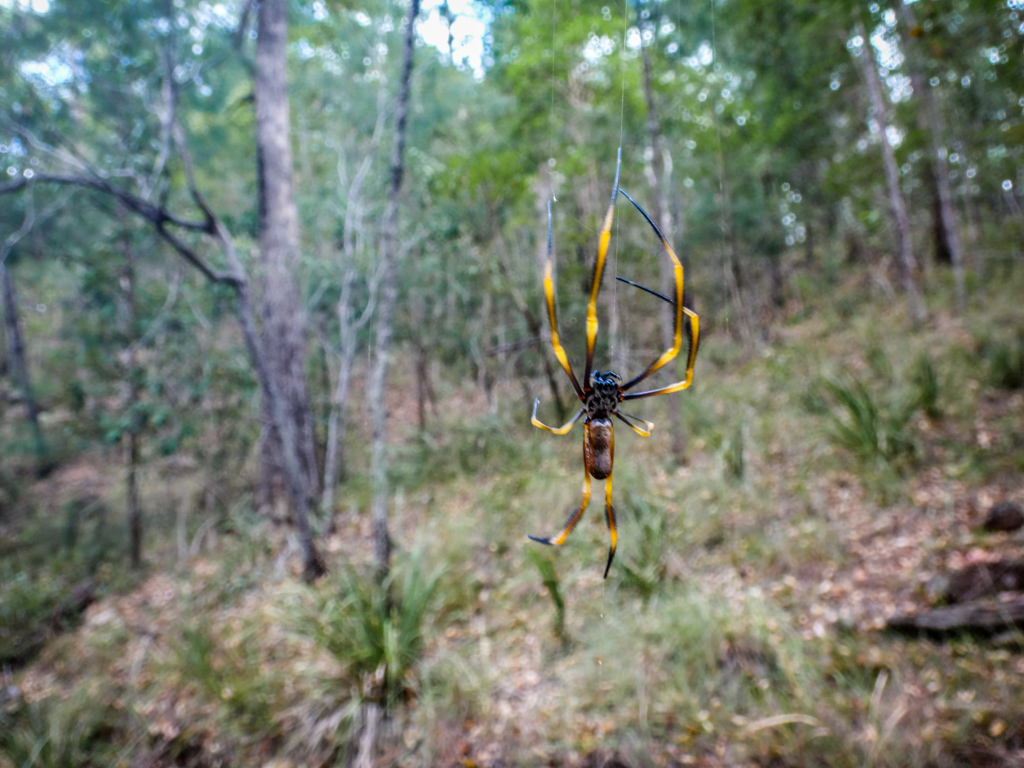 Eric rode at the front and broke through most of the spider webs.  I didn’t have to worry about many of them.

This bright golden-orb spider was eager to get out of my way. 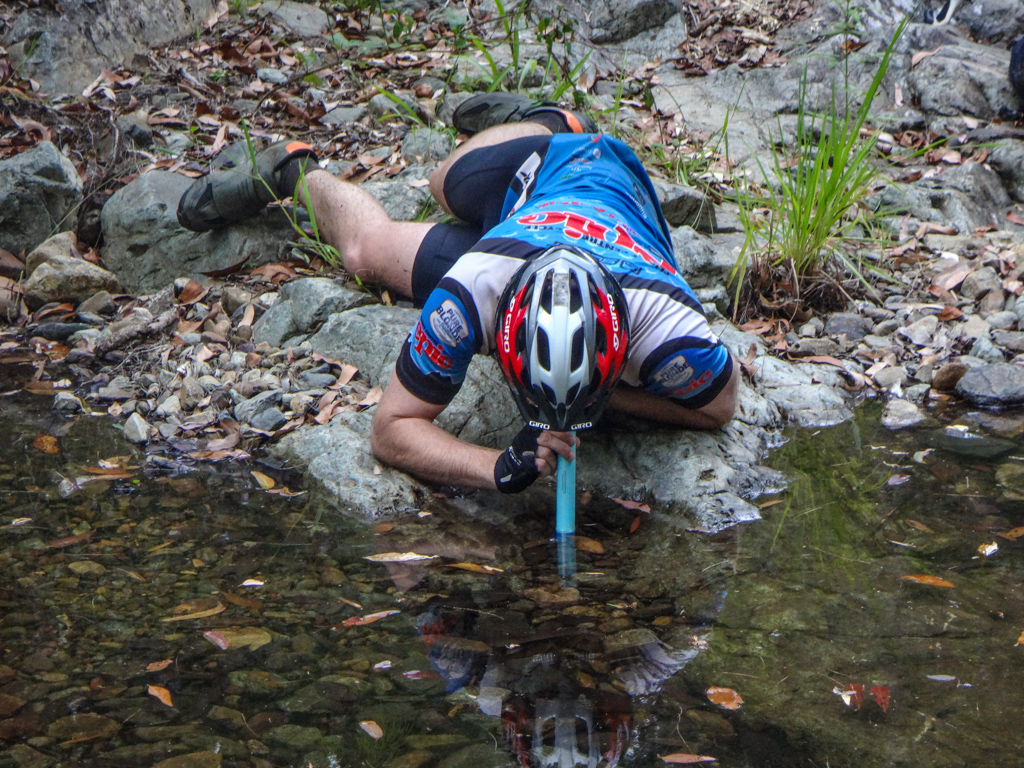 A few of us carry this clever little devices in case of emergencies.

They filter all the nasty things and let you drink clean bug-free water.

He didn’t die, and seemed happy, so it must have worked ok.

The track followed Kobble Creek out of the valley, beside rocky gorges and over several causeways. 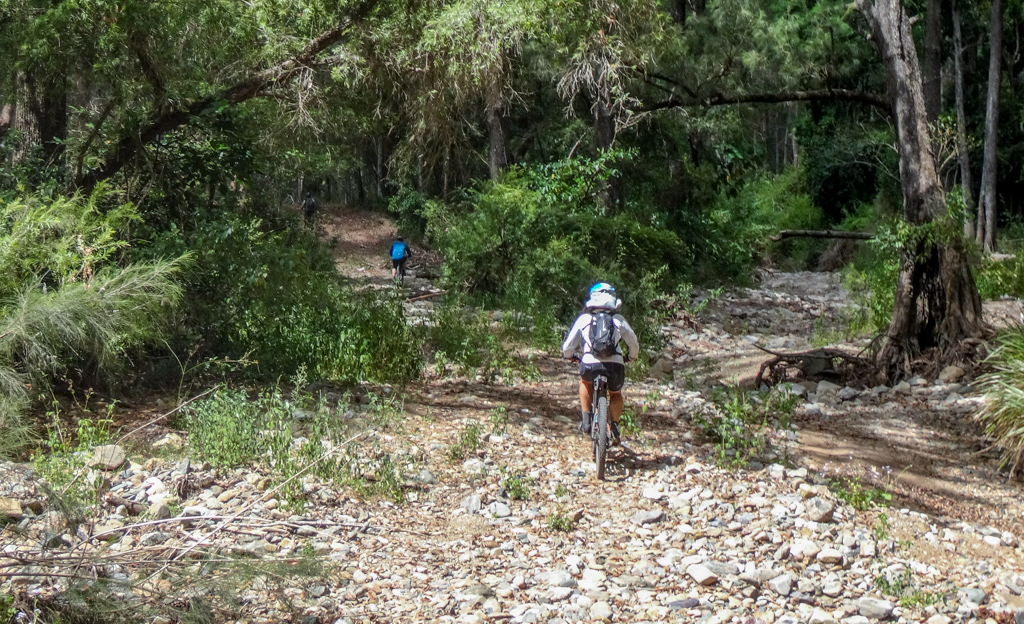 It’s challenging to ride a bike over rocky creek crossings.  I was glad I had dual suspension.

Adam was looking at it intently.

“I rode up there with Paul one afternoon,” I boasted.

“It was stupidly steep.  That’s why they called it ‘Chicken Break'”

It wasn’t till afterwards that I realized Adam wasn’t looking at the name on the sign.  He was fascinated by a cicada’s exoskeleton.

The deafening ring of the cicada chorus often fills the Aussie bush.  It can feel overwhelming at times, but when you’re used to it, it’s an exciting sound. 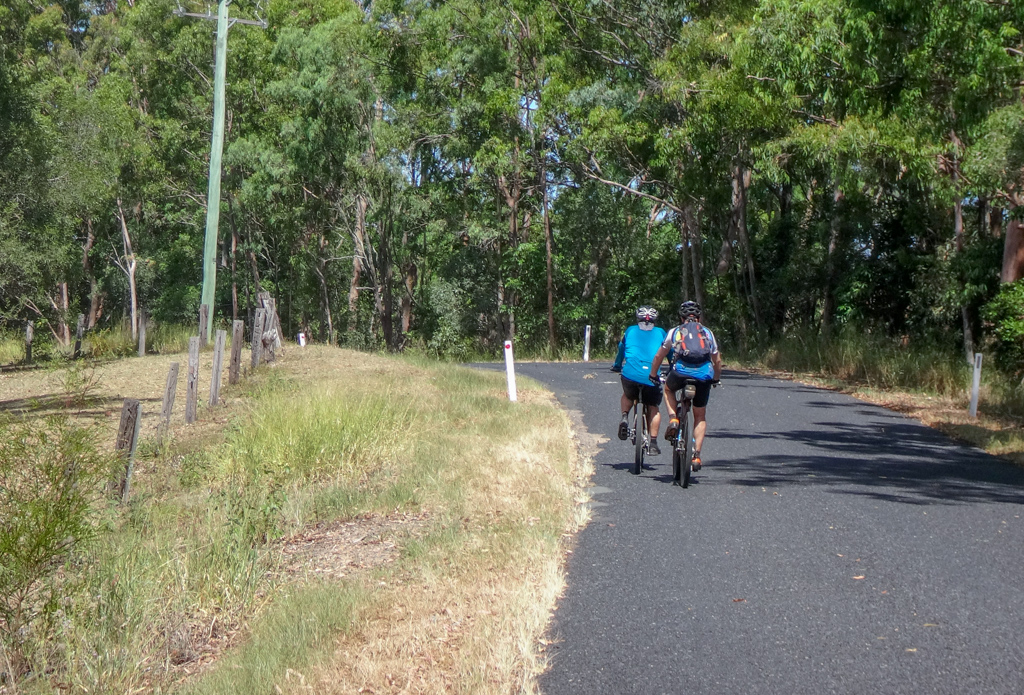 After bouncing along the creek bed for a few kilometers, we finally emerged at a paved road and followed it out of Kobble Creek towards Dayboro. 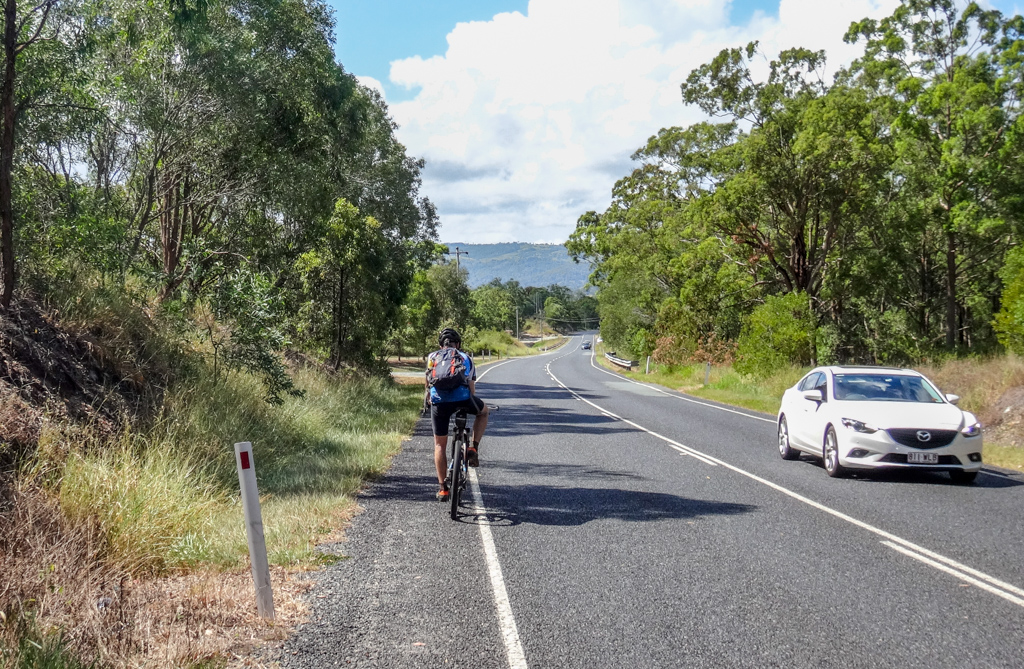 As soon as we reached the main road, I got a flat tyre.

It was a slow leak.  I felt lazy and decided to inflate it, and hope the pressure would last until we got back to Dayboro.

It didn’t.  Adam helped me pump it up a few times.

We rode about 65 km in eight hours.

During that time we climbed about 1,800 metres in vertical ascent, and I burned just over 3,800 kcal.

This was a very tough ride, in difficult conditions.

Not many rides are tougher than this – especially with temperatures in the low 30’s and humidity above 90%.

In case you wondered, the Dayboro pub was open when we arrived back, but we were too late for lunch.

If you’re going to try this ride, do it in winter, and take some friends you can rely on.

Thanks Eric, Darb and Adam for the great day out.

Let’s do something a little easier next time!