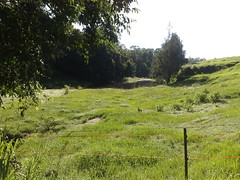 On my cycle back from Samford this morning, I thought I’d take a detour over Drapers Crossing that crosses the South Pine River through some idyllic dairy farmland.

The rickety bridge looks like it’s been there for ages, but the actual crossing has been in use much longer.

At 28 years of age, Jacob Draper an English migrant, built a slab cottage near here in 1869.

(Source “Pioneering The Pine. A Short History of the Pine Rivers Shire” by Leith Barter) 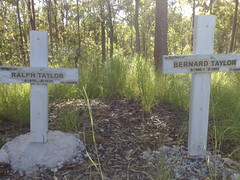 A sad reminder of the heartbreak faced by pioneering families in the district in the 1870’s. Bernard died aged 7 months. A decade later, his brother Ralph, died aged 12 months.

The brothers must have been one of the earliest burials in the Bunya Cemetery, which was established in 1873.