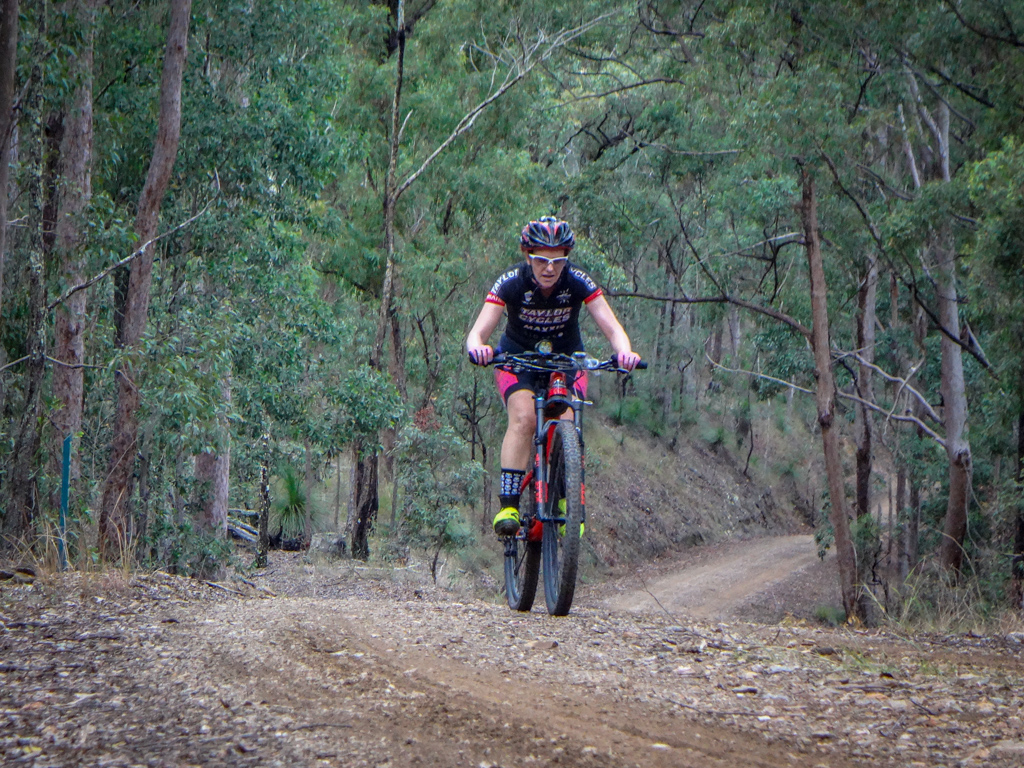 “Everesting” is the act of riding your bike up and down the same hill many times until the cumulative elevation gain reaches 8,848 metres – the height of Mount Everest.

Rebecca attempted this challenging feat by riding up and down Centre Road, in D’Aguilar National Park, fifty-seven times in less than twenty-four hours. 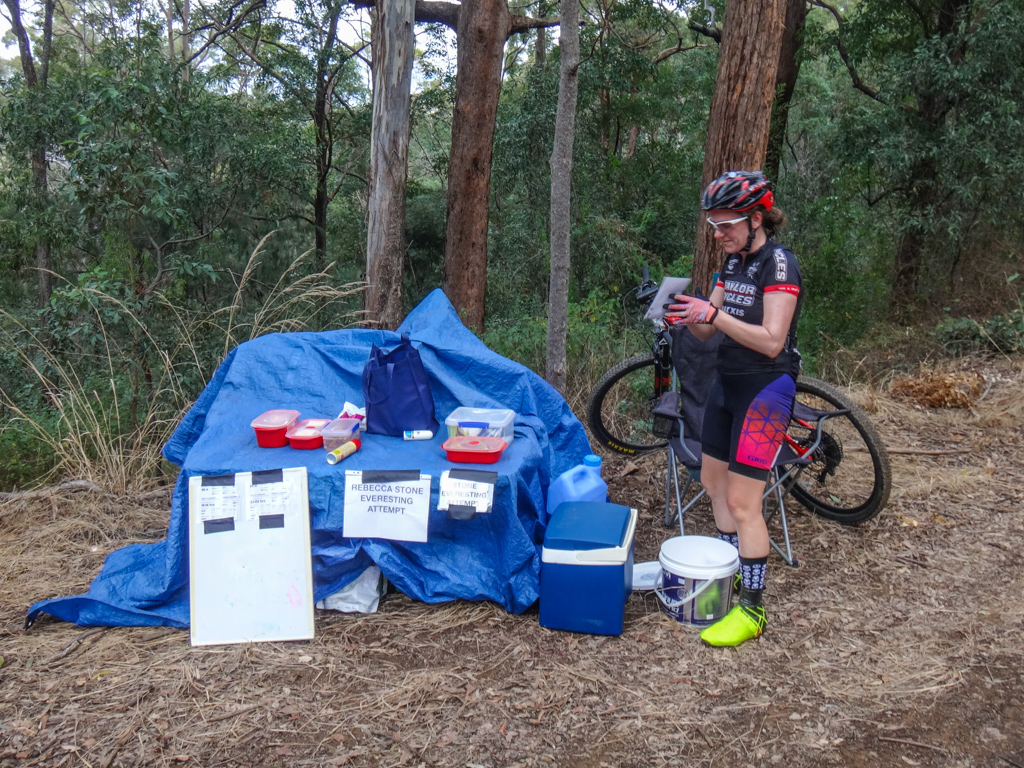 She established a “Base Camp” at one end of the 1.5 kilometre hill, stocked it up with snacks, water and inspirational quotes, then started pedaling.

We’ve ridden it on many occasions in the past.

I love riding down it.  I dislike riding up it. 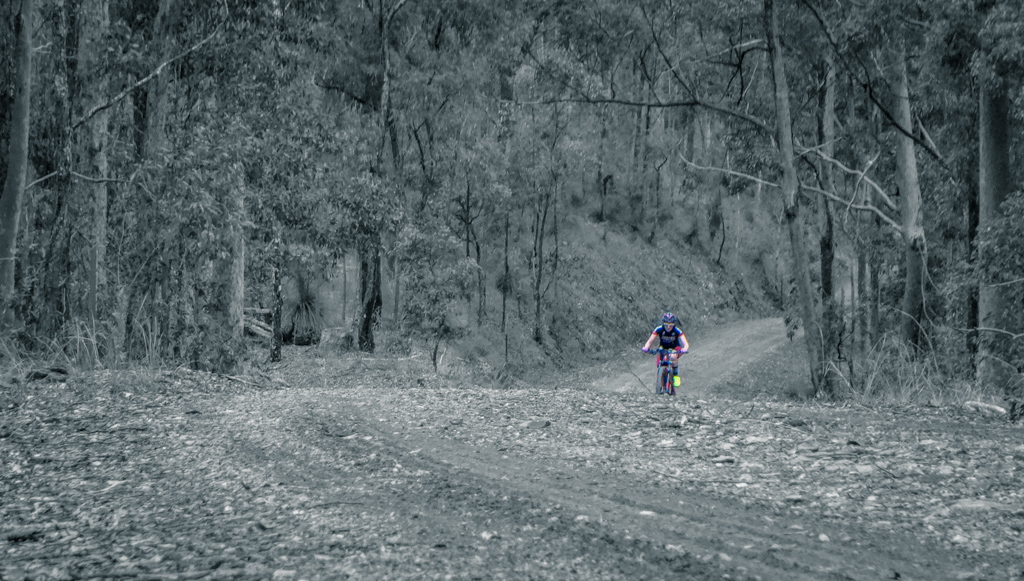 I caught up with Rebecca after she had been riding a couple of hours with Russel.

I waited for her to reach me, then tried to keep up with her while she climbed the hill… 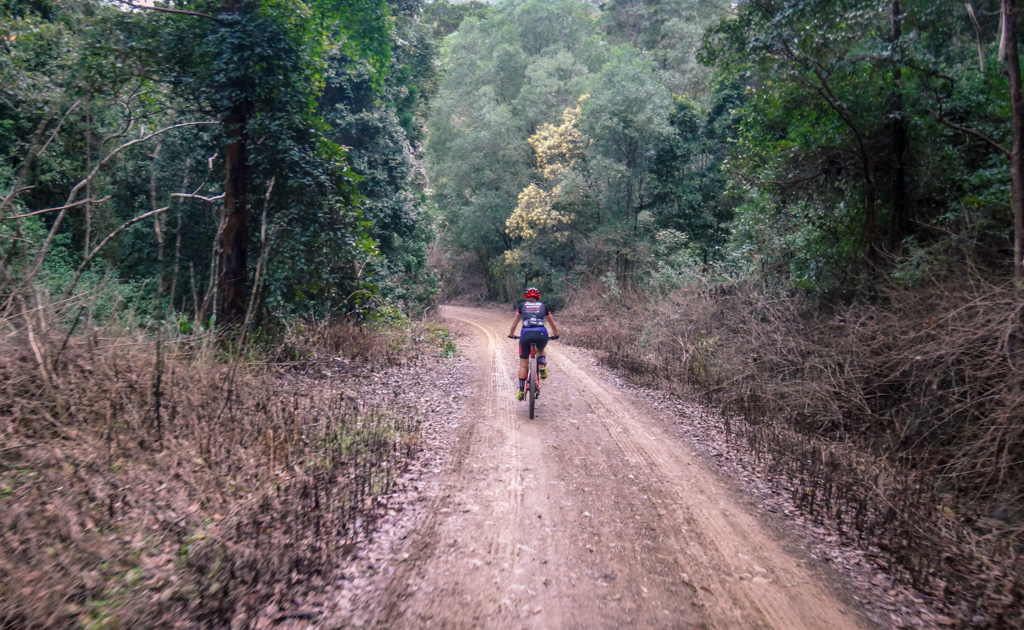 …then rolled back down… 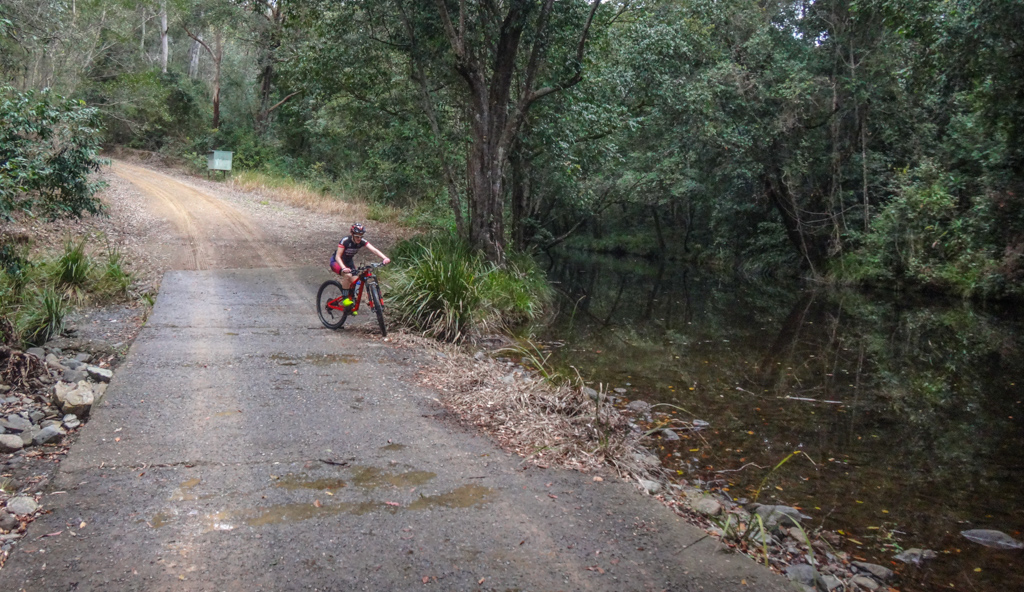 …then turned around at the creek, and started climbing again. 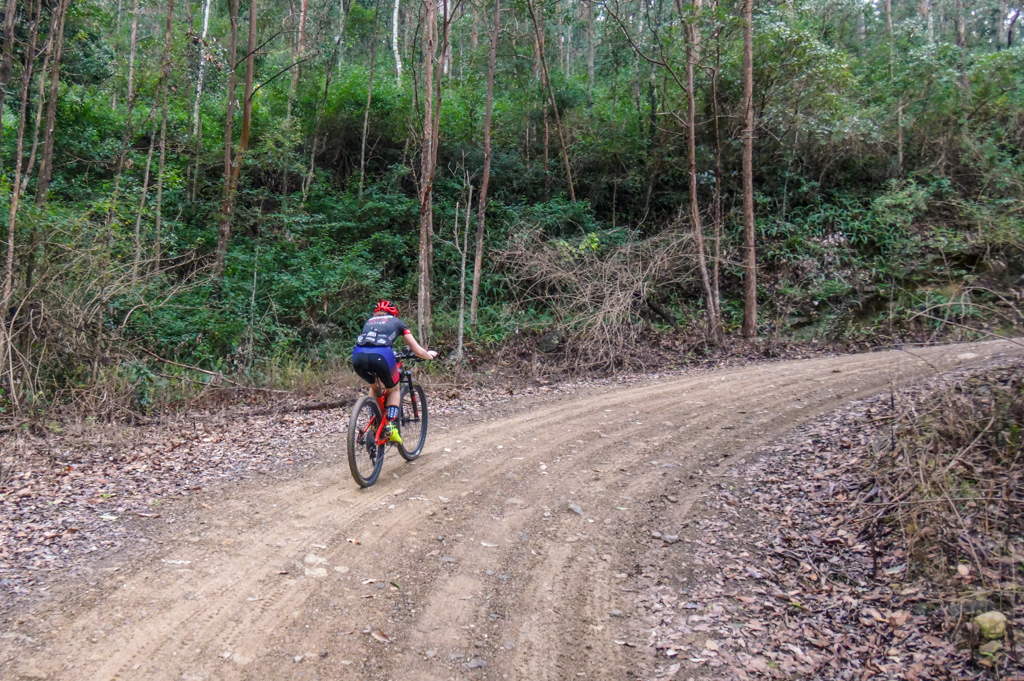 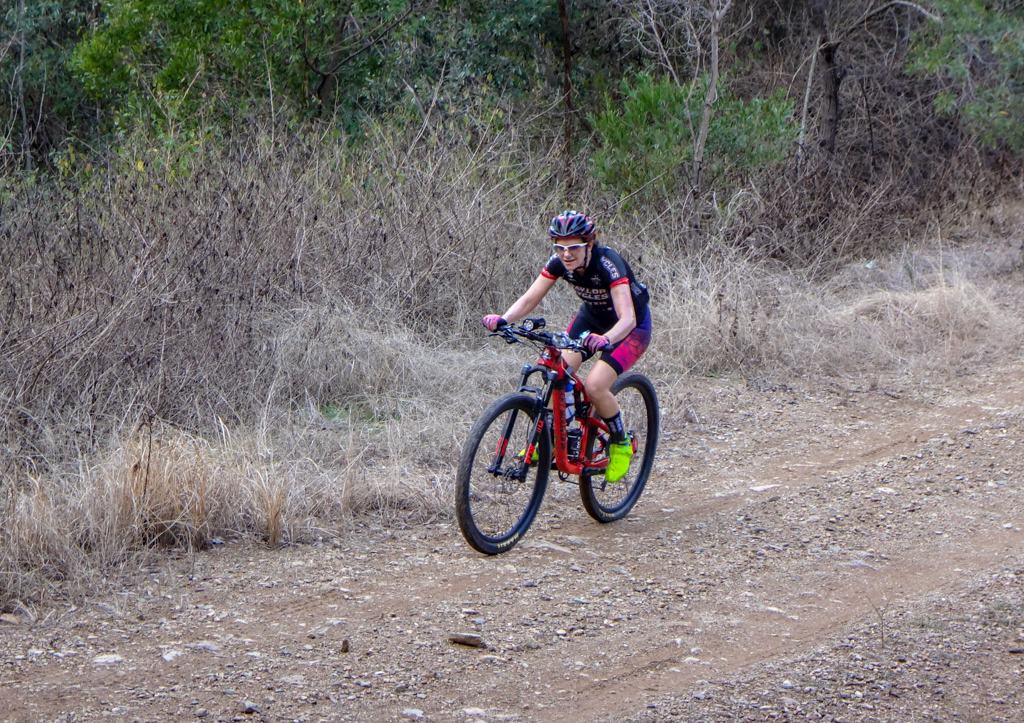 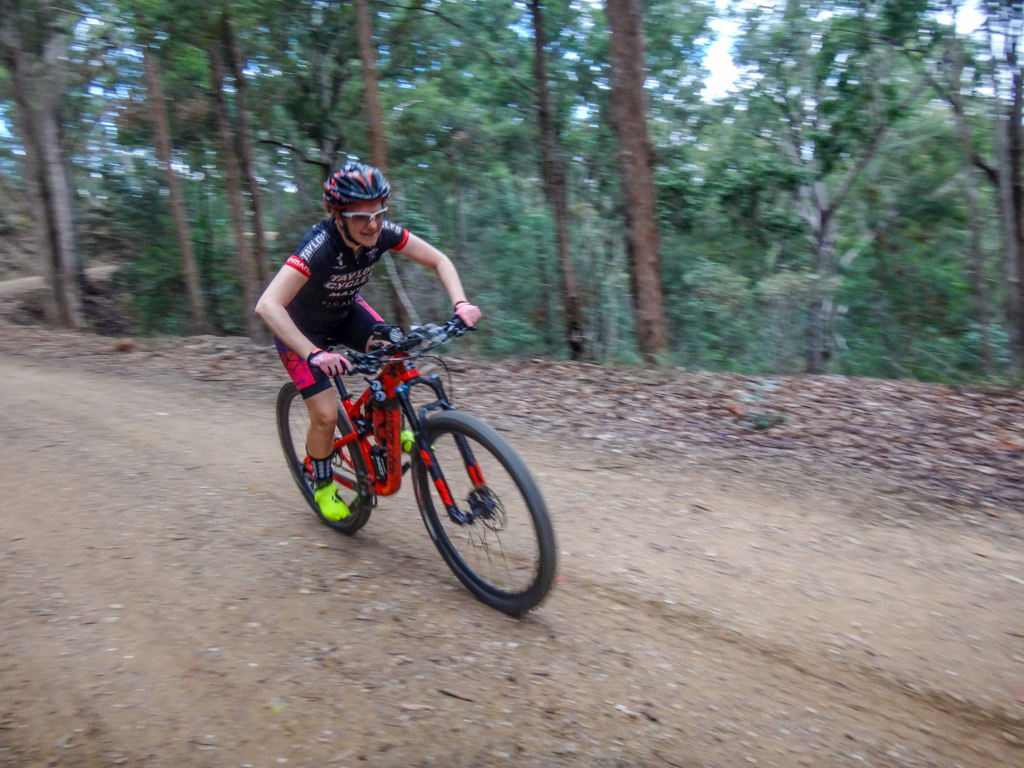 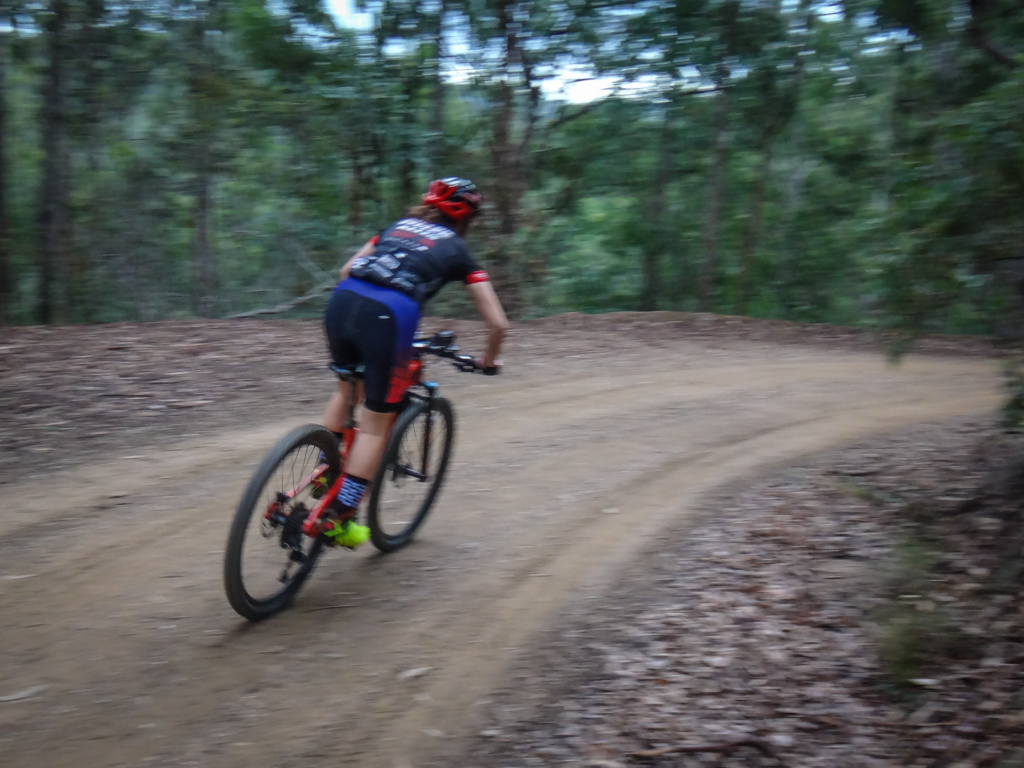 But the most difficult part is the mental challenge.  You’re doing the same strenuous thing, hour after hour, in a big lonely forest.

I did a couple of laps with Rebecca, and when I found it too difficult to keep up with her, I waited beside the track and cheered her on. 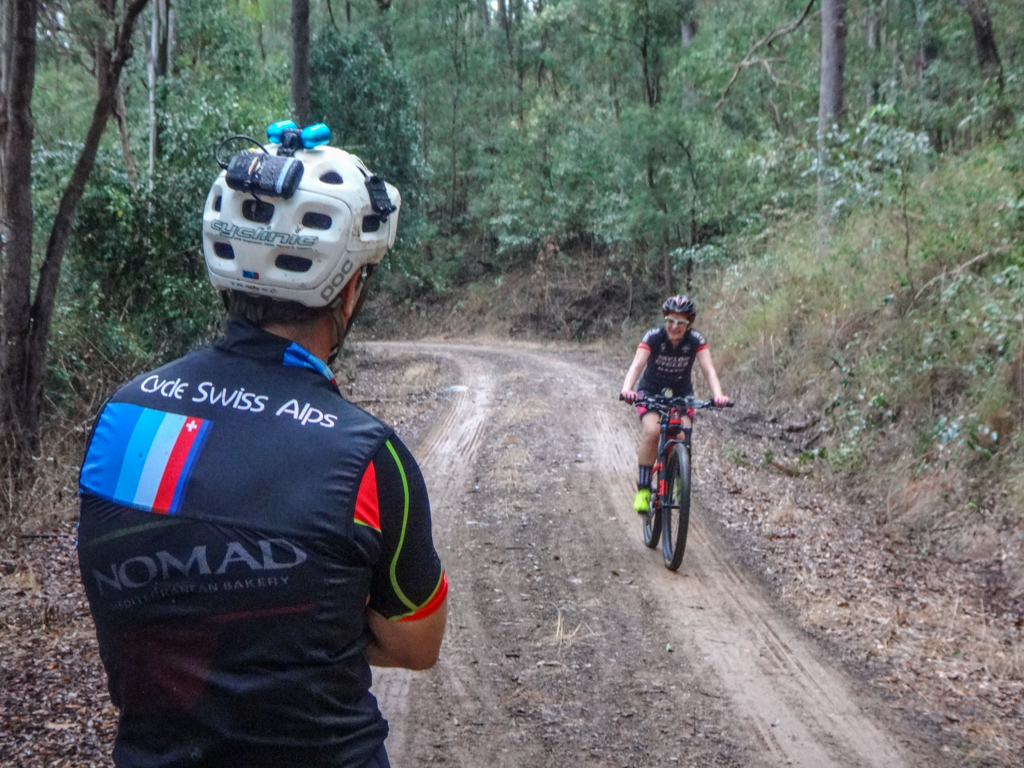 Peter Winfield turned up a little later to offer his support.

He’s one of the strongest riders I know, and rode with Rebecca for a grueling thirteen laps of the hill.  That’s about thirty-eight kilometres with about two thousand metres of elevation.

While they rode, the sun set, the clouds rolled in, and darkness inundated the forest.

Suzanne and her daughters arrived, pitched a tent, and offered some cheerful encouragement as Rebecca disappeared alone into the night. 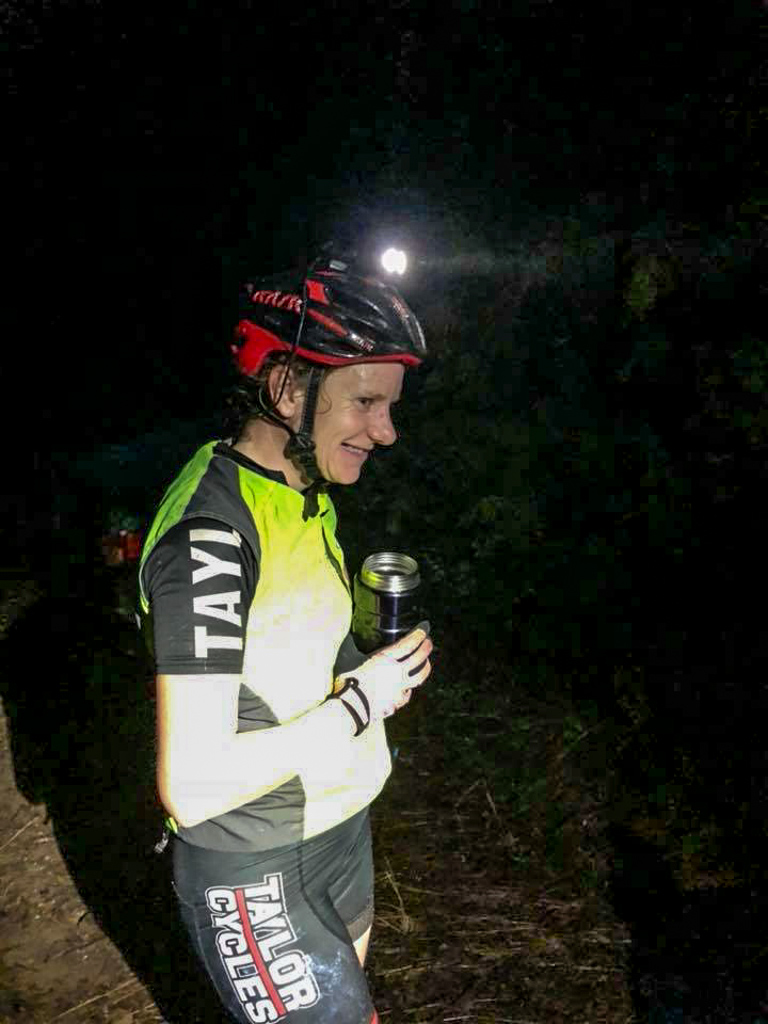 Around midnight the rain started falling.

This made the track incredibly slippery.

Rebecca found it difficult to pedal up the steep bits as her wheels spun in the mud.

Eventually the rain stopped and a thick fog descended, making it difficult to see.

“The fog was so thick I was unable to see more than a metre in front of me and could not see the track. Riding in thick fog, in the middle of the dark night, alone is the most unnerving feeling I think I have ever felt,” she said.

“Without my friends, Russel and Suzanne, at the top of the hill with their flash lights and hot chocolate/ chicken noodle soup I may well have called off the ride due to safety fears.” 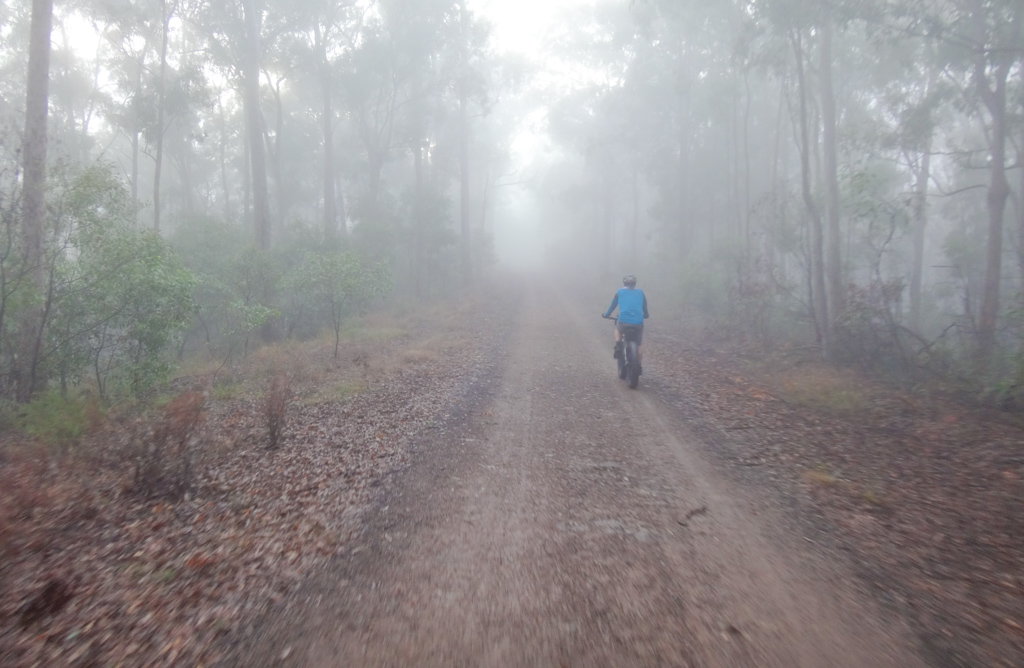 Shortly after dawn, Darb and I parked our cars at Camp Mountain, and rode through the bush to meet Rebecca and ride with her. 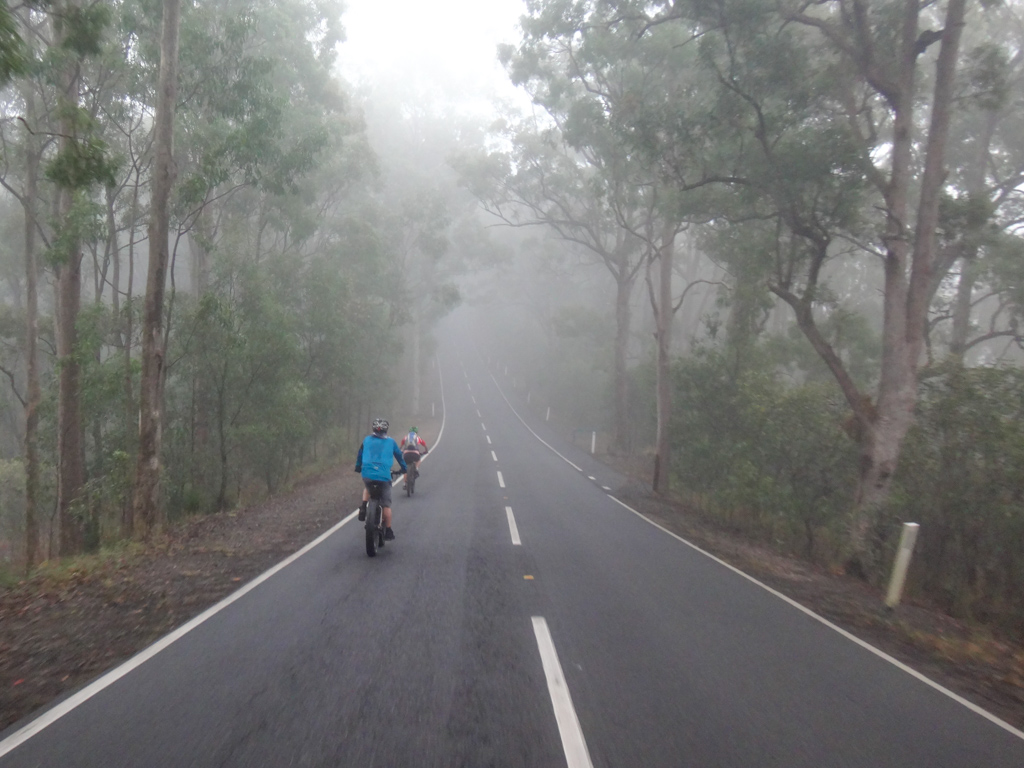 We met Kaye at Bellbird Grove, then followed Mount Nebo Road to the top of Centre Road where Rebecca had established her “Base Camp”.

The fog had started to lift, but it still swirled thickly in the valleys. 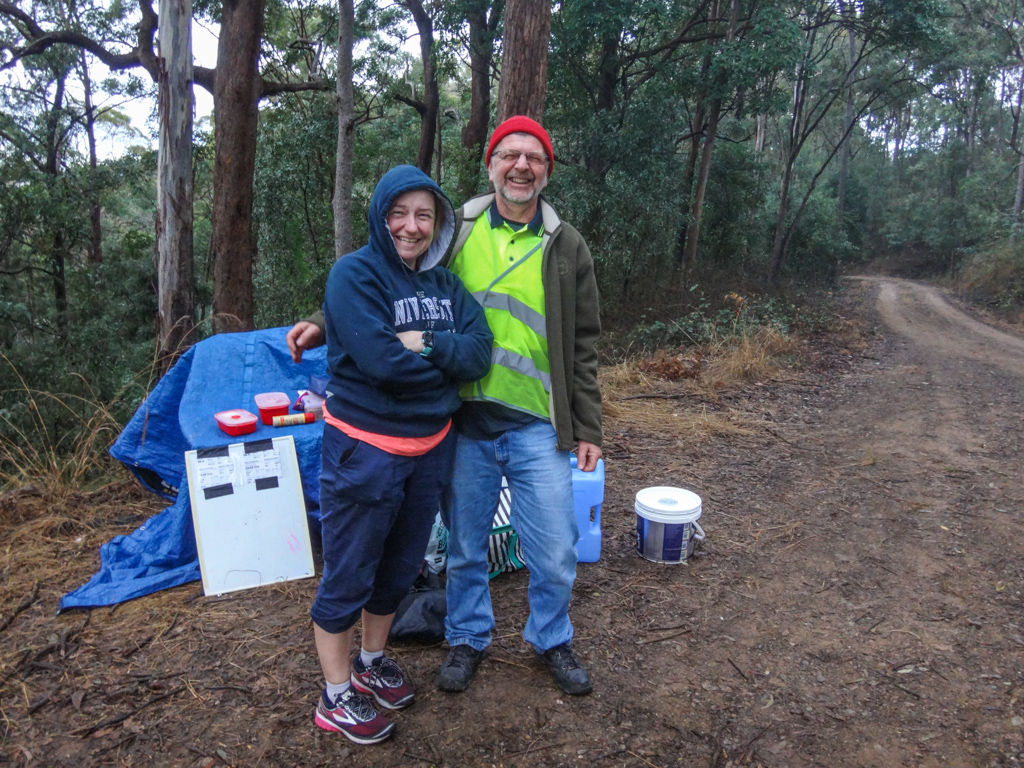 Suzanne and Russel had stayed overnight to keep an eye on Rebecca.

It had been a long cold night for both of them. 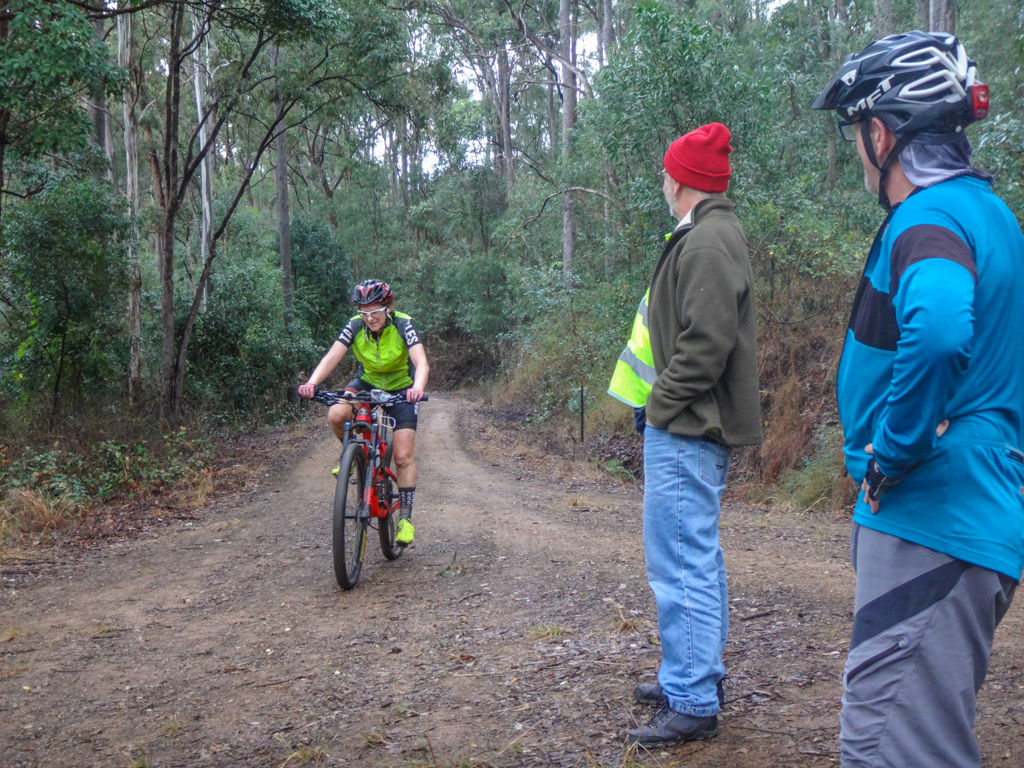 A few minutes later, Rebecca emerged from the hill climb.  She had done fifty laps so far, covering about one hundred and fifty kilometres and climbing over 8,000 metres.  If everything went well, she’d be at the summit of Everest in a little over an hour. 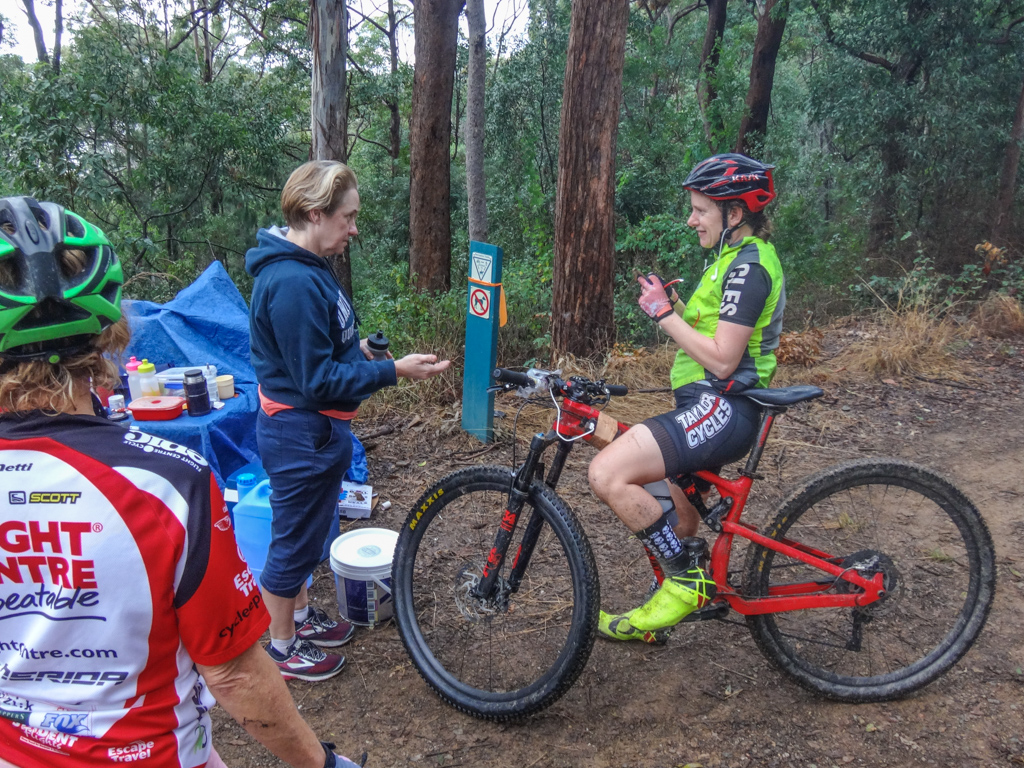 Rebecca admitted to Suzanne that she had started hallucinating while she rode.   A strange-looking stick near the top of the track had started talking to her.

Familiar with the hallucinatory effects of endurance cycling, Rebecca had suffered even worse hallucinations during a 24 hour race a few months earlier.

Suzanne and Russel watched her closely.  She soldiered on. 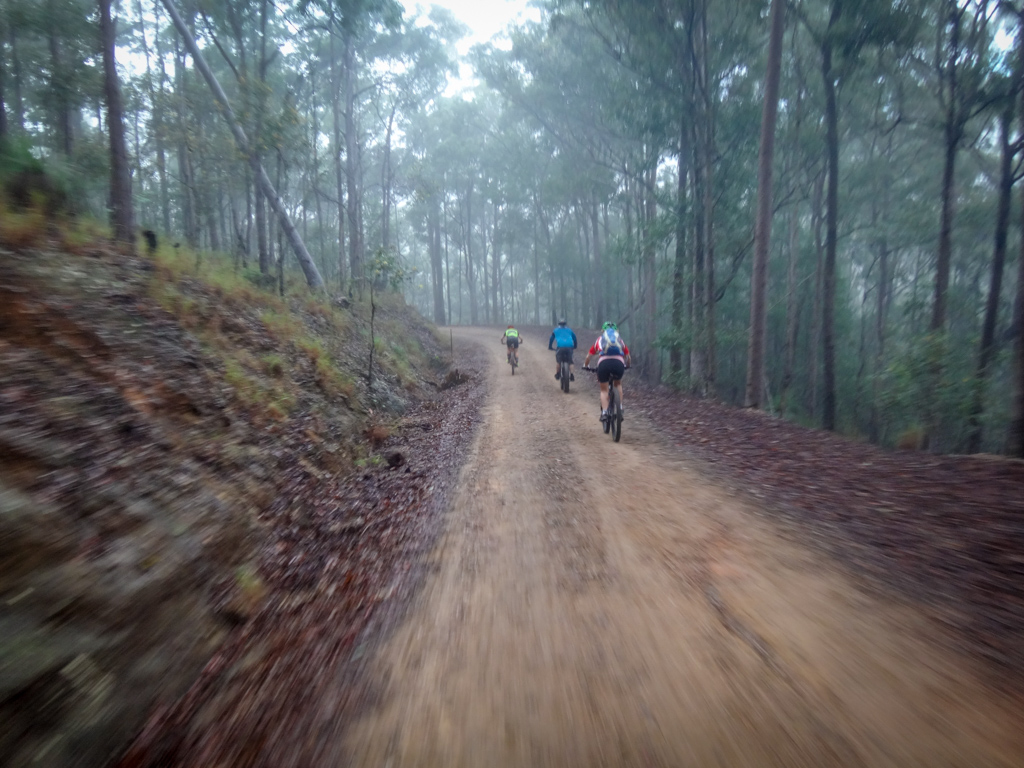 We rode down the hill with Rebecca for her fifty-first lap.  The mist thickened as we descended. 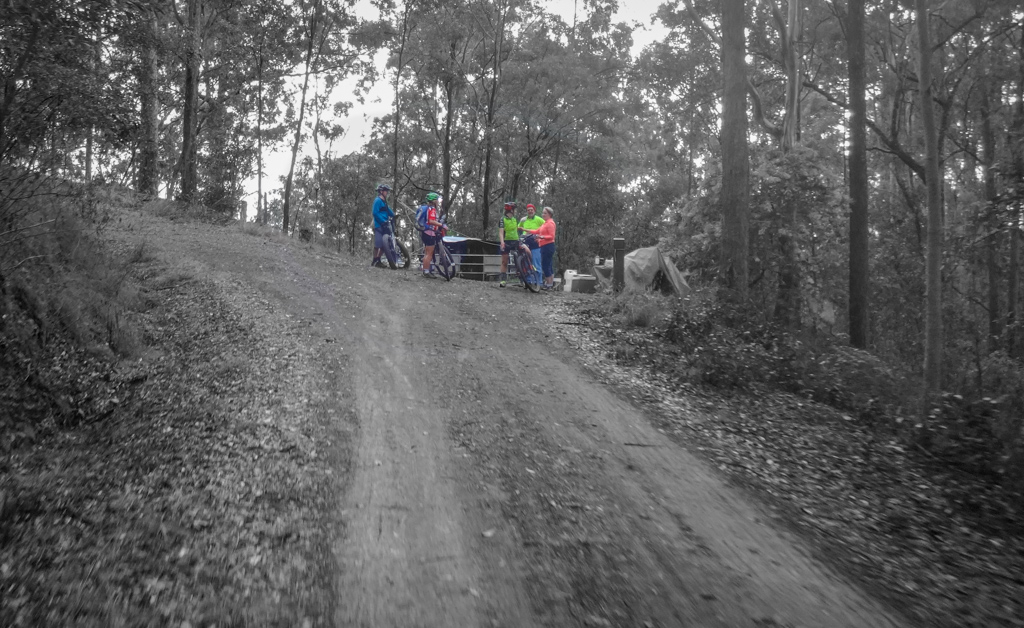 This was crazy.  Rebecca had ridden this hill fifty-one times.  I had fresh legs after a full night’s sleep, and I still couldn’t keep up with her.

On the next descent we met a few more riding buddies.

Jason and his mates had ridden over from Gap Creek to offer some encouragement.

A little later, Neil “Bangers” Bang and his crew arrived and rode with Rebecca for a while. 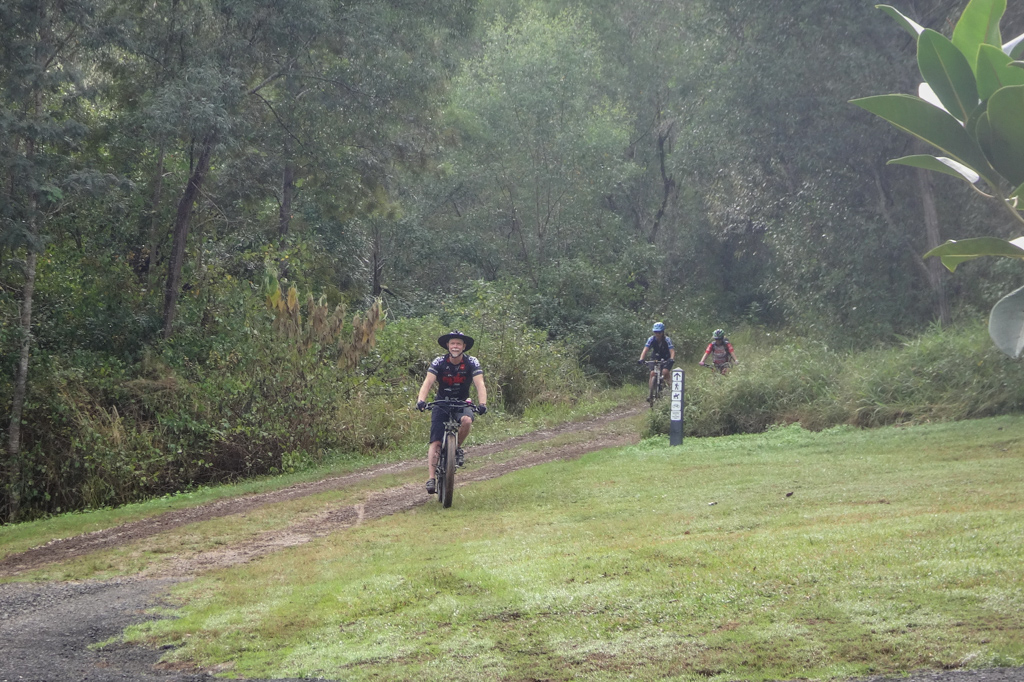 After riding a couple of laps with Rebecca, our group took a detour down to Gold Creek, on the other side of the range from Centre Road. 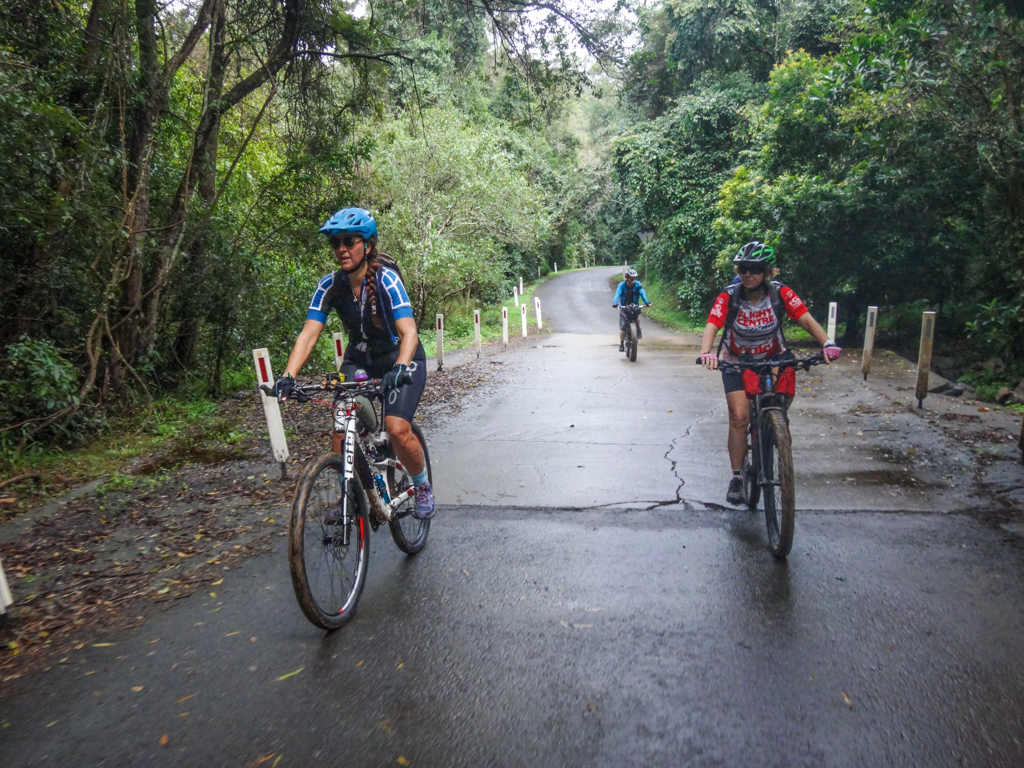 These flat roads were easier than “Everest”. 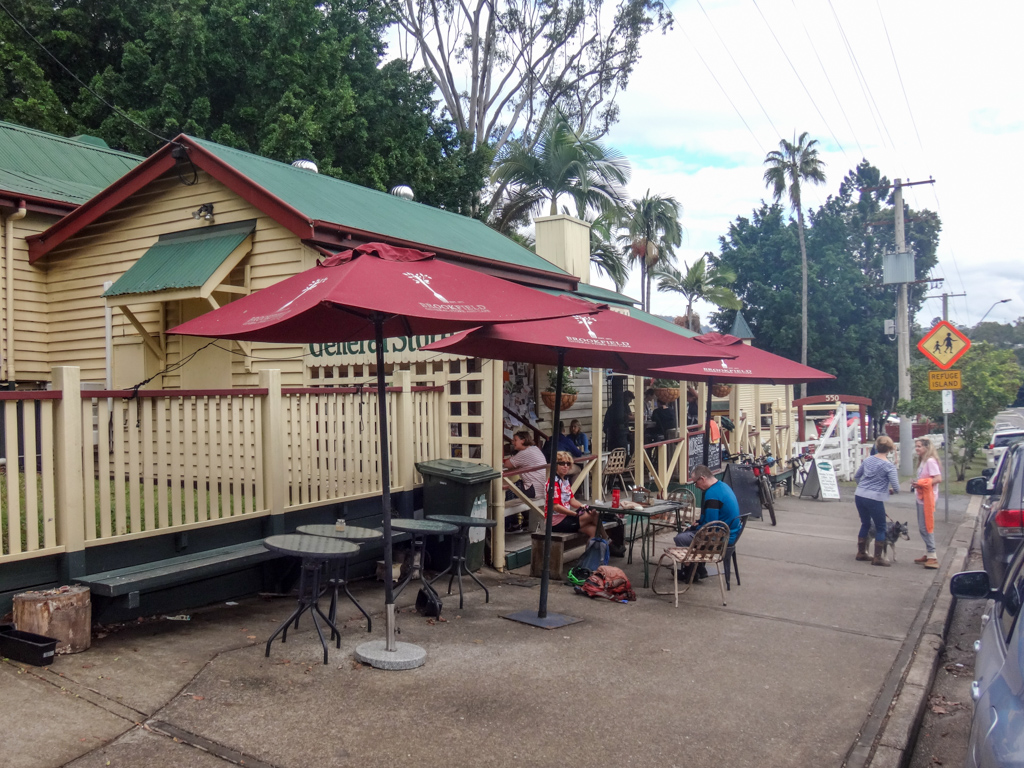 We stopped for morning tea at the Brookfield General Store… 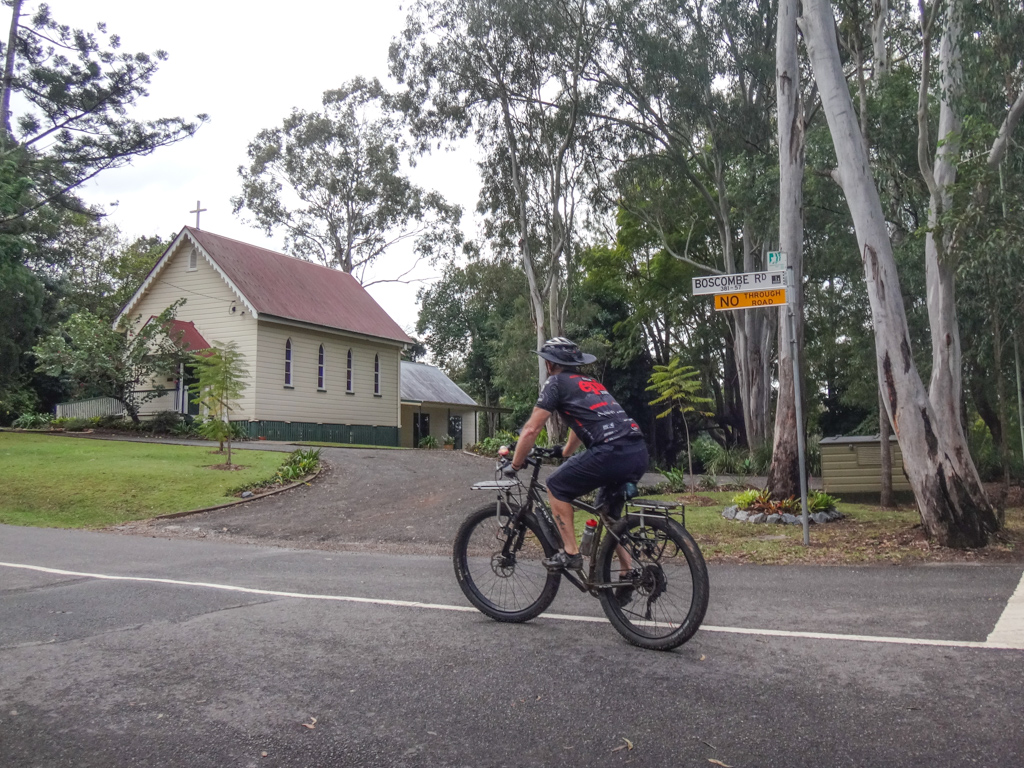 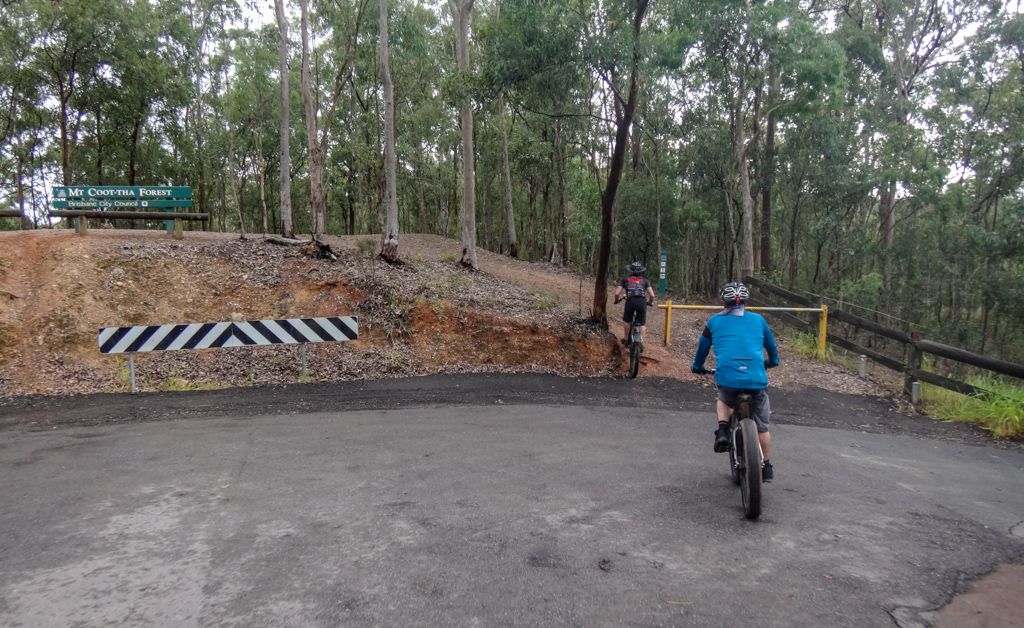 …then headed back up into D’Aguilar National Park via Boscombe Road.

Back on Centre Road, Rebecca completed her final lap, carrying something strange in her left hand.

She picked up the stick which “spoke to her” during the night.  It’s not every day you get to meet a talking stick.

Rebecca rode a total of 167 kilometres in just over twenty-two hours including breaks.

During that time she climbed about 9,300 metres in elevation, and burned about 8,000 kcal.

This is a superhuman effort.

Yes – you need to be physically fit, but this sort of endurance requires something extra.

Rebecca explained, “I now realise and appreciate the fact that I have a massive capacity for mental strength and toughness.”

You’ve got it in spades, my friend 🙂  Well done!

If you’d like to read more about Rebecca’s amazing accomplishment, she’s written about it here.

For those wanting a slightly less demanding ride through the area, we mere mortals rode just under forty kilometres in five and a half hours. 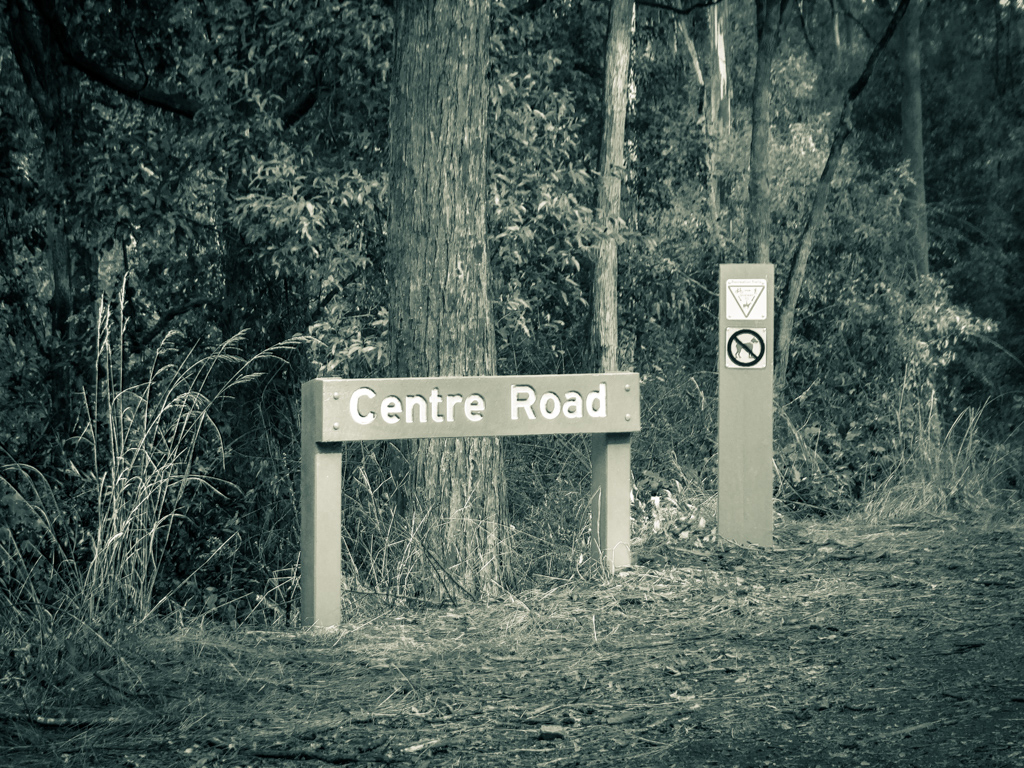 One Reply to “Everest”