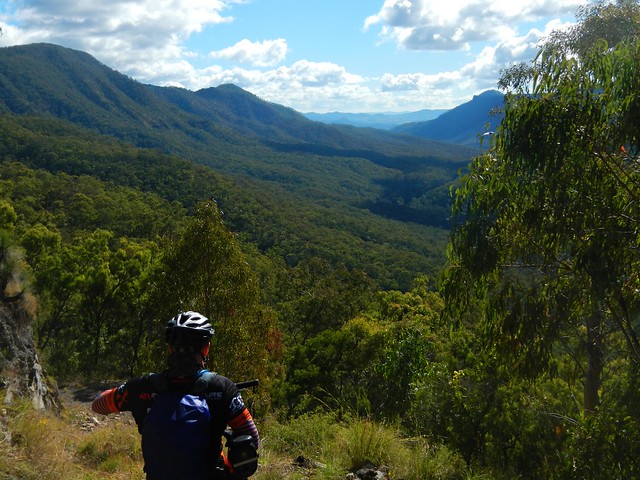 Todays adventure was a point-to-point ride from Goomburra National Park (near Cunninghams Gap) to Mount Sylvia. I wanted to fill in another gap in my Ride Network Map, and Becca, Eric and Darb were kind enough to indulge my whim and ride with me. We’ve ridden in Goomburra before, and were familiar with the steep climb up to the top of the range, peaking at about 1,100 metres above sea level. This was going to be a long day, so we wanted to save some time at the start by driving to the top of the range and starting our ride there… 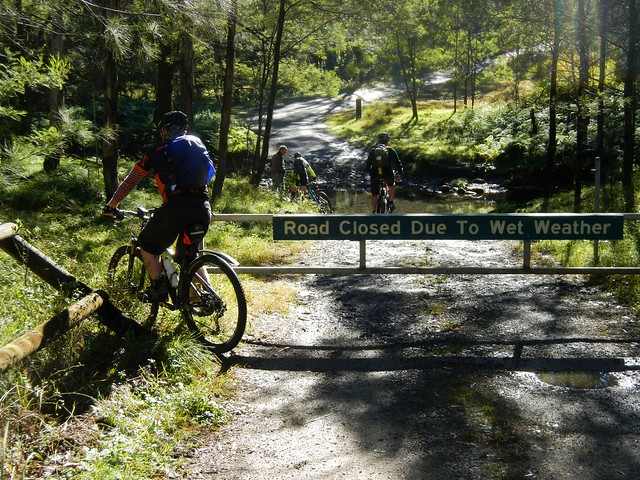 Unfortunately, the road to the top was closed to vehicles – a locked gate blocked the way. So we had to ride our bikes to the top instead. 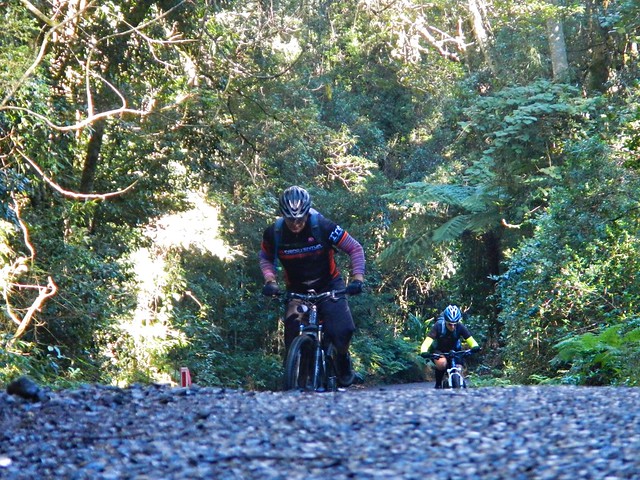 I thought this was poetic justice. I had recently written an article for The Mountain Bike Life about Hill Climbing in which I enthusiastically described how wonderful it was to ride a bike up steep hills. It seemed like the universe was forcing me to practice what I preached 🙂

The climb had added an hour’s riding time to our trip, but it was still worth the effort. 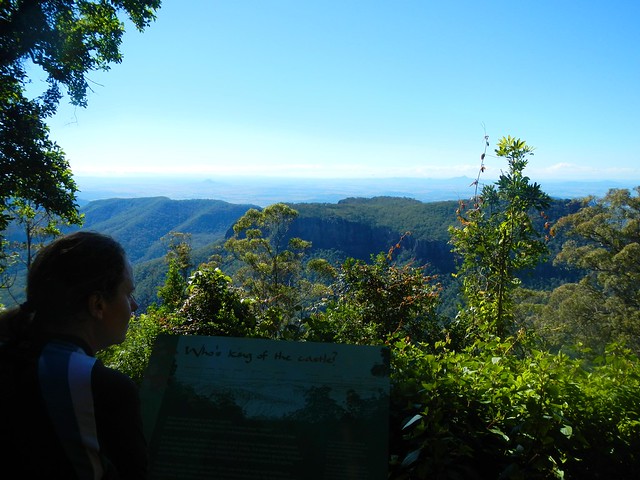 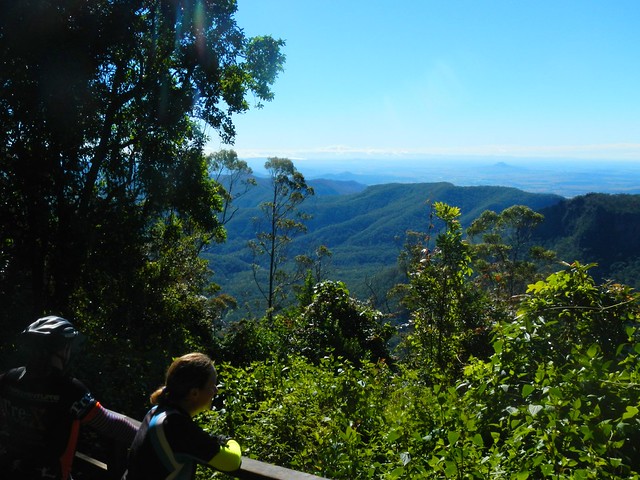 No ride “to the top” at Goomburra is complete without a side-trip to the Mount Castle Lookout, so we left Eric to mind our bikes while we hiked a few hundred metres through the rainforest to enjoy the view. Despite dismal rain the previous day, and heavy fog that morning, it had transformed into a glorious day. 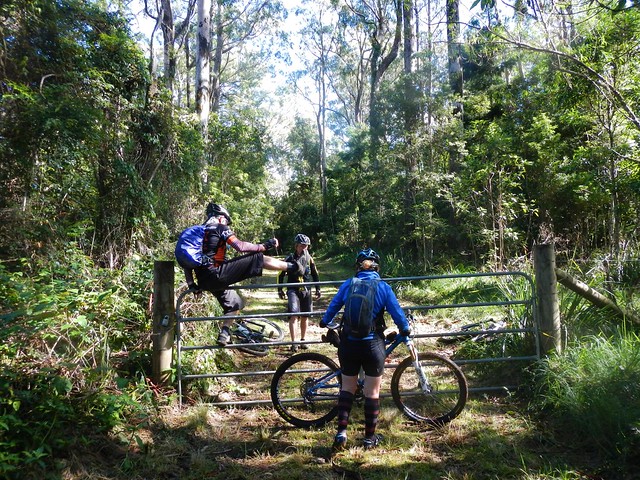 From the lookout we turned westward and followed a forestry track along a sharp high ridgeline, jumping a few locked gates as we went. Try doing that in a 4wd 🙂 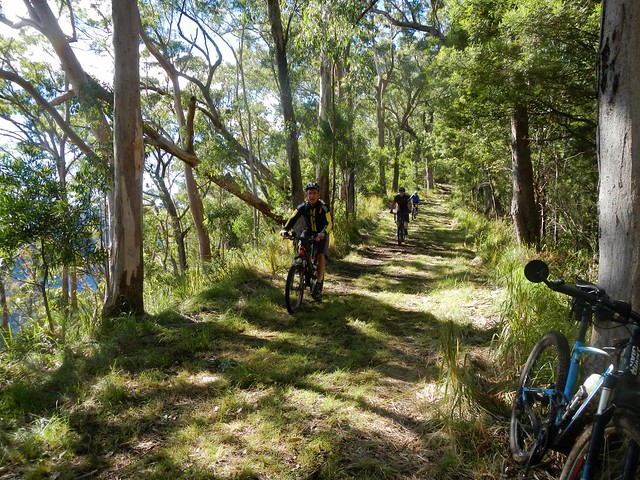 Riding this ridge line is like cycling on a knife’s edge. On either side the terrain drops off steeply. As we rode, on our left and right, we could see the valley below us through the trees. 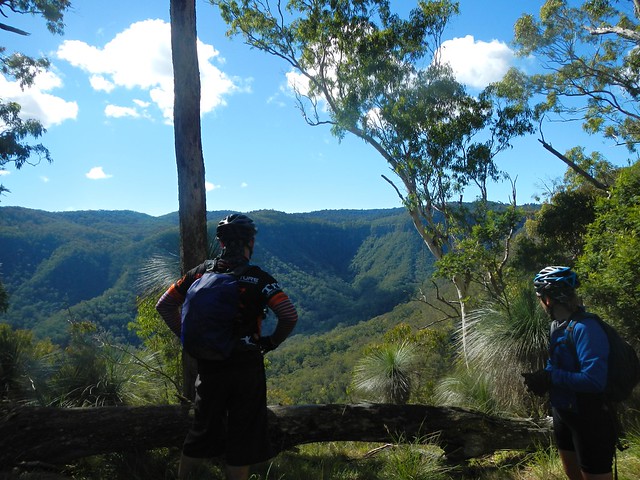 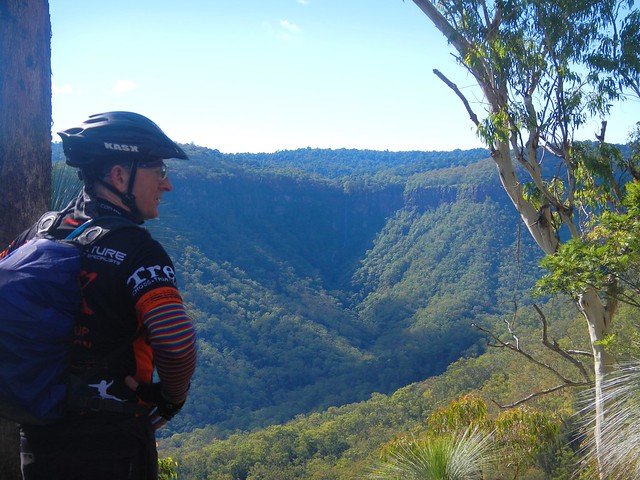 The views up the valley towards the waterfall were stunning. At times like this I’m so glad I’m able to ride a bike in the bush in this part of the world. Doesn’t it look fantastic? 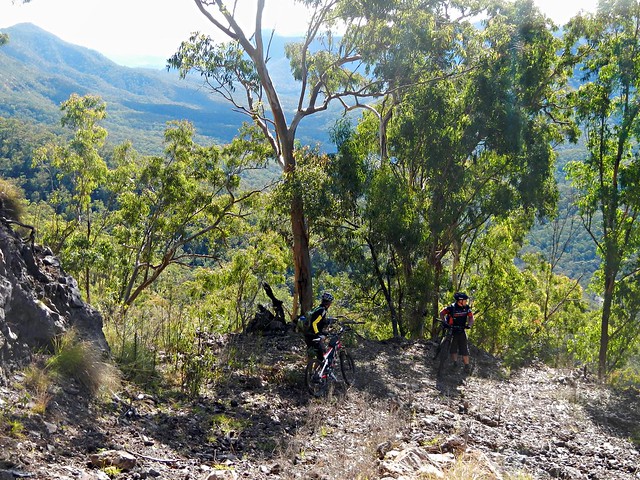 Eventually we reached the end of the ridgeline. It was time to drop down into the valley. Our plan was very optimistic. We had based the route on faint track marks we could make out from aerial photos. We were aware that the descent would be steep (up to 50% gradient in parts), and that we’d have to be very careful. 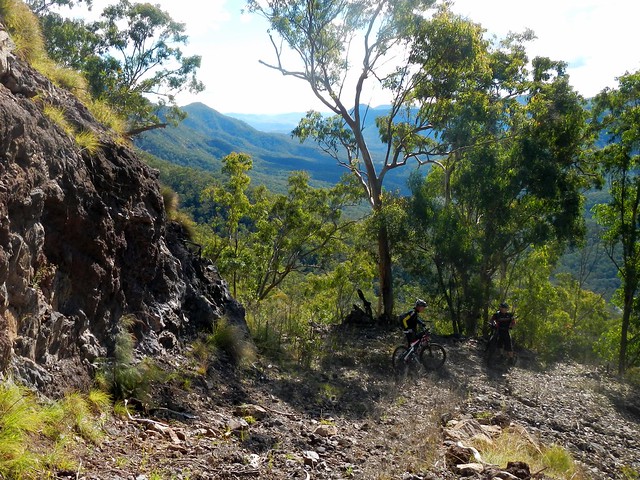 Yep – it was steep alright. What impressed me was that we were actually able to ride any of it 🙂 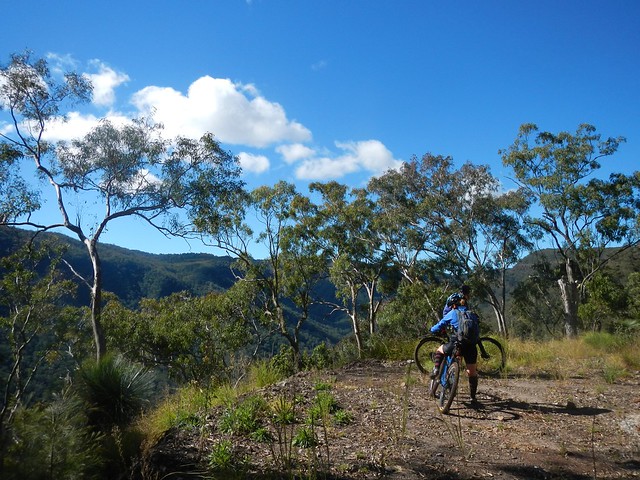 The views were amazing. We stopped every few minutes to soak up the panorama. 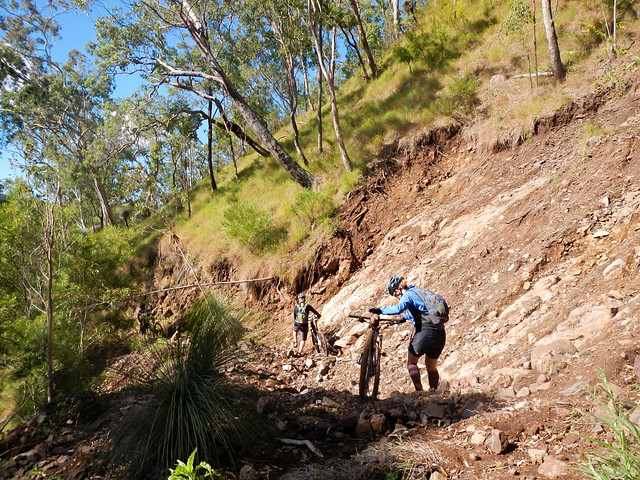 Recent wet weather had caused land-slips which impeded our progress. Thankfully we were able to walk over the rubble. 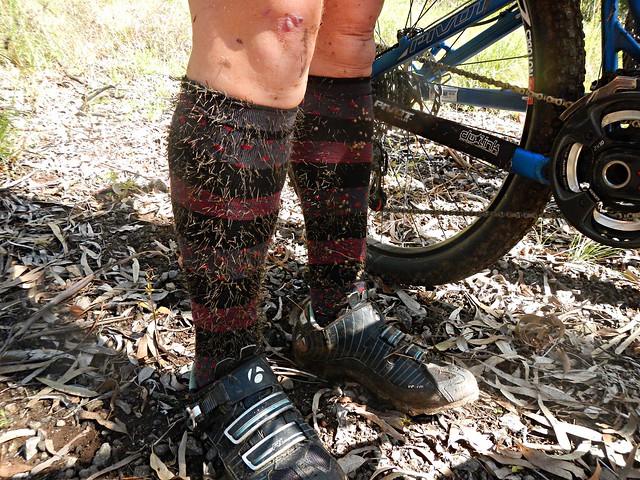 One thing that was unavoidable, however, were the cobblers pegs. After bashing through the undergrowth for a few minutes, it looked like our legs had sprouted wierd hairs that had poked through our socks. I think it’s going to take ages for me to pick them out of my clothes. 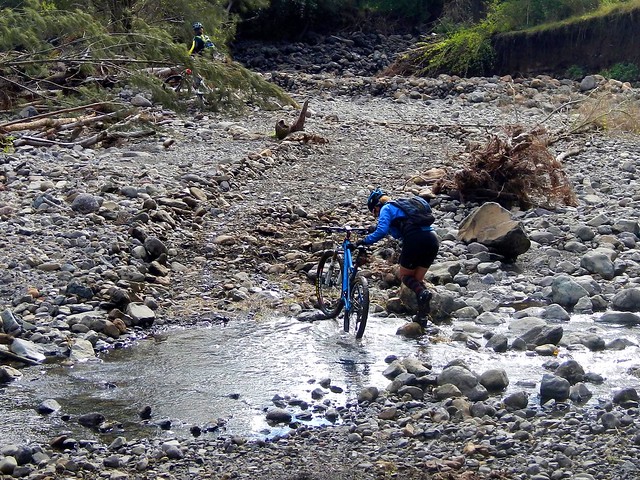 Eventually we reached East Haldon “Road” which follows the creek along the valley. I use the term “Road” lightly. It was a rough track to follow. 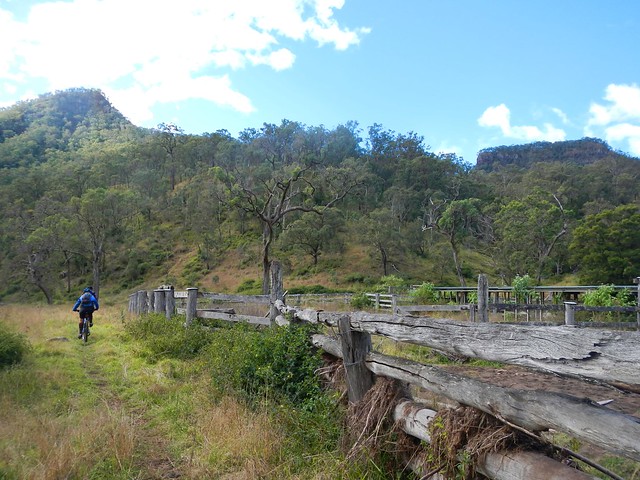 The track took us past a place on the map known as “Top Yards”. I’m guessing this was a place where graziers kept cattle in earlier times. 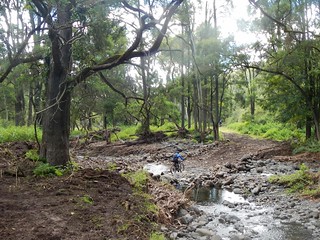 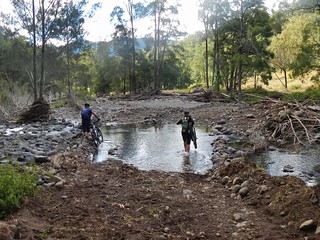 We had to cross the creek many times. Initally I tried to “rock hop” and keep my feet dry. Eventually I just hardened up, and waded through the water. 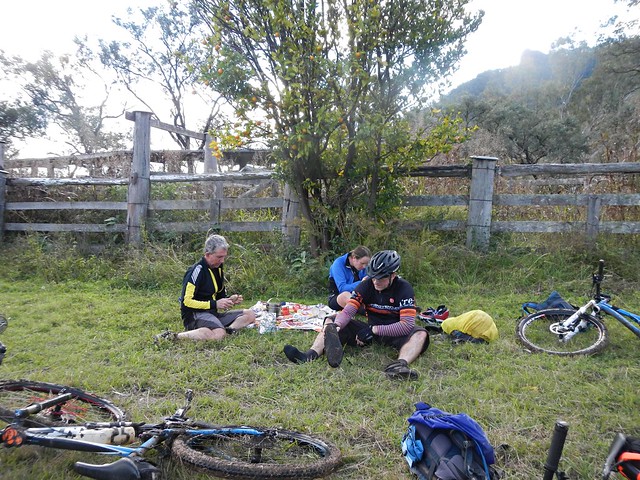 Eric surprised us. He had told me that he was carrying climbing rope in his frame bag for our precarious descent. But actually he was carrying a gas stove and picnic blanket. When we caught up to Eric at the “Bottom Yards”, he had the water boiling, picnic blanket spread out, coffee and hot chocolate rady, and even some short-bread.

We were cold and hungry. What a pleasant surprise!

Thanks for being so thoughtful, Eric. 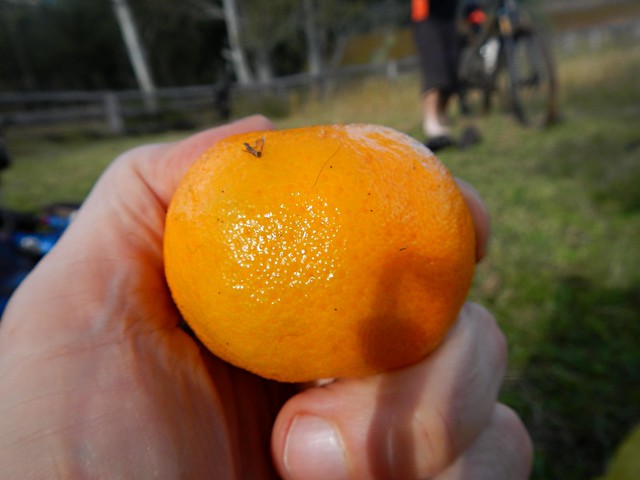 As an added bonus, we were sitting under a mandarin tree laden with fruit. We were able to pick some ripe mandarins to enjoy with our lunch. They were delicious! 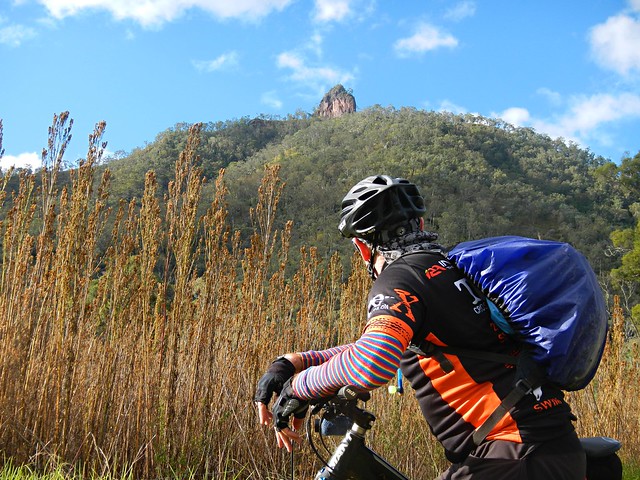 As we rode out of the valley, a prominent rocky outcrop came into view. This is “Glenrock” – it’s what the state forest is named after. 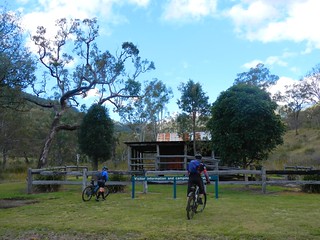 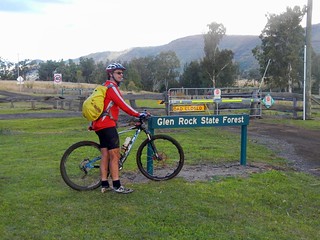 After countless creek crossings and what seemed like an eternity of rough tracks, we finally made it out of the state forest.

It had taken us over 4 hours, and we’d only ridden 25km. Hard work. That must have been the slowest 25km I’ve ever ridden. In fact I’ve done faster hikes than that. 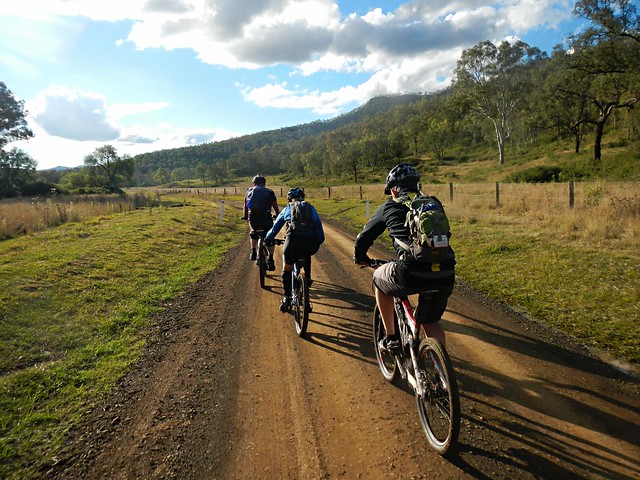 The rough tracks became smooth dirt roads. While we still had about 30km to go, the toughest part of the ride was over, and we were able to enjoy a smooth, fast, ride to Mount Sylvia. 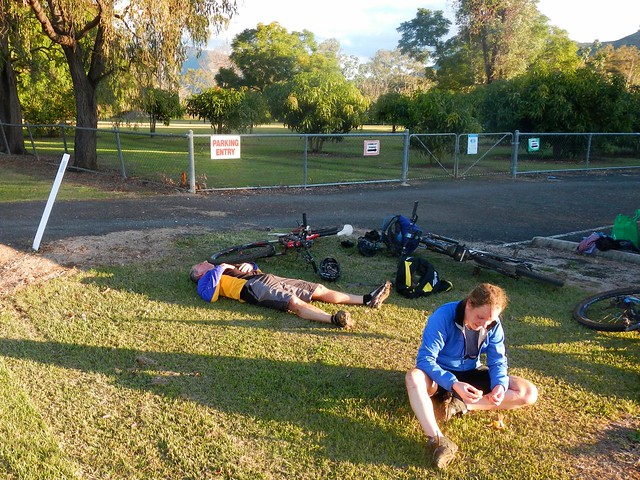 It had taken us over 6 hours to ride 50km. We were delighted to reach our destination and relax.

If you’re going to try doing it, be prepared for very rough country. There are no groomed trails out here. In places the track is difficult to see. And (of course) the descent from Goomburra is dangerous, so take care.

Thanks Becca, Eric and Darb for a great day out.

Thanks also to Mike for driving us out there, and to my dad, Bruce, for helping me get the Van out to Mount Sylvia the day before.

Point-to-point rides take a bit of extra planning, but they’re worth the effort!