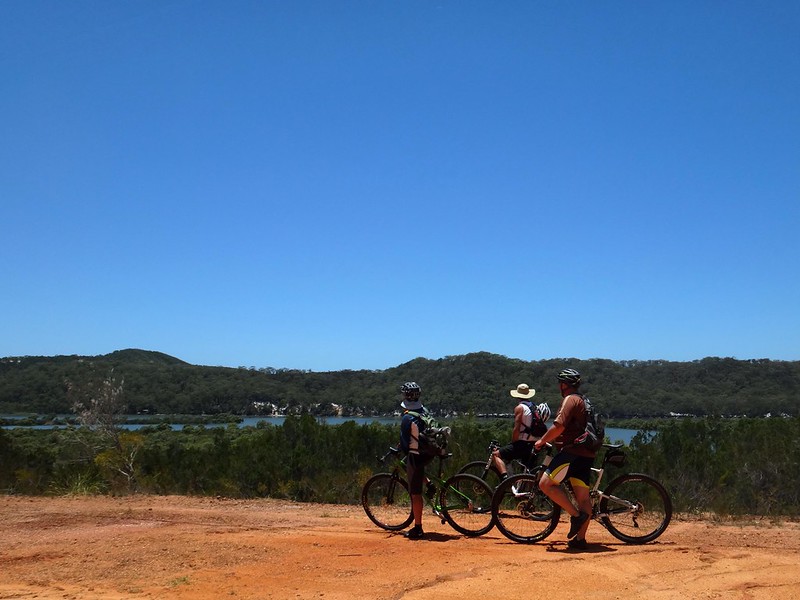 Just a short skip across the sparkling waters of southern Moreton Bay, Russell Island feels like it’s a million miles away from the bustling mainland.

We thought we’d try something unusual when we hopped on the ferry this morning. Although the island is only eight kilometres long, and less than two kilometres wide, I had planned a circuitous route which ambled over 40km along dirt tracks, gravel roads and grassy fields with spectacular views over the bay in every direction. 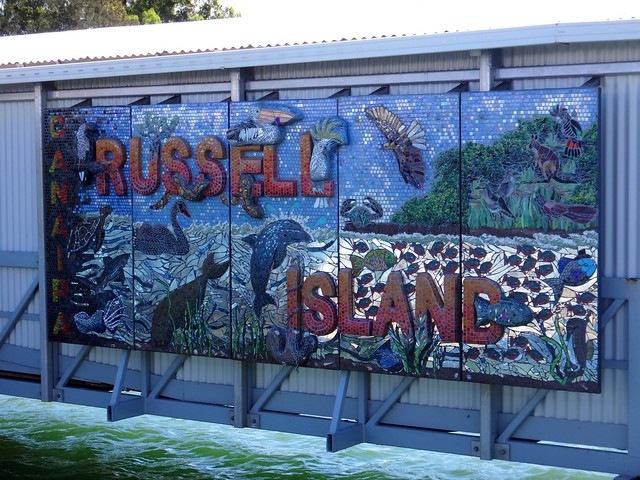 “Kanaipa” is the aboriginal name for what we call “Russell Island”. The traditional owners are the “people of the sand and the water” – the Quandamooka people of Moreton Bay.

The word “Kanaipa” or “Canaipa” means “Hardened spear” in their language. The north-eastern point of the island juts out in a long skinny spear-shaped peninsula towards the coast of Stradbroke Island (which they call “Minjerribah”). In fact the coast of Straddy is indented around this peninsula as though the two islands have been locked in an eternal fight, with Canaipa’s spear piercing Minjerribah.

The Quandamooka took advantage of this geographical anomoly to “island skip” across the bay, wading or paddling a couple of hundred metres between each of the islands to eventually get to the mainland. They could therefore venture all over South-East Queensland, reaching the D’Aguilar Range, then northwards to the Blackall Range and even as far as the Bunya Mountains.

I think many of my Mountain Biking friends would feel some affinity with the Quandamooka in that our tyres have also ranged over those places, and like them, we can pretty much trace our tracks from there all the way back to this island. 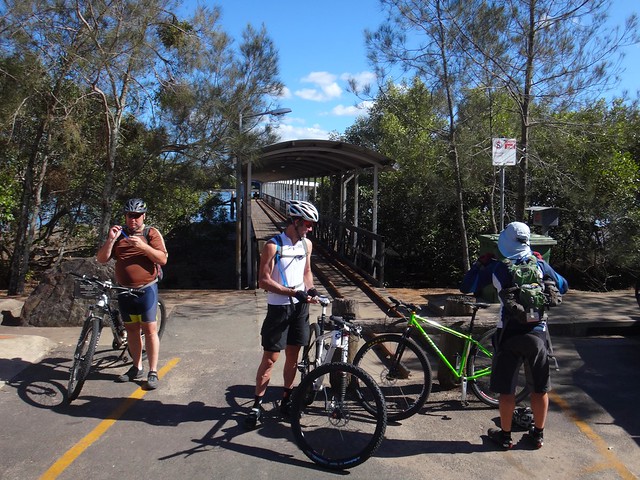 After disembarking and making sure everything was in order, we set off. 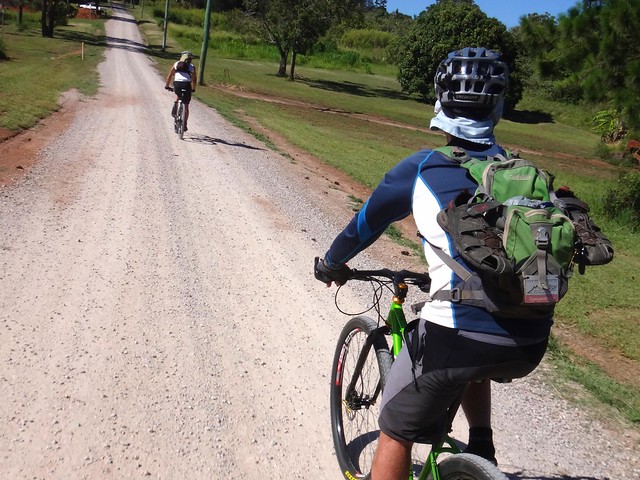 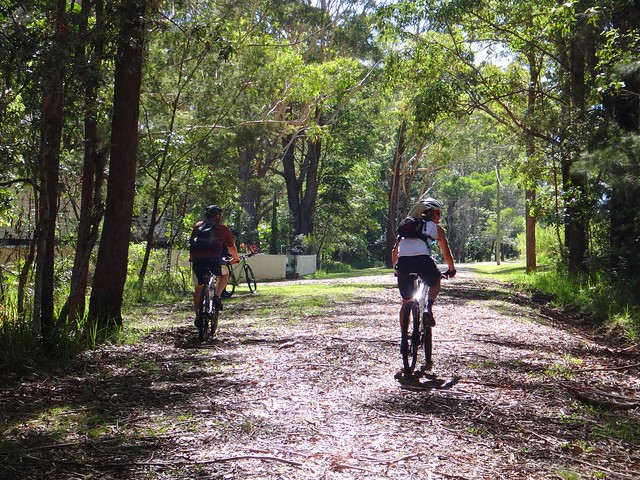 Russell Island is unique in that it is criss-crossed by a tight network of gazetted, but undeveloped roads. It looks like property developers in the 1970’s took a map of the island, subdivided it into a myriad of small subrban lots and roads, but then forgot to build most of it. The upshot is that whevever you go on the island, there is a quiet dirt track to follow…. 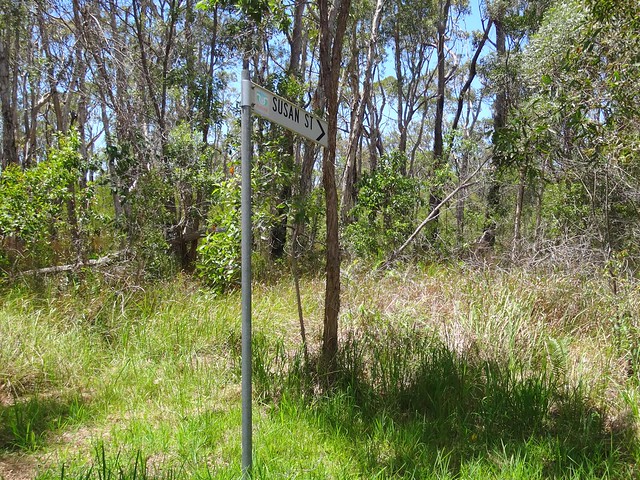 …although it will often end up leading into a mangrove swamp or thick scrub. 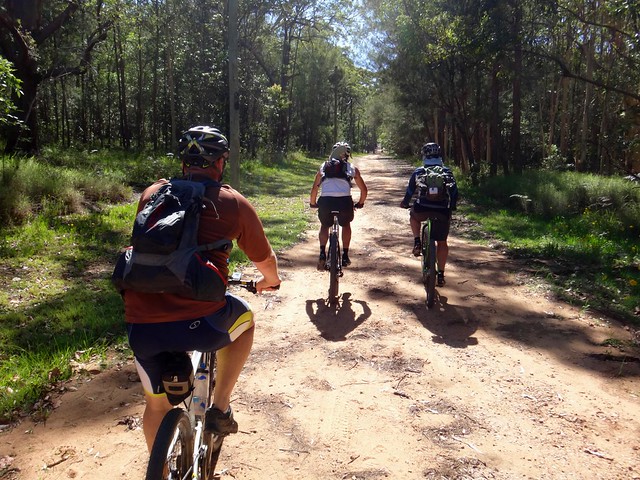 We weren’t in a hurry – we had all day, so we followed the tracks to see where we’d end up. 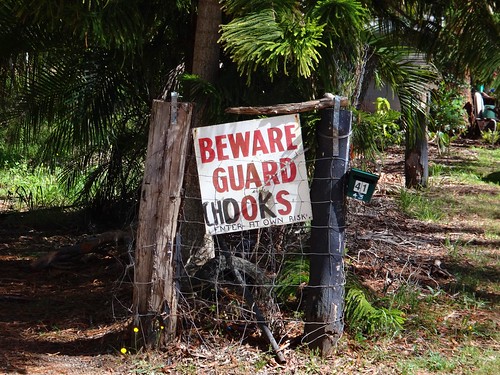 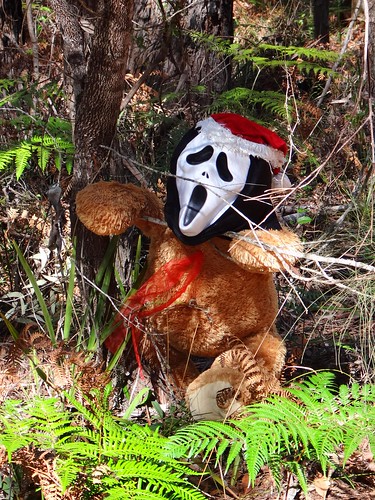 As often happens when you’re not in a rush, we encountered some strange things. A chilled out looking man playing a guitar on his front porch assured me that he didn’t have killer chooks (“Chickens”). They had, in fact, all been killed by dogs not long ago.

I secretly heaved a sigh of relief. 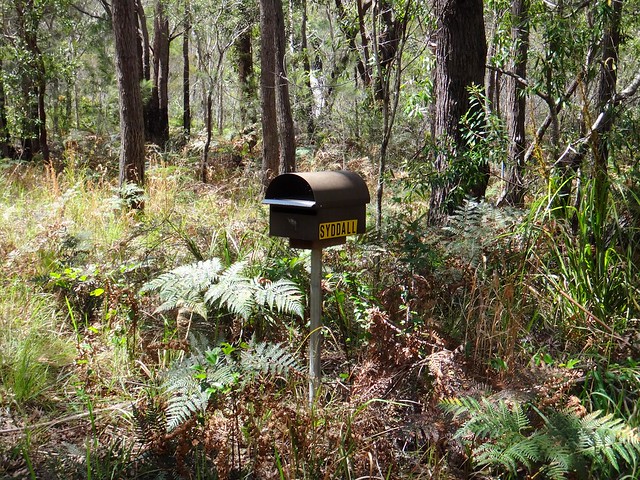 Speaking of strange things: at the end of a dirt track that disappeared into the scrub, we encountered this letter box. Hopefully perched on the edge of the swamp, in the middle of nowhere, it appeared to be waiting in vain for a postman that would never come. 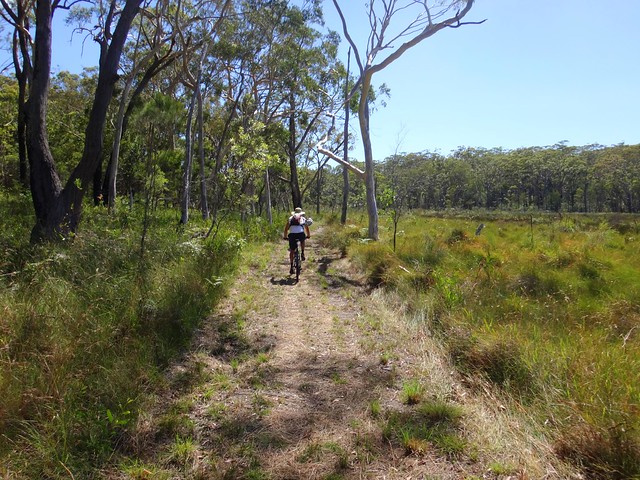 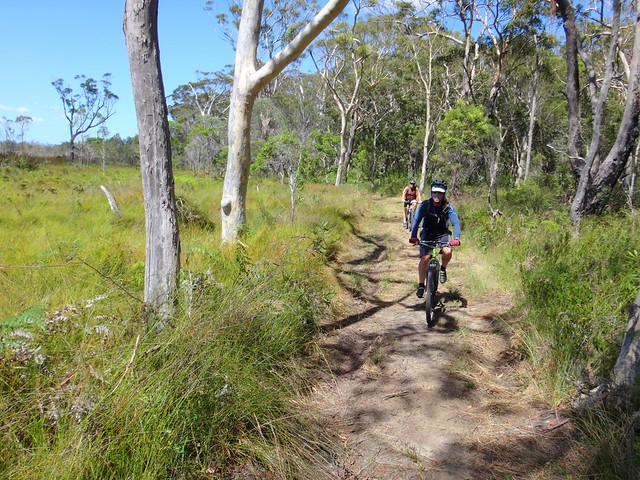 Although we almost missed the entrance, we rode this trail through the “Minjerribah Conservation Area”. Following the perimeter of a small wetlands area in the middle of the island, this fun 2km trail was bounded on one side by swampy heathland, and on the other by open eucalyptus forest. 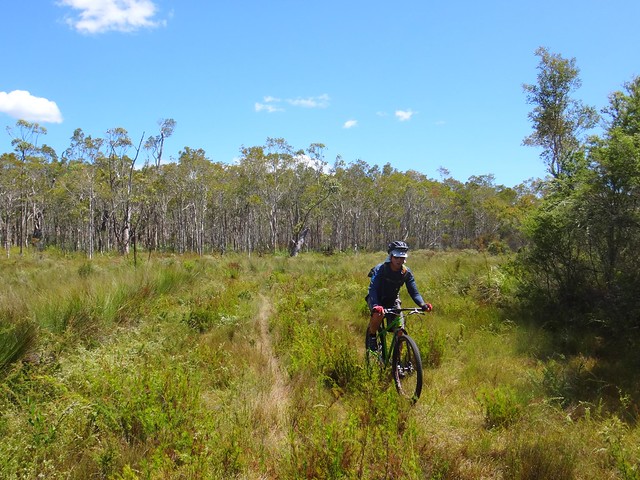 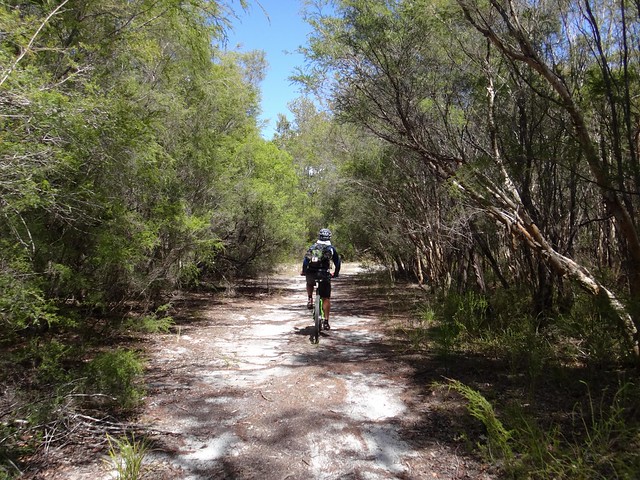 Occasionally hitting a few dead-ends, and false turns, we slowly made our way towards the south-western tip of the island. 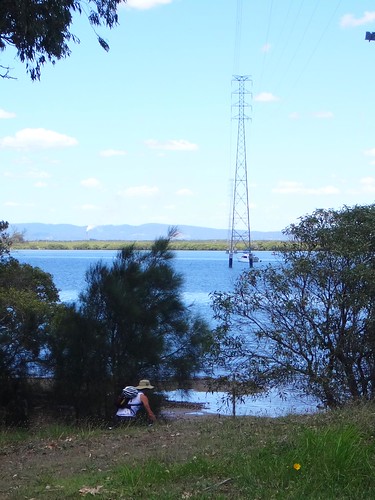 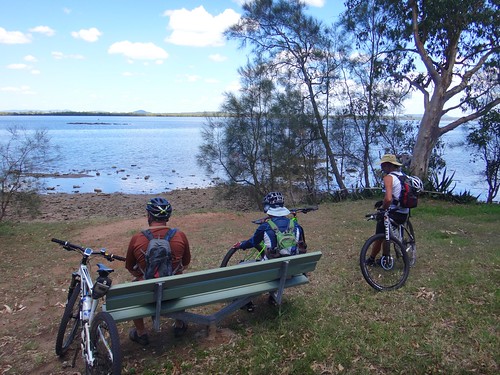 We had a short break by the boat ramp at “Rocky Point” looking westwards towards the mouth of the Logan River at Carbrook. 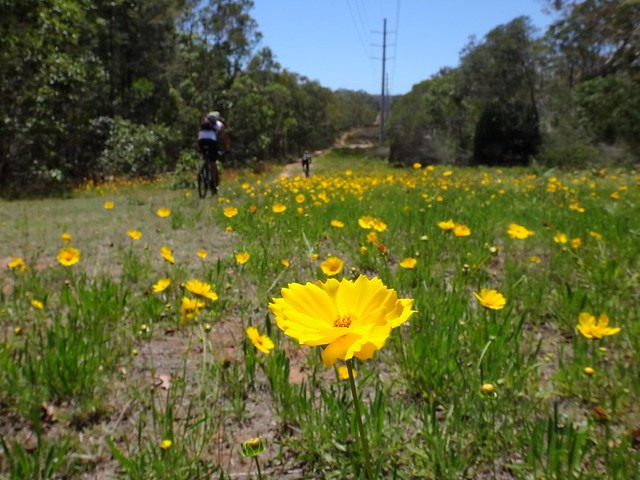 We then rode along the southern coast of the island, dodging a few mangrove swamps as we followed the trail to the east. 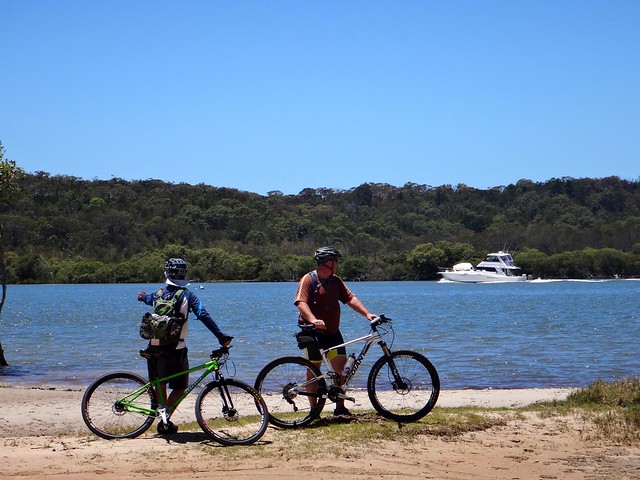 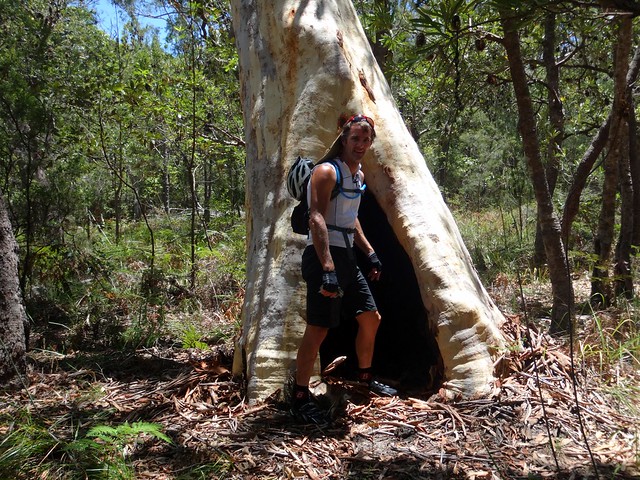 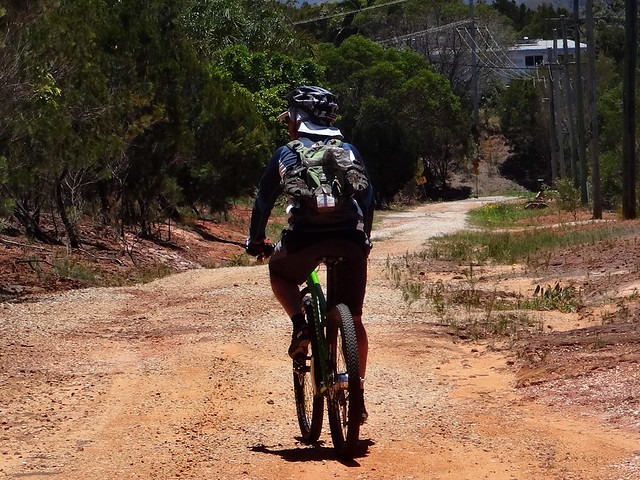 … it’s also the hilliest part of the island, offering some enjoyable trails through the bushland, and one or two challenging climbs. 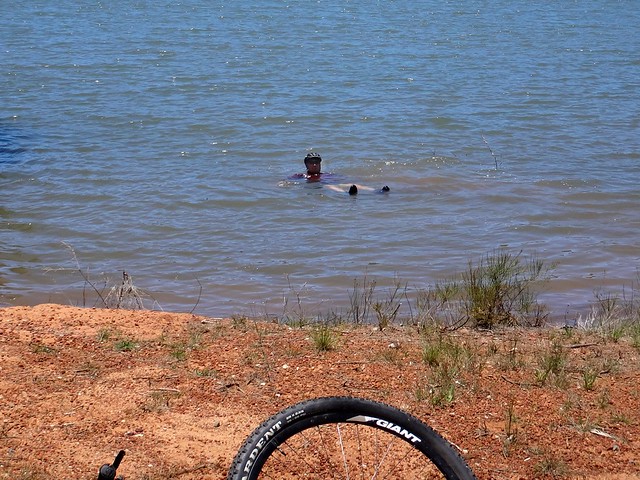 Simon started to feel the heat at this stage of the ride, and opted to take a break and cool off for a few minutes in the water. 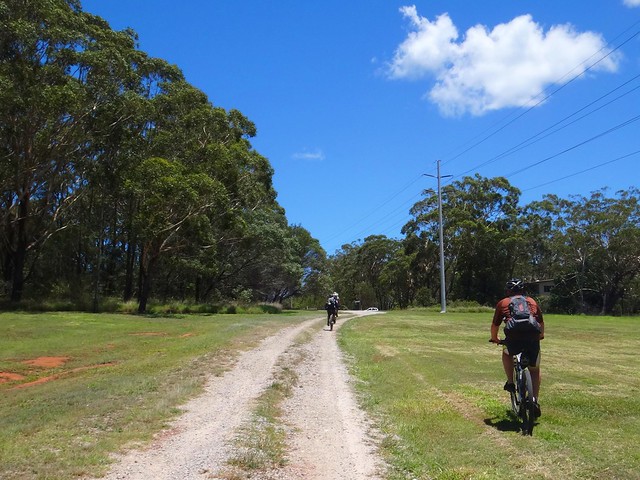 As we neared the more populated northern part of the island, the trails opened out into pleasant dirt roads. We followed some bike paths out to the end of the “spear” on Canaipa point before rolling back into town for lunch… 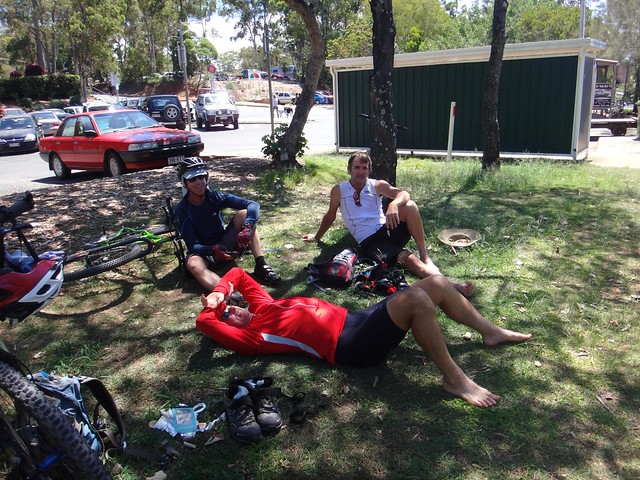 … and a well-earned rest on the grass by the ferry terminal. 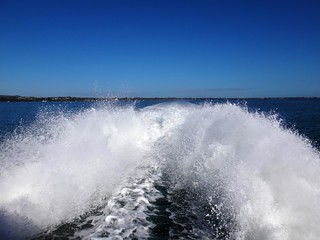 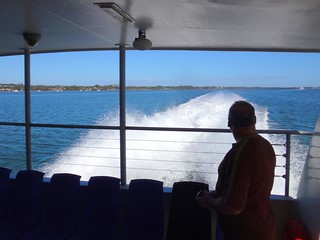 Thanks Eric, Jason and Simon for a great day out!

We rode a total of 46km in a leisurely 5 hours including breaks. I burned about 1,900 kcal, and we climbed almost 600m of vertical ascent – which is surprising for what I thought was a flat island.

I’d rate this ride 6 out of 10 on the tough-o-meter, but bear in mind I’m nursing a knee injury, so fitter riders would find it much easier. The most enjoyable way to do this ride is at a leisurely pace. It’s an island, after all. Take it easy and enjoy it!