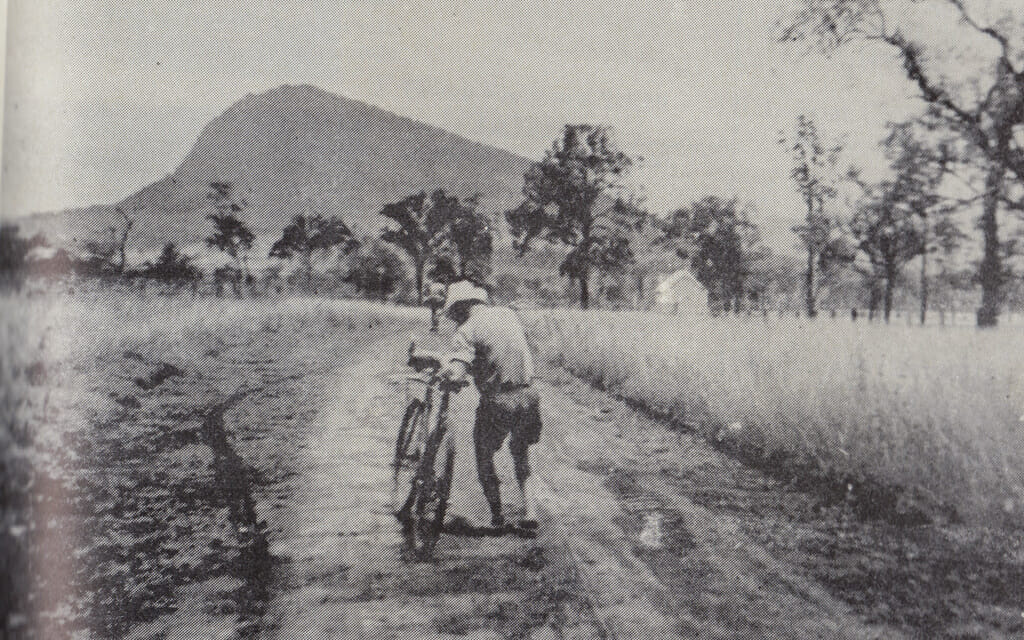 Once upon a time, a young bloke named Les used to ride his bike from Moogerah to Ipswich and back so he could spend time with his elderly Grandmother. Today we retraced his journey. 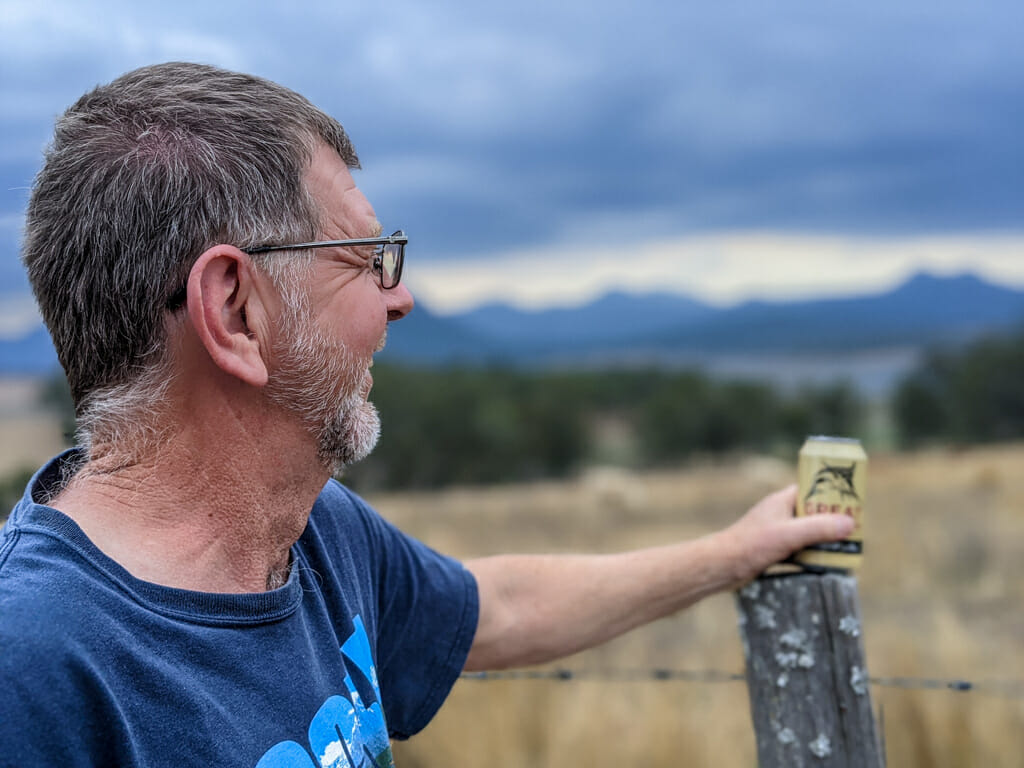 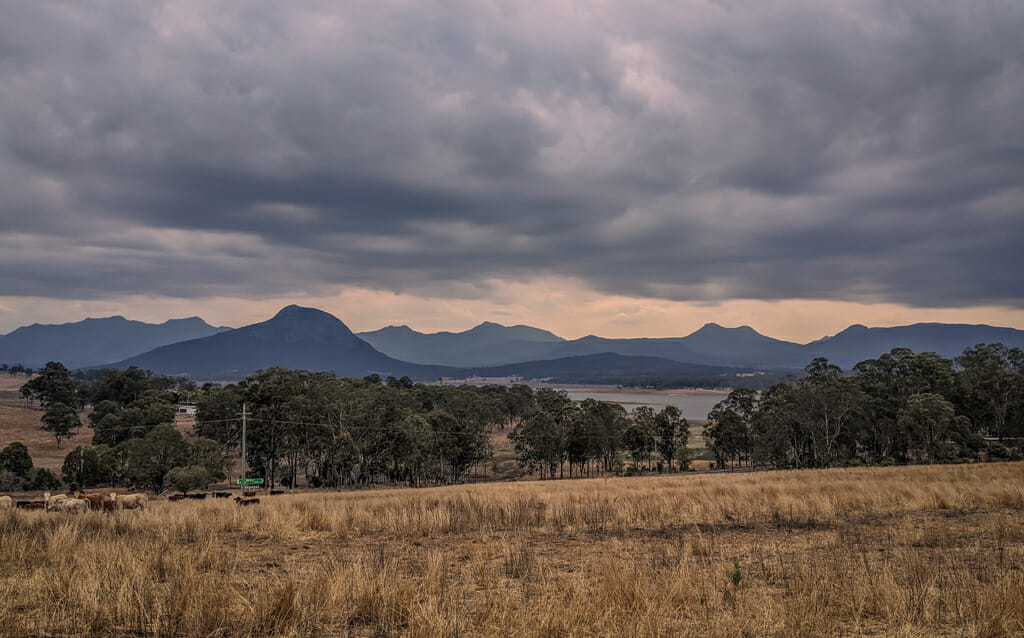 Every day he’d wake up to amazing views of Lake Moogerah and the Great Dividing Range.

Russel’s father, Les, passed away recently.  So Russel asked us if we’d like to join him on a tribute ride, following some of the old roads that Les would have ridden when he was a young man.

What a wonderful idea! 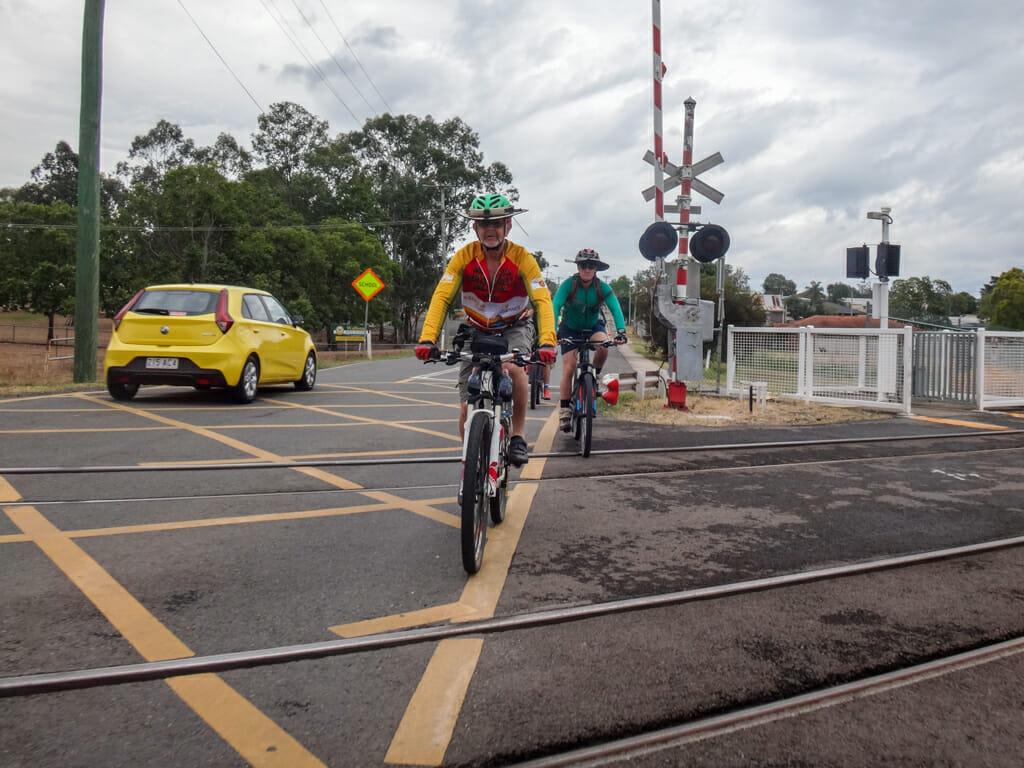 We started our ride in Walloon, near Ipswich and headed south towards Amberley.

Rather than follow busy paved roads, we left the tarmac and followed a dirt track between an old mine, and the RAAF air base.

In his younger days, Les joined the RAAF Air Cadets.  Russel tells me Les and his mates felt very pleased with themselves in their crisp uniforms, and wore them in public to impress the ladies – even though they weren’t supposed to. 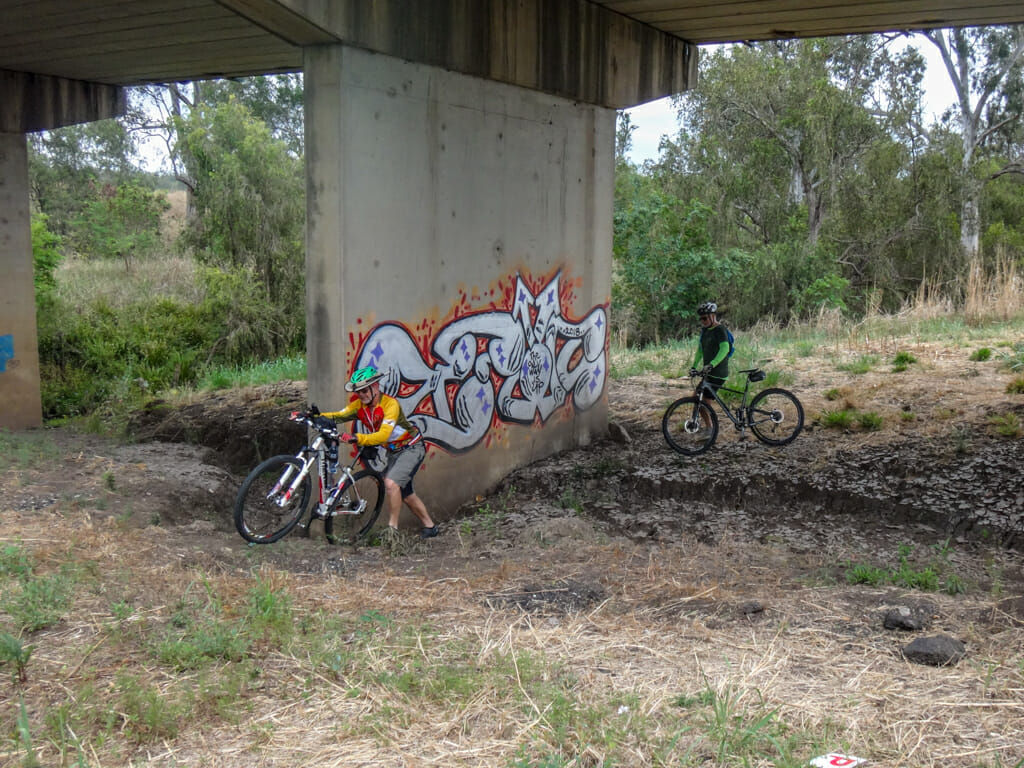 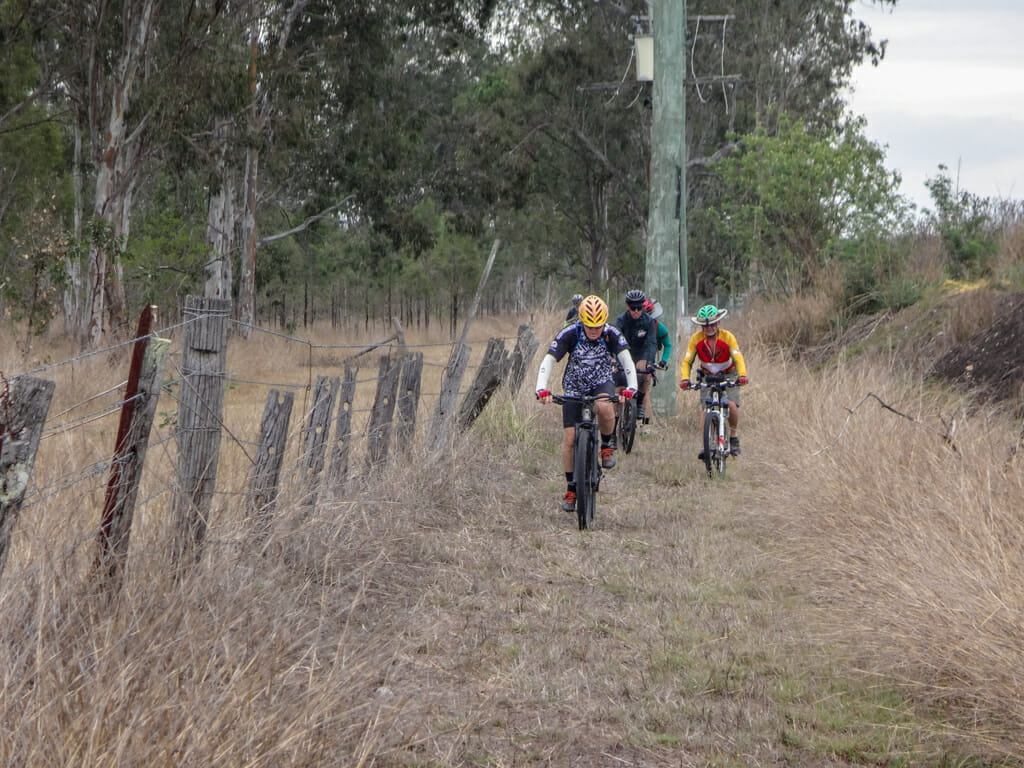 These days, the roads near the RAAF base are quite busy.

Rather than risk our lives on the busy highway, we took a detour under the Warrill Creek bridge and through the roadside grass towards Middle Road. 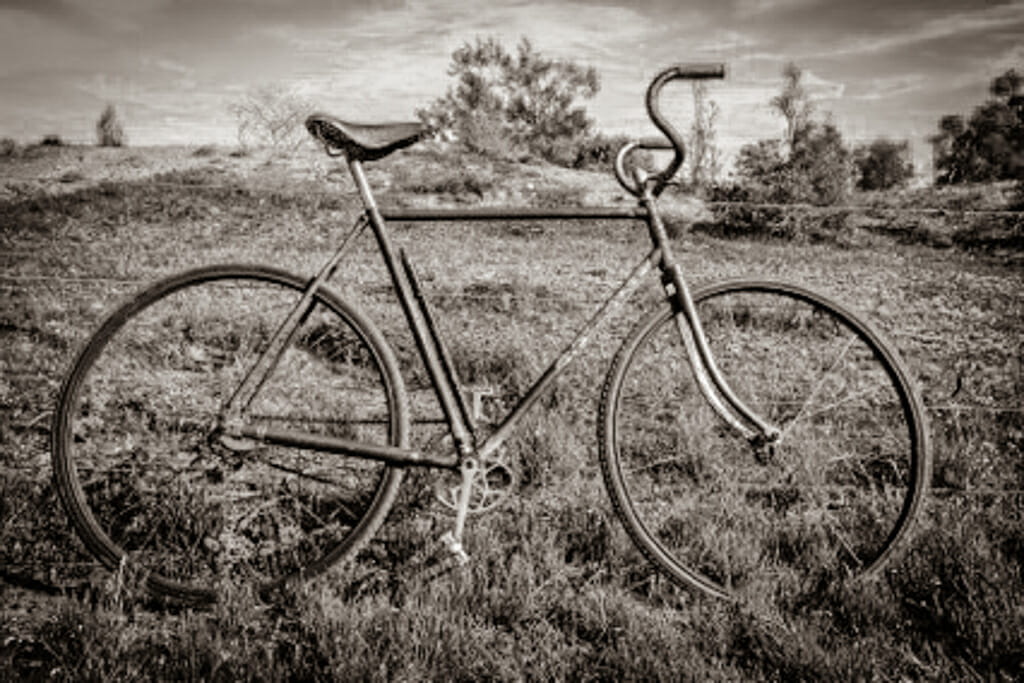 Our young Air Cadet hero didn’t have a fancy bike with gears or suspension like we did.  He just had a single-speed bike with a solid steel frame and pedal-brakes.

Bouncing through the grass and dirt would have been much tougher for Les. 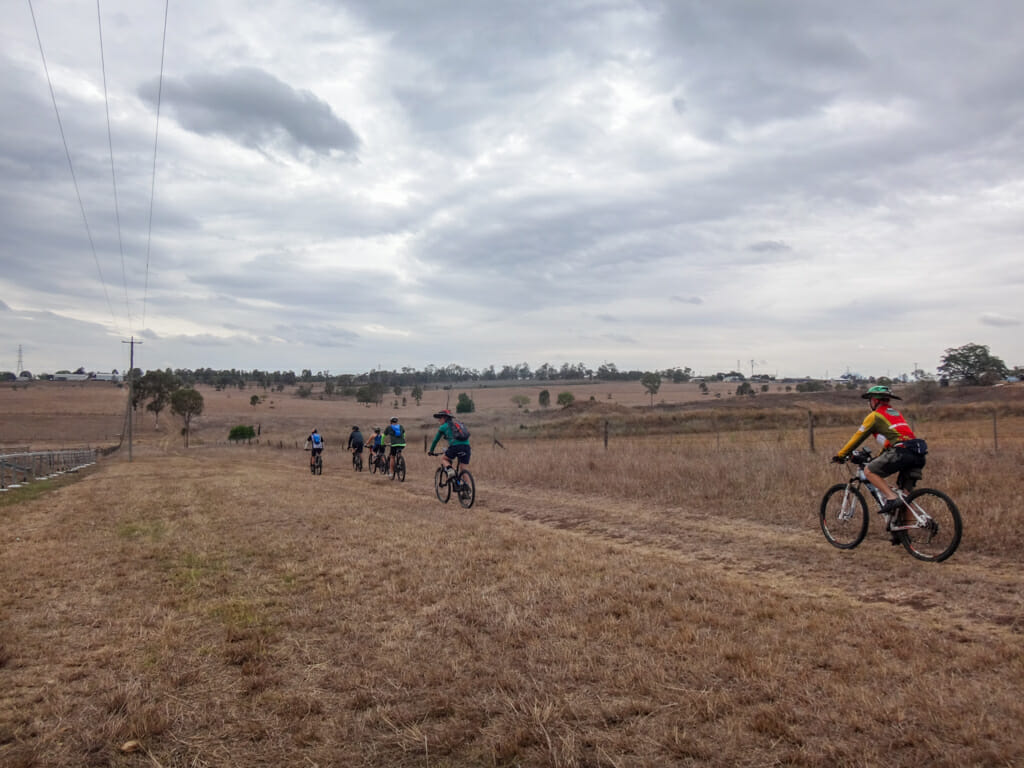 We rode our “armchairs on wheels” along a quiet road reserve between farm paddocks on Stevens Road. 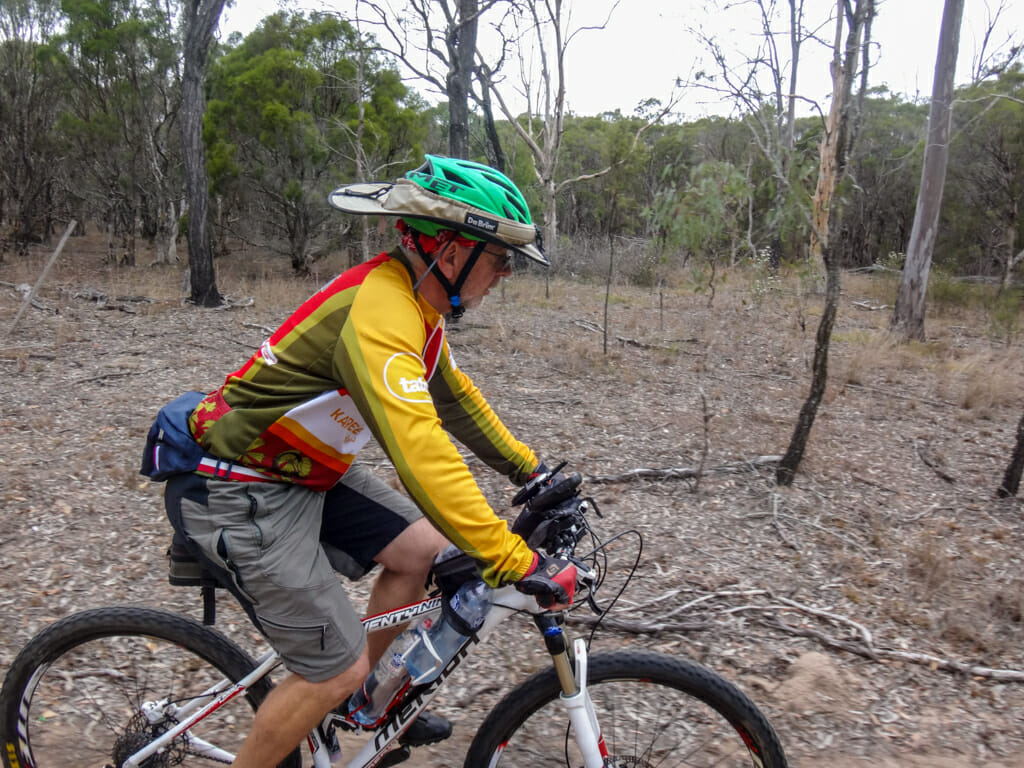 Russel tells me that sometimes his Dad wouldn’t return home until late at night after an all day ride to Ipswich and back.

I couldn’t imagine riding some of these roads in the dark like Les did. 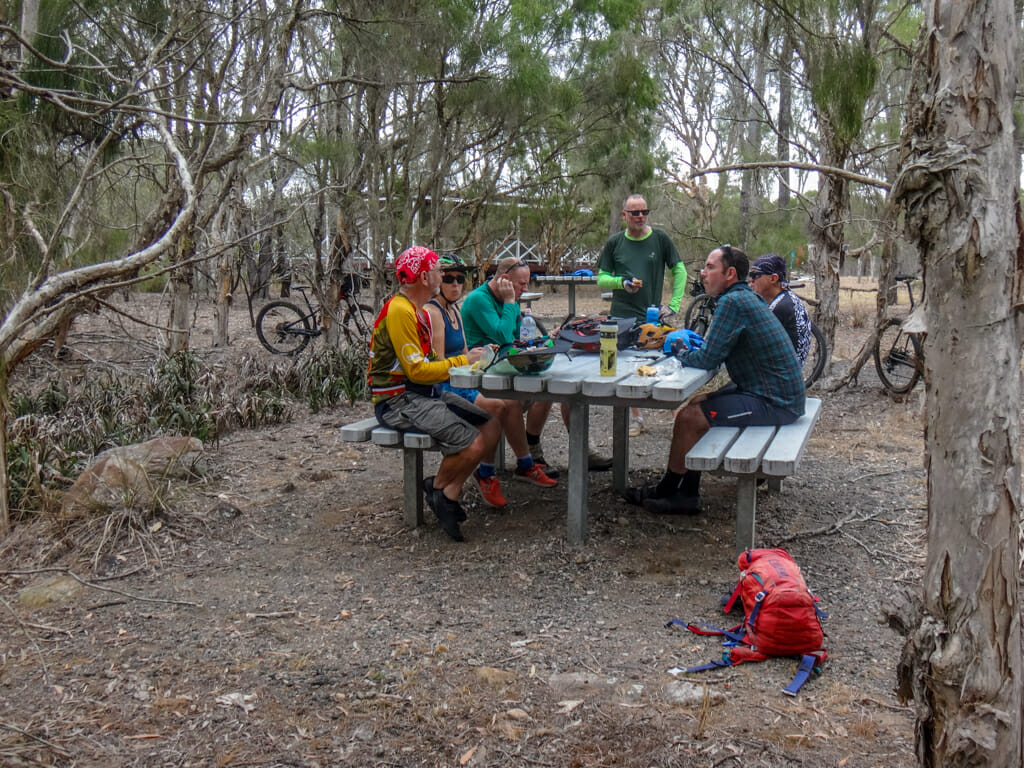 We stopped at Purga Nature Reserve for morning tea.

This beautiful little park contains remnant forests of paper-barks and she-oaks, and gives us a good picture of what the landscape would have been like around the time Russel’s ancestors moved out here to farm the land.

Les’s strategy of wearing his uniform in public eventually paid off.

A beautiful young lady named Melba was impressed with our young cadet hero, they fell in love…

…and were married a couple of years later. 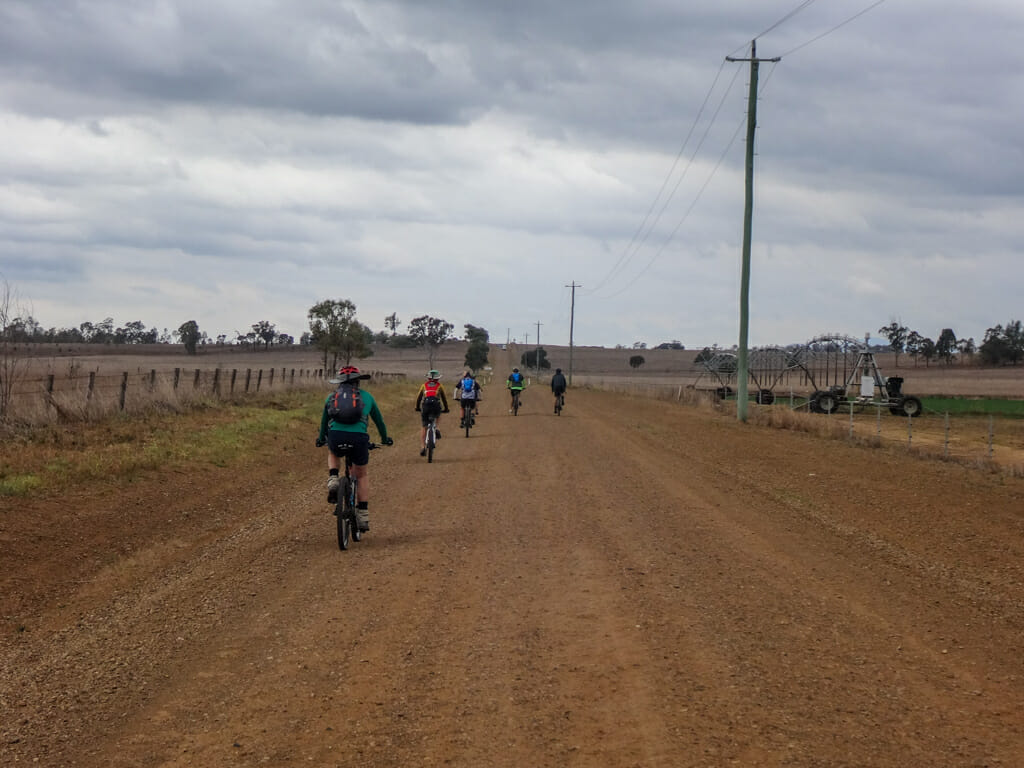 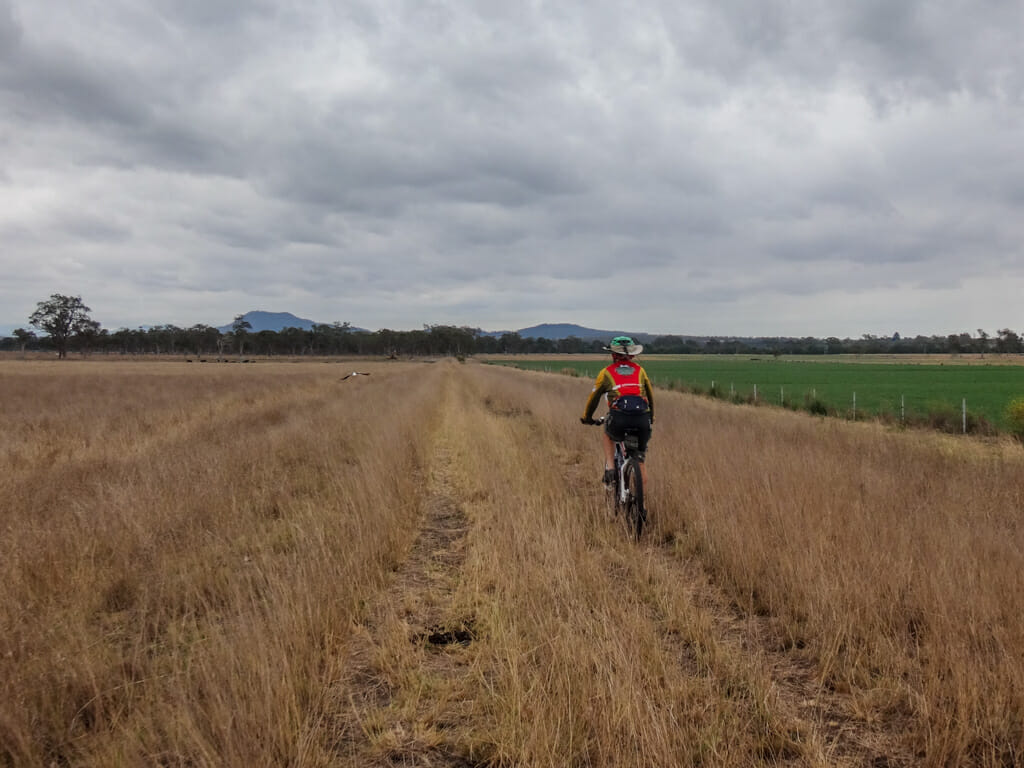 Russel tells me one of his early memories was riding in the car with his parents, taking his aunt to the railway station at Boonah to catch the train back to Brisbane.

The railway tracks are no longer there, but the land easements still exist if you know where to look.

We followed one old section of the Fassifern Valley railway line towards Harrisville. 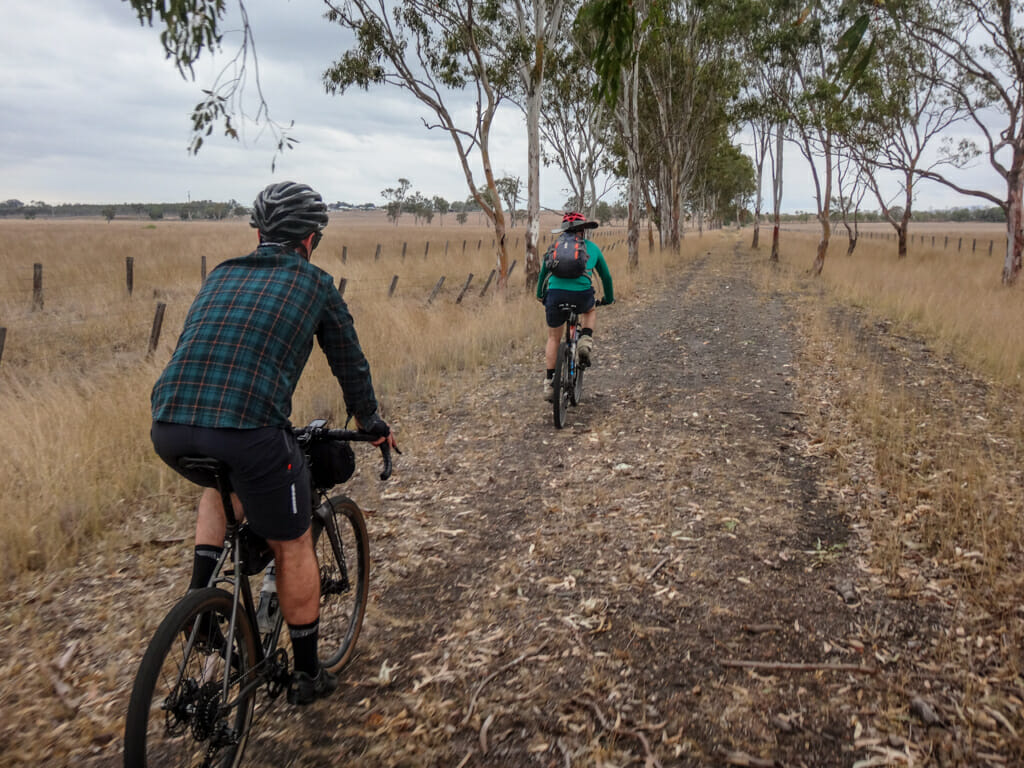 When the railway line was closed, some farmers purchased the vacant railway land to use as paddocks.  Others declined the offer.  The end result is that today there are a series of disconnected public-access railway easements throughout the Fassifern Valley.

The rain started falling more heavily when we arrived in Harrisville, so we took a break on the verandah of the local pub for a quick drink and snack. 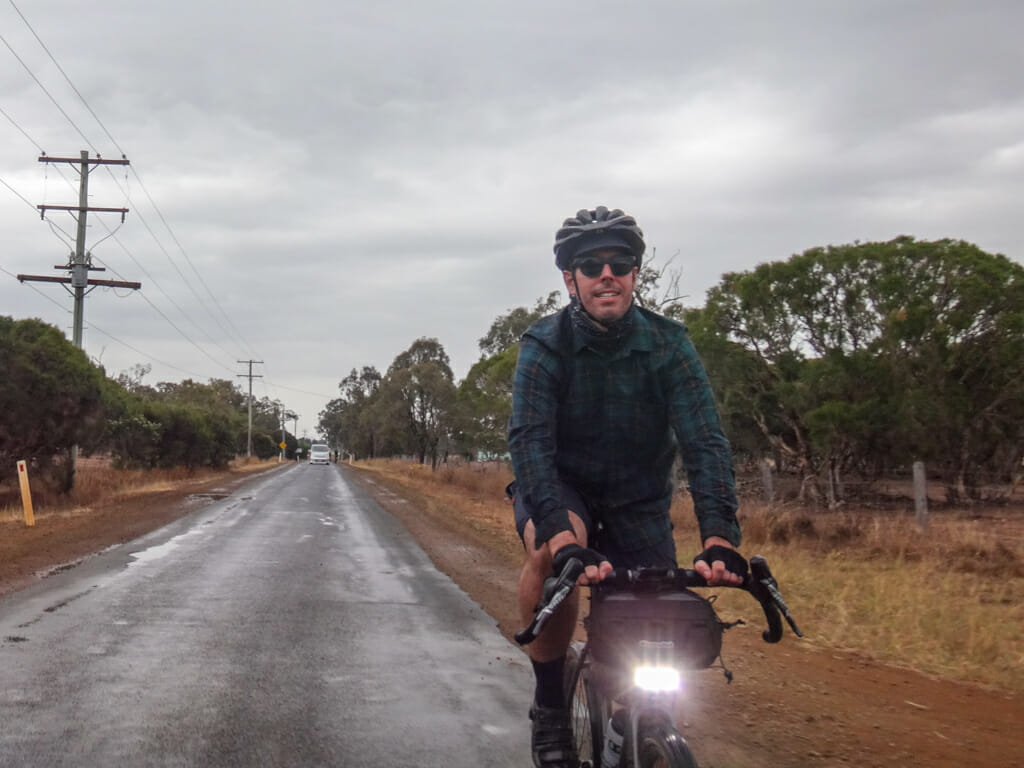 After the rain stopped, we left the shelter of the pub and kept riding south towards Kalbar.

Kaye almost ran over a couple of skittish Kangaroos. 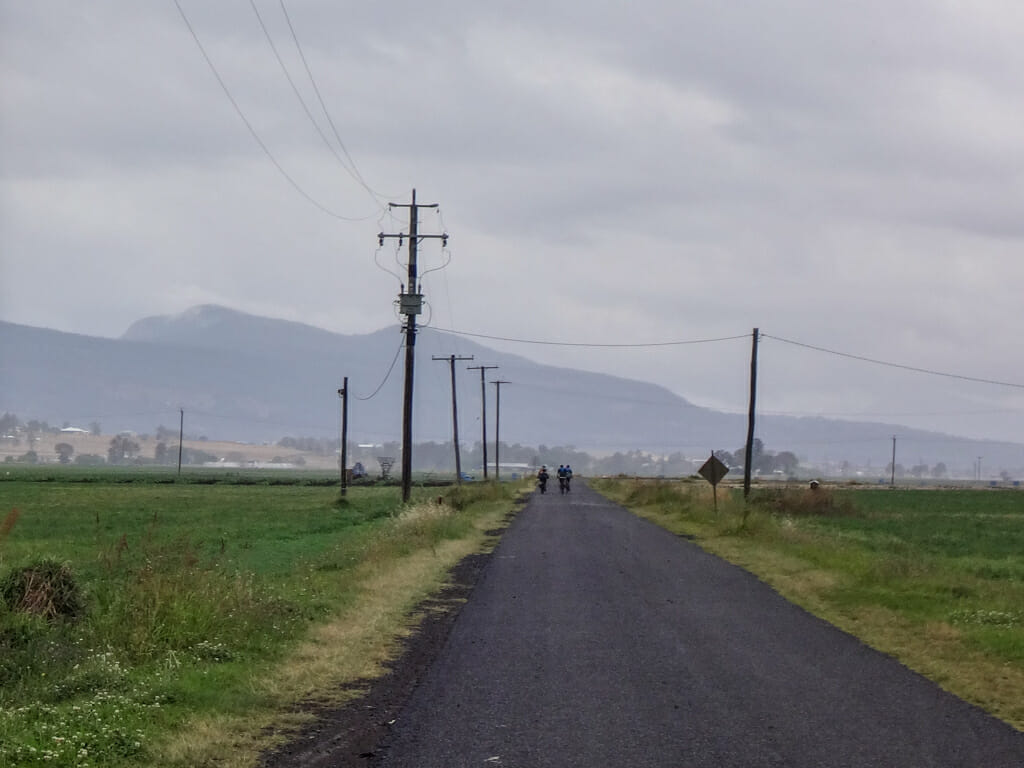 As we followed quiet damp roads southwards through happy green paddocks, the shadow of Mount French loomed larger in front of us. 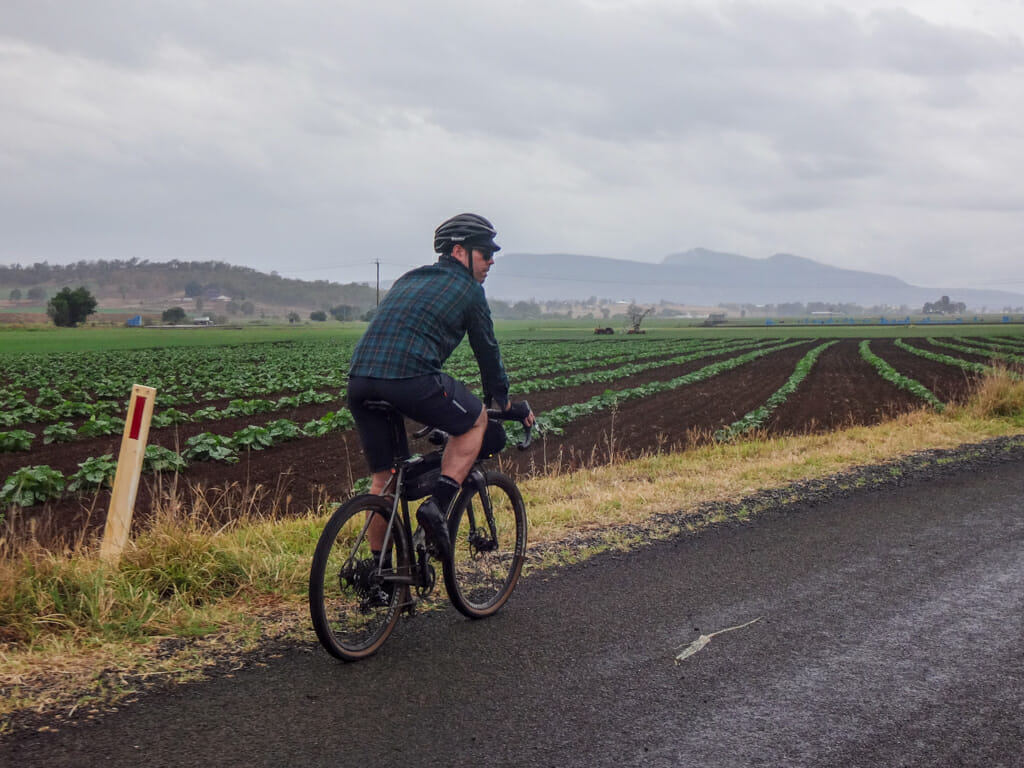 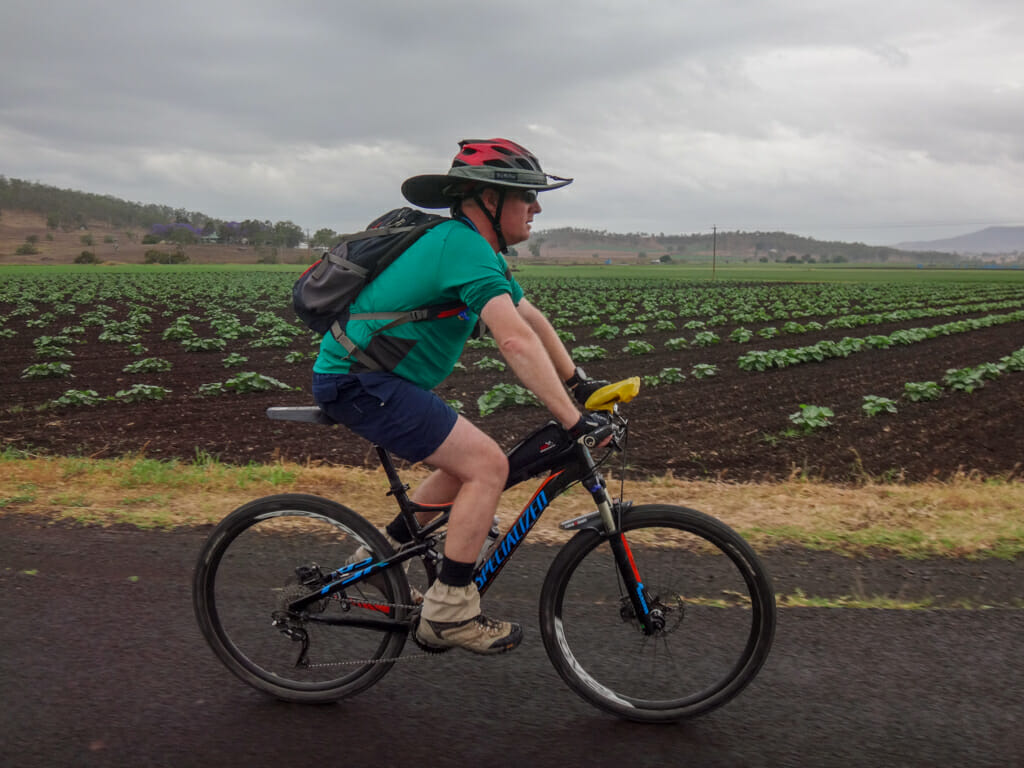 Rows and rows of vegetables lined the fields either side of us.

I understand why farmers smile whenever it rains. 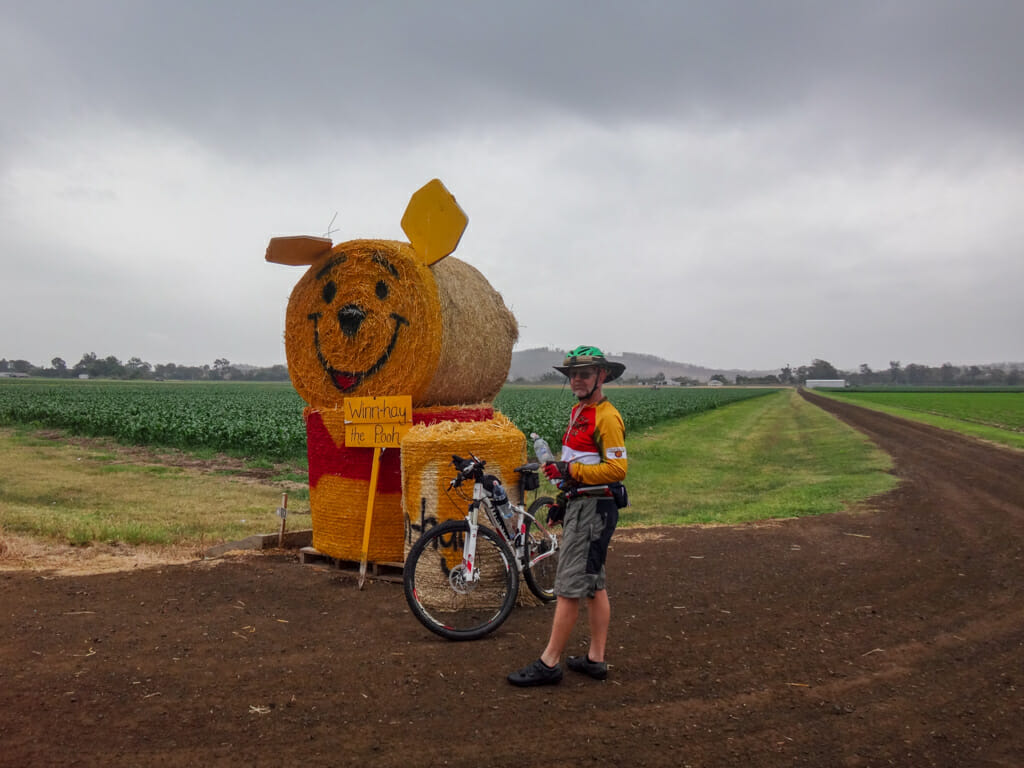 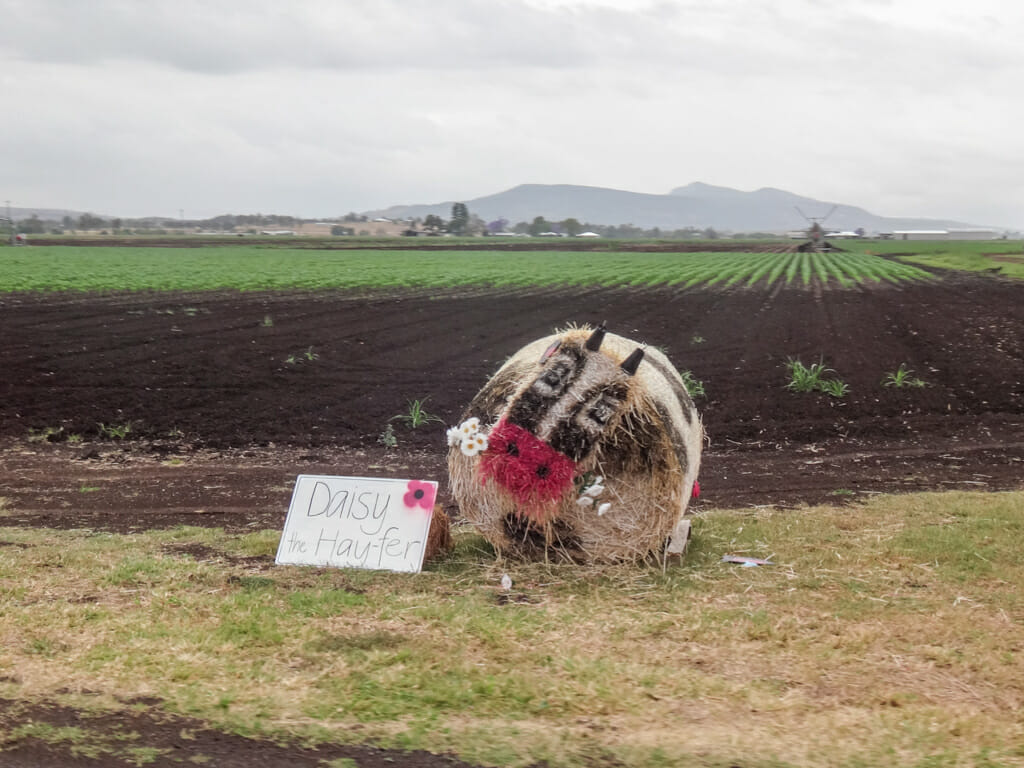 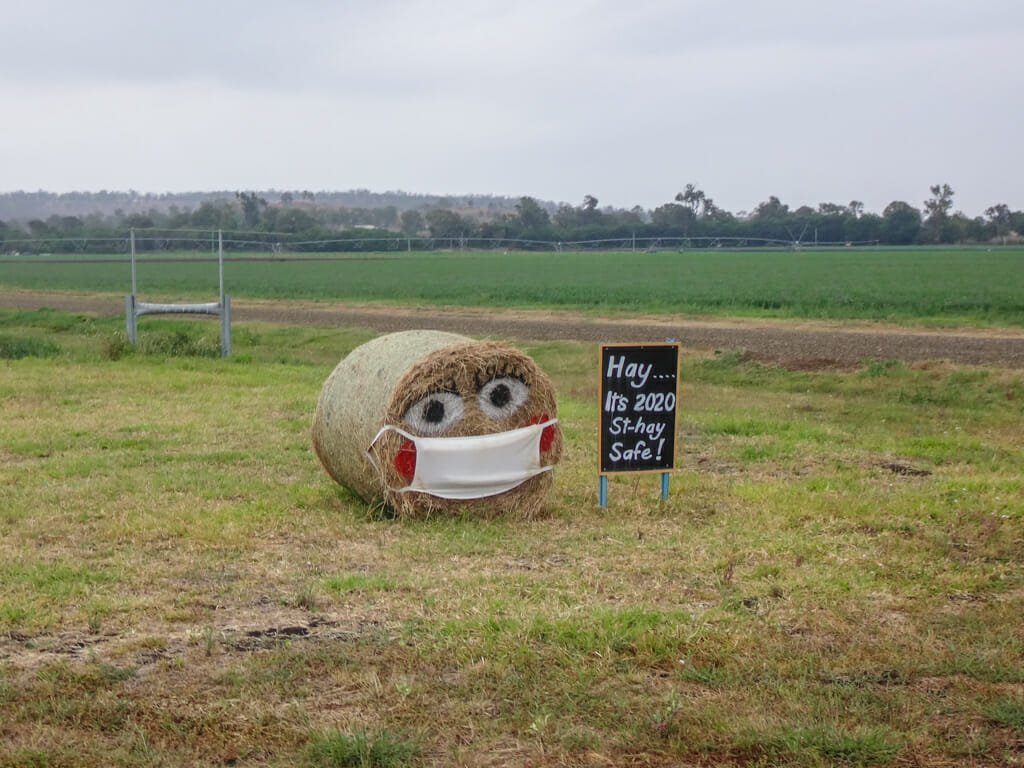 Some of the locals had made roadside sculptures out of hay for Kalbar Country Day.  “Winn-hay the Pooh” gazed optimistically at us as we rode by, so we stopped to admire someone’s handiwork.

For ages, “Making Hay” has been an important task for any farmer with Livestock.

When Les married Melba, he share-farmed on her parents dairy farm for ten years before taking it over in the 1960’s.  Every year he’d slash the grass, then collect and bail it, so the cattle would have food during the dry months…

There were often dry months, and sometimes even dry years when droughts took too long to break. 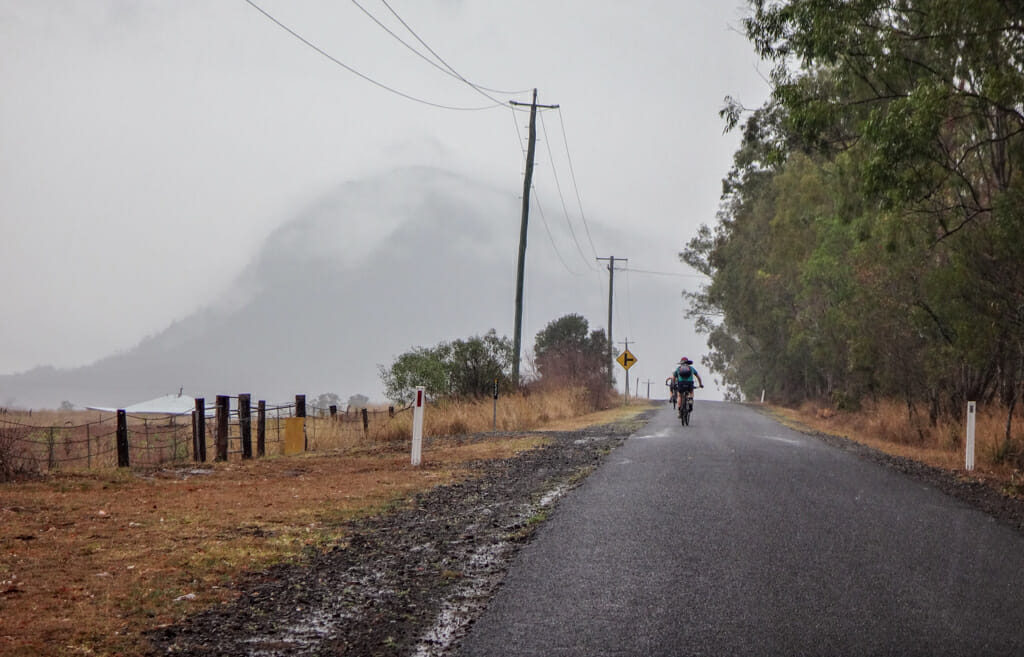 Mount Edwards was shrouded in cloud and mist as we neared Russel’s childhood home,

I put on my rain jacket to keep the rain out.

Rain jackets are a mixed blessing when you ride a bike.  They keep out most of the rain, but if you work too hard, it’s easy to overheat and perspire.  So you end up getting wet from sweat instead of rain.

To counter this, I slowed down and took it slowly.

Why not? It’s a pleasant experience to ride on a damp day. 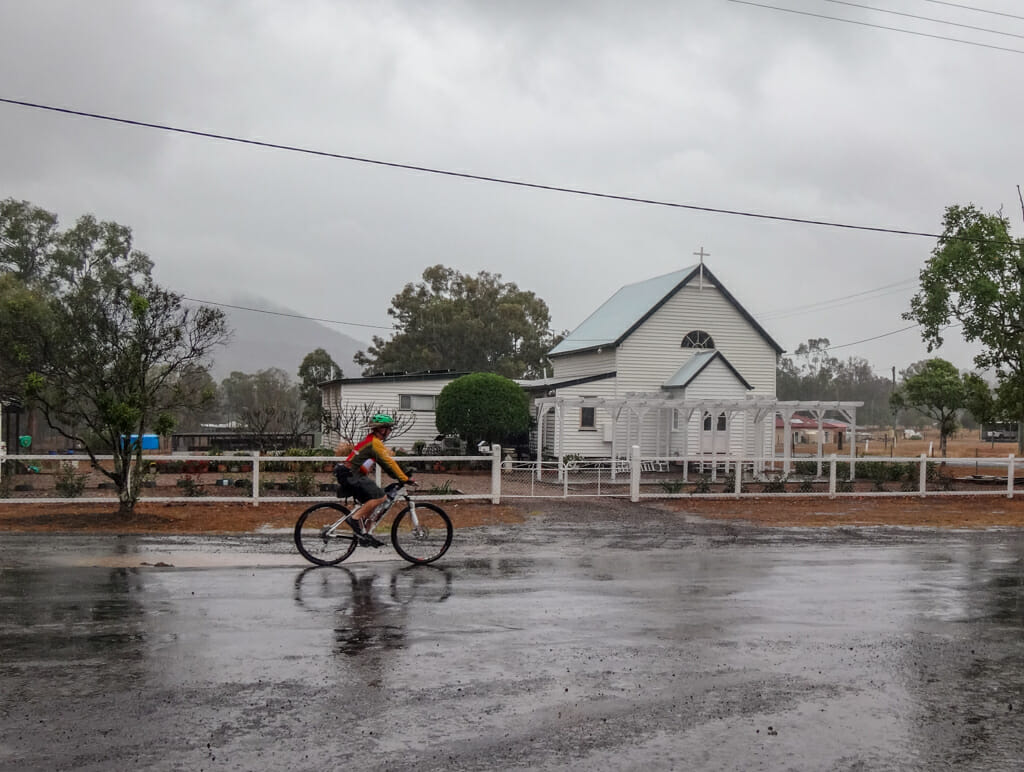 At Aratula Russel pointed out the old Lutheran church which appears in the photo of Les on his bike at the top of this article. 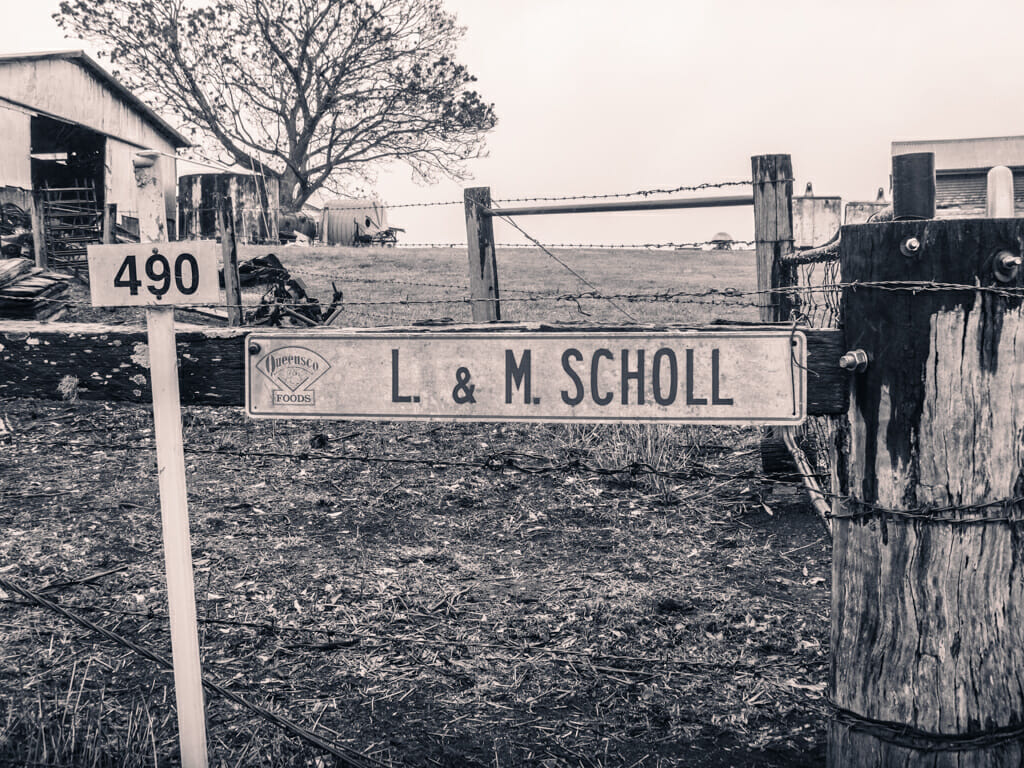 A few minutes later we arrived at Les and Melba’s front gate. 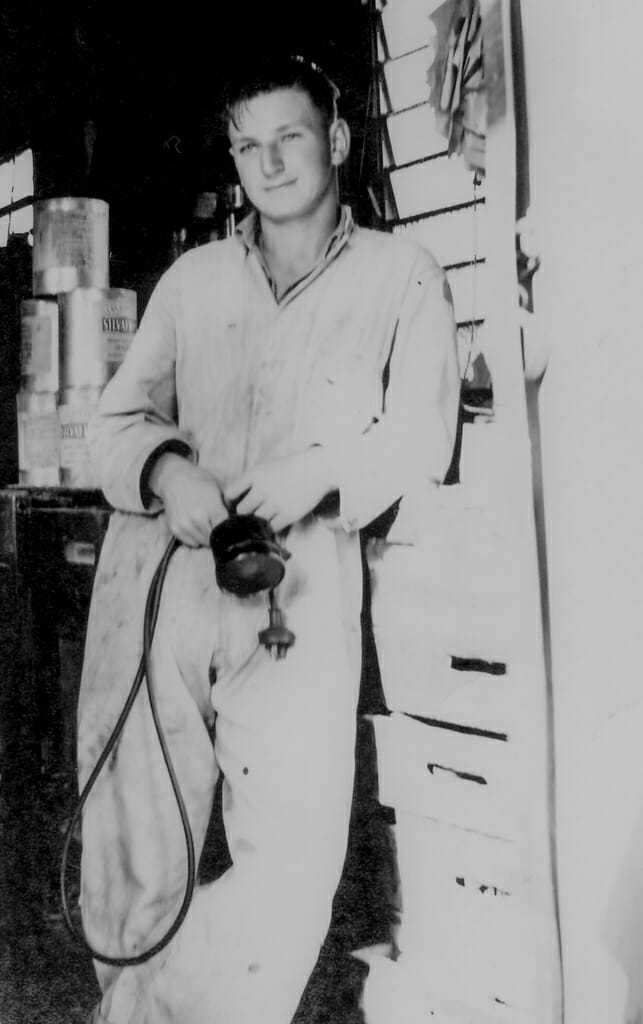 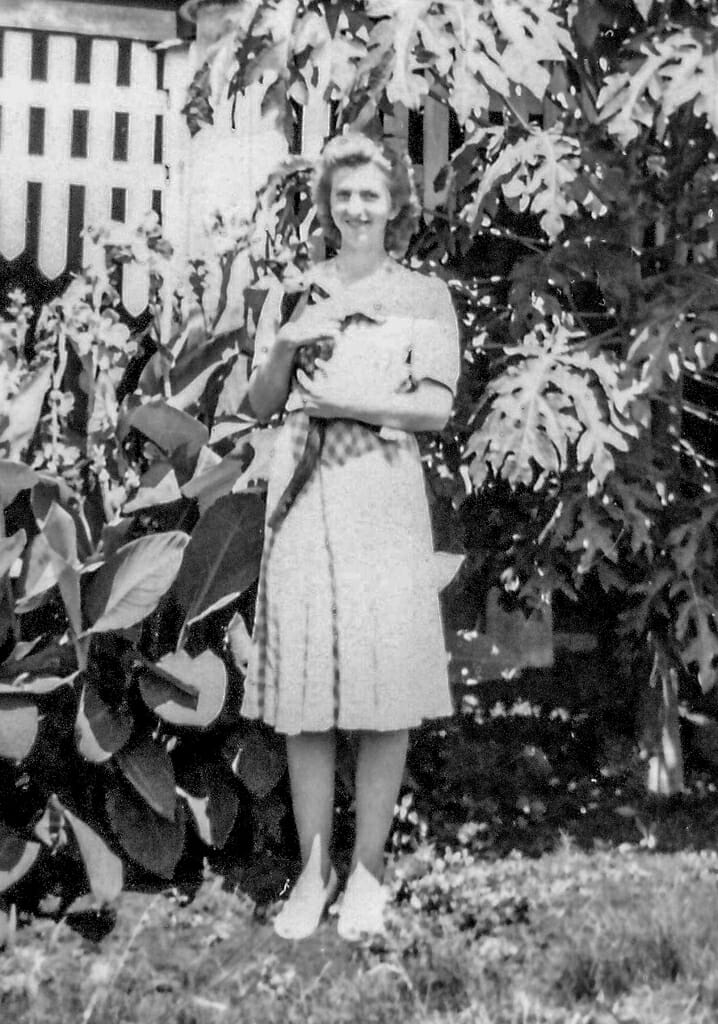 The cheeky air-cadet and his beautiful wife were married for sixty-five years.

They had four kids. 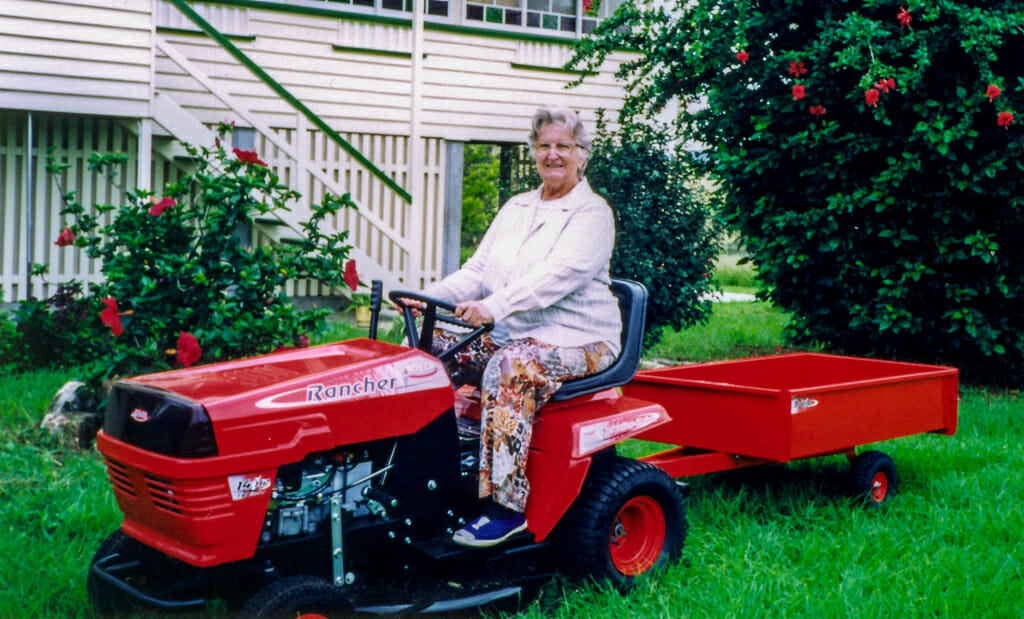 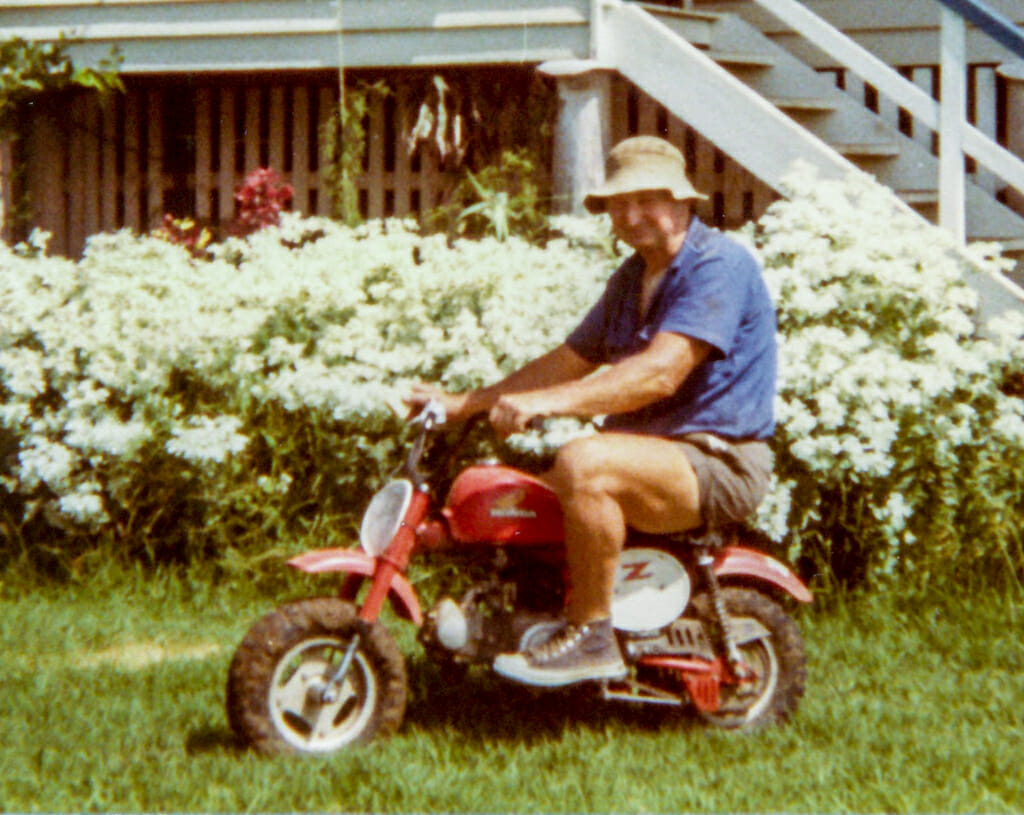 It looks like they also had a lot of fun!

We rode about seventy-five kilometres in just under six hours including breaks. In the cool damp weather it was an easy and pleasant ride which rates 6.5 out of 10 on the tough-o-meter.

I’m told that Les did it in a much better time than us on his single-speed bike – but I’m also told people from that era were super-human.

Thanks to Russel and the Scholl family for the old photos.

Thanks also to Adam, Kaye, Justin, Peter, John and Simon for a fun day out.

And to Les and Melba, wherever you are, congratulations on finding happiness, and building an amazing life together.

8 Replies to “Les and Melba”