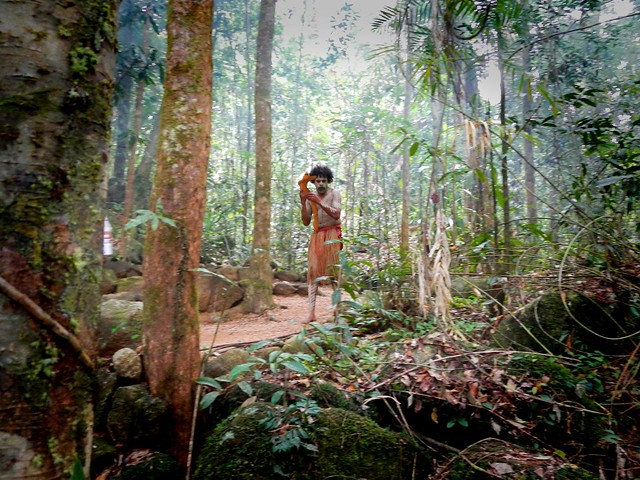 Mossman Gorge is part of the traditional country of the Kuku-Yalanji Aboriginal people. We spent a few hours exploring this area with an Aboriginal guide as part of a small group tour organized via the Mossman Gorge Centre. The gorge is a popular destination for tourists, but the problem is that there isn’t anywhere to park at the end of the road where the gorge starts. So the Mossman Gorge Centre was built further back towards town with a huge car park, and regular busses that run every 15 minutes to take visitors up to the gorge, without having to hassle about where to leave the car. 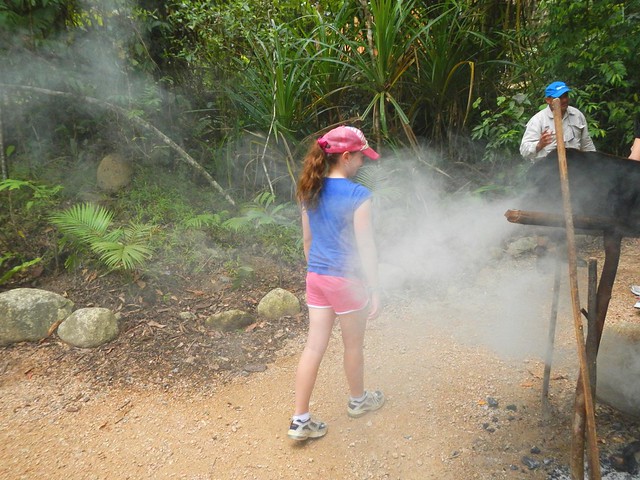 We started our walk with a smoking ceremony. This is a traditional way of welcoming visitors and protecting them from harm during their stay. Everyone walked through the smoke before walking into the forest. 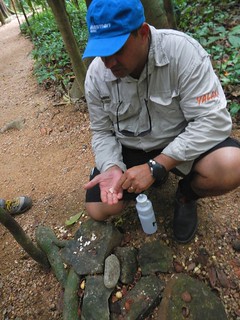 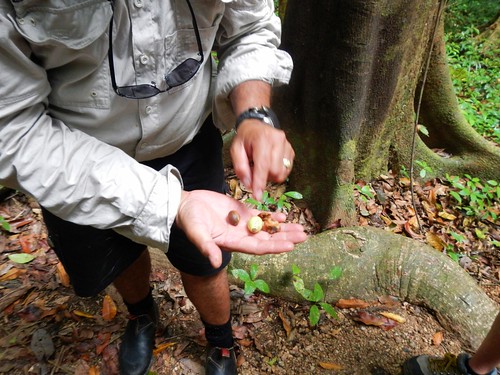 The rainforest is full of delicious food if you know where to look. Rodney, our guide, showed us some things we could eat, and ground them up for us one some stones which had been in use for centuries. We could still see the dents in the stones where nuts had been ground many times before over hundreds of years. 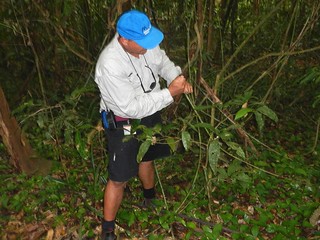 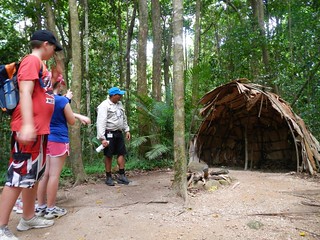 He also explained how the plant we call “Wait-a-while” was so important to his people. While we think of it as a prickly pest, it was essential in providing struts for building shelters. The spiky tendrils were useful for hunting snares and fish traps. The longer sections of cane could be cut open for drinking water, and it could also be used as a climbing aid for scaling tall rainforest trees. 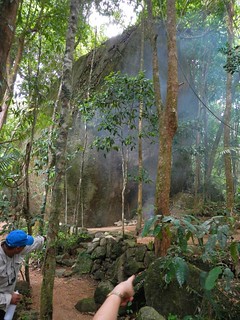 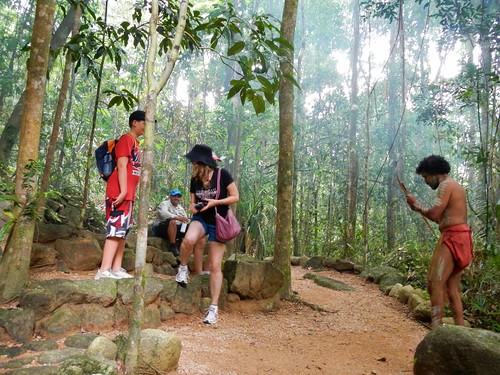 When their ancestors came to rainforest, they didn’t know what they could eat. A good spirit named Kubirri came to them in the form of a man. He showed the people what they could eat, what things were poisonous, and how they could prepare other foods so they would be good to eat, and not harmful. Because of Kurbirri, the Kuku-Yalanji had lots of food and were happy. 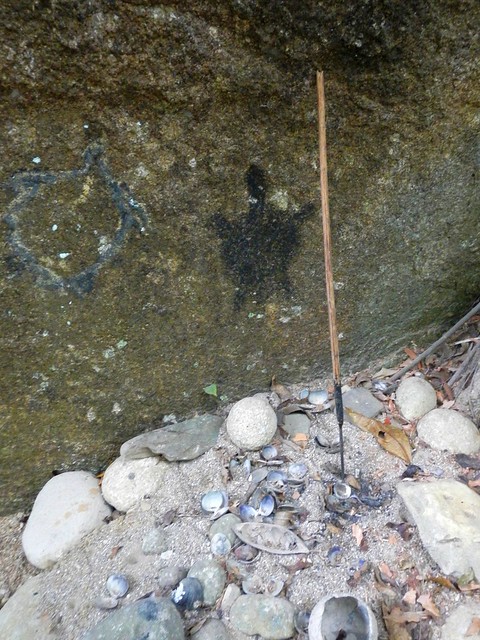 At the rock shelter we got to see some old rock art. Rodney told us this painting of a turtle was thousands of years old. 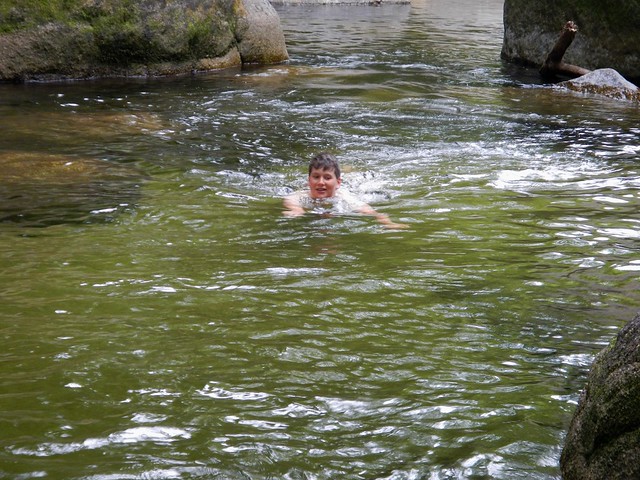 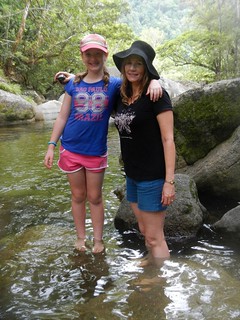 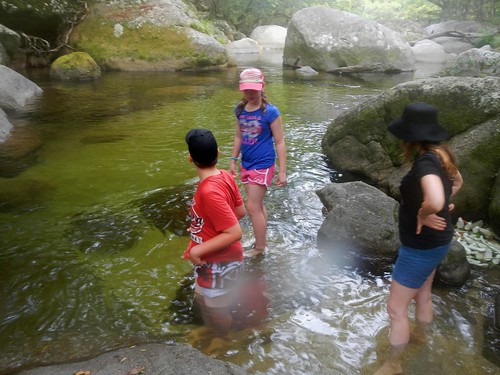 Partway through the tour, we got to spend half an hour or so splashing around in one of the crystal clear rock pools, in one of the creeks that feeds into the Mossman River. 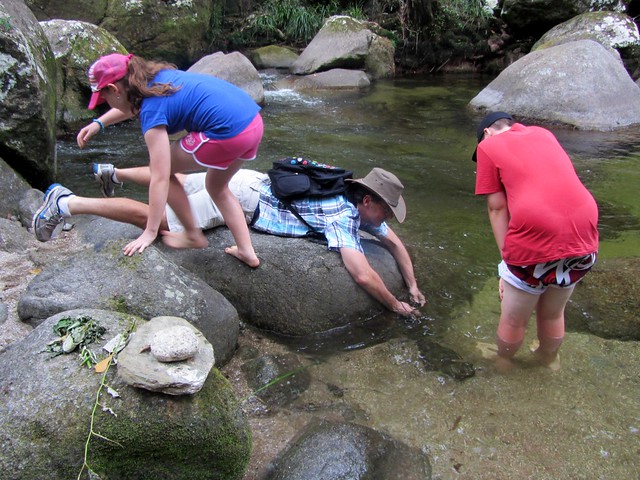 Rodney said the water was about as pure as you could find in the wild, so I thought I’d taste it to see for myself. I agreed with him 🙂 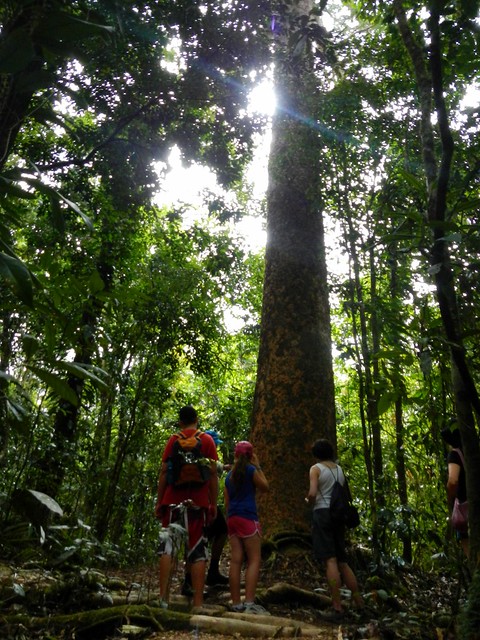 After that, we slowly wound our way back through the forest for some afternoon tea and a didgeridoo concert.

Can you hear the sounds of Kookaburras, Crcodiles and Kangaroos in his playing?

If you’re visiting Far North Queensland, Mossman Gorge is a “must-do” destination. If it’s your first time, make sure you book a tour so you can experience this wonderful culture first-hand.