With few days remaining till I had to undergo major surgery, I decided to take the day off work and go for a big ride through wide-open spaces while I was still able. 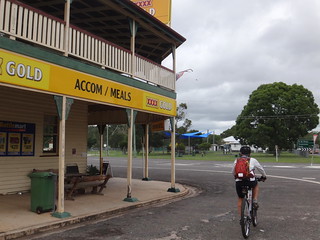 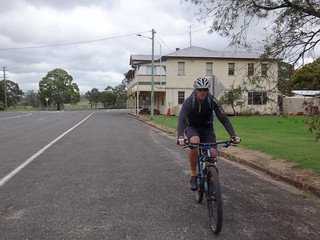 Early on a Friday morning we parked the car outside the pub in the quiet South Burnett town of Cooyar and headed for the hills. 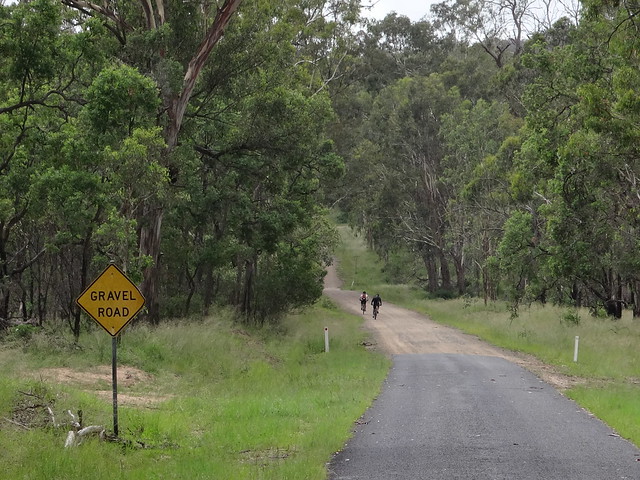 We followed the road out of town as it gently climbed the range until we reached the end of the bitumen. 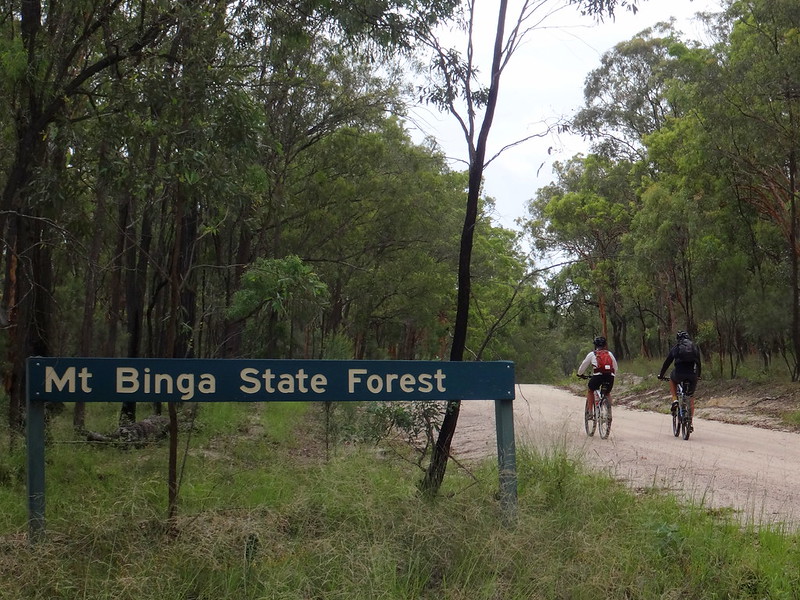 Mount Binga State Forest / National Park is a two to three hour drive from Brisbane, about halfway between Toowoomba and Kingaroy. 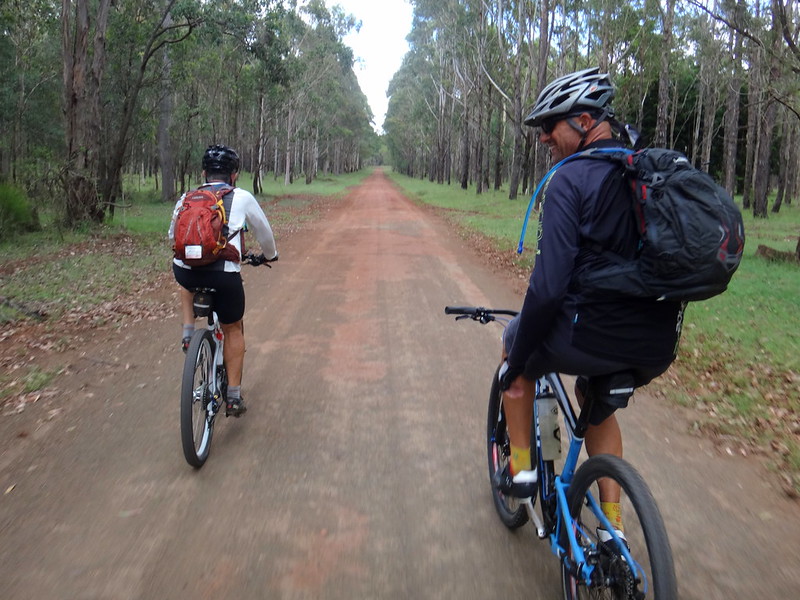 Regardless of new routes, Paul and I were just grateful to be out in the bush on a weekday rather than at work 🙂 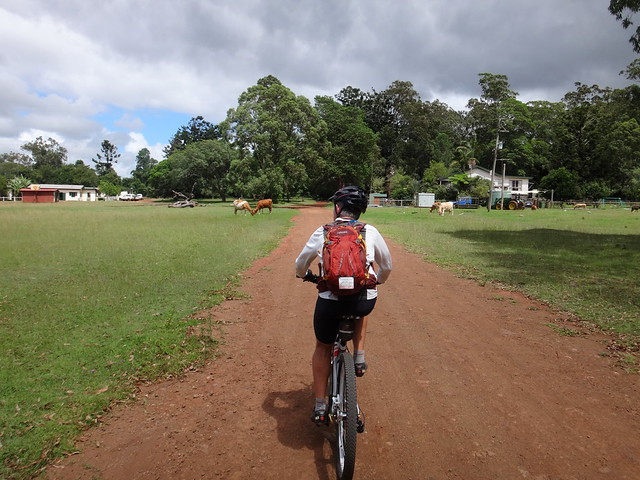 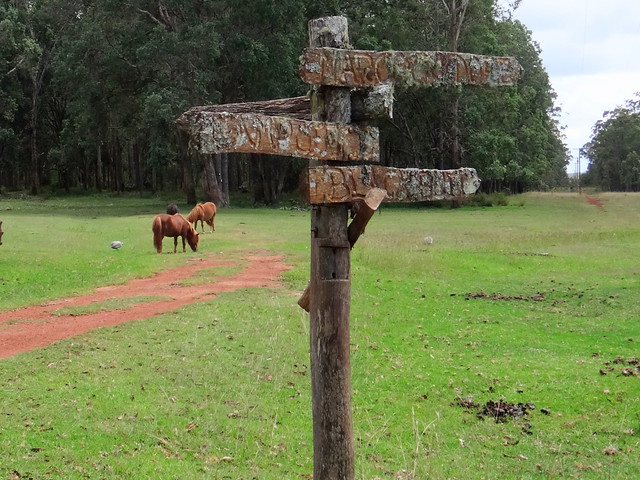 We passed through the Mount Binga Outdoor Education Centre and said “G’day” to some contented ponies grazing on the green grass. Moss-covered signs pointed off at strange angles to barely visible destinations. Sitting ontop of the Blackbutt Range, this looked like the perfect place to “get away” from it all. 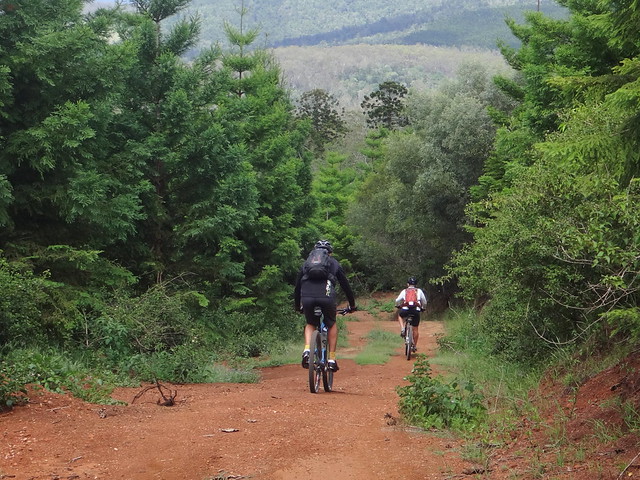 We rolled down the range into some plantation forests. 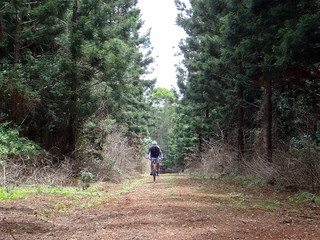 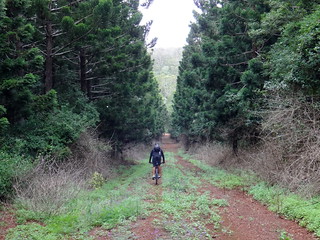 The terrain through here undulates constantly, so we spent most of our time either grinding up hills or rolling down the other side…

Bustling ants nests cluttered the dirt tracks. I squatted down to have a closer look at this miniature metropolis and ended up with an angry ant trying to bite the end of my finger.

Paul had the right idea and kept on pedalling. 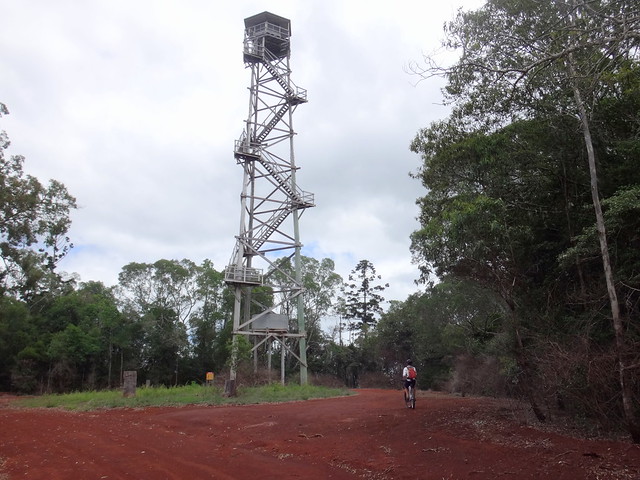 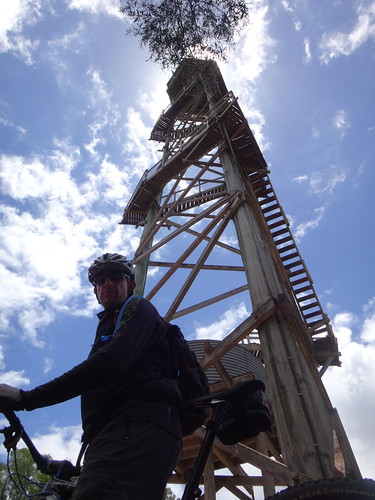 We eventually reached the summit of the ride at the Mount Binga Fire Tower. We’ve visited a few fire towers in our time, including one that had disappeared. We didn’t try climbing this one because the stairs were missing and large warning signs warned us that it wasn’t safe. 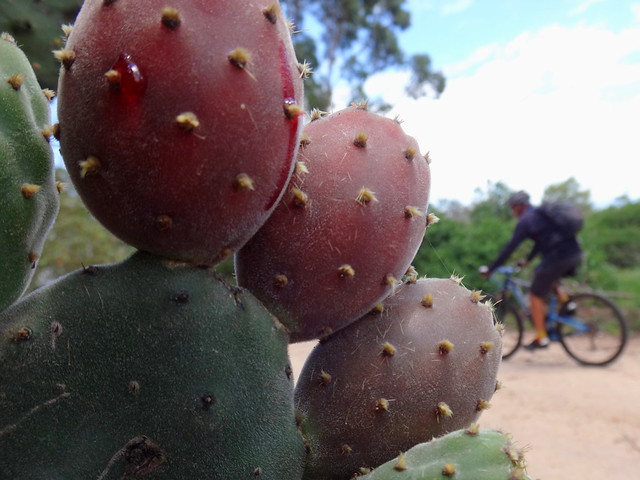 The road past the fire tower was mostly downhill. I was surprised at the number of prickly pear bushes we encountered on the way out. These plants are noxious weeds which I thought had been brought under control by the introduction of the cactoblastis beetle, but it looks as though tree-sized infestations still persist in some places. 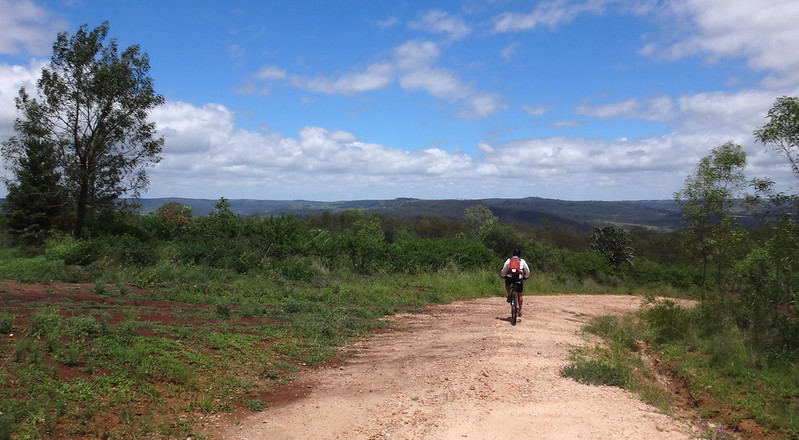 We dropped out of the forest under towering skies onto endless plains and bushland rolling westward – a patchwork quilt of green. 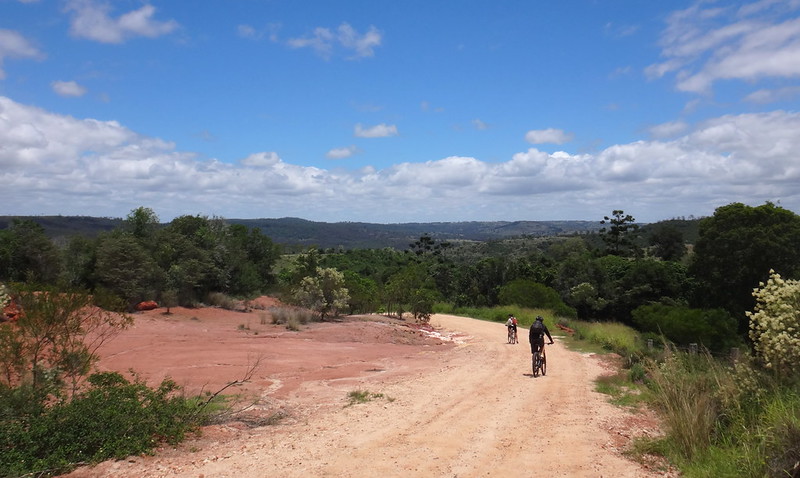 As I soaked up the panorama I remembered that this would be one of my last big rides for quite a few months. It takes a long time to recover from knee surgery. Today I was sure we had come to the right place for a ride. We hadn’t wasted the opportunity, we had made the most of it. 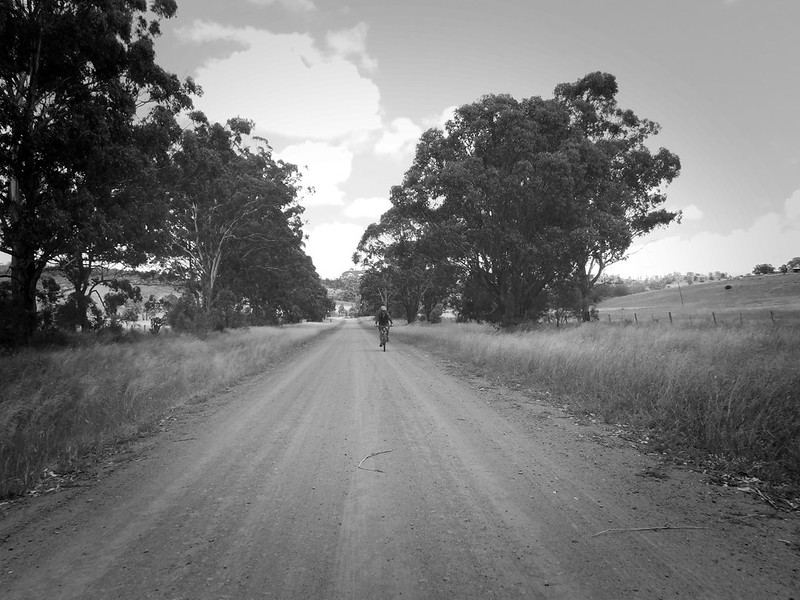 The hilly tracks flattened into rural gravel roads – an archetypal Aussie backroad that could have been anywhere on this vast continent. 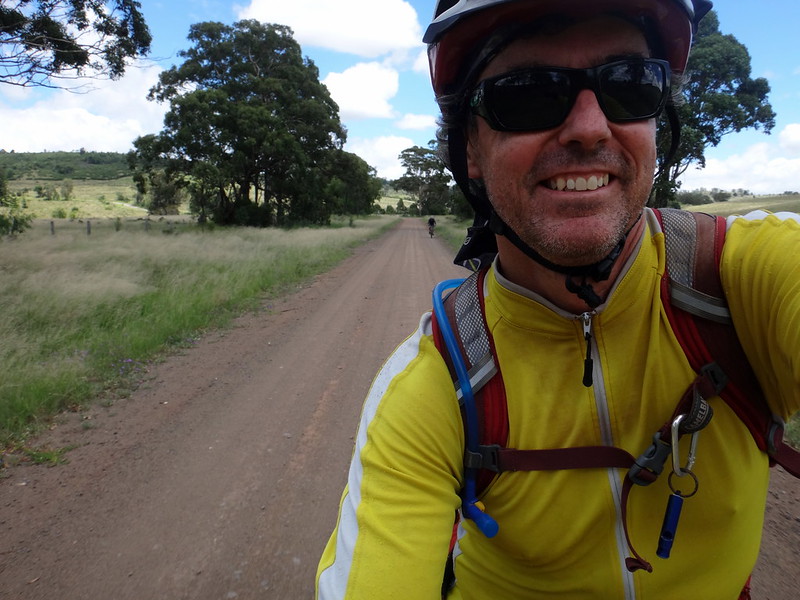 “Bloody beautiful” I blurted out while grinning like an idiot. Where else would you want to be? 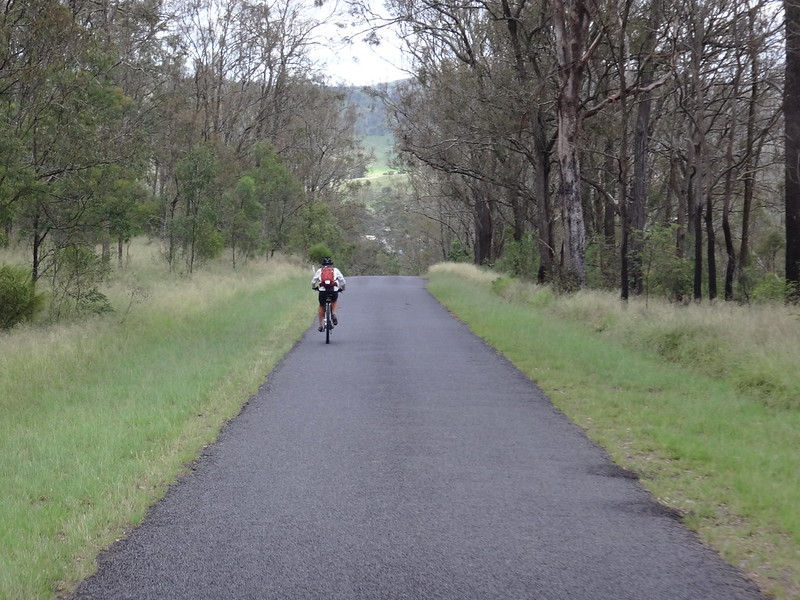 The last couple of kilometres were a blisteringly fast descent down the paved road back into town.

I tucked in and got the bike up over 70km/h as I followed Eric down the hill. What a fun way to finish a ride! 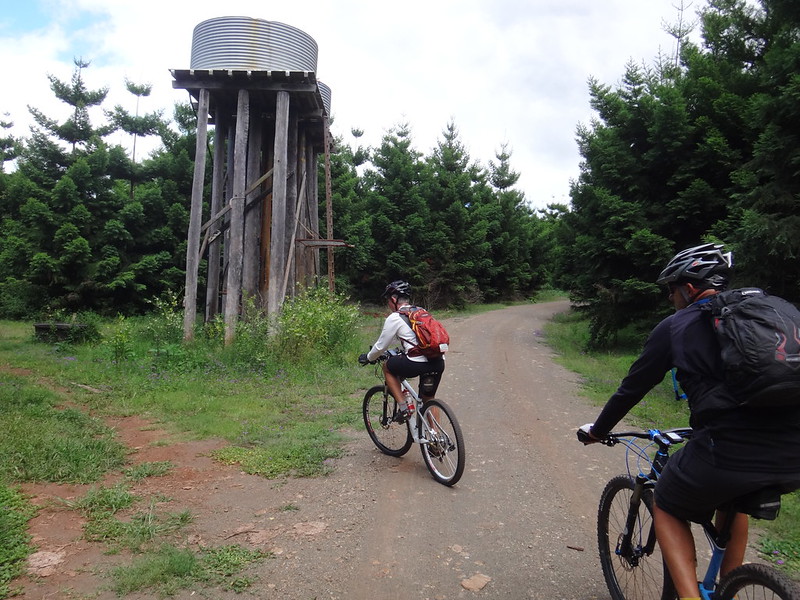 We rode a total of 44km in three and a half hours including breaks. During that time I burned 1800 kcal as we climbed about 1,200m.

I’ll rate this one 6.5 out of 10 on the tough-o-meter. It’s an easy pleasant ride with one or two hills in it to keep you honest.

The bakery in Yarraman does tasty pies and has a great looking mountain bike hanging on the wall.

Thanks Eric and Paul for a memorable ride!