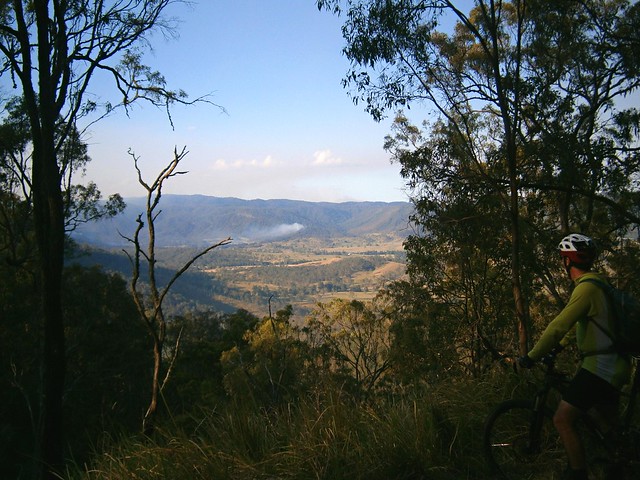 Mount Kilcoy is a small farming community in a secluded valley bounded on three sides by the Conondale Range. I was curious about what it would be like to ride from there into the hills to the north, so I convinced a couple of friends to join me. 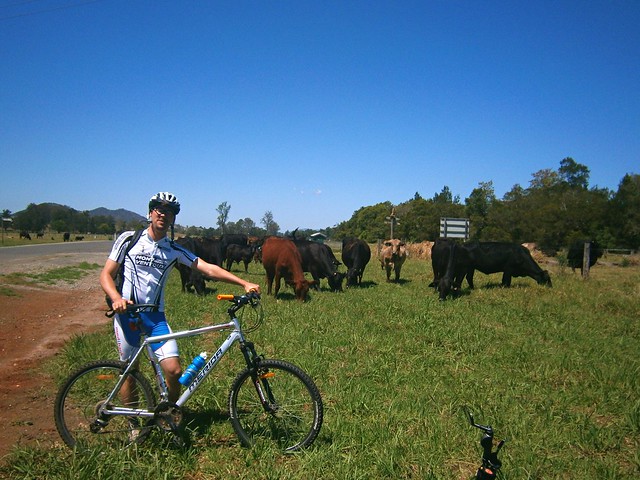 Jason, Wil and I started our ride surrounded by contented cattle grazing on the lush grass. This place has known severe drought in the last decade, so it was really nice to see so much green grass and flowing water. 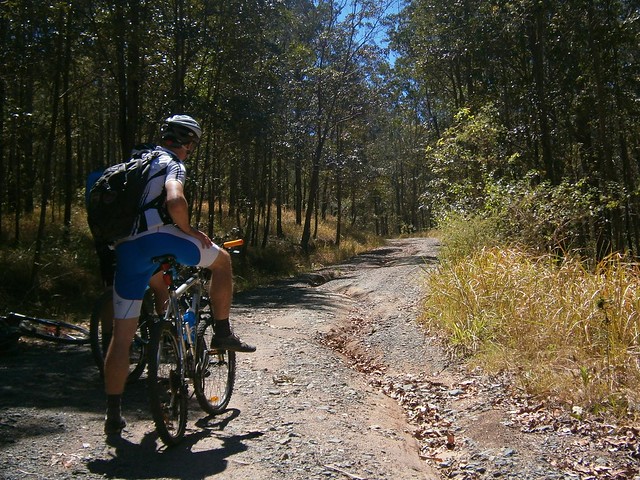 After a few easy kilometres warm-up along Mount Kilcoy Road, we eventually reached the national park boundary. From here, the gradient increased sharply, and we had to start working quite hard. Wil made the mistake of munching on a couple of meat pies before the ride. He regretted that half-way up the 5km climb. 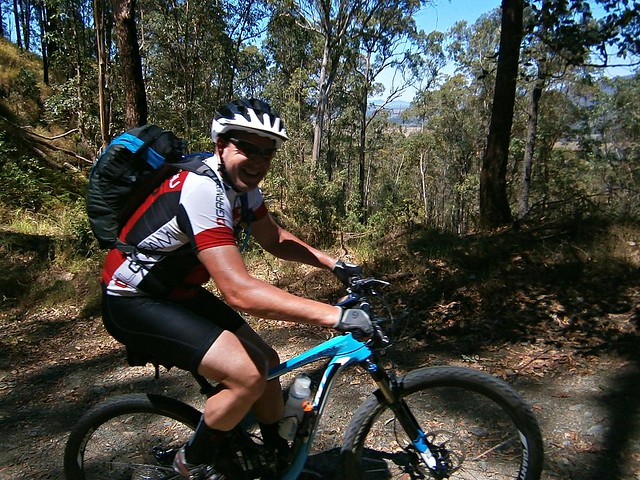 We climbed about 450m in 5km as we wound our way up the range. Hill climbs are a fact of life in mountain biking, so we just sat back, pushed the pedals, and slowly made our way to the top. 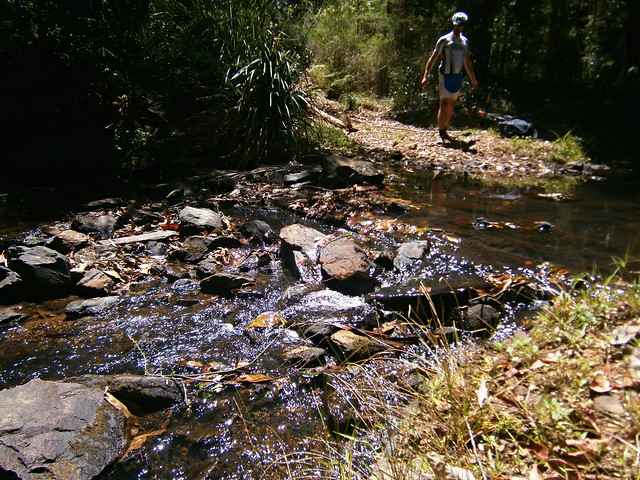 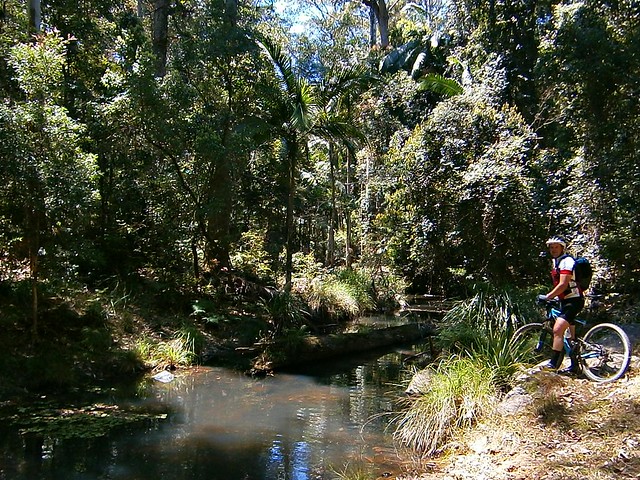 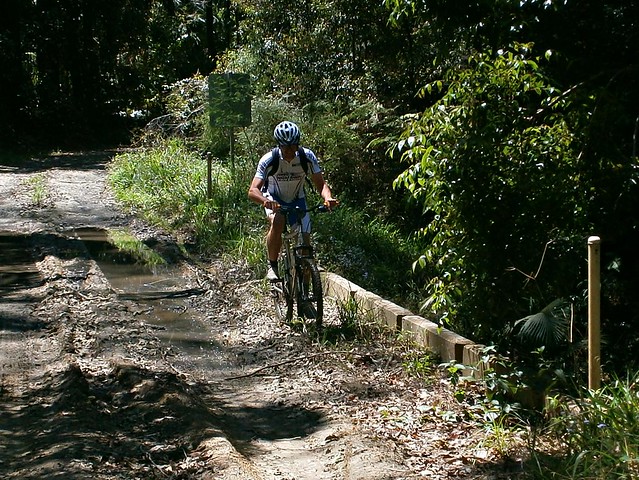 I’m glad we did most of the hard work at the start. From that point our route undulated northwards over the mountain range as we crossed several picturesque creeks. The creeks in the western section of the Conondale Range drain into the Stanley River and Somerset Dam, eventually flowing into the Brisbane River and Moreton Bay. 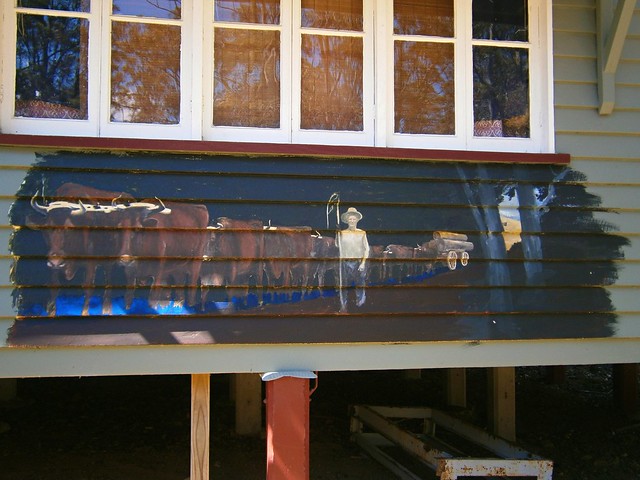 At the half-way point of our ride we reached the Sunday Creek Environmental Education Centre (EEC). This wonderful facility is run by the Queensland Education Department to provide Environmental Education to our kids. One of the walls of the centre has a mural based on an old photograph of Alf Raung and his bullock dray. Alf used to work his bullock team between the logging towns of Yednia and Jimna. In the early 20th century, the Conondale Range was logged for its magnificent timber. In fact, the EEC is situated where an old sawmill use to be. Some of the buildings used to form part of the sawmill. Alf Raung would collect the huge logs that timber getters had felled. After loading them on his dray, the team of bullocks would haul the heavy load to the sawmill where it would be cut into planks.

In a strange twist of fate, Alf’s grandson, Michael is principal of the EEC.

Before the days of logging, the Sunday Creek area had a gold rush. EEC principal, Michael, tells me that several thousand people lived in this area at the time. While some panned for gold in Sunday Creek, others dug myriads of mines as they feverishly sought the yellow metal. Some accounts say that people were crammed in so closely together in tents and makeshift shelters that it was almost impossible to drive a horse through the area. If you take time to wonder around, you’ll come across small mounds of dirt which at first glimpse appear to be unmarked graves – they’re actually old mine shafts. 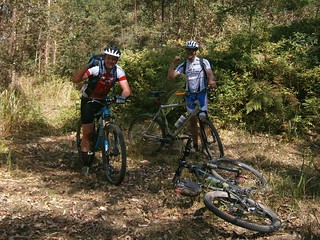 Our plan was to then visit the Sunday Creek Fire Tower. It’s clearly marked as a feature on the DERM maps and I thought it would be a great spot to enjoy the view. After grinding for a kilometre up a very steep and overgrown track, we discovered the fire tower was gone. All that was left were a few old stumps. And there was no view. Aparently it was damaged by a forest fire several years ago, and was demolished. I was grateful the guys didn’t take out their disappointment on me physically 🙂 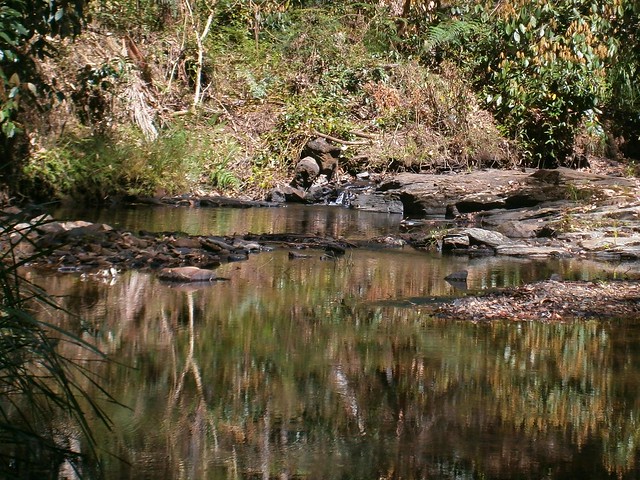 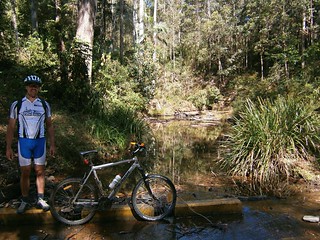 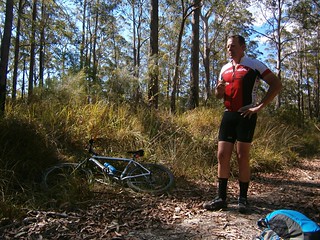 After the fire tower, we made our way southwards along “Ten Mile Road” over a few more creek crossings, stopping every hour or so to top up on food and rest our legs. 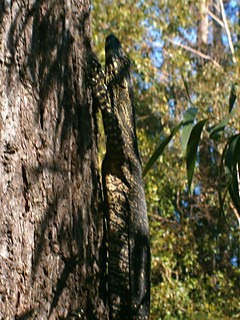 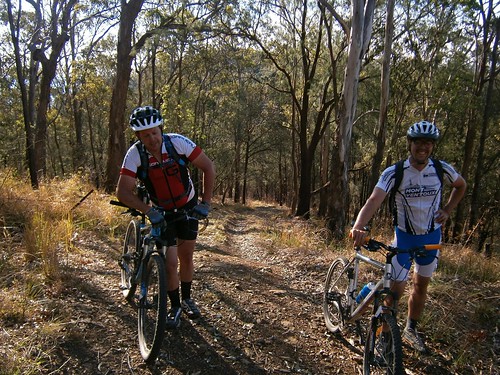 I’m glad we took time to rest. I was expecting a nice steep downhill run back into the valley, and didn’t anticipate the mother of all climbs beforehand. It was only about 500 metres long, but we were all pretty tired by the time we reached the top. 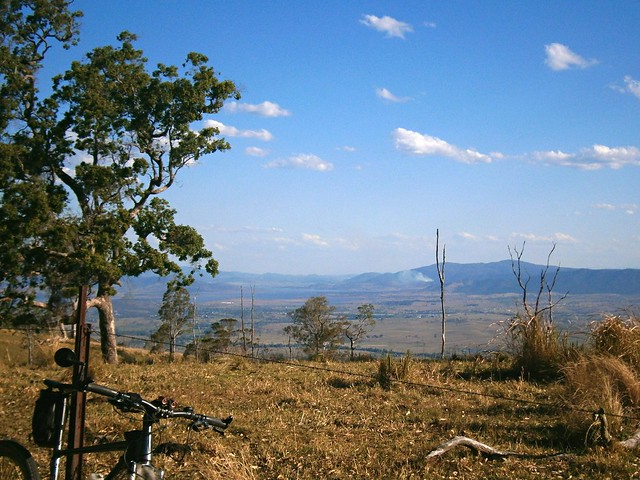 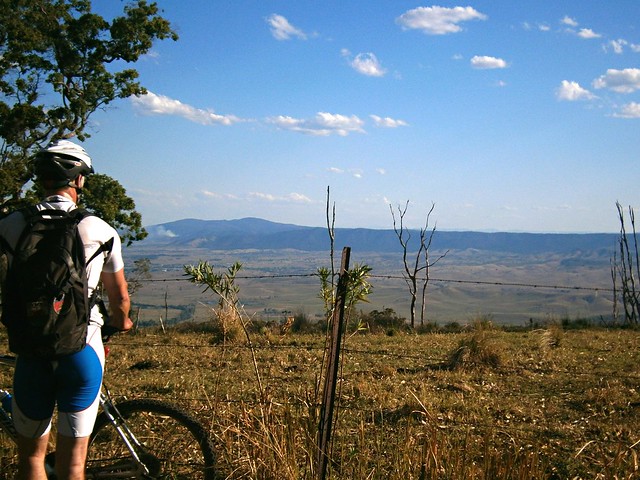 The view from North-West Point at the top of the climb was worth the effort. Below us, to the south, we could see the spectacular landscape stretching out towards Lake Somerset. 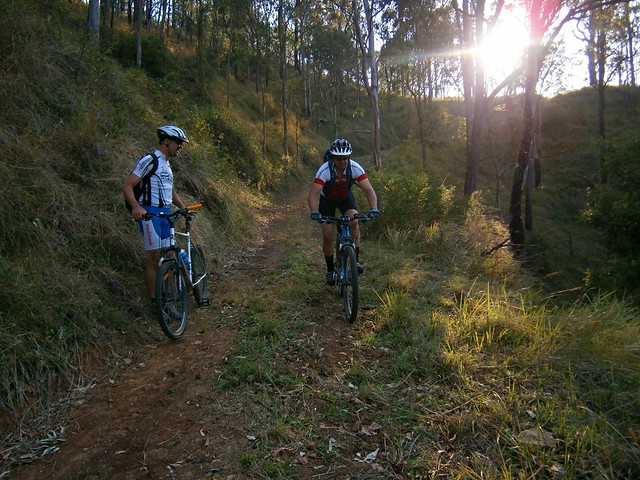 From this point, Kerrs Lane dropped steeply. It was a mountain bikers dream. We just put our weight back as far as possible, tried not to overheat the brakes, and enjoyed the long ride back down to the valley. We lost over 400m of altitude in about 3km. 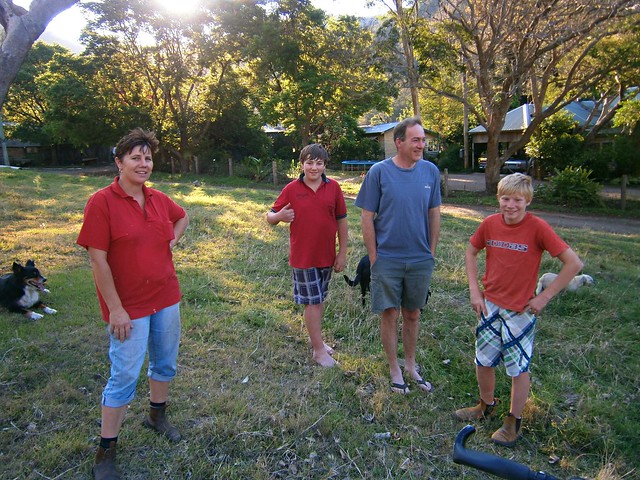 At the bottom of our descent, we found ourselves in a paddock next to a farm house. Ed and Kylie Williams live at Cedar Glen – an idyllic cattle property at the end of Kerrs Lane. They kindly explained to us that although Kerrs Lane might look like an “official” road on maps, it doesn’t really exist. While we thought we were hooting down a gazetted road on our bikes, we were actually riding along one of their farm tracks. 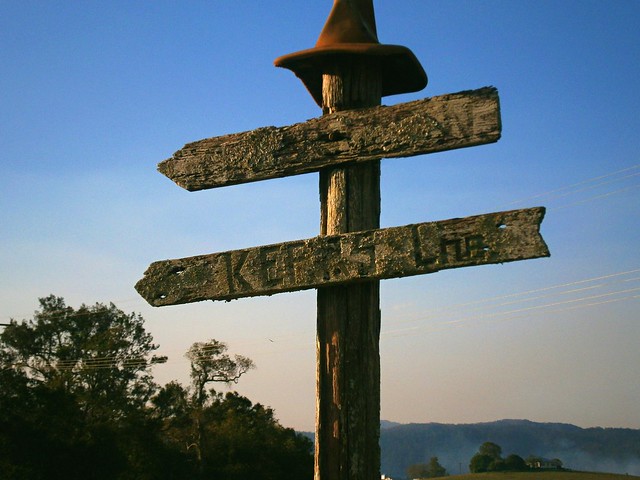 From there, it was a quick roll down Kerrs Lane, back to our car, with the contented cattle still munching on the lush grass. 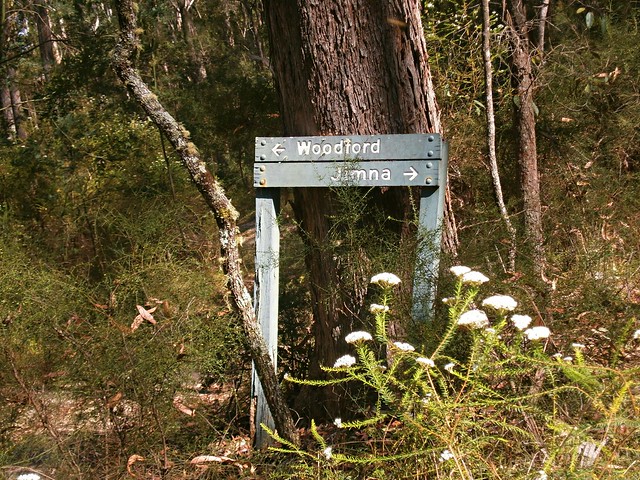 We rode about 55km in about 6.5 hours including breaks. We climbed a total of about 1,600m and I burned about 4,000 kcal. Due to the tough climbs at the start and finish, and the challenging navigation that it required in parts, I’m giving this one 9 out of 10 on the tough-o-meter.

I’d like to pay tribute to Wil. He doesn’t have much experience in Mountain Biking (he’s a road bike rider). This was his first real cross-country mountain biking experience. Apart from a digestive challenge at the start because of the meat pies, he nailed this ride on an entry-level bike with flat pedals and v-brakes (not disk brakes). I think he did incredibly well. Good on ya, Wil!

Thanks, to Jason, too, for driving us out there, and providing some great company during the ride.

I’d also like to thank the Williams family for their warm welcome when we turned up unannounced at their front door-step. It was really nice to meet you, Ed and Kylie.

Thanks also to Michael from the EEC. It made a big difference to us being able to top up our water at Sunday Creek. What you’re doing there is amazing!