The weather bureau predicted thunderstorms with 100% chance of rain. As rumbling dark clouds gathered in the early morning sky, there was only one thing to do: Just turn up! 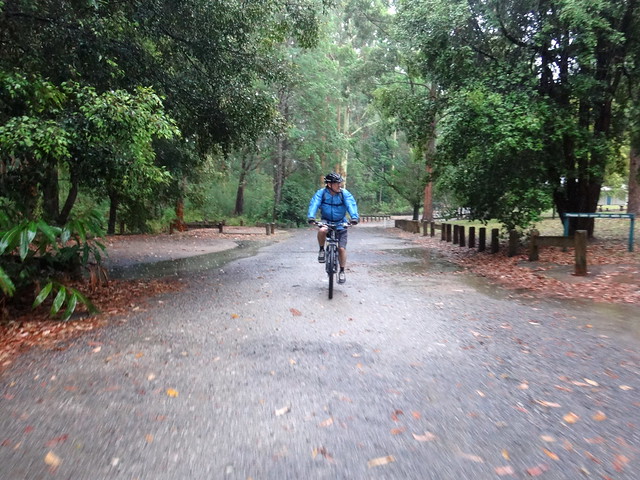 At Mount Mee, Darb and I sat in the car at “The Gantry” day use area with rain pouring down outside. We waited a while for it to subside, then donned our rain coats and rode off. 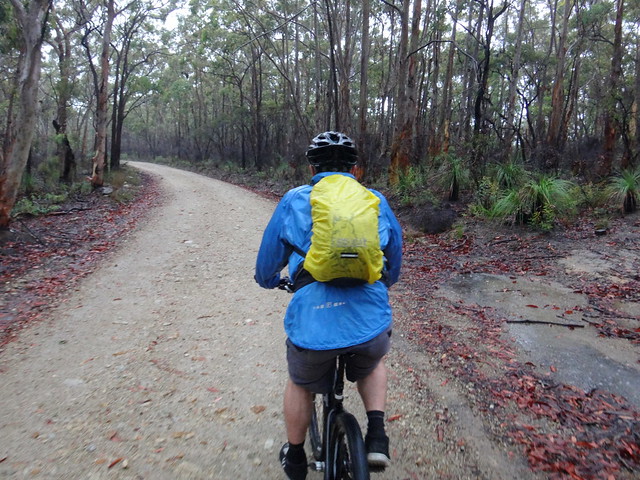 The rain wasn’t as bad as we had anticipated – although we were soaking wet after about 10 minutes.

But the firmly constructed track was solid under our tyres as we rolled along “A-Break” through the dripping forest. 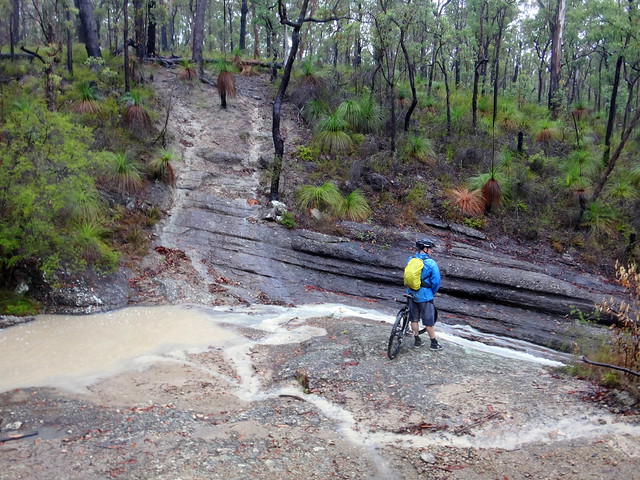 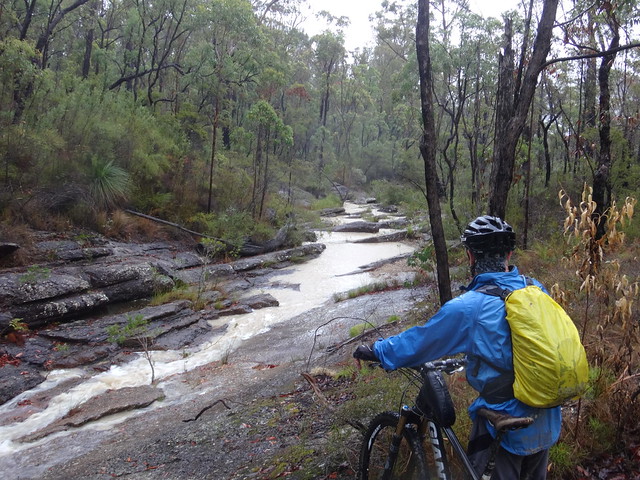 After such a long dry spell, it was a novelty to see creeks flowing with water. 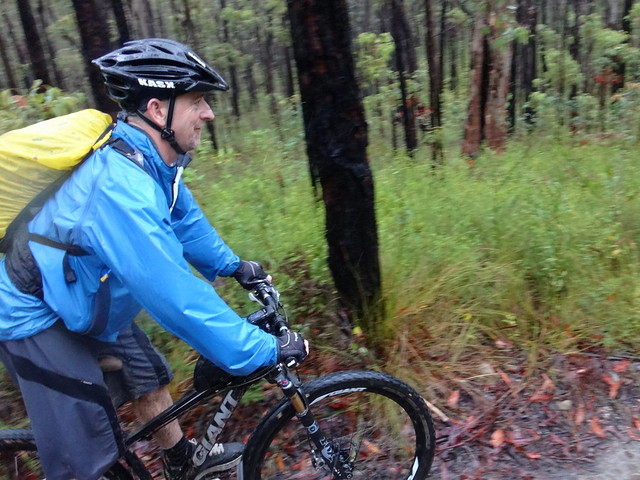 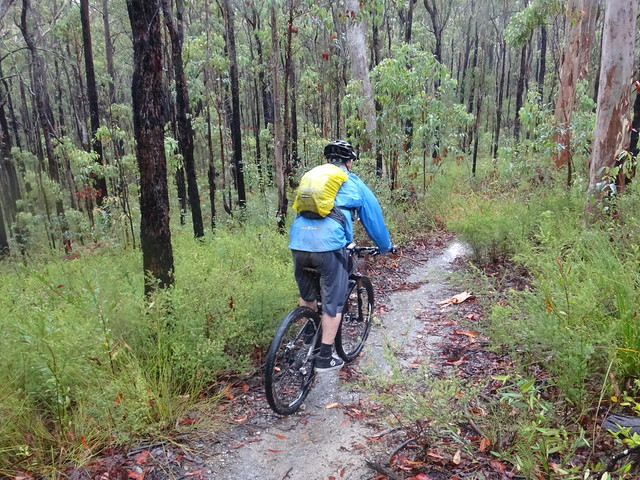 We twisted along some narrow tracks towards the Western Escarpment – a high series of cliffs on the western edge of the D’Aguilar Range. 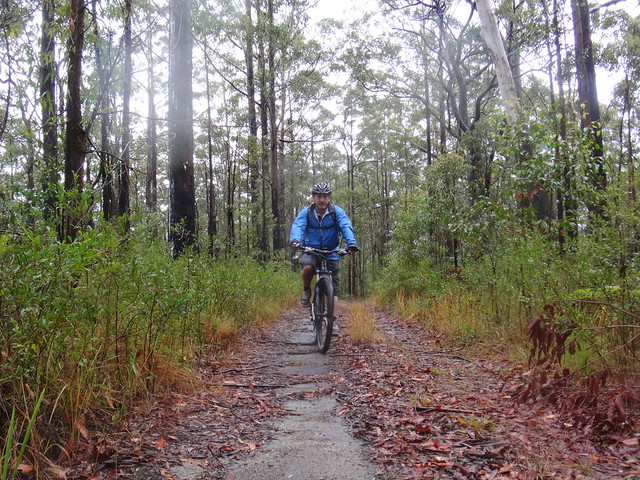 At the escarpment, we turned south towards the summit of Mount Byron. The rain stopped, and the clouds started to clear. Through the trees we could see some impressive views as we pedaled and pushed the bikes towards the top. 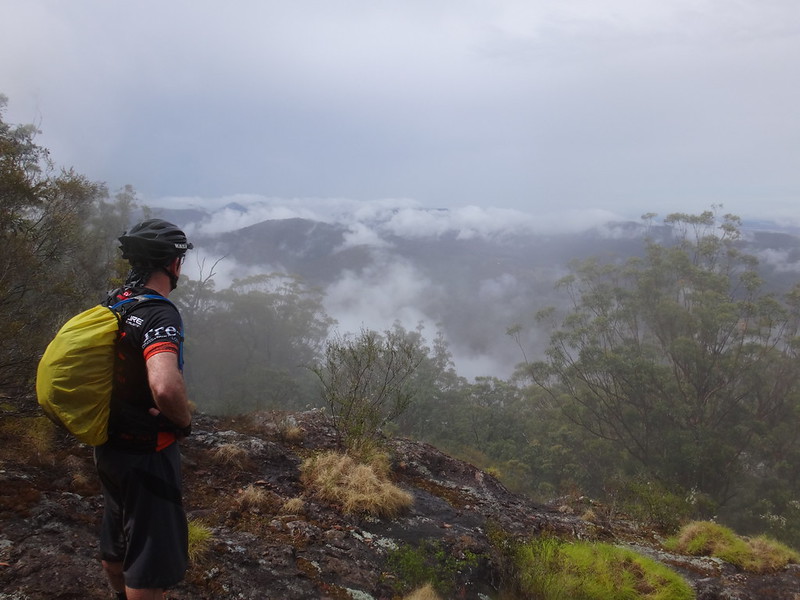 Below us, cotton-ball clouds drifted over countless wooded hills as we stood atop the summit of Mount Byron, 618 metres above sea level.

We were standing about 800 metres from Dianas Bath, which we had visited a couple of weeks ago. This time, though, we were about 500 metres higher. It was a long way down.

The high peak of Mount Byron can be clearly seen from the coast. It was probably named by James Cook after Vice Admiral John Byron – the same Byron in whose honor Cape Byron and Byron Bay were named.

The Admiral’s nickname was “Foul-weather Jack”, because he frequently encountered bad weather while at sea.

In 1764 as commander of the survey ship Dolphin, Jack was sent on an expedition to the Pacific Ocean to search for “Terra Australis Incognita”. He never found Australia. But despite all the storms, he did manage to circumnavigate the world.

Six years later as he charted Australia’s eastern coastline, James Cook probably thought of unfortunate John Byron who sailed a ship around the world, but missed an entire continent. And he probably counted himself fortunate to have not made the same mistake. 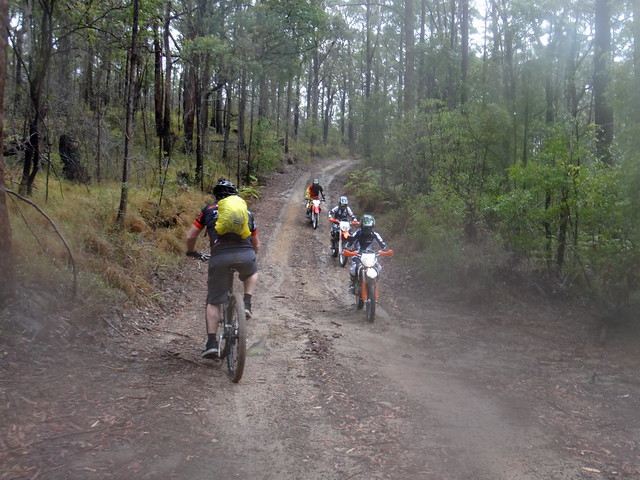 We said “G’day” to a few friendly trail bike riders as we made our way down the mountain. 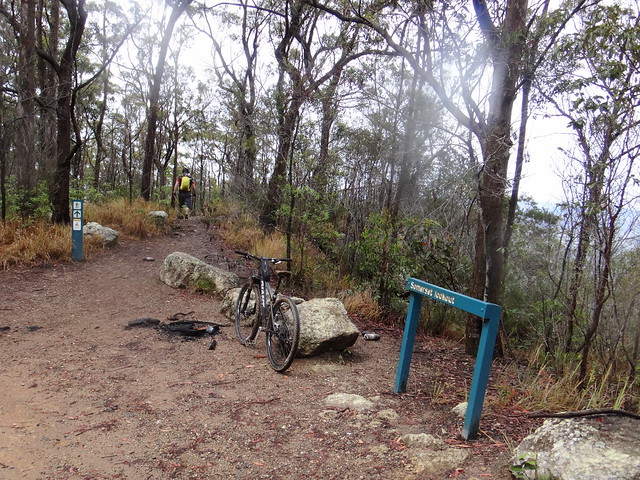 Eventually we reached the second vantage point of the day: Somerset Lookout. 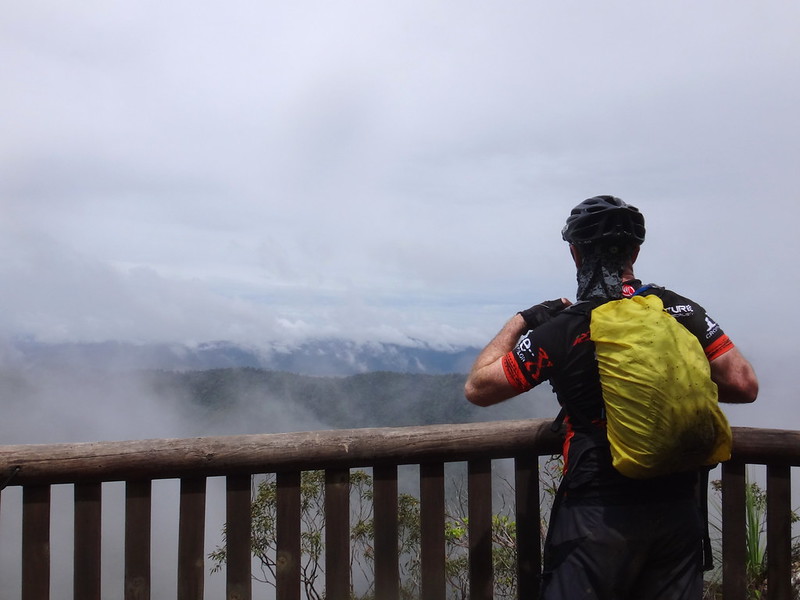 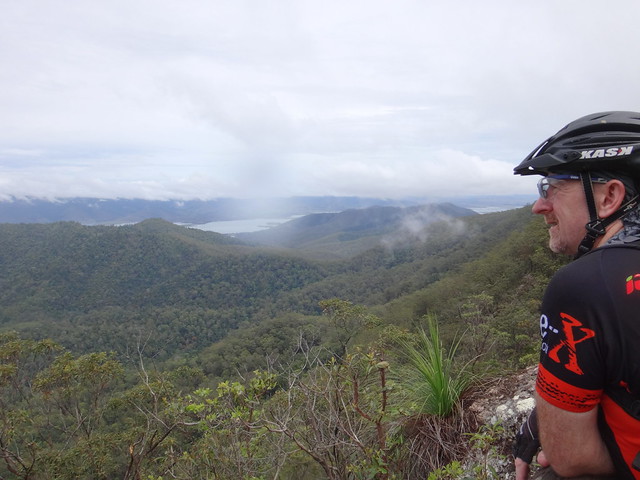 I’ve been here quite a few times before, but I never tire of the expansive views. 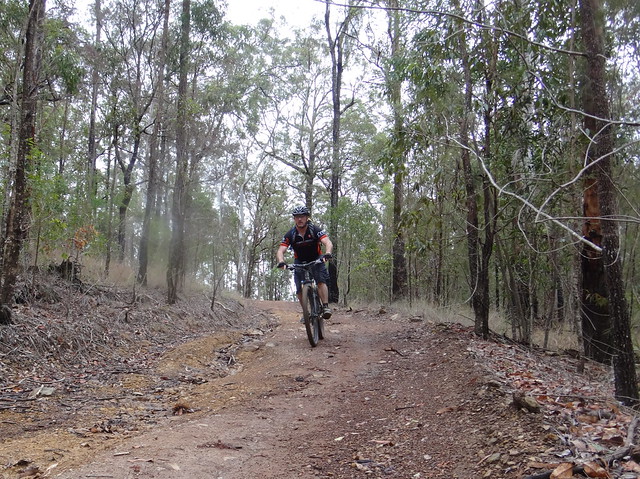 We continued to follow the track north along the edge of the escarpment. Both of us were curious about where we’d end up.

As we rode downhill past numerous creeks I kept reminding myself that we’d eventually have to make up for the loss in altitude with some hard work later. 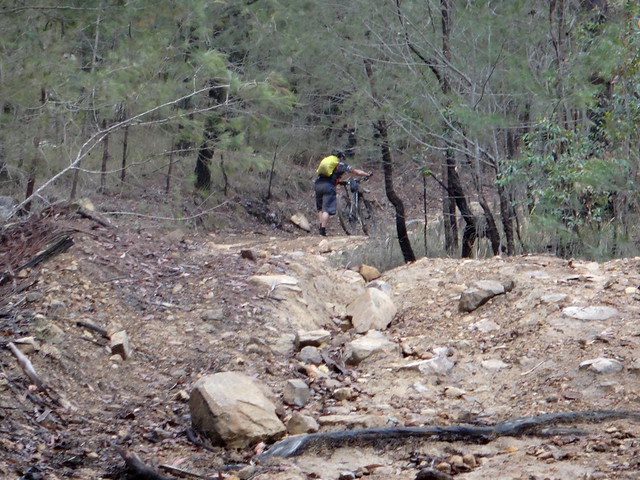 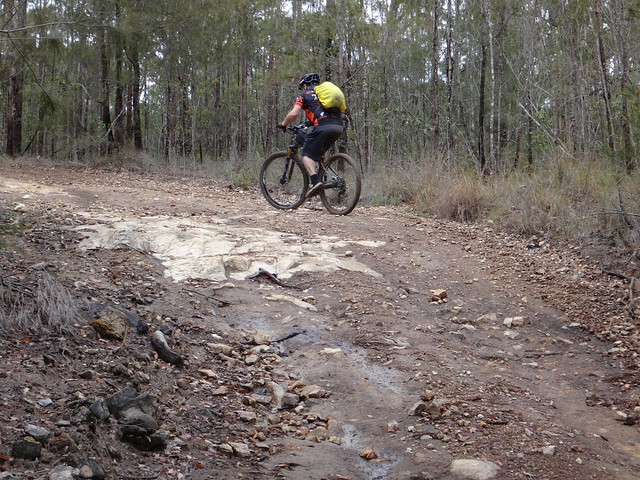 The hard work came sooner than I had expected as we ground our way up some steep trails.

We repeated the process several times. 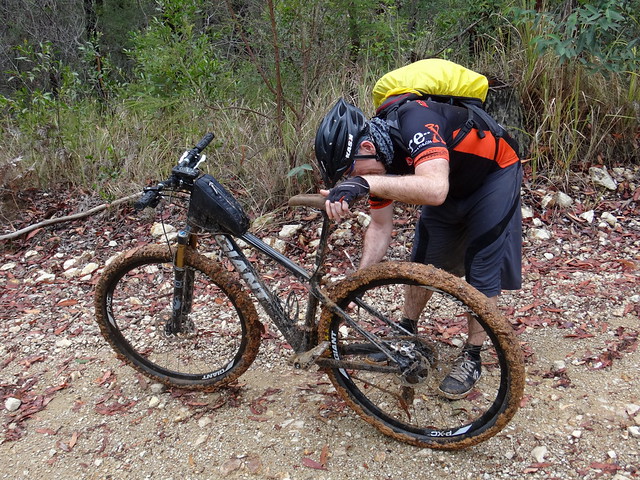 As we neared The Gantry, the tracks grew muddier.

Clay and mud clogged up our drive train and tyres. As I pushed my bike out of the mud my wheels wouldn’t spin because they were so clogged up.

While Darb tried getting rid of it with a stick, I used my hands to grab huge chunks of clay from my tyres. 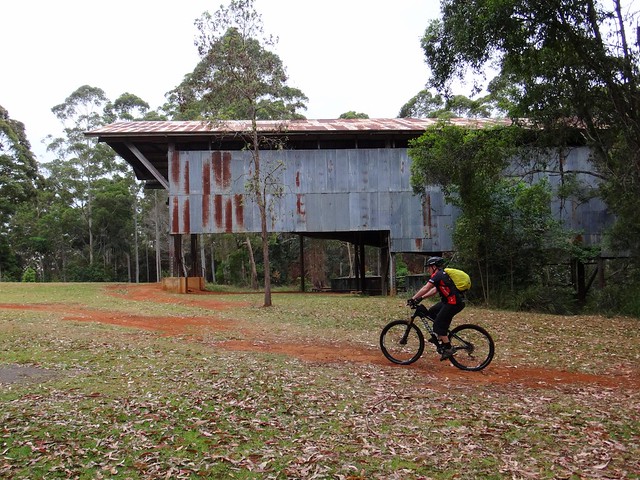 Back at The Gantry we washed the bikes off under a tap before we had lunch.

I’m glad Darb and I decided to show up despite the rain. Sometimes it’s tempting to abort an adventure because of forecast bad weather. We decided to turn up anyway, just in case the conditions improved. They did improve. We were lucky. But to cash-in on this sort of luck you have to actually be there.

This ride was relatively short – just under 30km; but the terrain was rough and steep, so the ride took us over 4 hours including breaks.

We had originally planned to ride an extra 20km, but our slow progress in the wet weather made that impractical.

We climbed just under 600m in vertical ascent, and I burned about 2,000 kcal.

Thanks, Darb, for another fun day out in the bush!