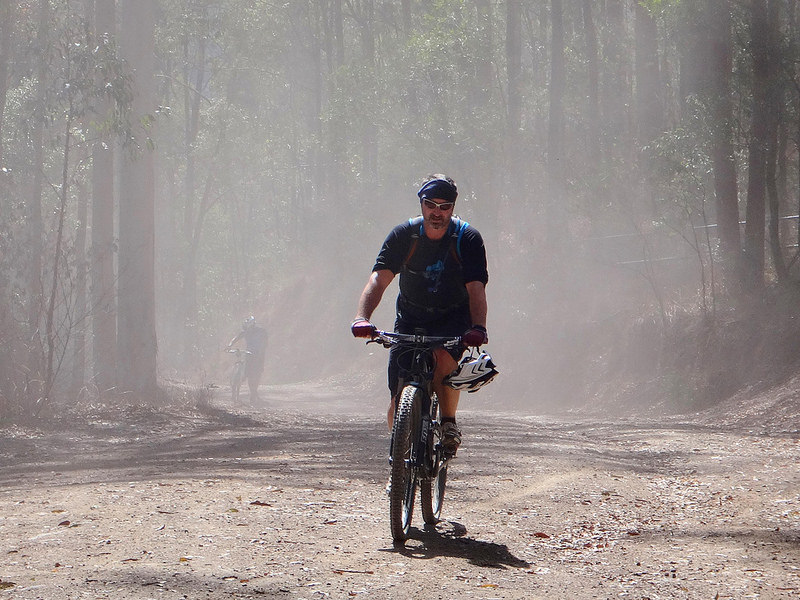 On a dry and dusty morning, with mid-summer arriving two months early, seventeen crazy mountain bikers had a great idea…. 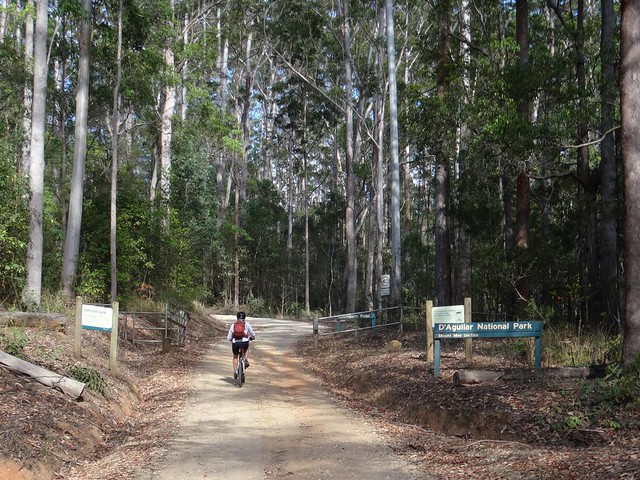 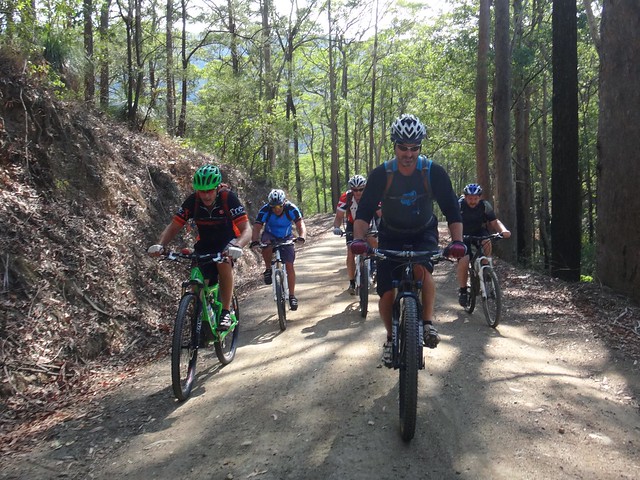 In order to beat the heat we decided to keep our ride short (about 25 km) and have a cool swim at the half-way point.

But to earn the swim, we first had to tackle a couple of challenging climbs. 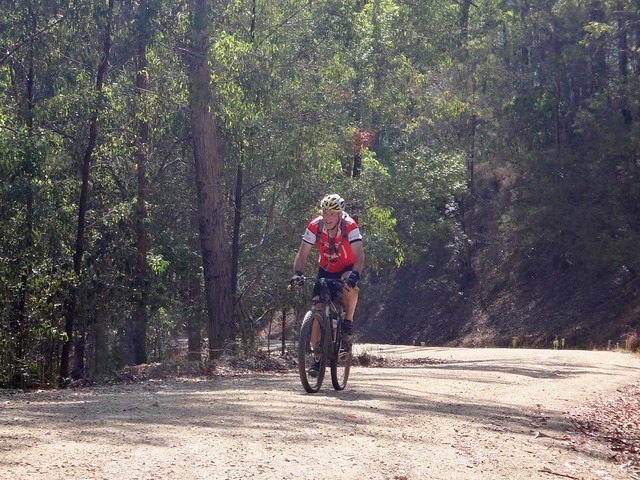 There was no easing into it. As soon as we started, we had to tackle Chambers Road – a 1.5km climb with some steep sections exceeding 20% in gradient. 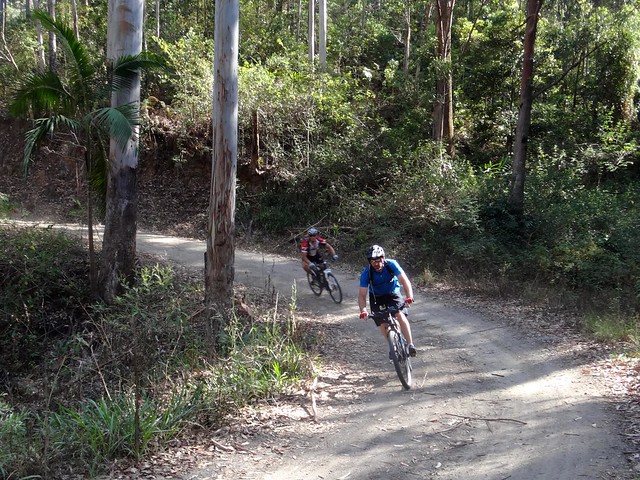 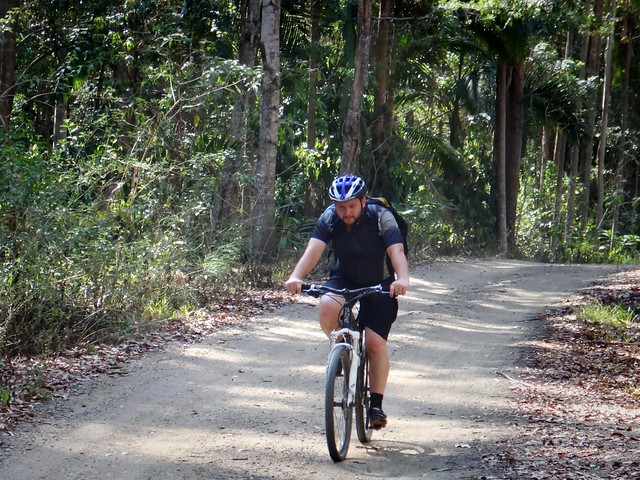 It was a relief to be cooled by the breeze as we rolled down the other side towards Byron Creek. We enjoyed a brief respite from the sun in the shade of the Piccabeen Palms that line the creek banks. 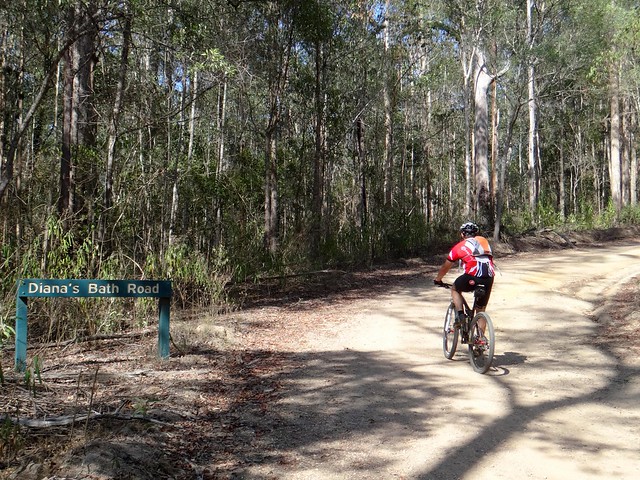 The second climb of the day, up Dianas Bath Road, was steeper and dustier. 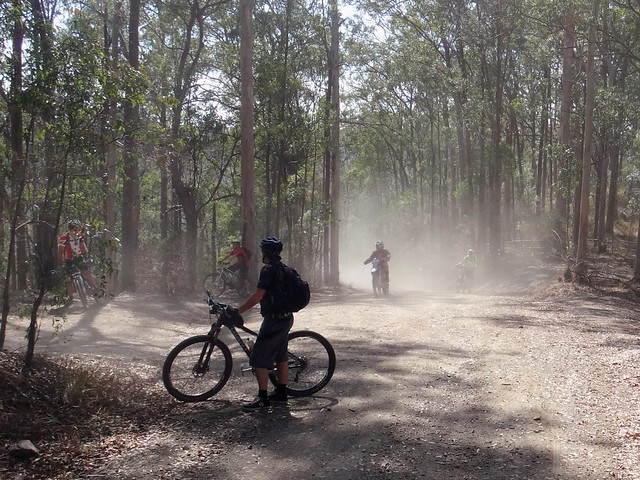 Each of us made our way up this climb at our own speed as we tried to avoid motor cyclists buzzing up the hill on their trail bikes.

One by one we emerged from the dust cloud at the top of the hill near “A – Break”. 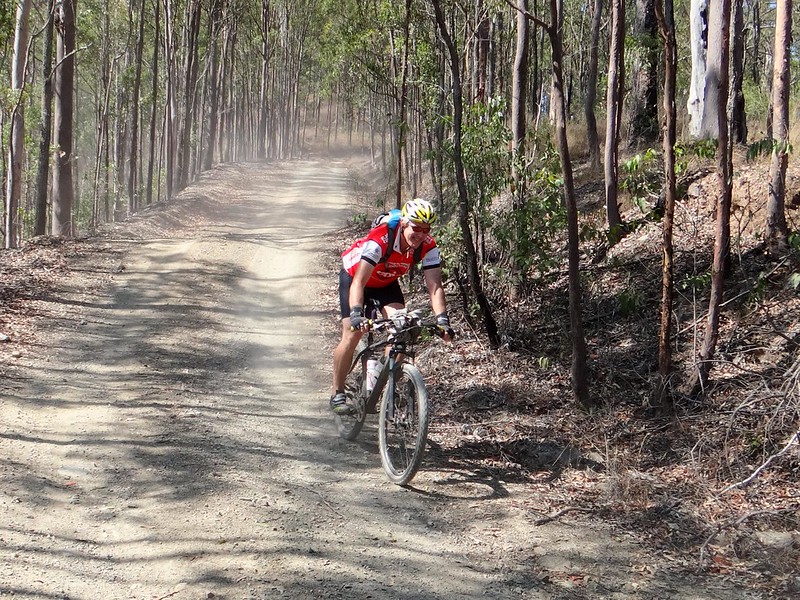 The “A – Break” intersection marked the highest point of the ride. From there we rocketed down a bumpy track, losing over 500 metres in altitude in less than 3km. Although this was exhilarating, a nagging voice in the back of my head reminded me that on our way back we’d have to ride up this nasty incline.

Ahhh the law of gravity. Sometimes you love it, some times you just grin and bear it 🙂 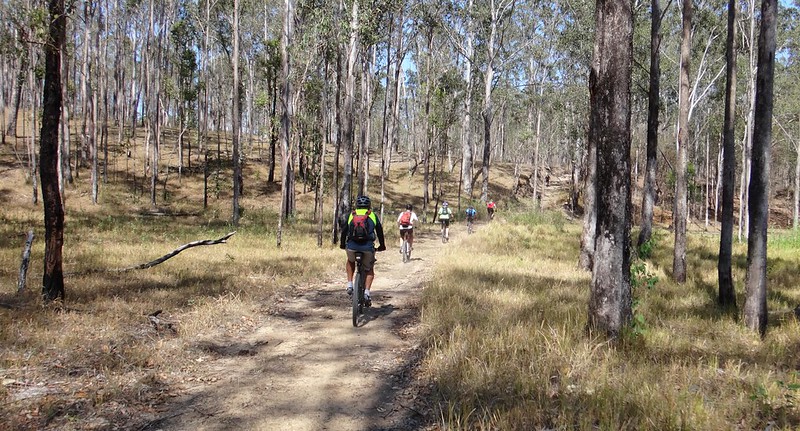 At the bottom of the descent we followed some quiet farm tracks to the water hole. 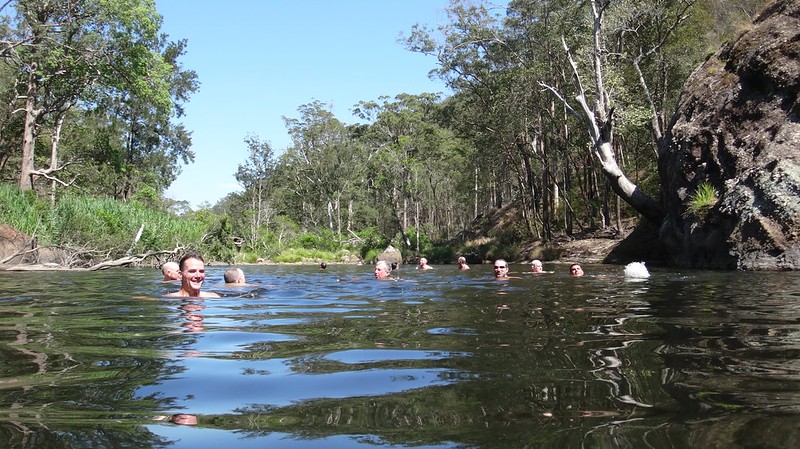 After grinding a mountain bike up steep dusty trails in 40C heat, it was a delight to cool off in the secluded tranquil water of Dianas Bath. 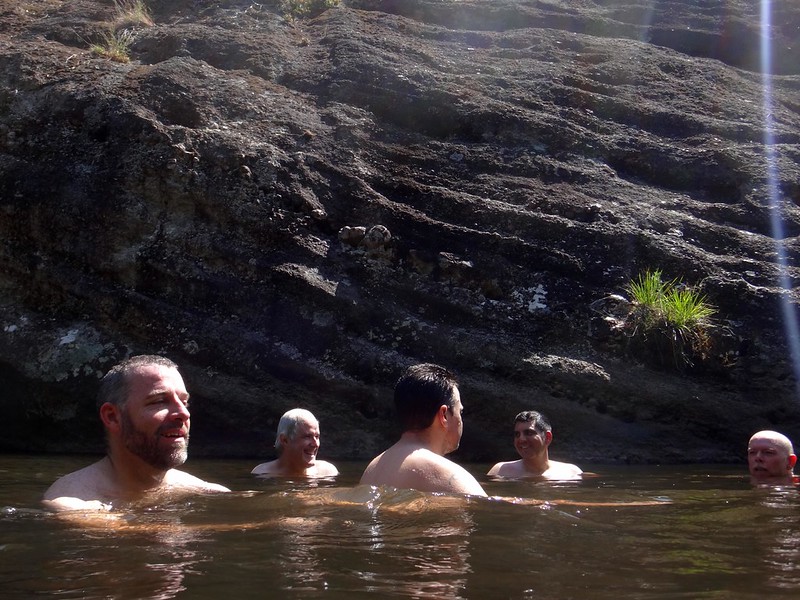 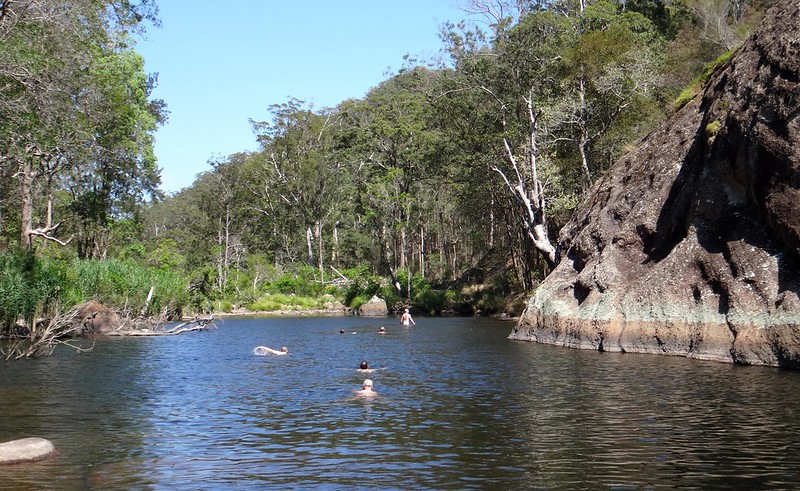 This is a special place, hidden among the sheer rock faces around Mount Byron. It’s difficult to reach, but always worth the effort.

On a hot day, there’s no better place to be. 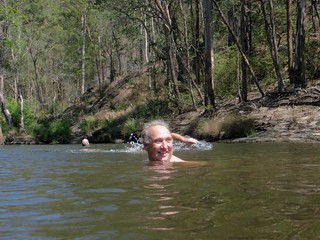 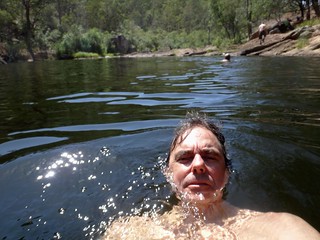 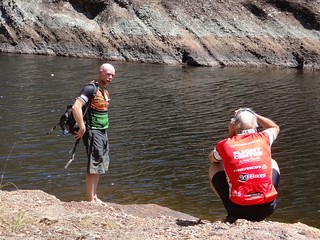 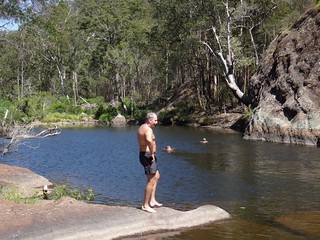 We all chilled-out for a while, then had a quick bite to eat before accepting the reality of the return journey back up that nasty hill. 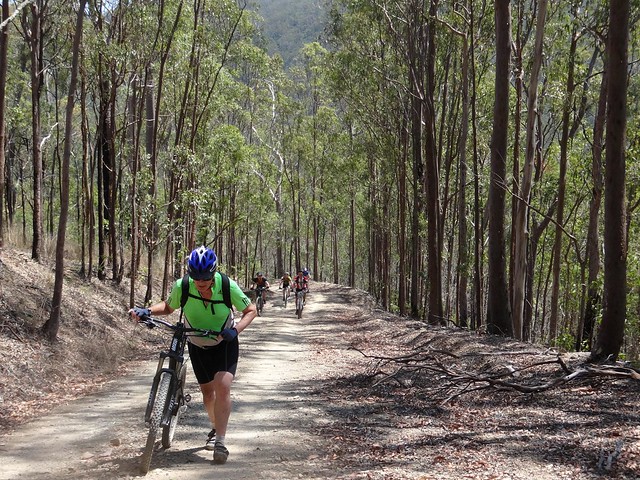 Some walked, some pedaled as we all slowly made our way back up the hill. 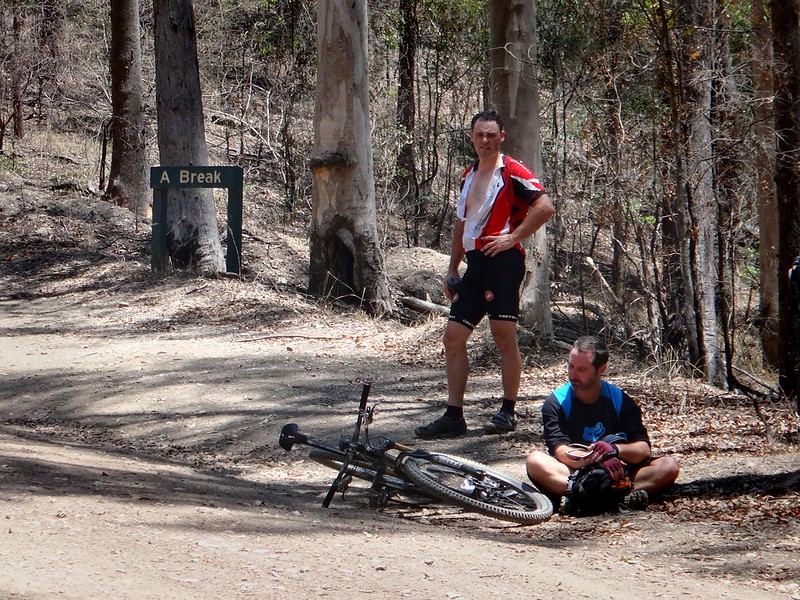 We waited for everyone to catch up at the top of the hill.

It was hot. Although this was only a short ride, many of us were starting to run low on water. 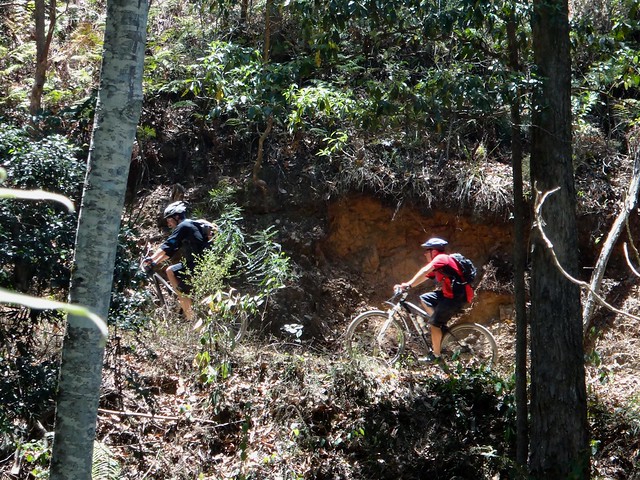 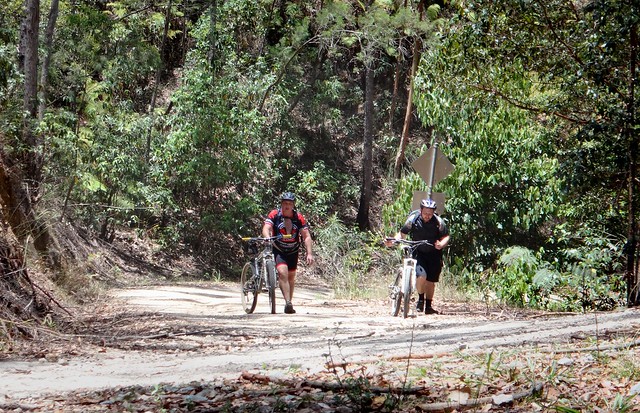 The final climb of the day was back up Byron Creek Road. A few kind souls shared their spare water with others who had run out.

I was surprised how tough a short 25km ride could be. Many times I’ve ridden over three times this distance on less water and with less effort. 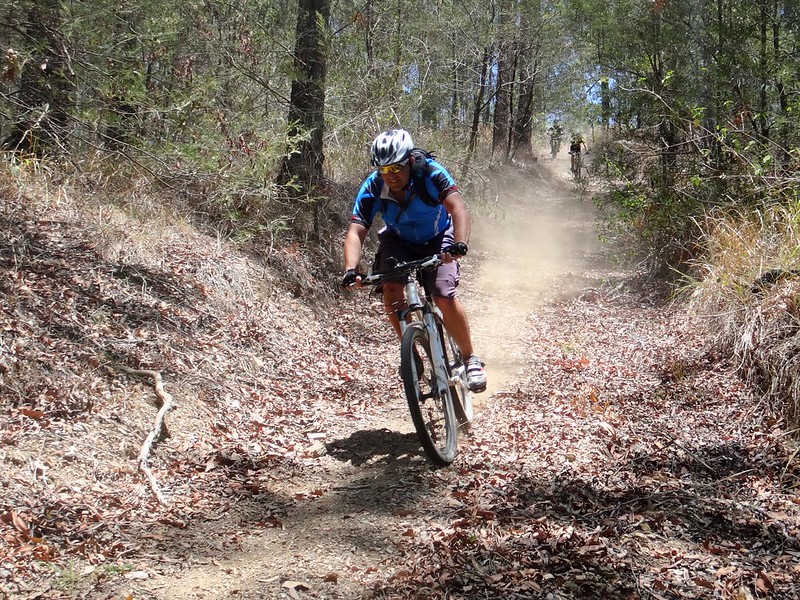 We enjoyed the final descent down a very steep horse trail. Once we started, it was too steep to stop. All we could do was make sure the bikes stayed on the track, and that we stayed on the bikes.

All up we rode 24km in just under 5 hours including breaks. We climbed about 950m in vertical ascent, and I burned about 2,000 kcal.

Despite being a short ride, it was a tough challenge on a hot day with three big climbs and a couple of really fun down-hill sections. I barely had enough water to last the distance.

Thanks everyone for a fun morning on the bikes!

Note: Dianas Bath is on private property. The owner currently allows walk-in access only. Please treat it with respect, clean up any mess you make, take all litter with you, and be courteous towards anyone else who is using the waterhole.

4 Replies to “Beat the Heat”