After making it half-way up the mountain last week, we felt compelled to come back to the end of the Black Duck Creek valley and complete a loop up to the top of the range and back down via Mount Hennessy. As usual, it was steeper, rougher and more spectacular than we had anticipated. 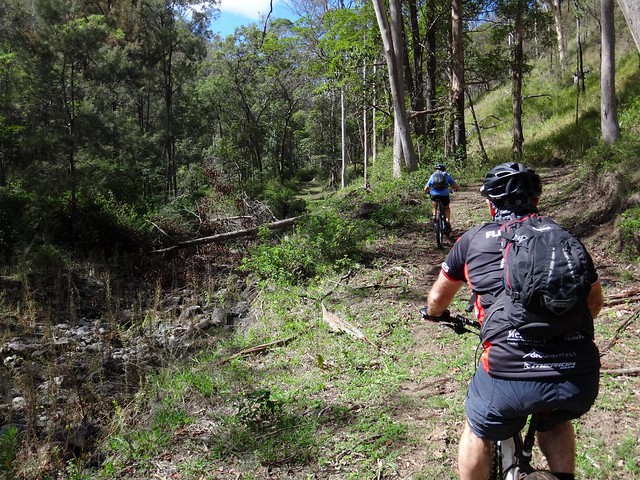 We started at the end of Black Duck Creek Road and slowly made our way up through the creeks and up the hill to where we left off last week. 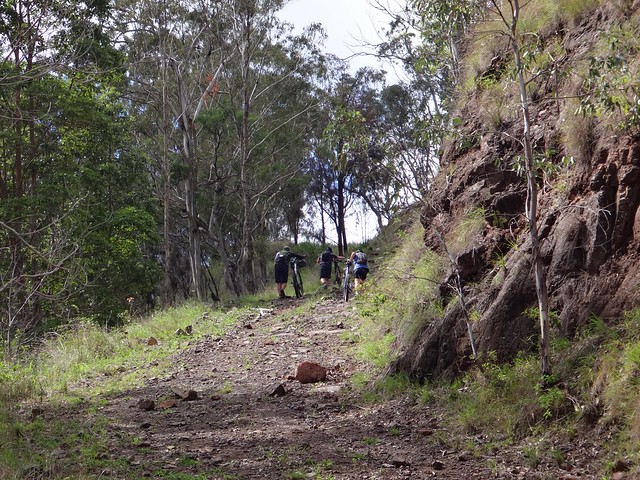 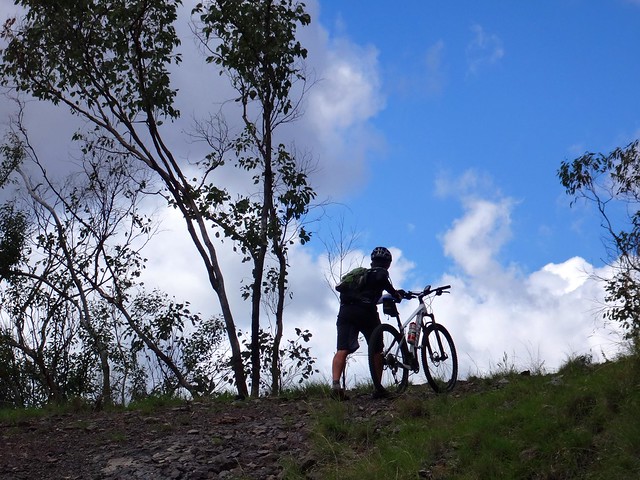 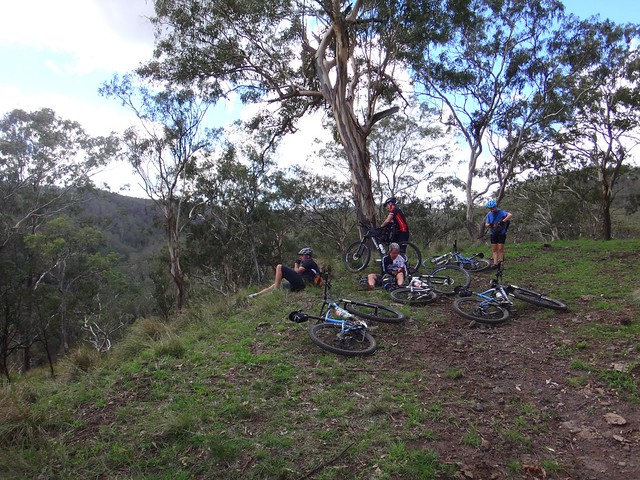 The track is too steep to ride for about one kilometre, so we just pushed the bikes up the hill and enjoyed the view before taking a break. 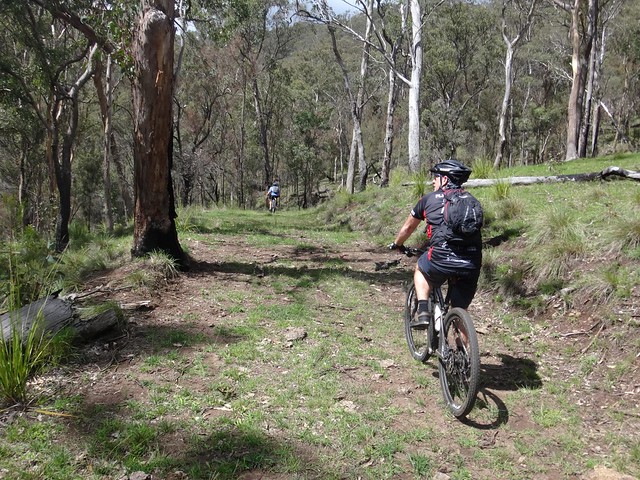 Eventually the track flattened out and we came to a fork. The choice was to keep climbing up another steep unrideable track to the ridge, or ride the greener flatter path which followed the contours of the hills.

“We’re just rationalizing this because we don’t want to push the bikes up another steep hill”, someone else admited. 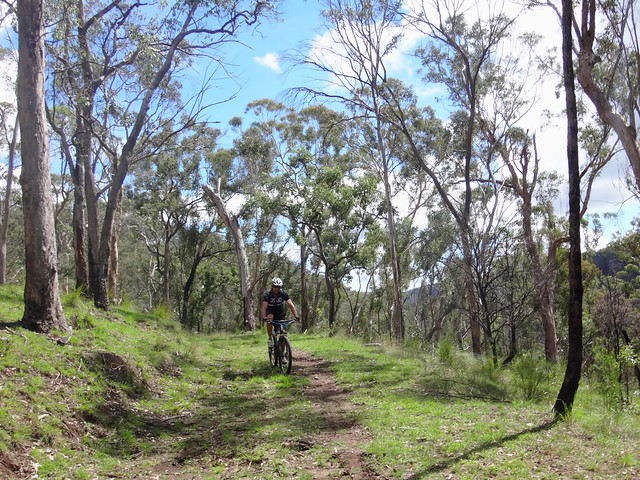 So we rationalized, and took the more pleasant, flatter track, enjoying the delightful respite from the hard work of the previous hour, and relishing the easier climb. 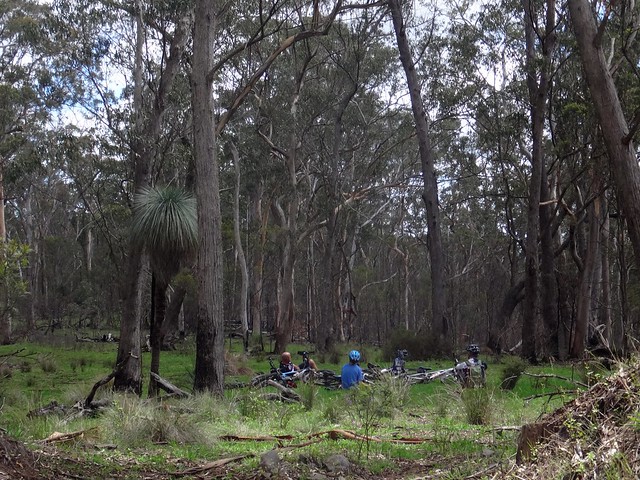 We eventually reached an open spot at the top of the range near an old dam, and took another quick break to enjoy lunch. 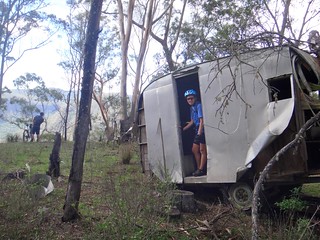 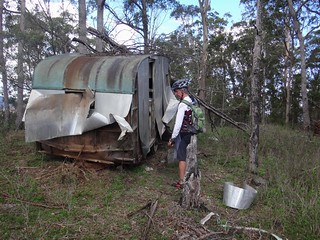 This old Caravan was perched on the edge of a cliff. Residents might not feel too safe on stormy night in “The Goomburra Hilton”. Becca was worried she might be sharing the van with a few carpet snakes, so didn’t spend much time inside… 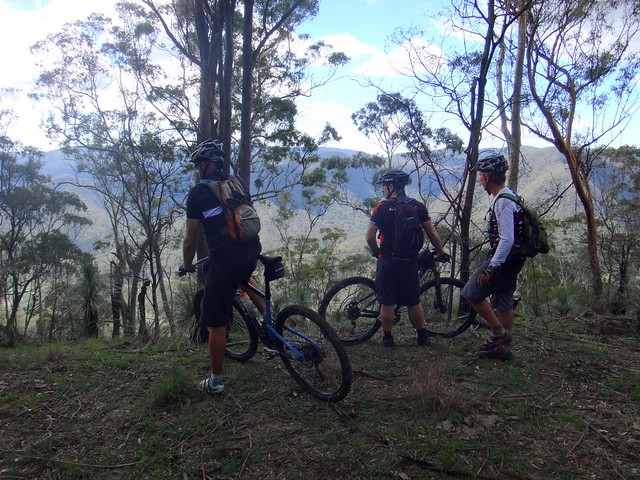 …enjoying the views from the edge of the cliff instead. 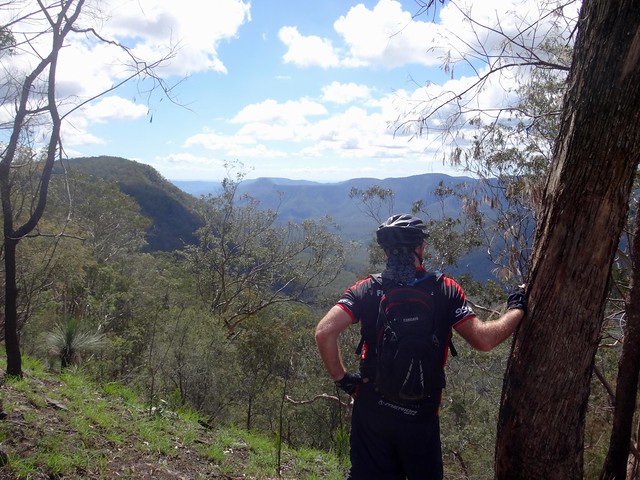 We were close to where we had ridden on a couple of previous rides, and decided it would be a good idea to “join up” our track with those previous GPS plots. This would add a one kilometre “out and back” to our route, but we would benefit from having an accurate record of a route over the mountains from “Gordon Country” camp ground in Goomburra to the south. Unfortnately this meant going downhill a long way, and then pushing the bikes back up the hill as we retraced our tracks. Despite the hard work, we enjoyed the views of the East Haldon Valley to the north. 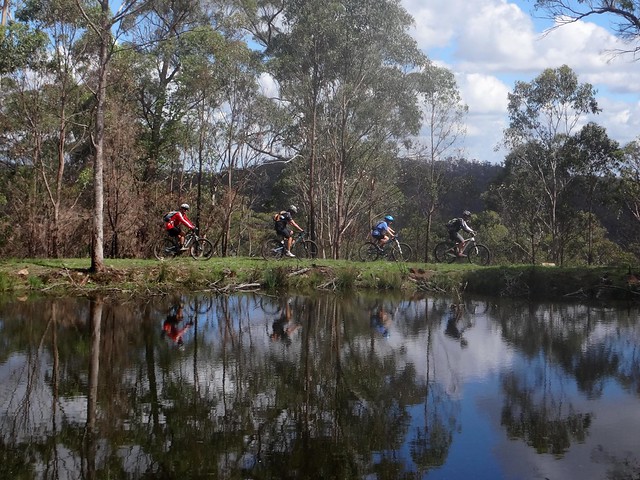 We eventually resumed our ride towards Mount Hennessy, passing this irrigation dam on the ridge. 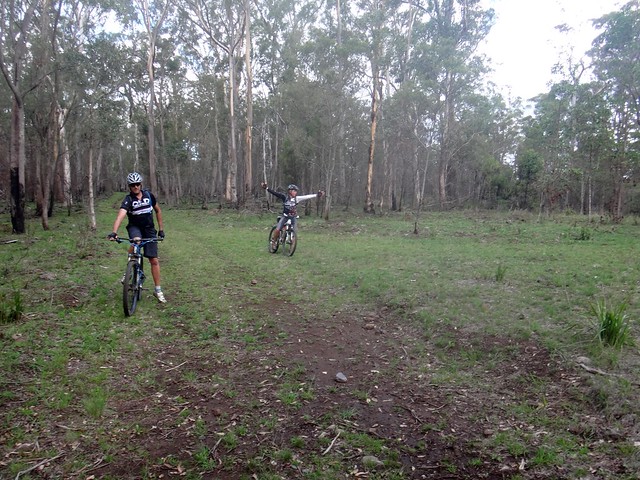 Shortly before we reached the summit, Eric pointed out a fork in the track. I took the photo so we had a record of the co-ordinates for future reference. The maps say that five trails converge at this point. We didn’t realize it but the track to Mount Machar goes off to the left of this picture. Eric’s left hand is pointing towards an alternative route around Mt Hennessy, avoiding the summit, and offering an easier gradient. We opted for the tougher ride over the top, where Eric’s right hand is pointing. 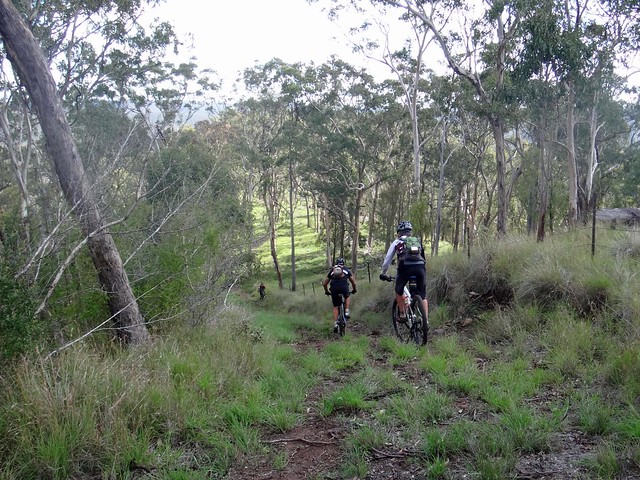 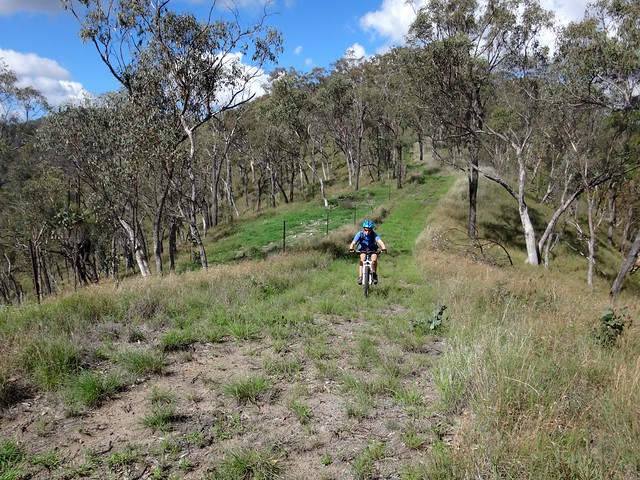 Eventually the undulating terrain on the ridge gave way to some downhill gradients and we started rolling down some of the steep tracks back to our starting point. 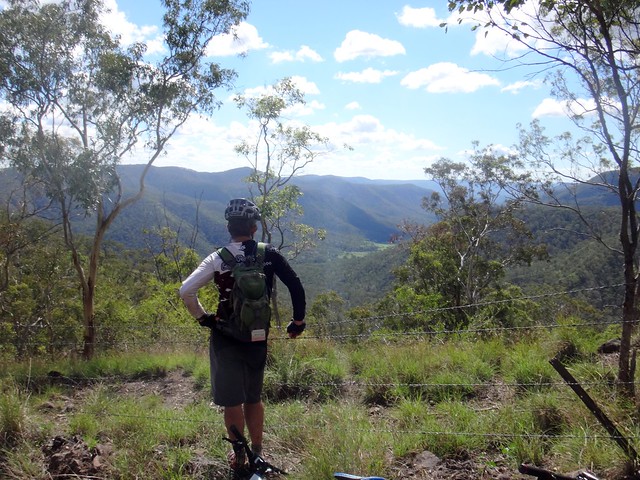 The views up the Black Duck Creek valley were stunning. We stopped every few hundred metres to soak it up. 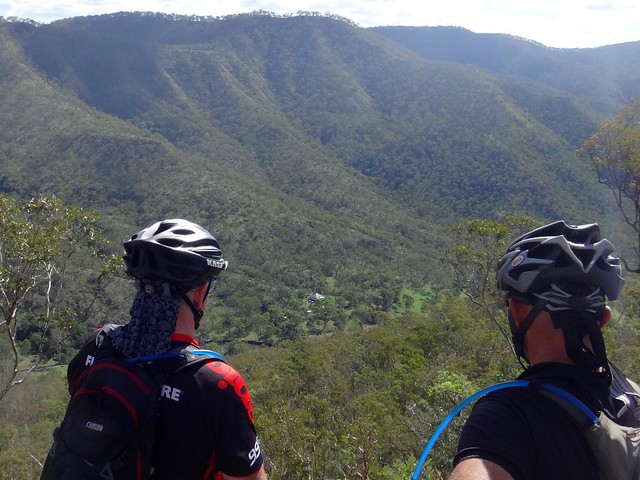 We could even make out our friend Bushy’s house, like a minature in the valley below us.

“It’s a long way down”, someone muttered. 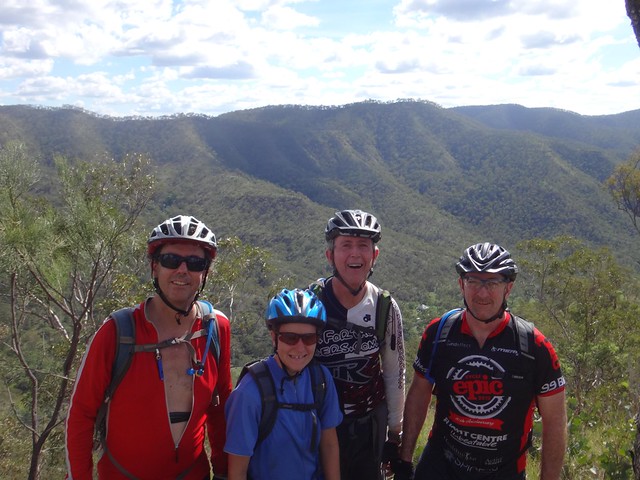 Before the most treacherous part of the descent, Paul lined us all up and took a group shot. 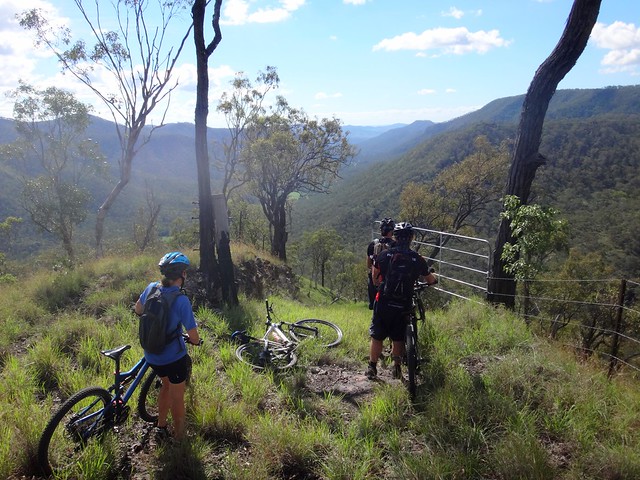 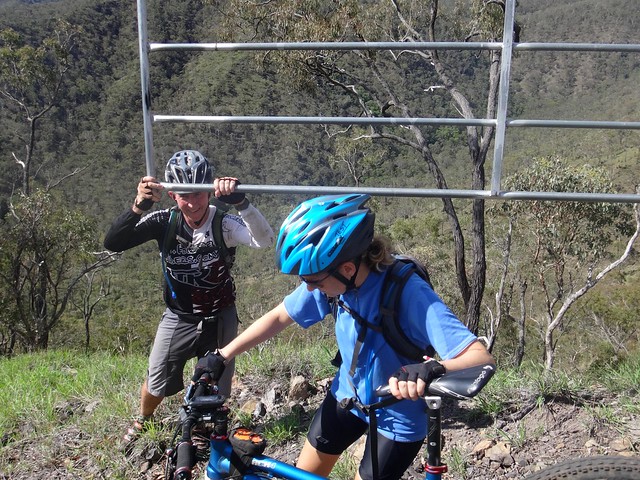 A gate blocked our path, and on the other side, the track plummeted downwards.

The track dropped so steeply that the gate was level with Eric’s head when he stood on the downhill side of it to hold it open. 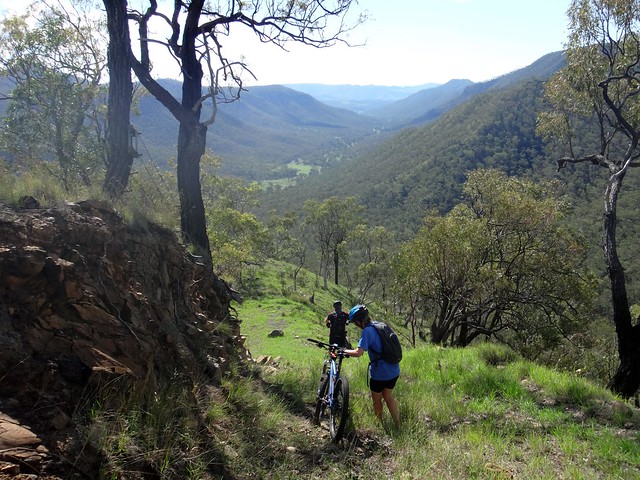 “Let’s walk this bit!” someone suggested. No one disagreed. 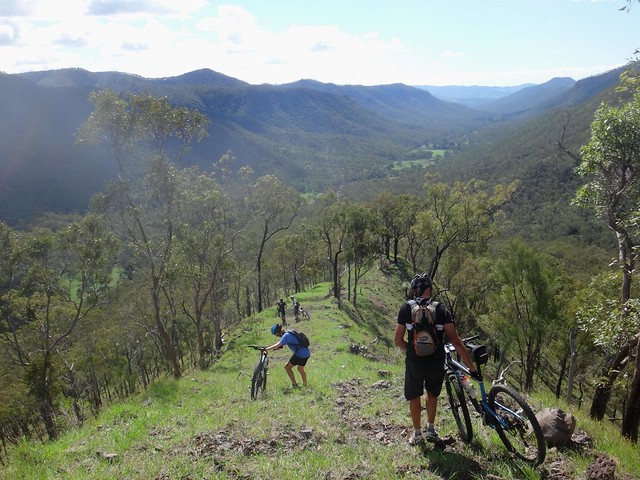 Although the pictures say otherwise, we DID ride a lot of the descent. It’s just that my whitened knuckles were gripping the handlebars so tightly that I didn’t get a chance to photograph it. 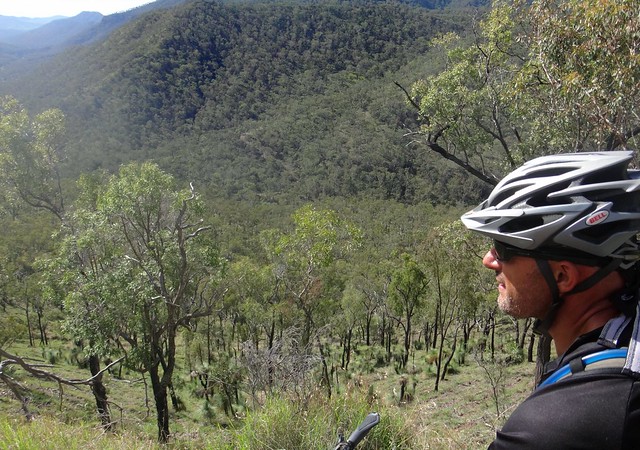 “This is magical”, Paul said.

I don’t often hear him say things like this, but I knew what he meant, and I felt the same way. 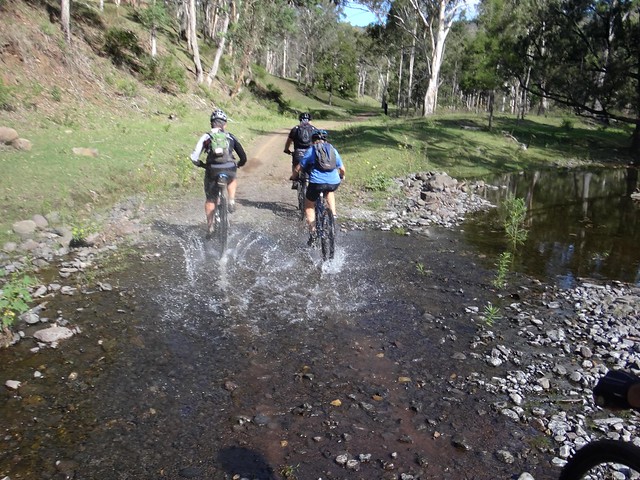 And before we knew it, we were on the valley floor, splashing through the creeks back to Bushy’s place.

We’d survived this insane descent, and were very happy.

Mission accomplished – we now have what we think is a pretty good route from Gordon Country at Goomburra to Gatton via Black Duck Creek and Mount Sylvia.

We’re looking forward to coming back with friends.

And now the unusual stats…

We rode 24km in just under 5 hours including breaks. During that time we climbed about 900m of vertical ascent, and I burned about 2,500 kcal. I’ll rate this one 9 out of 10 on the tough-o-meter, although it parts of this ride would be much easier as a north-bound point to point ride.

Thanks Eric, Becca, Darb and Paul for a wonderful ride!

And thanks, Bushy, for keeping an eye on us.

Here’s Darb’s video of the ride…

One Reply to “Mount Hennessy”