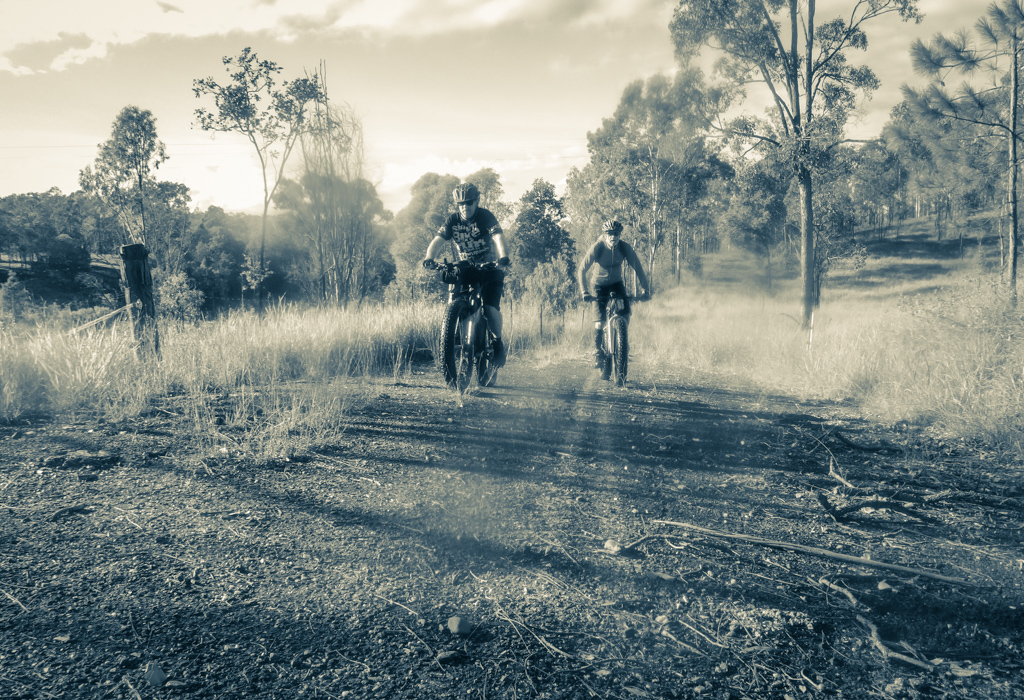 Roads are like people: there are many of them, new ones are constantly being born, and they eventually grow old and die. Today we explored one old road that is slowly being reclaimed by the earth. 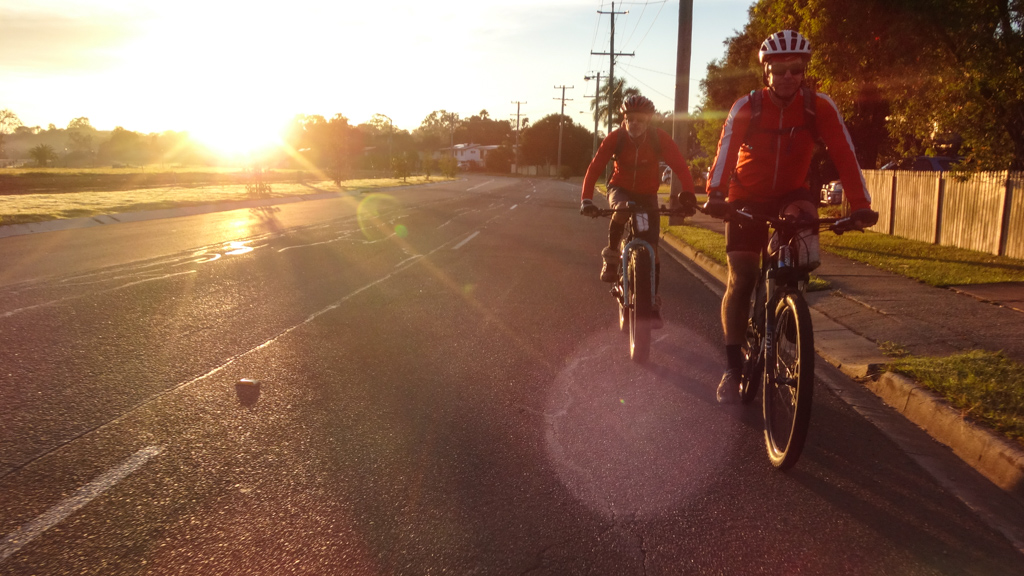 In a departure from our normal habit, we started from home – riding down familiar local streets as the sun slowly rose on our backs. 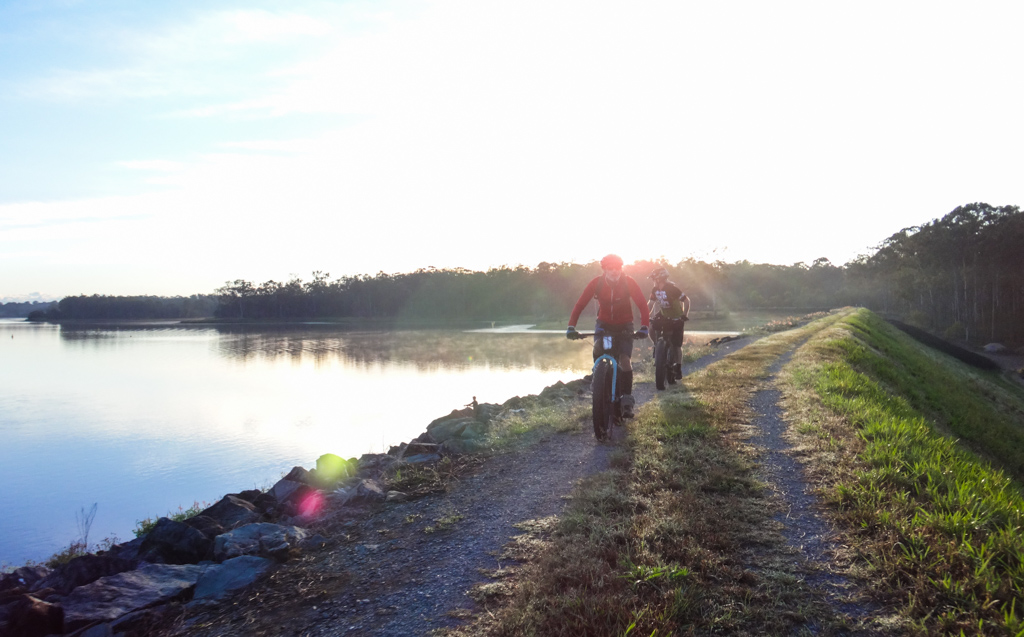 I’m fortunate to live near some serene lakes, so our course followed pleasant trails along the shoreline, avoiding noisy roads. 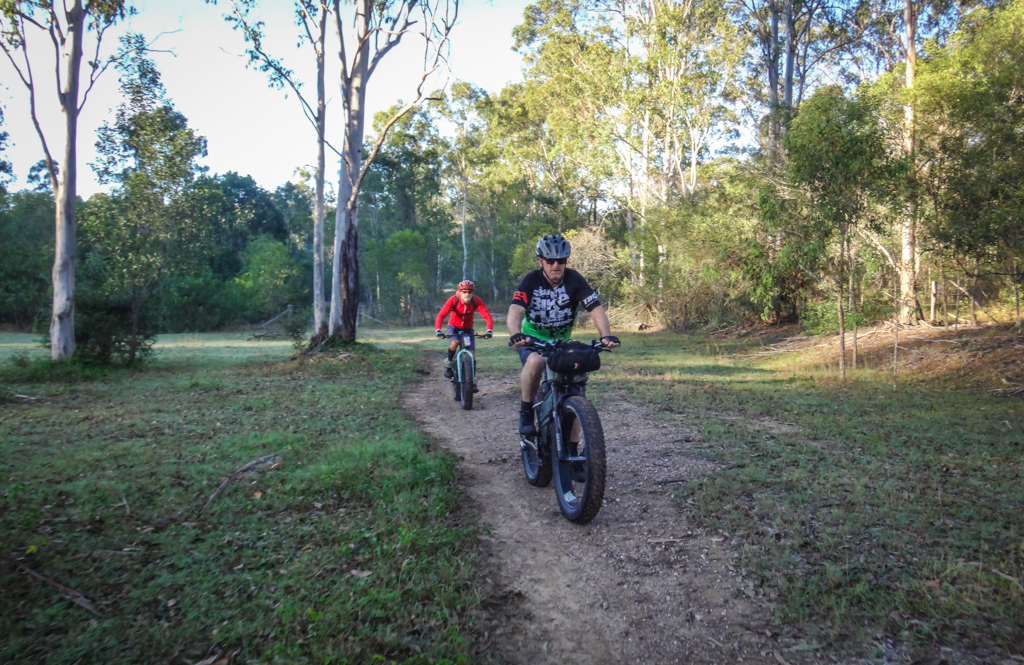 Our first “old road” of the day was Dunlop Lane. This road reserve used to form part of “The Old North Road” – a trail which stretched from Moreton Bay Settlement to Durrundur Station near present-day Woodford. Blazed in 1843, it followed ancient aboriginal pathways, and provided one of the earliest routes north out of what we now call “Brisbane”. Happily, this section still passes through sections of undisturbed bushland which sometimes helps me pretend I’m riding a time machine instead of a mountain bike. 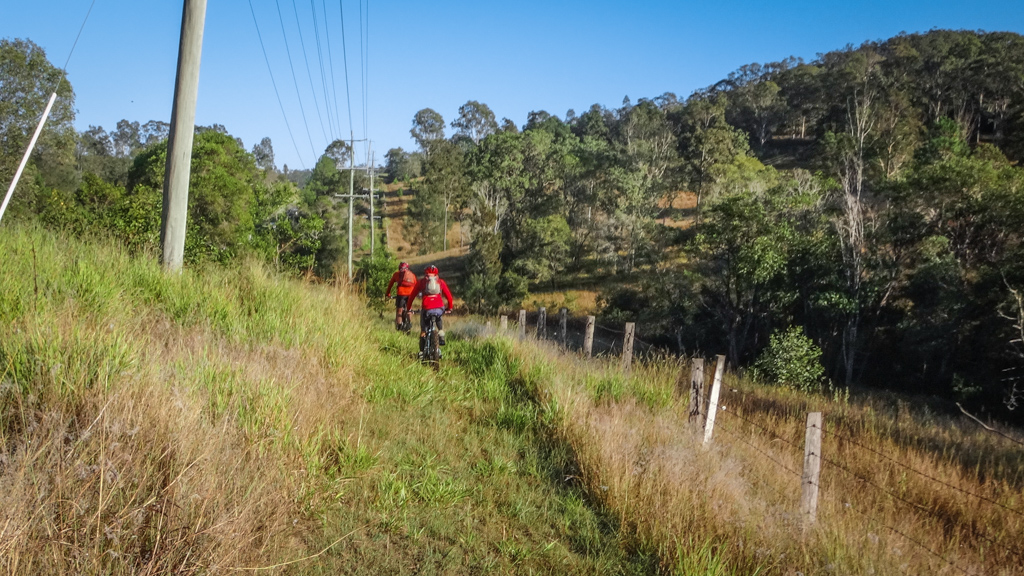 We hoped to find an off-road way to get from Petrie to Dayboro, so when our route neared a busy road, we detoured along some nearby horse trails. 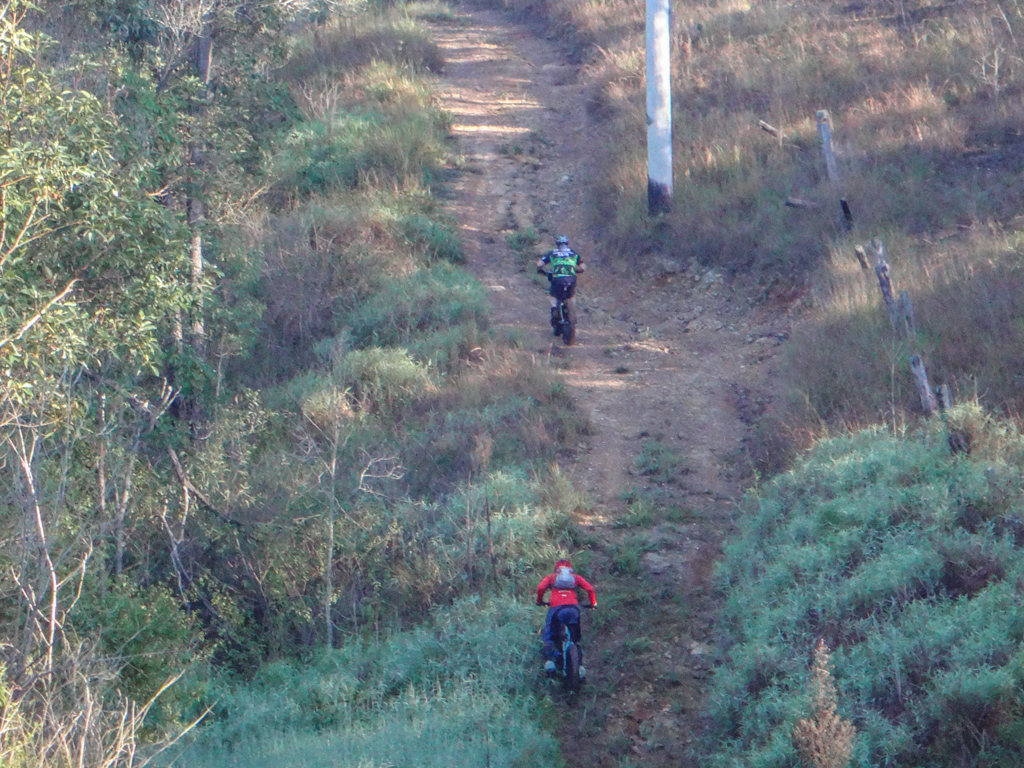 Some parts were steep, but we preferred a couple of intense climbs up a bumpy track over the bustling main road. 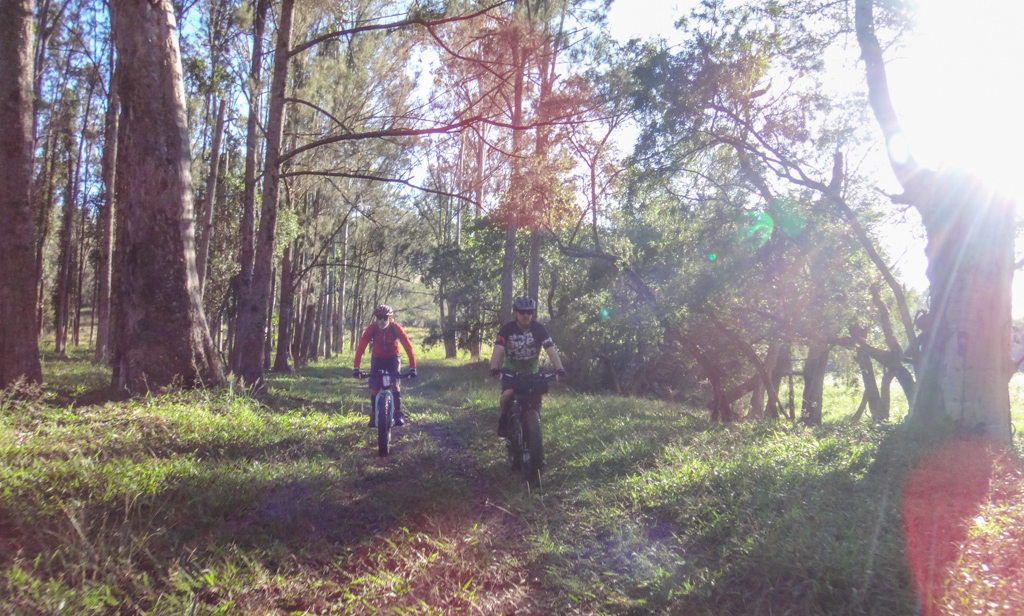 Leaving the main road we pointed our bikes through the trees towards the shoreline of the lake. 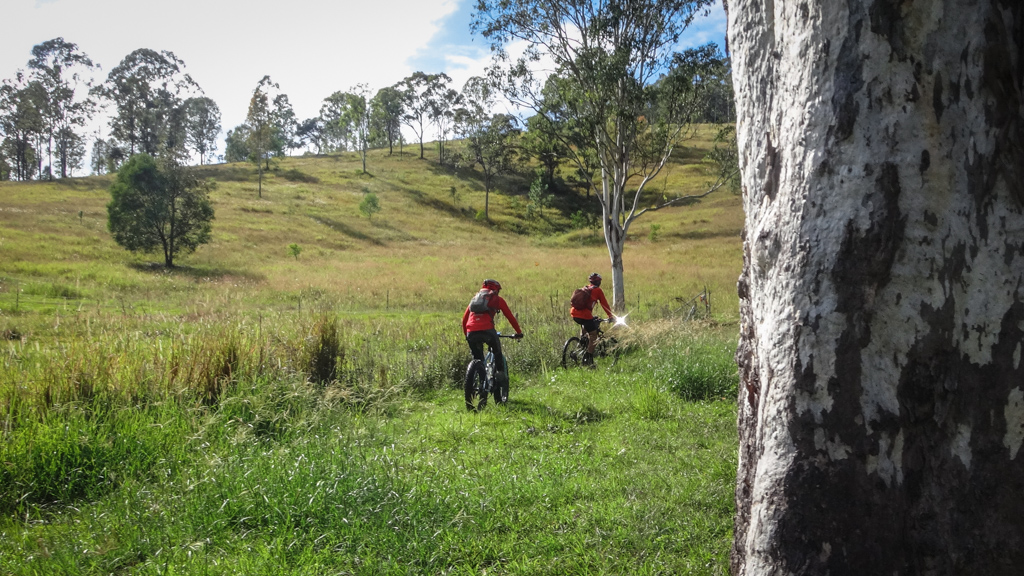 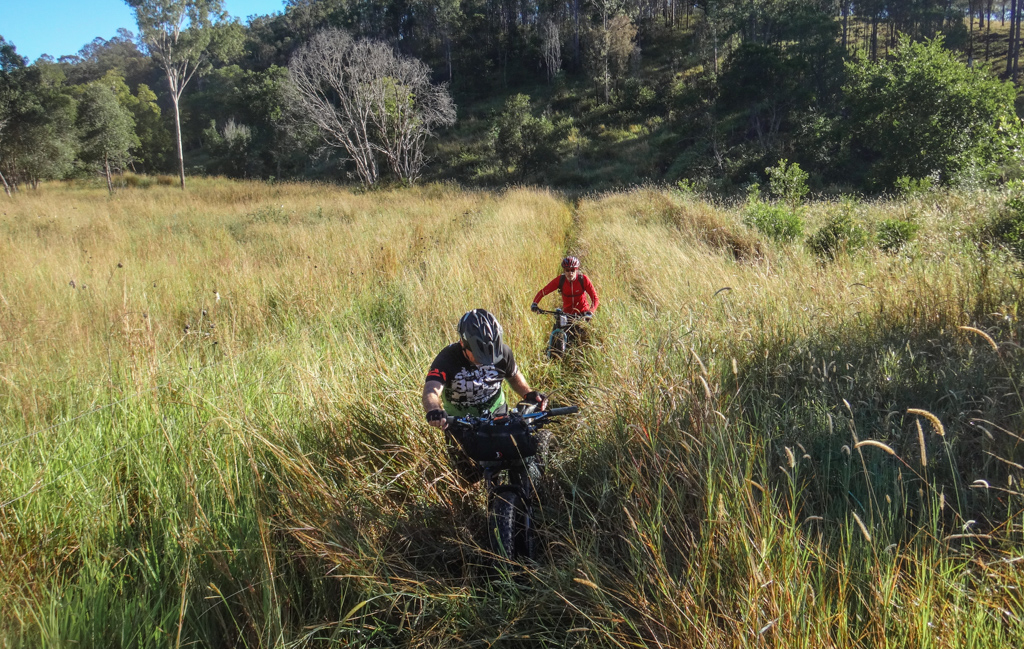 And then the grass grew higher, forcing us to push. 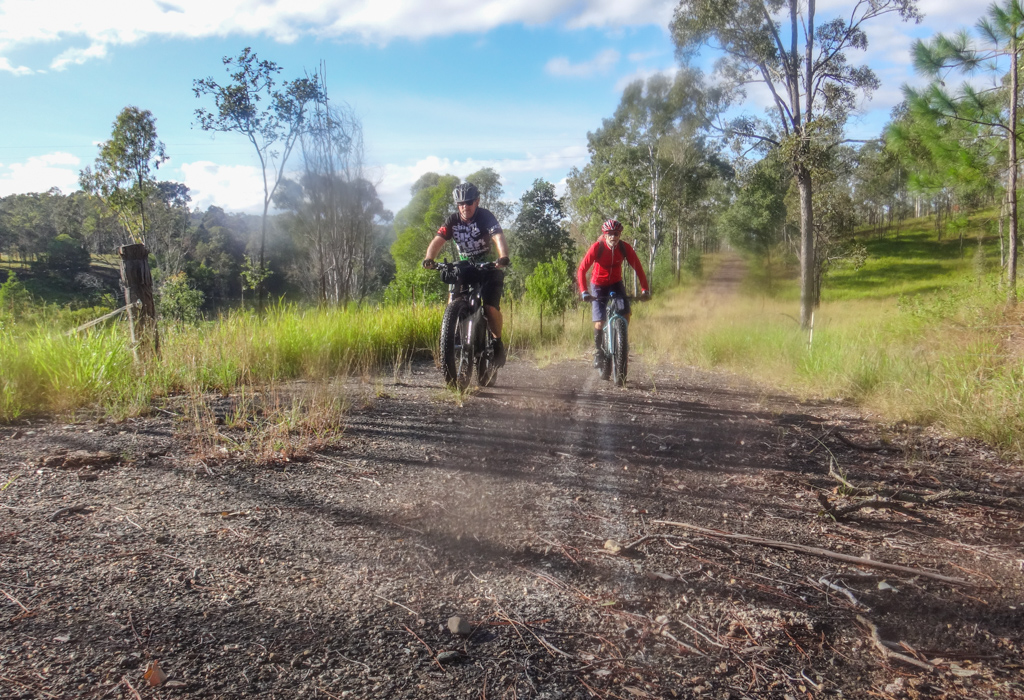 Eventually we emerged on a strange-looking trail. A paved road, complete with a double-white centre line, almost entirely covered in grass and twigs.

Fifty years ago, cars used to buzz along this road between Petrie and Dayboro. This stretch once linked Rush Creek Road near Dayboro to Adsetts Road on the other side of Forbes Creek at Whiteside.

Then in the 1970’s, the government built the North Pine Dam. The ensuing lake flooded small towns, farms, and roads like this one. A road which ended at the shoreline of a new lake was not much use to commuters, and so the government built Dayboro Road, leaving this old dead-end track to slowly revert back to grassy fields. 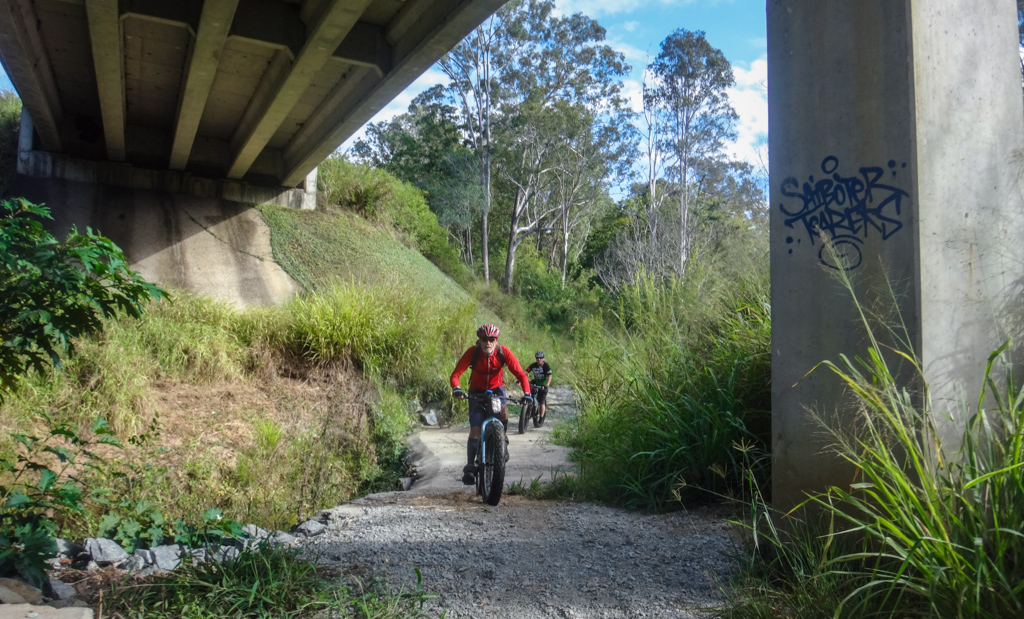 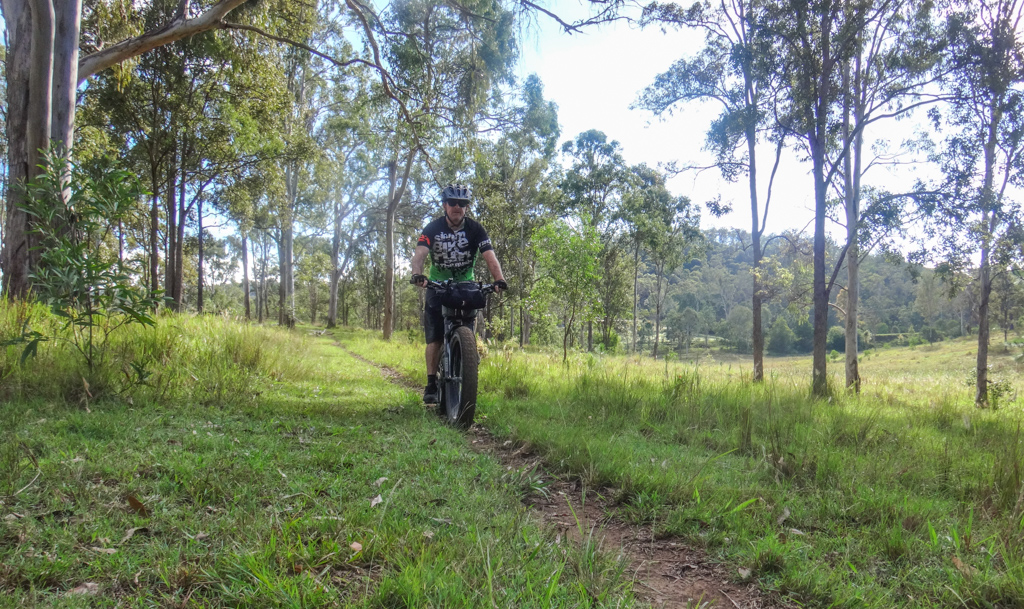 We followed some cattle tracks back towards the lake… 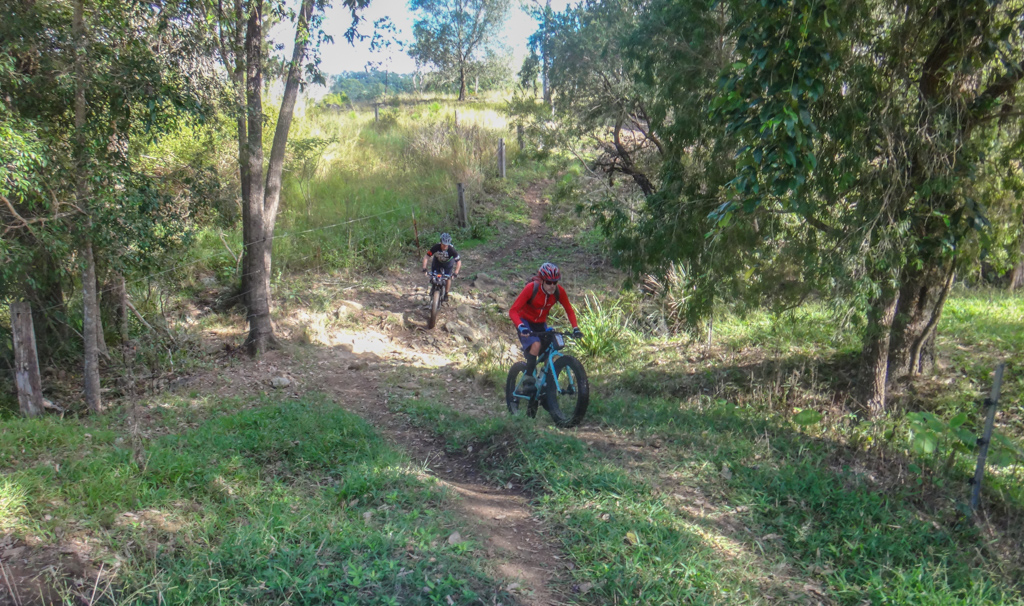 …and over a bumpy creek crossing. 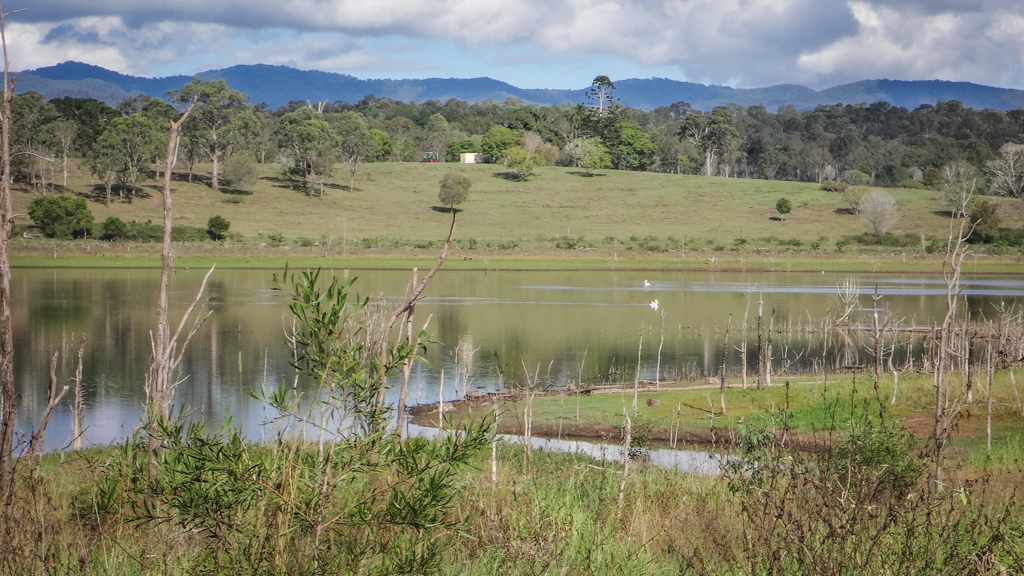 Our route now followed the lake shoreline eastwards, back towards Petrie.

On our right, the D’Aguilar Range reflected quietly in still water, and a solitary hoop-pine towered above the scrub. Before settlement these valleys were thick with hoop pines – settlers describing them as being “as thick as the hairs on a cat’s back”. 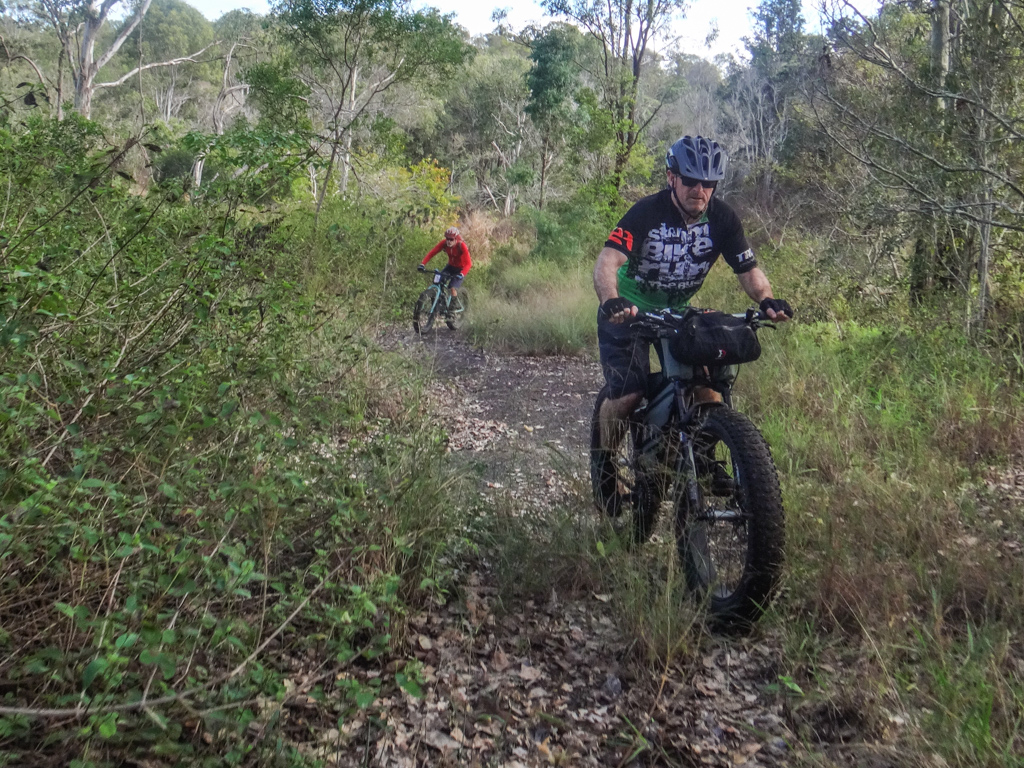 The old paved road poked out again from underneath patches of Lantana. 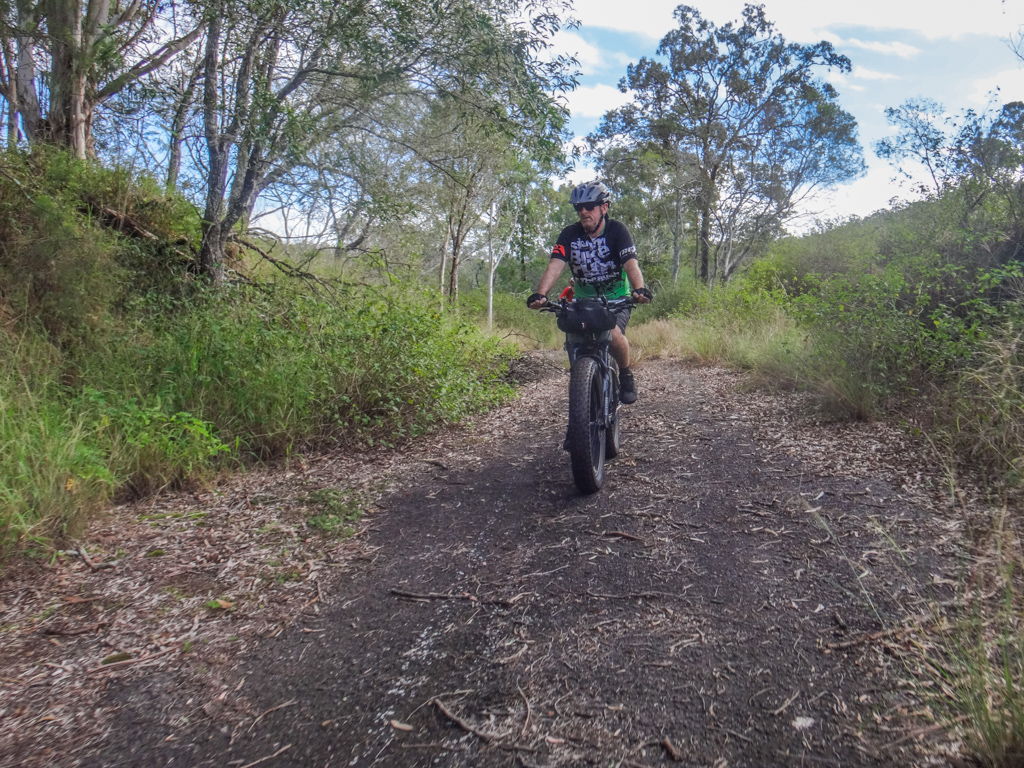 The white centre-lines were barely visible as the old thoroughfare succumbed to the ravages of time. 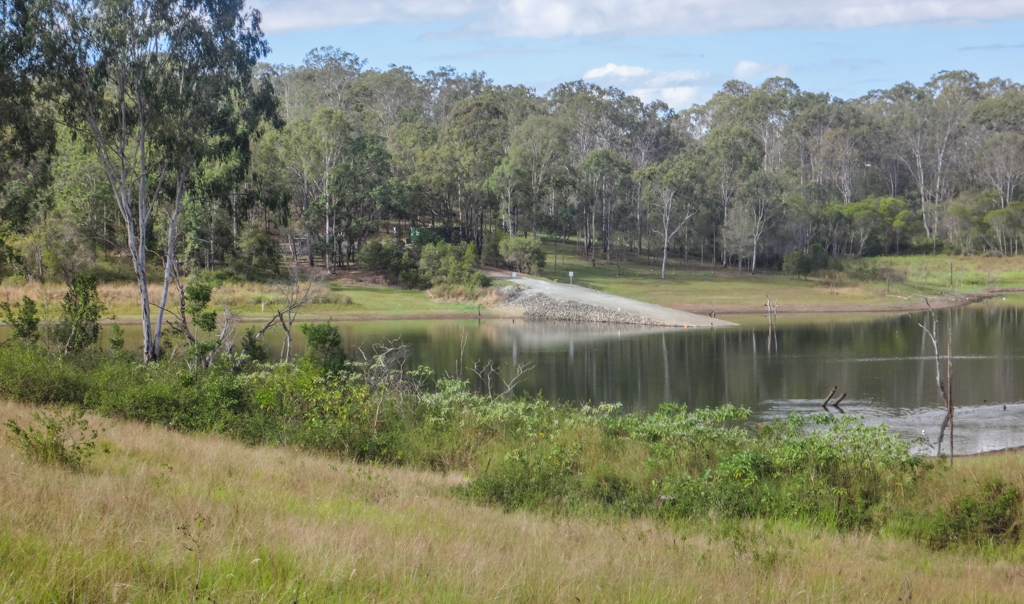 The road disappeared under the water at the shoreline.

On the other side it emerged as a boat ramp at the end of Adsetts Road. Rather than let it go to waste, the local fishing club now uses it as a launch spot for their boats. 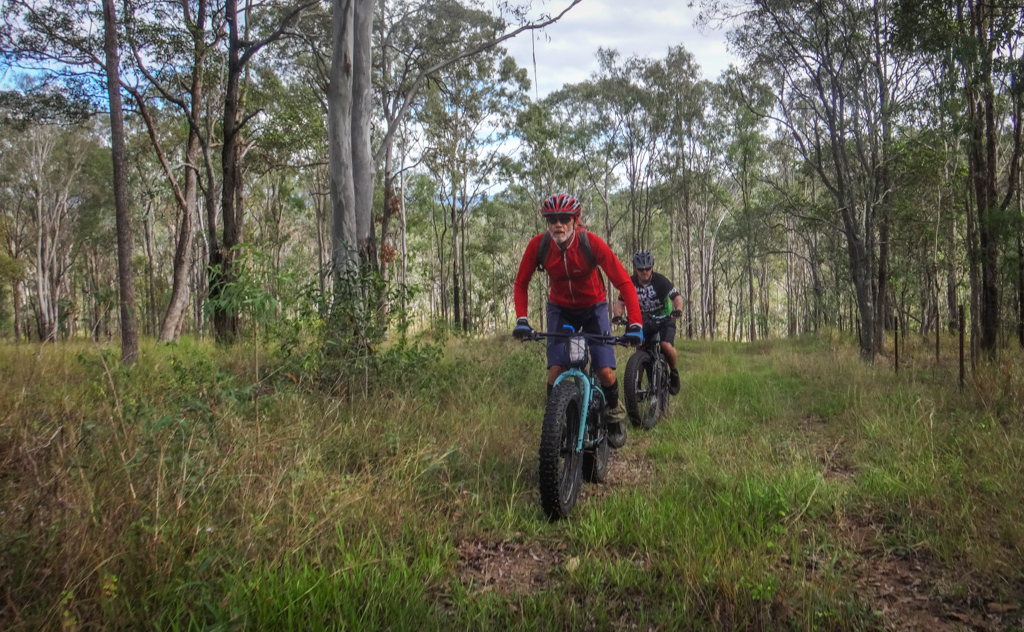 Unable to follow the road any further, we skirted the edge of the lake, looking for faint tracks. 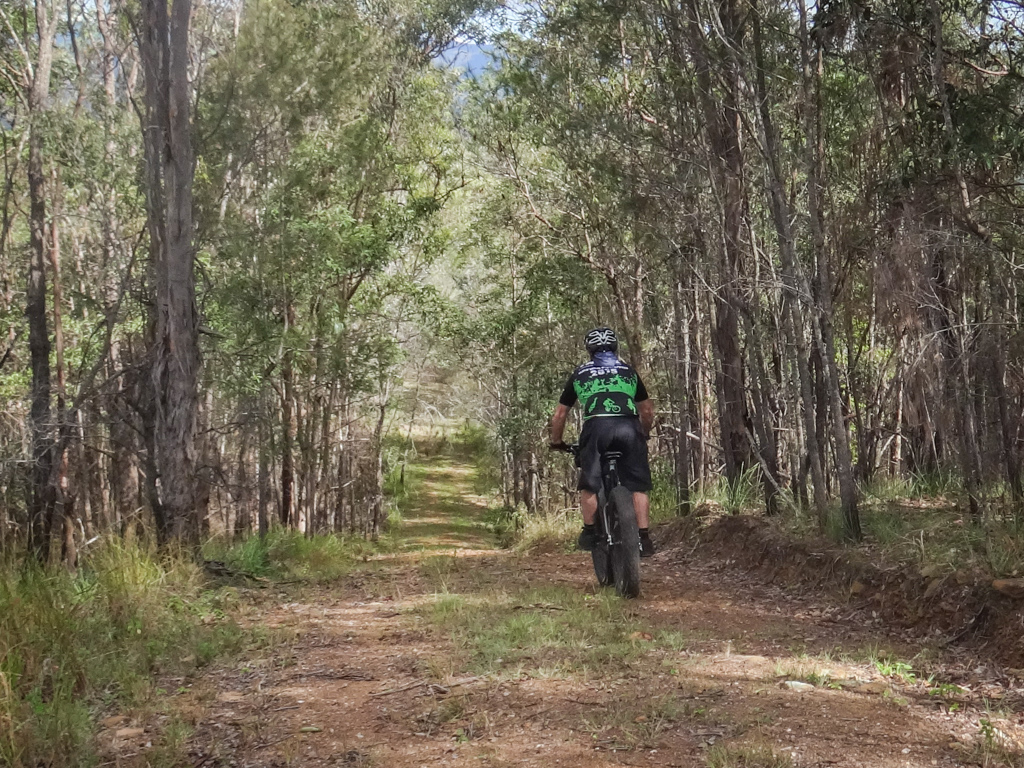 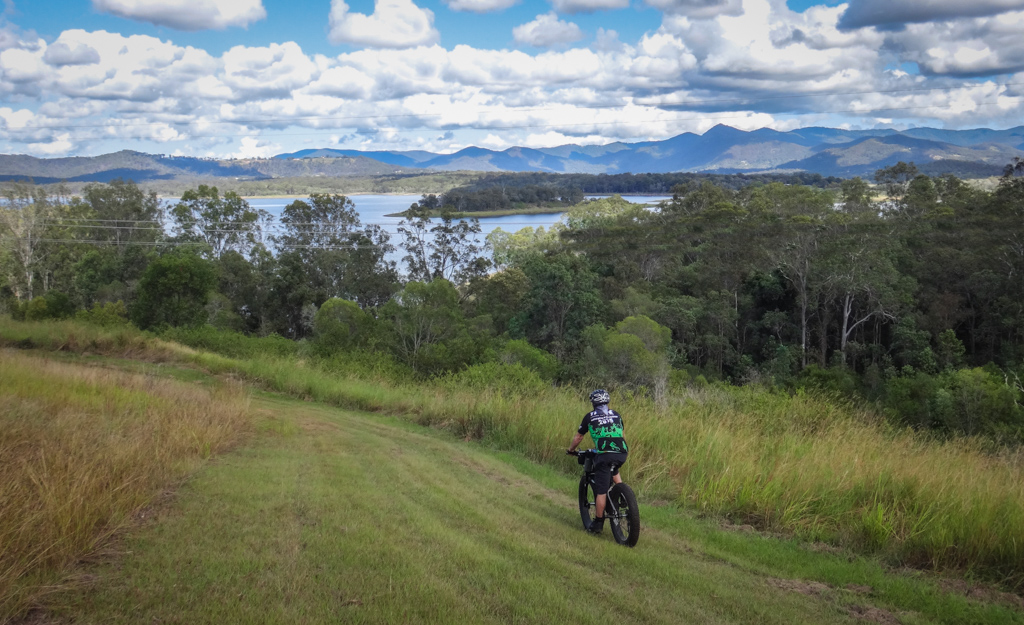 The familiar triangular peak of Mount Samson rose above the range on the horizon.

Somewhere beneath all that water lay old farms, roads, and forgotten villages such Harrisons Pocket and Samsonvale. 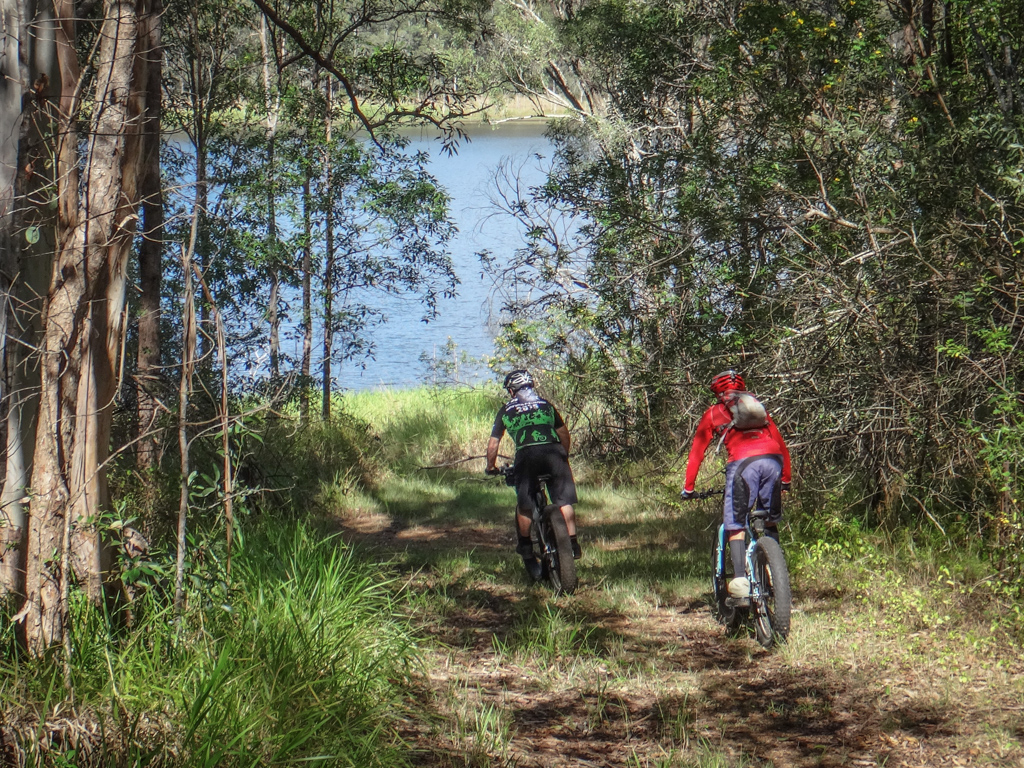 We rolled down what remained of “Barnes Road” – another old track which now ended at the shoreline. 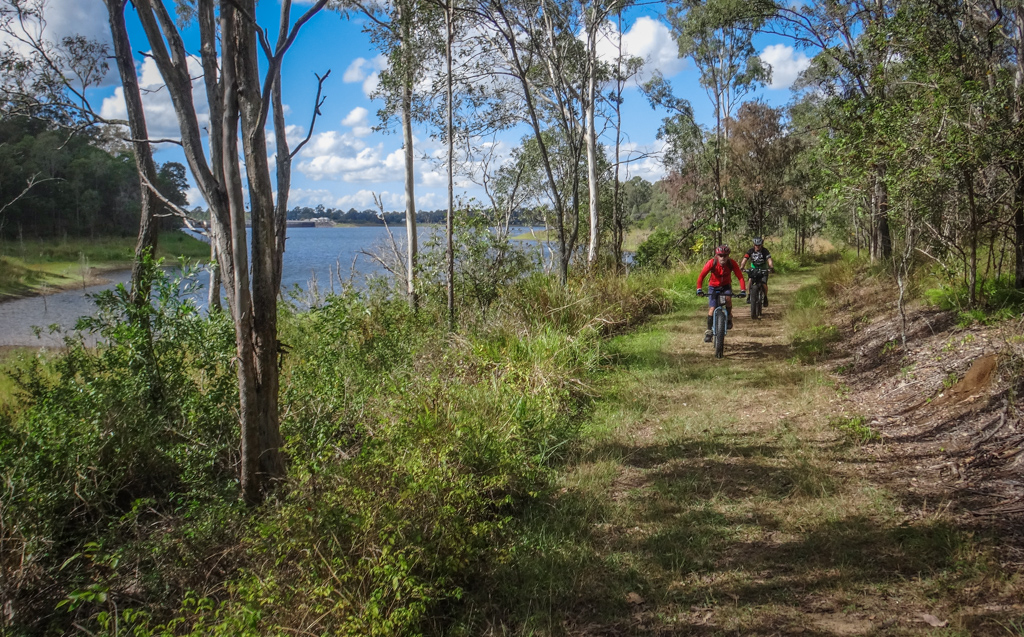 We were now close to the dam wall itself. Old roads had vanished completely replaced by maintenance tracks which followed the shoreline around numerous small inlets. 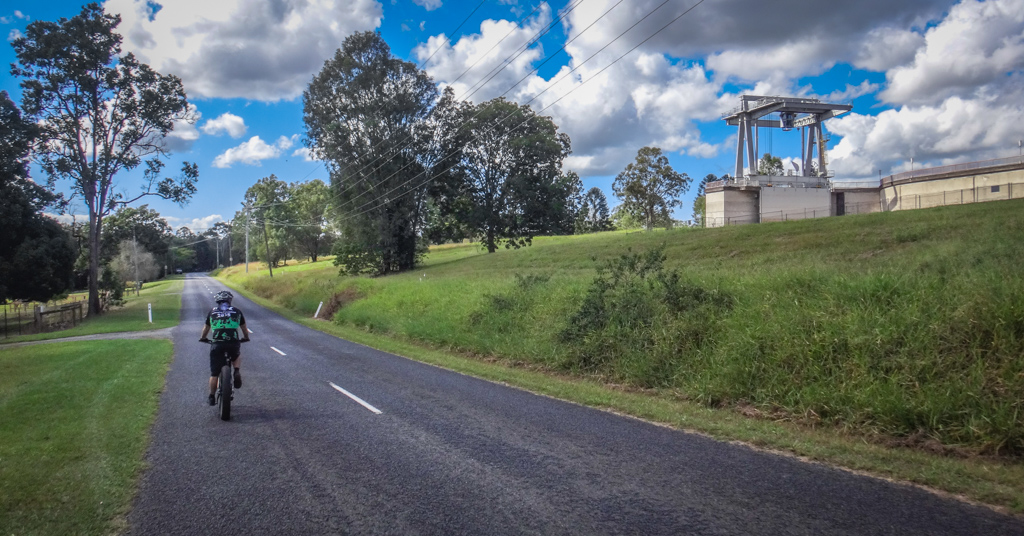 The North Pine Dam was a huge civil engineering project which permanently changed the landscape over a large area of the region. Much of the early history of this area now lies submerged.

After witnessing the slow steady decline of old roads, I sometimes wonder how permanent these huge projects really are. 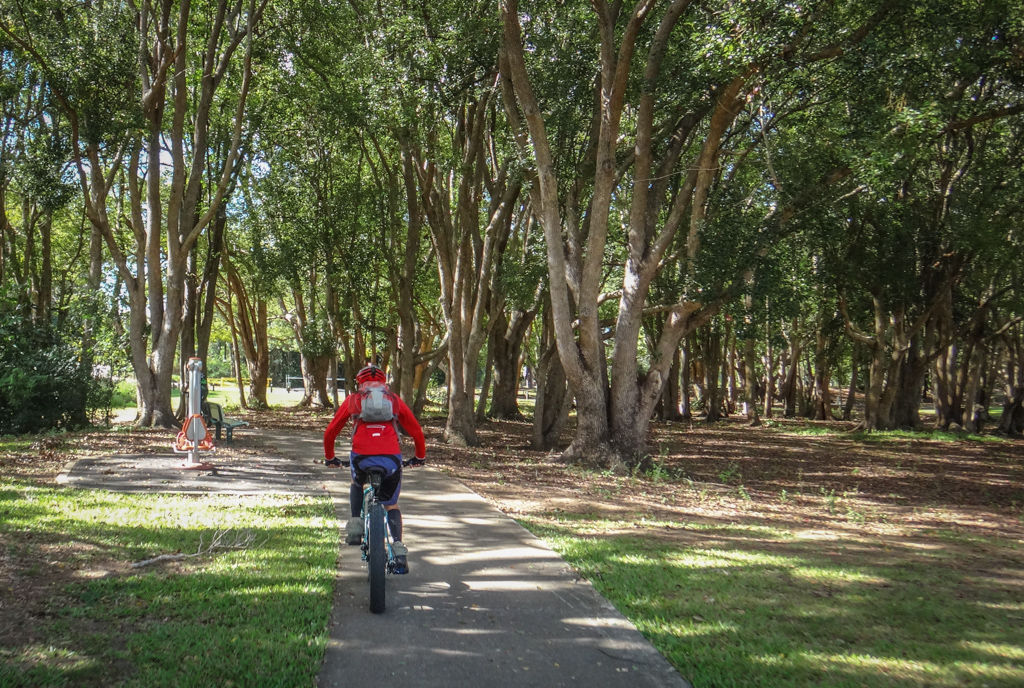 One final “old road” greeted us in the middle of a playground in Sweeney Reserve at Petrie.

This stand of old figs and camphor laurels straddles what was once the old Bruce Highway.

Once upon a time “Gympie Road” came through here in a lazy “S” bend, emerging near the court-house at Petrie. A series of floods washed it away. What remains is this peaceful park.

All up we travelled 47km in just under 5 hours. Darb rode to my place, so he travelled an extra 20km.

Thanks Darb and Calum for a fun day out on the bike! 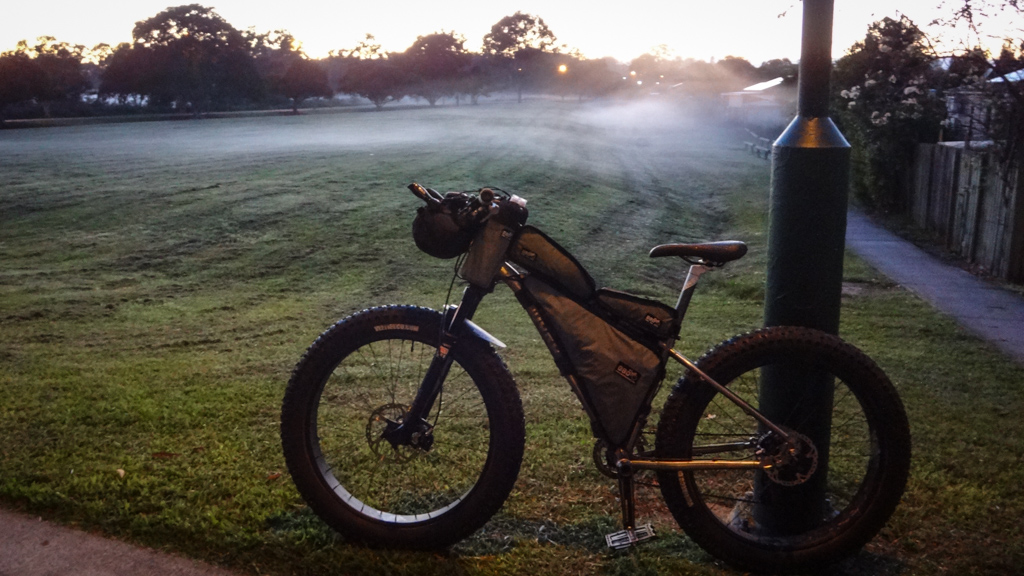