The purpose of today’s ride was to explore some of the history around Jimna as we followed twisty forest trails high in the Conondale Range. 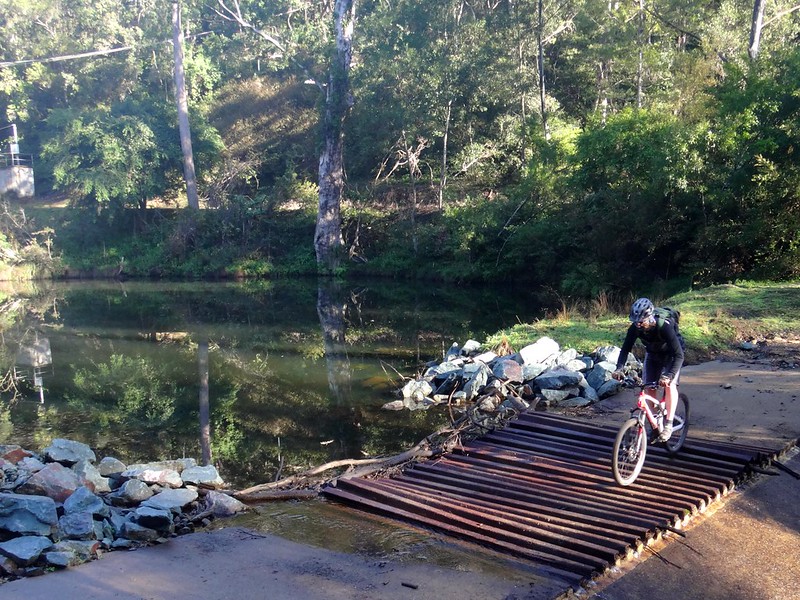 On a misty winters morning we rolled out of Jimna past the small weir which supplies water to the small town. 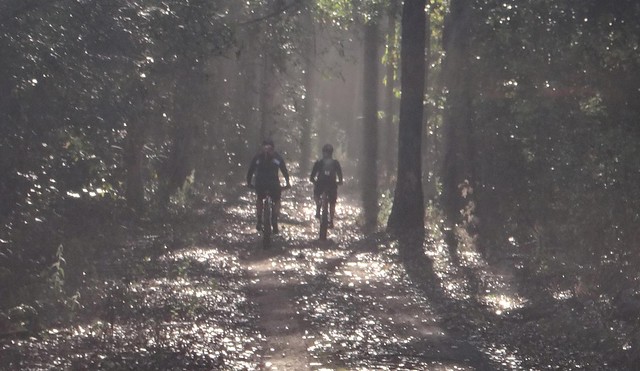 Overnight rain had moistened the trails without making them too muddy, leaving cool wisps of fog in the shady forest. 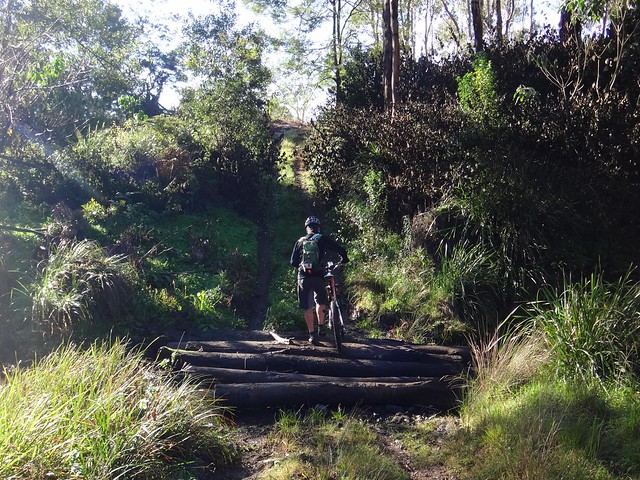 In the 1860’s alluvial gold was discovered in the headwaters of Jimna Creek. The first prospectors made reasonable returns in the early years. Eventually the gold in the creek beds ran out, and miners started digging for the precious metal with decreasing returns.

This corduroy bridge crosses the creek near where the original Jimna township was located, close to the first gold mining camps. 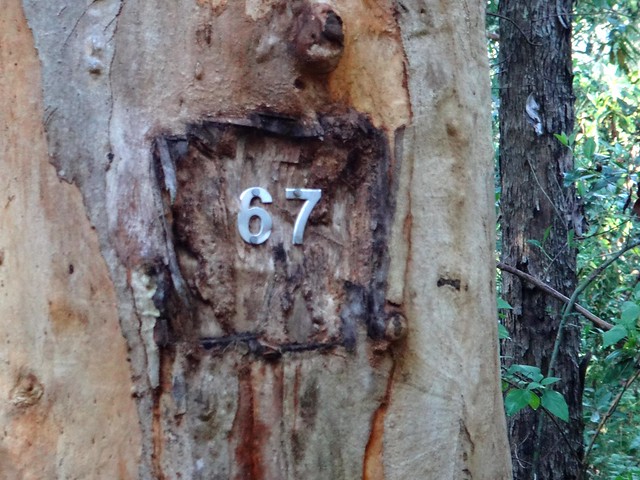 One of the last gold miners in the area was “Stumpy” Green, who eked out a simple existence in the area for over sixty years before he passed away in 2005.

His hut was located not far from here on the banks of Gigher Creek near Mount Rollman.

An amatuer fossicker who spoke with him in the 1970’s says this old miner had a simple approach to gold prospecting: “Seek and ye shall find. Don’t just dig the top stuff – dig down. Put the work in once you’ve found colour.” 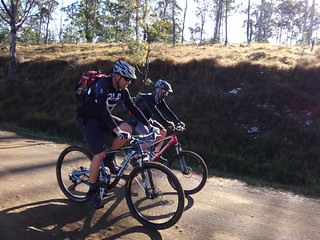 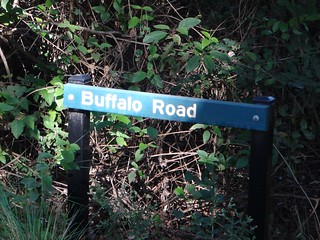 We climbed out of the creek, eventually reaching Sunday Creek Road, and rode east for a few kilometres towards Buffalo Road. 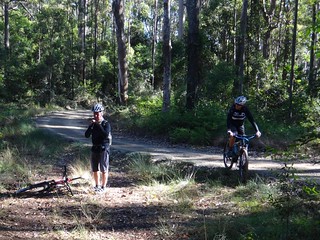 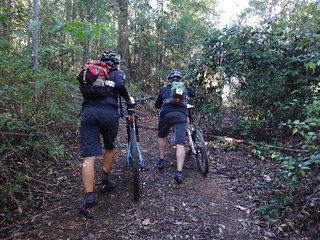 Leaving the smooth and easy road, we pushed up Buffalo Road deeper into the forest. Eric decided he’d take it easy and walk his bike up the hill, so Paul and I followed suit and took it easy as well. 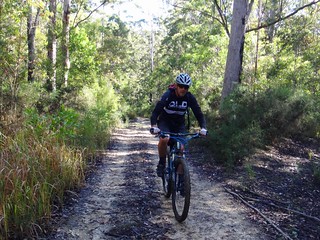 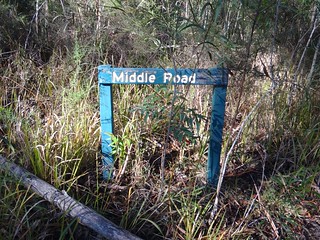 From there we found Middle Road and enjoyed a pleasant long descent to the causeway at Six Mile Creek. 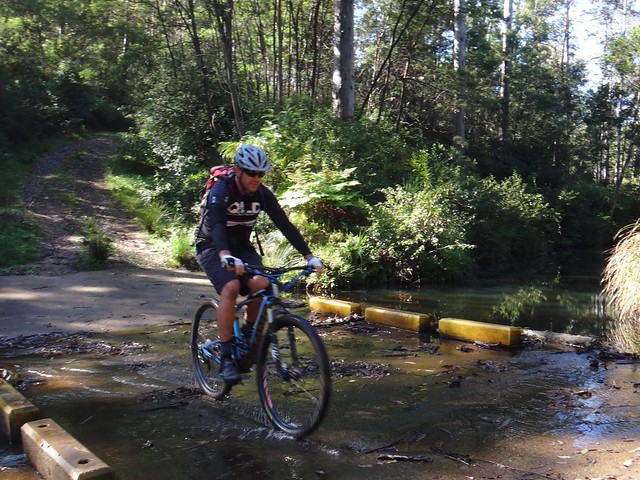 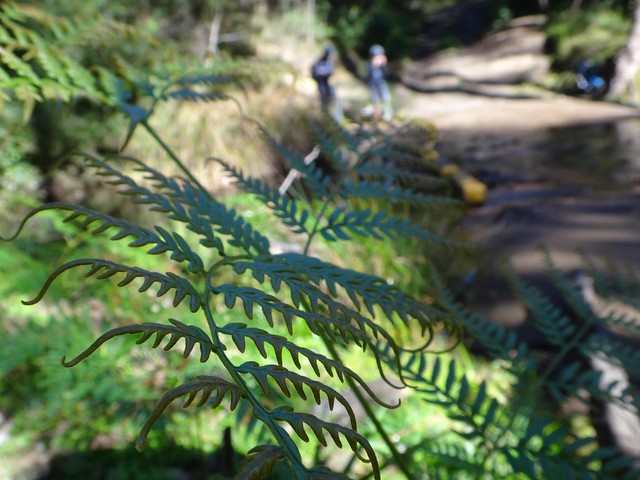 The creek bank was the perfect spot for a rest and a quick morning tea break. 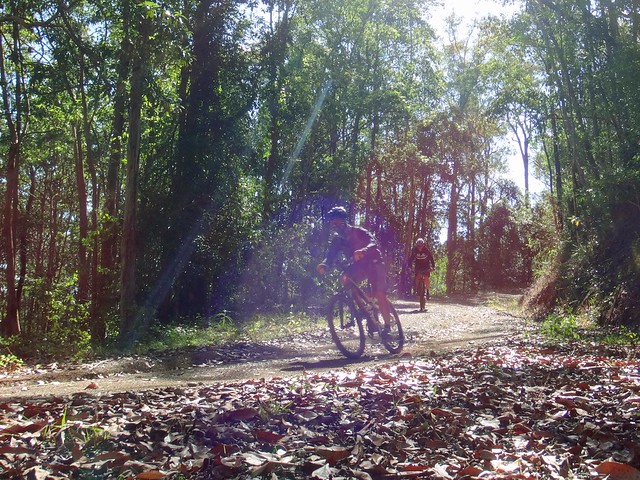 After climbing back up to the top of the range again, we enjoyed a gentle 5km descent down the western slopes towards the timber plantations around “Ponderosa” station. 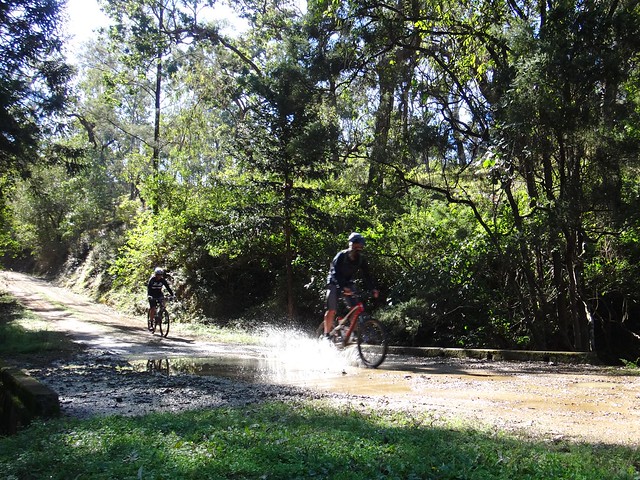 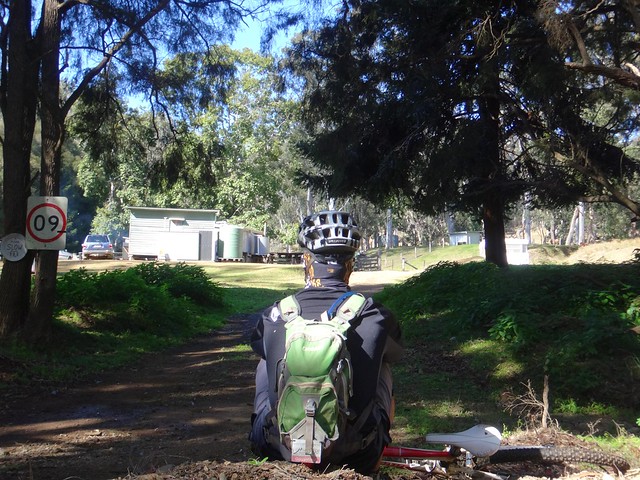 There’s a small hut at the bottom of the hill close to a pretty creek. We weren’t trying to break any speed-records today so we decided to have another break on another shady creek bank. 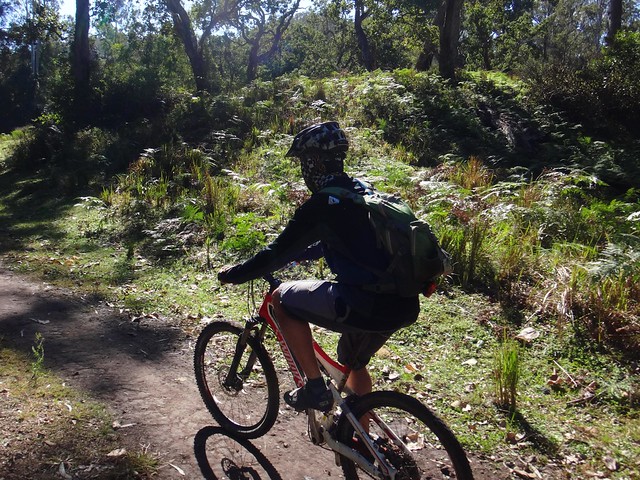 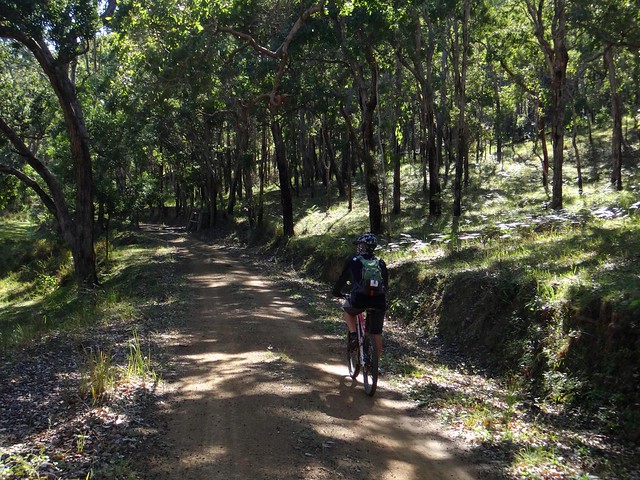 Ponderosa Station is a large cattle property on the rolling hills at the western foot of the Conondale Range. 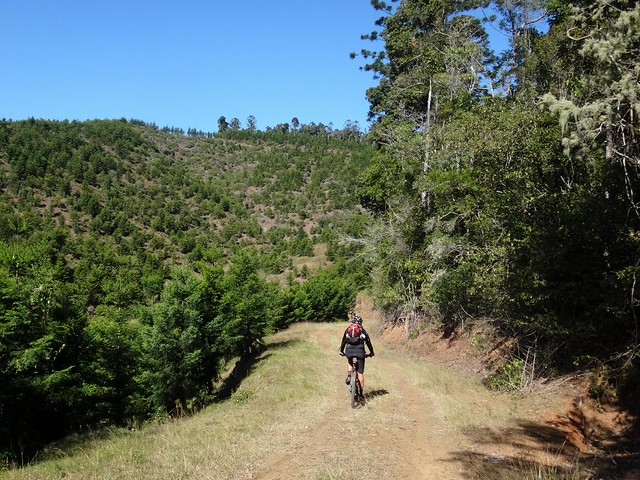 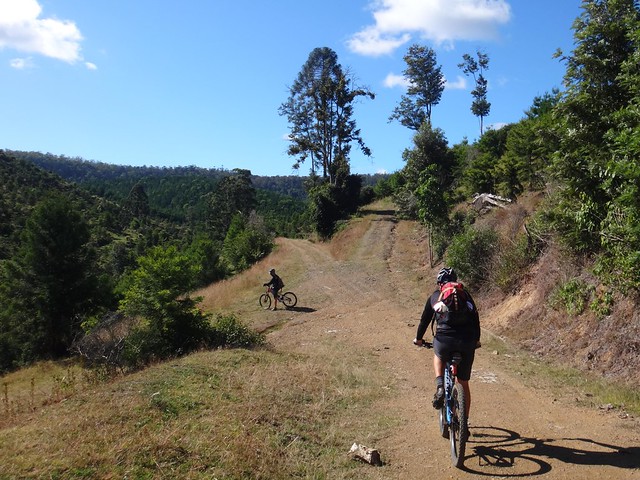 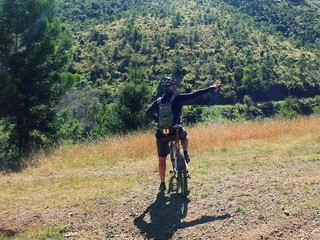 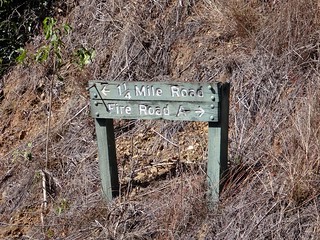 Some of the terrain around here is very steep. Paul and I were grateful that Eric had ridden through here the week before to identify tracks that would be suitable to ride. 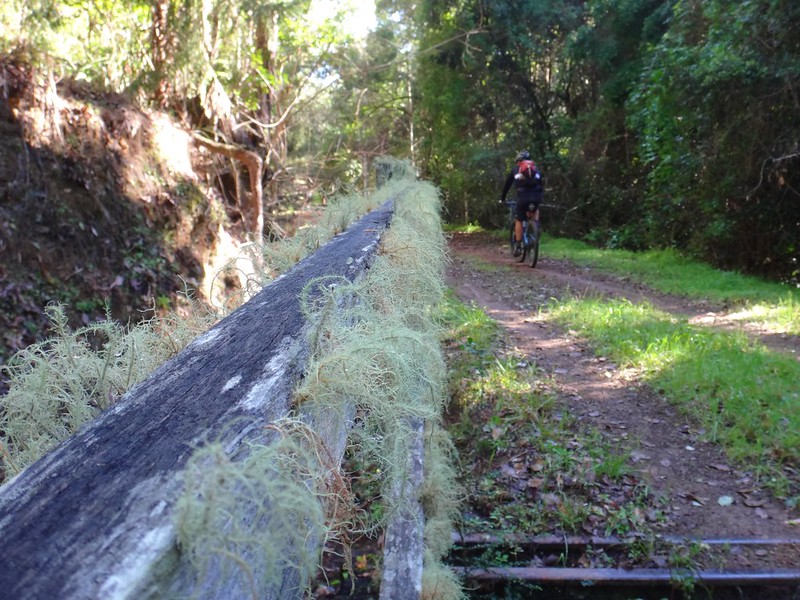 Several times we bumped over cattle grids passing from Farmland to State Forest and then National Park. Some of the land round here doesn’t see much sunlight, and moss grows thickly on any bits of damp wood. 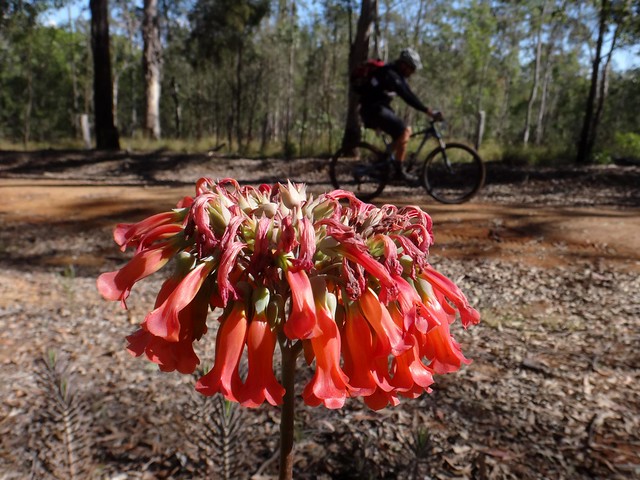 We eventually reached Monsildale Road – a steep climb from the valley back up to Jimna on top of the range. 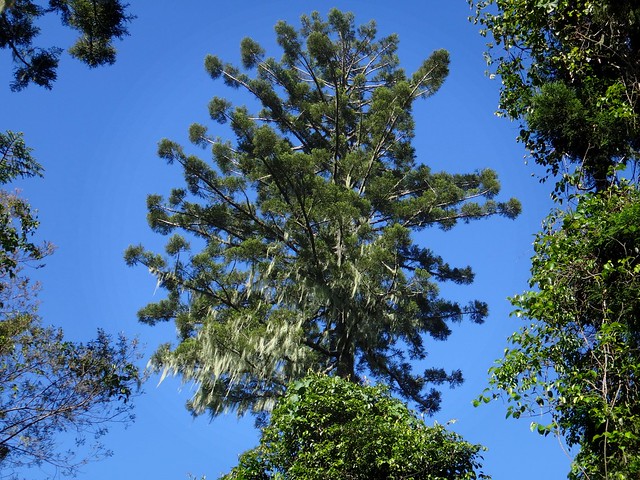 The Hoop Pine plantations around here stretch on the hillside as far as the eye can see.

I stopped to admire some “Old Man’s Beard” moss draped on the boughs of one particular pine.

“Why don’t you hug it?” Paul grunted as he pedalled past me, slowly working his way up the hill.

“Coz I’d have to push through too many weeds” I answered silently under my breath. 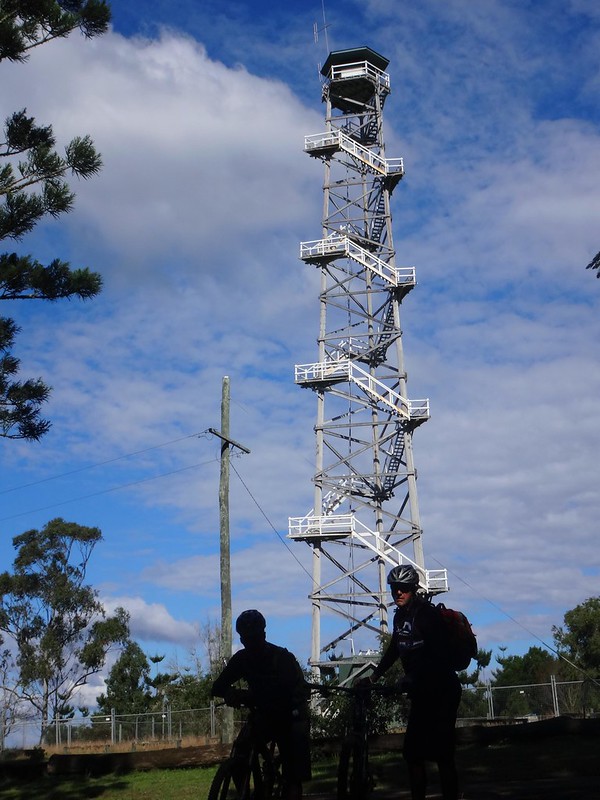 The hill climb brought us out at the top of the hill near the famous Jimna Fire Tower.

At almost 50 metres in height, this wooden tower is the tallest of its type on this side of the planet. Due to lack of maintenance it is fenced off, which prevented us from climbing up to get a view, but it still cut an imposing profile on the skyline. 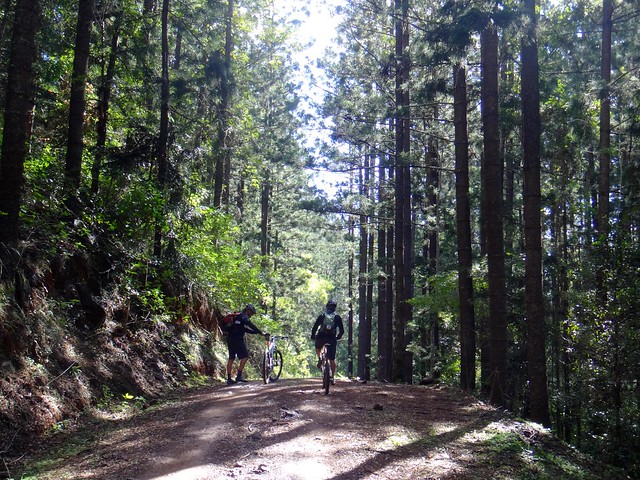 We then rode down Donkey Falls Road to the “Peach Trees” camping area through more Hoop Pine cathedrals. 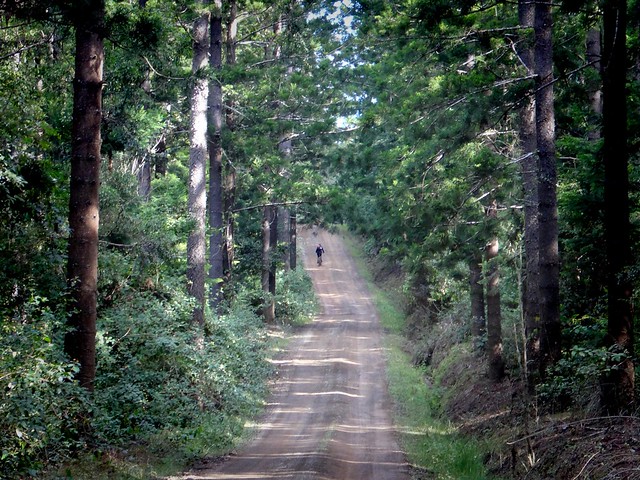 Although I didn’t hug any trees, I did fall behind Eric and Paul as I continually stopped to admire this magnificent forest. 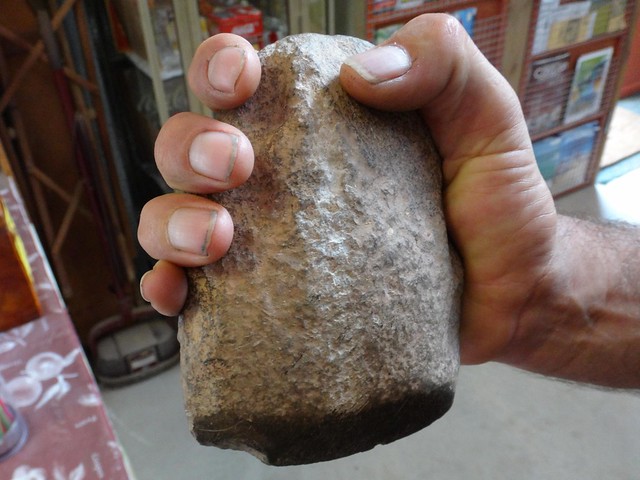 Back at the visitor centre in Jimna, local action group secretary, Dave Wright helped put the history in perspective by showing us an old Aboriginal Stone axe.

This ancient tool had been made by continually rubbing the pointy end on a grinding stone, and used for cutting wood, vines and meat.

It predated Gold Mines and Timbergetting by centuries, and hinted and the rich indigenous heritage of the high country in the Conondale Range.

I felt an electric tingle as I held this special artifact in my hand.

I found it tricky in the winter weather as it was difficult to strike a balance between keeping out the cold breeze, and not overheating on longer climbs. A sleeveless vest over a woollen jersey seemed to do the trick. I imagine this would be a bit harder in the warmer months.

Thanks Eric and Paul for another fun ride!

3 Replies to “Timber and Gold”