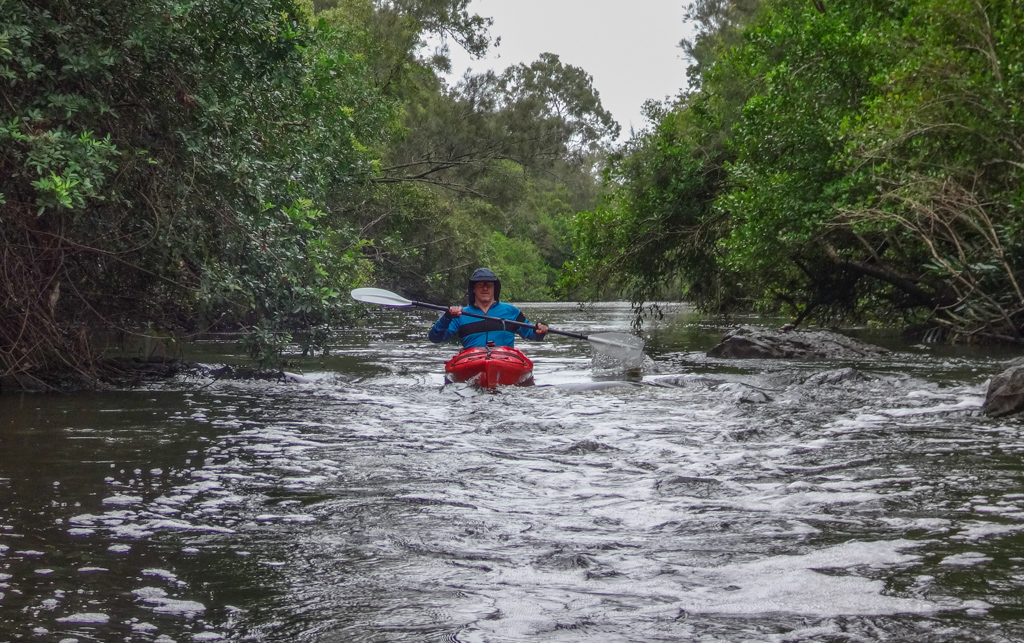 It had been raining for a few days, with more forecast. The tides were high. The decision was easy: we’d leave the bikes at home and paddle up a delightful tidal creek for a few hours instead. 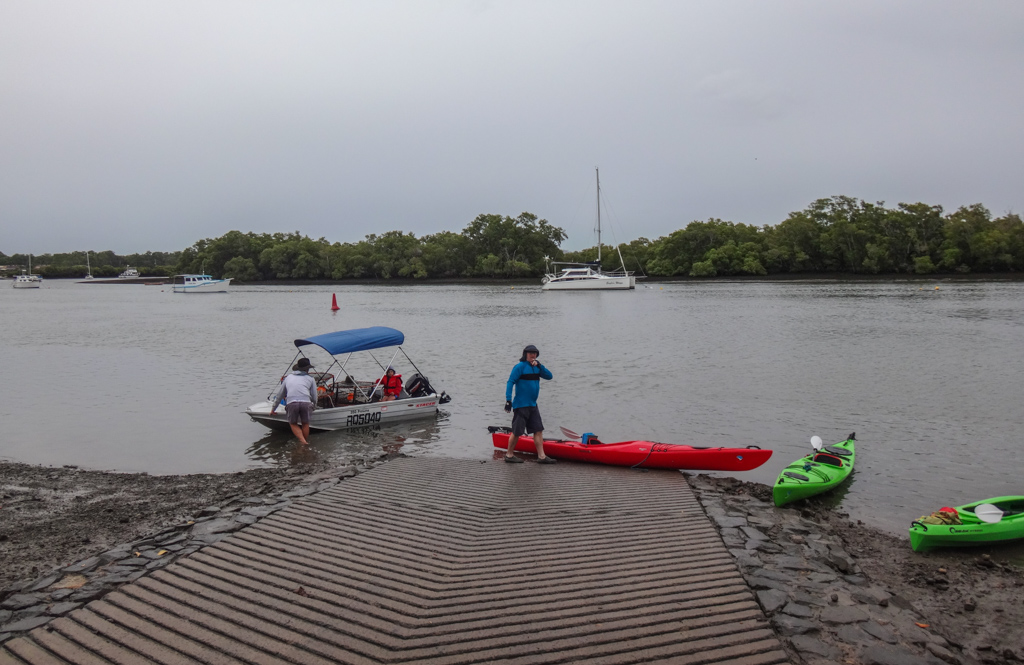 We parked the cars there, and dragged our trusty boats down to the water.

Darb was excited to try out his new kayak. 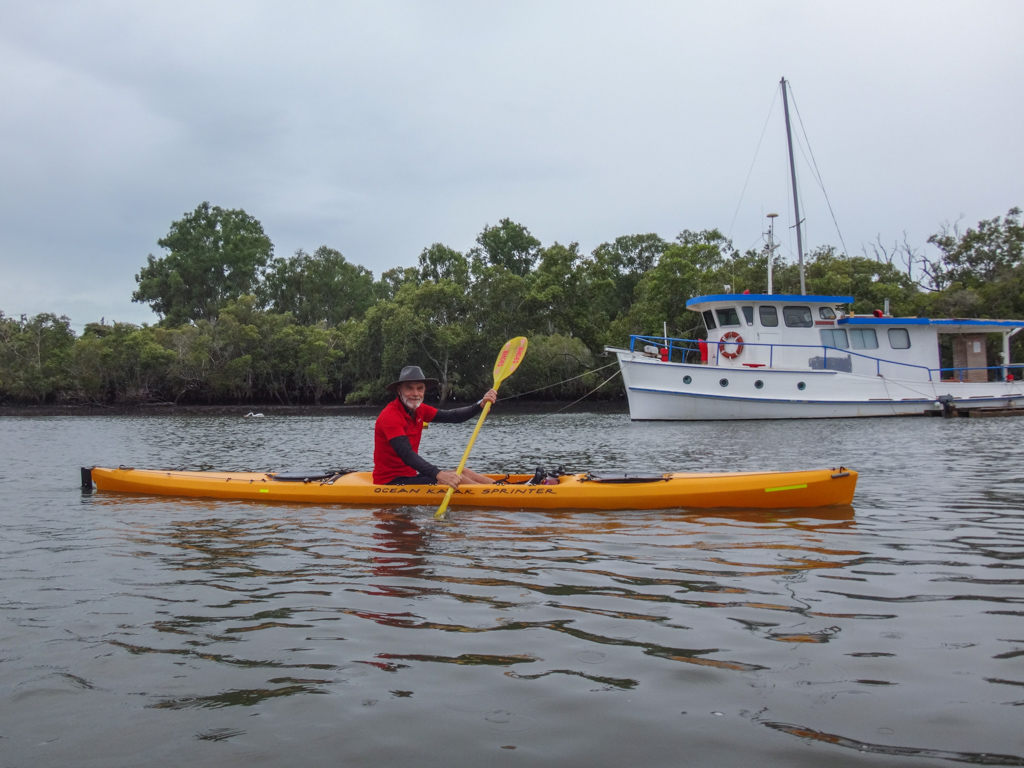 We had an incoming tide: the water would be flowing upstream all morning.

It would be like riding downhill for a few hours.

We were all happy and relaxed. 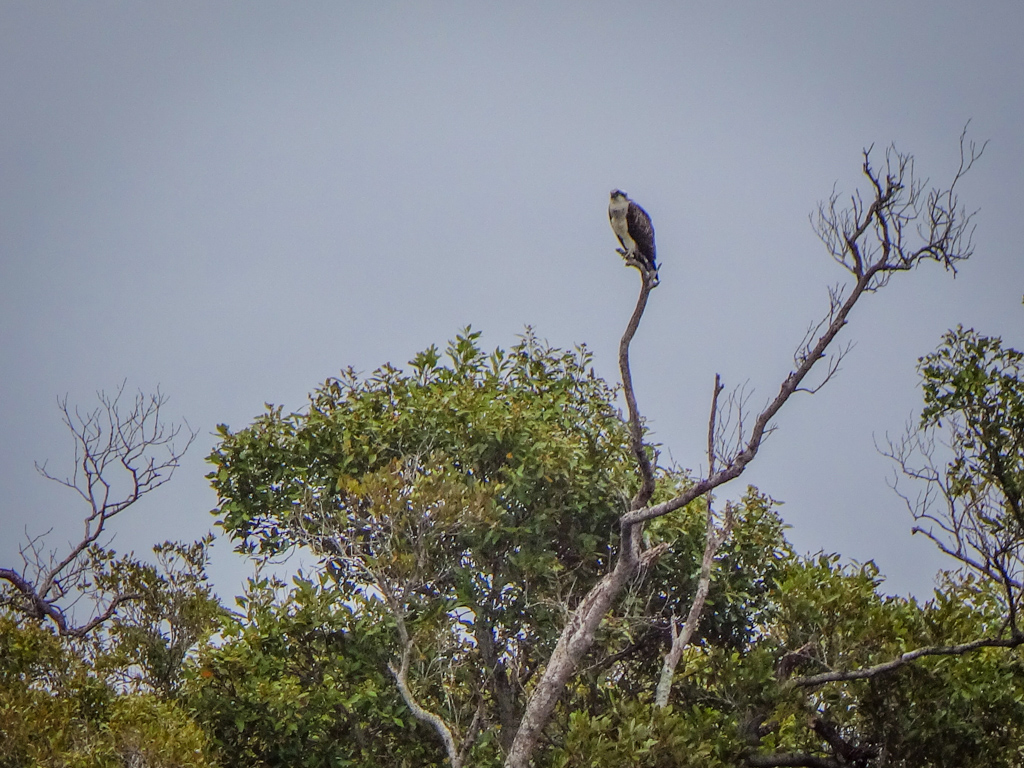 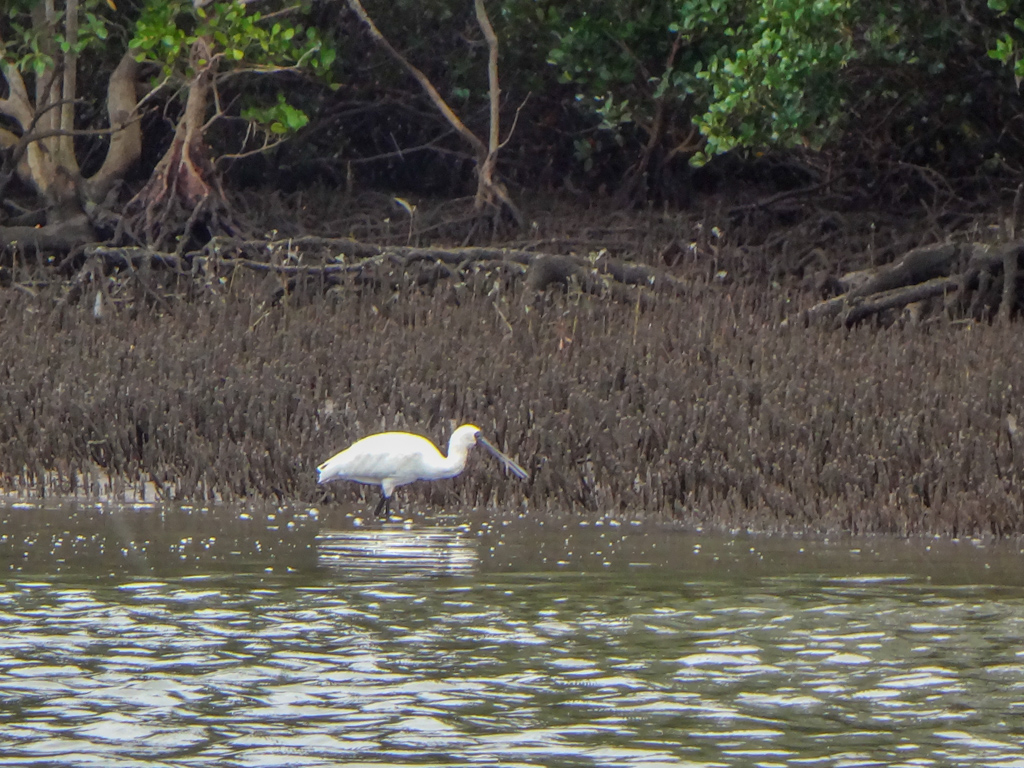 Tingalpa Creek is flanked by healthy wetlands on either bank. Calum pointed out an Osprey and Spoonbill as we glided past. 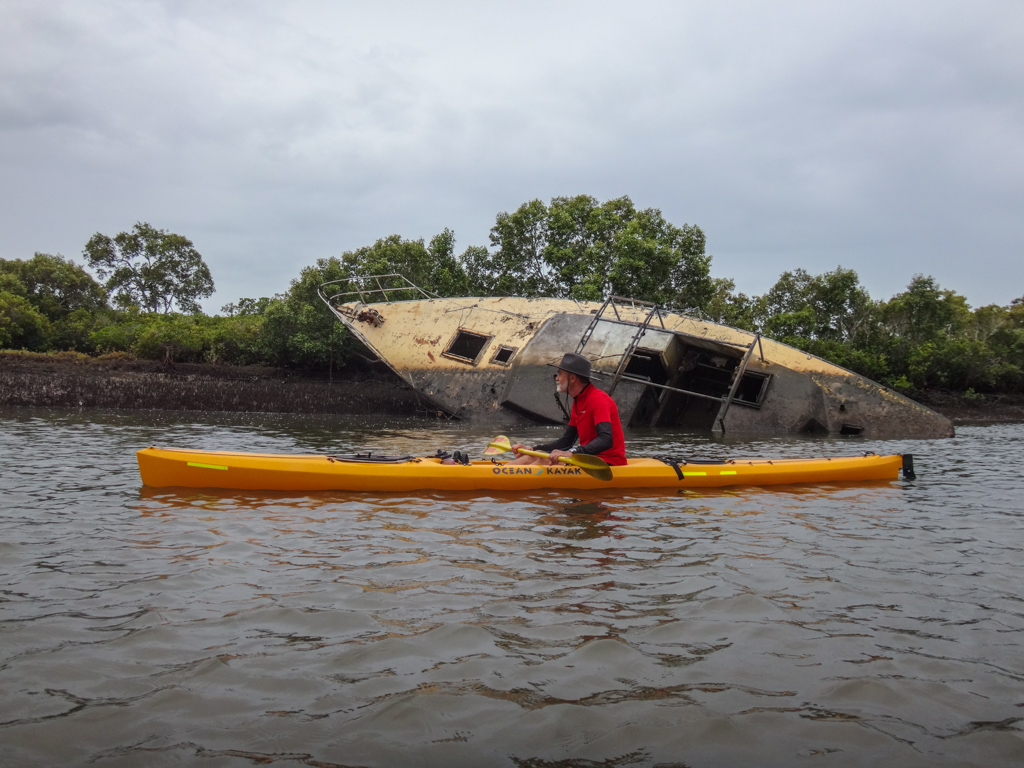 The rusting hull of a sad old yacht rested on its side in the mud.

The two happiest days of a sailor’s life are the day they buy their yacht, and the day they sell it. It looks like the owner of this old wreck never got to experience the second happiest day. 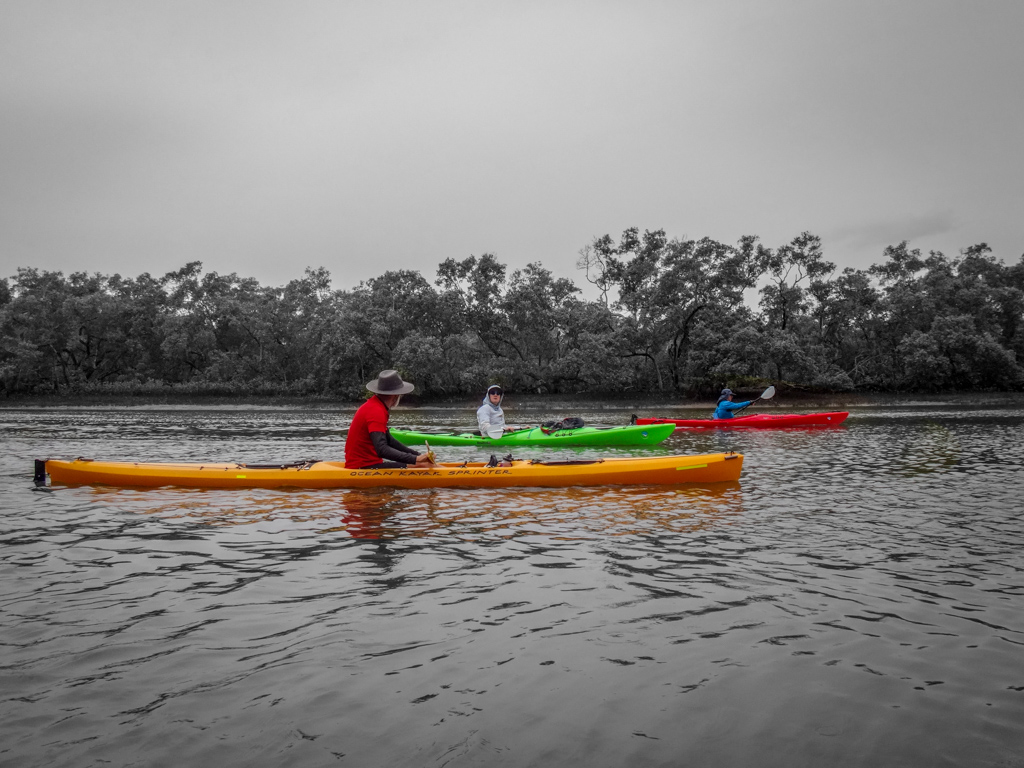 The cool cloudy weather made a welcome change from the recent heat.

Light, almost imperceptible rain fell softly around us. Cool breezes wafted over the bow. We don’t often have such gentle weather during Brisbane summers. 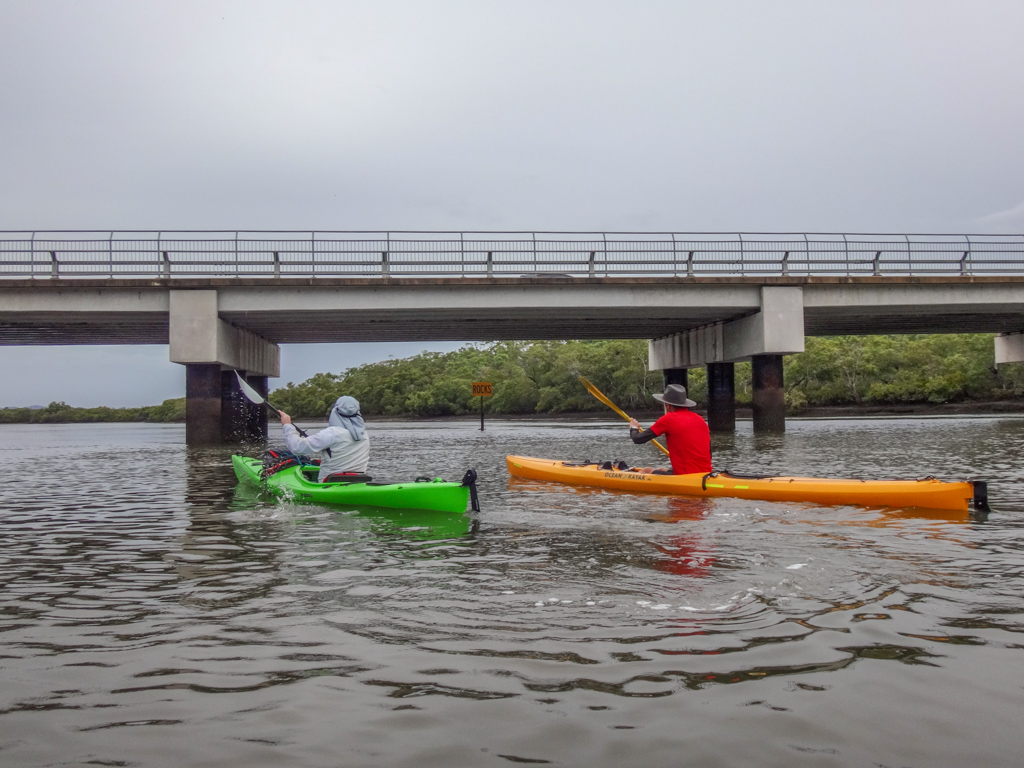 As we slipped under the EGW Wood Bridge, we left Thorneside behind us and continued upstream. 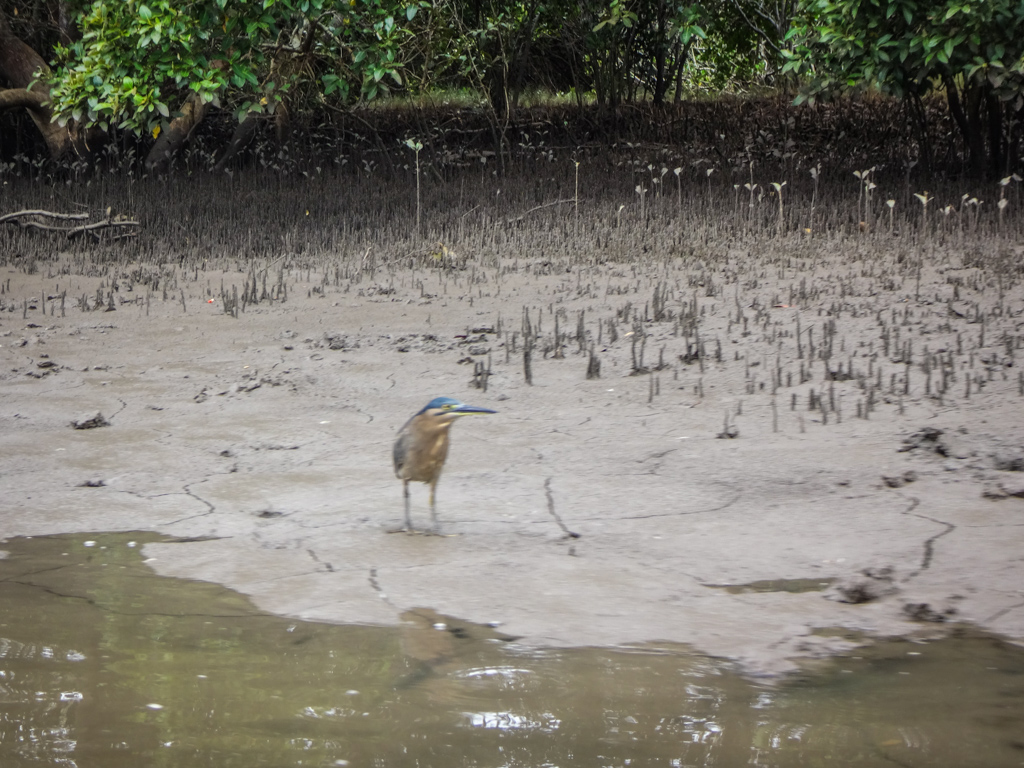 Calum pointed out a Heron wading on the shore.

I focused so much on getting the photo that I didn’t look where my kayak was going, and ploughed into the mud. 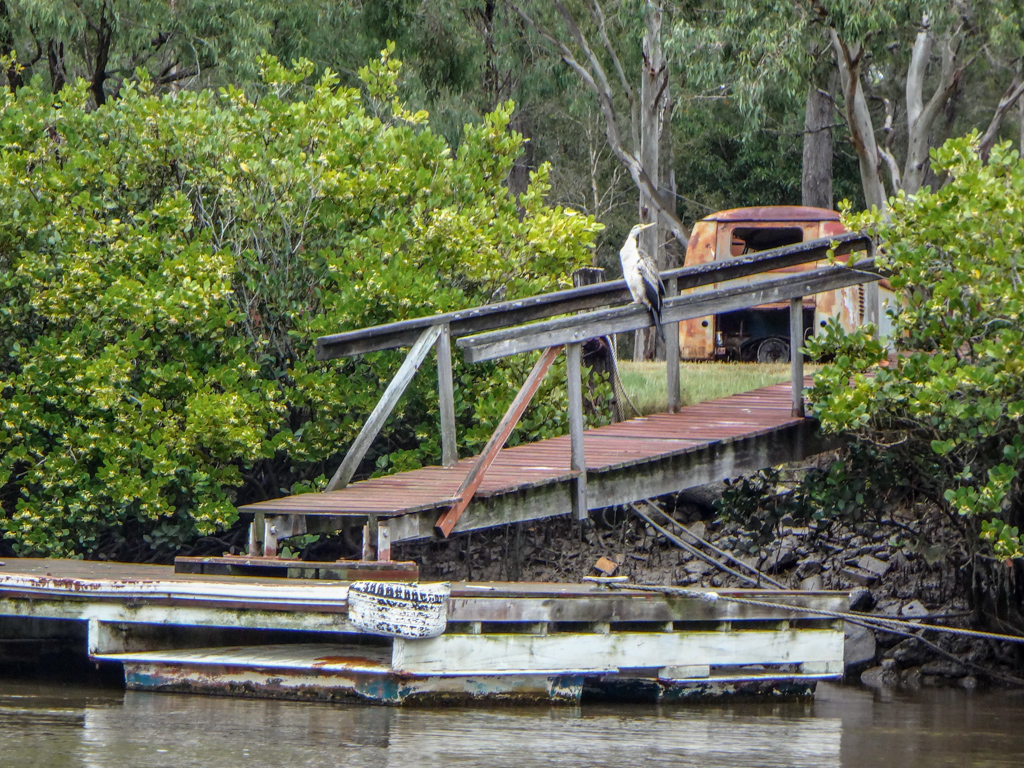 A bedraggled looking bird peered lazily out at us from its perch on a weather-worn pontoon.

Tingalpa Creek followed a convoluted course, twisting back on itself many times.

In a straight line, our destination was a little over five kilometres away. But following the creek, we would have to paddle almost three times that distance.

This creek was no place for anyone in a hurry. 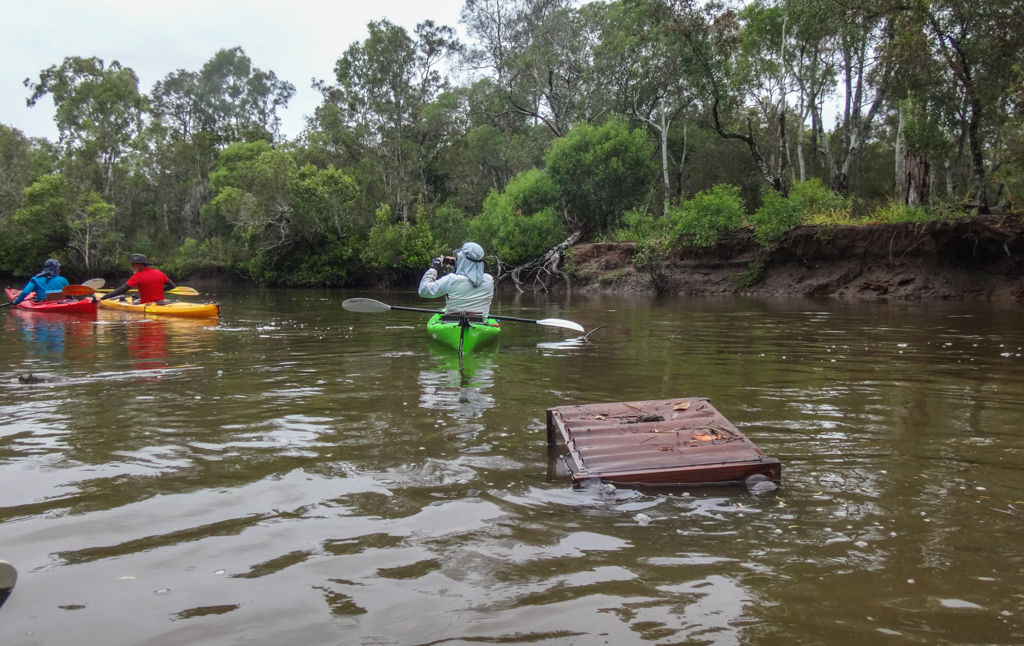 An old wooden chest of drawers floated by.

I poked it with my paddle. Was anything inside?

I decided not to find out – there was more likely to small biting wildlife instead of pirate treasure. 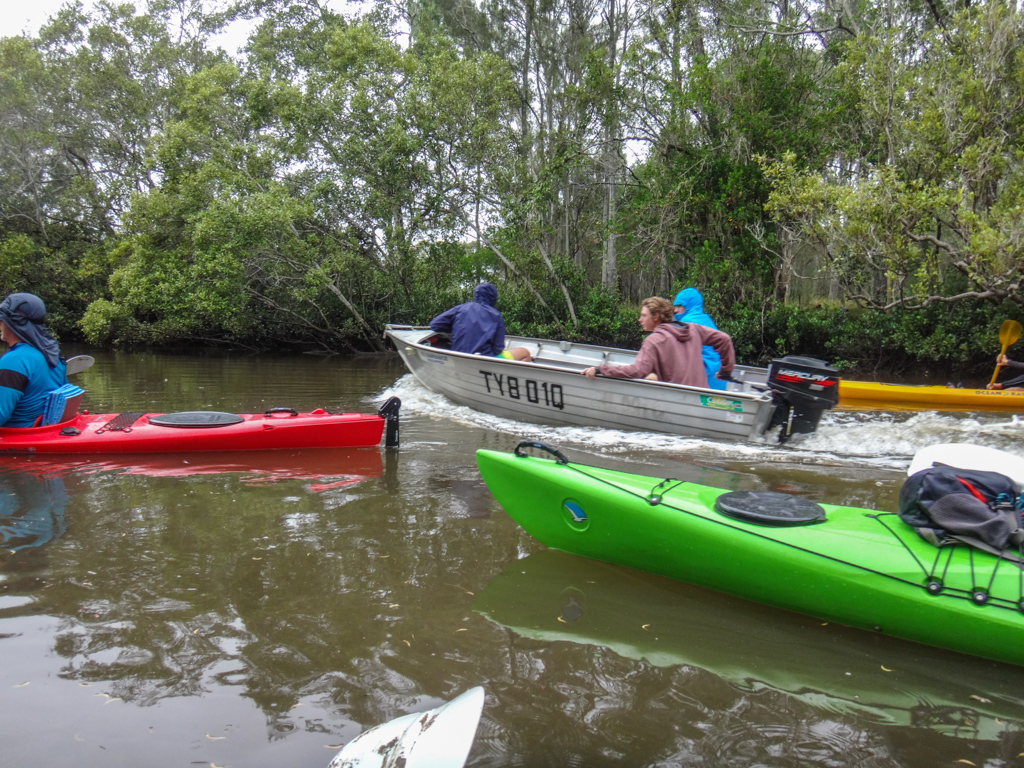 Adam yelled out the quick warning cyclists use to warn riding buddies of an approaching vehicle.

This time a few young fellows swished past in a small “tinny”.

Our small kayaks bobbed frantically in their wake. 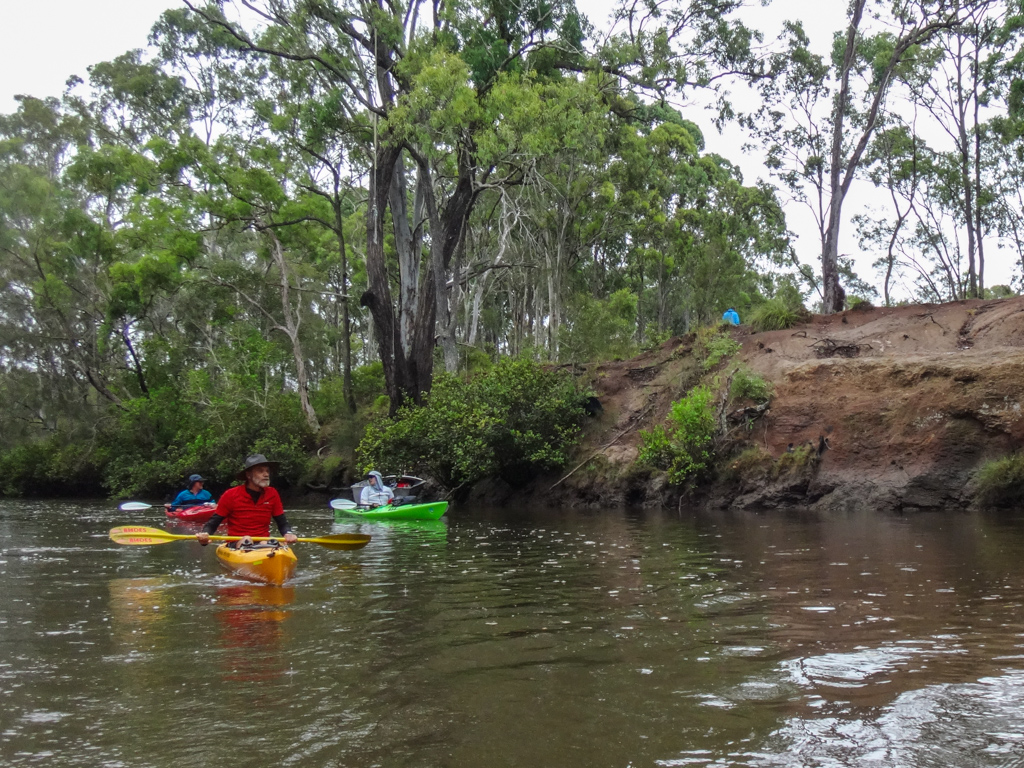 We waited for the waves from the boat to pass before continuing upstream. 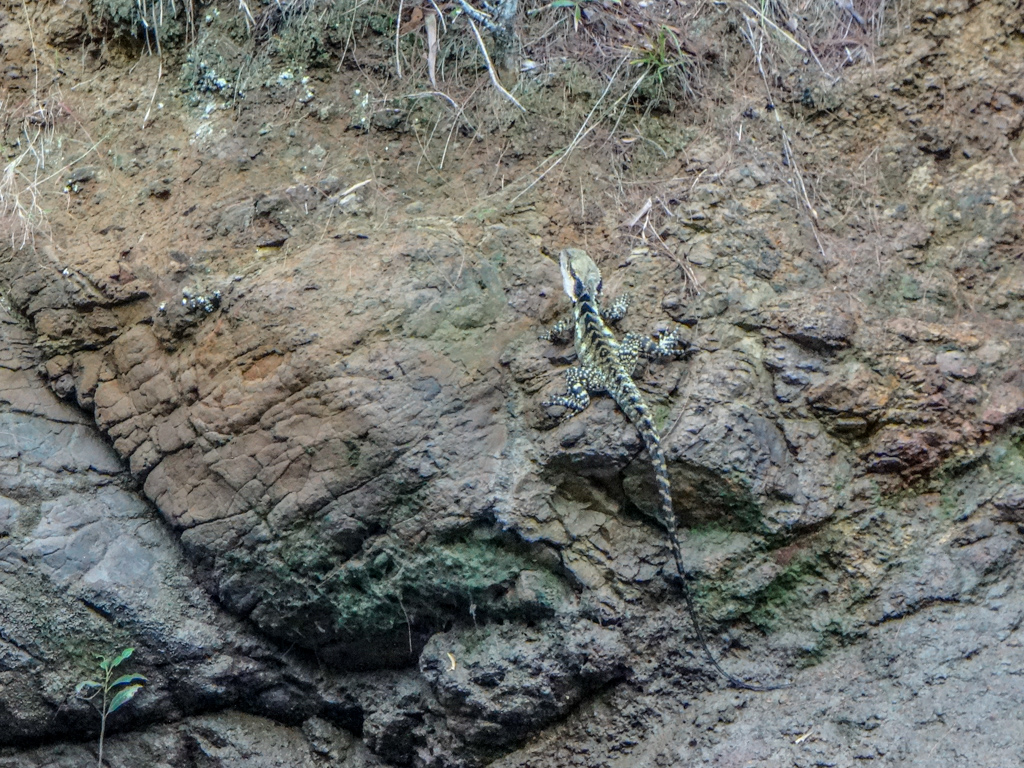 Like brightly a piece of colored aboriginal rock-art, a water dragon clung tenaciously to the rocky banks. 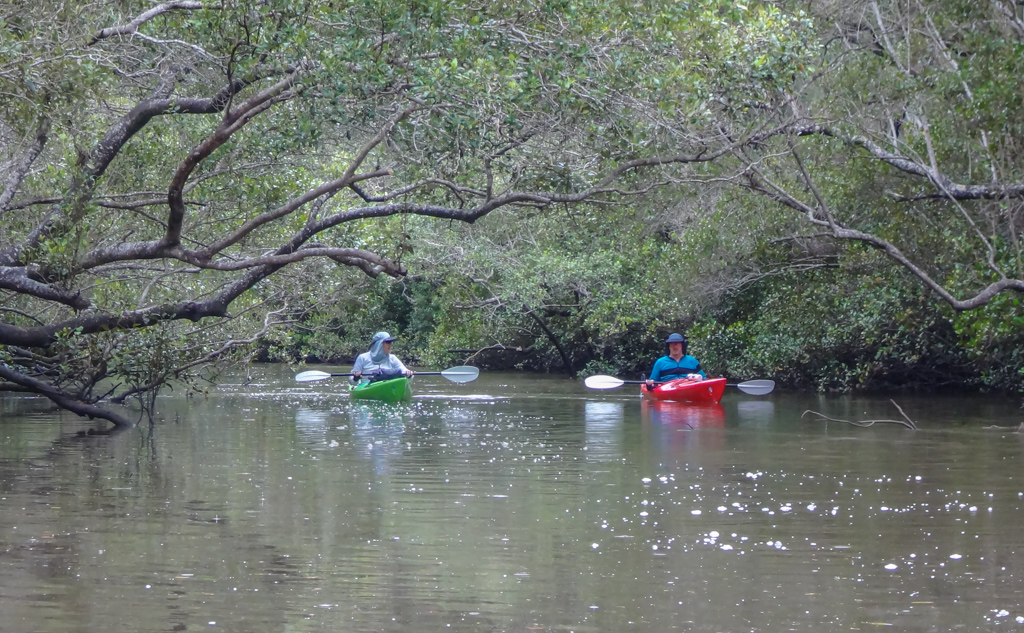 As we progressed upstream, the banks and trees drew closer together. 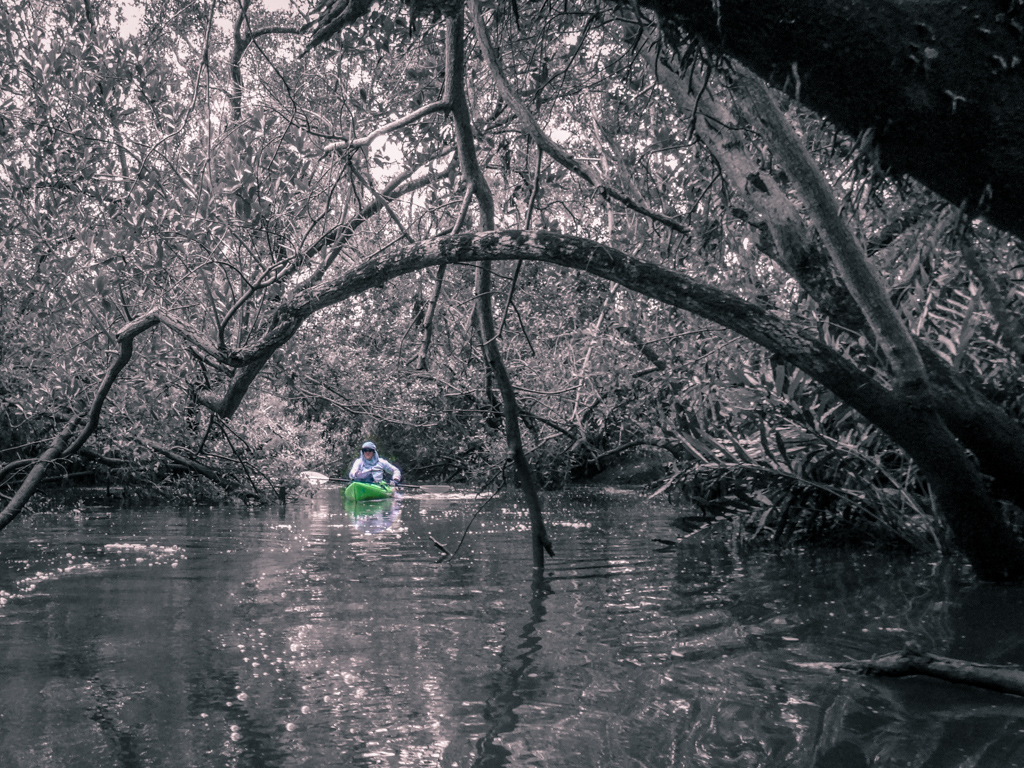 We floated through a tunnel of damp trees. 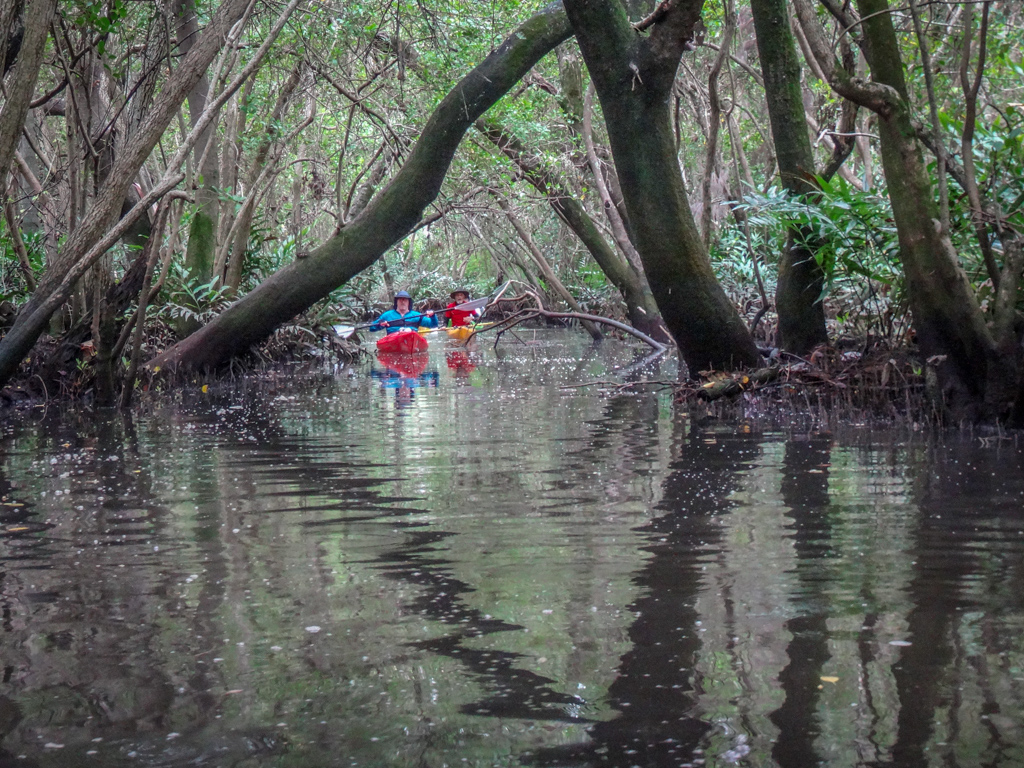 An interesting tributary branched off to our left.

Coolnwynpin Creek was even tighter than the main waterway.

Trees hung low over the water in this other-worldly place.

It was fascinating, although the mosquitoes were vicious.

When the creek became particularly narrow, we decided to turn around while there was still room. 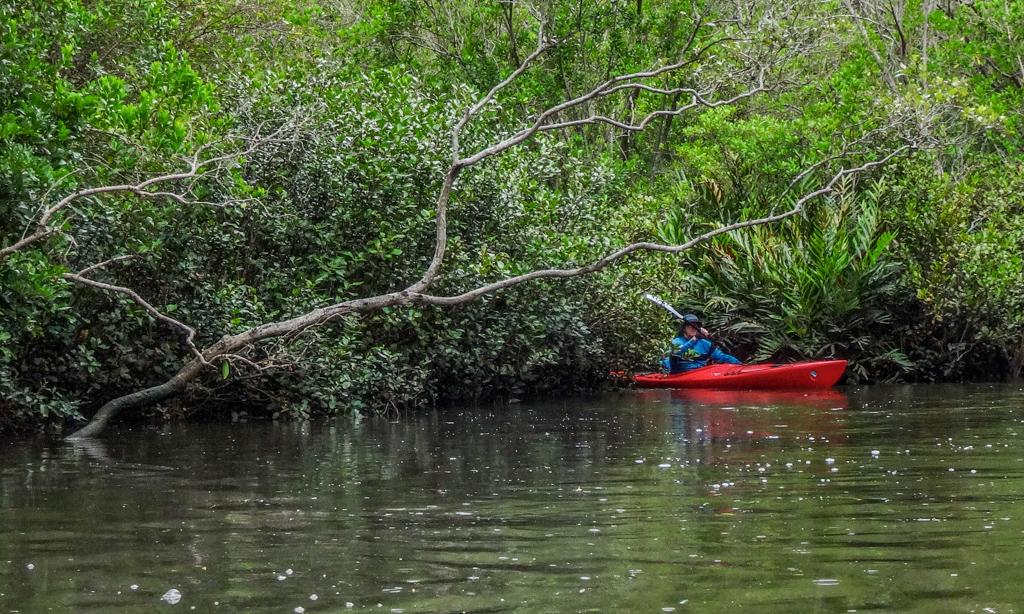 At one point we took a wrong turn and had to crash through some tight undergrowth to get back into the main creek. 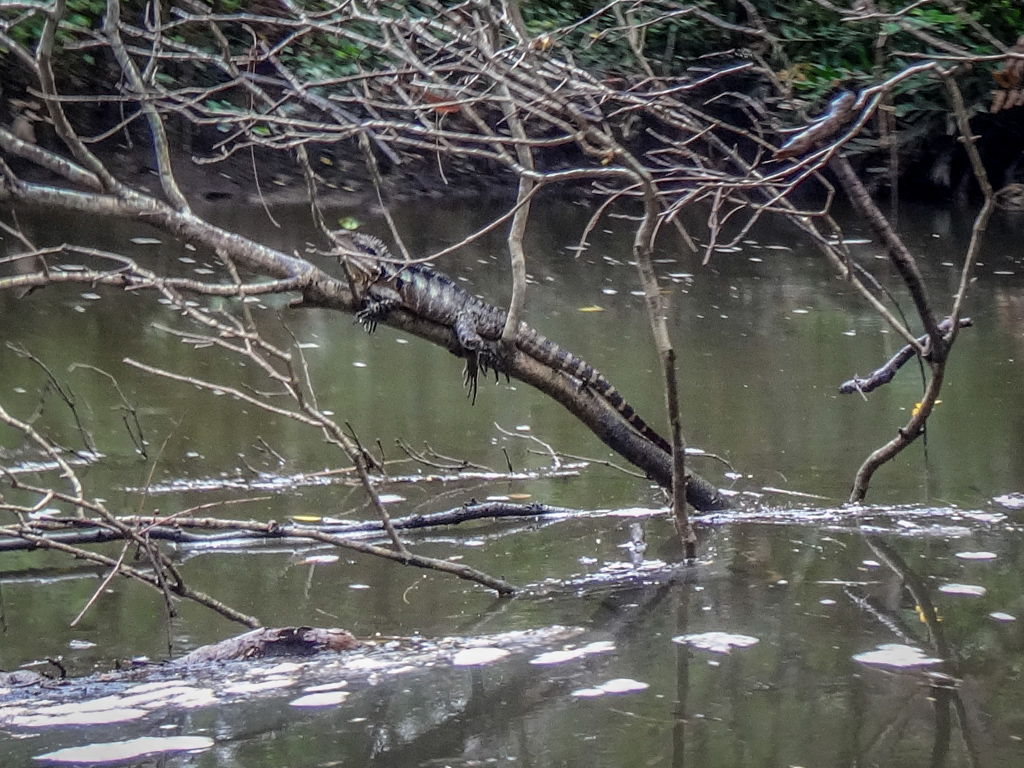 Perched on wet branch, another water dragon watched us and chuckled at our clumsy antics. 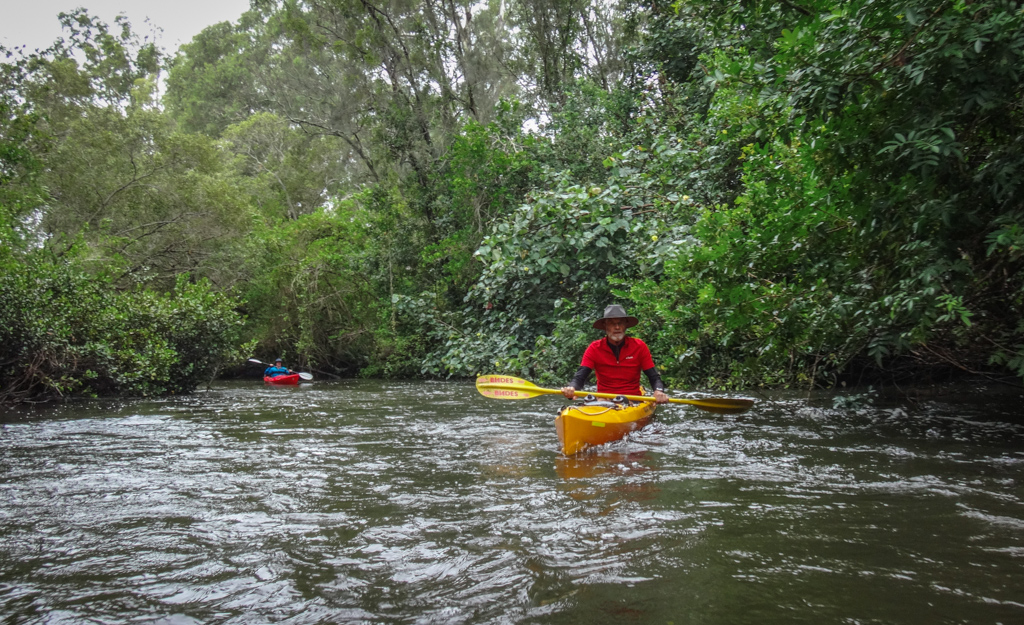 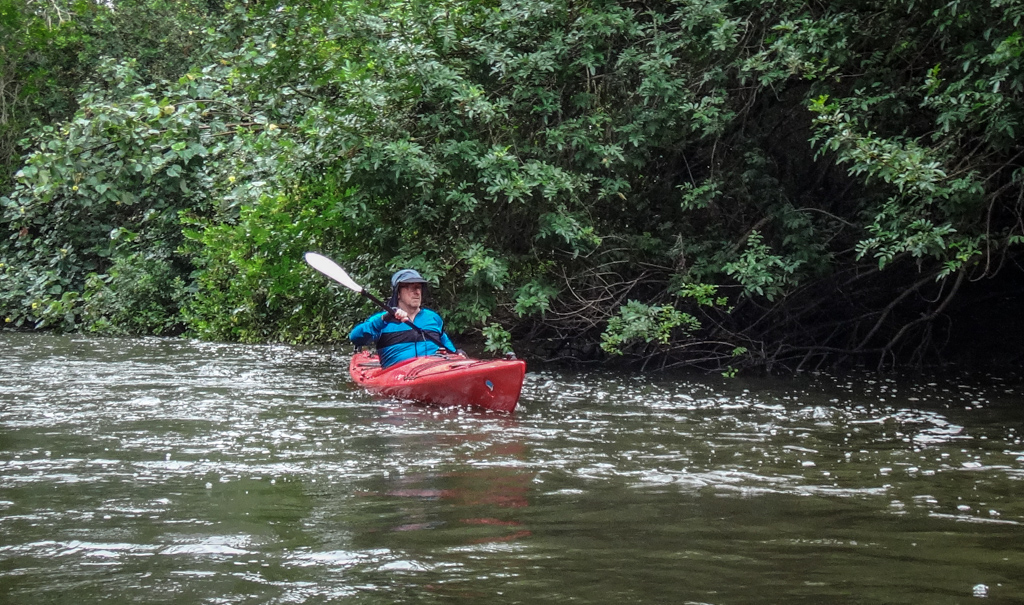 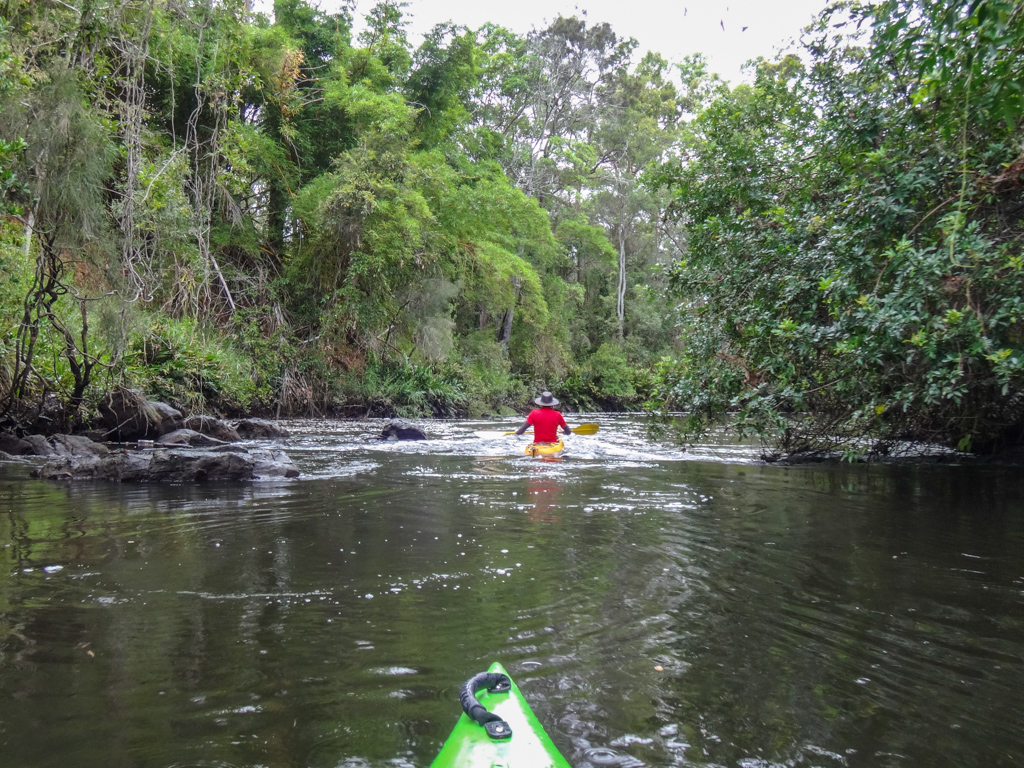 We were swept along as it bubbled over submerged rocks, and around tight bends.

This was a lot of fun. 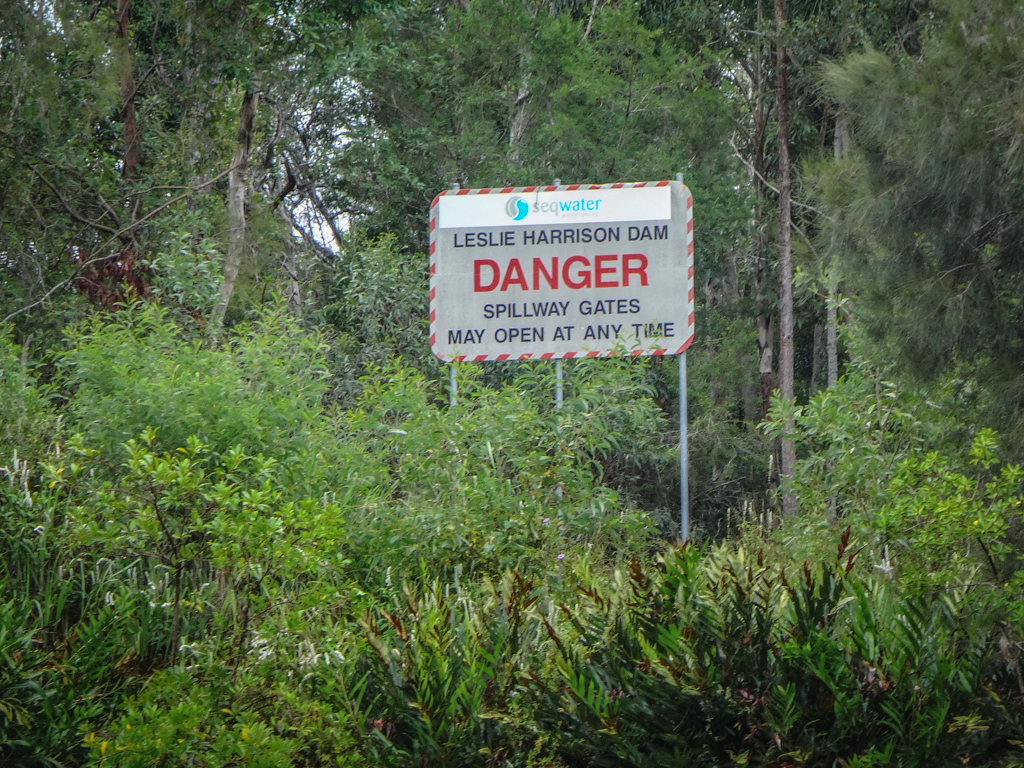 A warning sign signalled that we were nearing the end of our adventure. 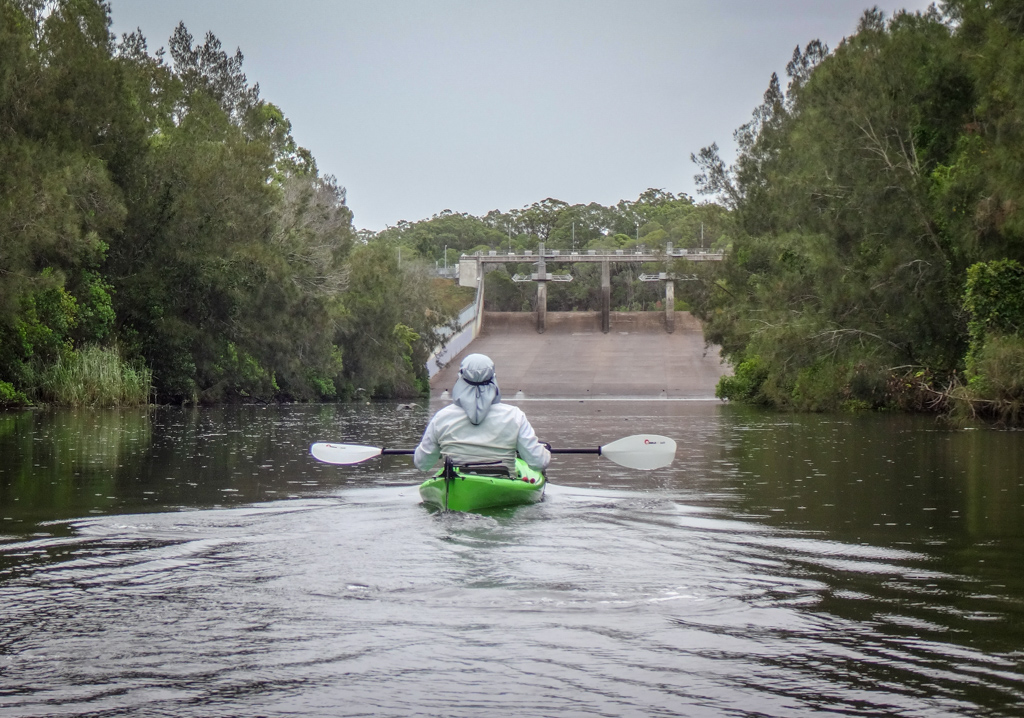 Around the corner we caught sight of the dam wall.

Adam mused out loud about what it would be like to ride a bike down the spillway.

As we approached it closer, we realized the wall was bigger than it first appeared.

We drifted a while in the pool at the bottom of the spillway, before making our way to the exit point.

Getting out was tricky.

The muddy bank and mossy rocks were slippery. My rubber sandals had no grip.

We worked as a team and gingerly carried each kayak up the bank to the grass. 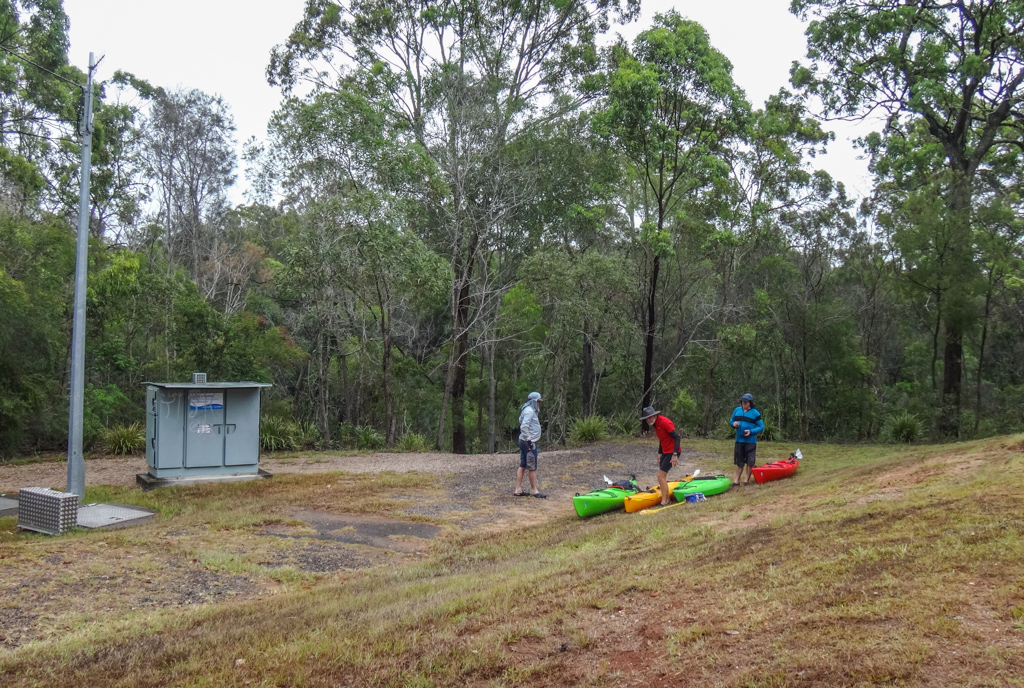 After we had recovered all the kayaks, Adam waited on the grass with them while I drove Darb and Calum back to the starting point to pick up the other vehicles.

Here’s Adam’s video of our adventure:

We paddled just under fourteen kilometres in about three hours.

This was an easy day out with low temperatures, gentle breezes, and a tide which pushed us upstream for the entire morning.

Thanks Darb, Adam and Calum for a fun morning on the water!