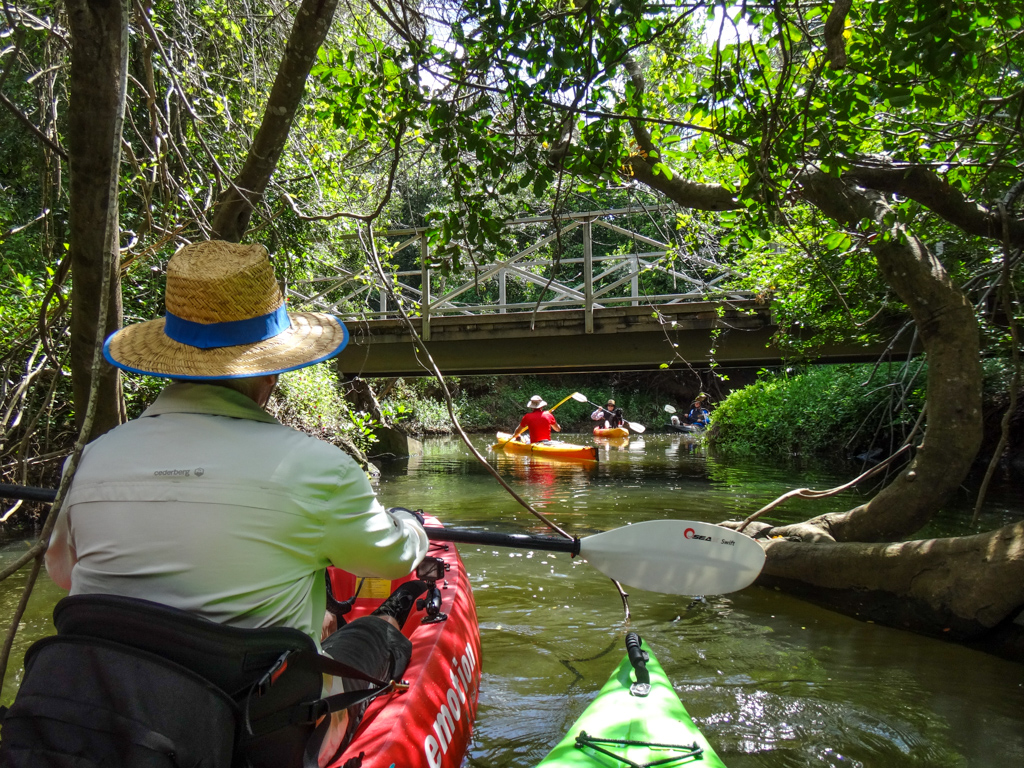 Today we paddled our kayaks up the North Pine River, exploring some of the creeks and gullies upstream. 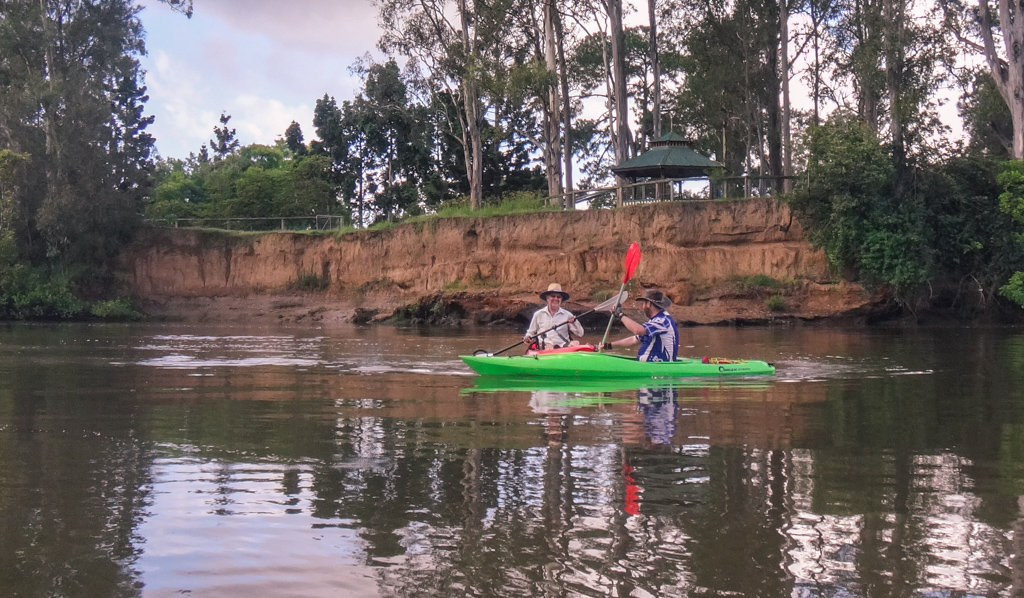 The River is tidal.  We left on a rising tide, using the current to take us upstream.  We planned to use the turning tide, ninety minutes later, to take us back to our starting point. 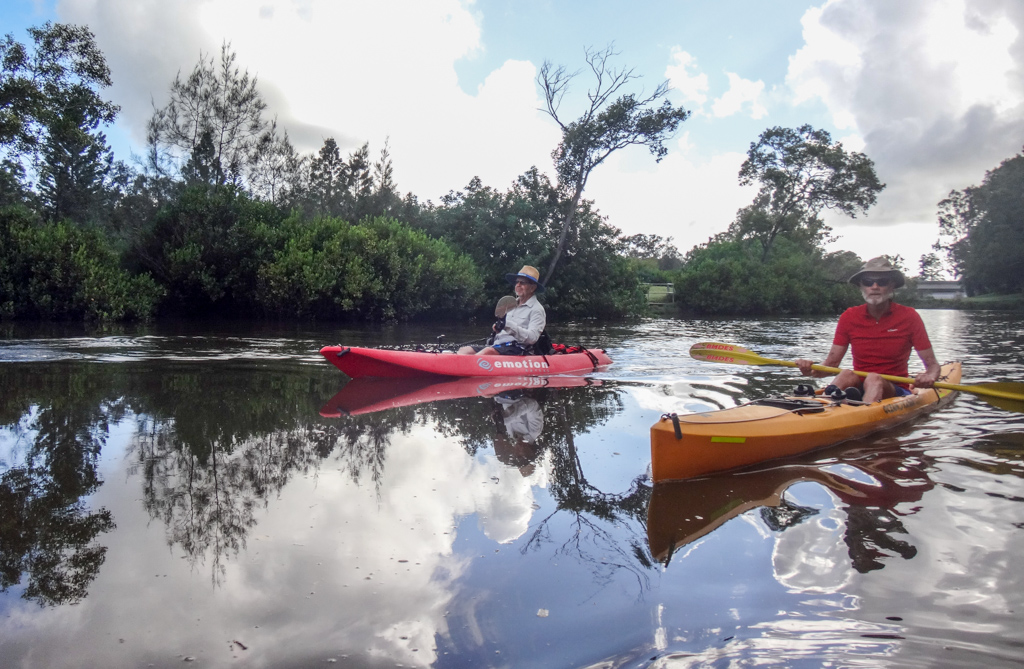 There is not usually much of a breeze in the early morning.  The water was mirror-smooth as we began our leisurely upstream paddle.

Other people were out too.  Joggers in the adjoining parks, other paddlers … 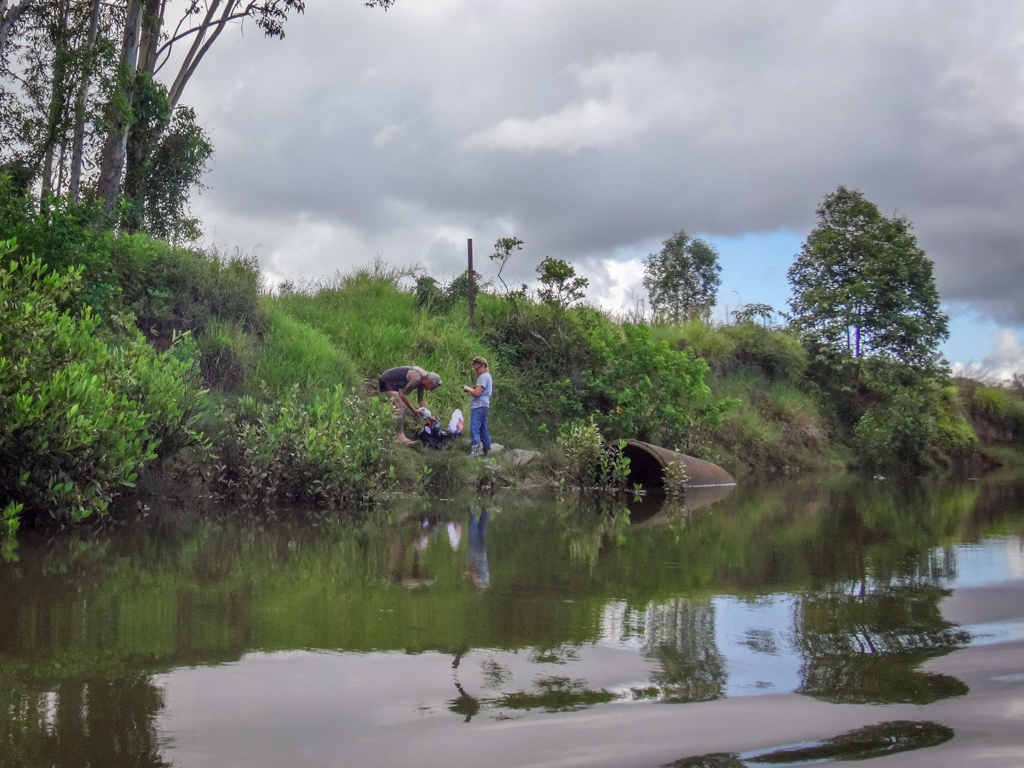 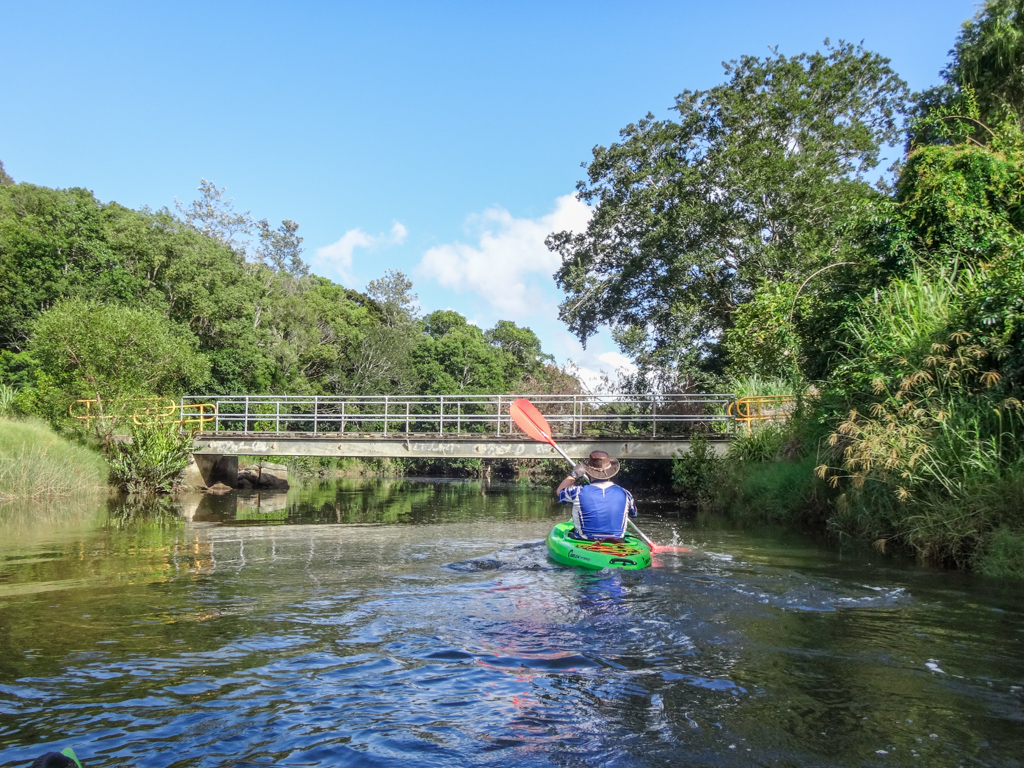 After about half an hour we reached the foot bridge near One Mile Creek.

Normally I ride my bike through the creek here, but the rising tide had made everything nice and deep – perfect for paddling. 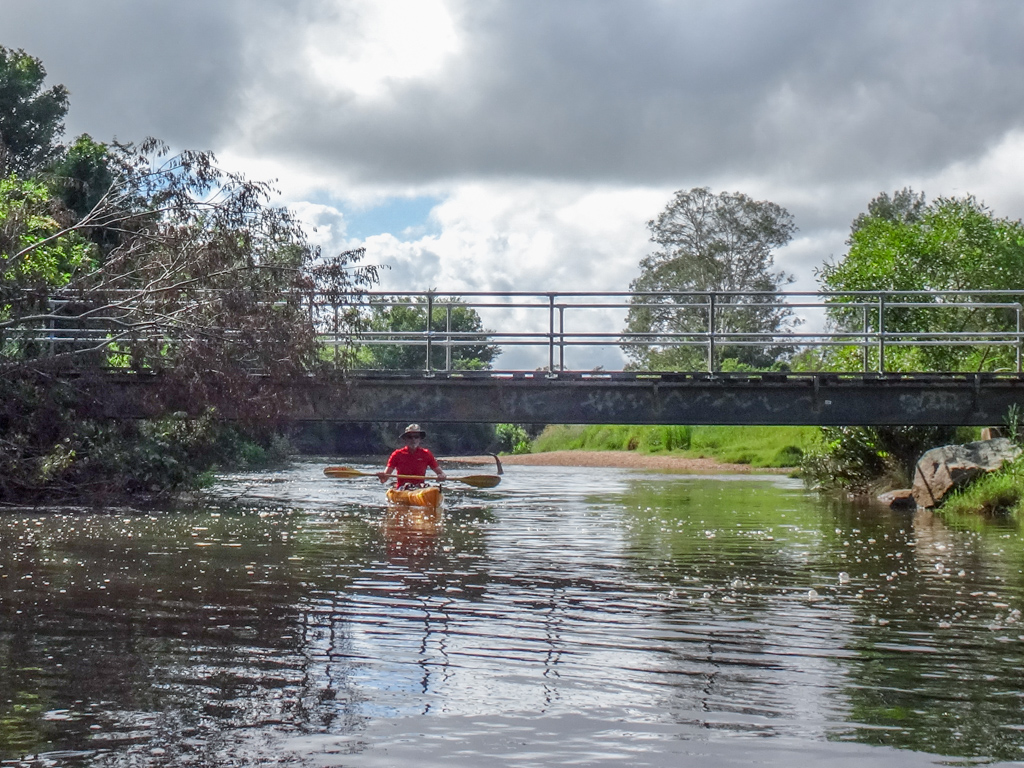 Thankfully the water was still low enough to let us pass under the bridge.

I wondered how high it would be on the way back.

Water bubbled over shallow rocks in one section.

Calum zipped through on his sleek craft.

The rest of us got stuck on the rocks and had to clumsily lift our boats over them. 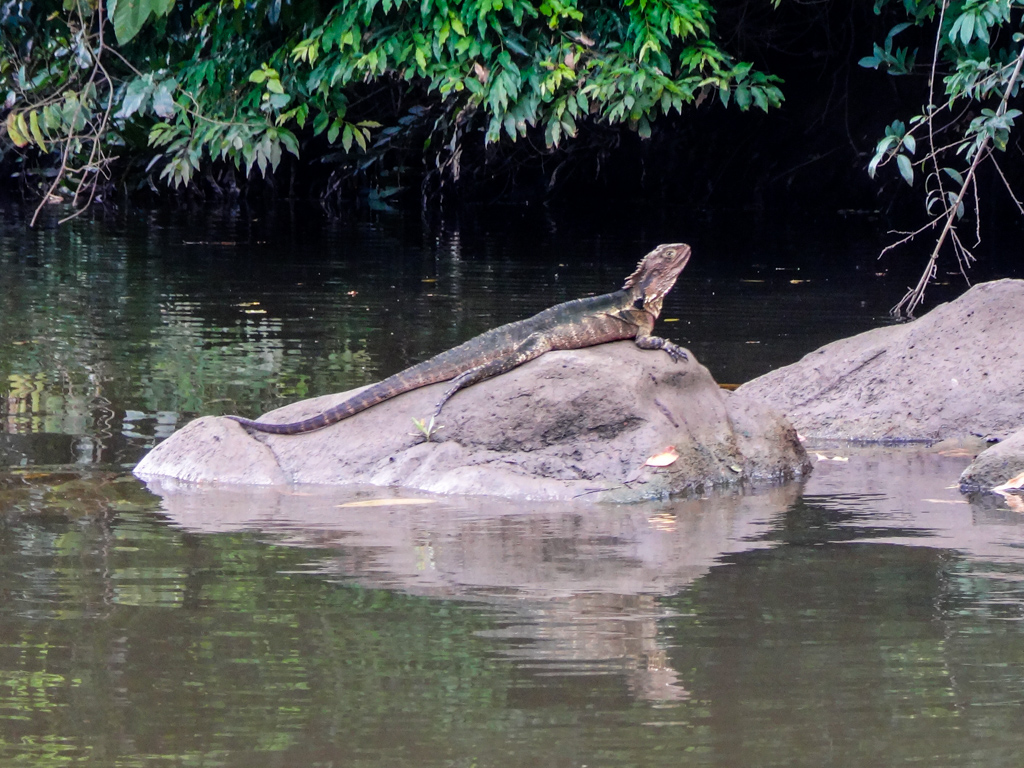 A water dragon watched us in amusement, a wry grin on his face. 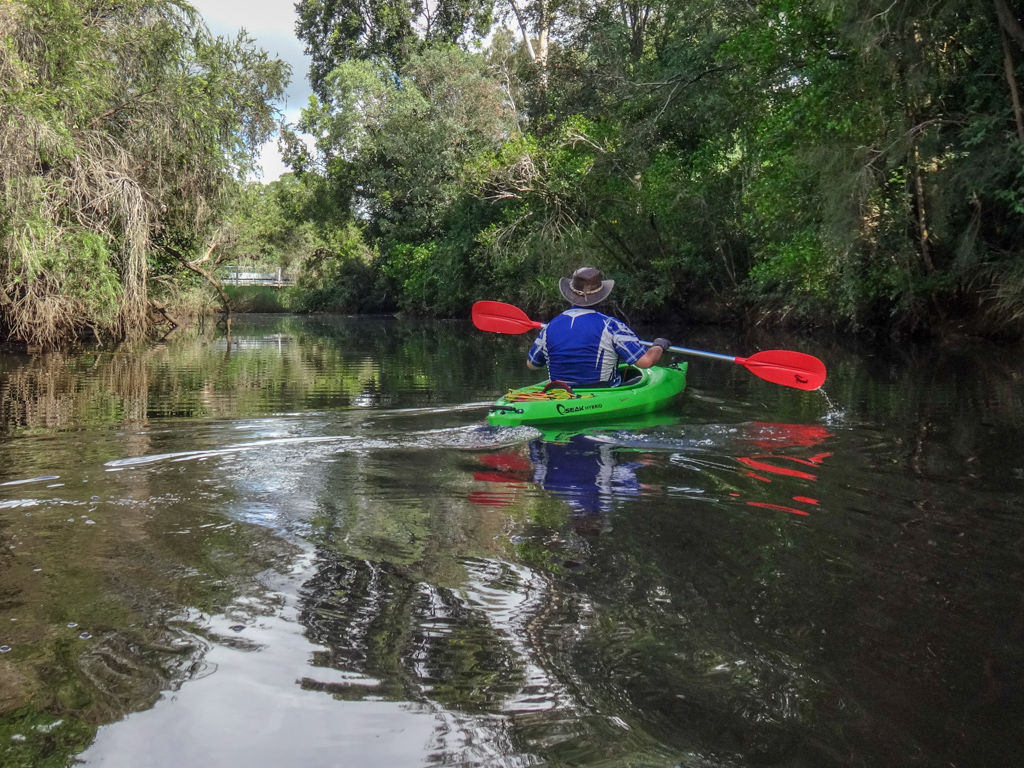 It’s normally quite shallow. Would there be enough water for us to paddle under the bridge?

I think in the paddling world this is called “portage”. 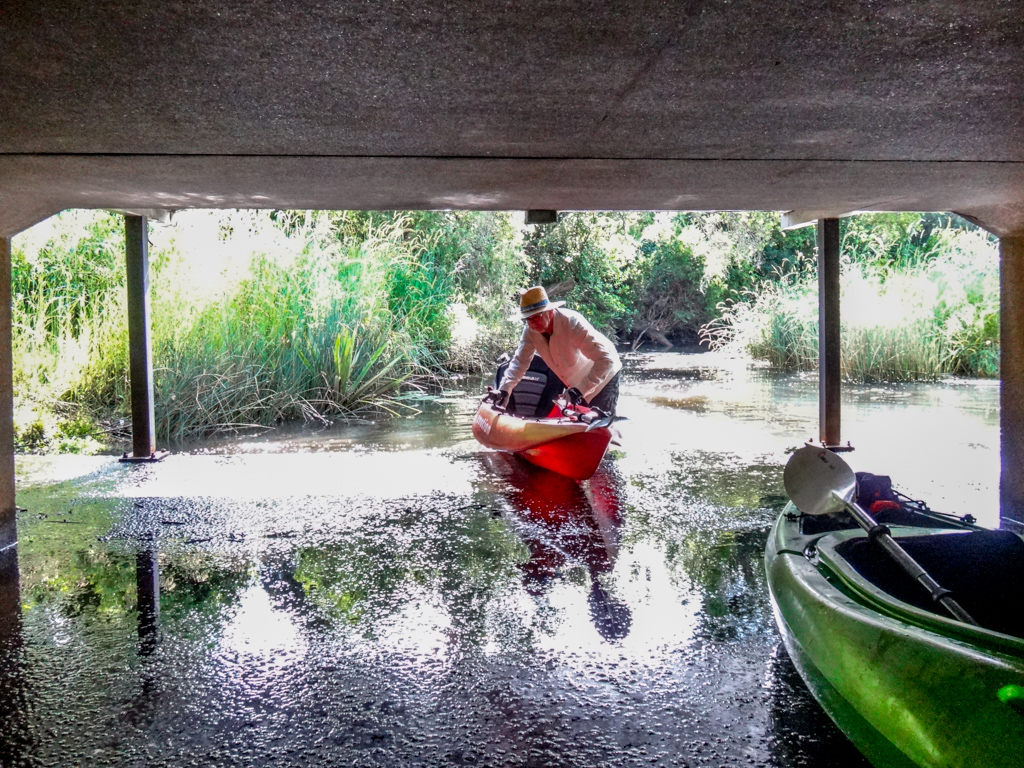 We dragged the kayaks under the bridge on the slimy concrete. 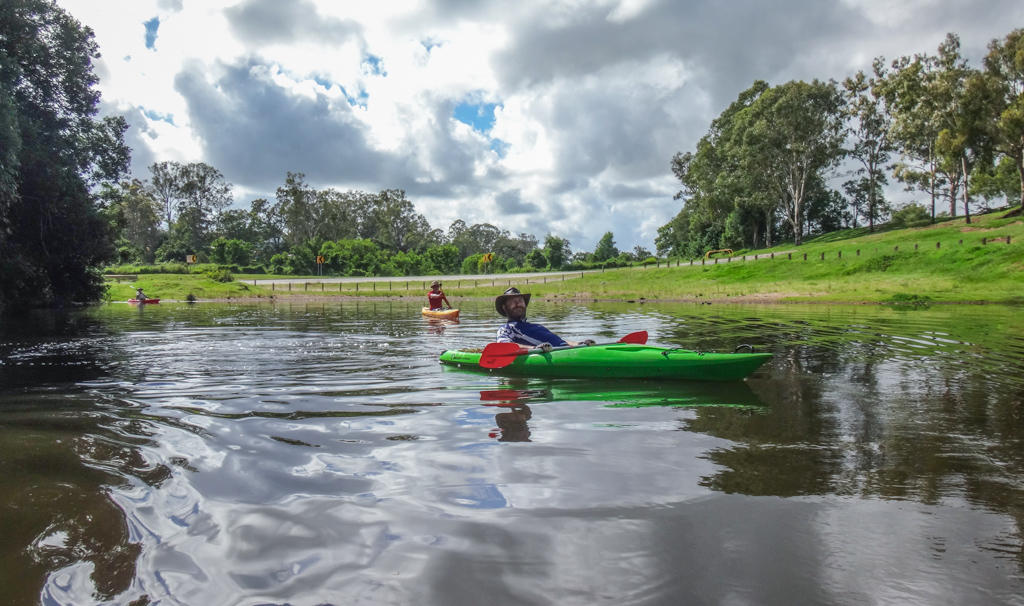 On the other side  of the bridge the river opened up into a large tranquil lagoon. 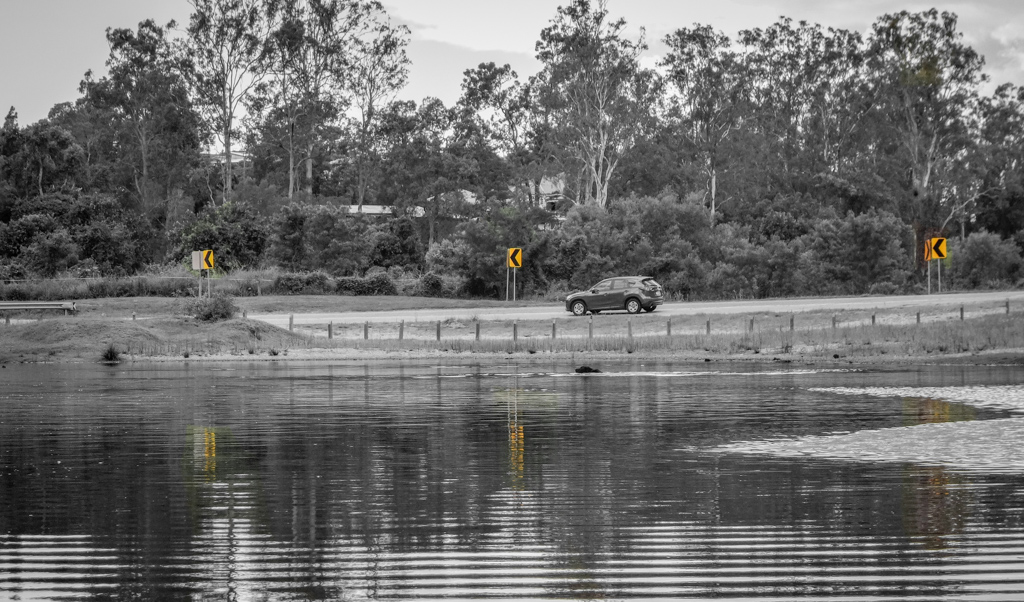 Cars bustled by on the adjacent road.

I’ve often driven and cycled past this spot, watching happy people splashing in the water.

Today we had it to ourselves. 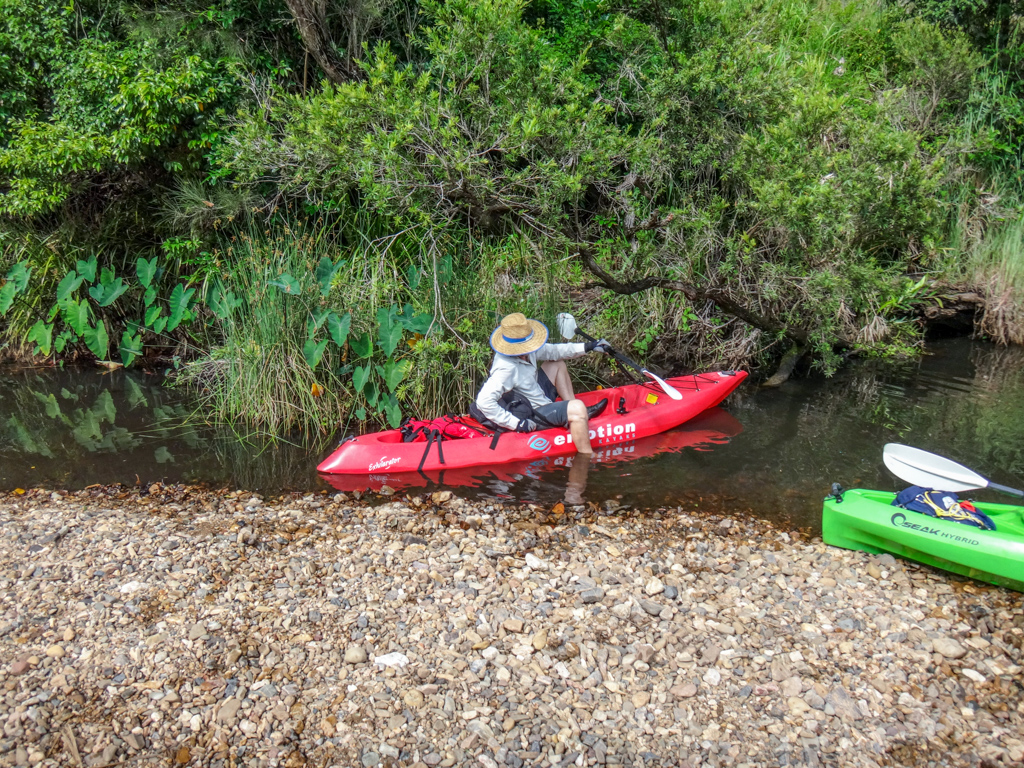 The river narrowed to a trickle.

How much further could we go? 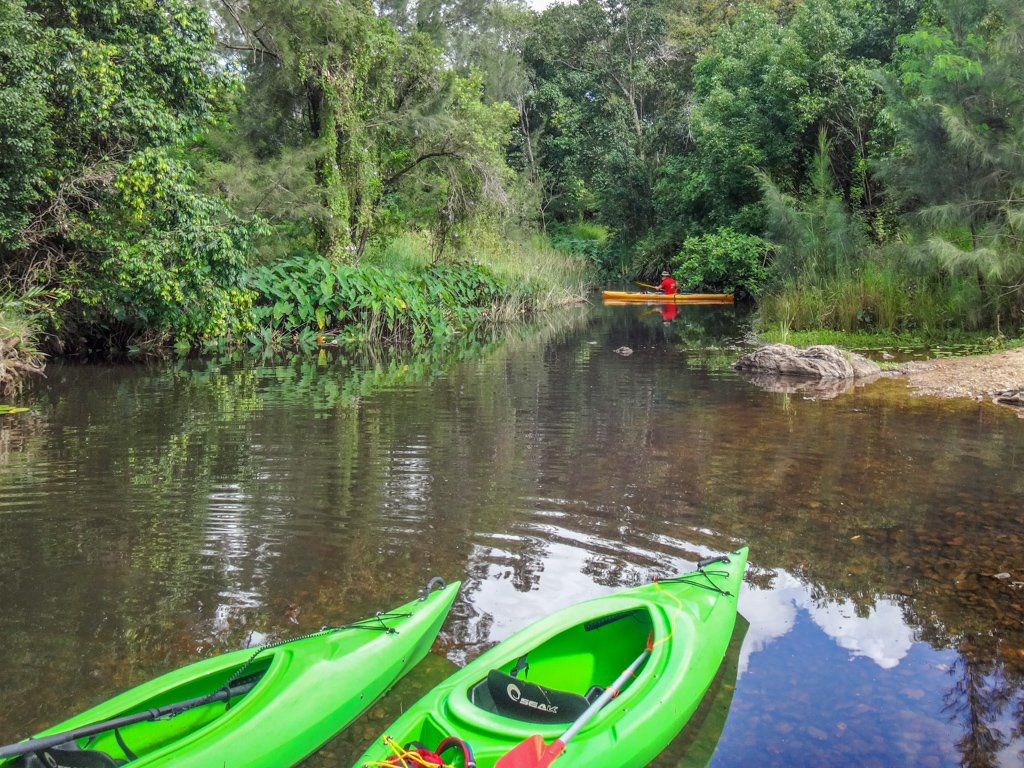 At this point we could have dragged the boats a short distance to another lagoon, and paddled further upstream…

Instead we decided to head downstream, and explore some of the adjoining creeks along the way. 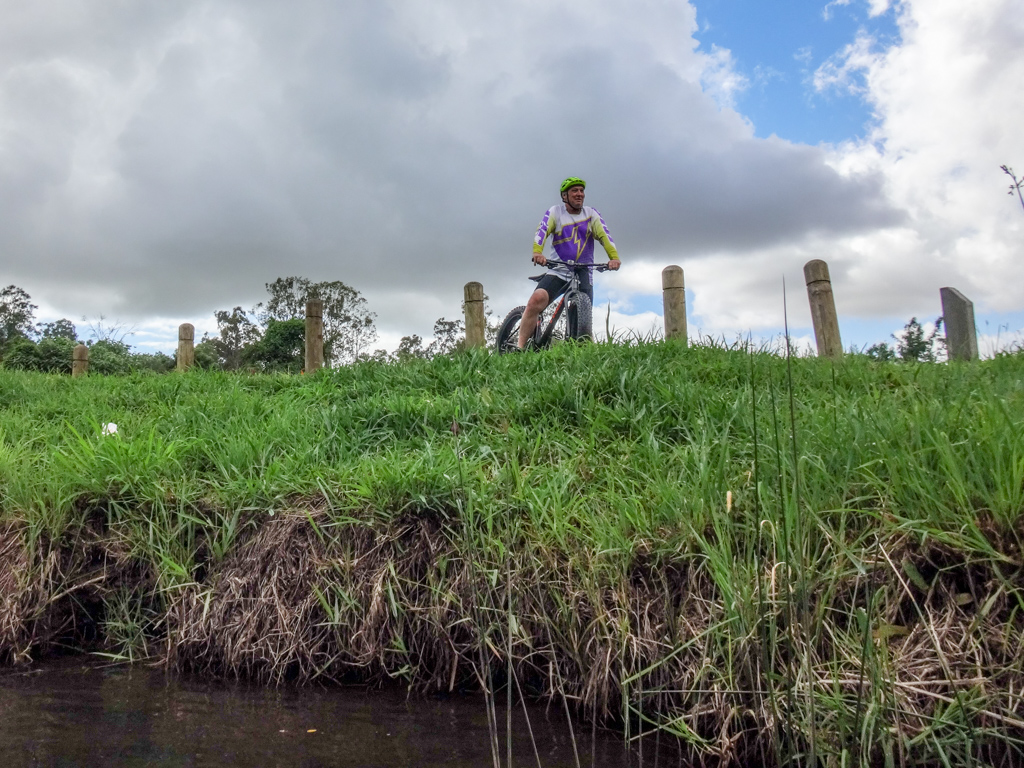 Simon showed up on his fat bike to say “hello”.

He opted for a sleep-in this morning and said he’d try to catch up with us while we paddled.

Our first detour was up Sideling Creek – a small watercourse that joins the North Pine River at Youngs Crossing.

This Creek is dammed about a kilometre upstream from here, forming Lake Kurwongbah.

In times of flood it has a fearsome flow, but today it was tranquil.

A couple of hundred metres upstream the creek narrowed.

Paul, Russel and I spun our kayaks around when we’d gone far enough.  Calum’s longer craft took a bit longer to manoeuvre. 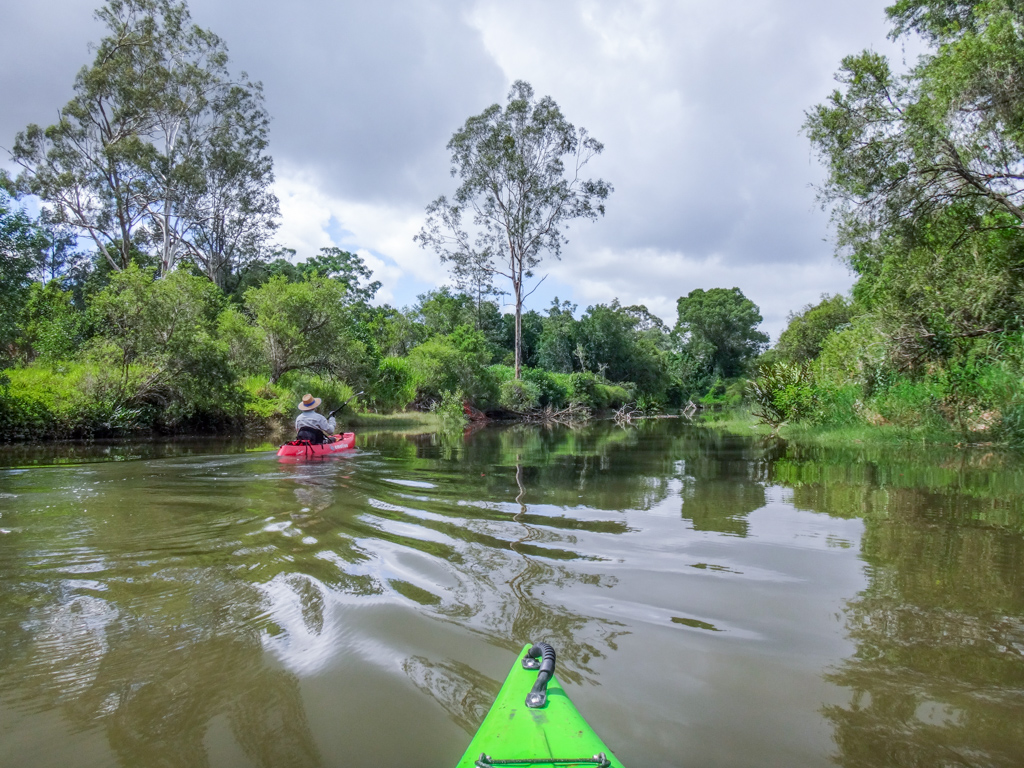 Back downstream past “The Rapids”, the river was no longer too shallow.  We didn’t get stuck on any rocks.

The space under the footbridge was tighter.

Paul showed us how to get under it. 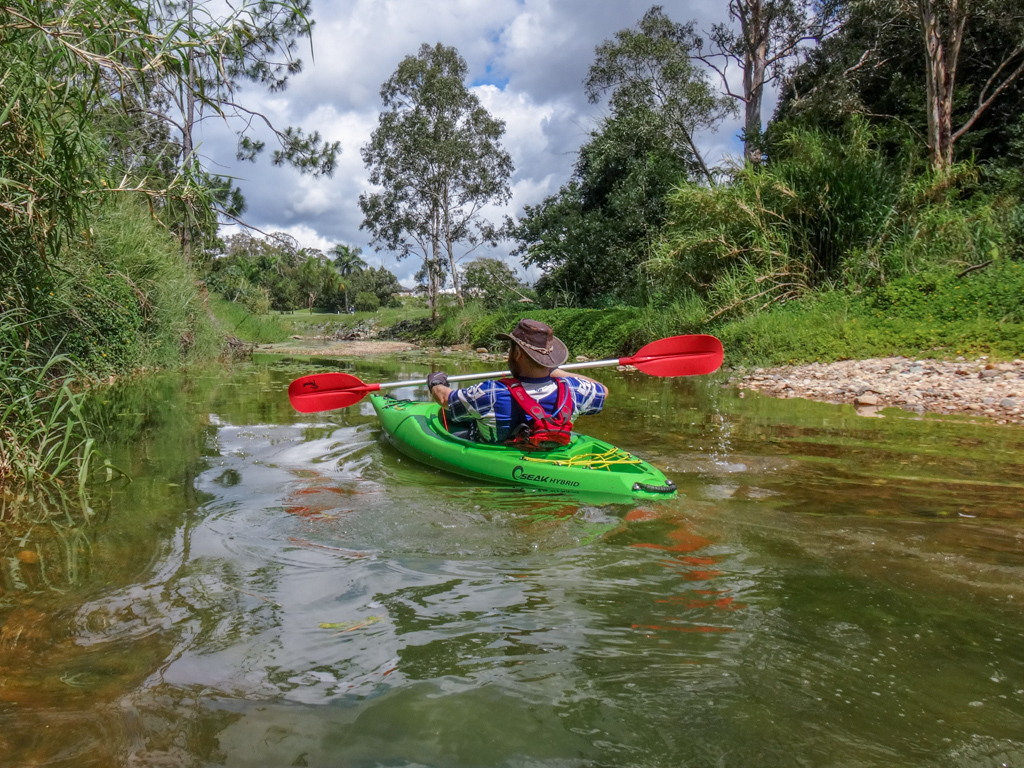 One Mile Creek was now unusually deep.  We were able to paddle upstream a short way towards the Golf Course.

In case you’re wondering, the name “One Mile Creek” has nothing to do with its length.  You’ll often come across X mile creeks all over the place – Four Mile Creek at Strathpine, Six Mile Creek at Caboolture, etc.

The name indicates the distance along the road from the next major river crossing.

Ironically, Gordon’s Crossing has since disappeared under Lake Samsonvale, but the creeks retain the name as a reminder to an old dirt track that used to pass this way and over a treacherous river crossing. 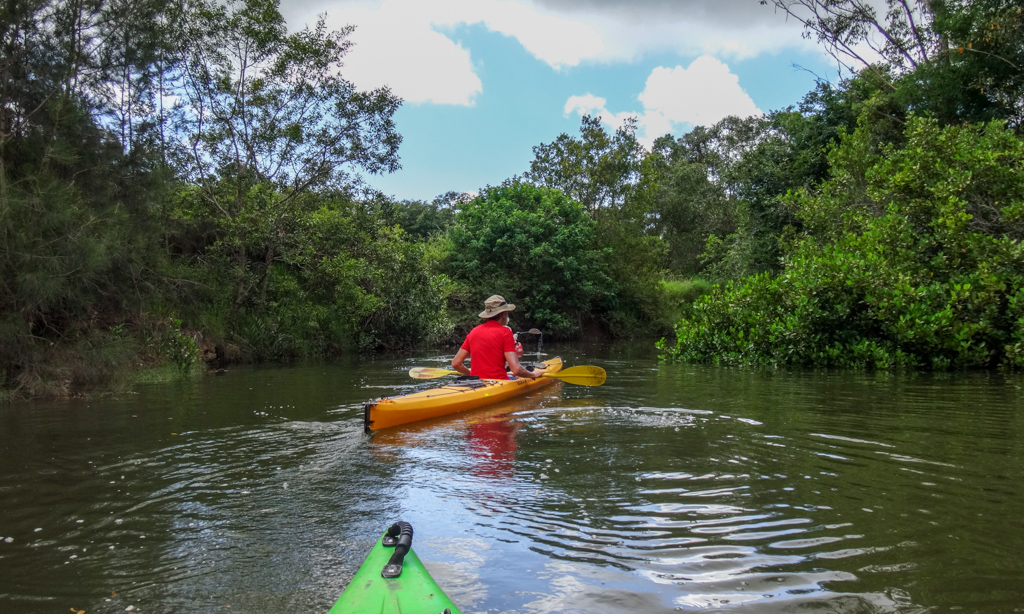 A little further downstream we encountered the entrance to Todds Gully. 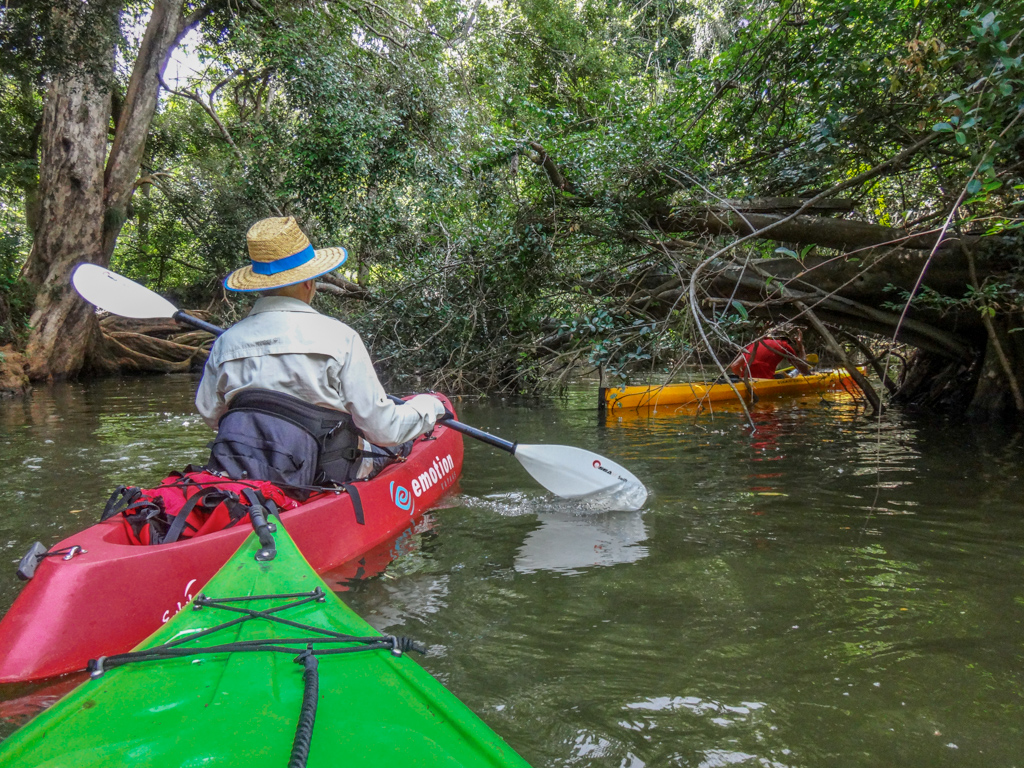 We pushed upstream, past mangroves and through thick undergrowth.

Sometime (but not often) my shorter slower boat has an advantage over its sleeker, faster cousin. 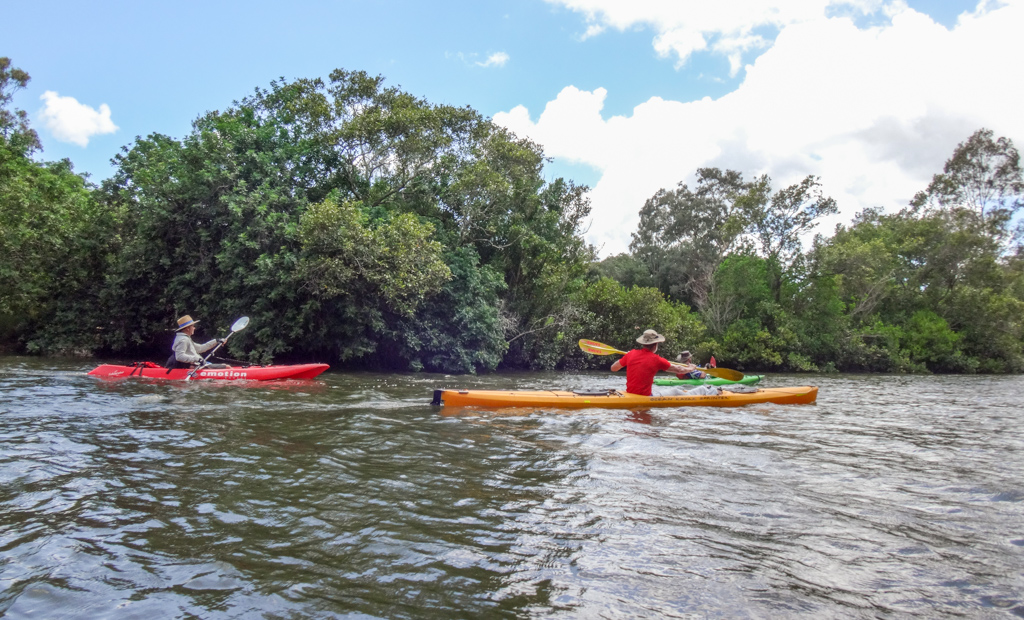 The wind had picked up, and the water was slowly flowing out to sea in the direction we were heading.

Despite the assistance from the current, it was still hard work to paddle against the breeze. 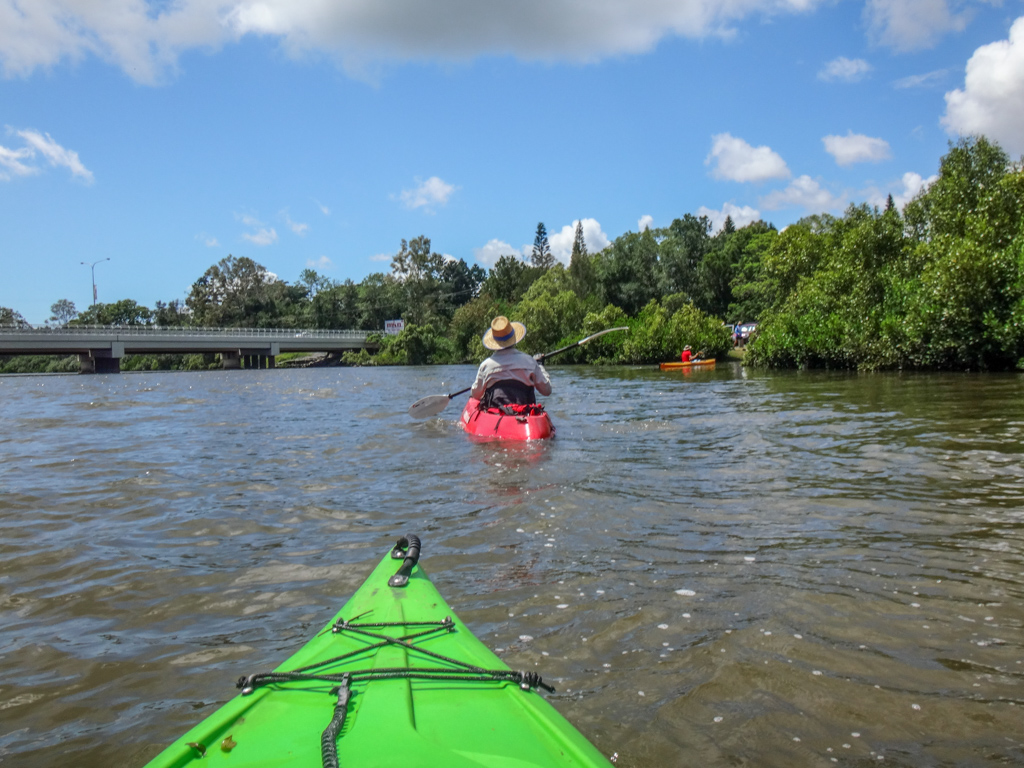 Everyone nodded in agreement.

Here’s Russel’s video of our paddle.

We paddled almost eleven kilometres in three and a half hours.  During that time I burned less than one thousand kcal.

Thanks Calum, Russel and Paul for an enjoyable morning on the water. 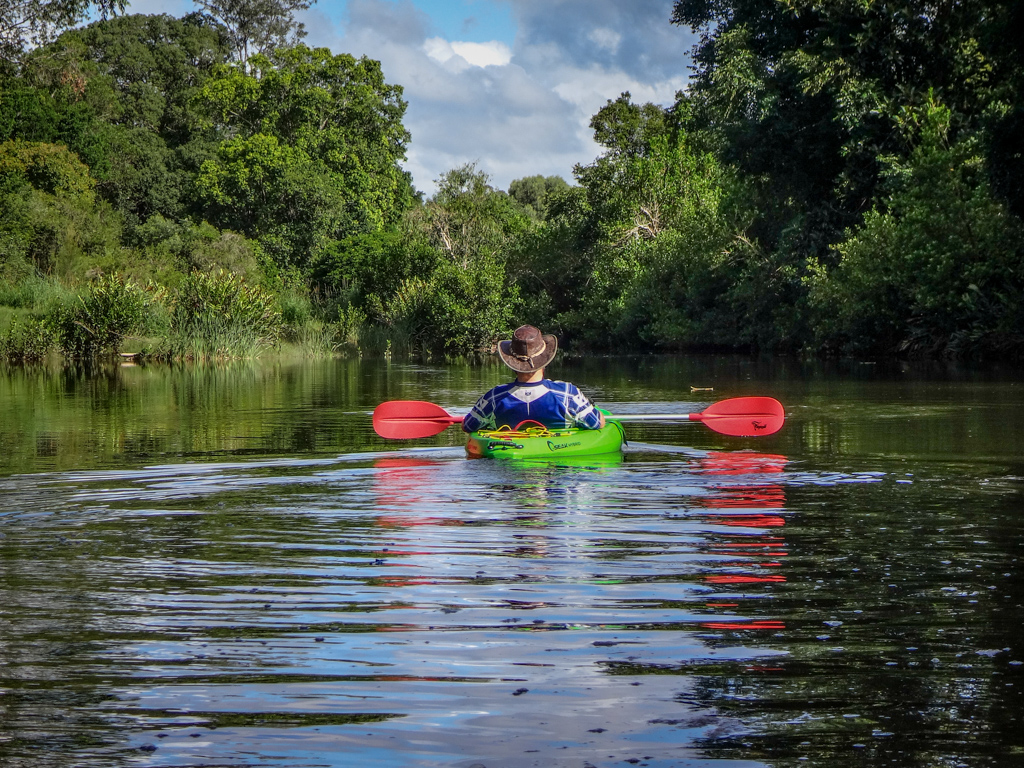