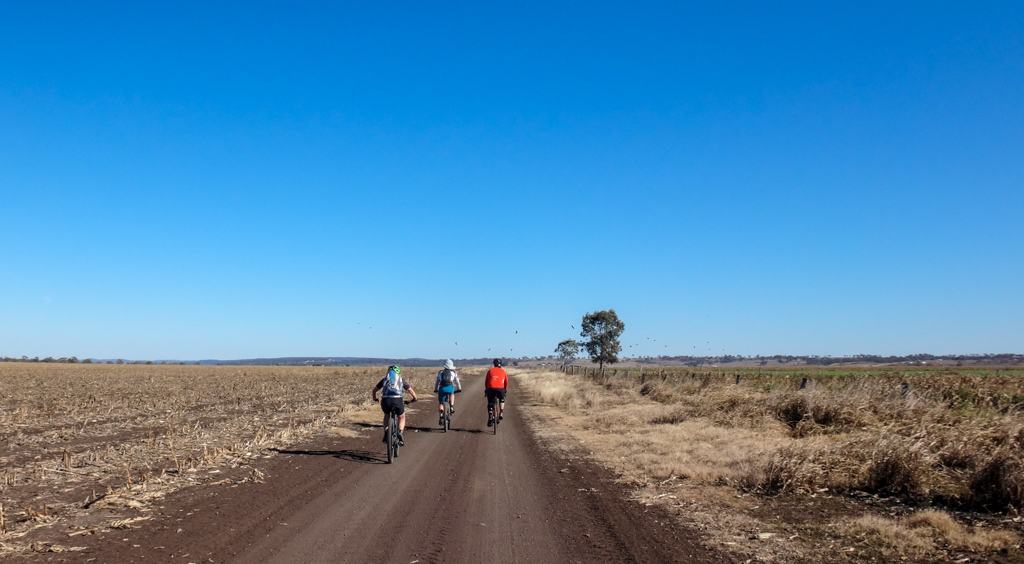 The land west of the Great Divide is vast and flat with a sky so high it feels like you’re going to fall into it. Today’s adventure took us on a large leisurely loop through some of this country. 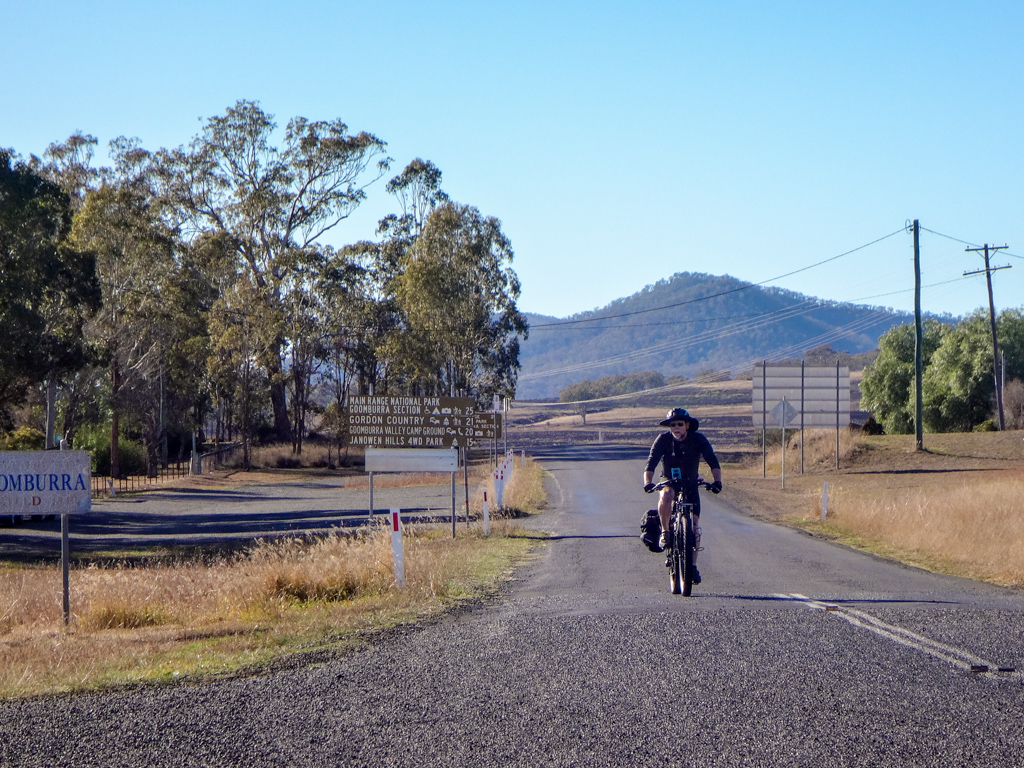 We drove a couple of hours west of Brisbane, through Cunningham’s Gap, and parked our cars at the small village of Goomburra. 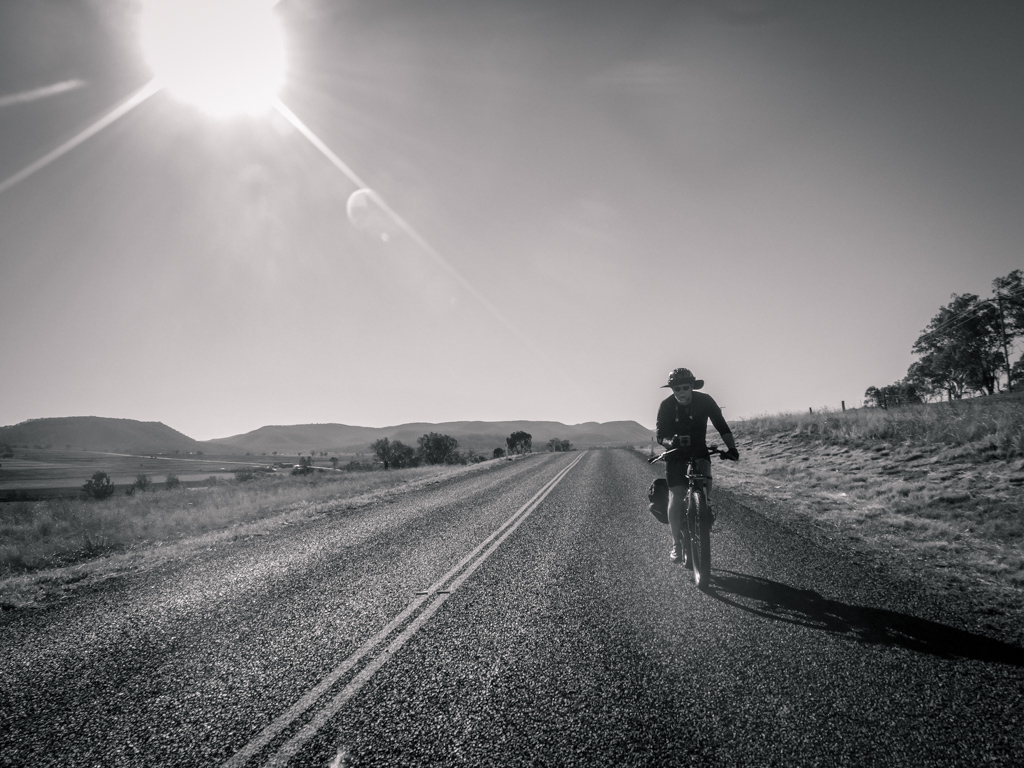 “What made you pick this place for a ride?” Jason asked me.

“There was a hole in my map,” I replied cryptically.

A few years ago we had ridden a few loops through the state forests around Leyburn and Pratten.  I had marked these courses on my map, but they didn’t connect up to any of the other places we had ridden.  So I thought it would be fun to finally fill in that gap.

We rolled along the paved road for a few minutes then turned into “Ghost Gate Road”. 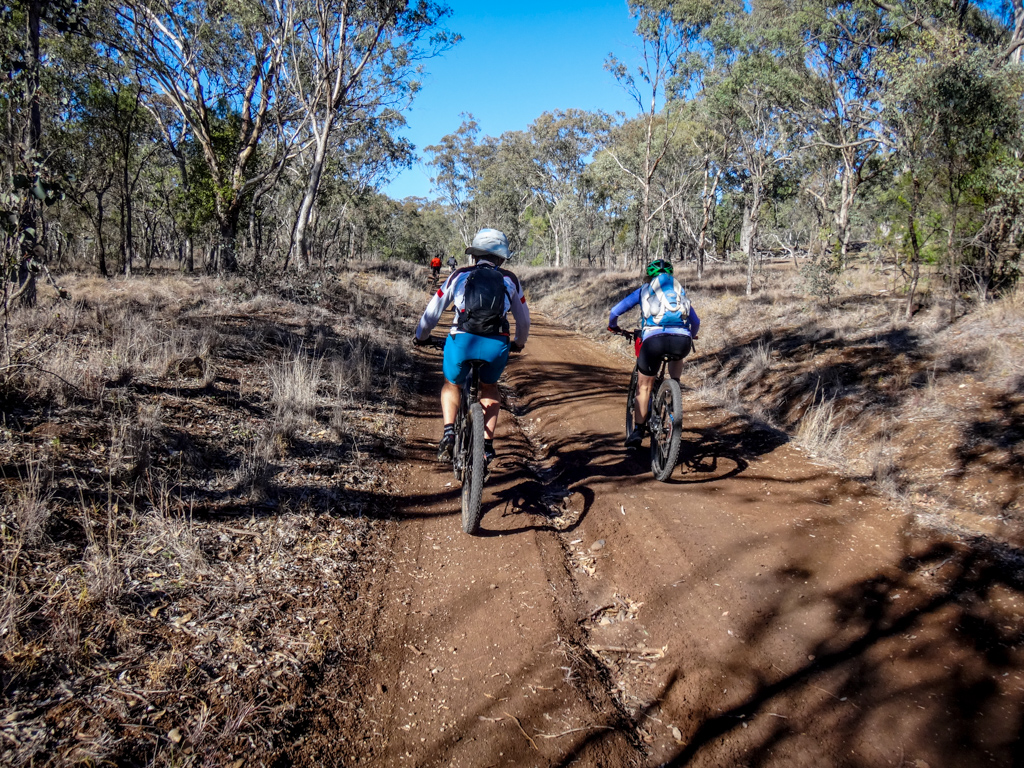 The dark soft soil was pleasant to ride on, but I imagined would be horrible after rain.

As we pedaled up the gentle incline, I wondered why it was named “Ghost Gate Road”. 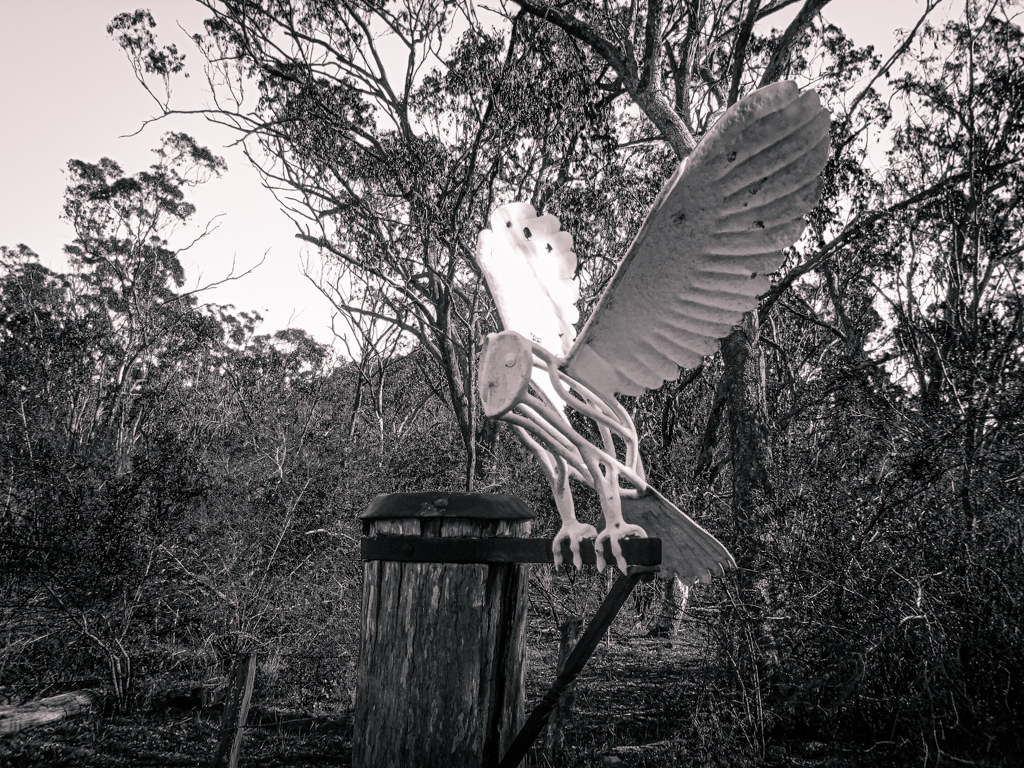 At the top of the hill I was found the answer to that question.

At the foot of a fascinating sculpture of a Great White Owl by David Blomfield, lay a plaque which read:

This site marks the position of a stout wooden gate, which stood in the boundary fence across a track between 19th century Glengallan and Goomburra Stations.  The gate naturally hung closed and as a consequence of this was not latched if no stock were in sight and the rider intended to return within a reasonable time.

The track was used by travelers during the day and stockmen seeking a friendly game of cards or social entertainment at night. Late one evening, when a stockman was returning home, the gate mysteriously swing open as he approached, causing his horse to shy.  He was terrified and fled back to his associates with tales of ghosts.

It was later found that a large white owl occasionally sat on the gate and as a horseman approached it would take flight, pushing the gate and causing it to open. The gate would then close under its own weight.  The ghostly reputation so gained by the gate was a product of moonless nights, strong liquor and superstition.

Oddly enough, although the area was not originally haunted, it is now – not by a ghost, but by the fear of the original horse and rider that imprinted itself on the surroundings, like music on a gramophone record.  The apparition of a horseman is still seen from time to time. 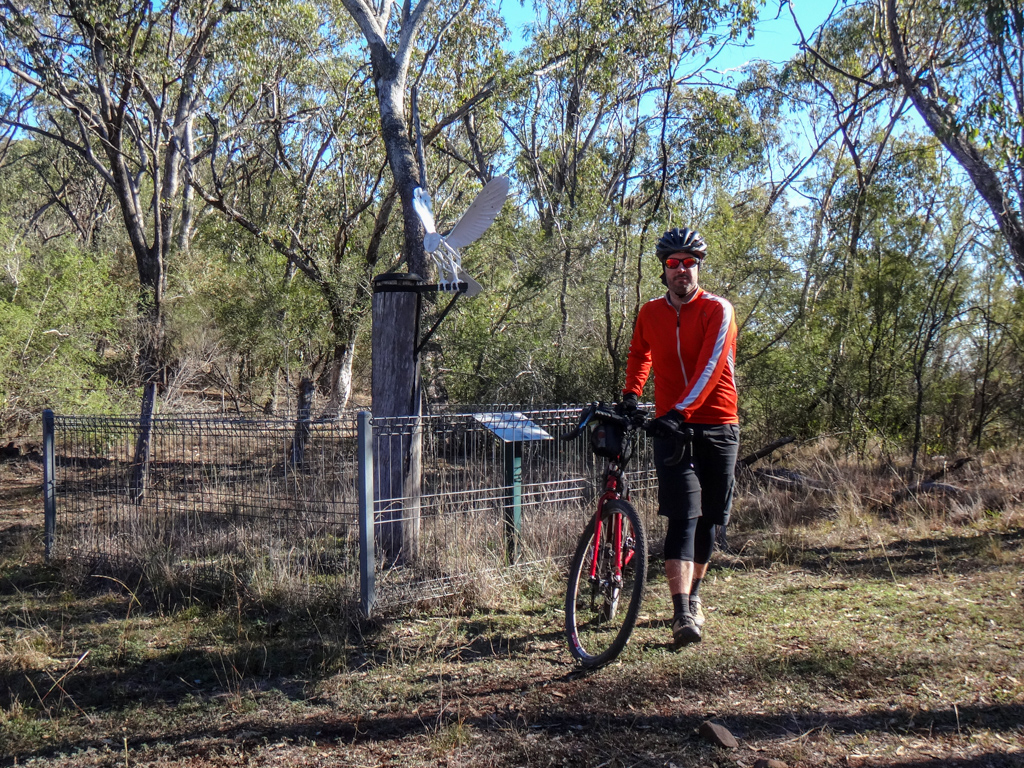 It was too bright for any ghostly riders to make themselves known.  The only apparitions visible today were of five curious cyclists. 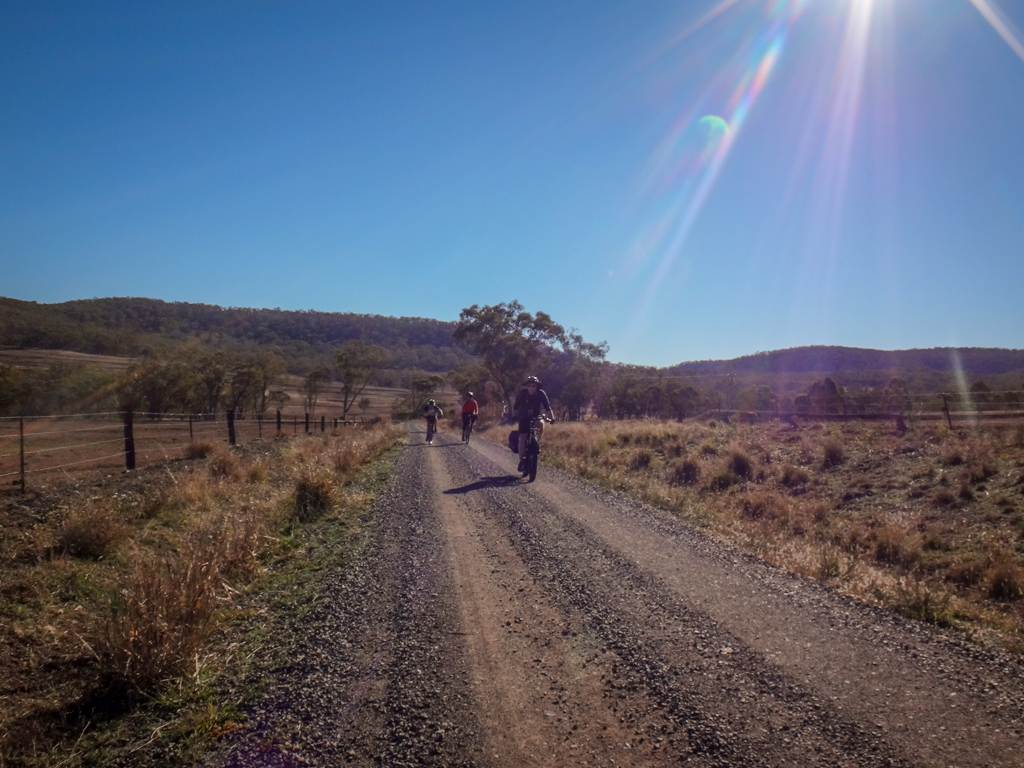 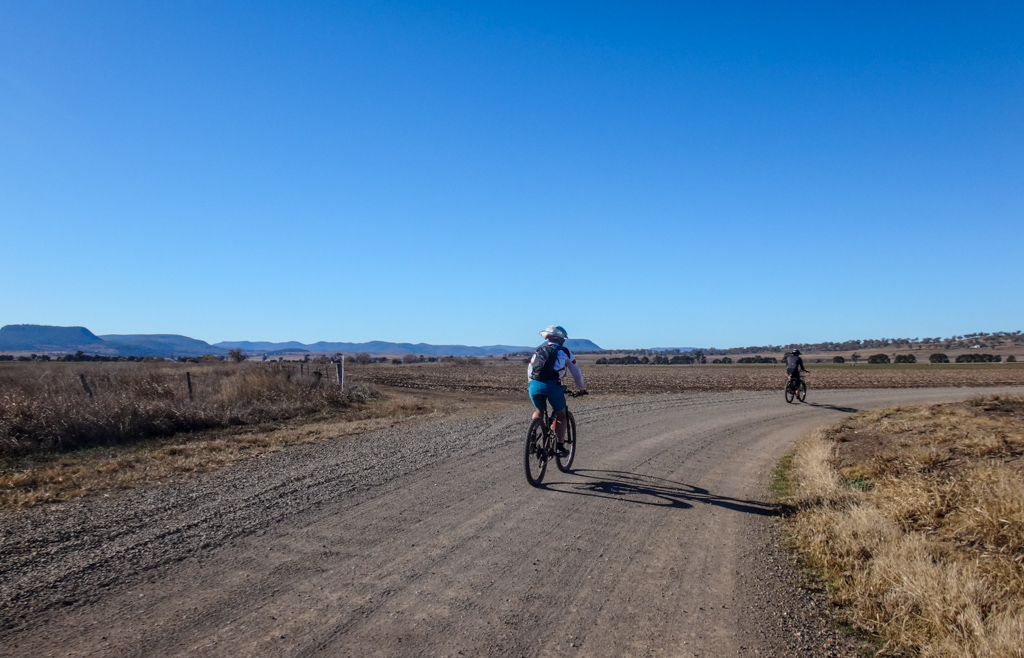 We rolled down the other side of the hill, back onto the endless flat plains of the Southern Downs. 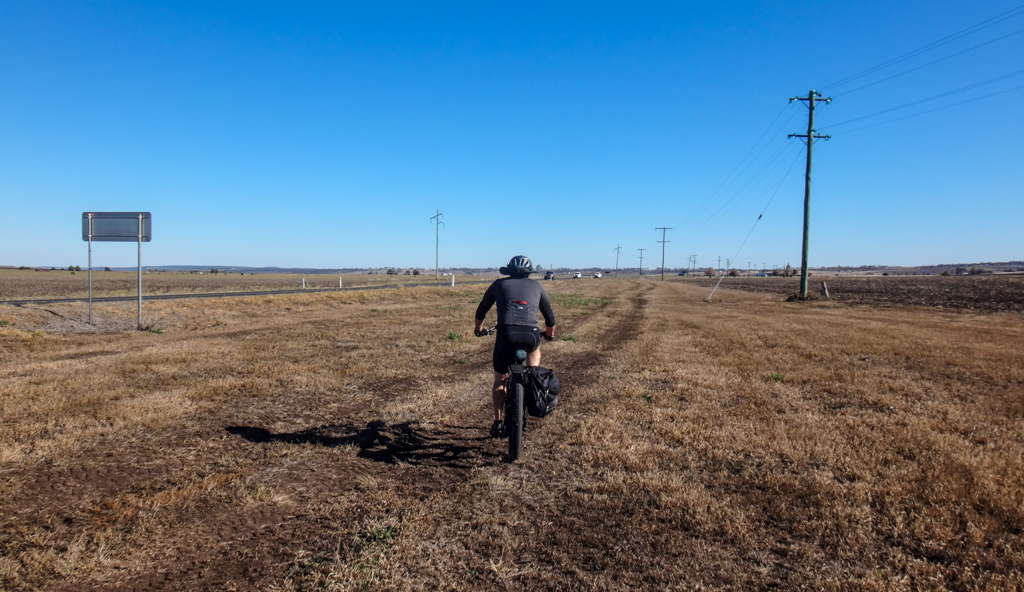 Our course followed the New England Highway for about a kilometre.

Thankfully, we didn’t have to ride on the road – following a farm track on the grass instead. 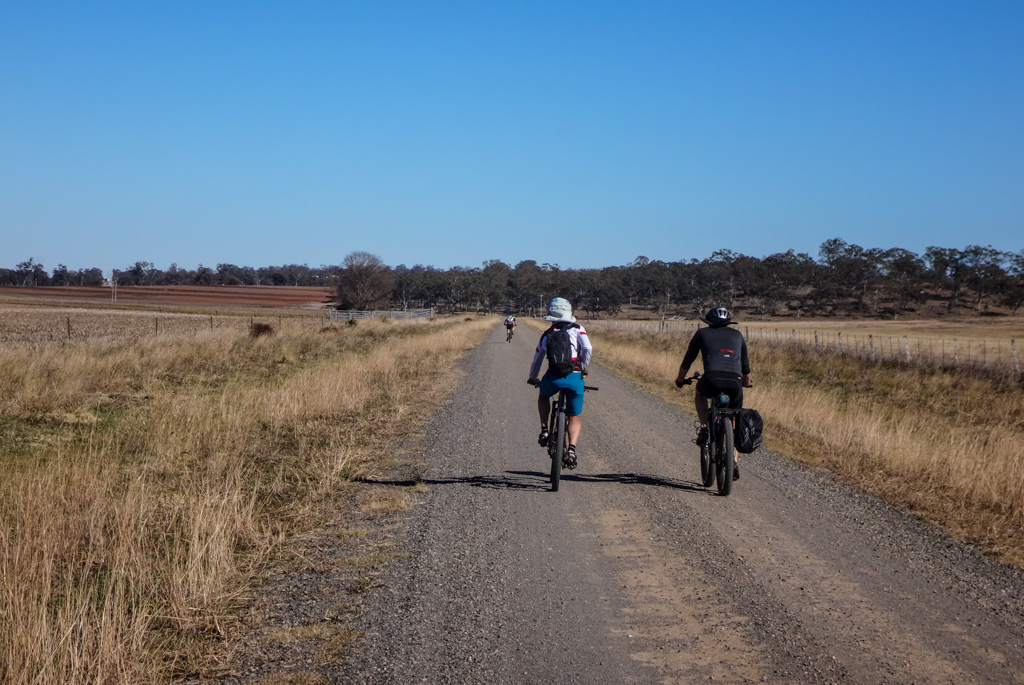 Our course led westward, up a gentle tree-covered hill.

In a few places we moved from gravel on to paved roads.

Normally I try to avoid tarmac when planning our rides, but these roads were quiet, and we didn’t mind them. 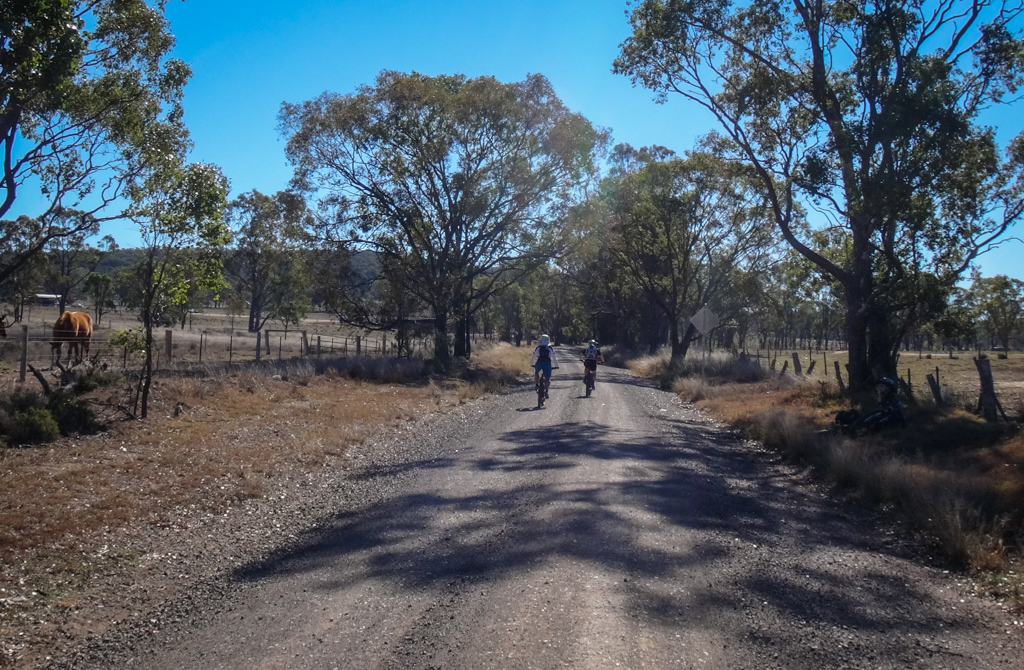 We rode up another gentle hill, then down the other side towards the Condamine River… 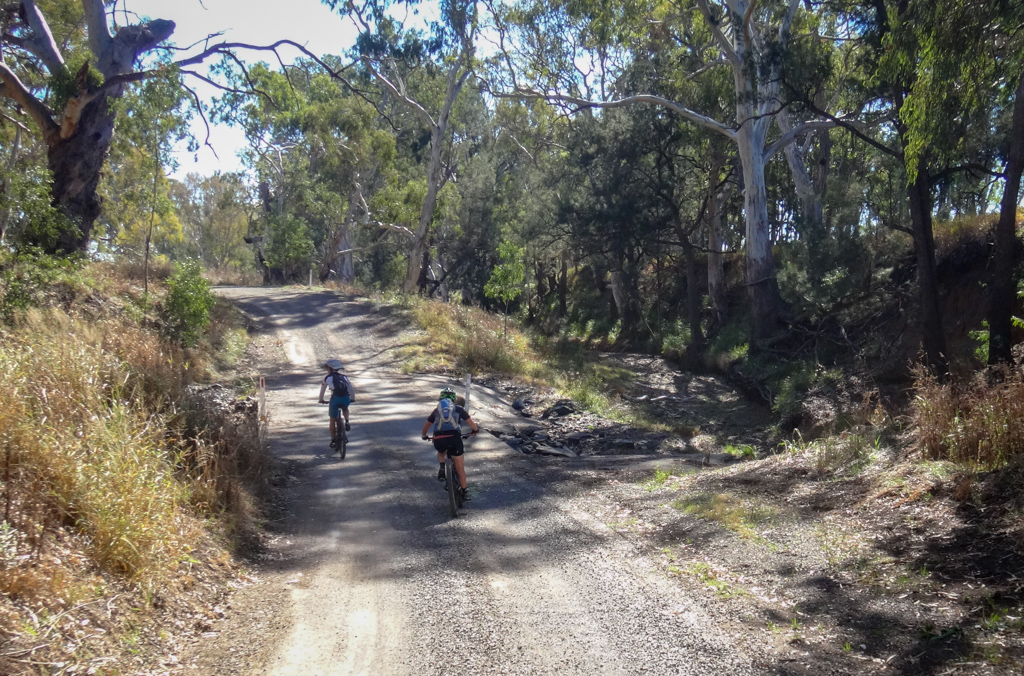 Although lush trees lined its “banks”, the Condamine was dry.

It won’t run again until this area has some generous rainfall.

This great river is part of a system that stretches across the continent from Queensland down to the Great Australian Bight. 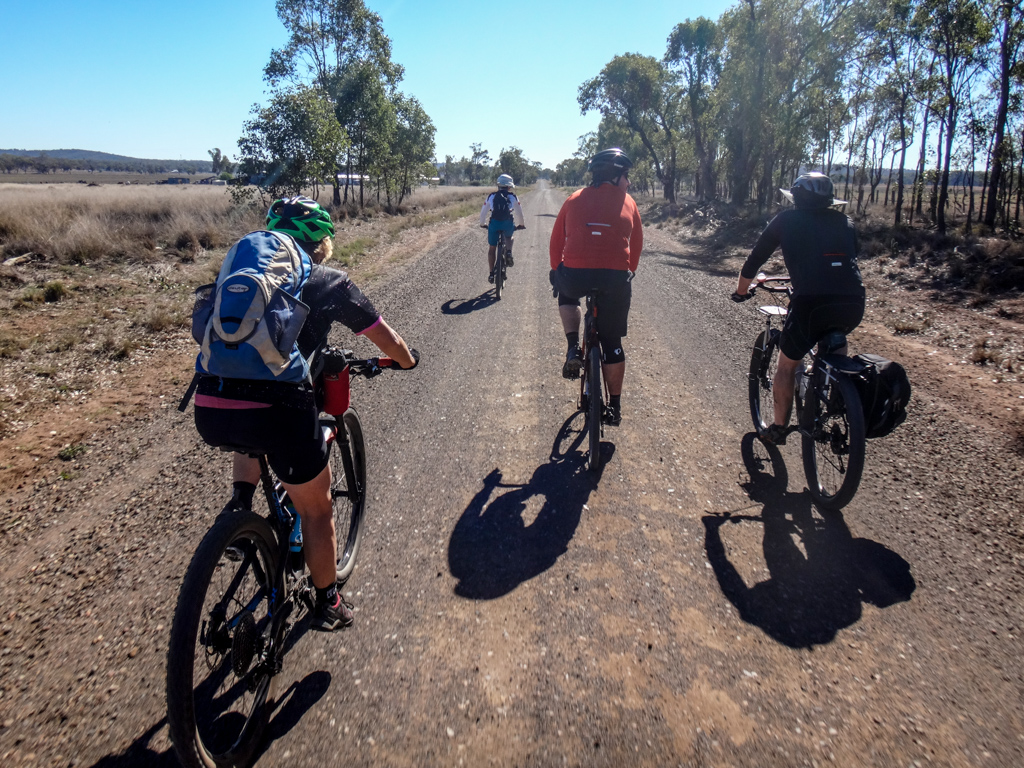 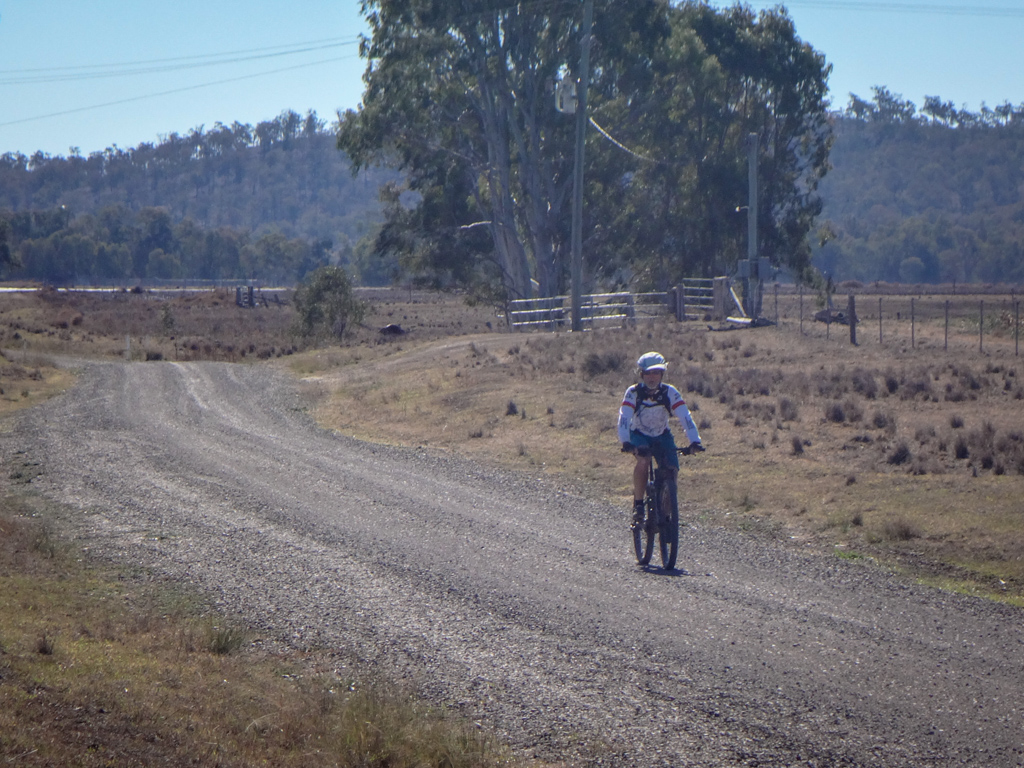 We followed Condamine River Road along the river, towards Pratten. 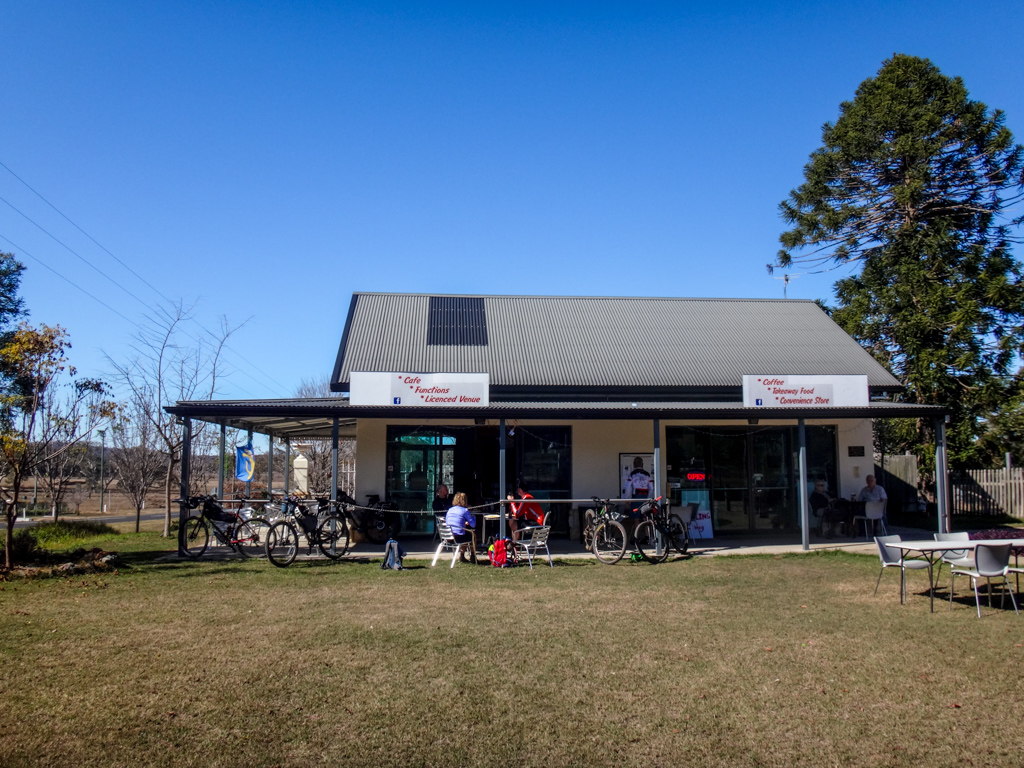 There’s only one shop in Pratten – the “Pit Stop”.

We stopped there for a hearty lunch… 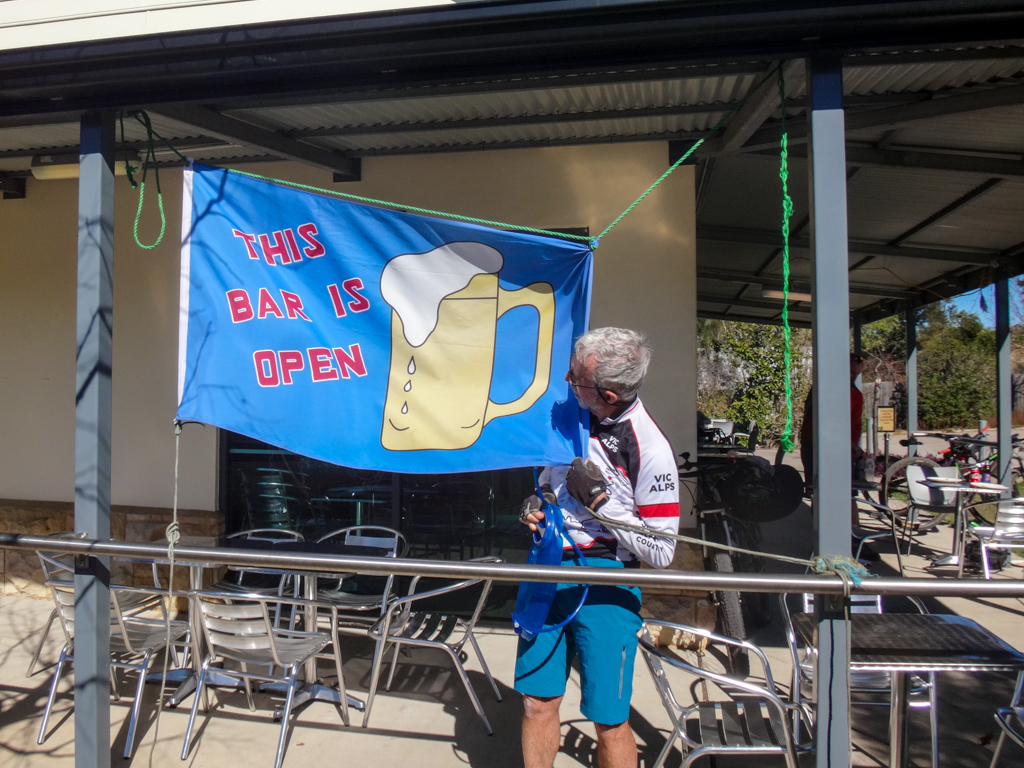 …and something to drink 🙂 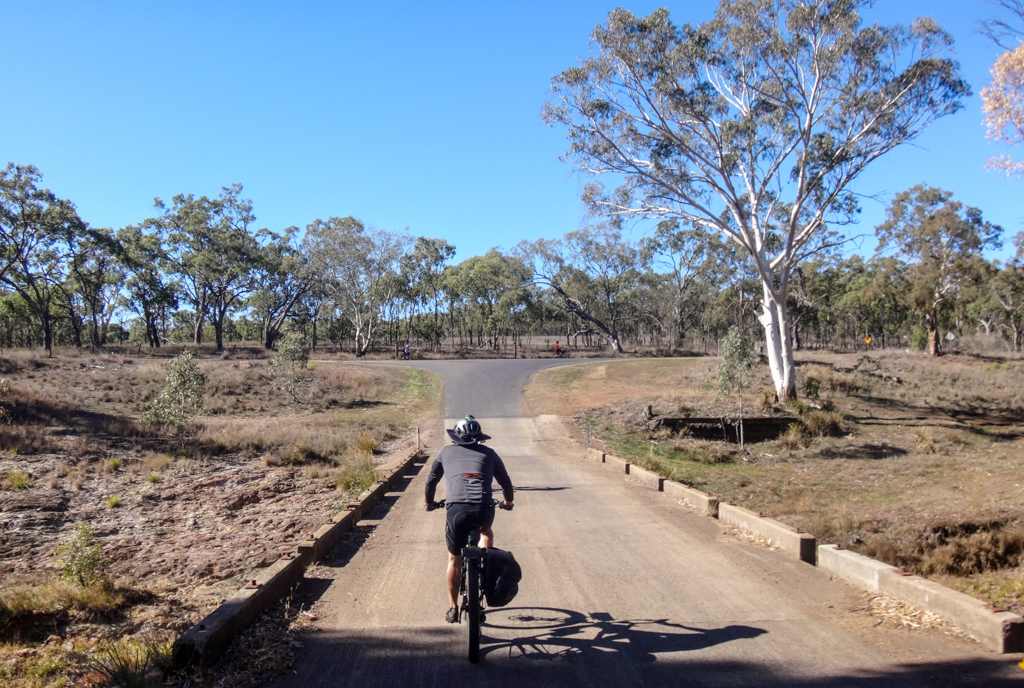 This was the mid-point of the ride.  We had come as far west as we could today.

We crossed the bone-dry Condamine a second time, and headed east towards home. 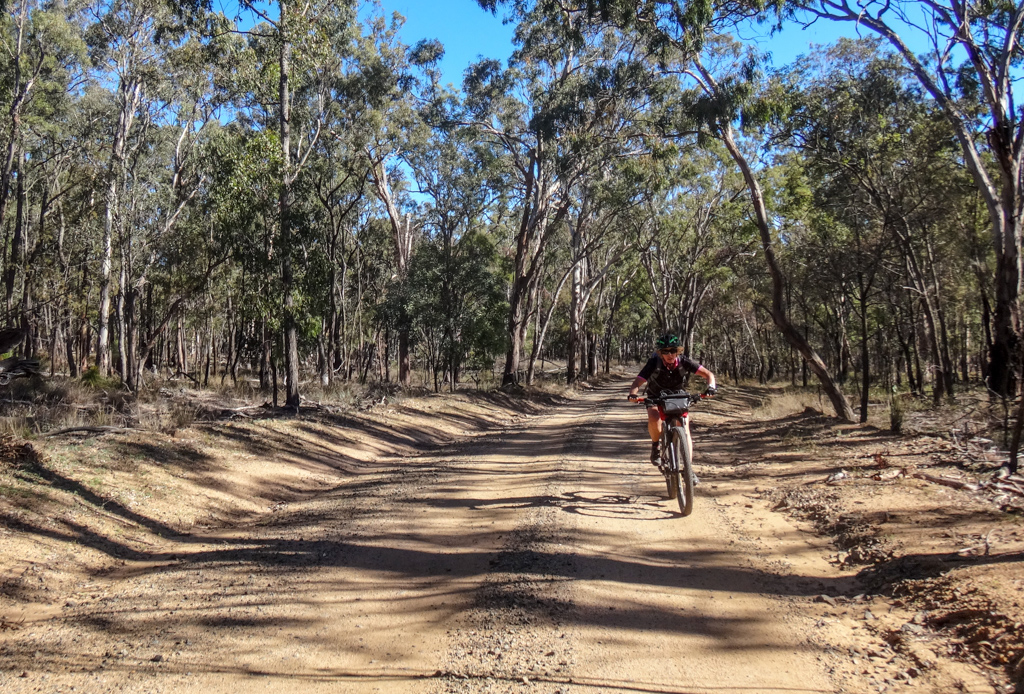 The forest which covers Bony Mountain is delightful.

We rode up Yankee Gully Road, climbing a gentle hill for about five kilometres. 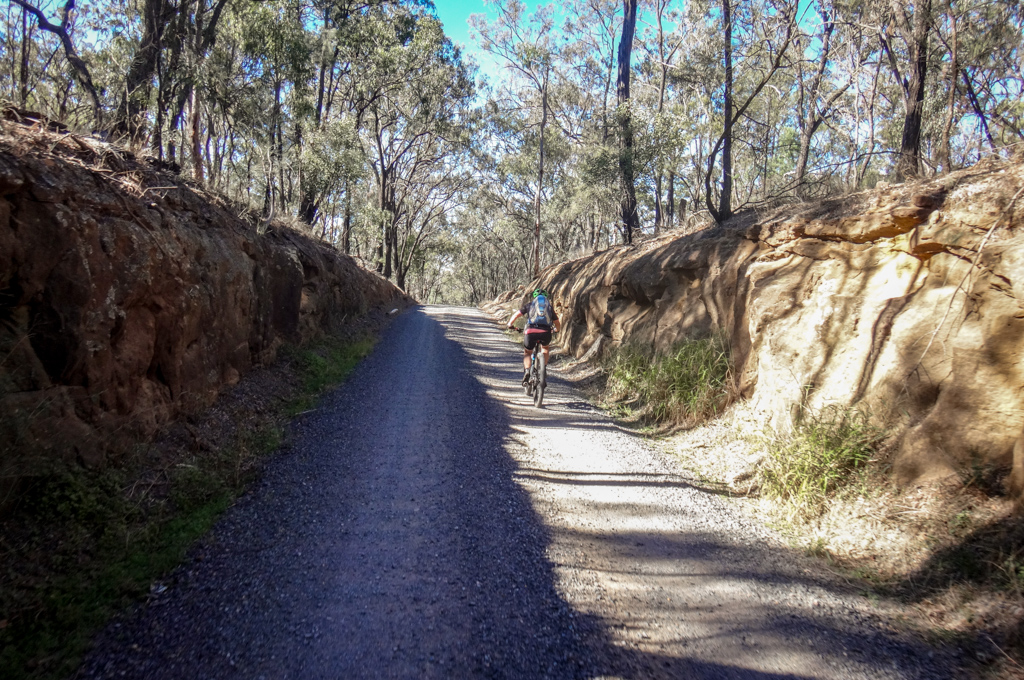 At the summit the road passed through an impressive cutting.

We relaxed and coasted down the other side. 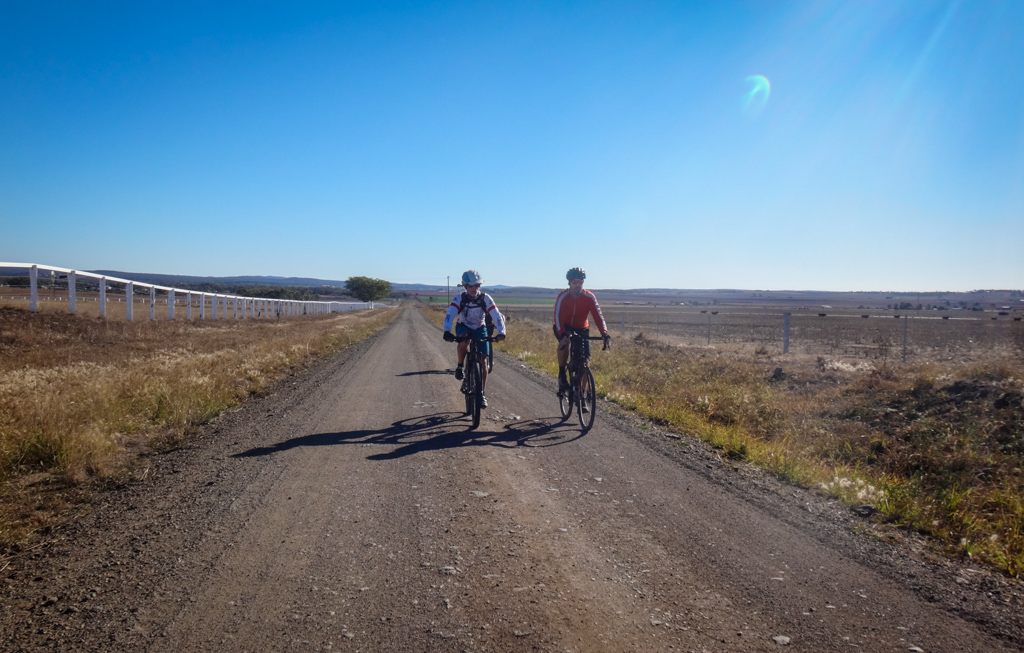 Rather than ride through Allora, we took a short cut, following a gravel road beside endless flat grazing paddocks. 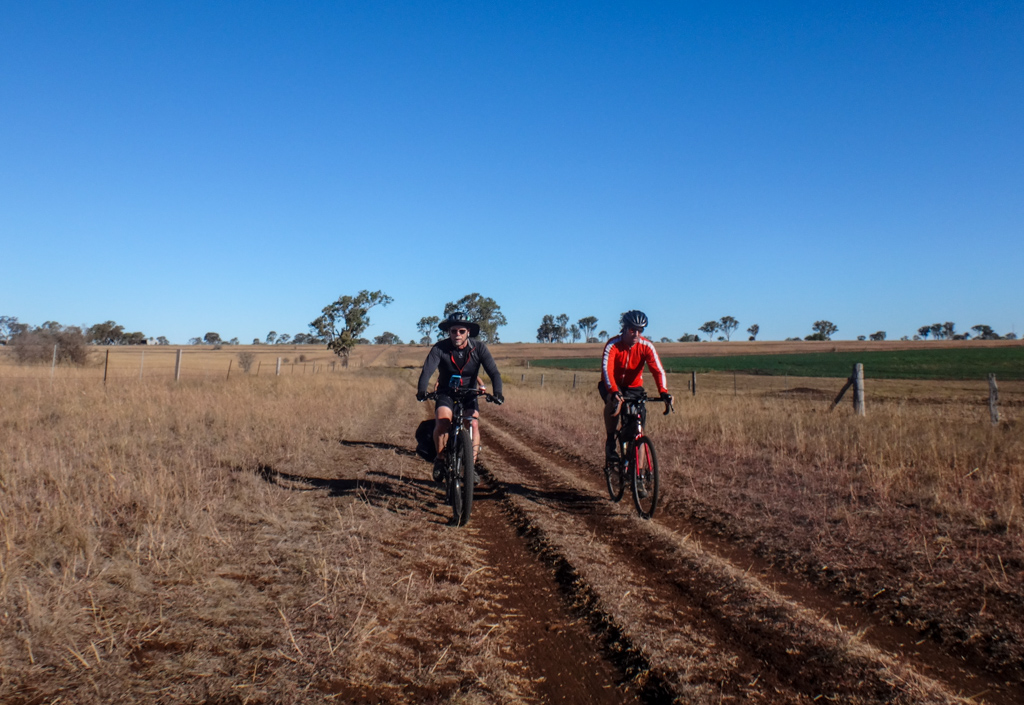 The road devolved into a bumpy stock route.

Wonderful!  We love these old tracks and could ride them all day 🙂 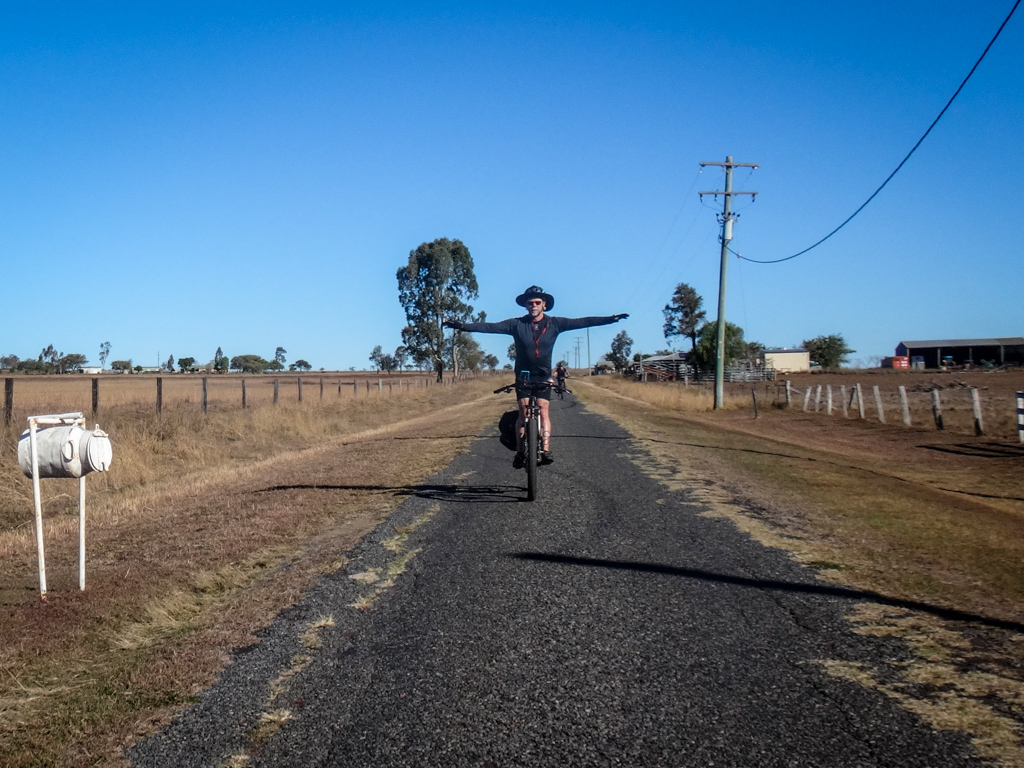 The stock route morphed back into a narrow black strip.

Jason appeared to be enjoying himself. 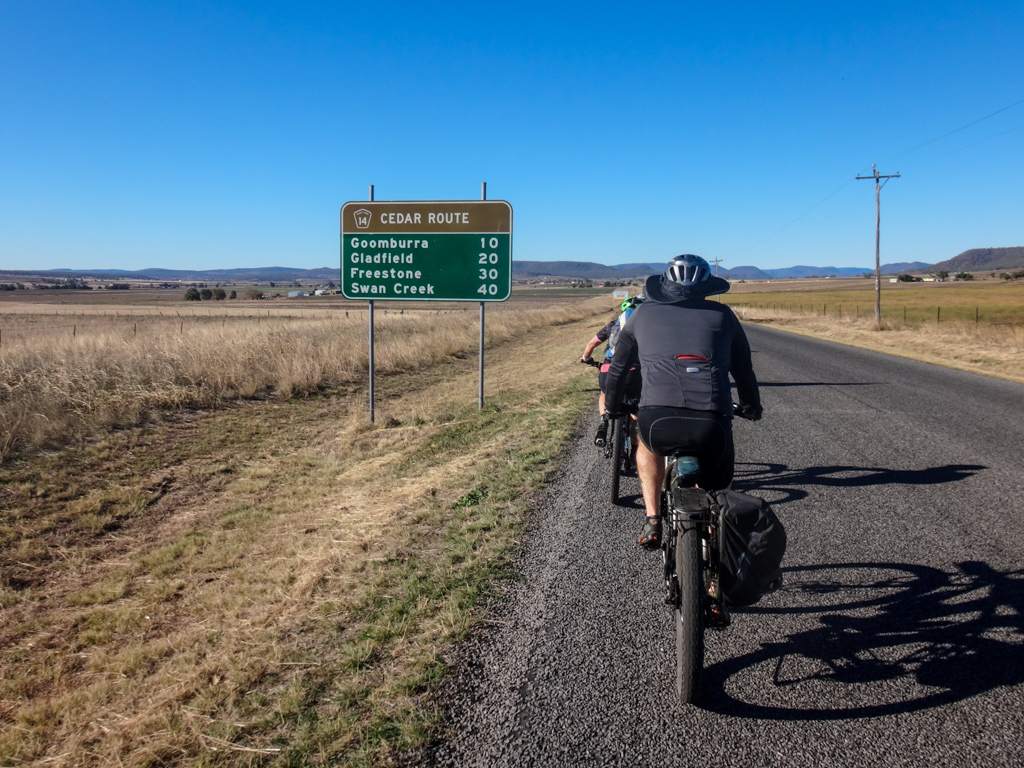 After a short stint on the highway, we turned into Goomburra Road and headed back towards the cars. 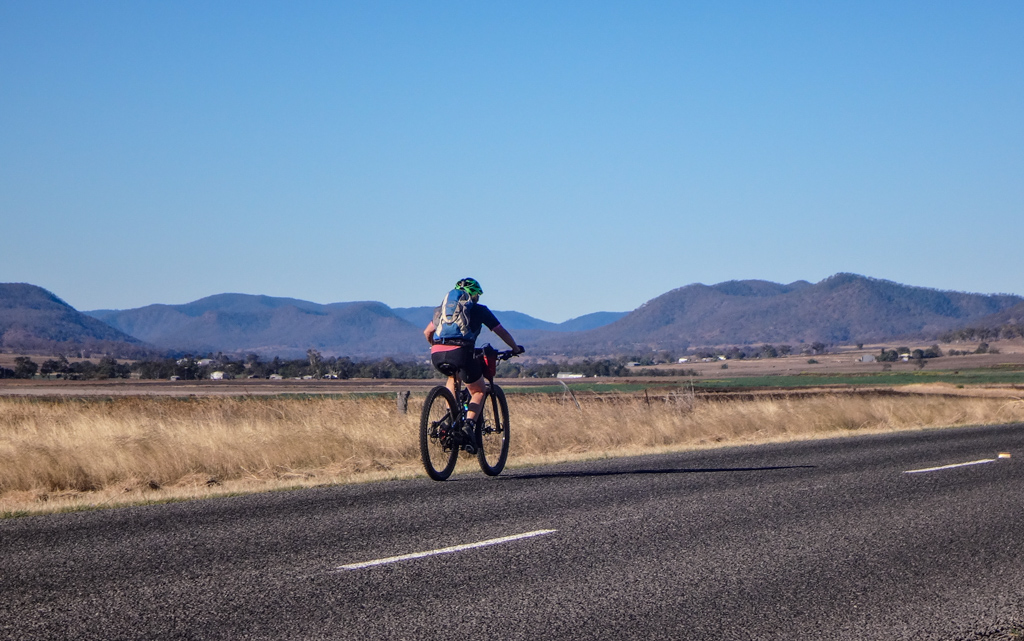 This is a beautiful area.  The wide open spaces and big skies are good for the soul.

We rode about ninety kilometres in about six hours, including breaks.

During that time we climbed about 900 metres in elevation, and I burned about 3,700 kcal.

This was a pleasant and easy ride – but I imagine you’d cook if you did it in summer.  Winter is the best time for long open rides like this.

Thanks Eric. Kaye, Jason and Justin for another fun day out. 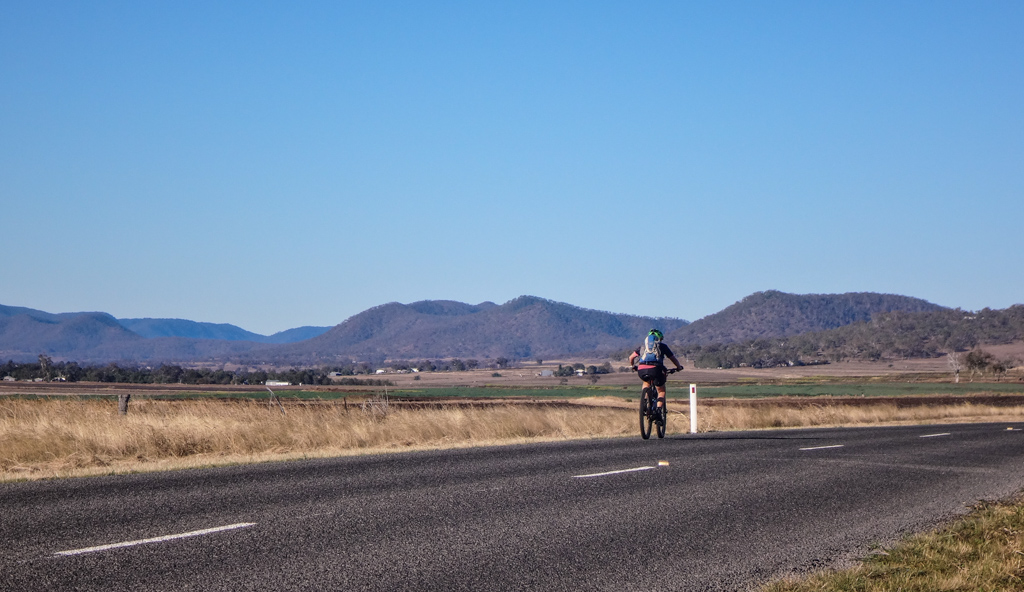