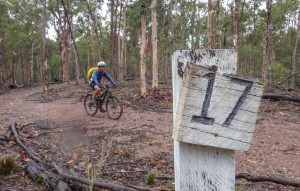 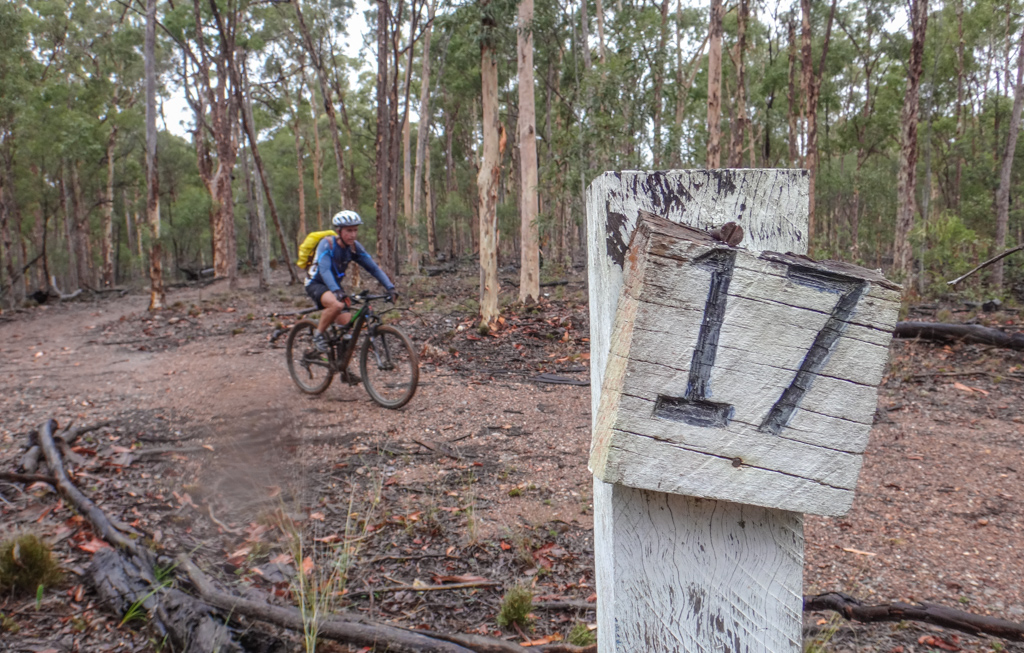 It was raining on Saturday Morning, so we decided to keep driving west until the rain stopped.

We drove for almost six hours and ended up in Leyburn, west of Warwick, on the Southern Downs. 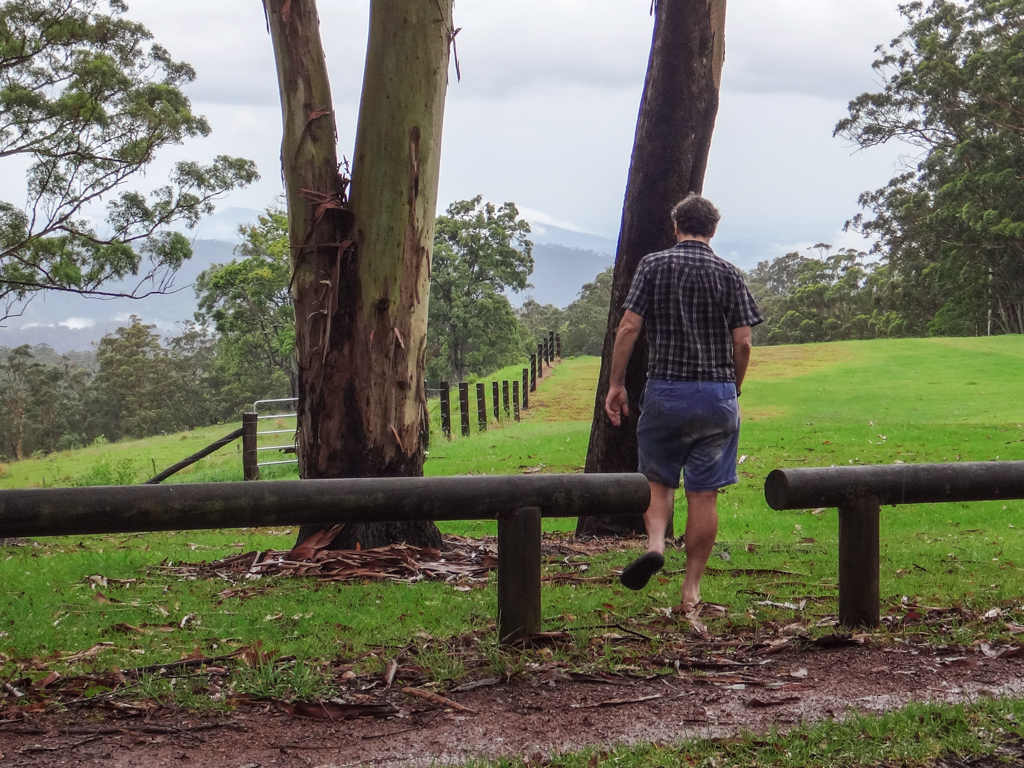 We had originally planned to ride at Belthorpe, at the foot of the Conondale Range, but the wet weather coaxed us westward, past Esk and Toogoolawah, then up the range to Ravensbourne. We got out and had a look around, but decided we’d try our luck further west. 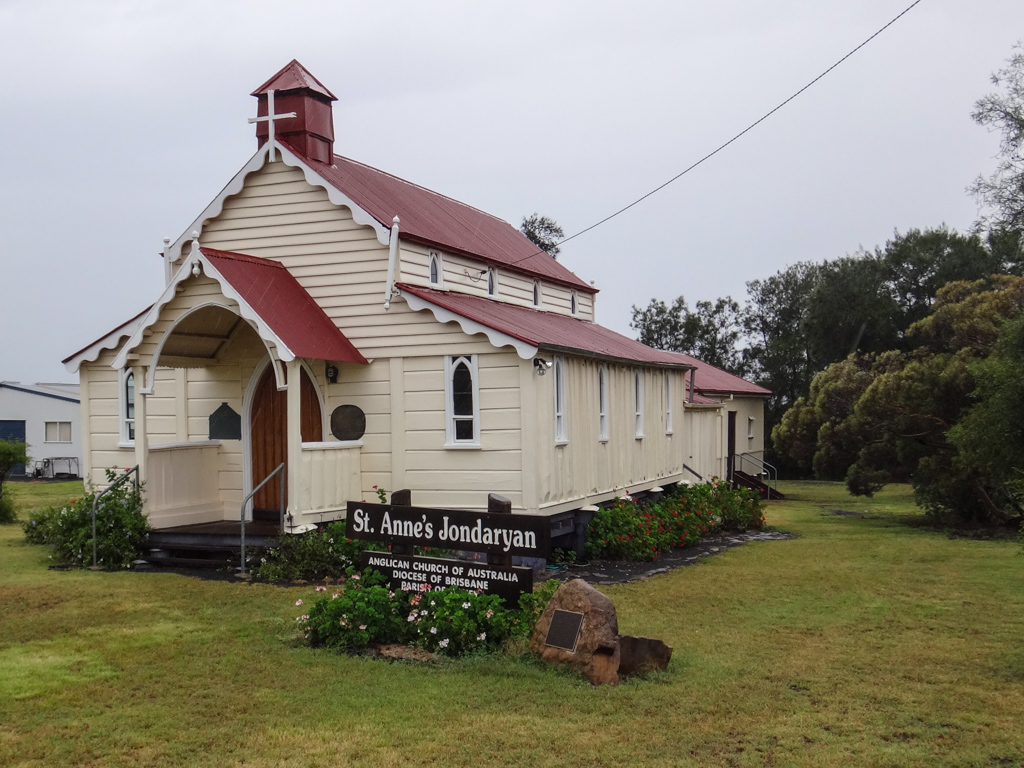 Out past Goombungee we drove, then south-west to Jondaryan. This was miles away from home.

We checked out an old church building that Eric had come across in his travels. 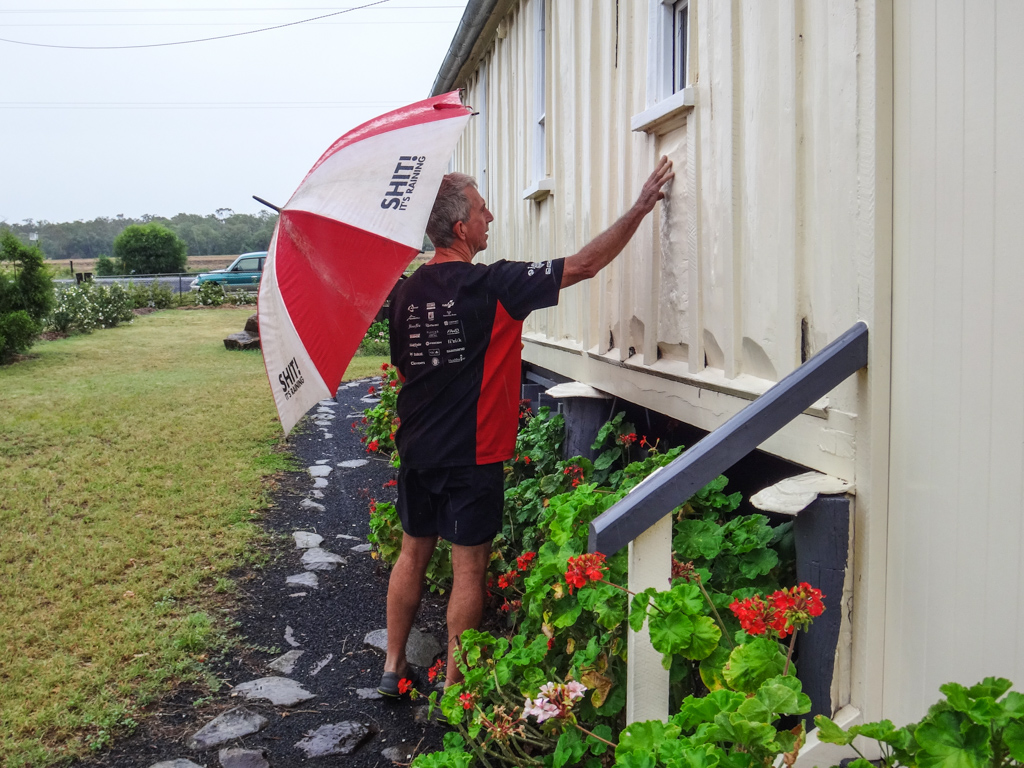 Built in 1859, St Anns is the oldest church building still in use on the Darling Downs. The unusual split timber on the side of the building is a sign of its early construction.

But… as the writing on Eric’s umbrella said, it was still raining, so we kept driving…

After 350km we ended up in Leyburn.

It was still raining, so we decided to stop for lunch in the local pub. 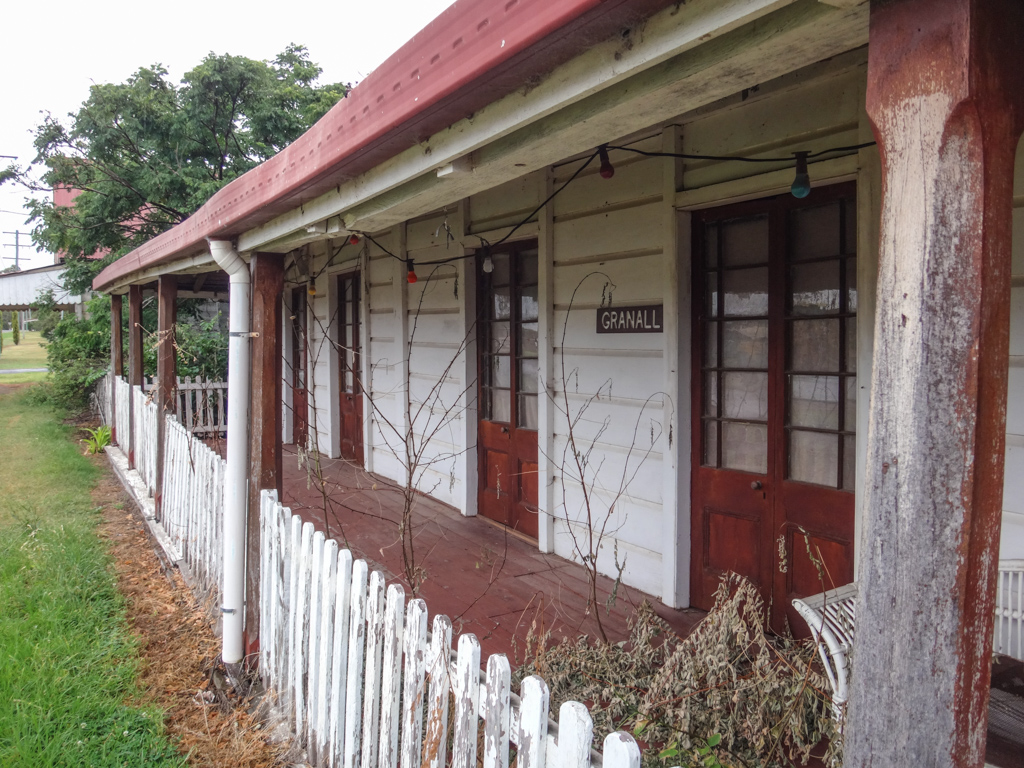 Leyburn is a fascinating place.

The “Granall” building was an old Cobb & Co coach stop.

I wonder how long it would have taken the coach to drive 350 km?

Every year the town holds a race for classic old cars which sprint around the local streets.

It has a large free camping ground just a couple of hundred metres from the pub. 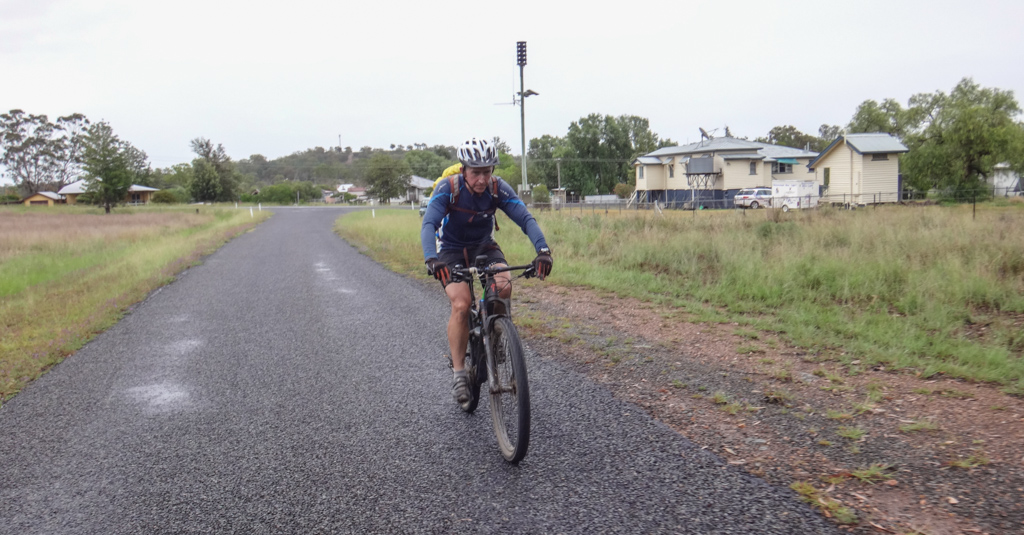 As if by magic, the rain stopped after lunch, so we unpacked the bikes and headed up the road towards the Leyburn State Forest which is right on the edge of town. 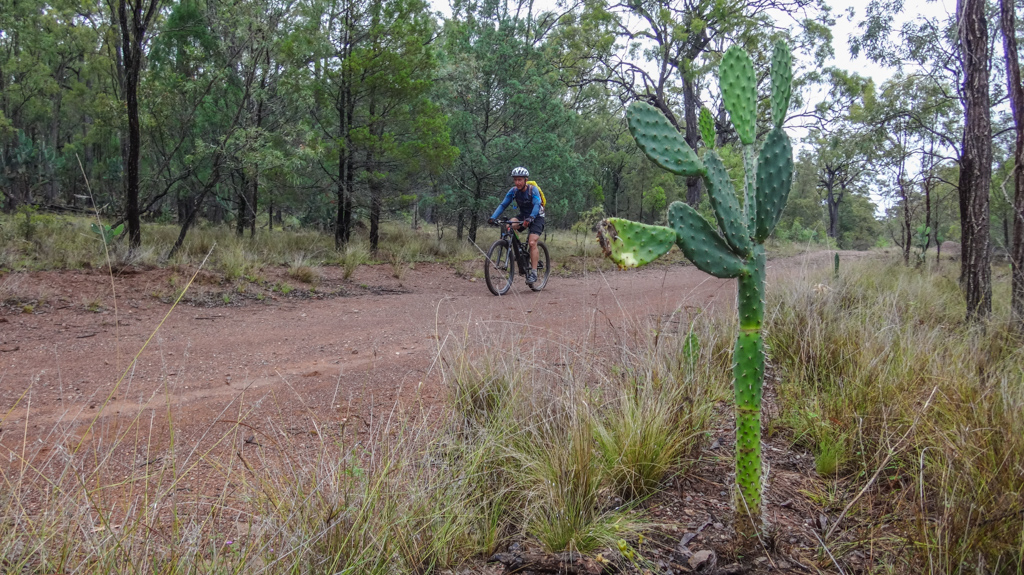 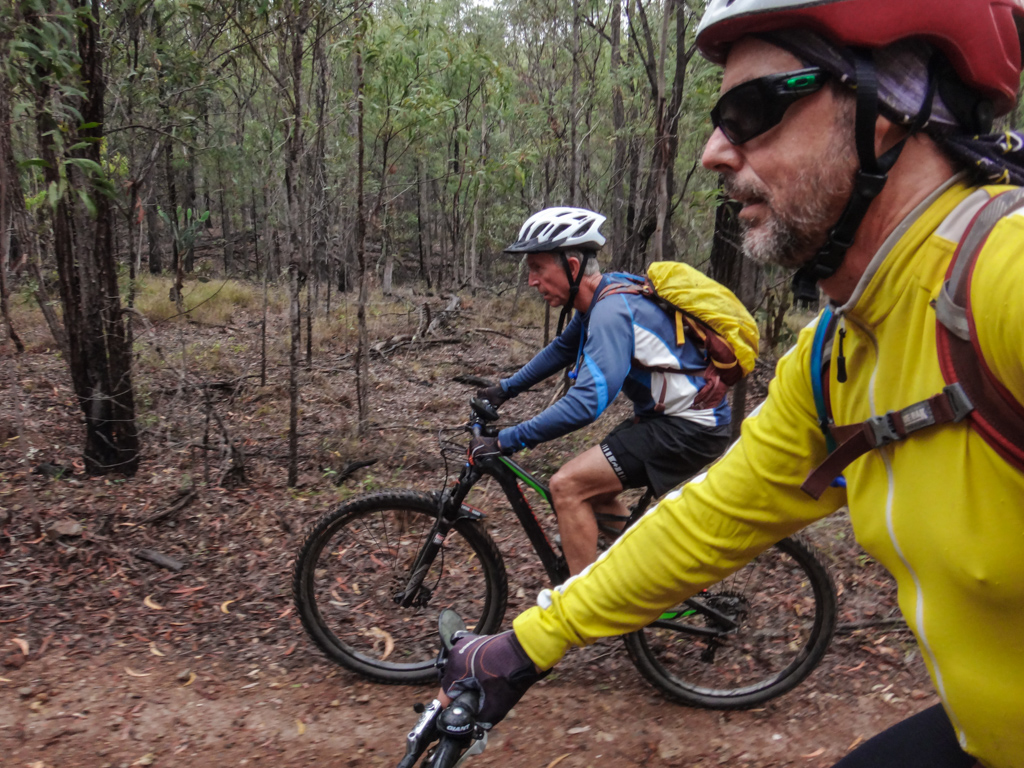 The ground was soft and muddy from the overnight rain, but both of us were glad to be riding instead of driving – even if it only was for a short time. 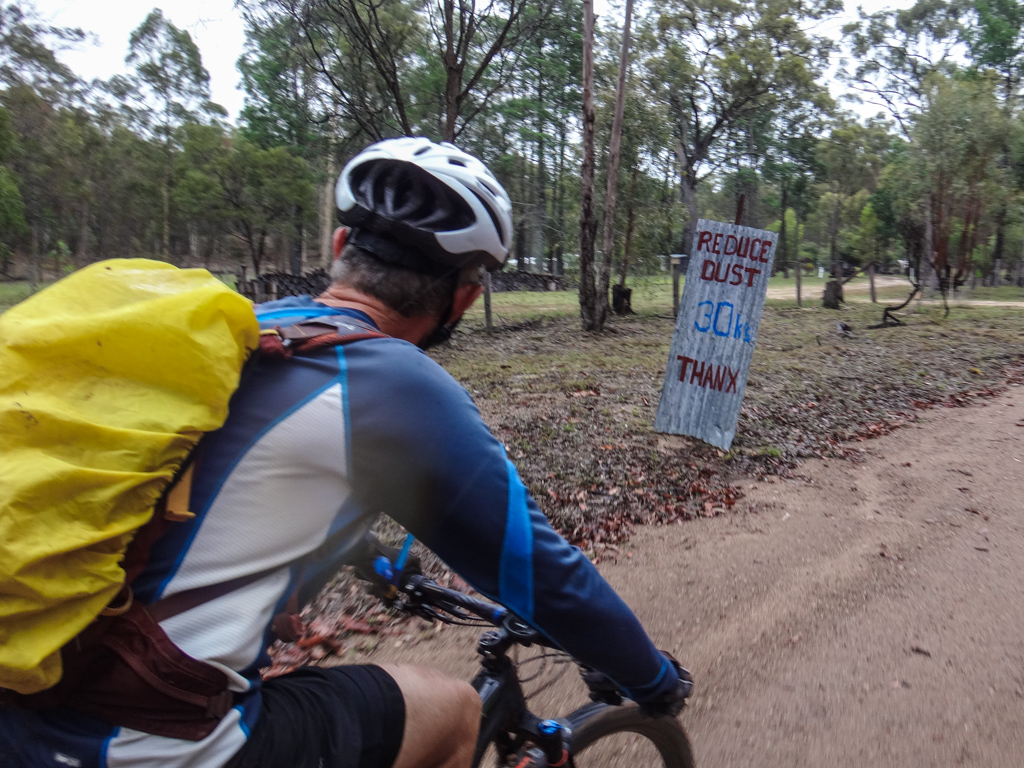 This place is usually very dry, which is probably why someone put a sign outside their gate asking passers-by to slow down and reduce the dust.

Eric and I didn’t have any problems staying under the 30 km/h limit.

The heavy rain must have delighted the local farmers. 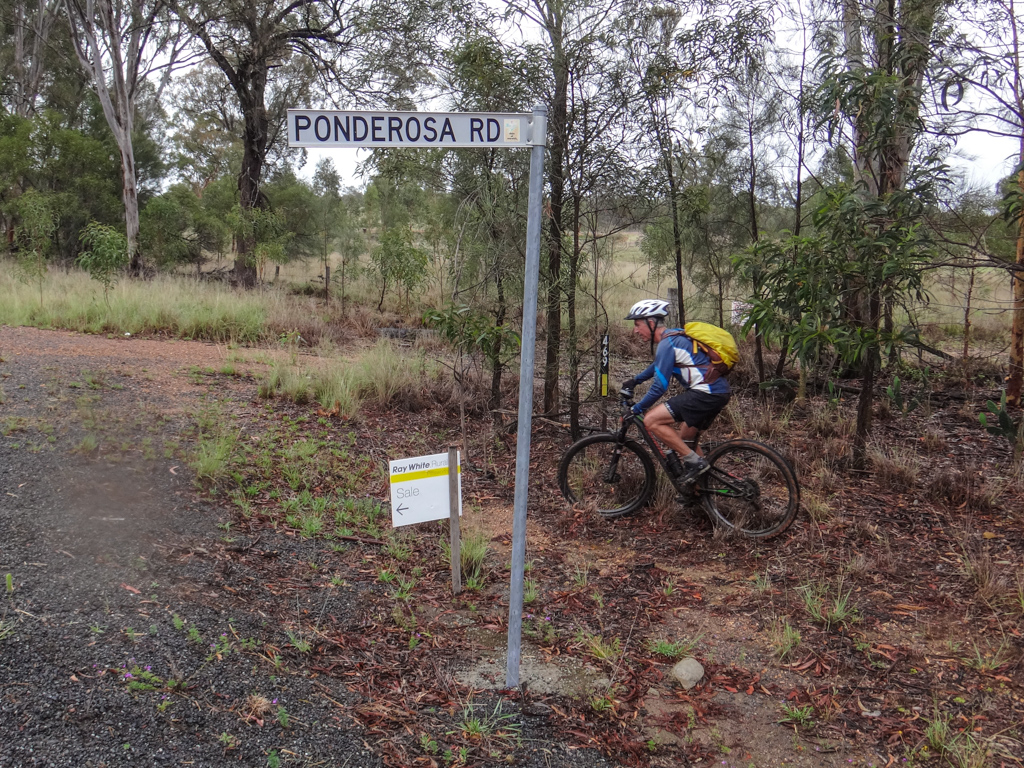 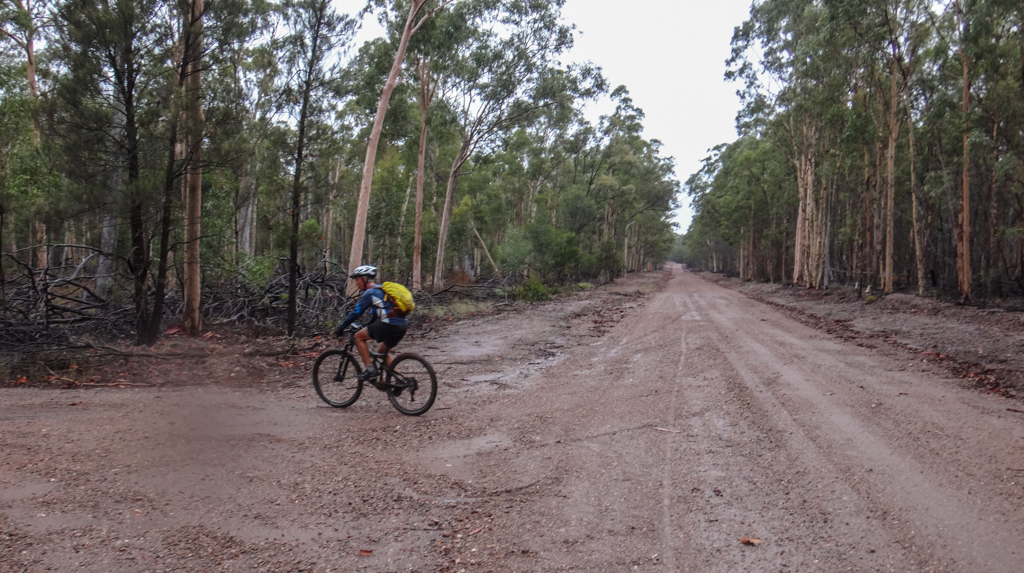 Our plan was simple – since we were riding in new territory we would try to track the outskirts of the state forest, and get a log of the major tracks. 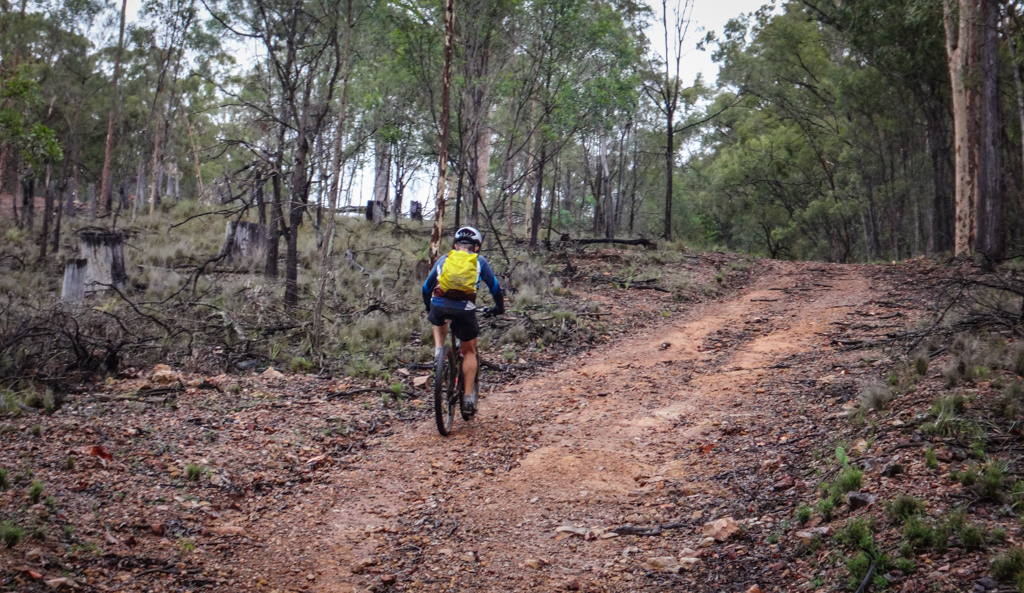 Although I had a basic map in the GPS, we had no course, so we intended just to ride in a large clockwise loop.

We followed gentle undulating fire trails eastwards for about an hour before deciding to follow some of the narrower tracks into the bush. 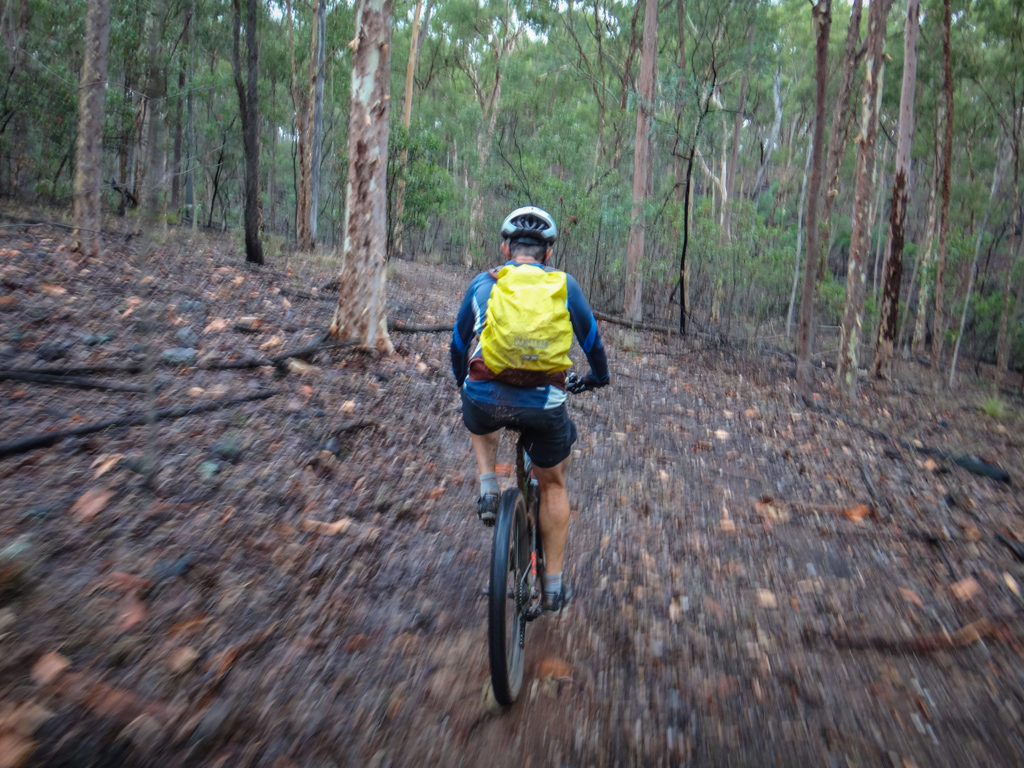 In unfamiliar territory, it’s challenging not having a pre-plotted course. A lot of the tracks didn’t match up with the map.  If it looked interesting, we followed it. 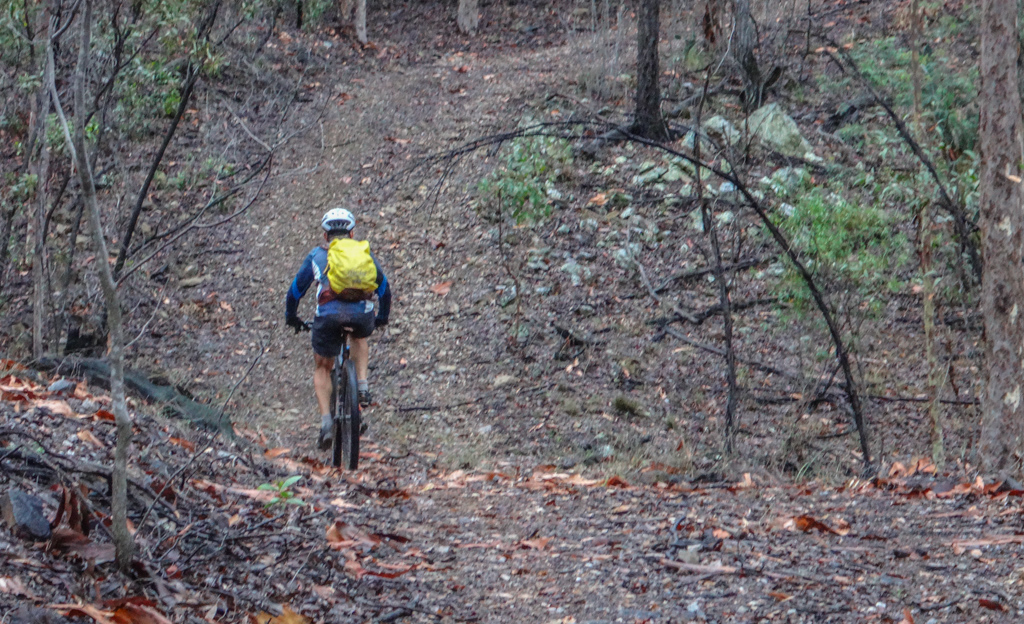 We both commented about the lack of running water – even in gullies after heavy rain.  I imagine this would be dusty country on a hot dry day. 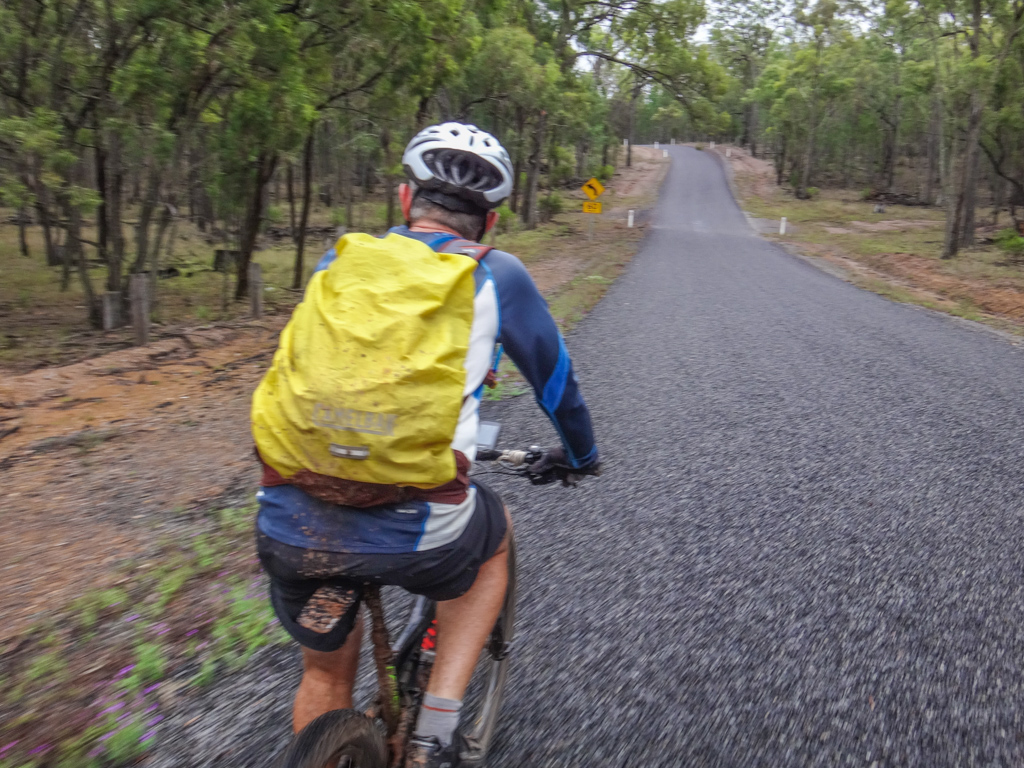 After a quick downhill run we were both surprised when the trail spat us out onto a paved road.

Mountain Bikers prefer dirt, so we kept an eye out for any tracks leading back into the bush. 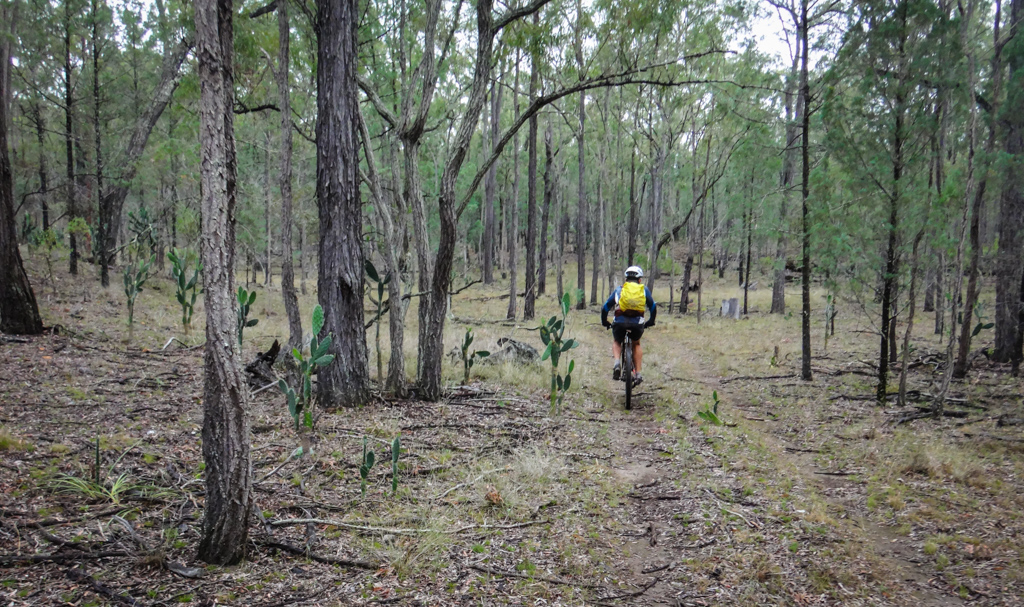 “This one looks ok”, I optimistically said to Eric. 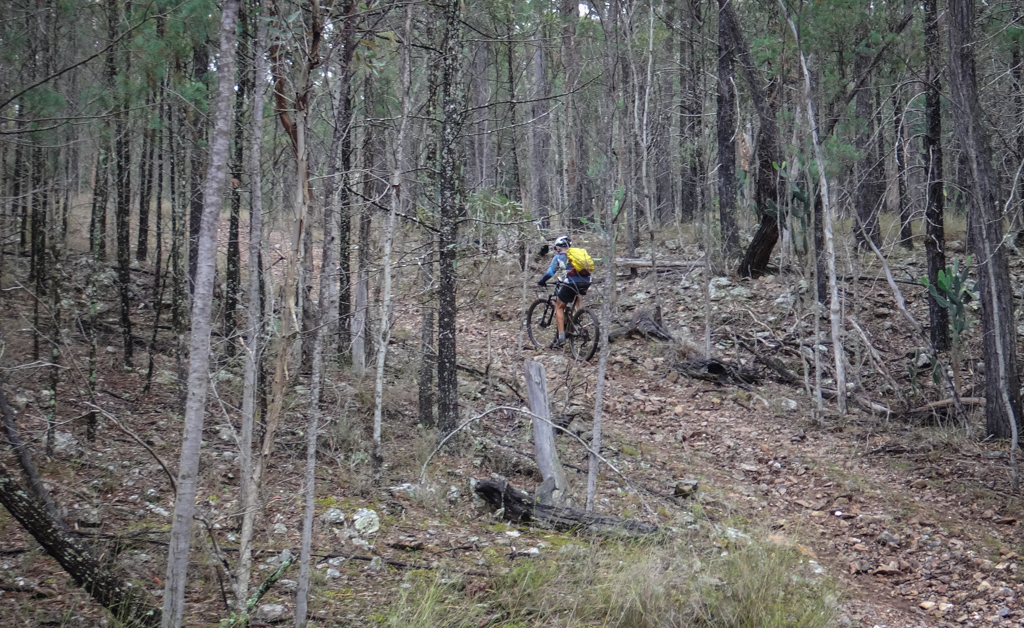 “I think we picked the steepest track in the forest,” Eric replied. 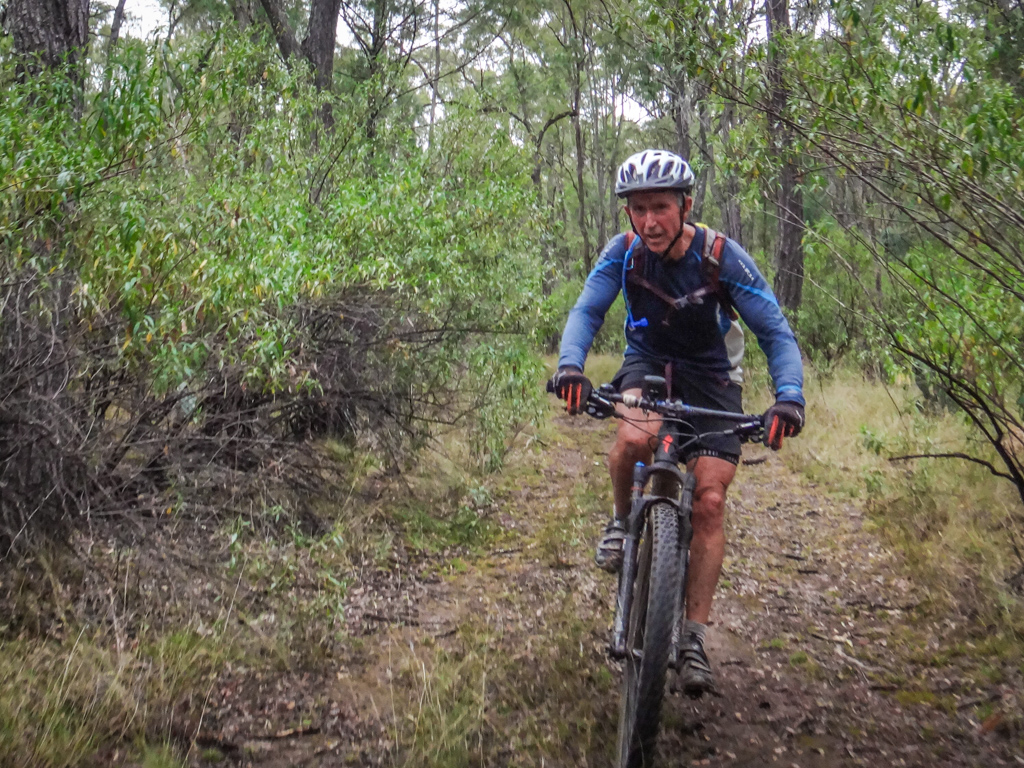 The bumpy track eventually looped back to where we had started.

We retraced our steps back to the car. 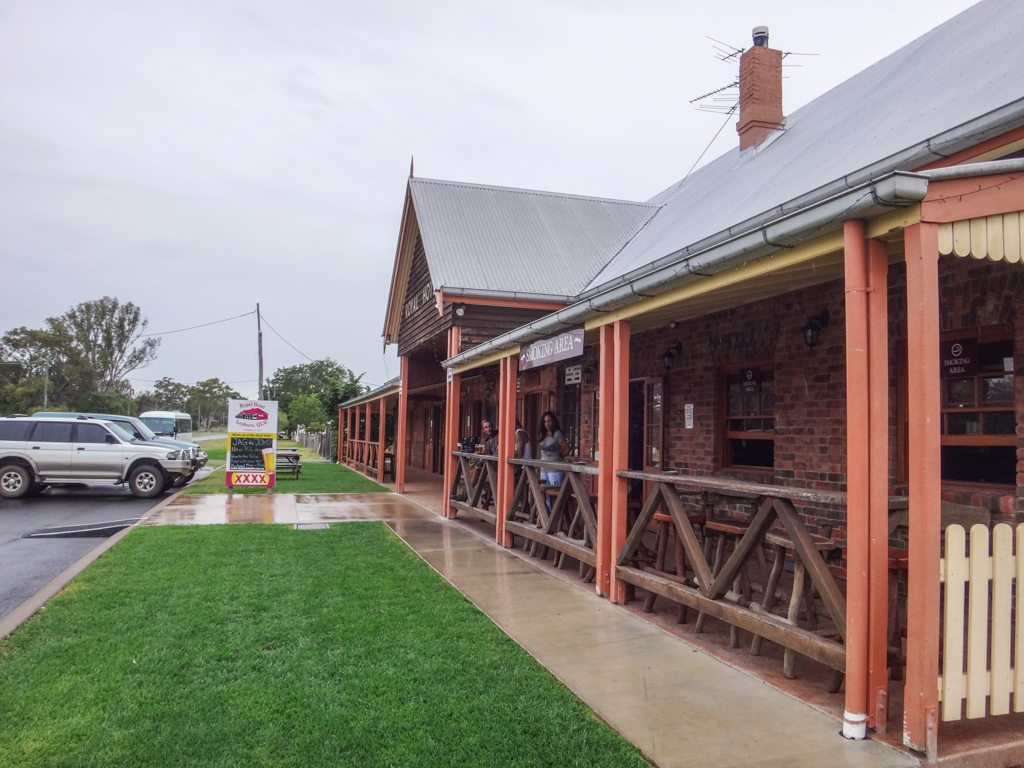 We rode a total of 27km in about two and a half hours.

On a cool damp day it was an easy ride – I’ll rate it 5.5 out of 10 on the tough-o-meter.  There are one or two steep bits, and I imagine it would be much less comfortable on a sunny day.

This was a little ride, especially considering it was such a long drive – but mountain bikers sometimes go to extraordinary lengths to get a ride in on a rainy day.

Thanks Eric for your company on an enjoyable rainy day!