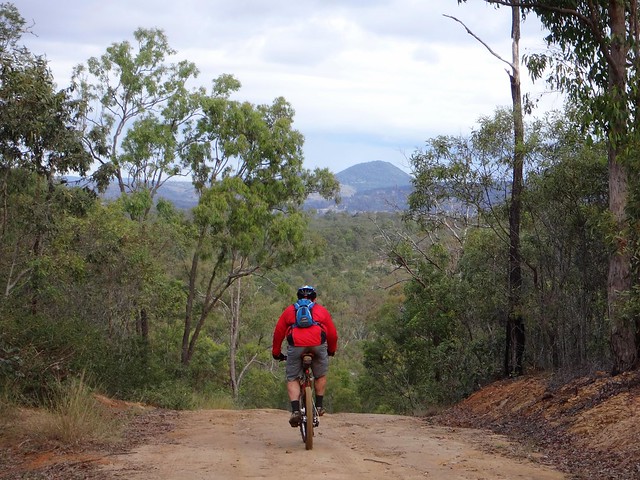 Eric and I had a couple of objectives today:

I had a few gaps in my Ride Network Map which I wanted to fill in. We’ve done a few rides in this area recently, and it would be satisfying to link them all up.

Also, Eric wanted to check out a few tracks near Toowoomba to help him plan an off-road route from Brisbane to Toowoomba. 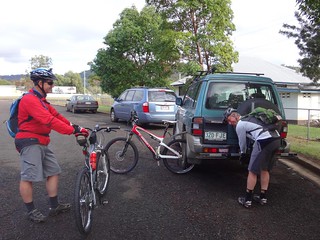 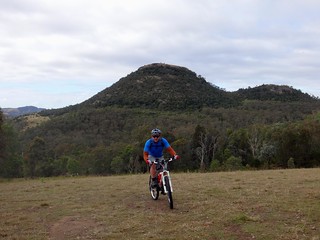 Jaime from Toowoomba Mountain Bike Club kindly agreed to join us for the ride. When exploring new areas, it’s always helpful to bring a local 🙂

We started our adventure at Withcott – a small town at the bottom of the Great Dividing Range. While heavy traffic whizzes through here trying to pick up speed before climbing up the hill to Toowoomba, our plan was for quieter trails. We rode south from Withcott up some quiet back streets towards Tabletop Mountain. Berghoffer Drive and Tabletop Road are very steep paved roads. If you’re interested, have a look at the Google Street View link here. We slowly ground our way to the top of the road, wondering what we had got ourselves into. 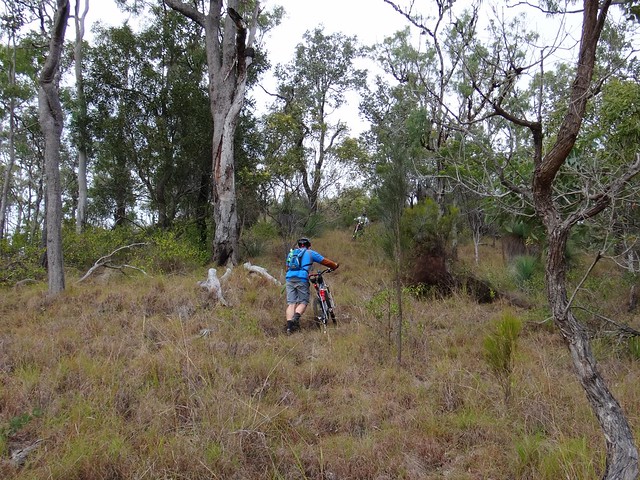 But as any seasoned Mountain Biker will tell you (especially if Road Bike riders are within ear-shot), paved roads, even steep ones, are nothing compared to the challenge of off-road climbs. 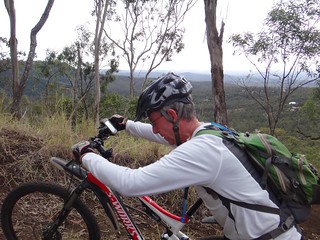 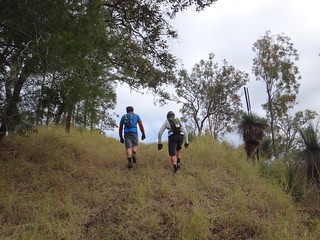 We slowly climbed up the range – sometimes pedalling, mostly pushing our bikes upwards. 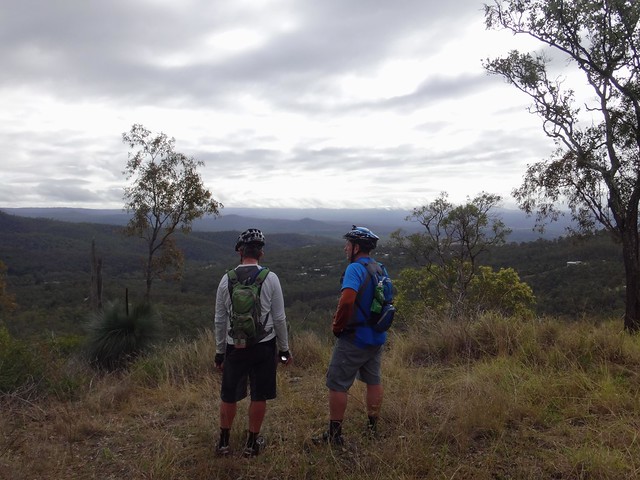 The views to the east were delightful. 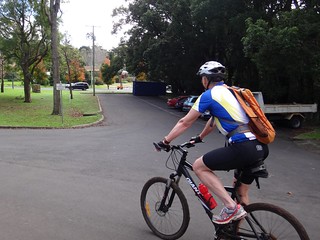 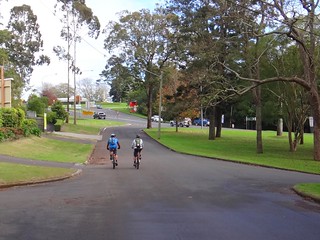 My brother-in-law, Paul, lives in Toowoomba, and met us at the top. We carefully scurried across the busy Warrego Highway at the top of the Range and made our way towards Jubilee Park. 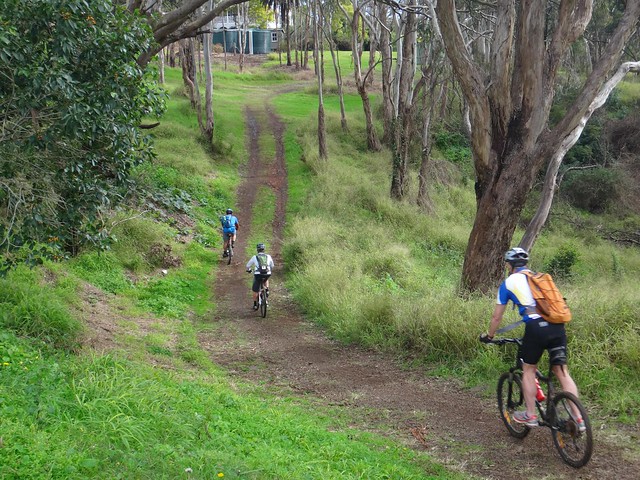 Jubilee Park is a mixed-use reserve which sits on the edge of the mountain stretching down the hill from Prince Henry Heights and Mount Lofty towards Withcott. 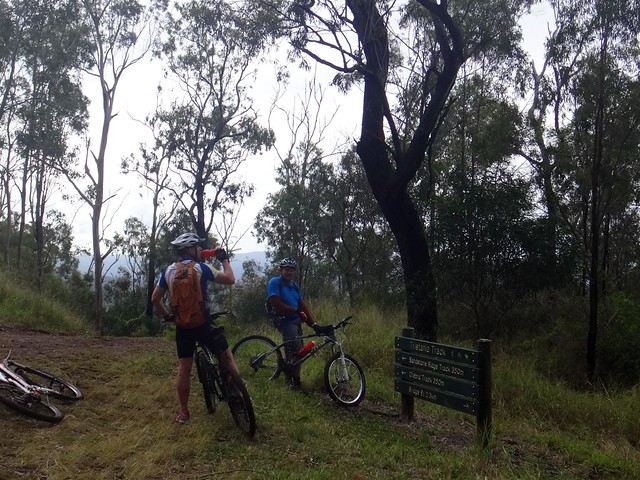 It boasts a variety of single tracks downhill runs, and a “bridle trail”. Because of recent rain, we decided to avoid the single tracks, and rolled down the hill along the bridle trail. 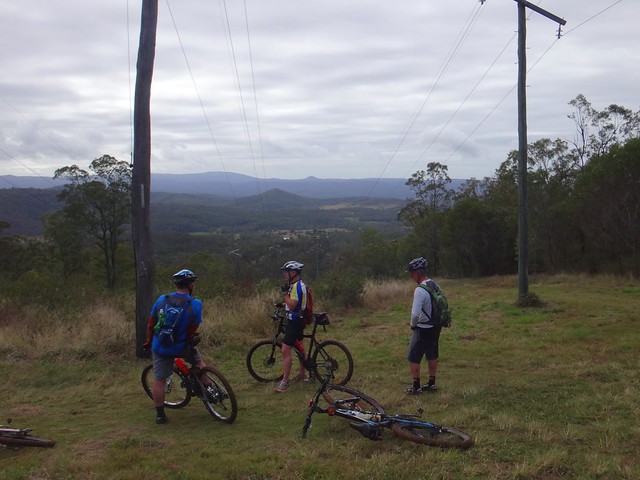 We had more great views on the way down, but the sticky mud quickly collected on my wheels and totally clogged them up. I had to pull out handfulls of mud from the wheel arches and chain stays just so I could get the wheels turning again. 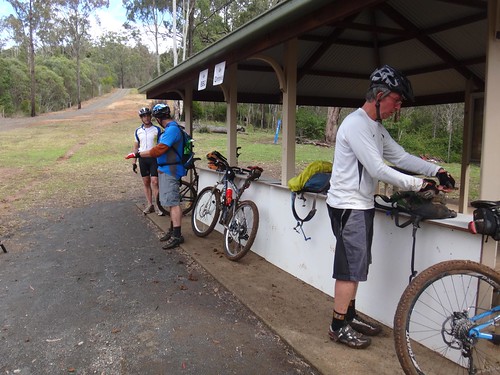 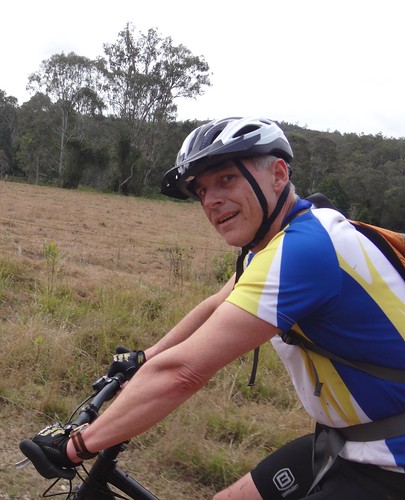 When we reached the bottom we took a few minutes out at the picnic shelter to scrape off the rest of the mud and prepare for the next big climb. I was a bit worried about Paul. He had only ridden a bike once in the last year because of an injury, and I wasn’t sure how he’d cope with the next bunch of steep muddy hills. 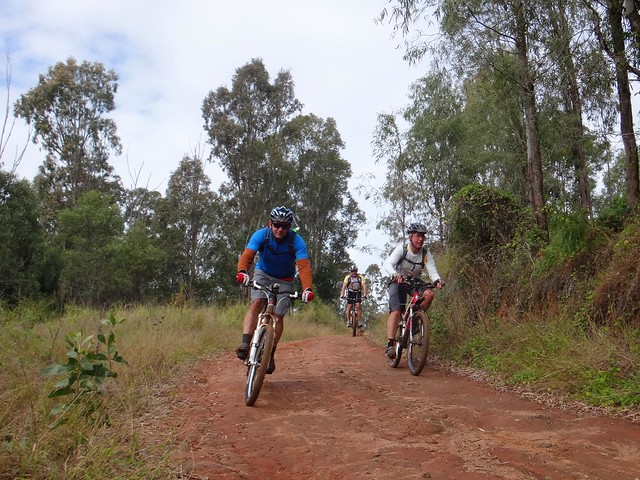 Wallens Road winds back up the range from Withcott to the railway siding at Ballard. There are very few flat sections. It’s all either uphill or down. In wet weather, most of it is muddy. 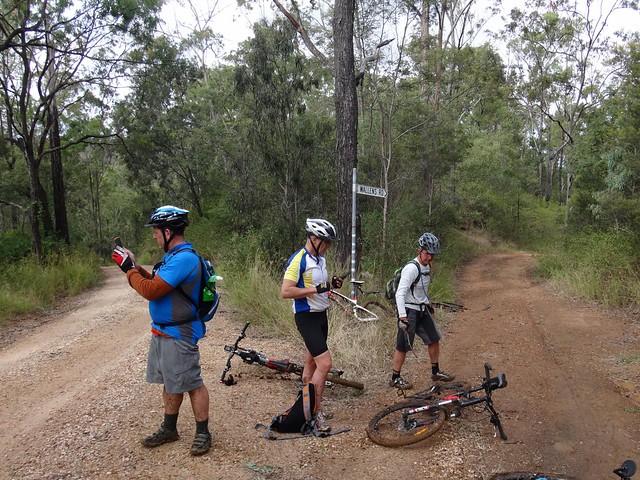 We slid down several precipitous slippery tracks, and heaved the bikes up some equally challenging slopes before finally emerging to the luxury of reasonably graded dirt road. Jaime assured us we were only 15 minutes away from our lunch stop at Spring Bluff, so Paul put in a quick call to Karen to drive down to pick him up and meet us for lunch. 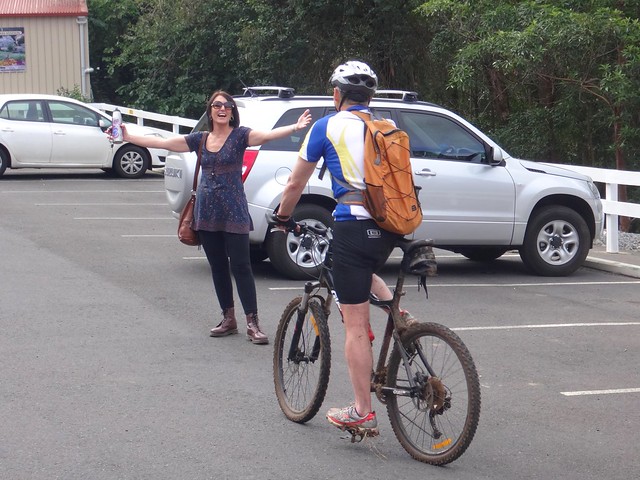 The short drive up to Spring Bluff Railway Station involves a nasty little 25% climb. The thought of lunch kept us turning the pedals. Paul had an added incentive as Karen was watching. Well done, Paul. That was a great effort for someone who hasn’t been on the bike much lately. 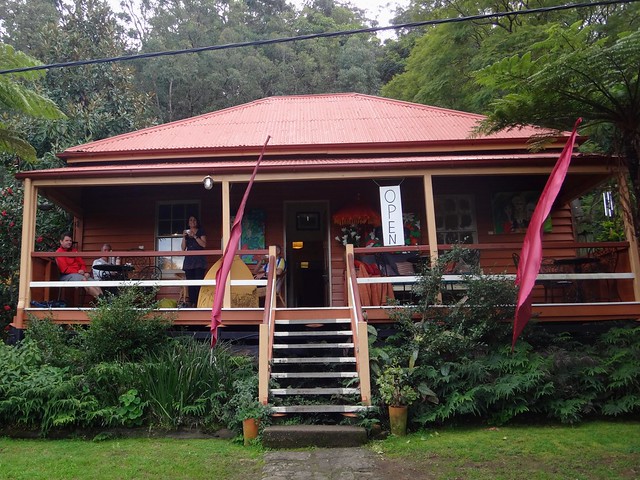 Eric often says “Hunger makes the best sauce”. I agreed with him as I inhaled my delicious burger. 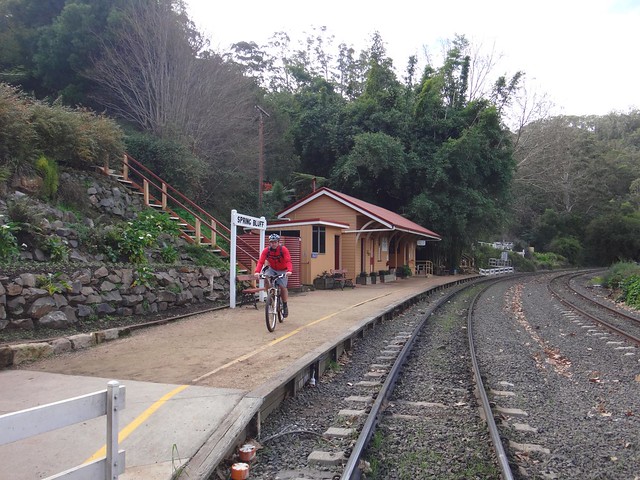 The railway line up the Main Range was constructed between 1864 and 1867. Highfields Railway Station was important because it served as a watering stop for locomotives struggling up the range, and was a loading point for Timber and Dairy products from the Highfields area. Railway Commissioner Gray was particularly fond of the area, and renamed it “Spring Bluff” in 1890. In its heyday in the 1900’s, the station handled over 5,000 passengers per year.

These days it’s much quieter, although you can still sometimes catch a steam train to Warwick. 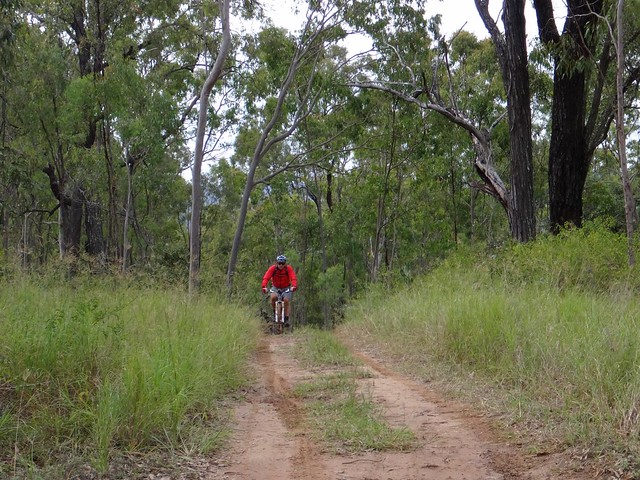 After lunch we enjoyed a leisurely roll down the hill towards Murphys Creek.

Then, heading into the bush along “Green Gully Road”, we made our way towards the Bicentennial National Trail (BNT). 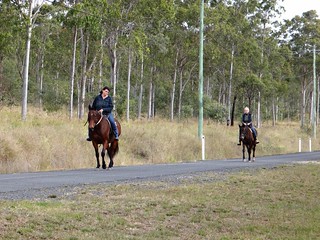 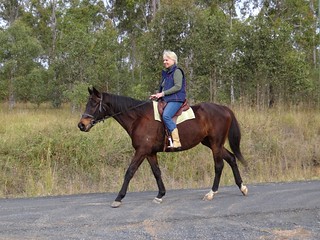 It’s always nice to meet fellow travellers on the trail. I don’t often see bikes like this though 🙂 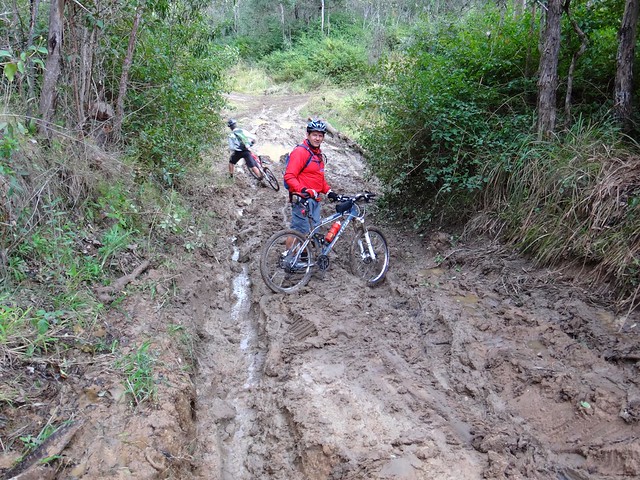 The gruelling mud on Green Gully Road made progress very difficult. We couldn’t ride much of it, because the mud stuck to the wheels. In fact even when I pushed the bike, the wheels became clogged with mud. So I carried it. It was hard work, but I laughed about it – even a muddy day on the bike is better than a day indoors. 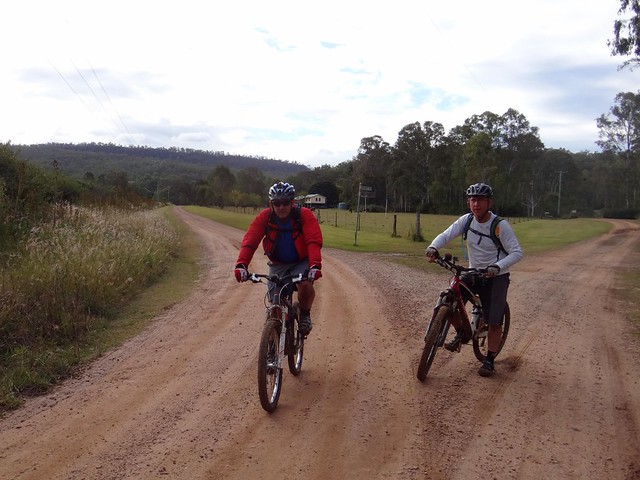 We eventually reached the BNT on Stevens Road and enjoyed a few precarious downhills on the homeward run towards Withcott.

It might look like a quiet country lane, but this trail is an important route stretching from Cooktown to Melbourne down the great dividing range. I often wonder who has recently passed by on their way north or south. 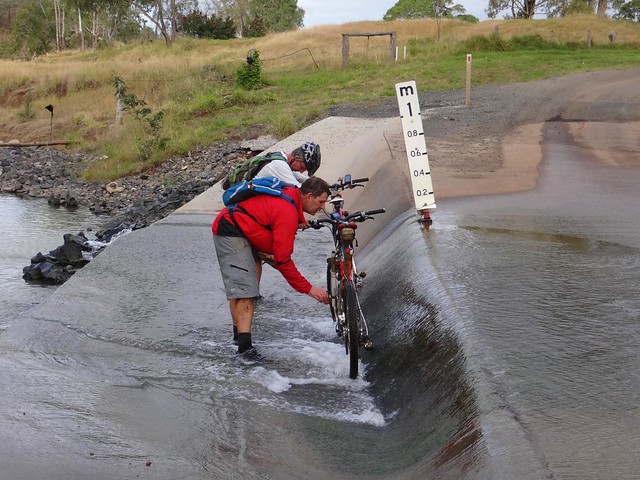 Before finally arriving in Withcott, we washed the mud off the bikes in a flooded causeway. Eric seemed surprised when I joined in because it meant getting my feet wet.

A word of warning though – the mud makes it very difficult after wet weather. The climbs would be difficult in summer. This is probably a ride you’d want to try in the drier, cooler weather of early spring.

Thanks Eric, Jaime and Paul for yet another fun adventure!

One Reply to “Toowoomba”