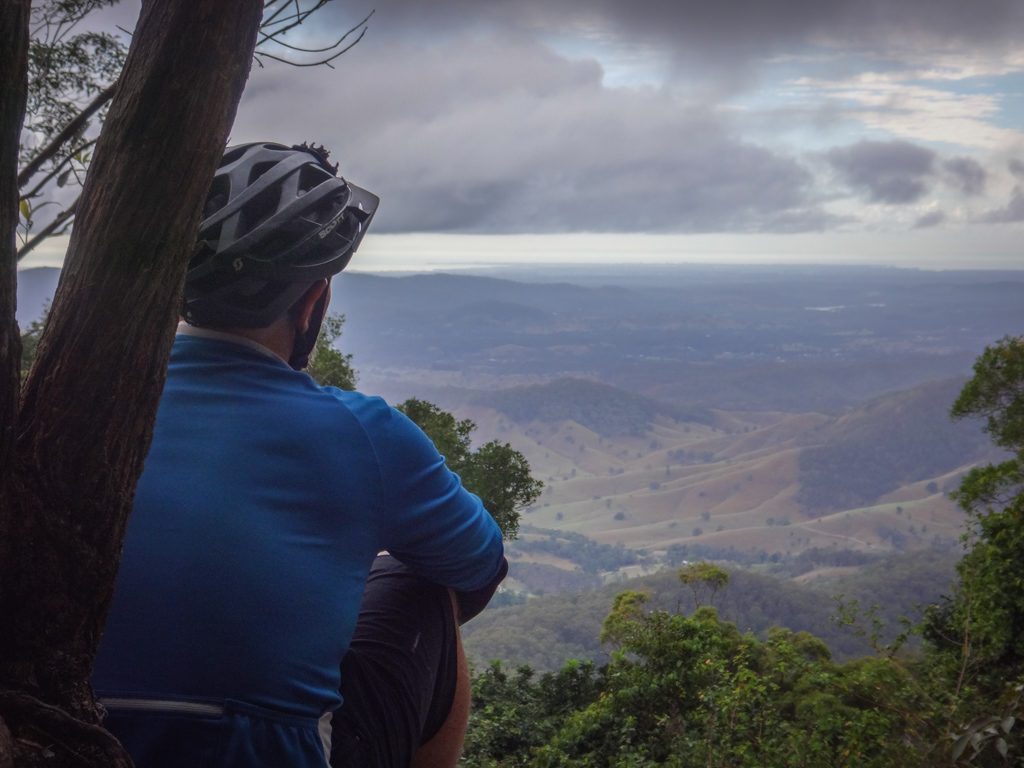 My friend Paul once told me about an old trail which ran from the highest point in the D’Aguilar Range down to the Lacey’s Creek valley, losing over 700 metres in altitude over almost twenty kilometres.  He called it “The Lemon Tree Track”.  Today we thought we should check it out.

Only a few days before the winter solstice, we arrived at Lacey’s creek as the sun rose over foggy fields and dew-soaked grass.

Winter in Queensland is perfect weather for long strenuous rides. 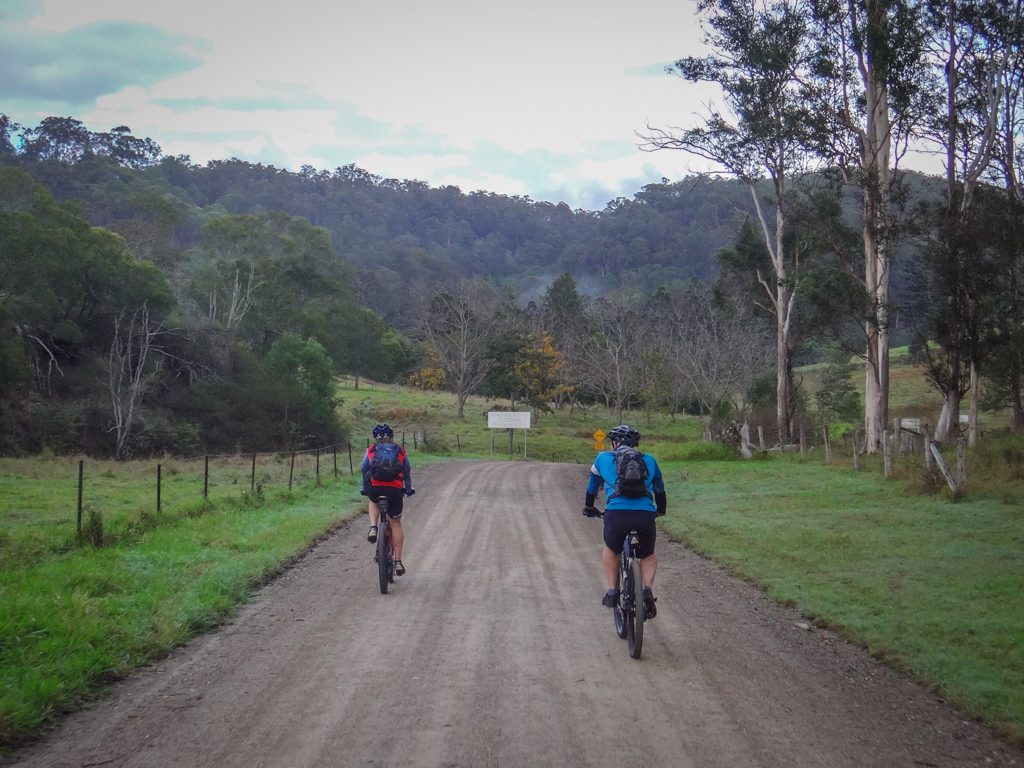 We started our ride at Wirth Road and headed up into the range. 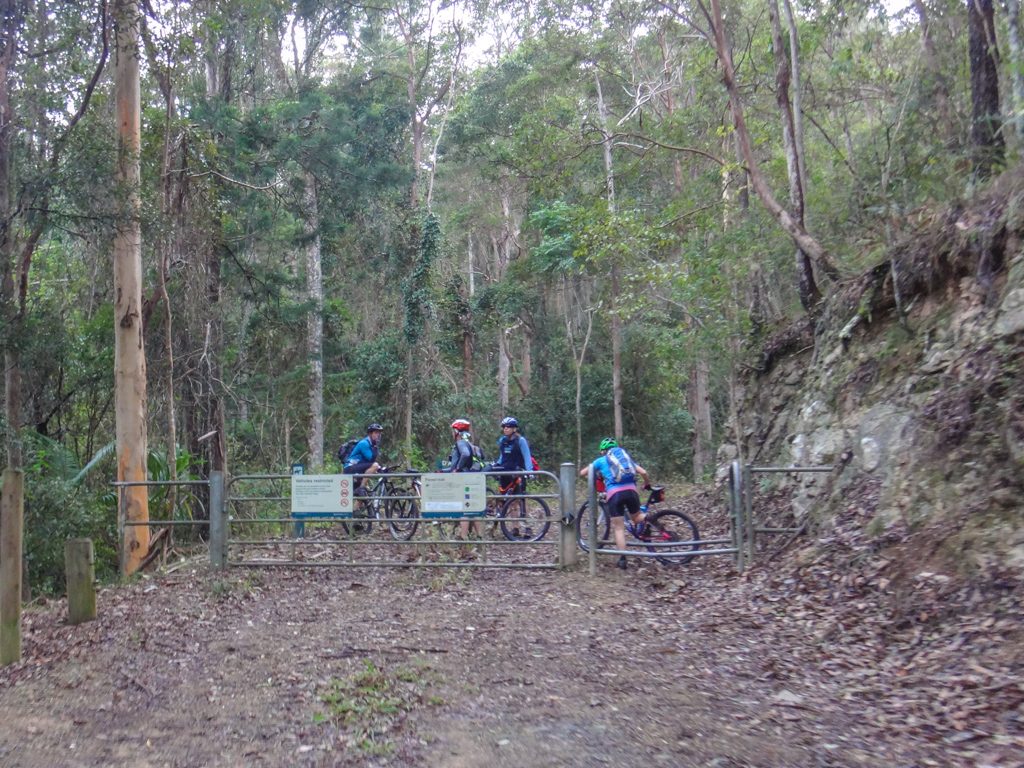 At the national park boundary, the gradient grew steeper.  Apart from three short descents, we would be riding uphill for about thirty kilometres.  I was grateful for the cool weather. 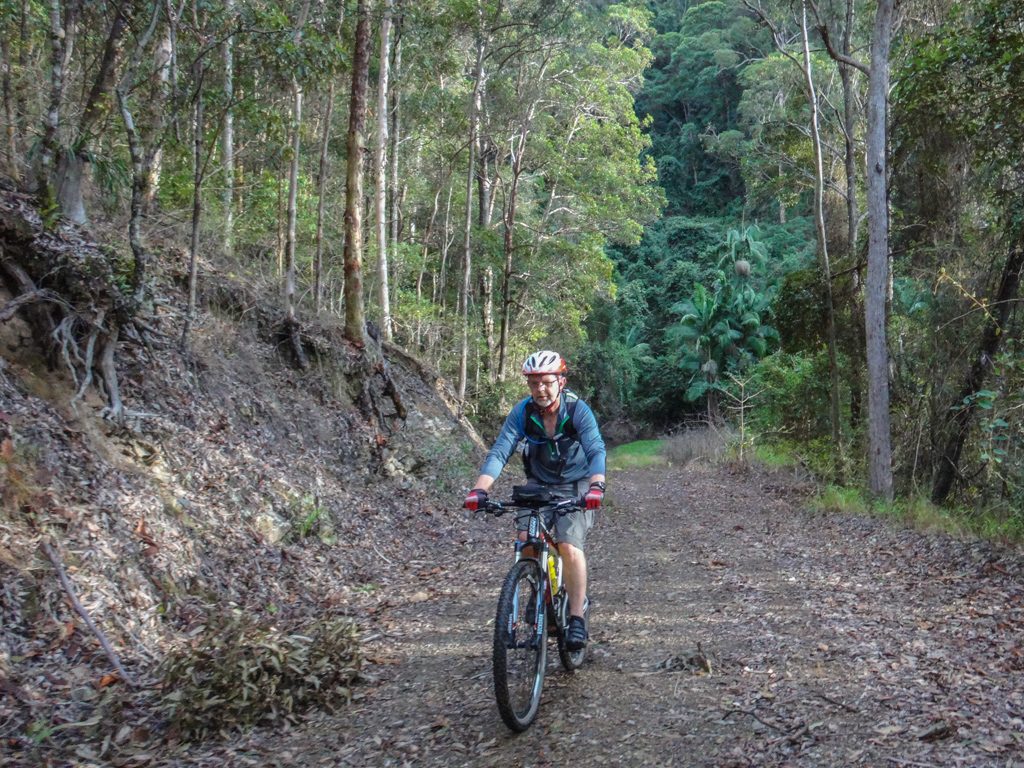 Hills are sometimes solitary affairs on a bike.  Everyone climbs at their own pace – minds wondering while our legs do all the work. 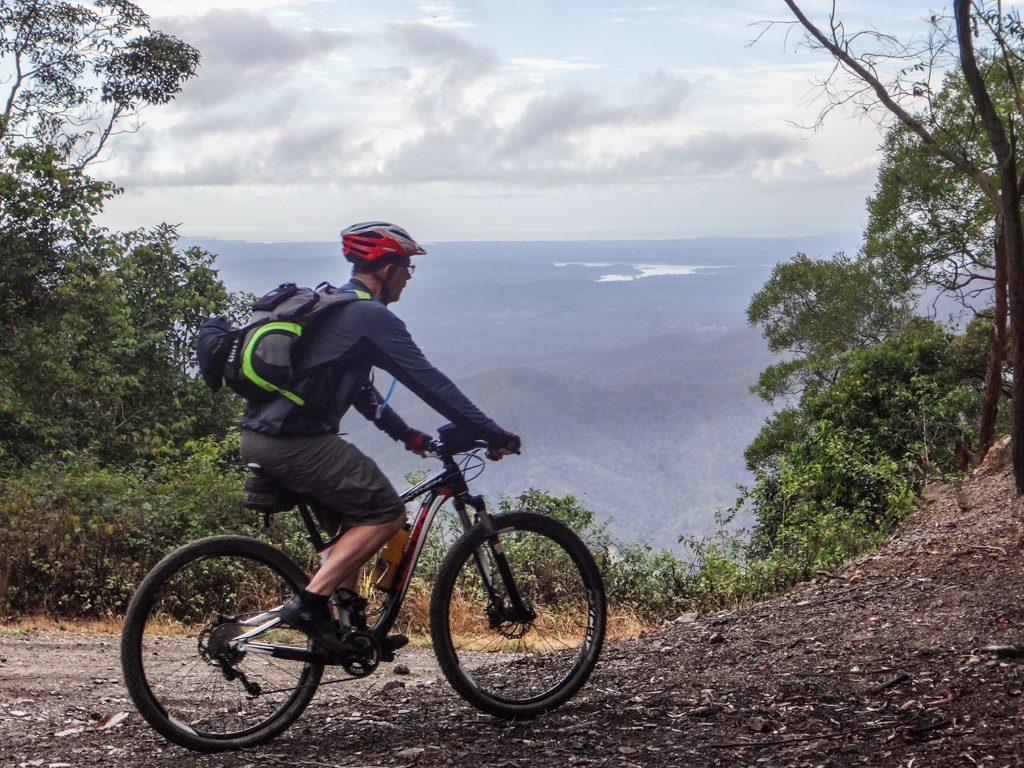 After over an hour of climbing we reached Kluvers lookout and enjoyed a short break. 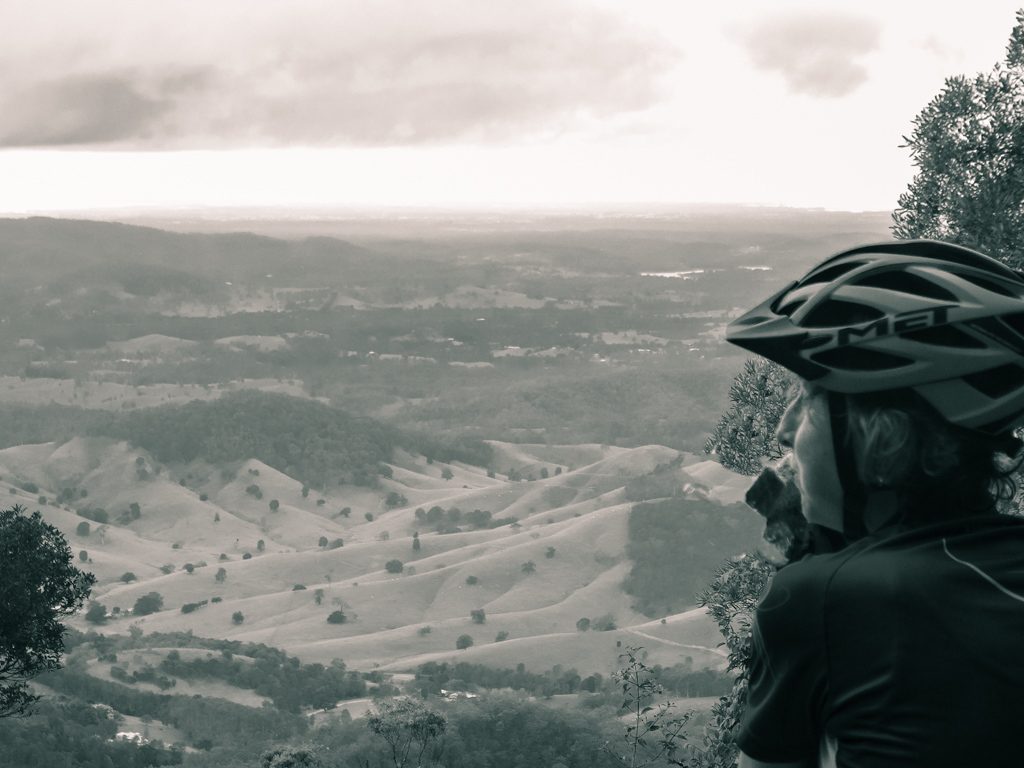 Below us, Laceys Creek meandered away to our left, while further back the North Pine River twisted into Lake Samsonvale.  Behind that Moreton Bay and its islands twinkled in the distance.

It’s a wonderful spot to stop and enjoy the view – and easily reachable by 4WD, or even a normal 2WD car if you take things carefully. 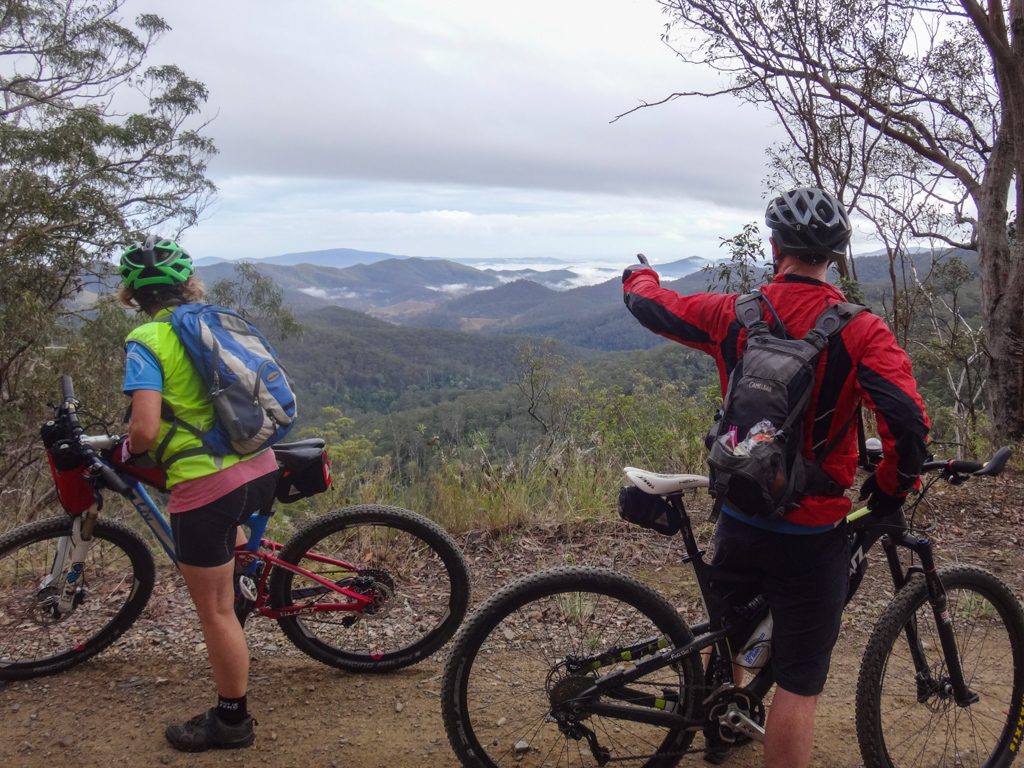 We left the lookout and continued north along the top of the D’Aguilar Range.  This time we had great views to the west over Reedy Creek where we had ridden a couple of weeks ago.  Patches of fog still lingered in some of the valleys where the winter sun had yet to reach. 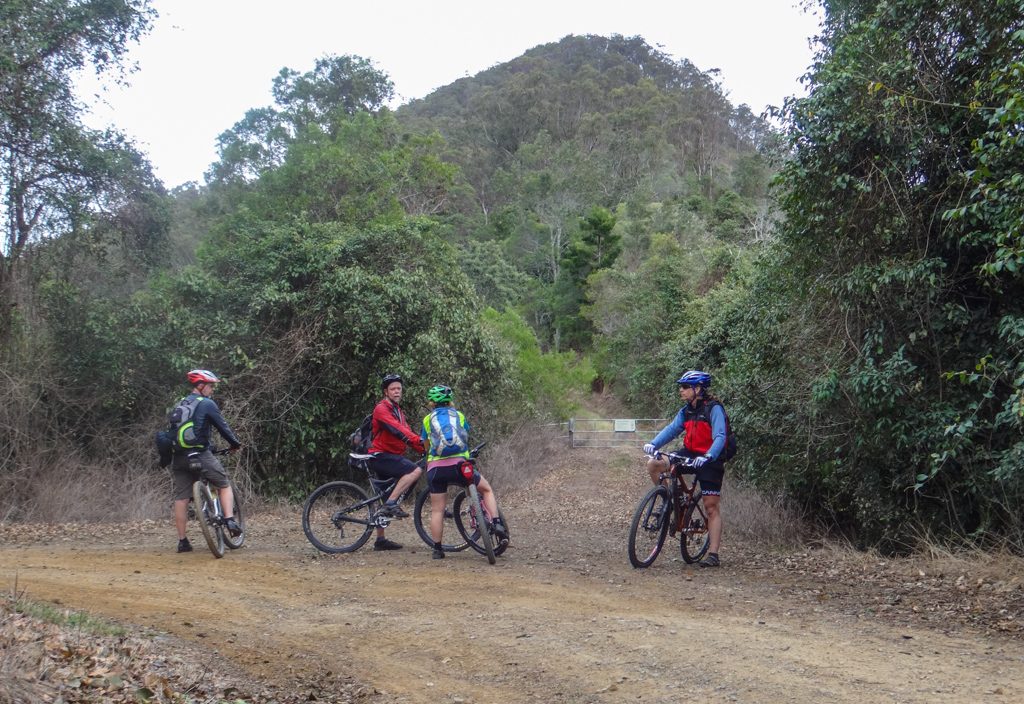 On previous rides, at this point we’d turn left and enjoy a long descent to Lacey’s Creek.  Today, however, we continued straight ahead: up the long hill,  towards Northbrook Parkway. 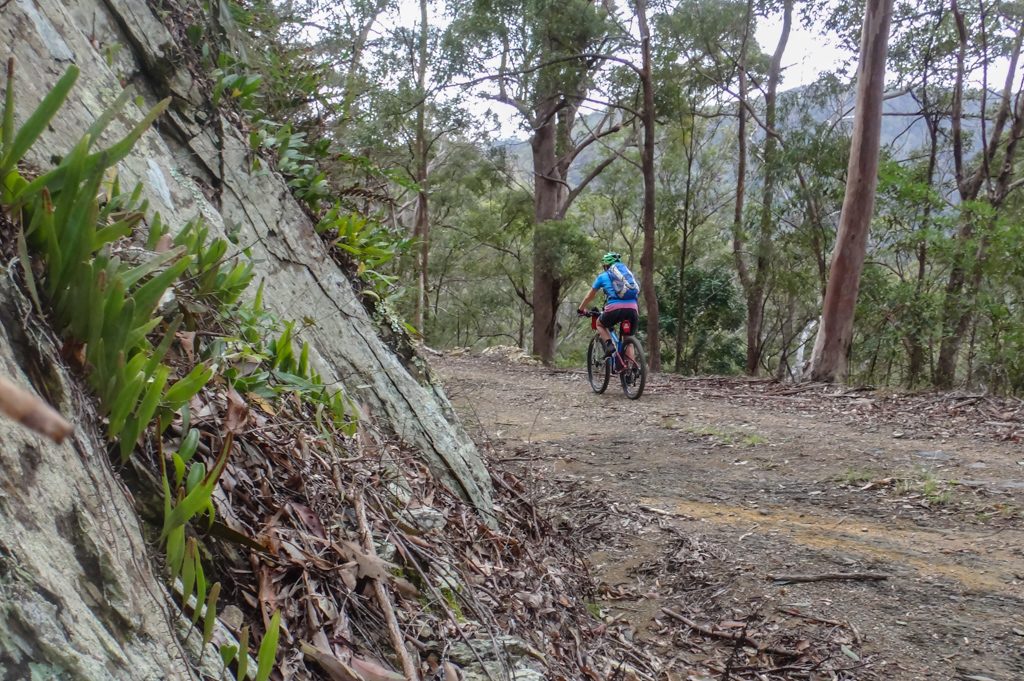 The constant climb clung to the edge of steep hillsides, snaking around impressive cliffs as we slowly made our way up. 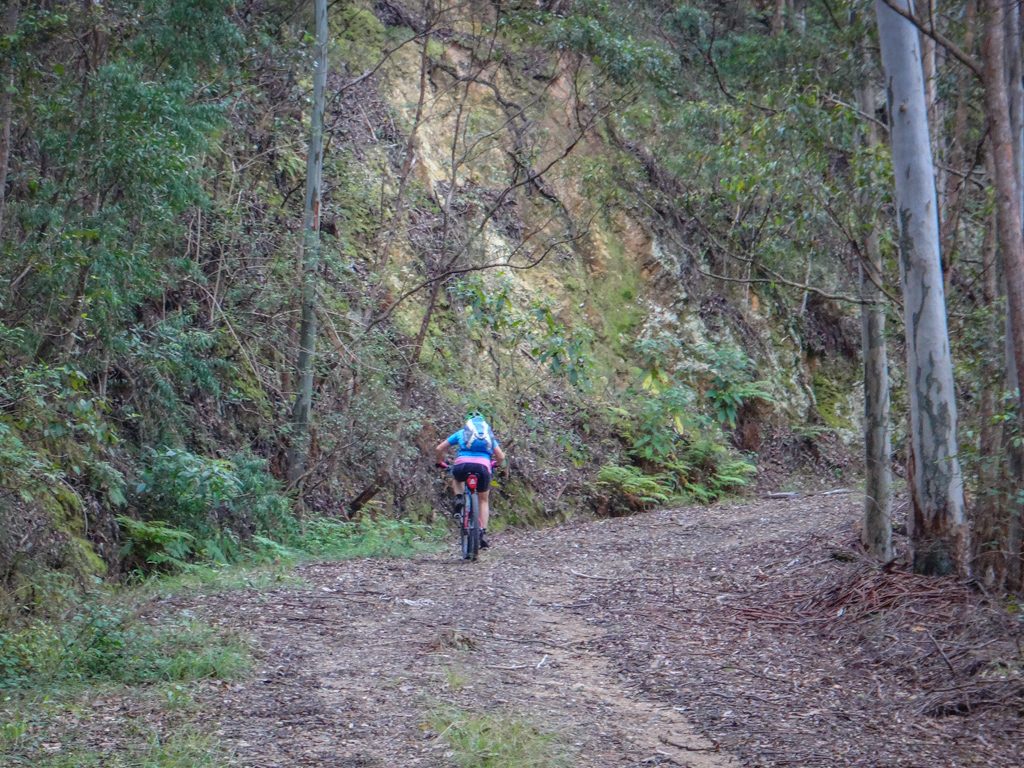 I dropped to the back of the pack, each of us climbing at our own pace. 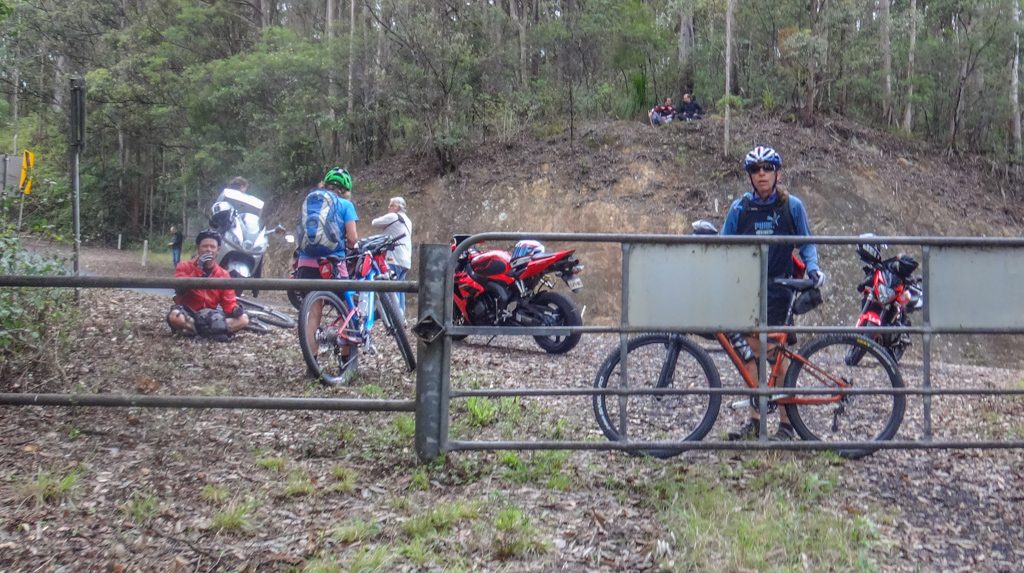 At the top of the climb we joined the main road, and said “G’day” to a bunch of motor cyclists taking a break by the side of the road.

It seemed strange to rest beside such a busy road after spending the last three hours in secluded bushland.

On the other side of the road a couple of bikers sat atop a hill looking down at us.  I had seen them ahead in the distance as I had climbed the last few hundred metres of the track.

We joked about engines, or the lack thereof.  Secretly I’m sure they were glad they were riding motorbikes.  And we were glad we weren’t. 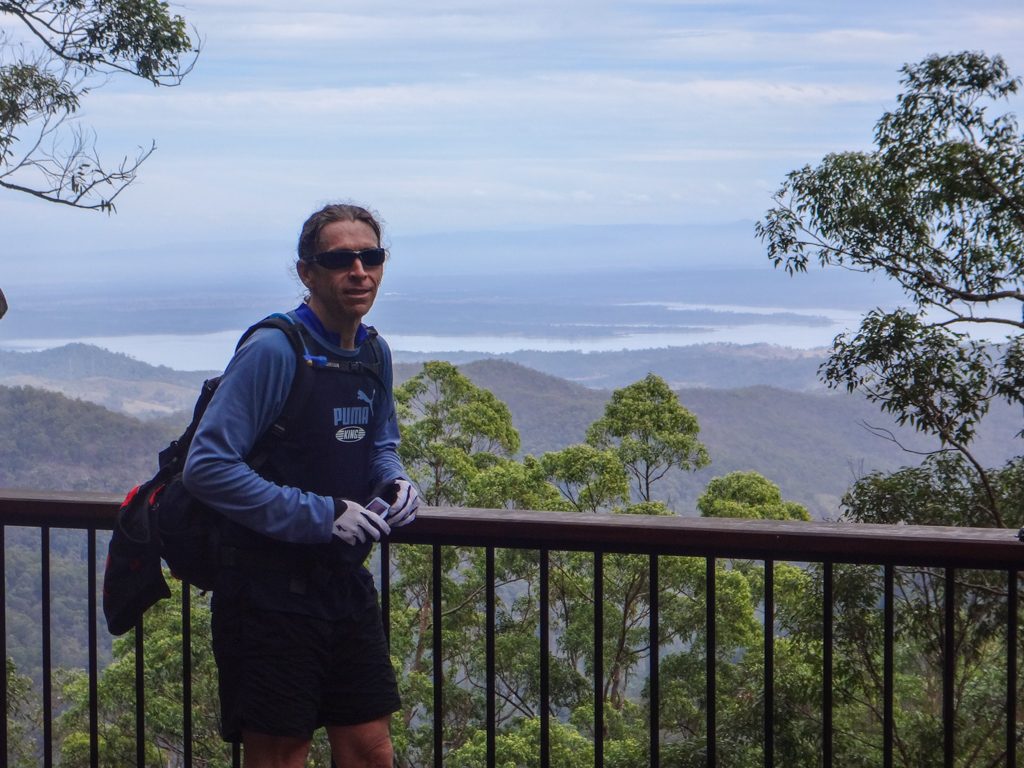 We stopped for a quick lunch and soaked up the panorama:  the forest-clad hills of Dundas below us, the expanse of Lake Wivenhoe behind it, and the seemingly endless wall of the Great Dividing Range behind that.  So far this morning we had been fortunate to have such an exciting mix of landscapes. 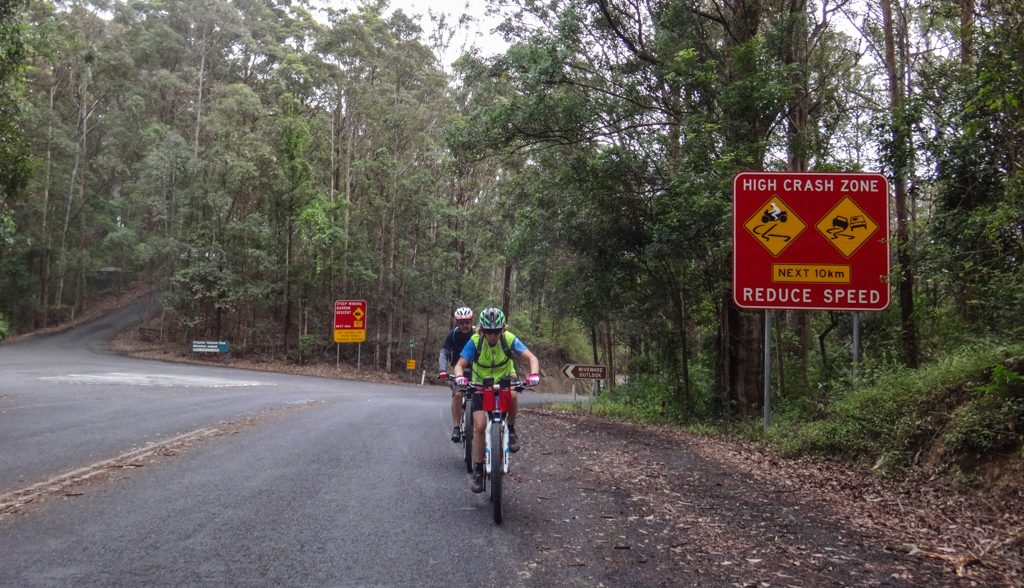 After the lookout we had to ride up Northbrook Parkway for about three kilometres.  It’s steep and twisty, but the cars gave us plenty of room. 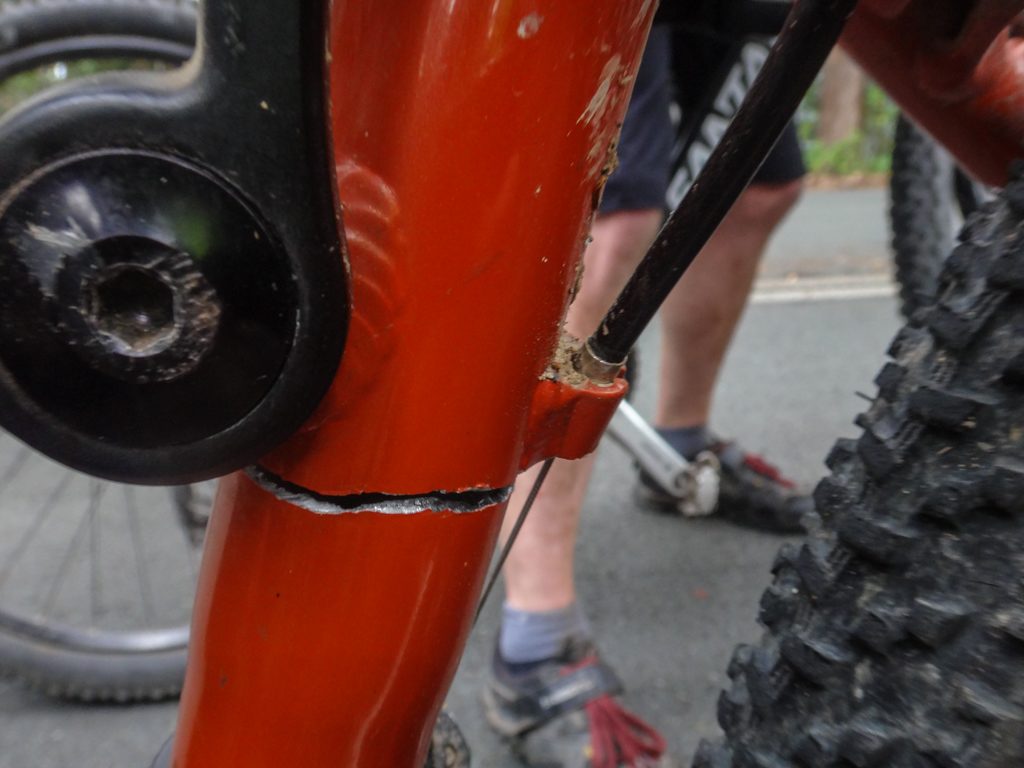 Dean had said to me: “Every time I push down on my seat, a lot of iron filings fall from my bike.”

I thought nothing of it until he called out for us to stop riding.

His frame had broken in two on the lower part of his seat tube.  He’d been riding with this fracture for the last hour or so.

“I thought something was wrong because it wasn’t steering properly,” he said.

We suggested Dean cut the ride short and roll gently down the paved road to Samford.  But Dean would have none of that.  His rear-suspension swing-arms held the frame together, and he chose to ride with us down the bumpy track despite the broken frame. 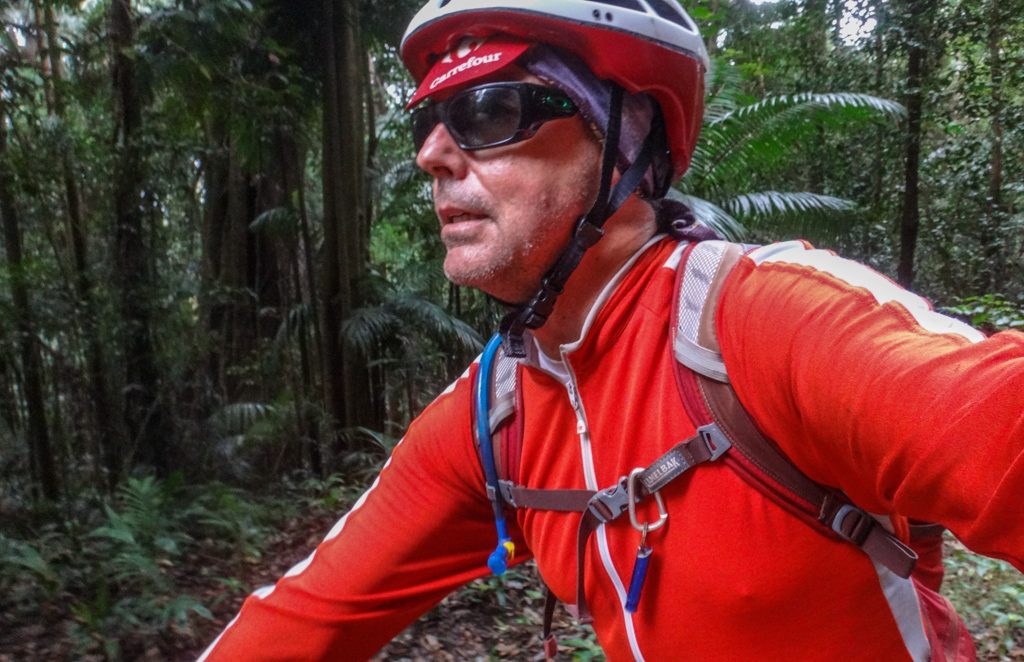 Shortly after that we left the paved road and joined the Lepidozamia Track.  We’ve enjoyed this wonderful trail many times as it drops off the range down to Kobble Creek.

We’d be following this track for a short time until we reached the “Lemon Tree” track.

Till then we enjoyed the lush rainforest.

This point of the D’Aguilar Range is over 750 metres above sea level.  A couple of hundred metres away, the barely noticeable peak of Mount Tenison Woods marks the highest point in the range at over 770 metres.

It was a long way down. 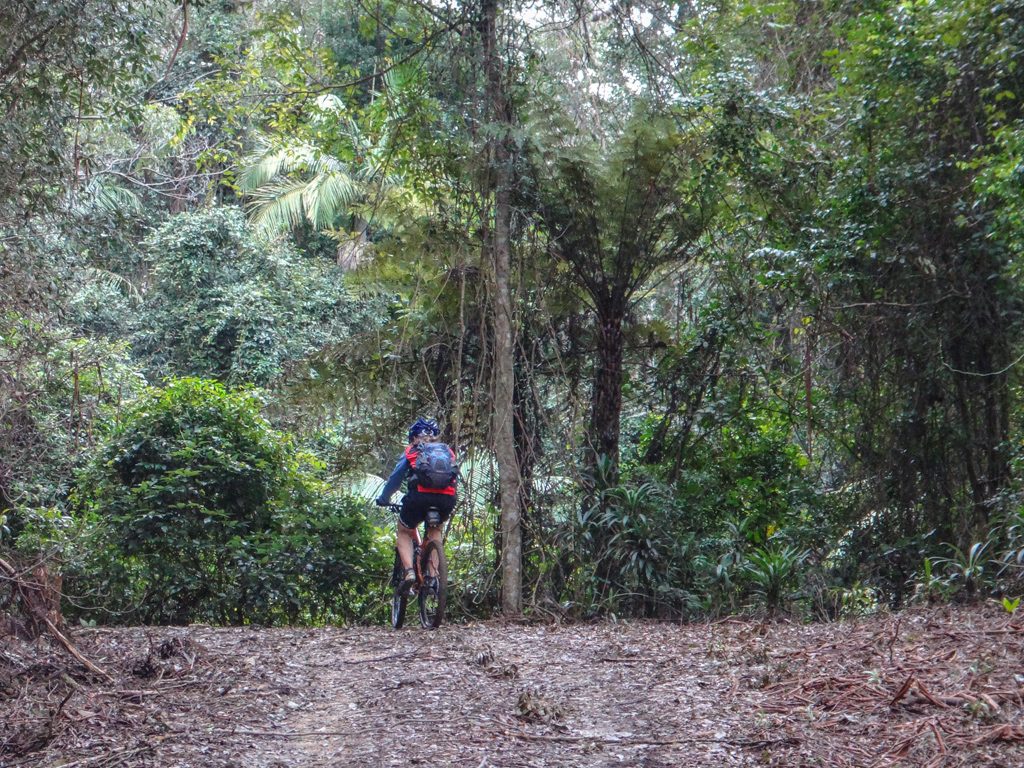 Dean gingerly pushed his bike along the track.

“Keep your bum out of the saddle,” I suggested – worried about the crack in his frame. 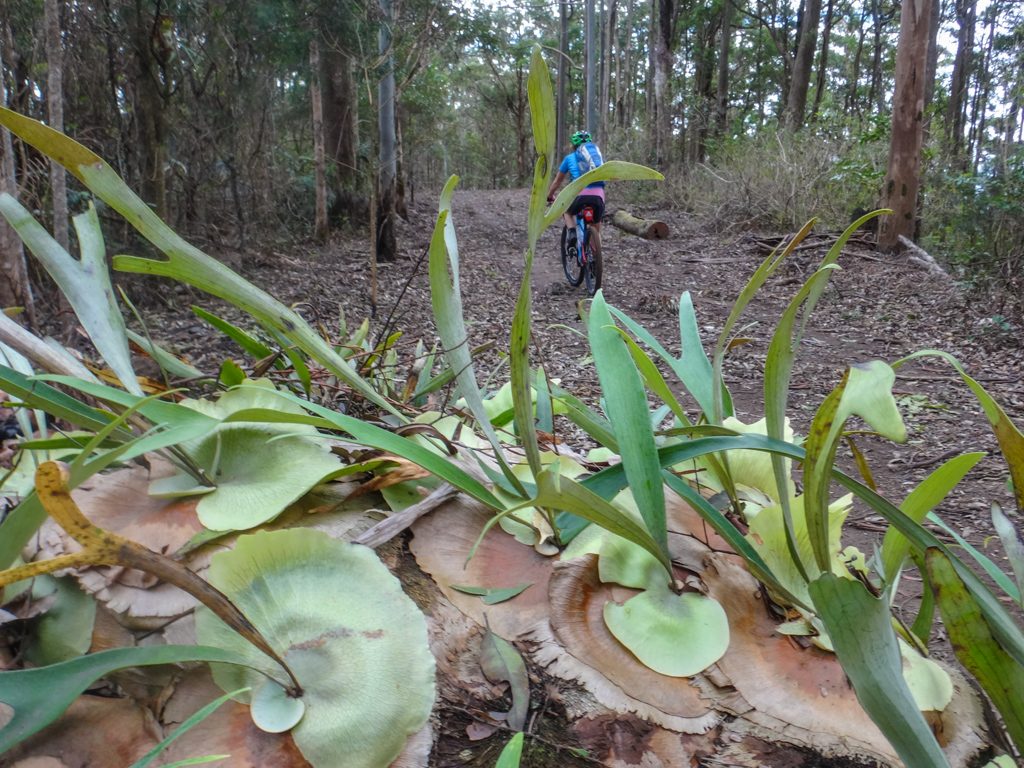 Recent storms had brought down trees and branches.  We got an unusually close look at this Epiphyte that had been knocked out of a tree. 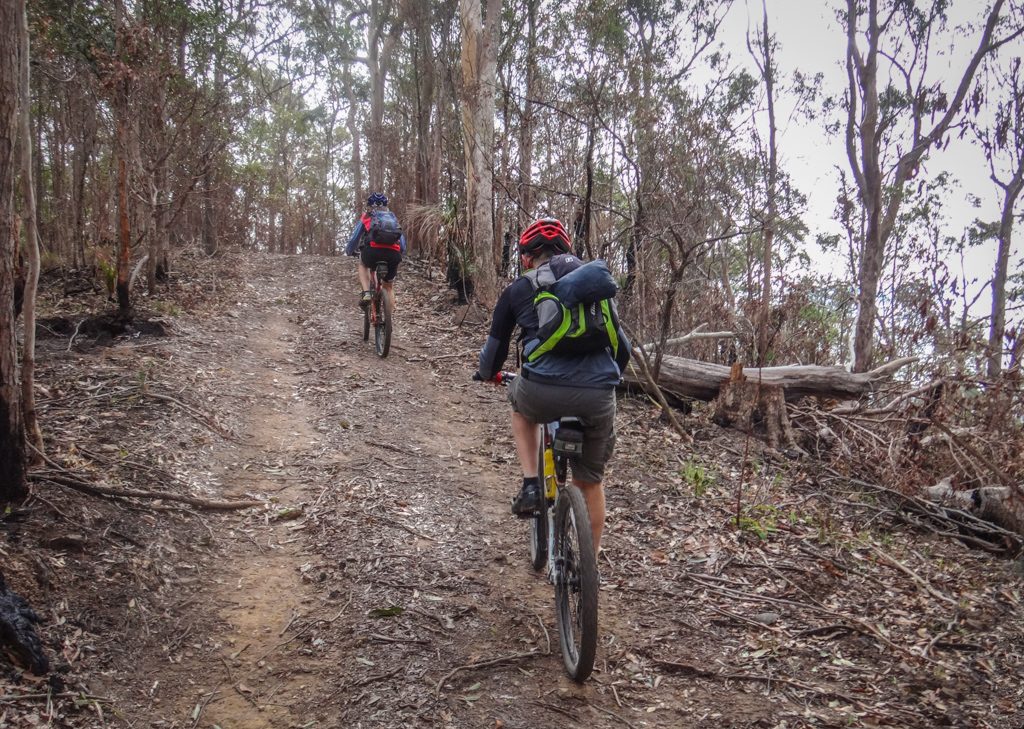 Eventually we the familiar Kobble Creek trail, and turned left into the “Lemon Tree Track”.

The track names are confusing.

In the past, when we’ve ridden down to Kobble Creek, the track we followed was known as “The Lepidozamia Track”.  I’ve since learned that its official name was “North Kobble Break”.

The track we were now following was once known as “The Lemon Tree Track” but now had the official name of “Lepidozamia Road”.

What’s in a name?  This was a new trail – we were excited to see where it went. 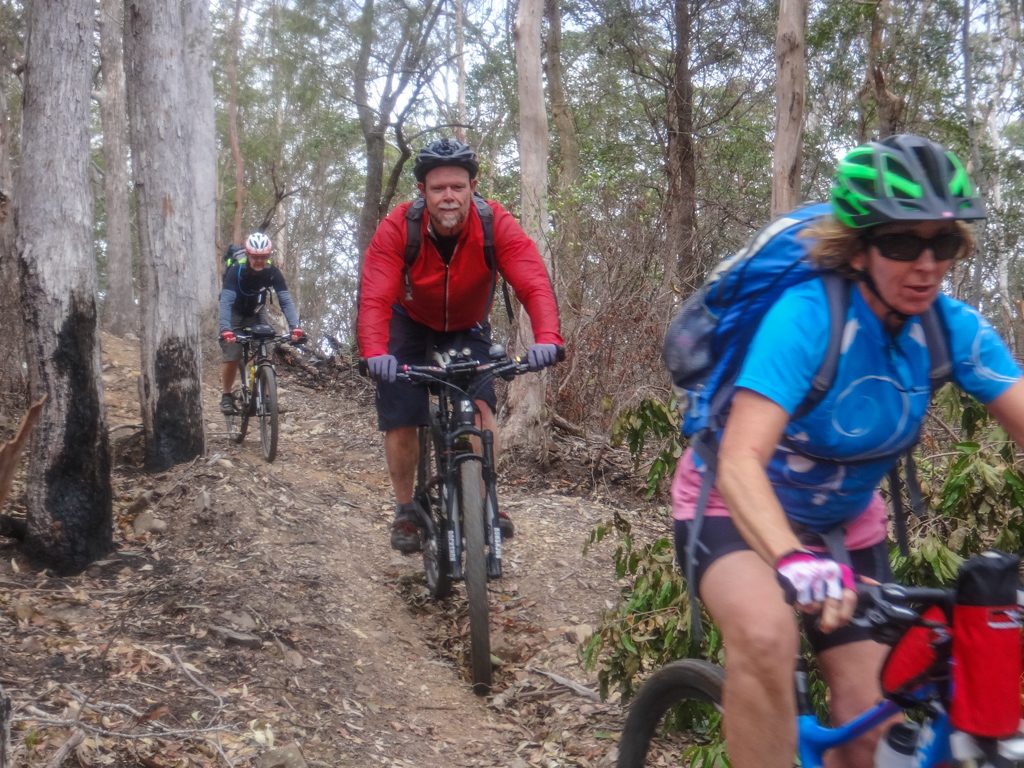 Eventually the track pointed downwards, but not too steeply.

We relaxed, moved our weight backwards and gently modulated the brakes to control our descent.

It was a long way down. 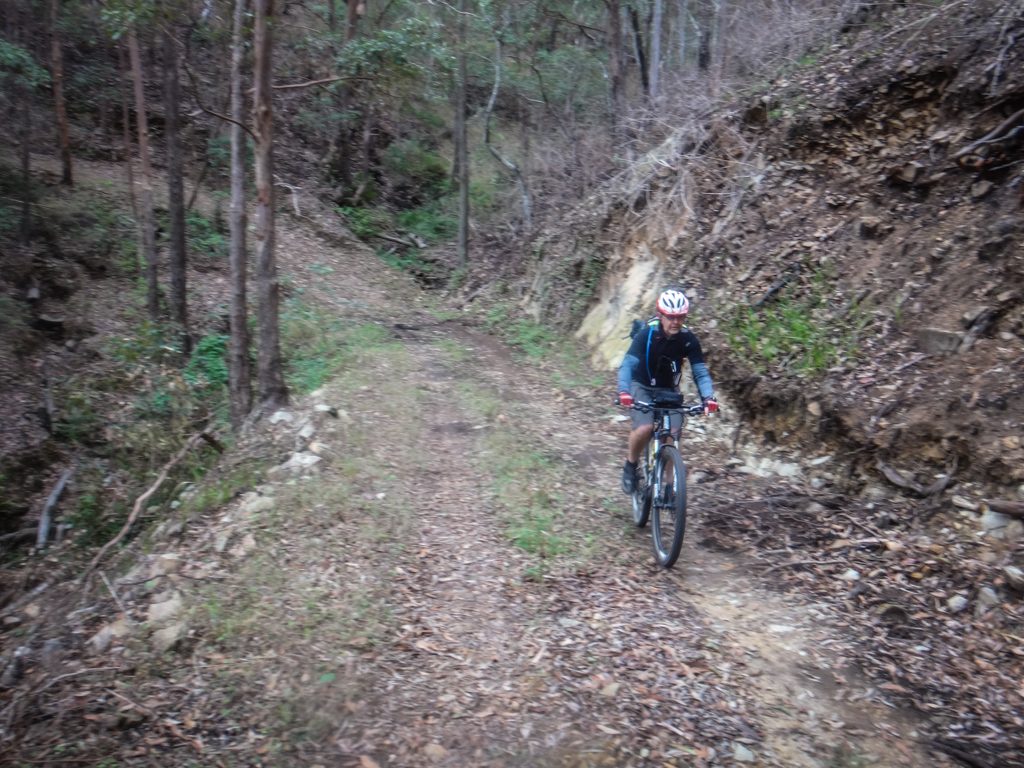 Eventually we left the national park and I grew confused.

The Raynbird Creek road reserve led to our left down a hill.  But it was plastered with “No Tresspassing” signs, and warnings about security cameras.

Another trail led straight ahead but it wasn’t on the road reserve.

We decided to obey the sign and go straight ahead along the well-maintained track, even though we were no longer on the road reserve. 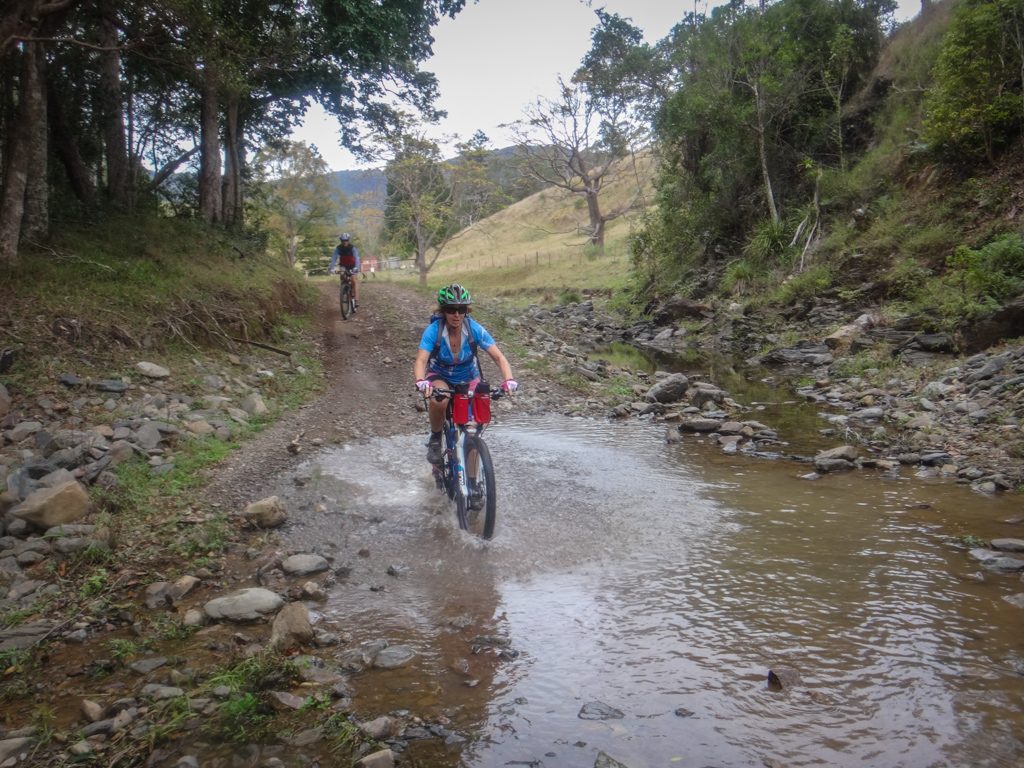 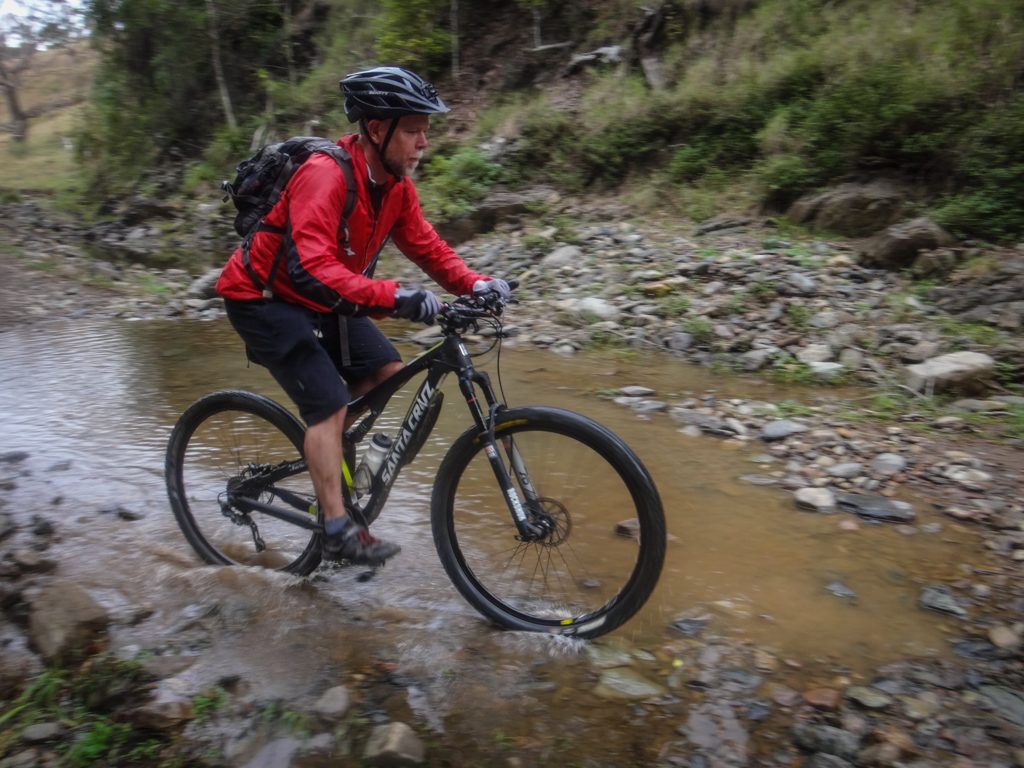 As my friends rode ahead, a friendly farmer pulled alongside me in her 4WD and told me that we really should not have come down the road we’d just emerged from.

I apologised, telling her about the confusing signs in the forest.

She explained that there was no real track on the road reserve, and so there was no way to pass through here from the national park without crossing private land.

So… if you plan on doing this ride in future, you won’t be able to follow the Lemon Tree Track – it crosses private land. 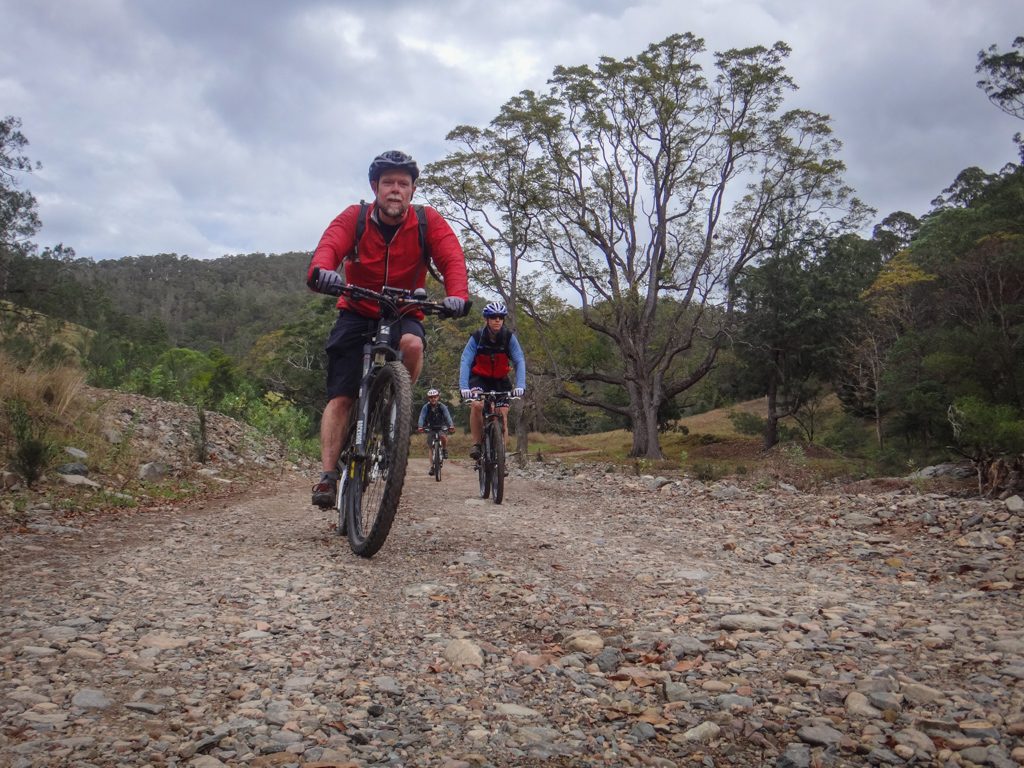 We followed the Raynbird Creek valley northwards back to our starting point. 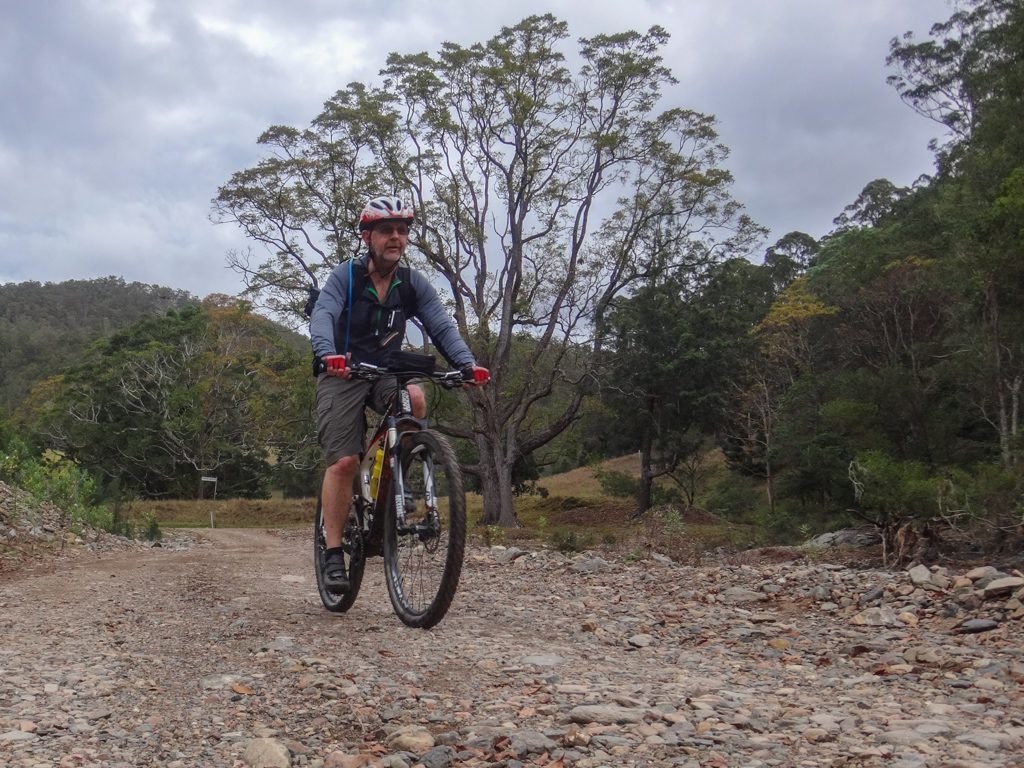 The D’Aguilar Range has numerous hidden valleys like this one.  Creeks twist up into the range carving out secret pockets that would be hard to find unless you knew about them:  Reedy Creek, Byron Creek, Banks Creek, Branch Creek, Bellbird Grove, Gold Creek, Cedar Creek.  There are dozens of them.  We’ve explored many of them.  Today we added another one to the list. 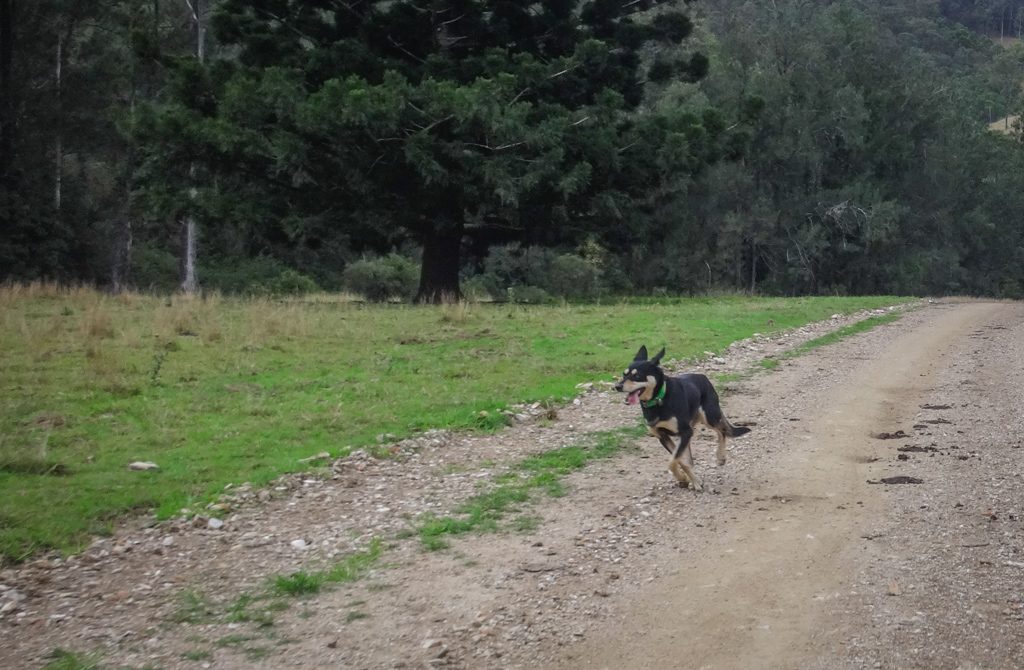 A happy cattle dog followed me for a few kilometres.

She seemed grateful for the exercise, even though she had no chance of rounding me up.

We rode 46 kilometres in six and a half hours including breaks.

During that time we climbed almost 1,800 metres in vertical ascent, and I burned almost 4,000 kcal.

This was a big ride, made easier by the gentle temperatures. There are some long climbs which would be much harder in summer.

Thanks Kaye, Russel, Jason and Dean for another memorable ride. 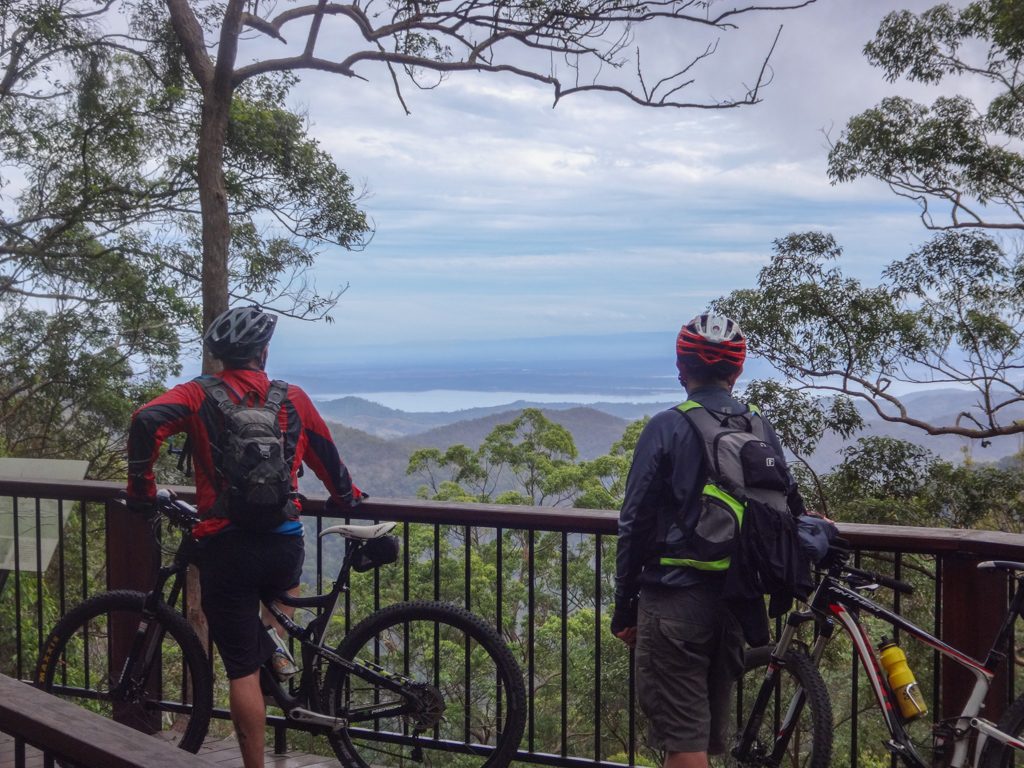