On Friday afternoon I was getting that familiar feeling of panic – I wanted to do a big ride, but didn’t know where to go. So I thought I’d be lazy and messaged my friend Darb “I don’t know where to ride tomorrow, have you got any ideas?”

“How about ….” I replied back detaiiling an wildly epic ride through D’Aguilar National Park taking in over 100km of tracks.

Rather than indulge my wild-eyed enthusiasm for such an ambitious ride on the first day of summer (the last few days have been very hot and very humid), Darb decided to give me a dose of common sense, and we eventually settled on a slightly shorter but just as tough ride to Gold Creek Reservoir. 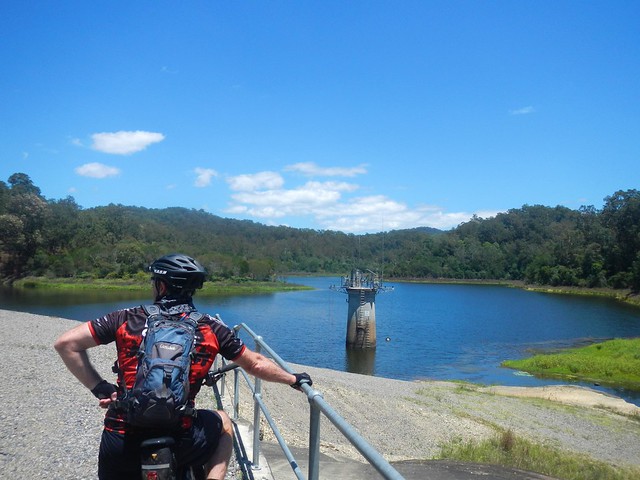 Gold Creek has an interesting history. It was an important boundary for the Turrbal aboriginal people. It marked the south-western edge of their country which stretched all the way from that point north-east to the North Pine River. Constance Campbell Petrie writes:

This tribe all spoke the same language, but, of course, was
divided up into different lots, who belonged some to North
Pine, some to Brisbane, and so on. These lots had their
own little boundaries. Though the land belonged to the whole
tribe, the head men often spoke of it as theirs. The tribe in
general owned the animals and birds on the ground, also roots
and nests, but certain men and women owned different
fruit or flower-trees and shrubs. For instance, a man could
own a bon-yi (Araucaria Bidwilli) tree, and a woman a minti
(Banksia amula), dulandella (Persoonia Sp.), midyim (Myrtus
tenuifolia), or dakkabin (Xanthorrhcea aborea) tree. Then
a man sometimes owned a portion of the river which was a
good fishing spot, and no one else could fish there without
his permission.

In 1846, Tom Petrie passed through this area as a 14 year old boy on his way from the penal colony at Brisbane to Wivenhoe Station in the Brisbane Valley. What a long way to walk!

In the 1860’s, a small amount of alluvial gold was discovered in the creek (which is how it got its name).

In the 1880’s, the growing town of Brisbane needed more water. While nearby Enoggera Reservoir was able to supply water to many parts of Brisbane, it wasn’t able to get water to many of the higher locations around Brisbane because it was too low – and without a pump water can’t run uphill. A dam was built on Gold Creek at a point about 100m above sea level. This was higher than most places in towm, and so a gravity-fed pipeline was able to supply the water needs of the more elevated homes in town, 20km away. 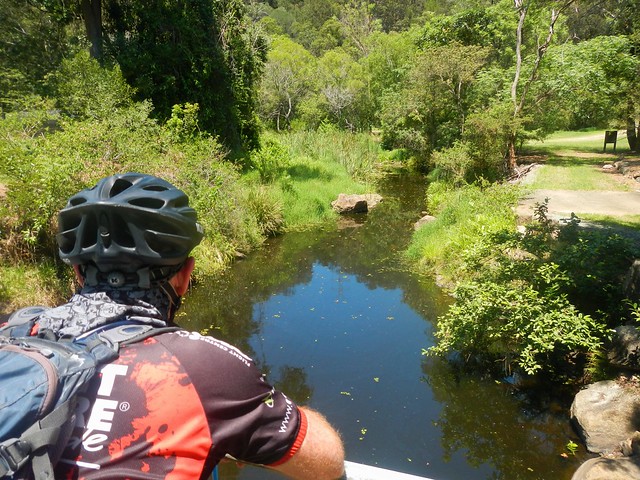 Today Darb and I thought we’d set ourselves a challenge, and ride from home to Gold Creek and back. We rode through Bunyaville, and then up to the top of “Ironbark” in Samford Forest. From there we slowly ground our way to the summit of Camp Mountain (up the short side), then rode down (and up) Centre Road in D’Aguilar National Park. Eventually we followed Gold Creek Road off South Boundary Road, down to the reservoir.

The only problem was, as it was the first day of summer, I ran out of water by the time we got to the reservoir. I was carrying 3 litres on my back, and 800ml of sports drink on the bike, but that wasn’t enough in the hot humid weather. Thankfully we were able to fully top up at an old house with a water tank near the reservoir. Just to be on the safe side I dropped a couple of micropur water purifying tablets into the water. It was fine. 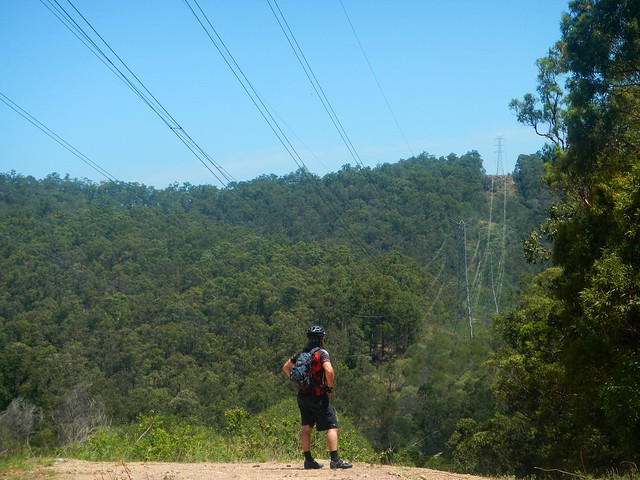 We slowly rode back up Gold Creek Road, down (and up) Centre Road, and back into the Camp Mountain part of the forest via Bellbird Grove. Darb showed me “Dive bomb” – a fun track which lets you zoom down some steep trails under the powerlines, shooting you out near Mount Nebo Road. Unfortunately we were going in the wrong direction and didn’t want to add yet another large climb into the trip, so we gave “Dive bomb” a miss today.

This ride had some long steep climbs, and by the end of it, we’d slogged out over 1,850m of vertical ascent. During the 76km ride I burned about 4,500 kcal. We took about seven and a half hours including breaks. On a hot day like today, I’m rating this one 9.5 out of 10 on the tough-o-meter. Consider topping up on water at the half way point, and you need lots (and lots) of energy snacks, plus copious quantities of sun-screen.