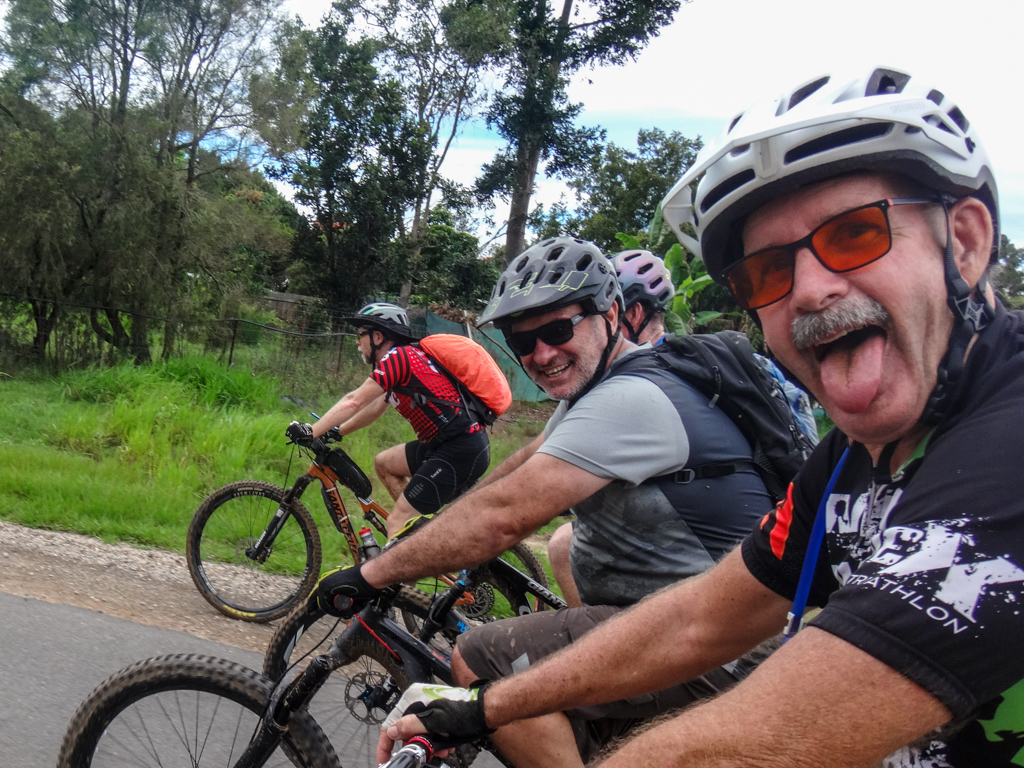 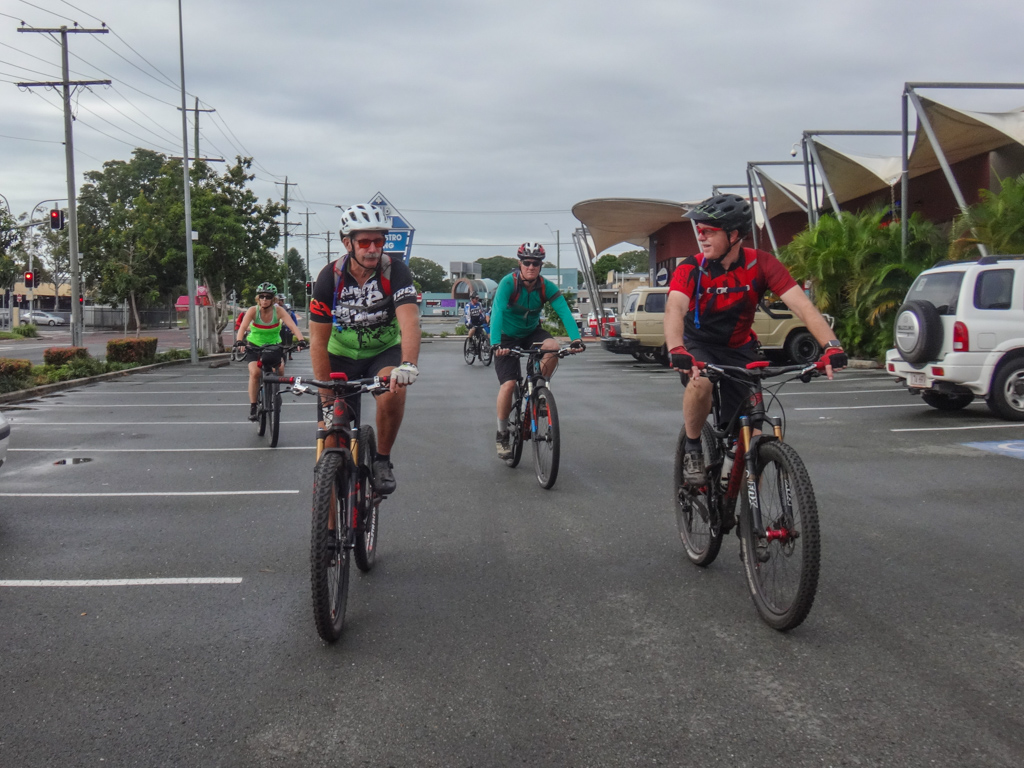 My friend Bangers organized a point to point ride from Caboolture to Mooloolah. Although a few of us had done this ride a month ago, we thought it would be fun to do it again with a larger group of people.

So we started our day with a leisurely snack and chat before slowly rolling away. 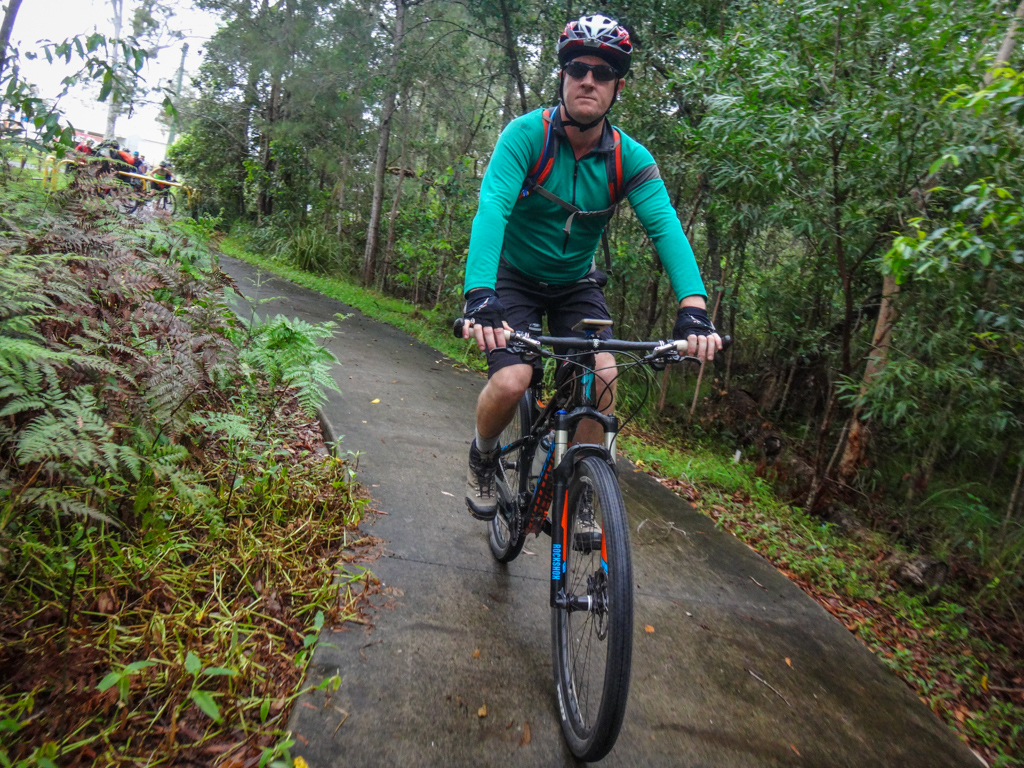 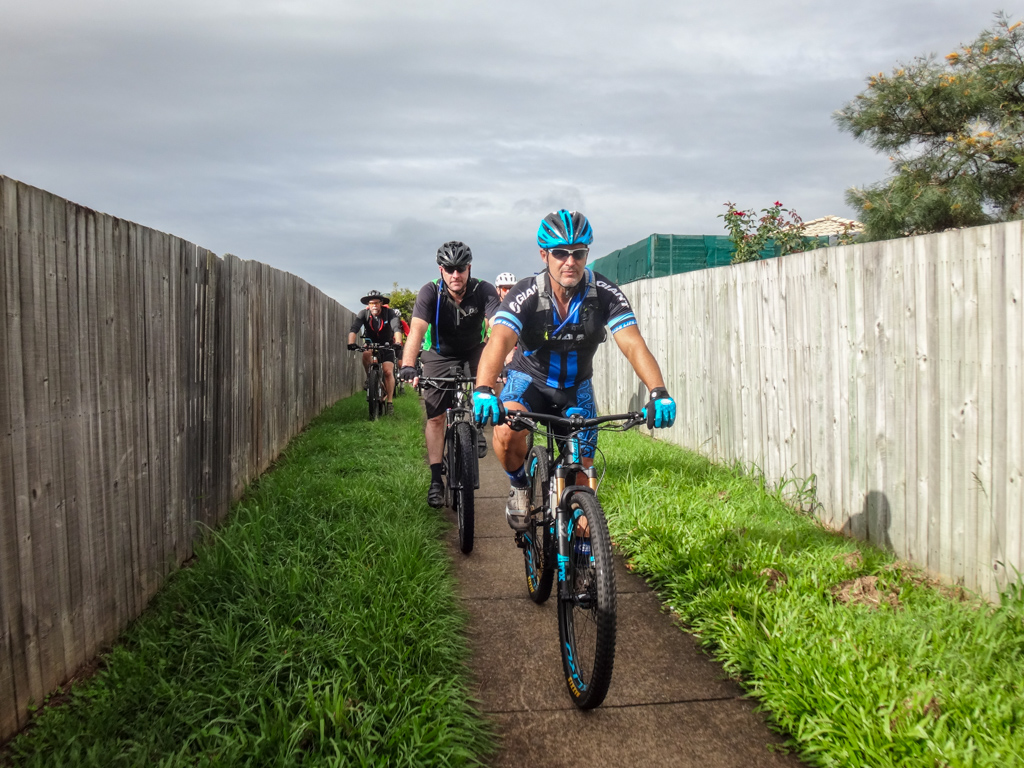 We started by following bike paths and quiet back streets out of Caboolture. 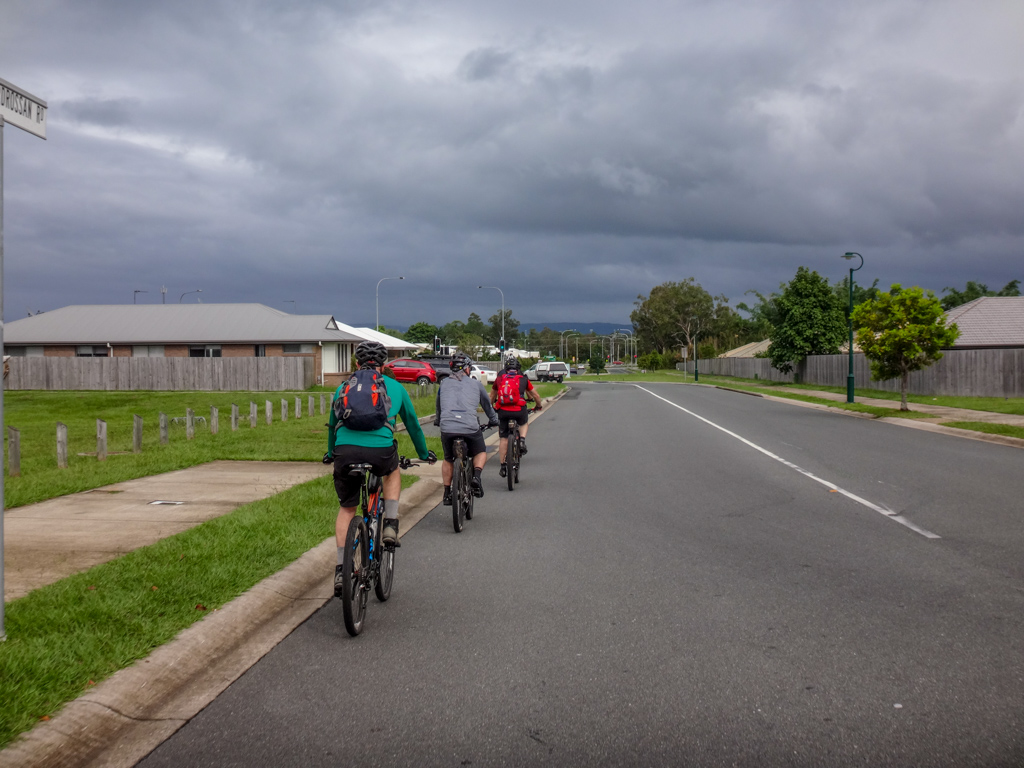 The forecast was for rain, but we’re optimists and defied the grey skies anyway.  None of us were made out of sugar – we were confident we’d be able to survive a bit of autumnal precipitation. 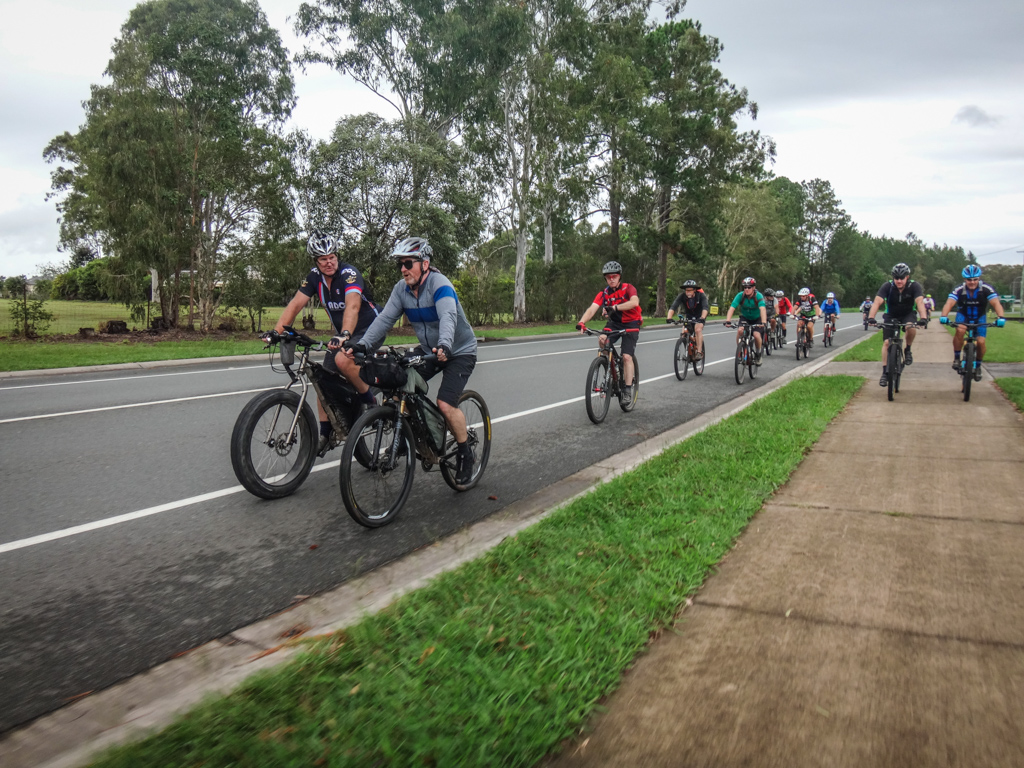 Our ragged peloton ended up on Pumicestone Road, riding east towards the pine forests. 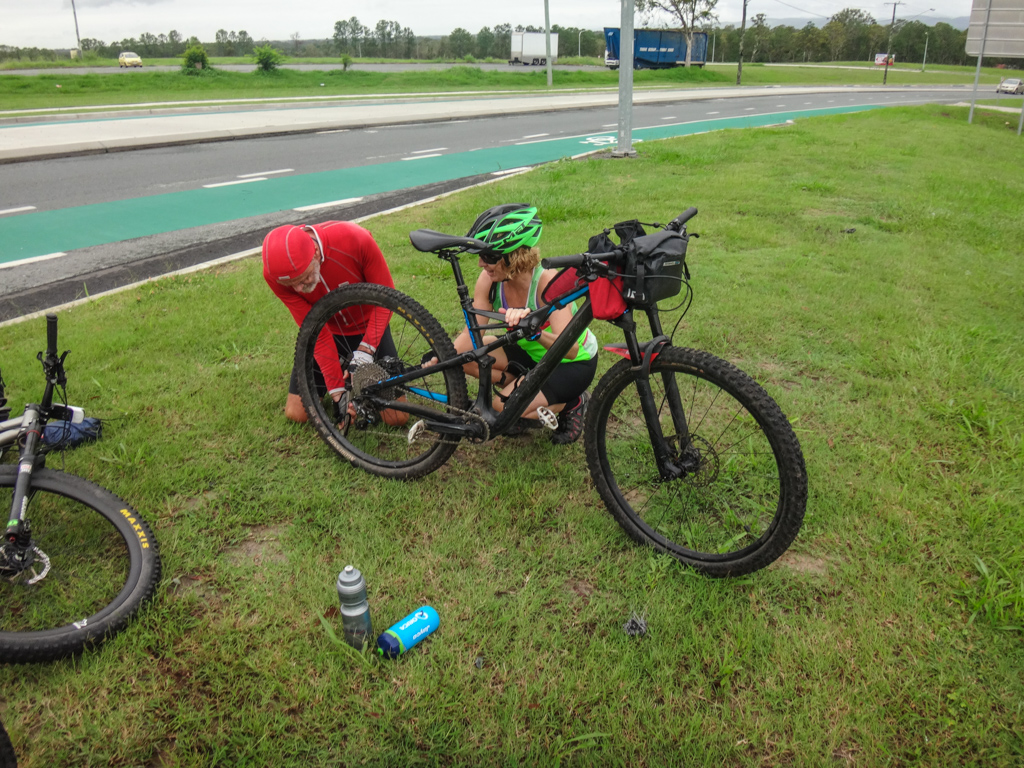 Kaye got a flat.

Calum helped her fix it. 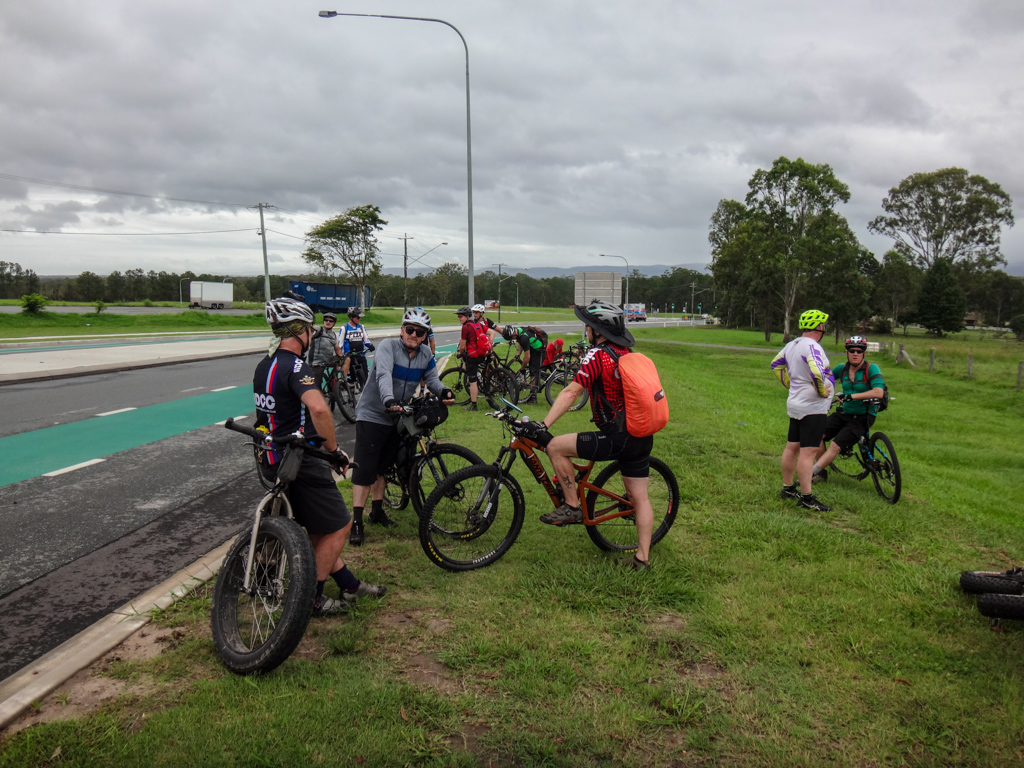 The rest of us had a break and continued our pre-ride discussions.

No one was in a hurry. 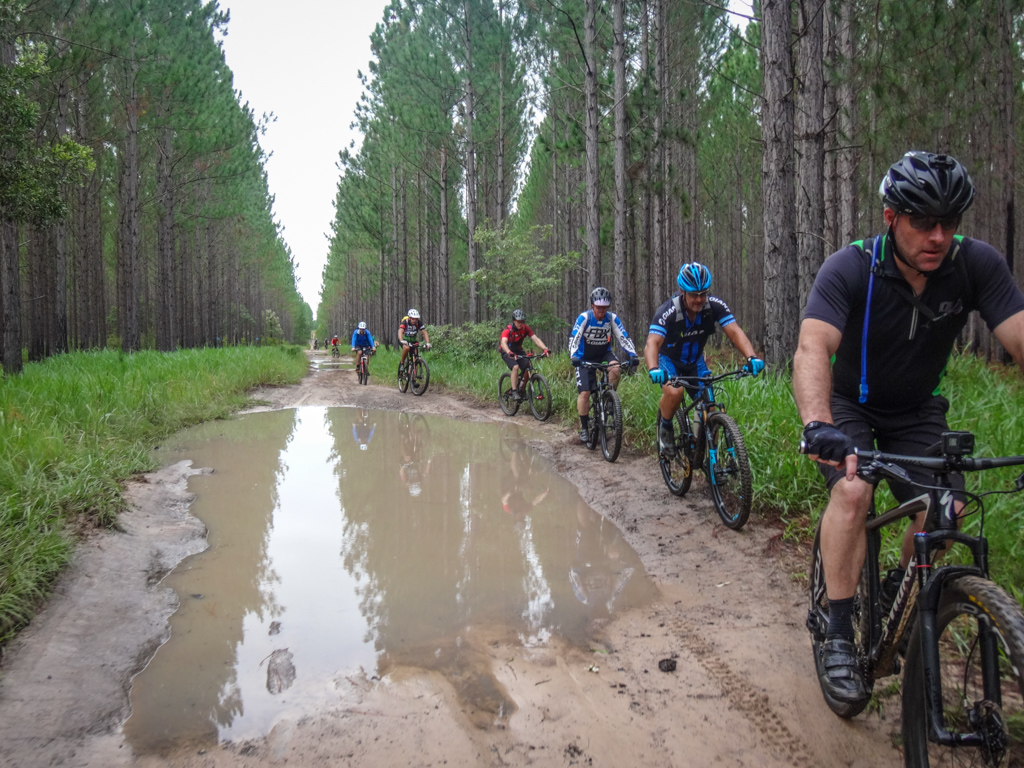 We left the roads behind and disappeared into the forest… 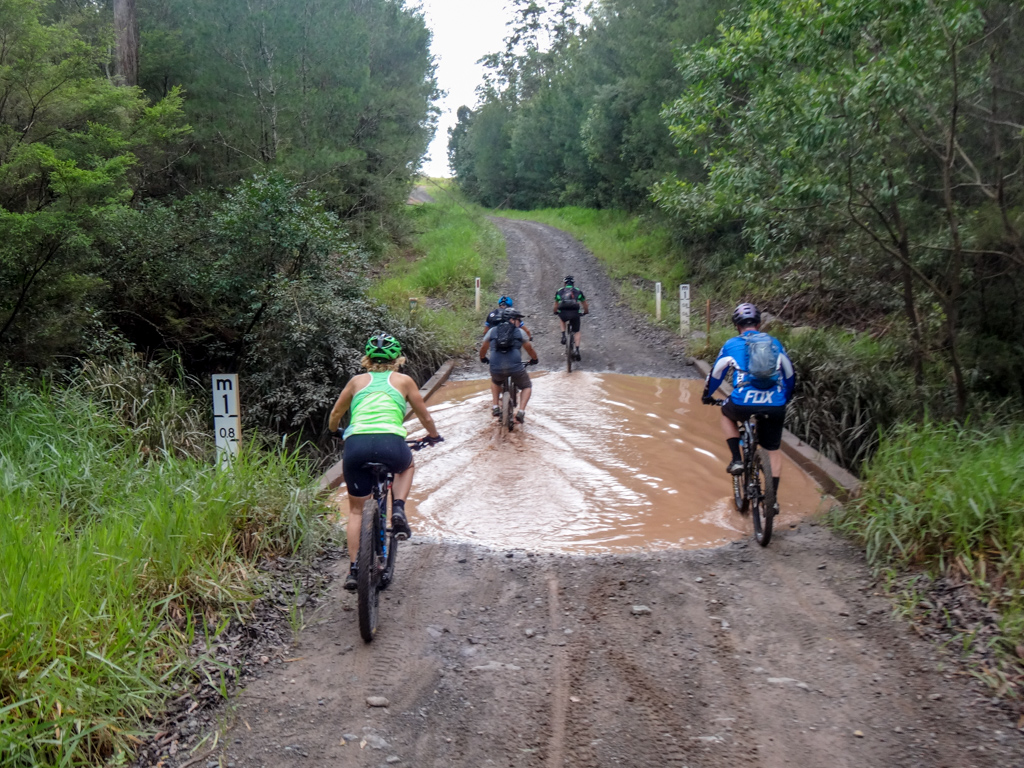 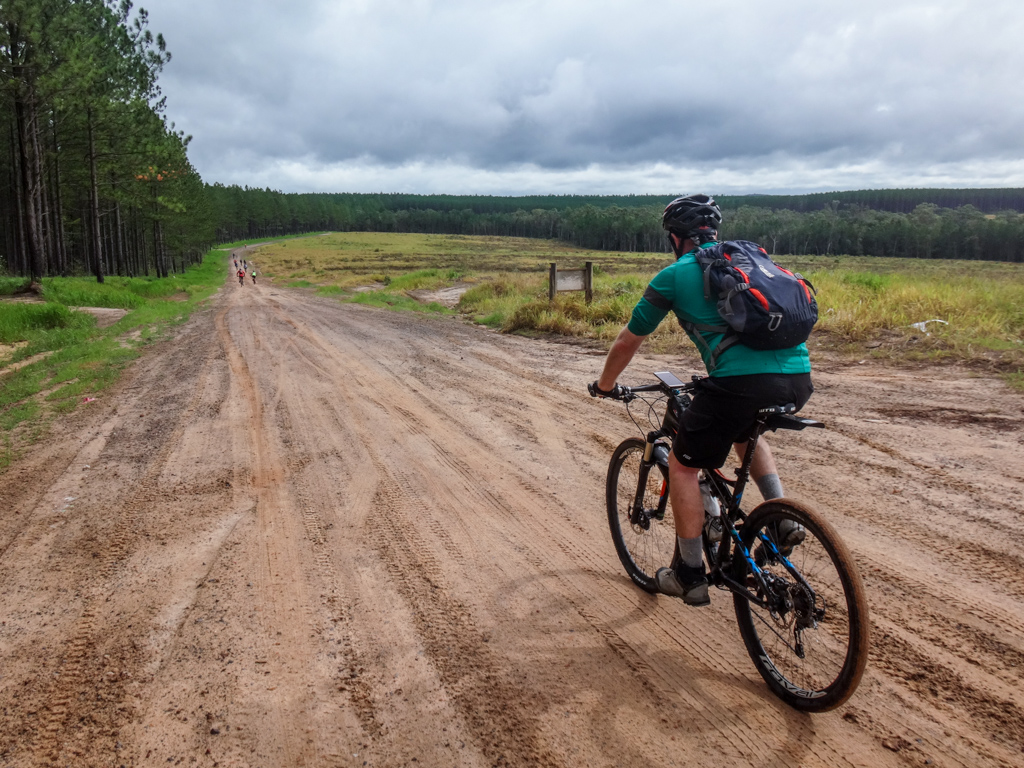 It was perfect riding weather.

The rain was staying away; clouds kept the sun away; a gentle breeze kept us cool

After an hour we stopped for a quick break.

No one seemed to mind me sticking the camera in their faces (much). 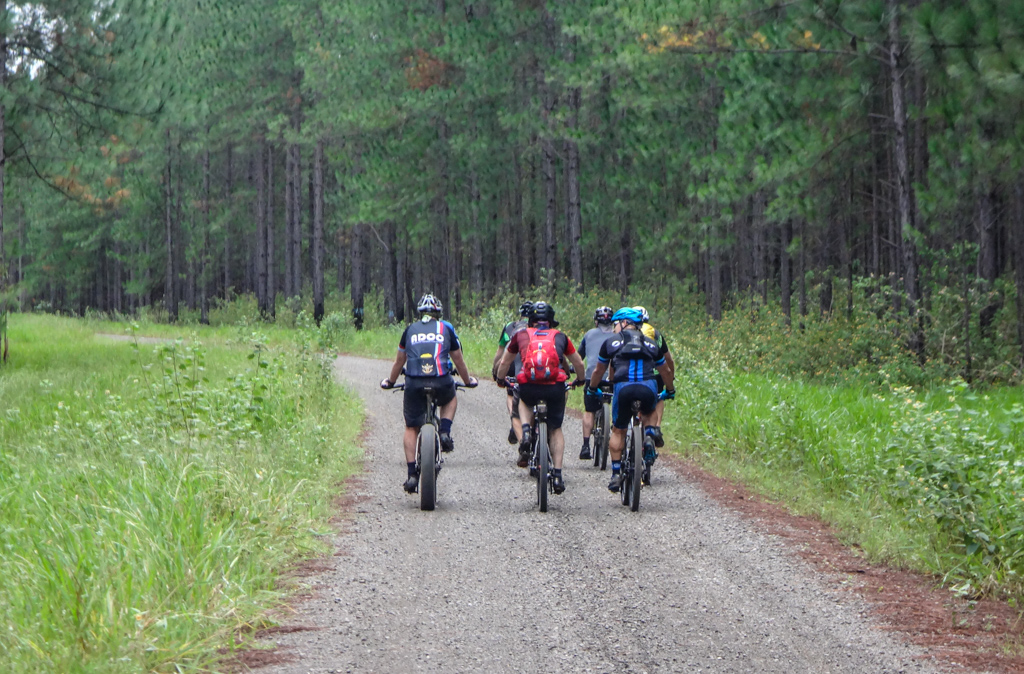 After five or ten minutes we continued northwards.

Some of the tracks were muddy.

Darb skidded off into the bushes and injured his knee.

Thankfully Tony was there to help him back up. 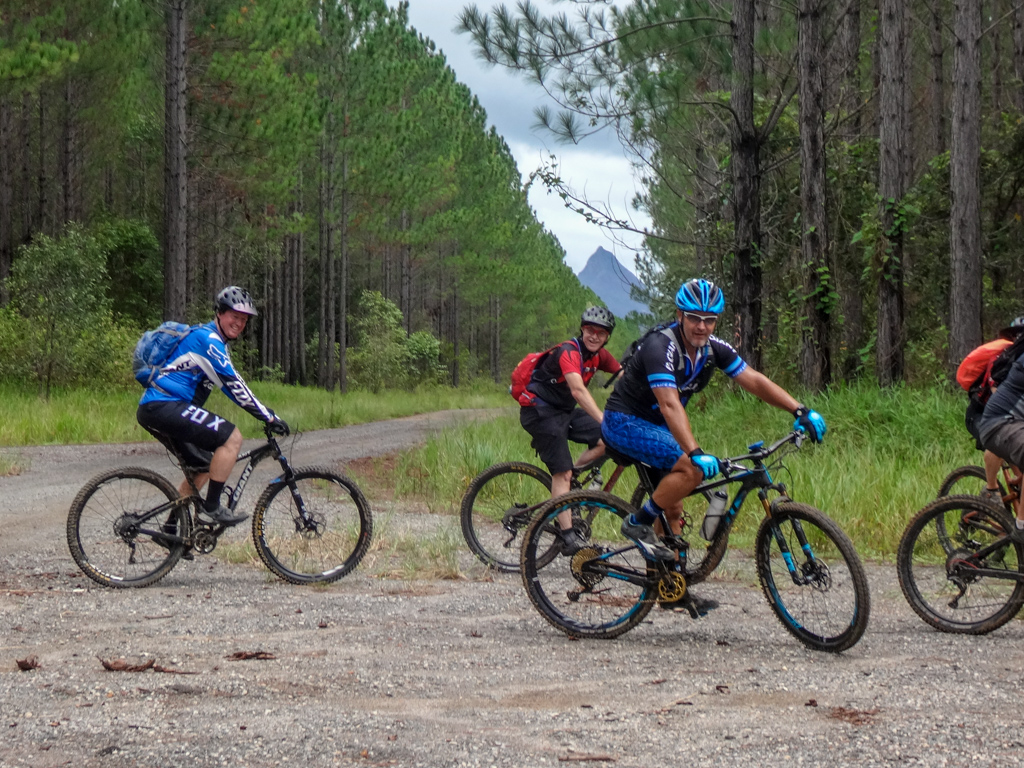 Darb decided to call it a day and head for the nearest railway station.

Simon and Adam rode with him to make sure he was ok.

The rest of us continued north. 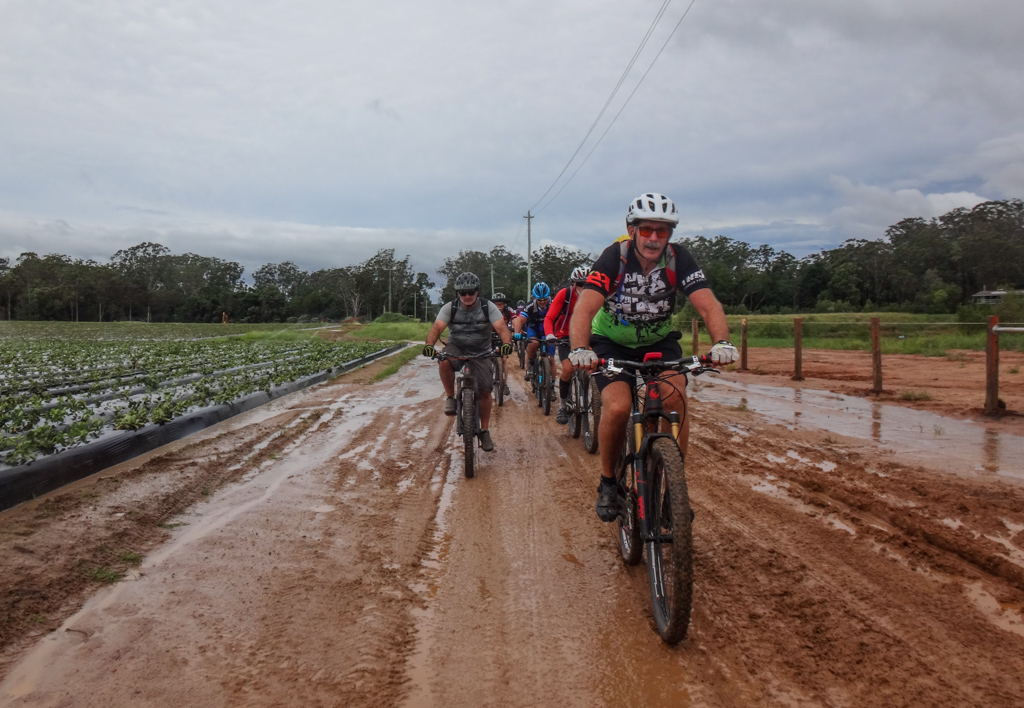 The track past the strawberry farms was especially muddy. 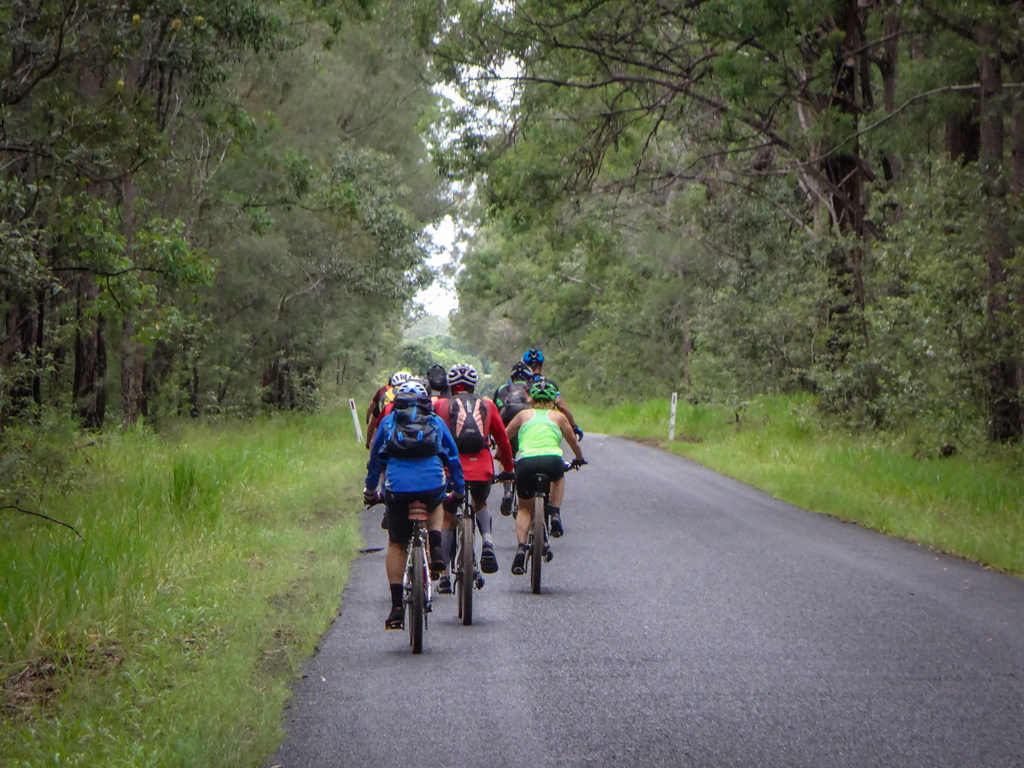 Unfortunately, the people with the courses in their GPS were at the back of the pack.

Everyone else missed the turn-off and kept riding down the road for a couple of kilometres.

Eventually I called Bangers on the mobile phone and suggested he turn around.

To avoid the paved roads we cut through the Beerwah section of Glasshouse Mountains National Park.

The track was soggy in spots, but it was reasonably firm and easy to ride. 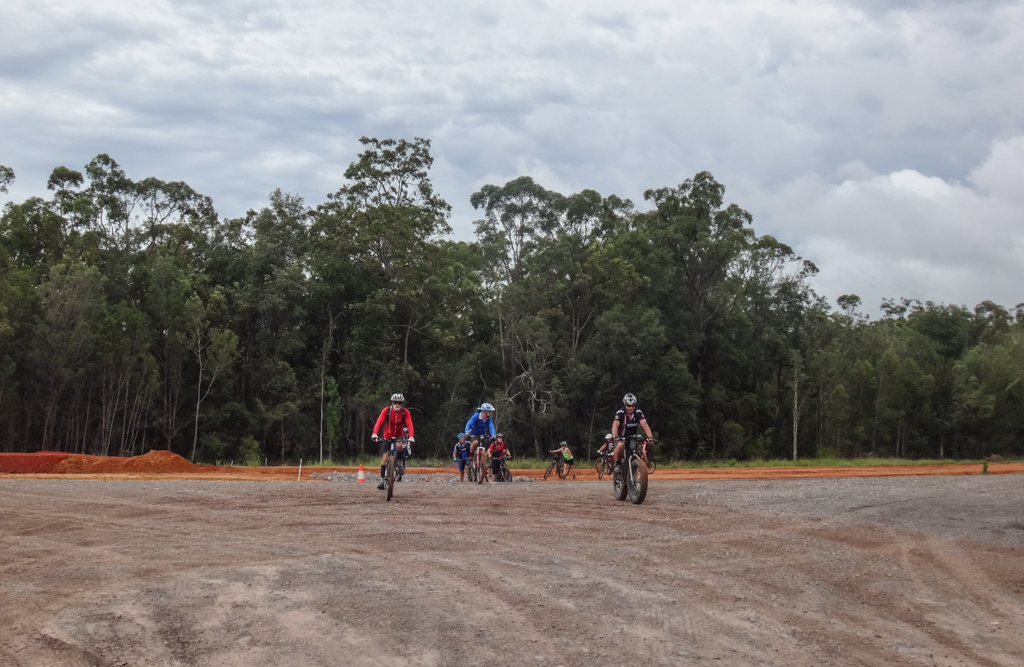 We slipped and slid through more mud near road works on Roys Road and continued north. 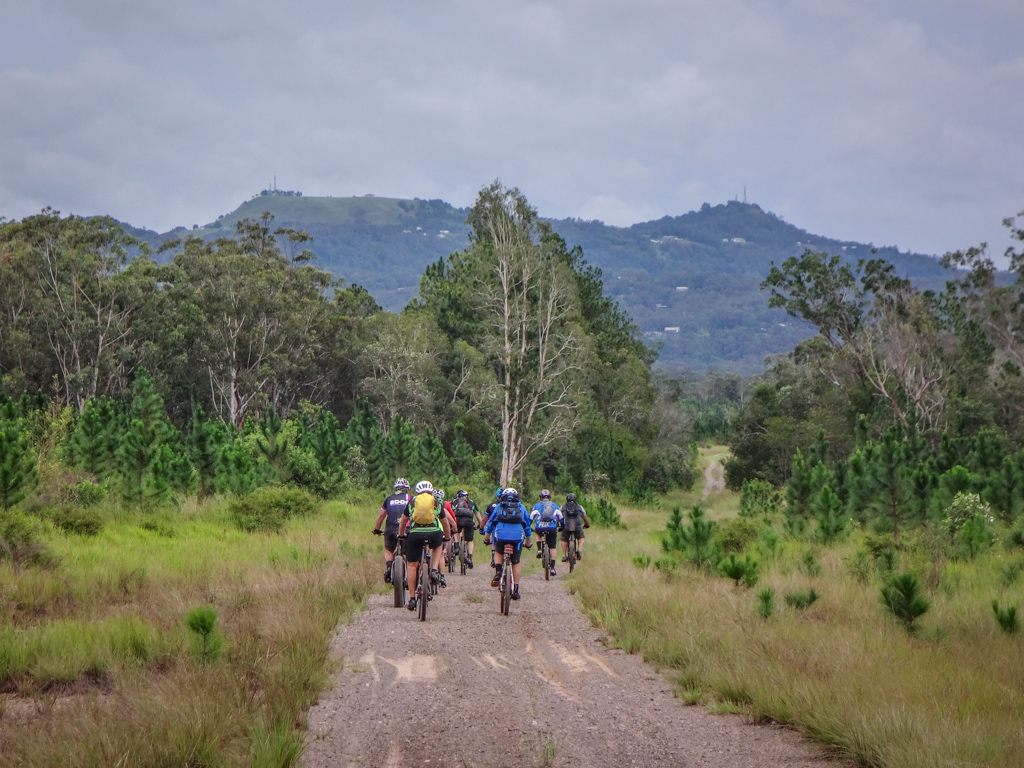 Towards Landsborough the skies started to look menacing.

We decided to end the ride there and catch the early train home rather than risk getting stuck in the rain, and having to wait another ninety minutes for the next train.

We rode a total of about fifty kilometres in about four and a half hours including breaks.

During that time we climbed about 350 metres in elevation and I burned about 1,800 kcal.

This was a leisurely ride on easy tracks.  The mud posed a slight challenge, but it added to the fun.

It was a perfect day for a large bunch of friends to have an enjoyable get-together on wheels.

Thanks everyone for another good adventure. 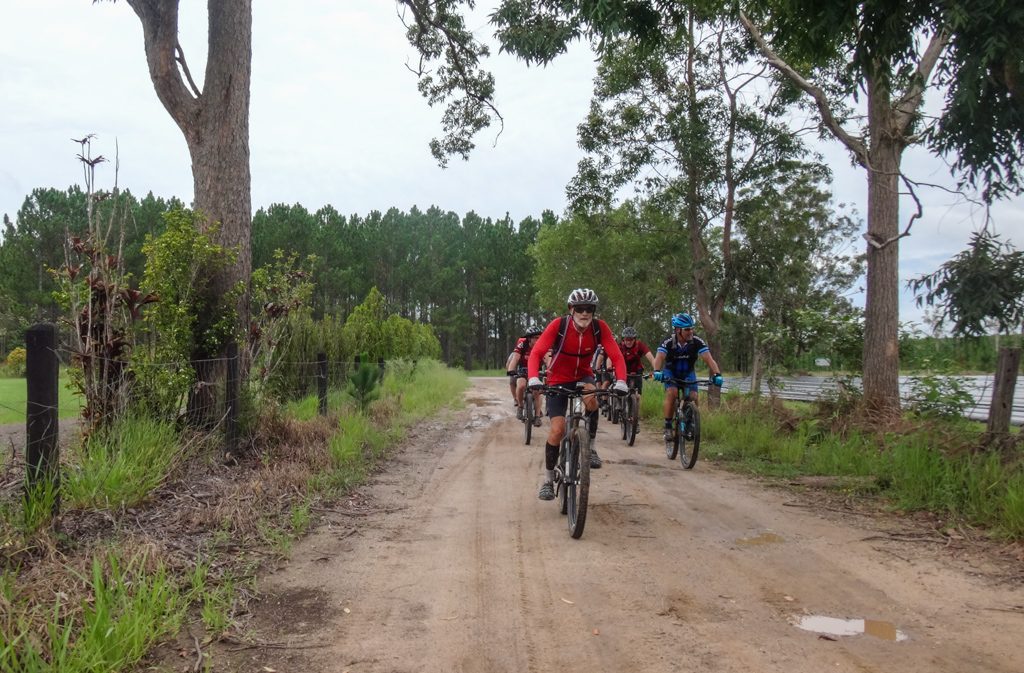 2 Replies to “Riding With Friends”