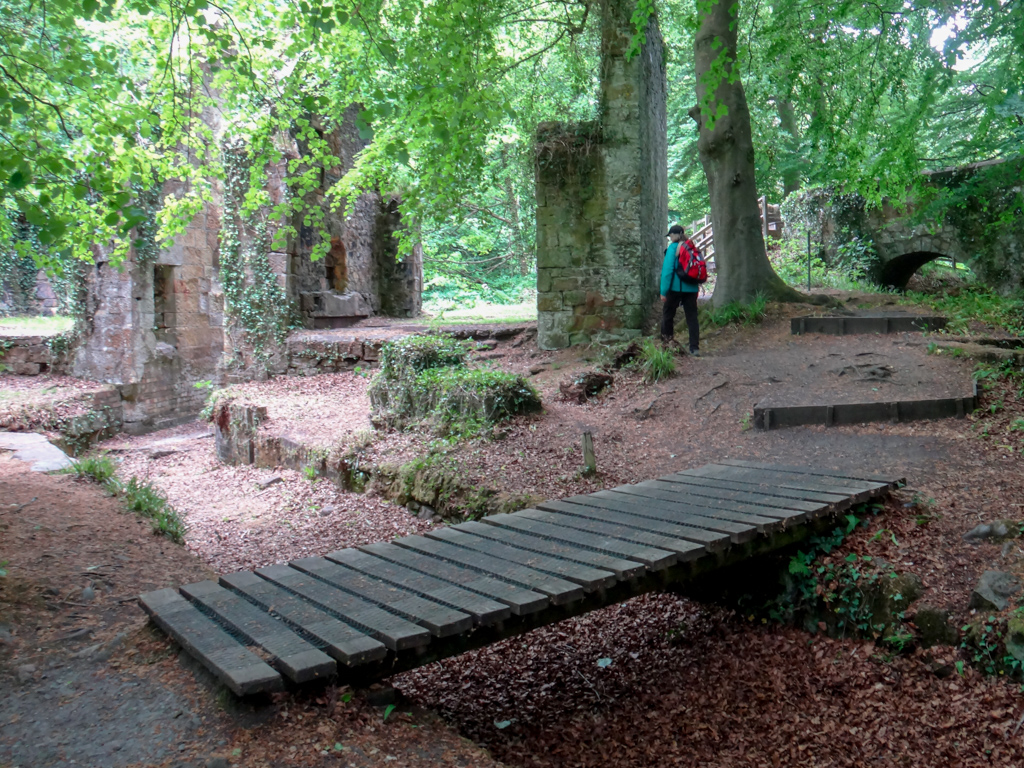 For our final full day in Scotland, Laura and Ken took us for a hike through Roslin Glen, a picturesque park south of Edinburgh.

The echoes of history ring loudly through Edinburgh. Wherever we looked, there were reminders of events from long ago.

We took advantage of the unseasonal sunny Scottish weather to explore some of the local sights. Standing amidst the monuments atop Calton hill, you can see forever. 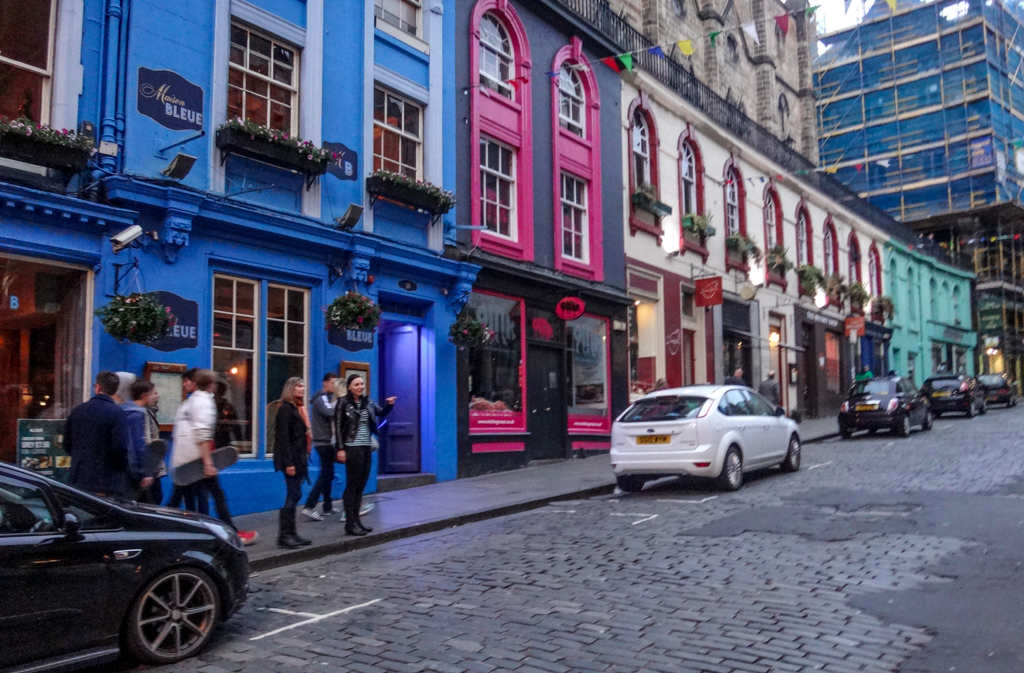 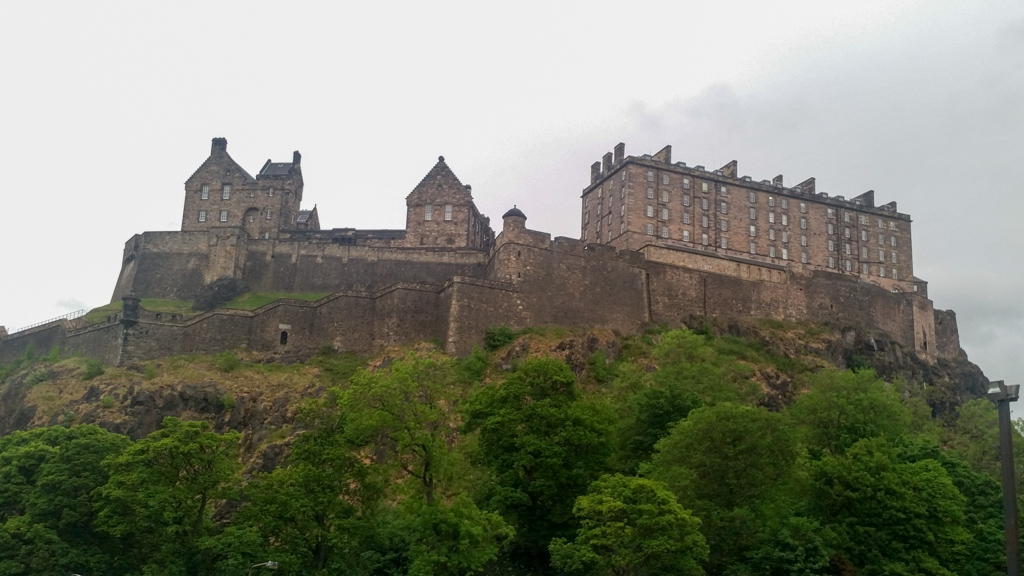 We spent some time wandering around the old cobblestone streets, under the brooding gaze of the castle, just soaking up the feeling of the place. 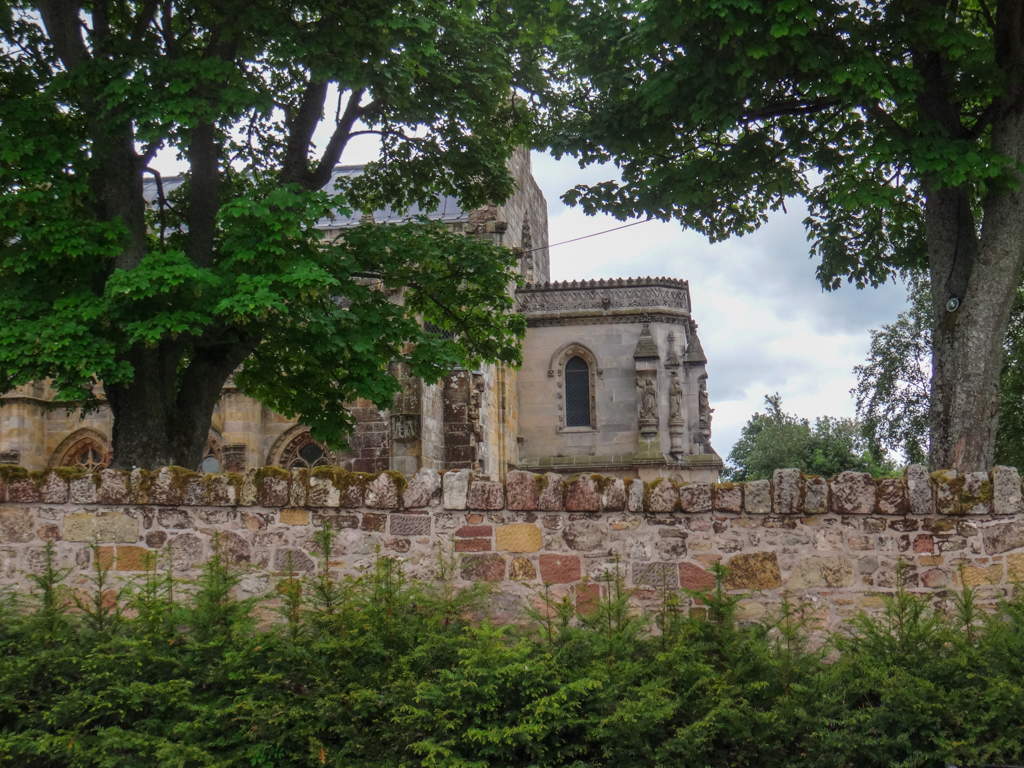 Roslin is about ten kilometres south of Edinburgh.

Its complex history is intertwined with the Knights Templar, Scottish hero William Wallace, and the Clan Sinclair.

It was here in the fourteenth century that an army of 8,000 Scotsmen defeated 30,000 English invaders, setting up almost four hundred years of Scottish independence. 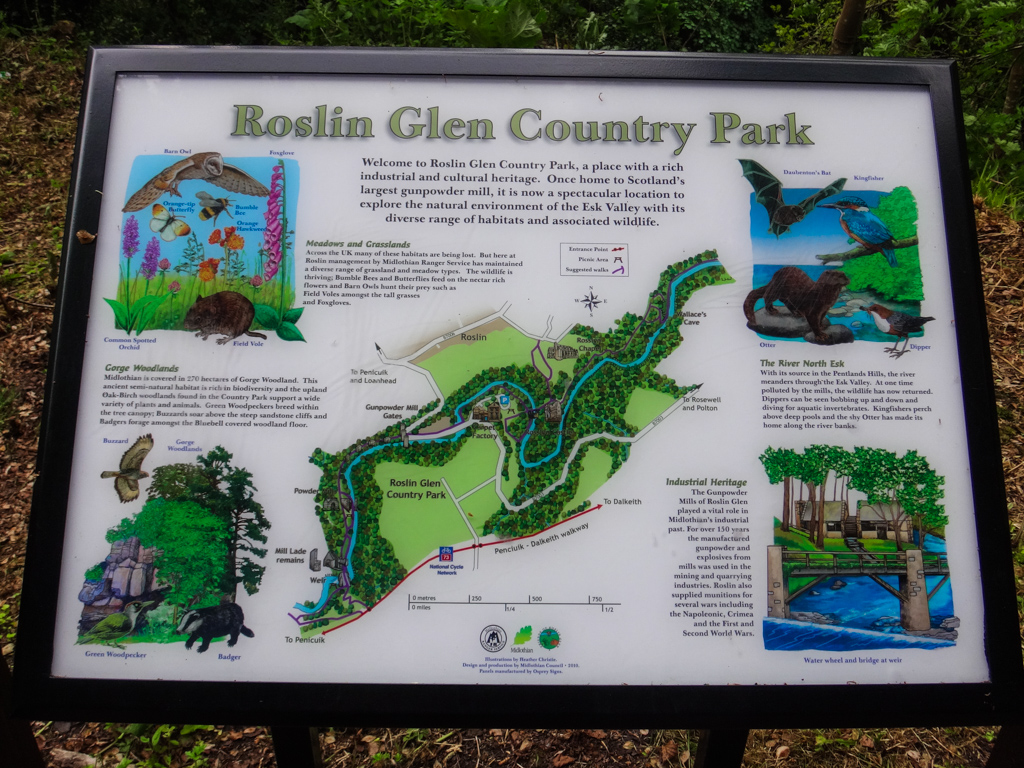 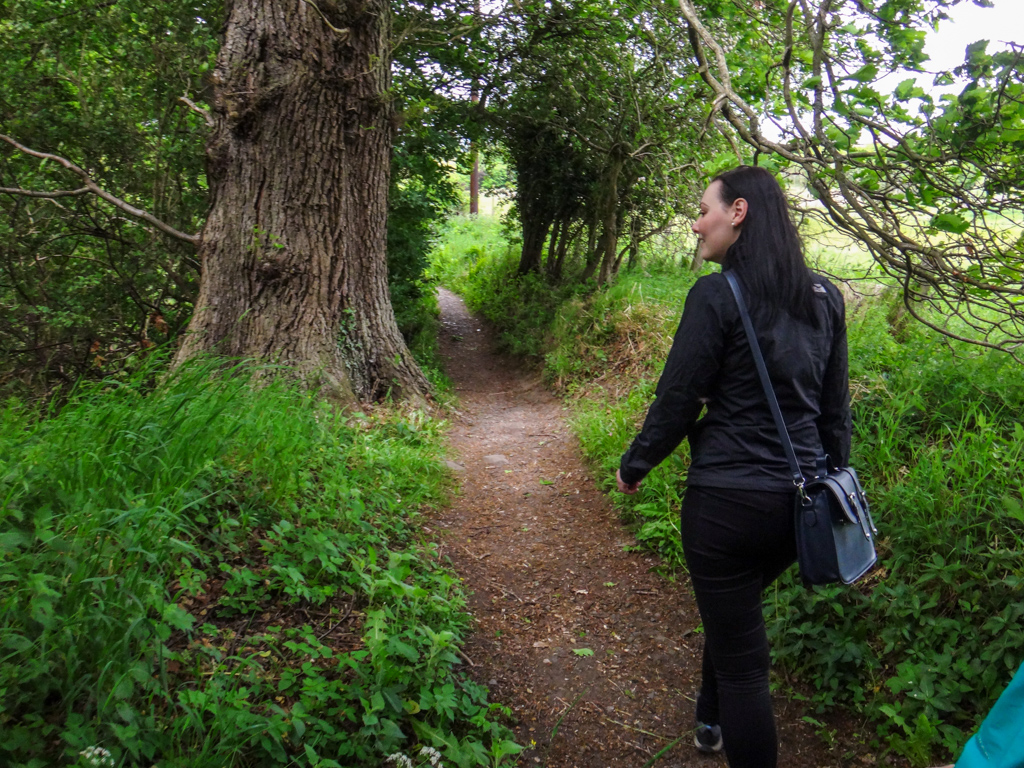 Rather than do the “tourist” thing and visit the chapel, we hiked through Roslin Glen instead. 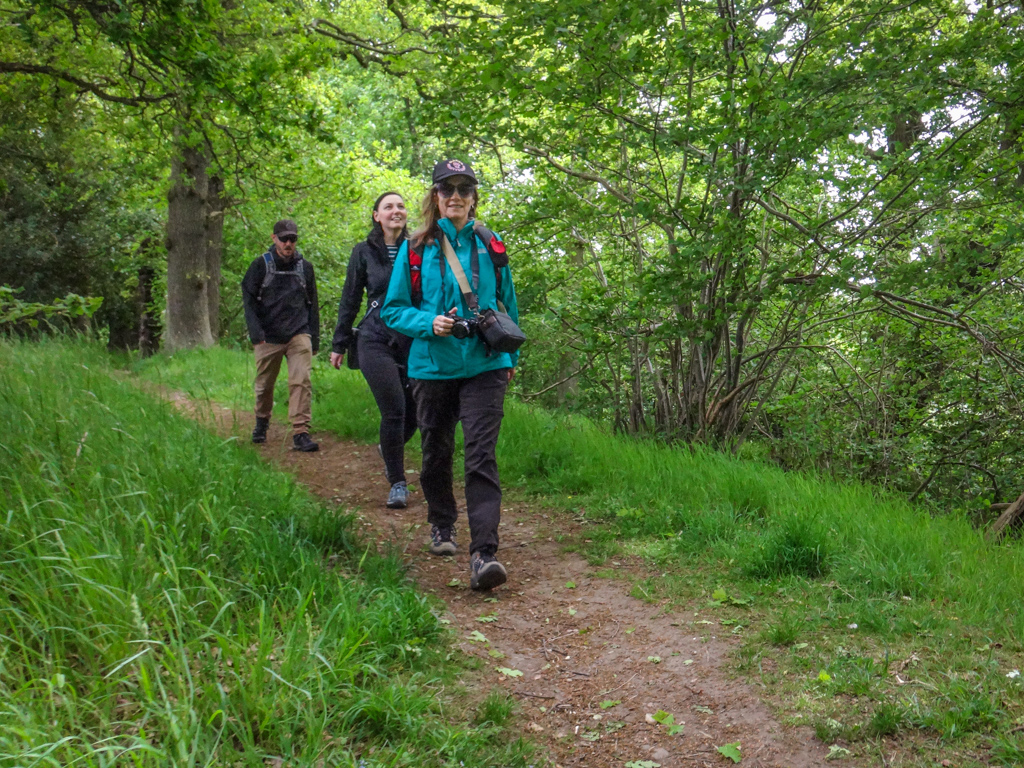 There are miles of walking tracks in the park. We didn’t have a set plan about where we would go. We just followed the track and hoped for the best.

Some of the tracks follow the banks of the River North Esk.

We followed the river upstream, surrounded by lush green trees and shrubs.

It was perfect weather for walking – about 18C. Neither too hot nor too cold. Goldilocks would have been pleased 🙂 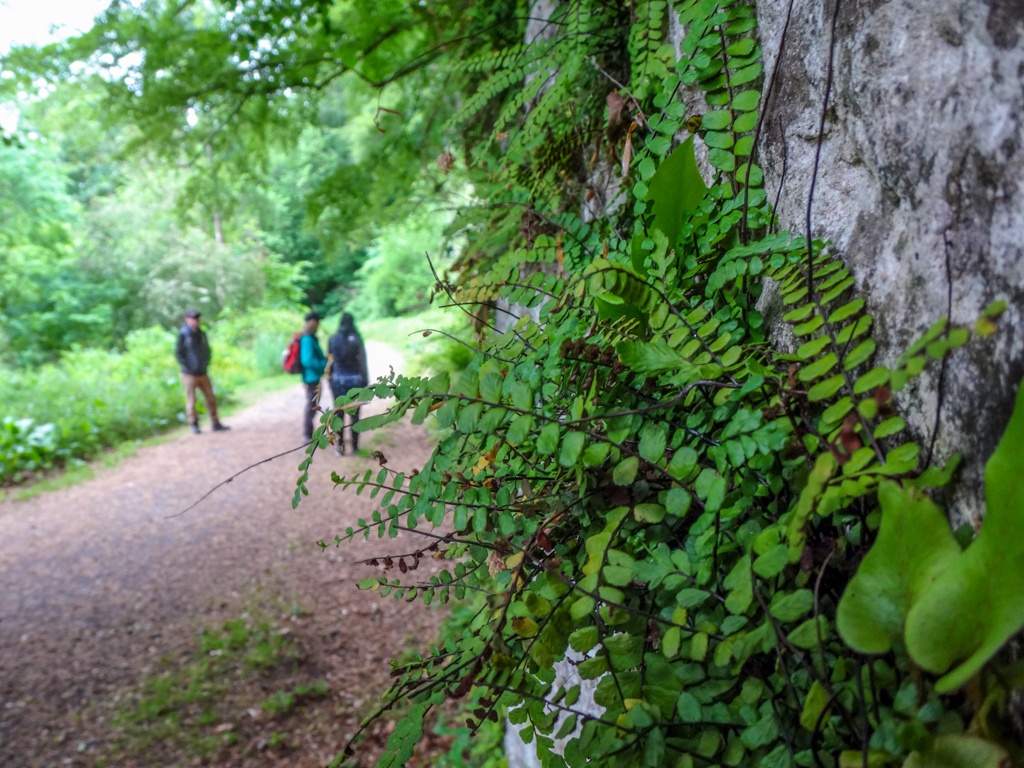 Occasionally we stopped to enjoy the sights and look at the plants.. We weren’t planning to set any speed records today.

There was once a gunpowder mill here.

Built around 1800, the mill produced explosives for quarrying, and munitions for the Napoleonic and Crimean wars, as well as the First and Second World Wars.

It was powered by a huge water wheel, and at one time was the largest mill in Scotland. 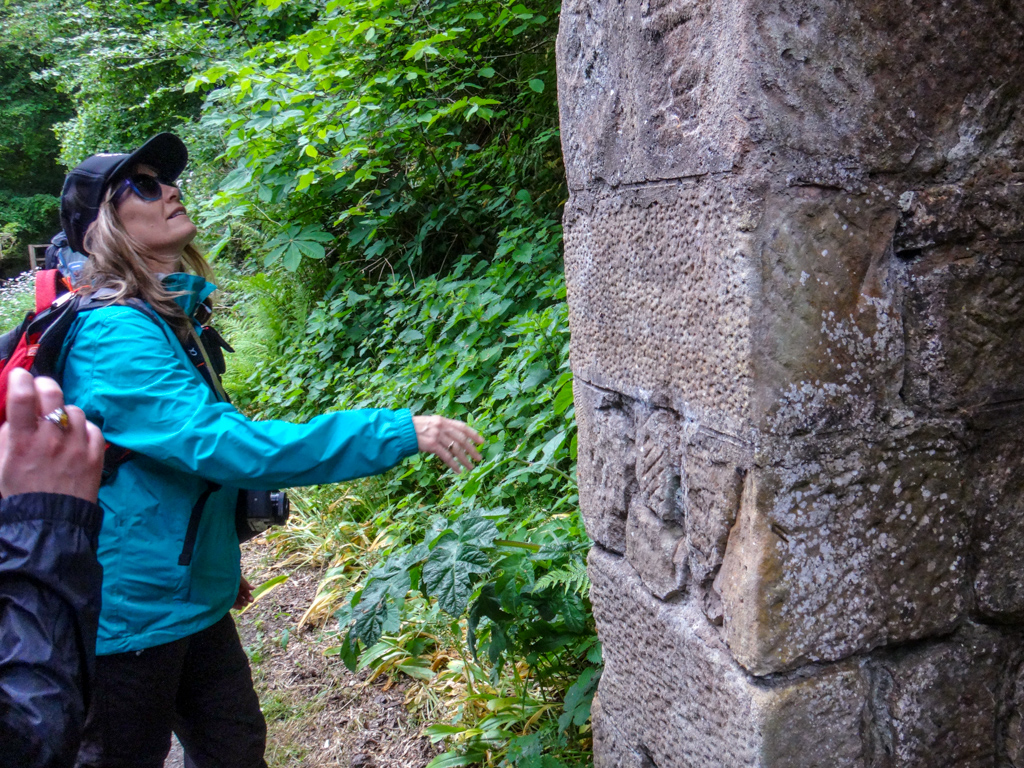 The water wheel no longer turns, but if you listen carefully, you can sometimes hear echoes from the past.

We wandered past old stone pillars and strange-looking facades. 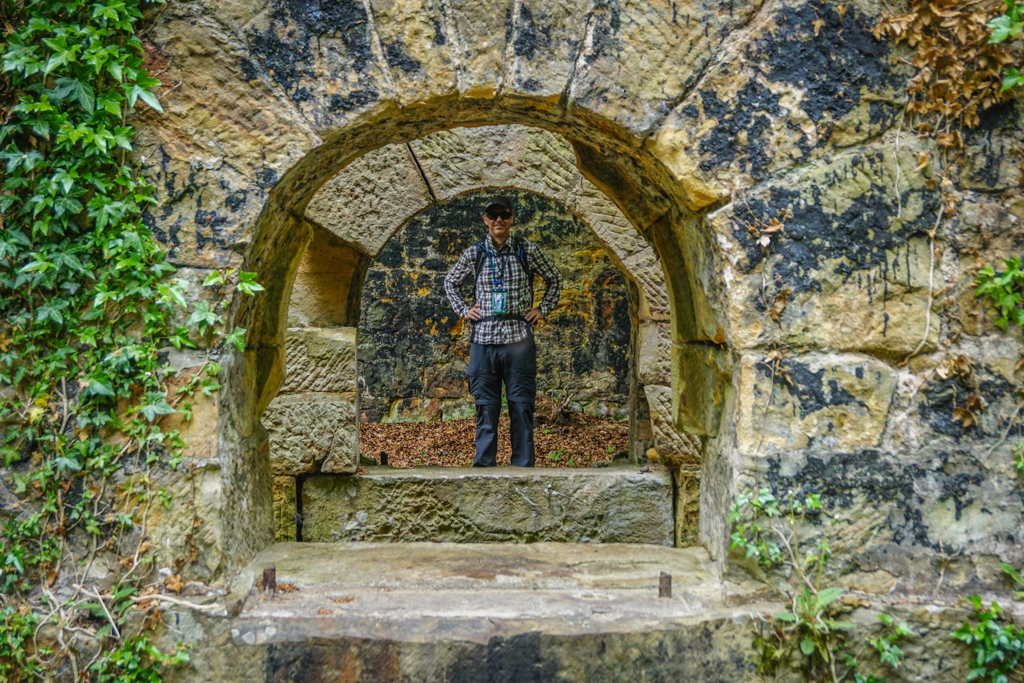 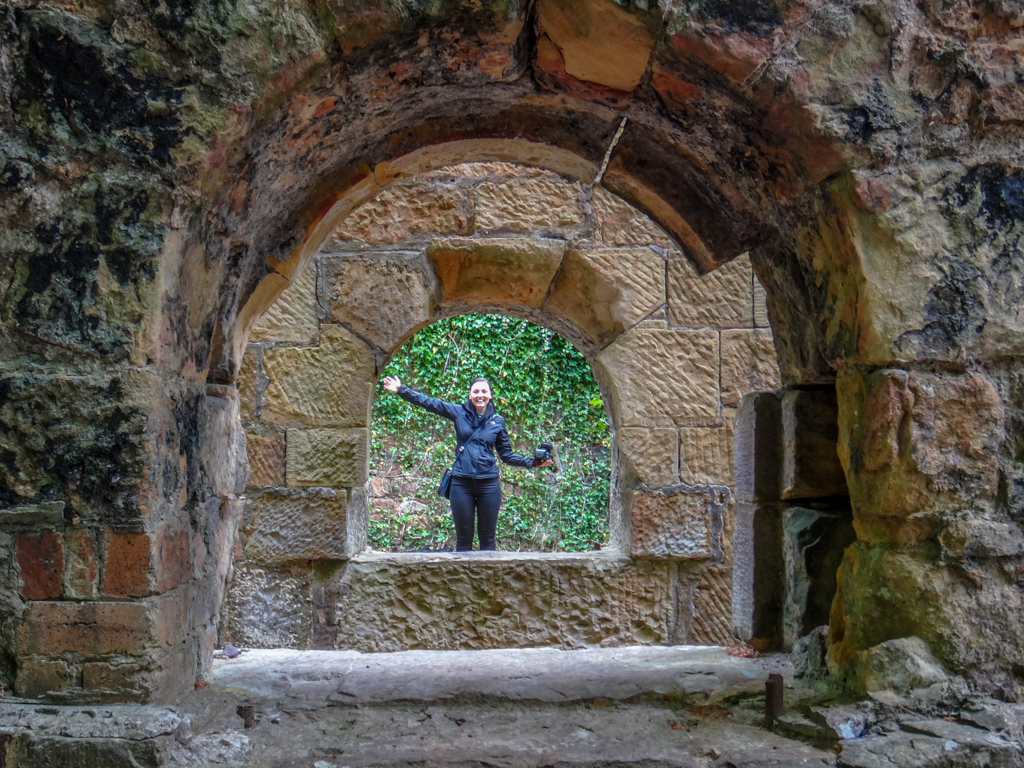 Laura and I stood near the large holes in the brickwork which seated the axle for the water wheel.

If the axle was as big as me, it must have been a gigantic wheel.

The wheel once sat between two high walls. Water was diverted from the river to run through a channel which passed between the two walls and turned the wheel. The power of the water was then harnessed to grind the ingredients for the explosives.

The workers used brass hammers to reduce the risk of sparks.

Even so, there was at least one large explosion in the glen during the history of the mill. 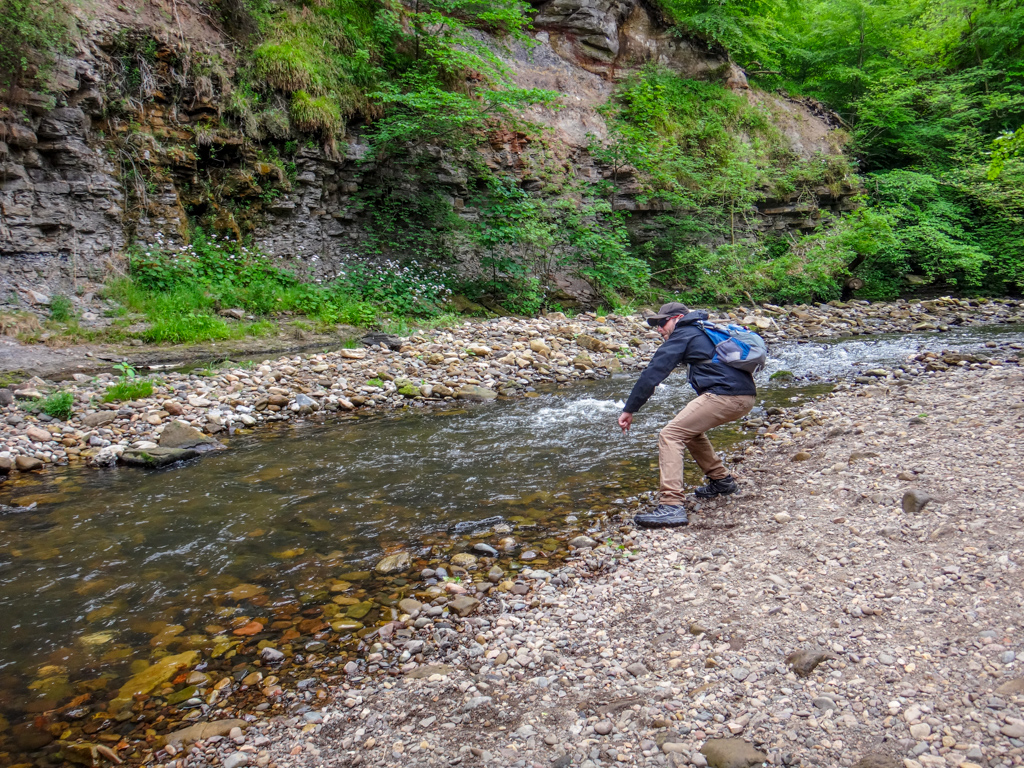 Ever the scientist, Ken conducted experiments relating to the refractive properties of water in relation to rotating stones.

For the record, he got about five skips, but I got none – so it’s therefore scientifically unclear whether or not stones really do bounce off water. 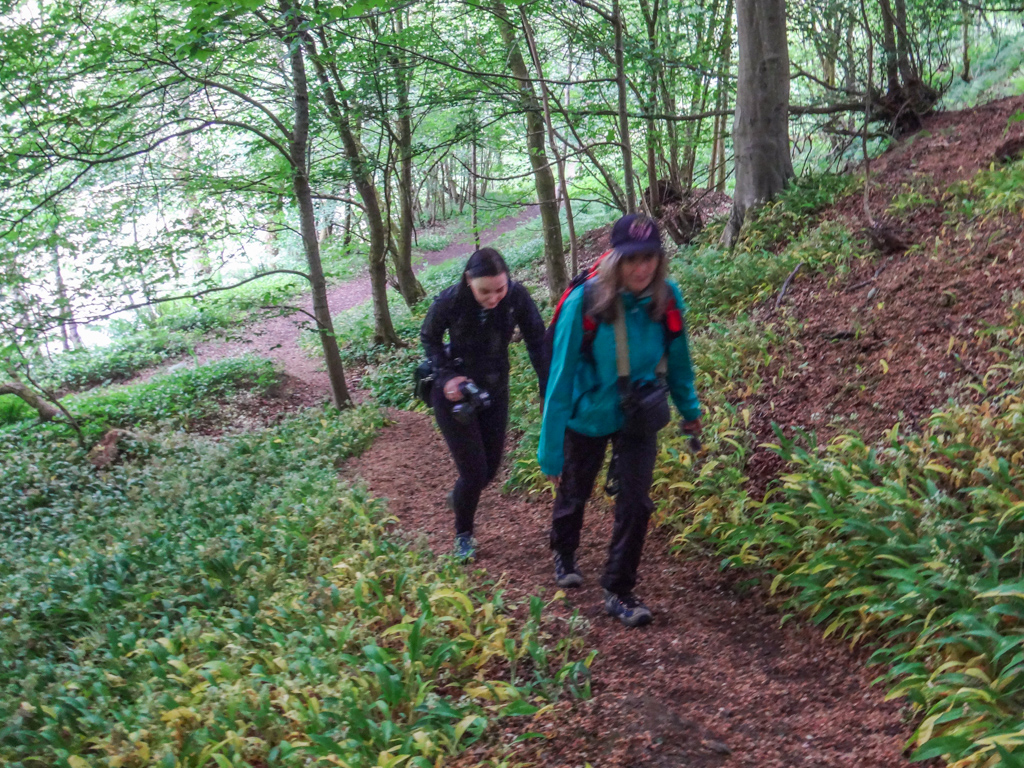 We left the mill site and clambered up a short track to an old railway line. 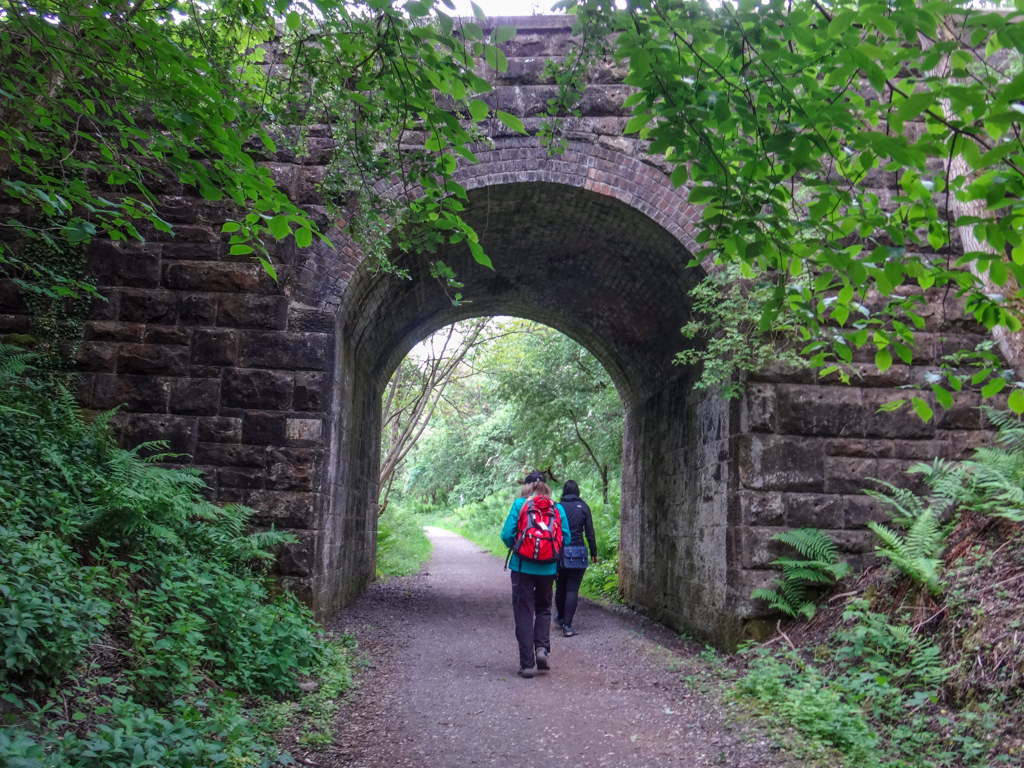 This is where we made a slight mistake.

If we had turned left here, we would have completed an easy route back to our starting point via the river, and Roslin Castle.

Instead, we turned right, following the remains of the old railway line westward. 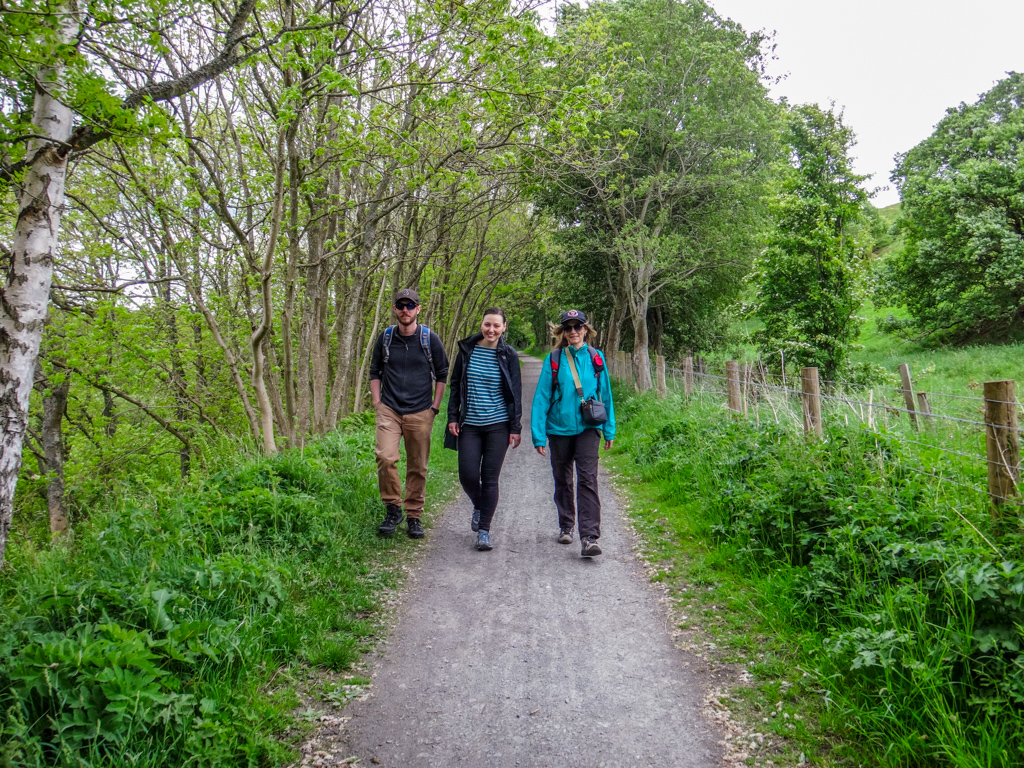 We had all day, so it didn’t really matter which way we went.

The best hikes don’t have deadlines.

A railway line once ran through here from Peebles to Edinburgh, a distance of about 35 kilometres. It was built in the 1850’s and ceased operation in 1962.

Today this section is a popular cycling route between the towns of Penicuik and Dalketih.

Ken’s eyes lit up when he fist discovered it: It would give him a pleasant car-free commute to work. 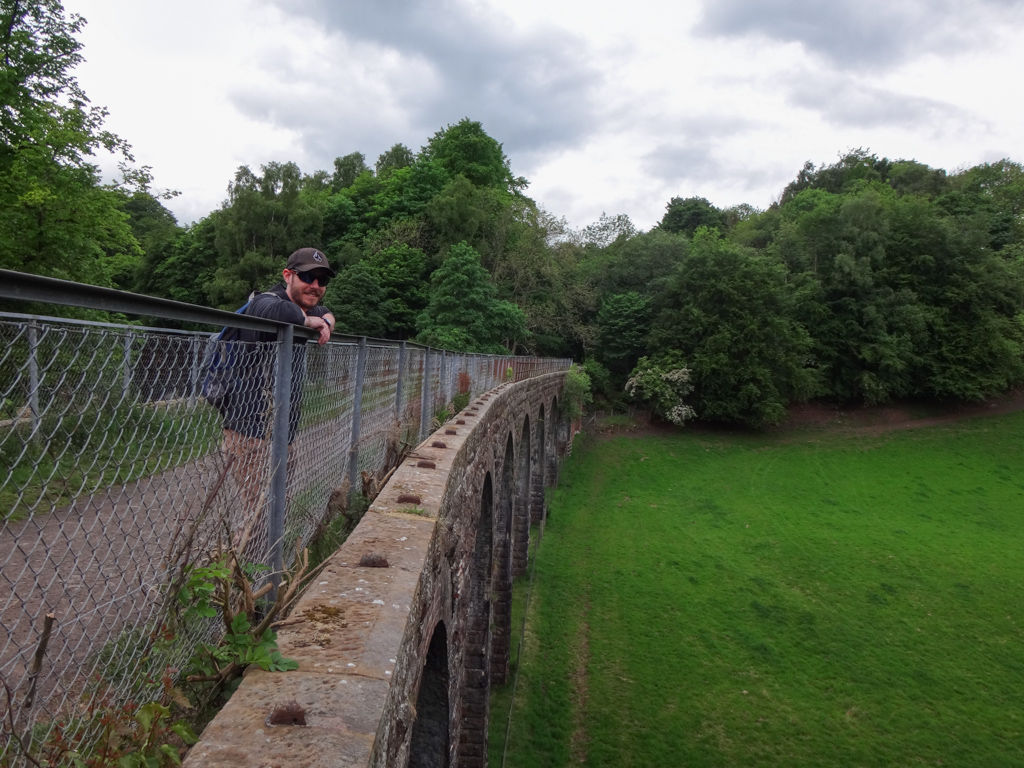 I was excited but confused when Ken told me we’d be walking over a viaduct.

As we passed over it I looked puzzled and asked “so where is the water?”

Ken patiently explained that I was thinking about an “aqueduct”, which is an elevated canal for moving water.

This was a viaduct. The only water involved was in the river below.

I was still confused. What was the difference between a viaduct and a plain old “bridge”?

I later discovered that a viaduct has a series of short spans, which give it the typical set of arches. So a viaduct is a type of bridge. 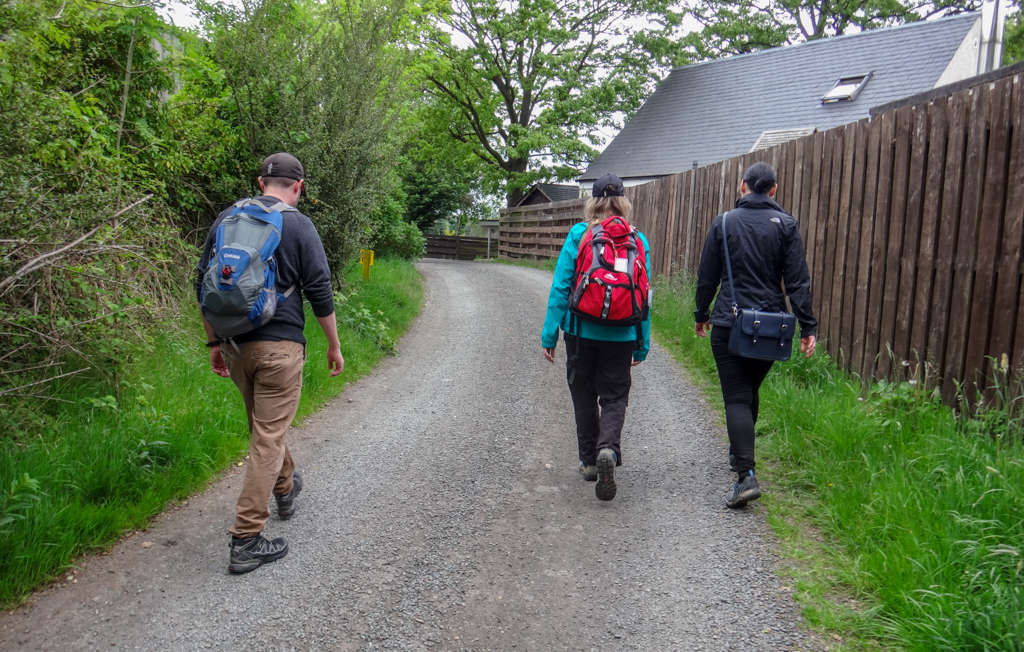 A few minutes later we entered the village of Auchendiddy.

I suppose after some of the strange Aussie and Icelandic places we’ve visited, I didn’t have any cause for complaint. 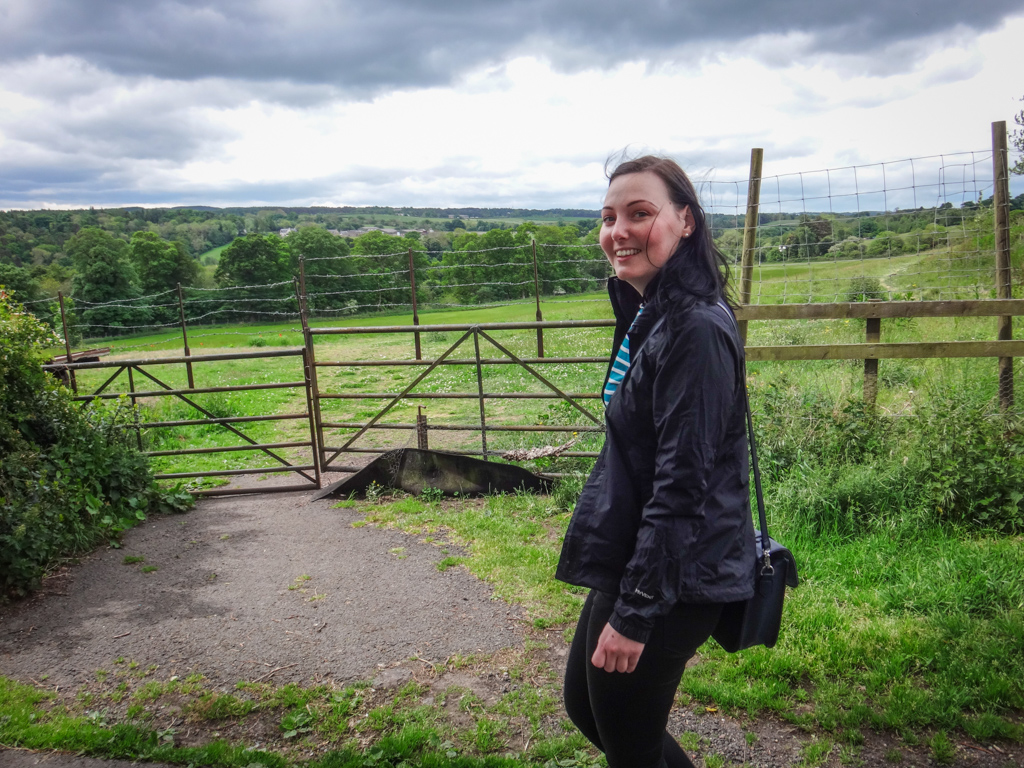 We still weren’t totally sure where we were going, but we enjoyed the expansive views of the green pastures as we left the woods behind. 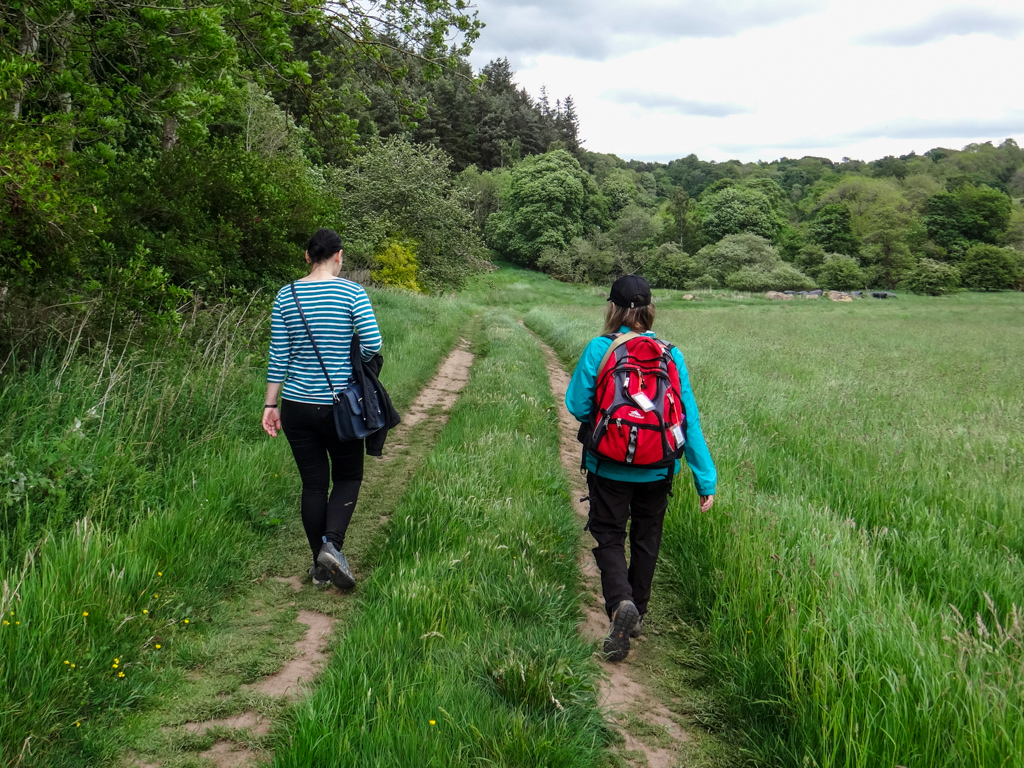 I consulted my GPS and thought we might be able to find a shortcut back over the river if we followed a dirt track.

It turns out the road was a dead-end. There was no way back over the river, so we retraced our steps for a while. 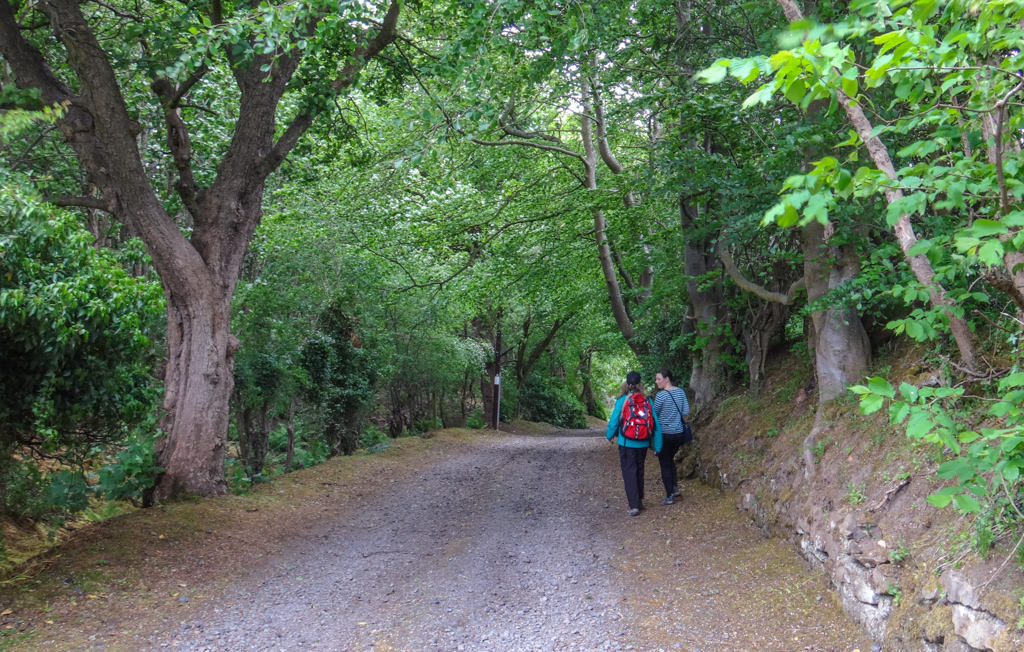 For a second time we took another detour in the hope of getting back to the other side of the river.

Unfortunately this one ended up in someone’s garden.

We met the surprised land owner, who patiently pointed us in the right direction towards Roslin. 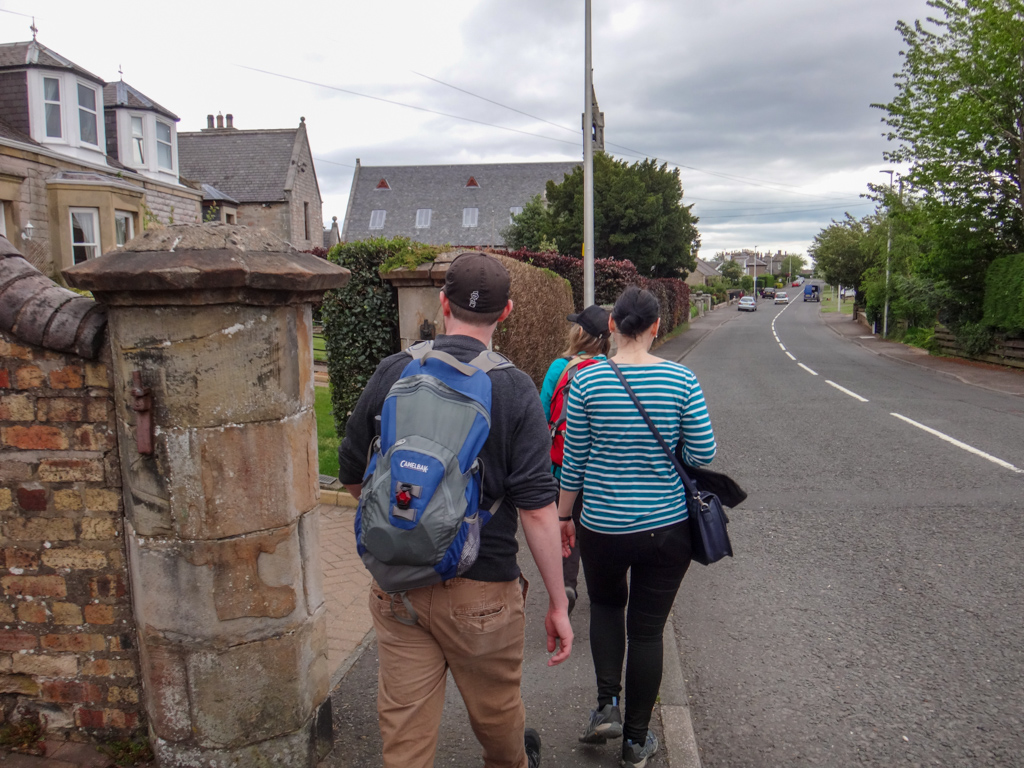 We walked the last couple of kilometres along quiet paved roads.

It was getting close to lunch time, and we did what any decent hiker would do… 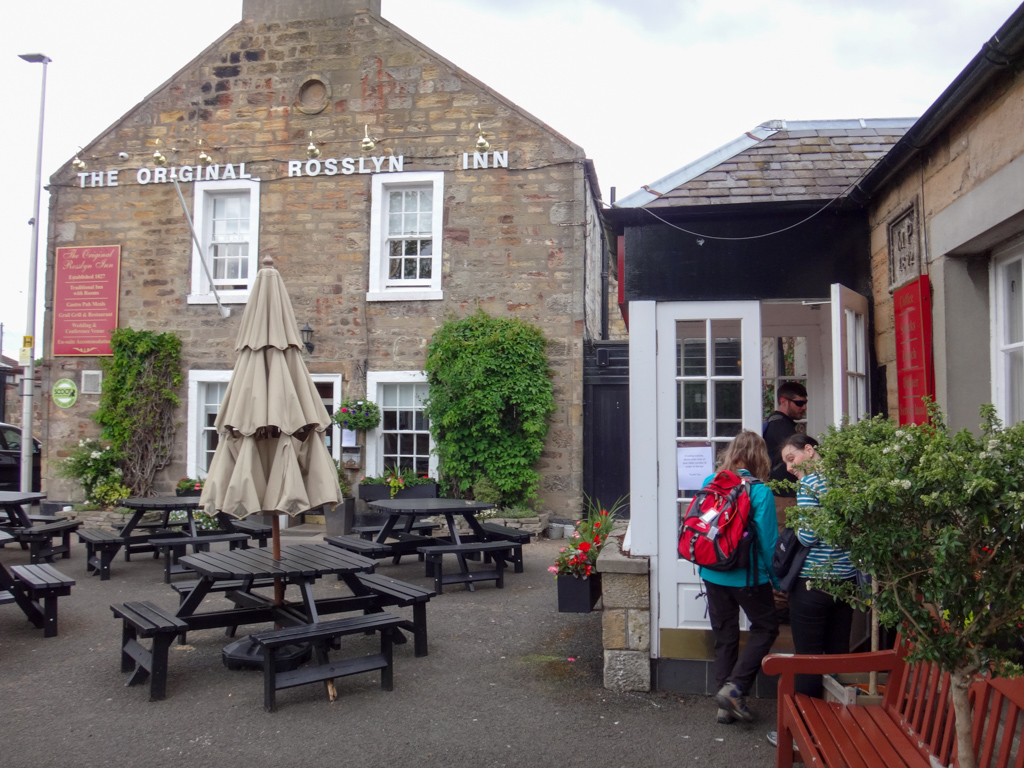 … and popped into the local pub for a hot lunch and some cold beer.

This was more of a “wander” than a hike – which was perfect for the conditions.

As Tolkein says, “Not all those who wander are lost”. Roslin Glen is the perfect place to wander for a while.

Thanks Ken and Laura for a memorable time in your beautiful part of the world. I hope we return soon.

A short visit to the Isle of Skye