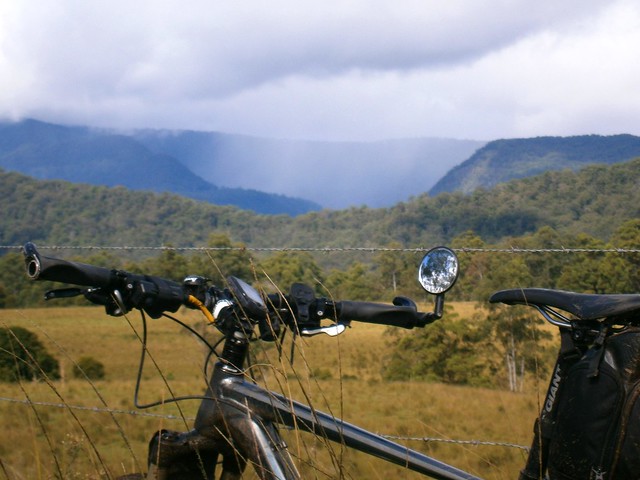 Like its name suggests, the Border Ranges National Park is a mountainous area of rainforest on the border of NSW and Queensland, just south of the border. It rises above 1,100 (3,600ft) in places and is covered with thick lush rainforest, towering trees and fast flowing streams.

The area is the traditional country of the Githabul Aboriginal People. It covers some of Australia’s most scenic country covering a number of natonal parks amd state forests around Kyogle, Woodenbong and Tenterfield, such as Koreelah NP, Mount Clunie NP, Richmond Range NP, Mount Northofagus NP, and Mount Lindesay State Forest.

Our plan was to start an 80km loop at the north-western edge of the park, head south towards Kyogle, then loop back northwards through Lynches Creek. This was quite ambitious considering we had to drive two and a half hours to get there in the first place, and considering the fact that that I find it very difficult to get out of bed early. 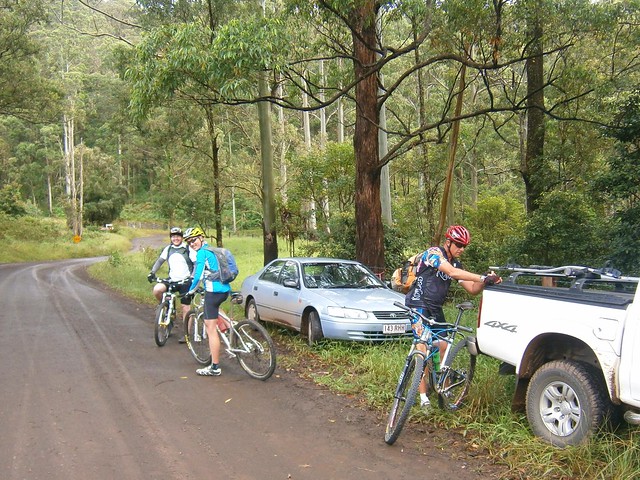 We arrived at the starting point, Simes Road, at 9:30am – a little later than we had anticipated and were optimistic we could make good time if we kept the pace up. 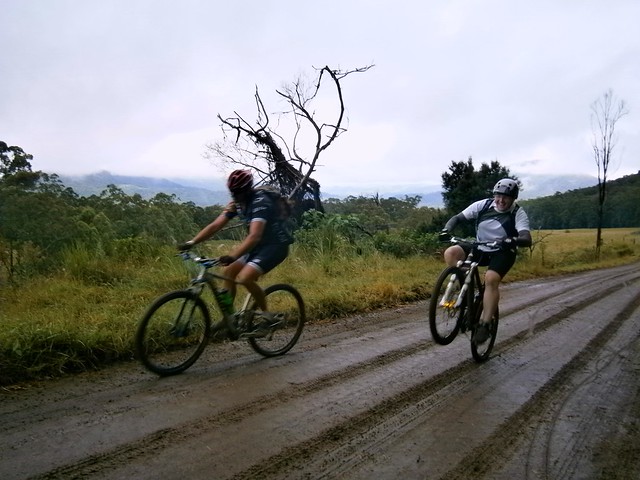 The roads were muddy from the overnight rain. Being from the UK, Adi was used to wet tracks, and showed us how the Brits handle mud by popping a wheelstand while riding up one of the steep hills. 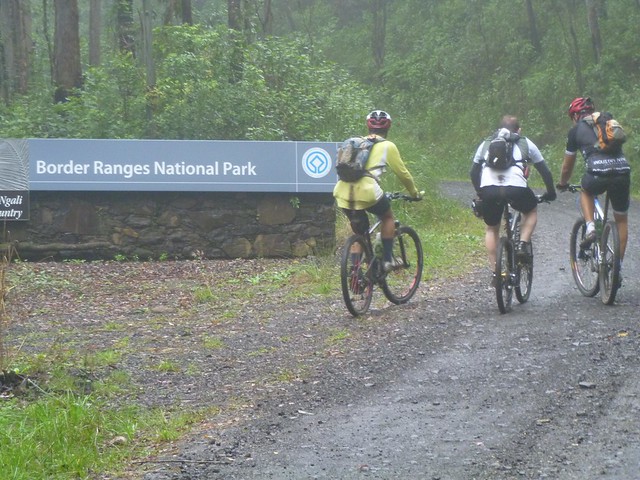 After about half an hour climbing, farmland gave way to rainforest as we reached the entrance to the National Park. 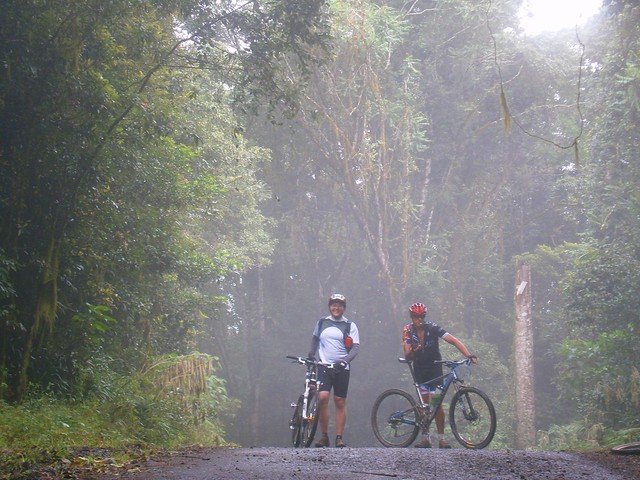 We didn’t realize that we’d be climbing for well over two hours before we reached the top of mountain. Physically this was ok – we were all used to long climbs. You just sit back, turn the pedals, and enjoy the view 🙂 The problem was that it meant we made much slower progress that we had expected, and we didn’t get to the top of the range till about 12:30. 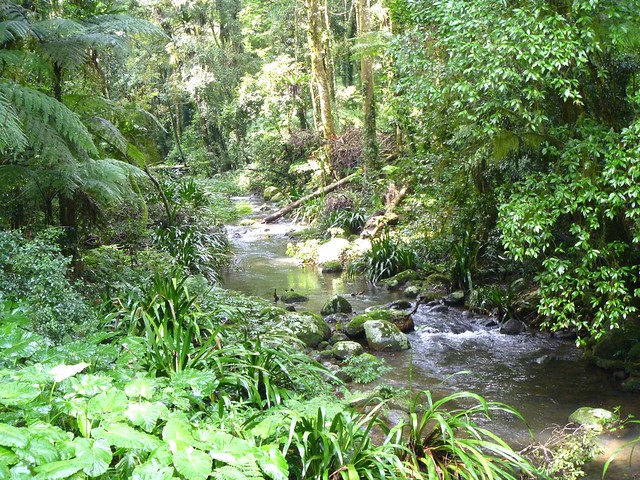 It started to rain fairly heavily on the way up, so we were all quite wet by the time we got to the top. This, and the mist, meant that we couldn’t see anything from the lookout, but Brindle Creek looked spectactular. There’s something about a bubbling creek in the middle of a misty rainforest that stirs my soul. 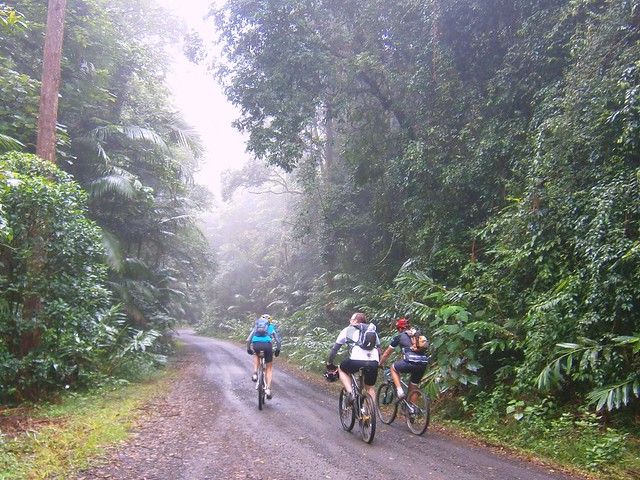 At the eastern edge of the loop through the rainforest the track splits in two where Bridnle Creek Road meets Tweed Range Road. Our intended route was southwards. The other alternative was to take Tweed Range Road westward back to our starting point. This would shorten the ride by more than half. We talked about it for a while. It was getting close to 1pm, our intended route still involved 60km of muddy roads and heavy rain, and we still had a 3 hour drive home after that. So we decided to take the shortcut and head back downhill along Tweed Range Road. At least we’d end up getting home before dark. 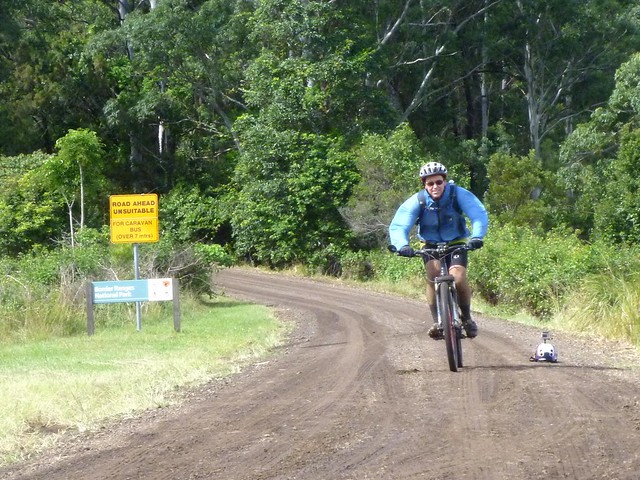 (Photo by Nick Mills)
While it took us over two hours to ride UP the range, it only took us about 20 minutes to ride down. It was incredible fun. Riding downhill at close to 60km/h in a wet jersey makes you very cold, so I decided to put on a jacket to keep the wind out. One consequence of that is that the wind inflated the jacket, so by the time I reached the bottom I looked like the Michelin Tyre man 🙂 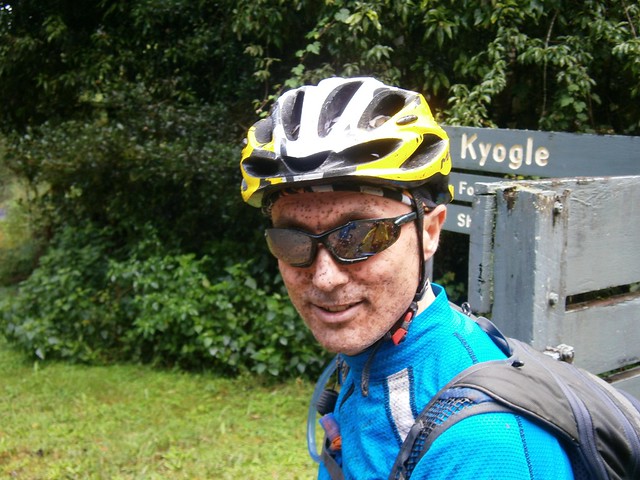 Being a much tougher rider, Nick decided to give the jacket a miss. But he still ended up wearing a fine mask of mud all over his face by the time he got to the bottom of the hill. 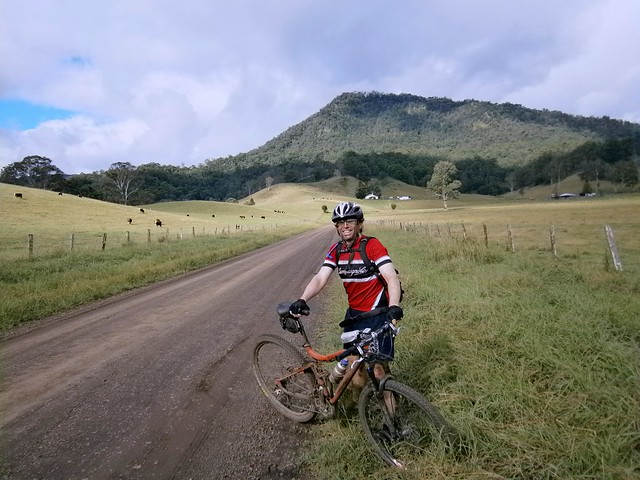 Perhaps the biggest surprise of the day was when we got back to the car, and met our exhausted and mud covered friend Dean grinding his bike up the hill from the other direction. He had actually started the ride two and a half hours before us. Unlike us, he slogged it out the entire way finishing the 80km loop at about the same time we finished our 35km loop.

What was most impressive was that he had parked 5km down the road from us at the top of Simes Road. So he kept pedalling on while we got in the cars to leave. 5km later when we had driven to the top of Simes Road, we looked in the rear view mirror, and there was Dean right behind us on the bike. After an 85km slog through the hills, he was able to go head to head with a 4wd over 5km in about the same time. Good on ya, Dean! 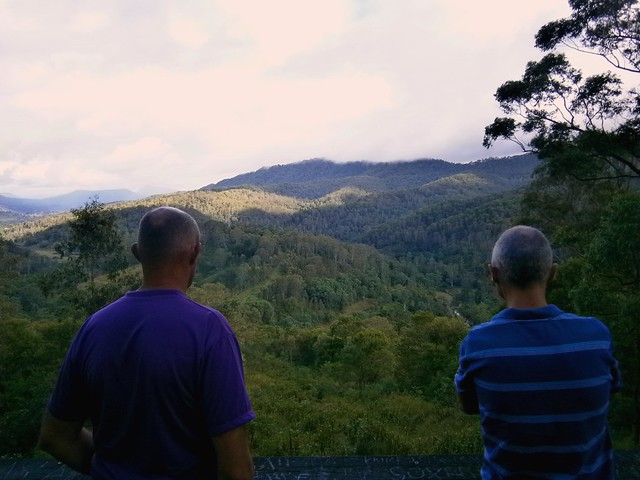 On the drive home we stopped at the Railway Loop Lookout. Just before it reaches the Qld / NSW border, the railway line has to climb several hundred metres in a short time. The engineers came up with a novel way of overcoming this obstacle by making the railway loop over itself in a big circle (see the google map below). You can see this unusual bit of railway from the lookout.

All up, 35km in 3 hours with 1,100m of ascent and 4,000kcal bunred. I can’t rate our intended loop as we didn’t finish it. I’m rating our actual loop 8 out of 10 on the tough-o-meter. I would have rated it lower, but the rain made it more difficult, as well as the logistics of getting to and from the starting point. It’s a great loop for anyone who’d like to see some great views over a short distance. But make sure you do it in dry weather!