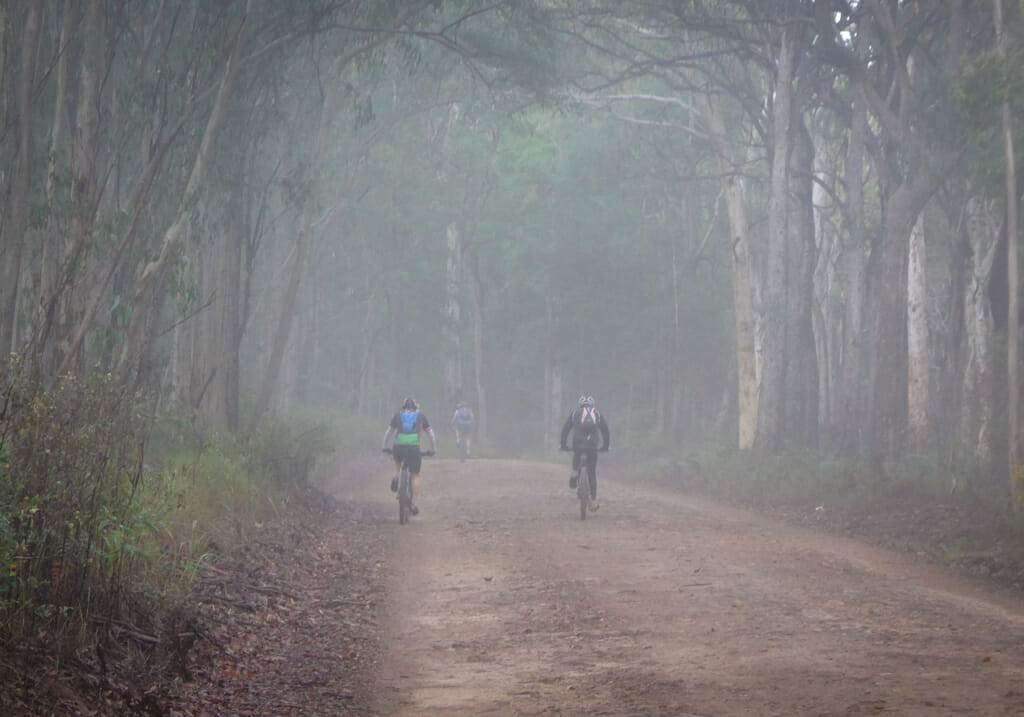 “It’s going to rain on Saturday,” someone said to me during the week.

“Let’s turn up anyway,” I replied, “and see what happens.” 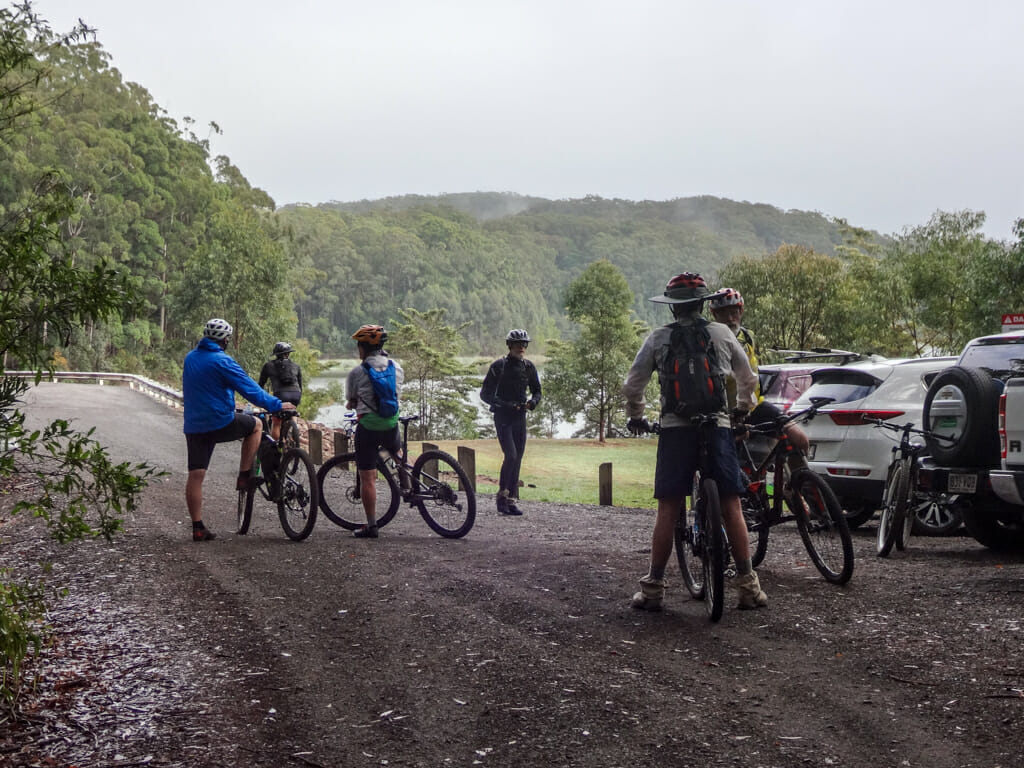 We started today’s ride at Cooloolabin Dam, up in the hills behind Yandina, in Mapleton National Park.

For the first few kilometres we followed the smooth dirt road through the forest up and down some gentle hills.

“This sounds like fun” I thought to myself as we passed the “Change Gear” sign before a steep downhill section. 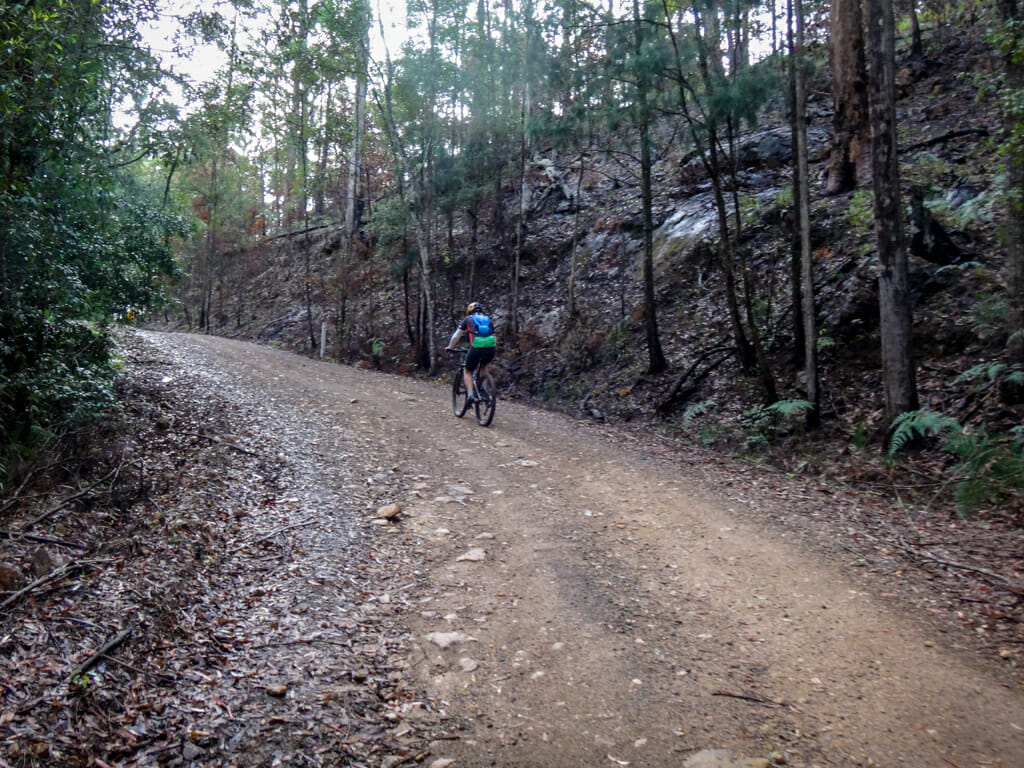 As with most hills, you don’t get anything for free.  After bouncing down “Change Gear” hill, I dropped down a few cogs and pedaled up the other side.

The weather forecast was wrong.  There was no rain, but there was plenty of cool damp mist hanging in the trees.  This was “Goldilocks” weather for cycling – neither too hot, too cold, too wet nor too dry.  Perfect for long rides. 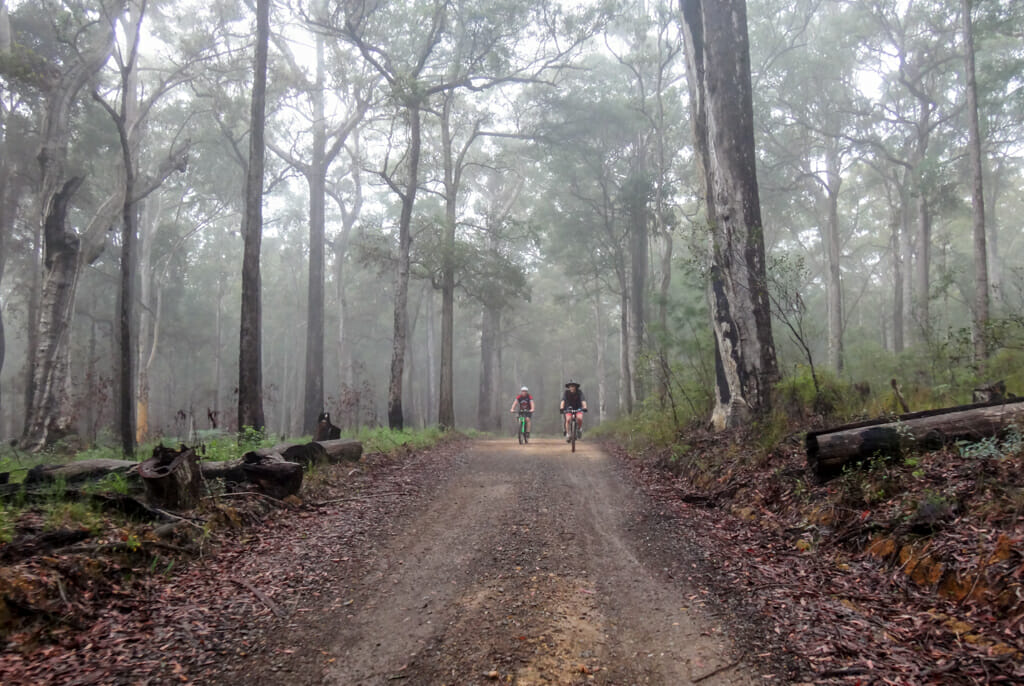 At Cedar Creek Road we turned right and followed the track down the hill. 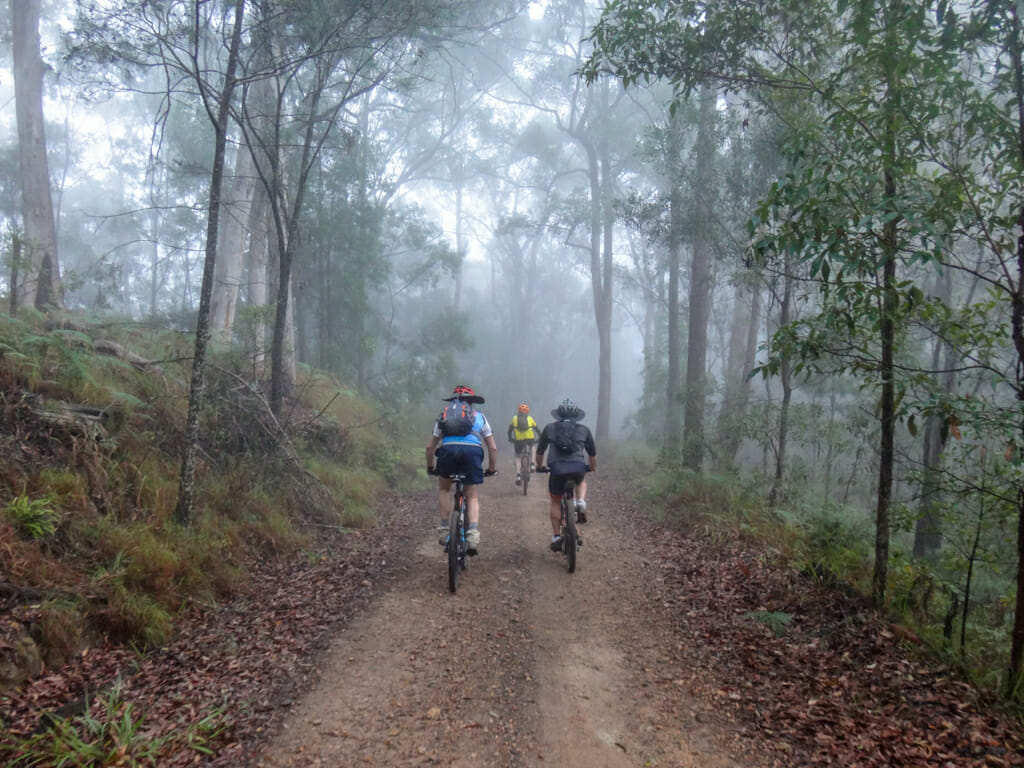 We rolled down the hill for more than five kilometres.

The slope was fairly gentle to start with… 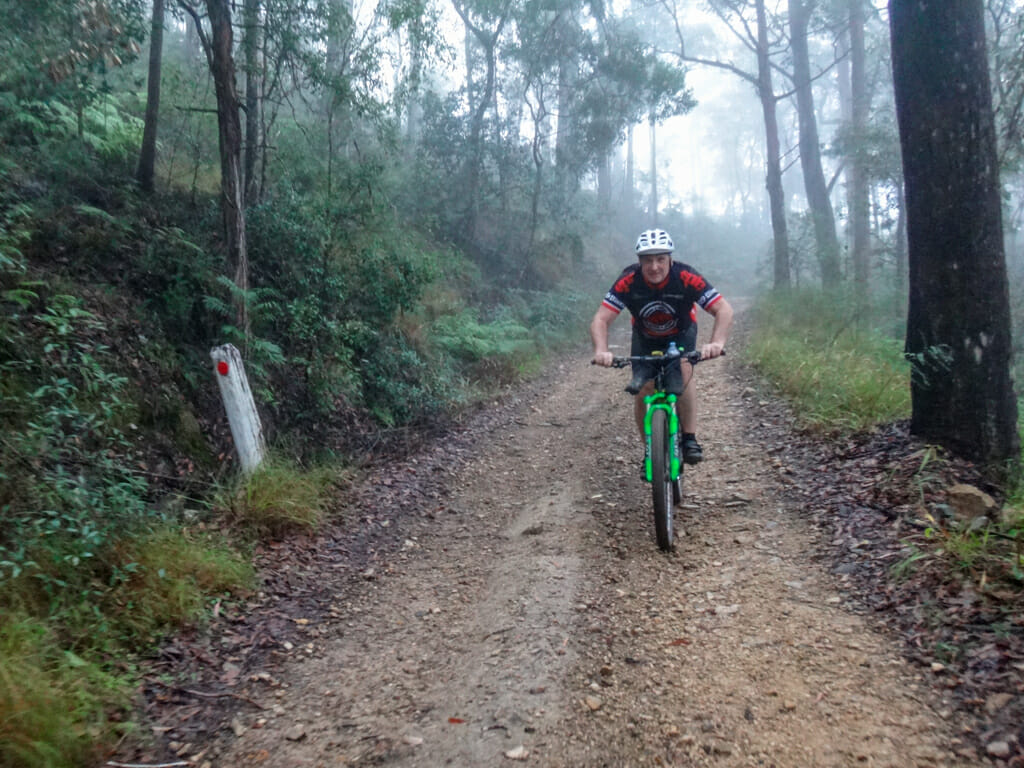 …but as we descended, the gradient grew sharper.  Trees flashed by as we accelerated downwards.

After the long descent we ended up at the top of the Cedar Creek valley. 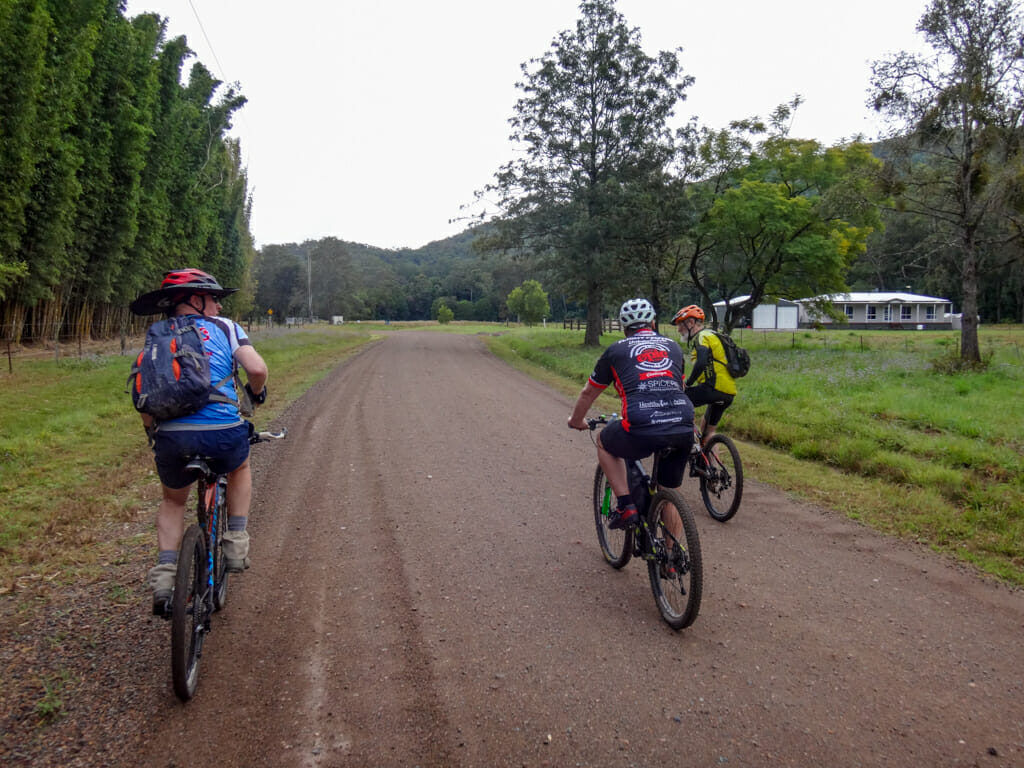 We followed this road for a few kilometres…

On a previous ride we came this way en route to some amazing views at Oaky Creek Lookout. Today, instead, we continued to the end of the road and headed towards West Cooroy State Forest. 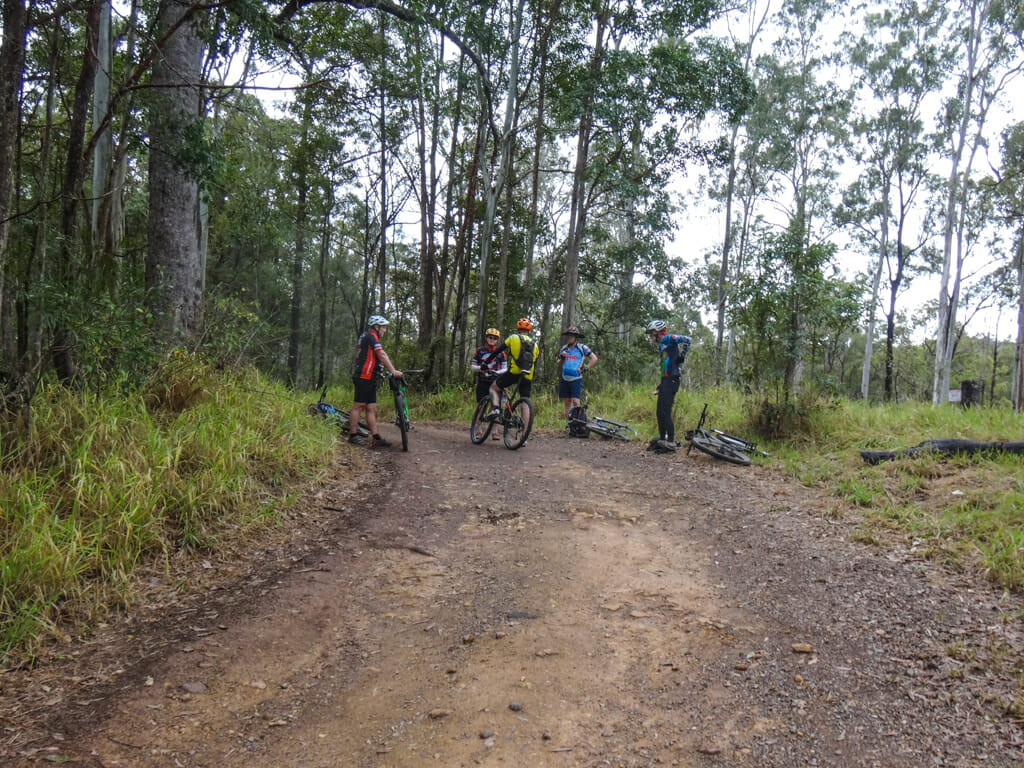 Eumundi-Keniworth Road and Skyring Creek Road are paved.  We followed them for about 1,500 metres, then got back on the dirt at Wellington Road where it entered the State Forest. 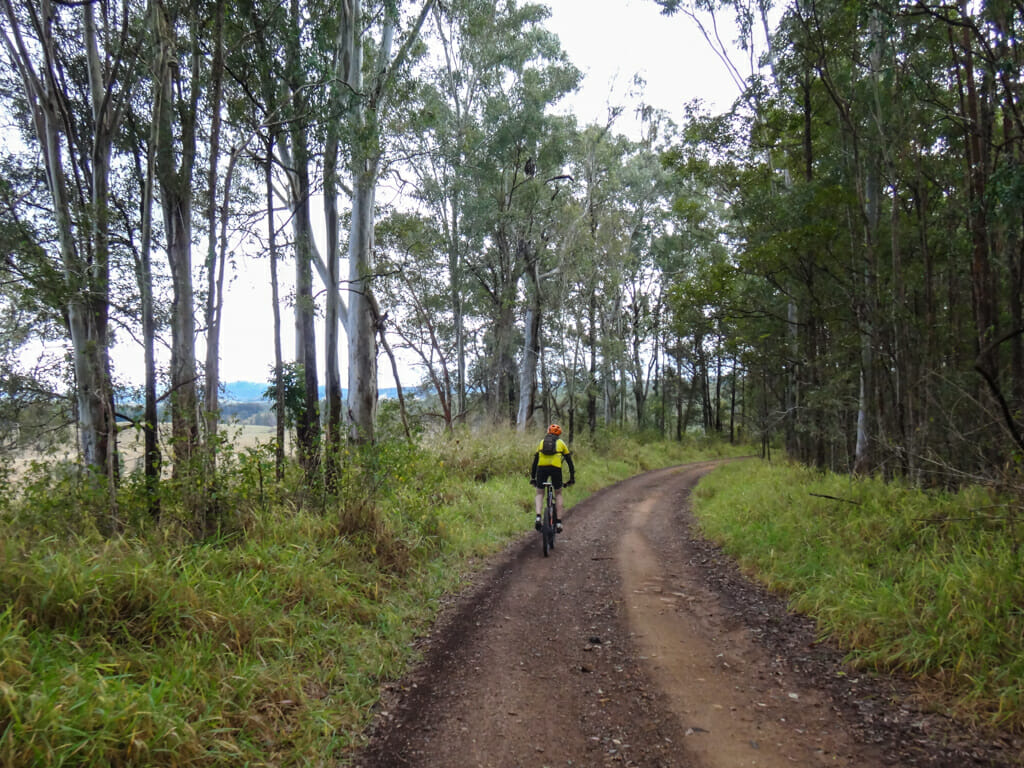 Wellington Road is a long relaxing track with farmland on one side and lush bushland on the other. 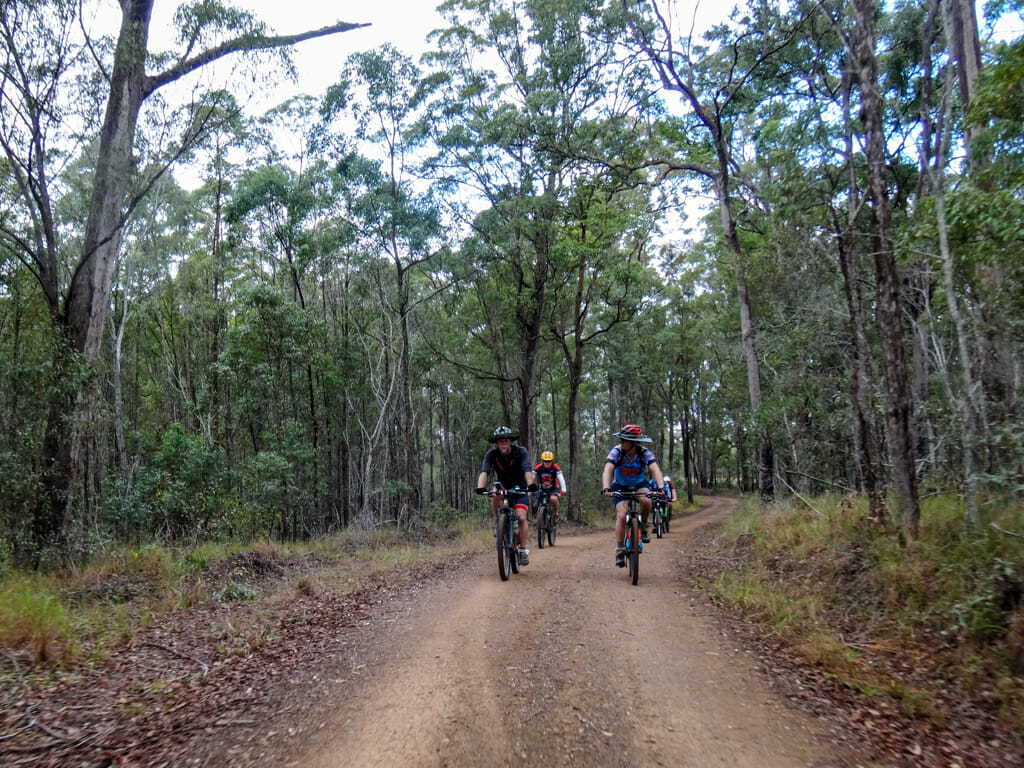 Gentle tracks like this are ideal for talking with friends while you roll along.

When we reached Top Forestry Road, there were a couple of short steep climbs.  A couple of the stronger riders managed to pedal all the way to the top.  The rest of us walked. 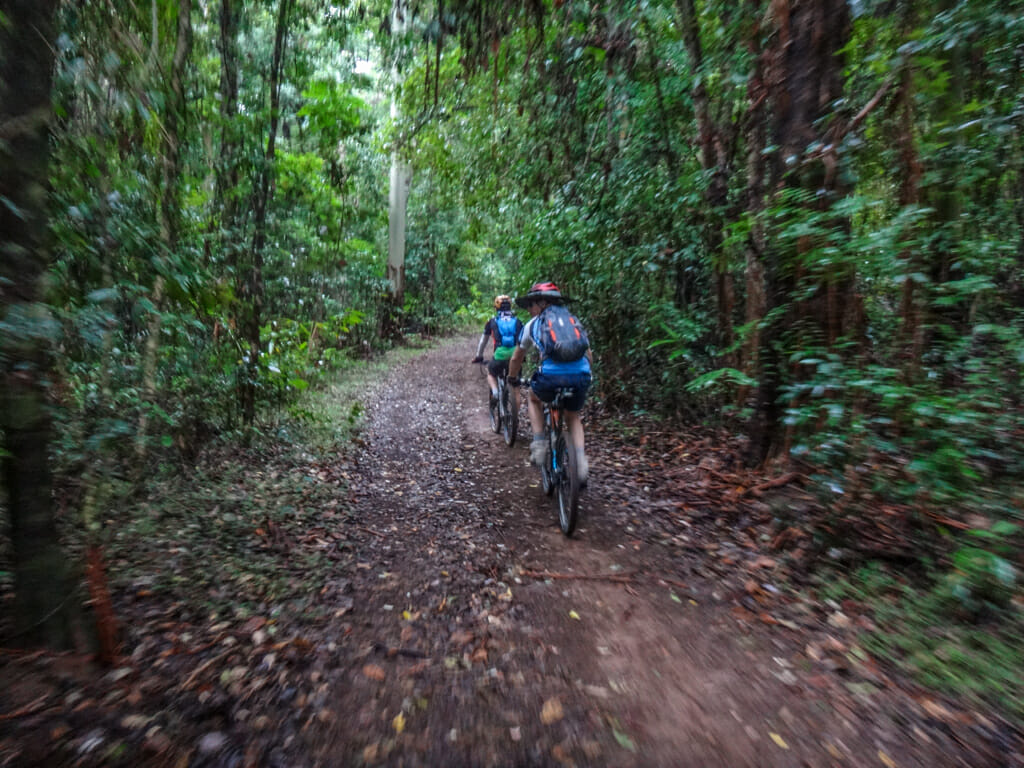 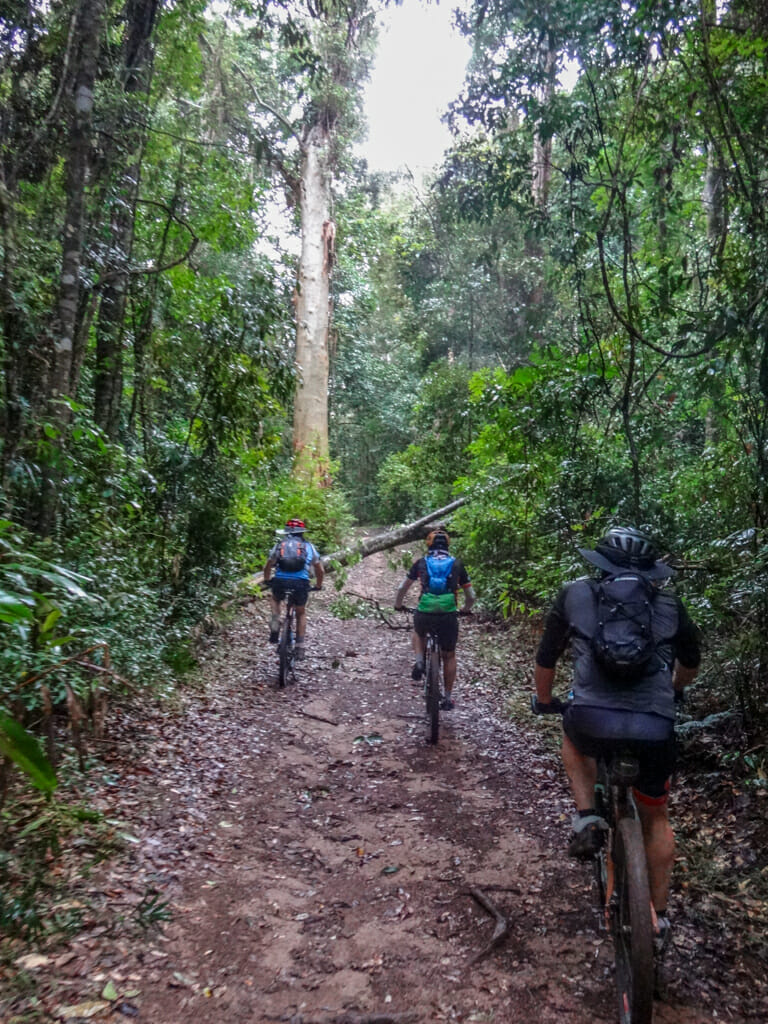 The dark green rain forest was lush after the overnight rain. We had to scramble over a fallen tree in one spot. 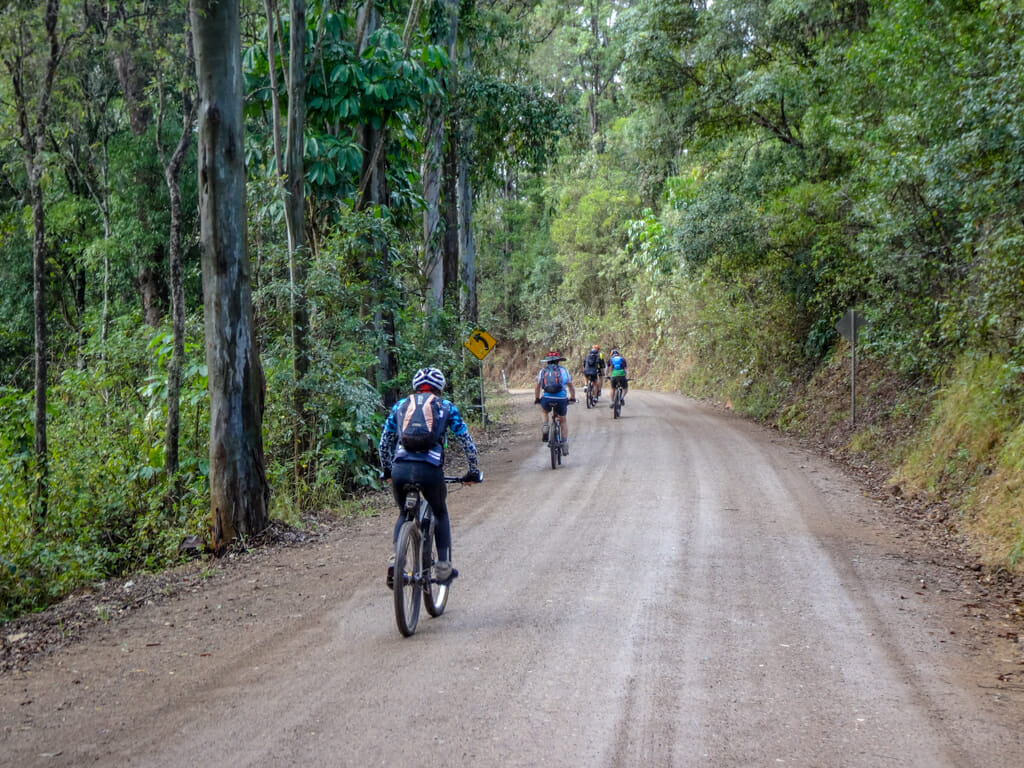 After a few kilometres, the track opened out into a smooth gravel road.  We followed it as it undulated through the forest. 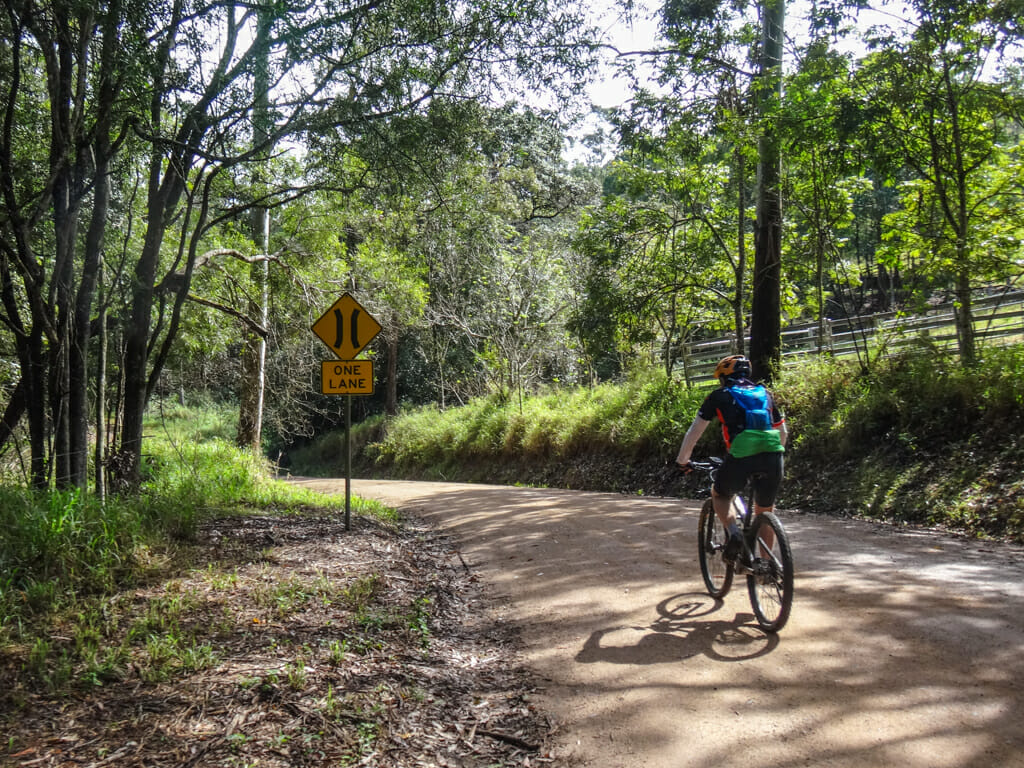 At the end of Top Forestry Road we dropped down the hill for a while, then re-entered the forest from the opposite direction, following Jorgensen Road westward. 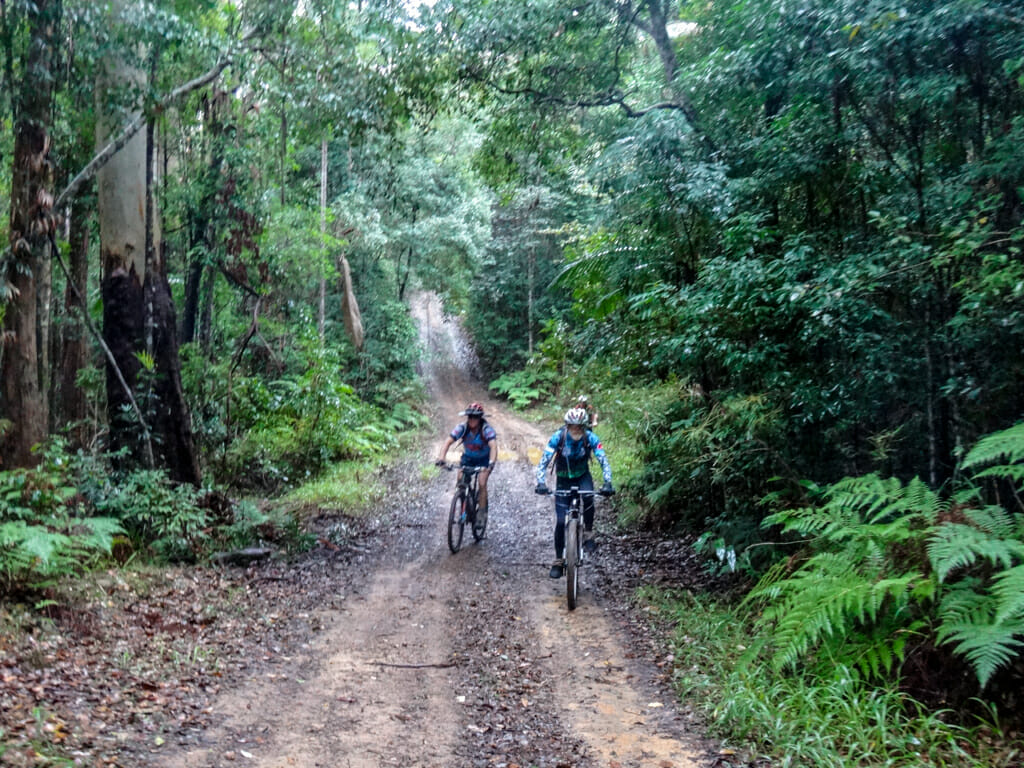 West Cooroy State Forest is on the side of a small range of hills.  This part of the forest was on the lower part of those hills, so the tracks were wetter.  We had to contend with more mud. 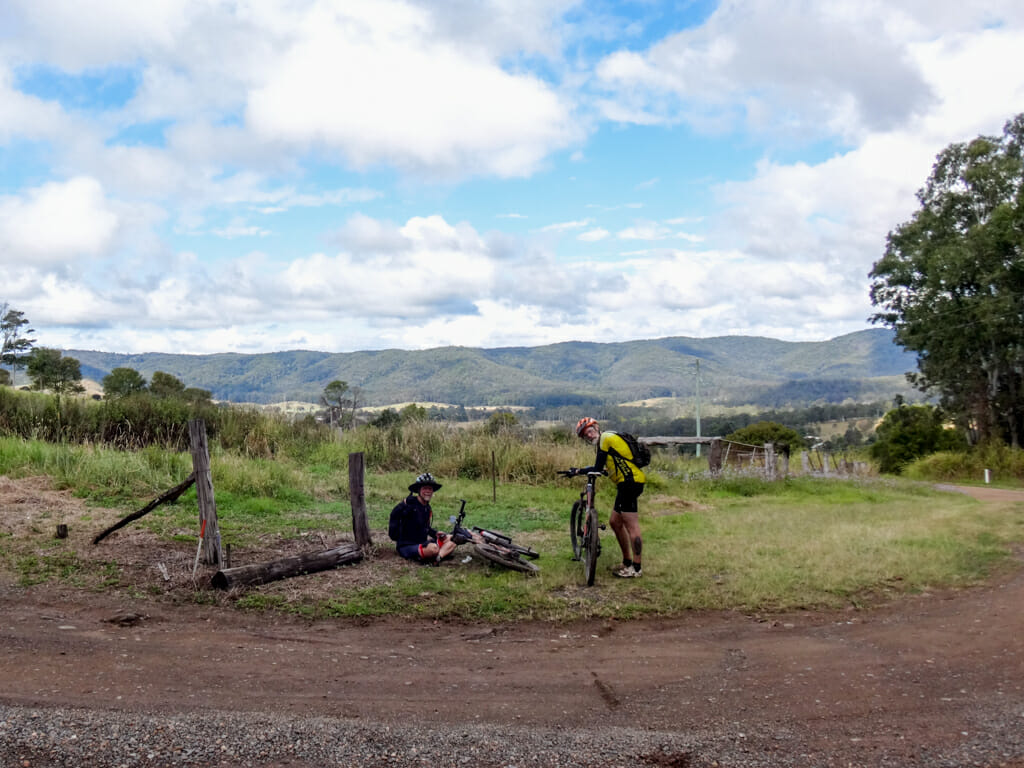 There was a short sharp climb out of the forest near Paddy Melon Lane.

We stopped for a quick break at the top of the hill.

Ahead of us lay Mapleton National Park atop the Blackall Range.  We would be making a long slow climb up those hills in about half an hour, and I wasn’t looking forward to it. 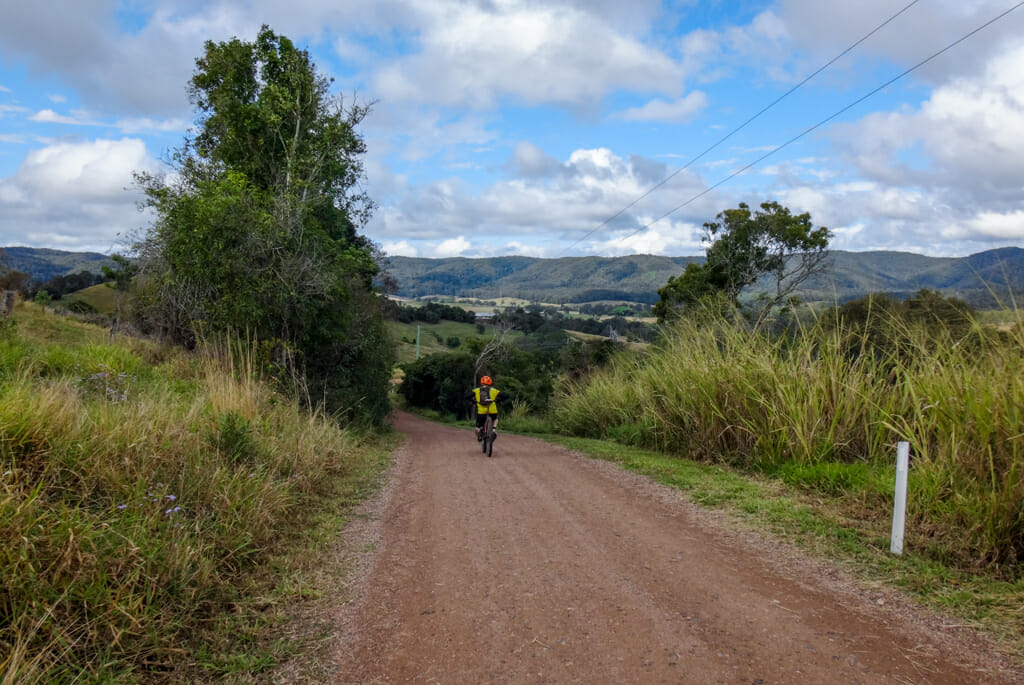 After our break, we continued down Paddy Melon Lane. 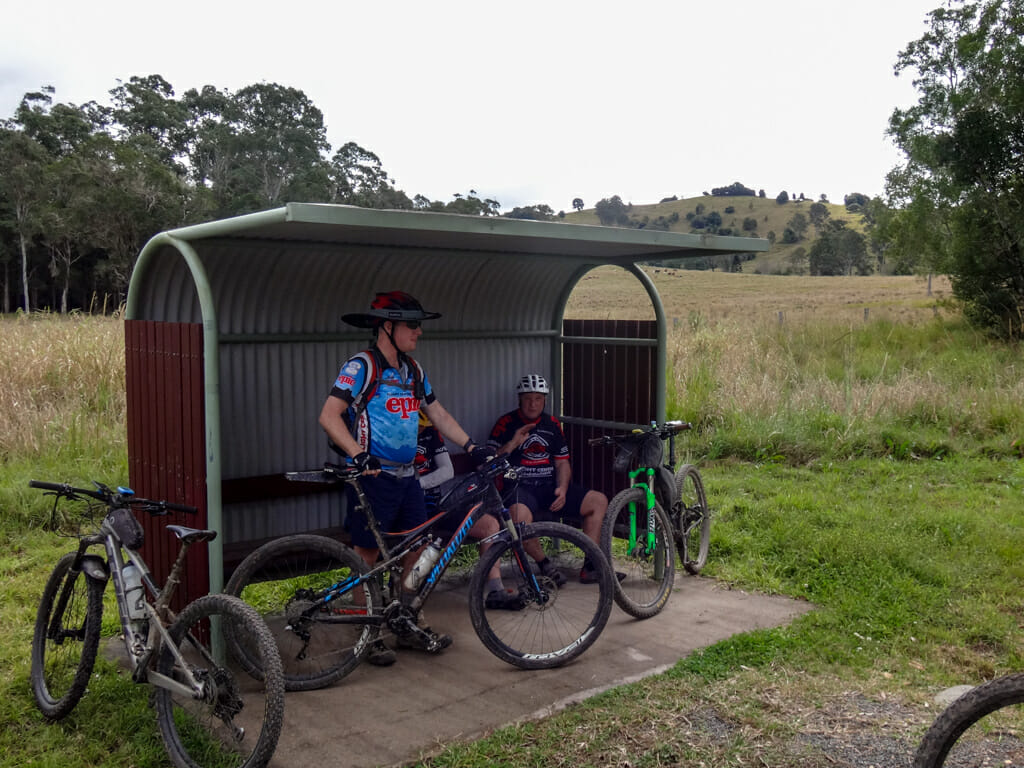 Simon and Adam were waiting for us at the Bus Stop.

“Sorry guys – the School Bus doesn’t come until Monday.  You’re going to have to ride home.” 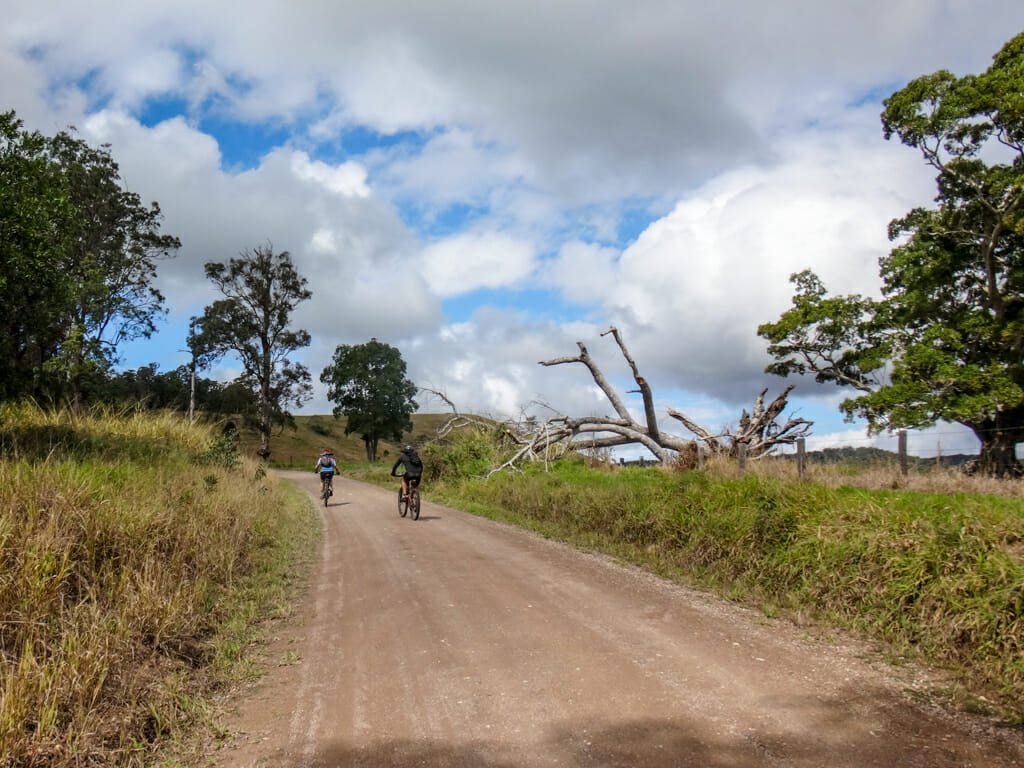 After another short stint on the paved road, we turned into Buckby Road and started our long climb back up the hill. 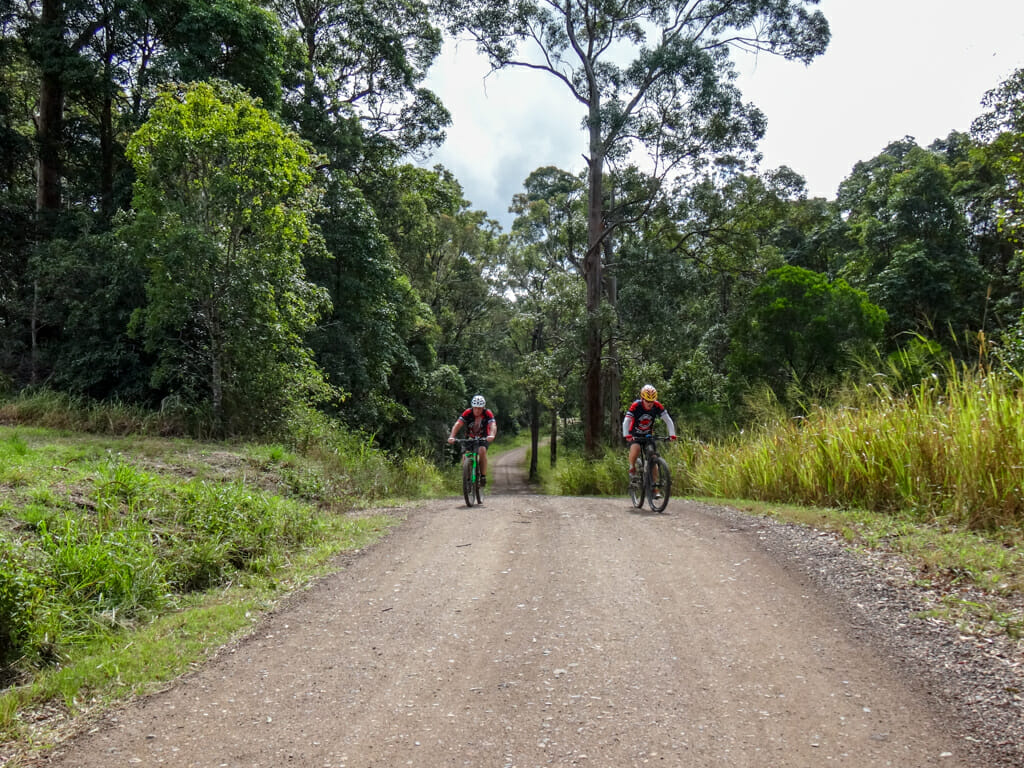 The slow grind spread us out.  The stronger riders climbed faster.  Some of us took it more slowly. 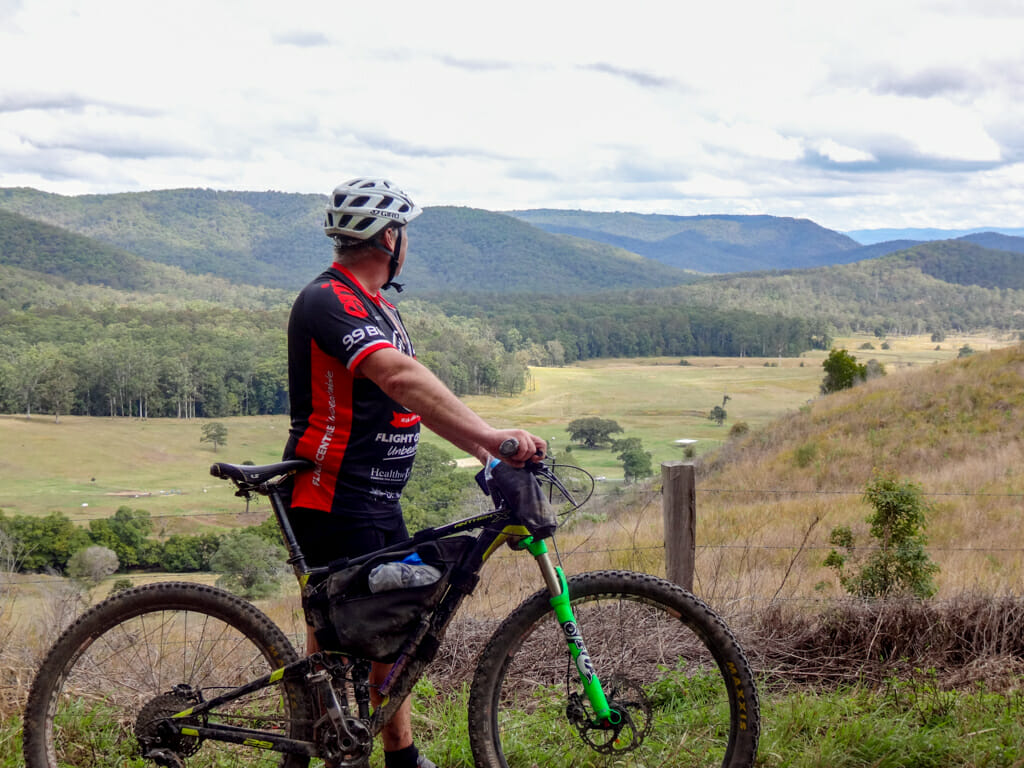 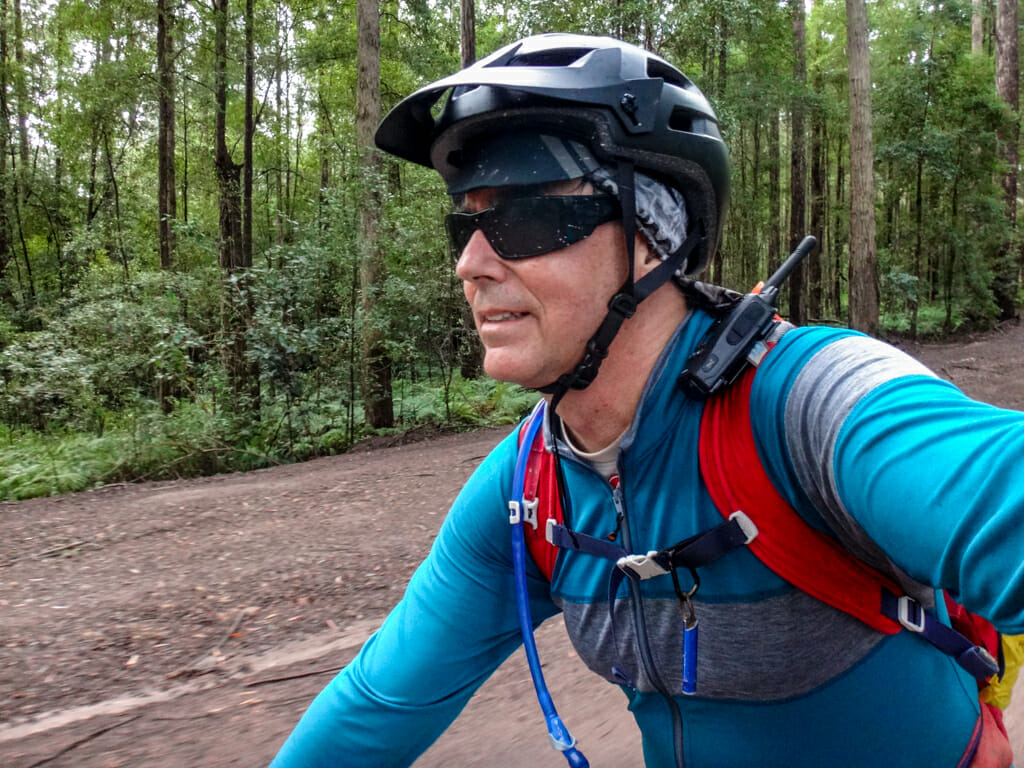 I heaved a sigh of relief at the top of Bucky Road.  The climb was over, I could coast for a while without having to work too hard. 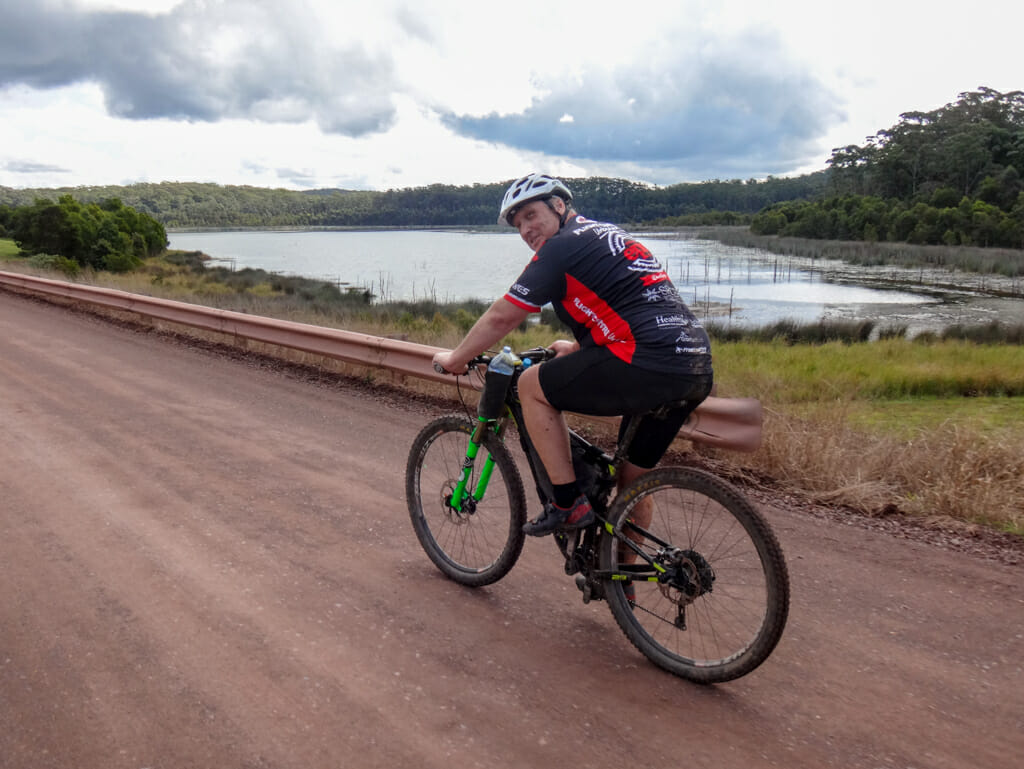 I was glad to eventually get back to the car.  It had been a huge day.

We rode about fifty-one kilometres in just over five hours.  During that time we climbed about 1,350 metres in elevation, and I burned about 3,500 kcal.

Thanks Calum, Jason, Simon, Adam, Peter and Tim for a fun day out. 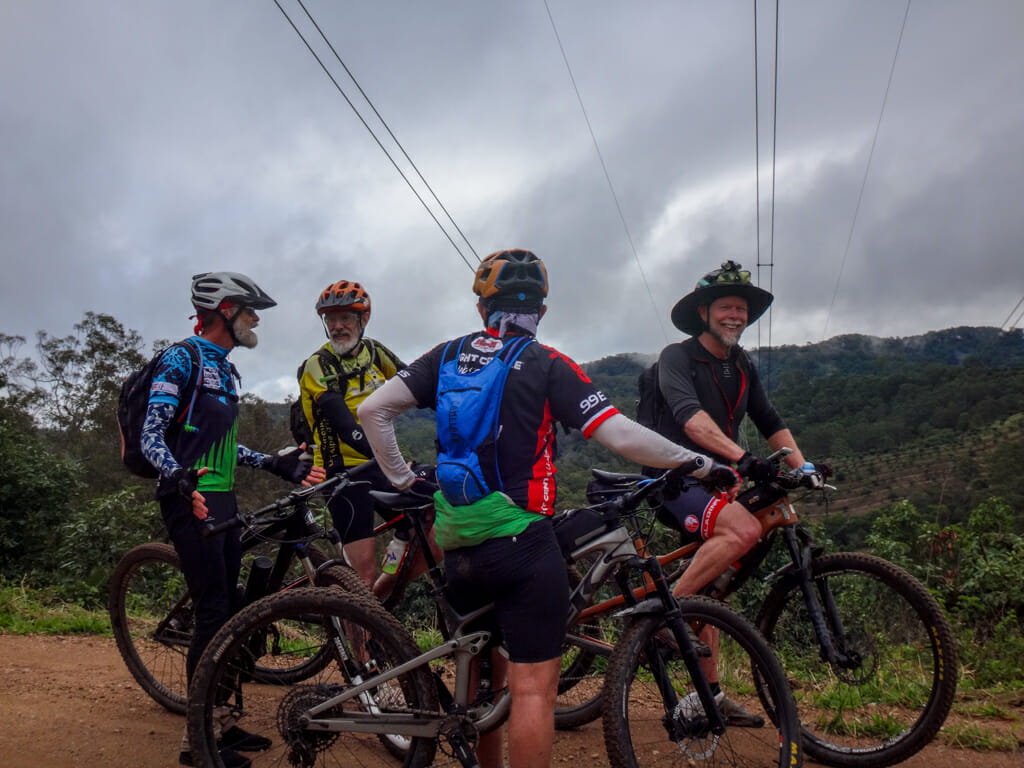