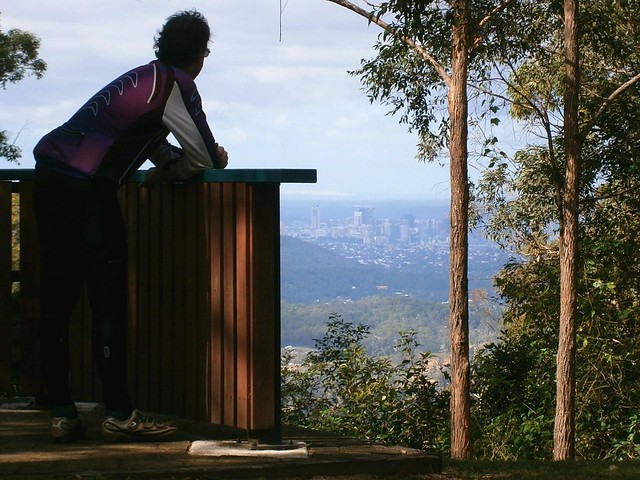 Brisbane is a wonderful city. I got to see a lot of it today in a nice big loop which covered the mountainous D’Aguilar National Park & Brisbabe Forest Park in the West, the CBD, and the Wetlands in the East. I took my time, which was enjoyable until the sun went down, and I realized I’d have to finish the last bit of my journey with lights. 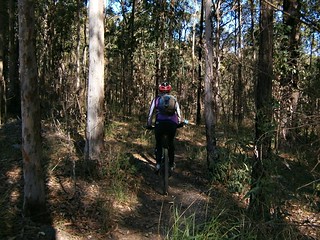 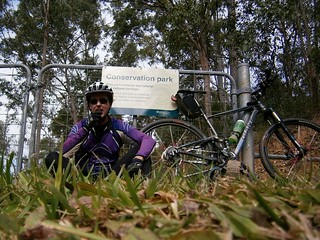 I started by exploring a few trails at Bunyaville that I don’t ride too much – “Zigzag”, “Minivan” and “Darkside”. They’ve got wierd names. Someone tells me there’s the rusting wreck of a Mini Van somewhere in there, but I didn’t see it. All I saw was lots of winding flowing tracks.

After that I took a few back streets to Samford Forest where I stopped for a quick snack. 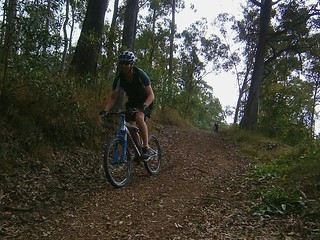 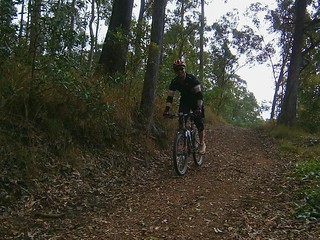 While I was relaxing, a couple of new faces showed up so I took their photos while they sped off down “Estate Break” – one of the steeper, more challenging fire trails in Samford Forest. 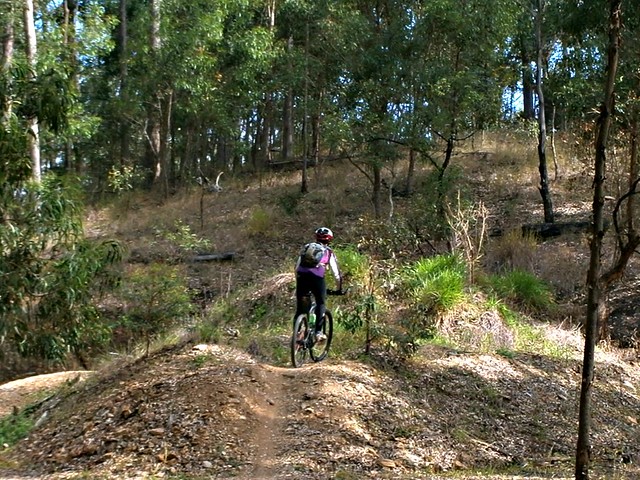 The “Three Ways” is a fun little intersection in the middle of Samford Forest with trails going off everywhere. The fun thing about it is this nice little dirt hill in the middle that you can ride over. You can’t do that at a bitumen three-ways 🙂

From there I rode over to Camp Mountain and did the tough short-climb to the summit. The climb is exhausting, which makes it easy to stop for a while at the top and enjoy the view. 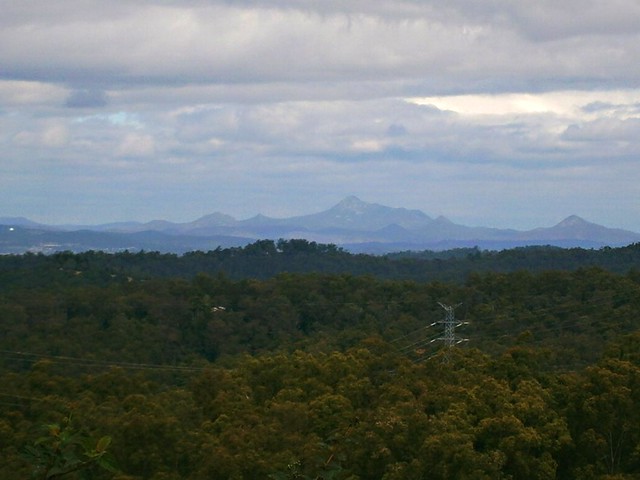 It took me about an hour to ride from there down (and up) Centre Road to South Boundary Road. It was fun to look to the mountains of the Teviot Range, including Flinders Peak and recall that I’d ridden there only a few weeks ago. At that time I managed to get a photo of Brisbane as I looked north. This time I grabbed a shot of Flinders Peak as I looked south. 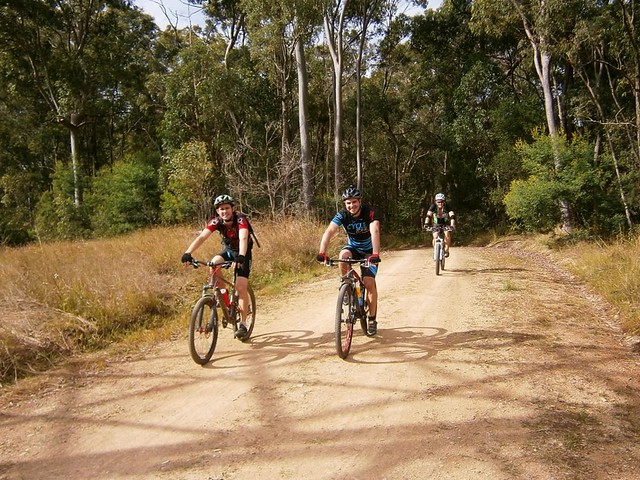 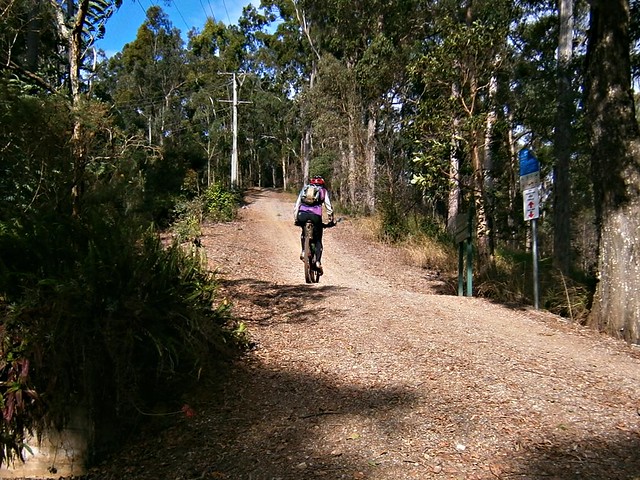 This time, when I got to the end of South Boundary Road, I followed “Goanna Trail” to the bottom, then climbed up Highwood Road. I have a love / hate relationship with this hill. I’ve climbed it several times, always after having ridden 50km through the national park, with tired legs. It’s a tough climb, especially with tired legs. But I’m always delighted when I make it to the top. 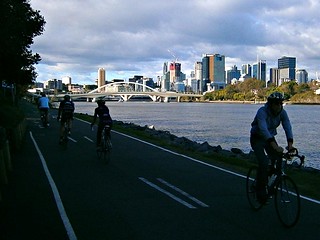 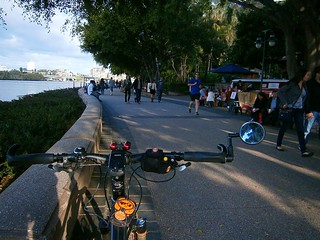 I then made the short ride from the top of Mount Coot-tha down “Powerful Owl” trail into the CBD and South Bank via the riverside Bicentennial Bikeway. 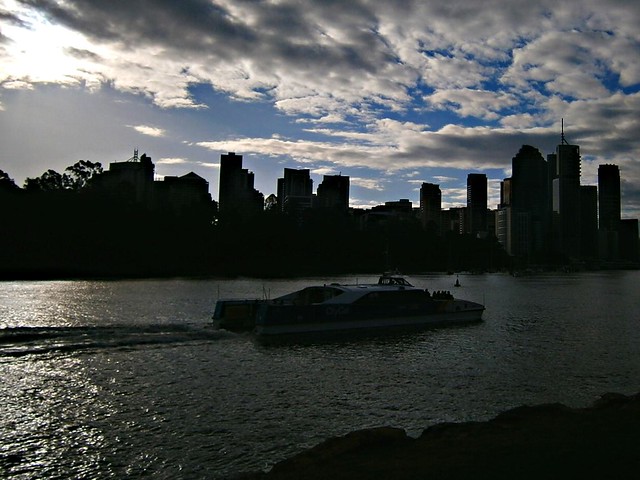 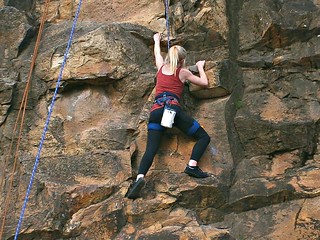 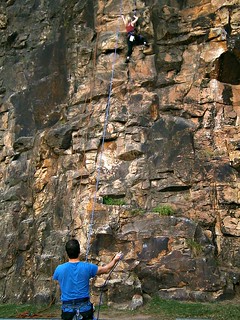 There was lots of activity by the river, including these rock climbers at the Kangaroo Point cliffs. 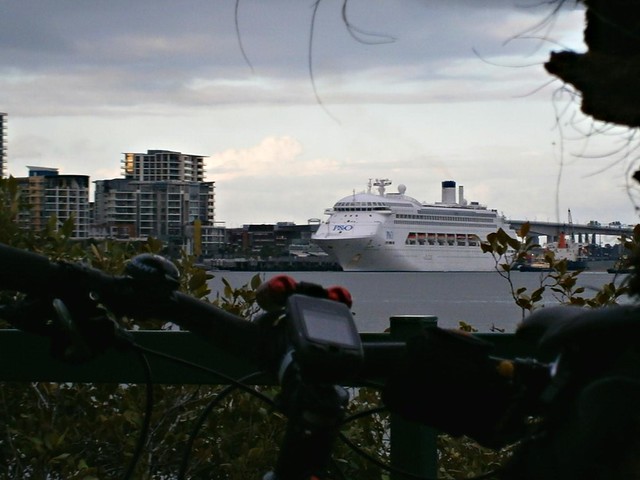 On the way out of Brisbane along Kingsford Smith drive I was lucky enough to get a great view of P&O “Pacific Dawn” leaving port for a week in the Pacific. She blew her horn while I was watching, which sounded loud – even from over a kilometre away. In the past I’ve always felt envious watching a ship leaving port, wishing I was on board. This time I felt much happier riding my bike. If they’d stopped the ship and asked if I’d have liked to hop on for a cruise, I would have graciously declined.

I’m content to ride my bike in the bush.

2 Replies to “From the Mountains to the Sea”