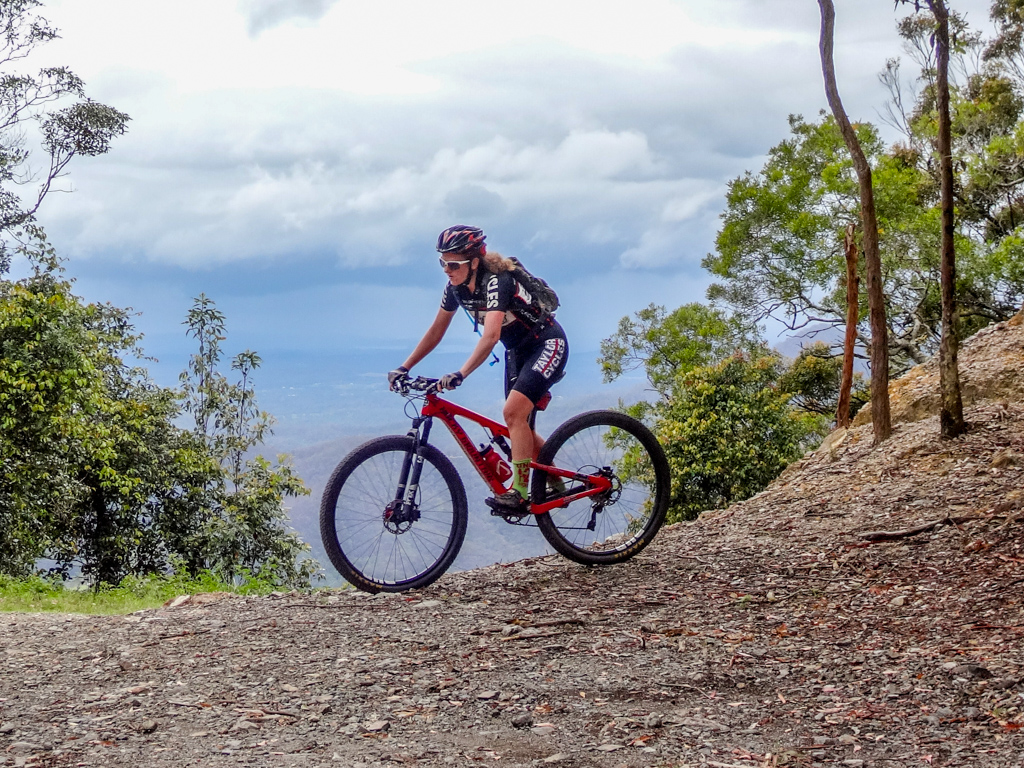 “Everesting” is a fascinating challenge for cyclists, and one that my friend Rebecca would like to try. Thankfully, it doesn’t require riding up Mount Everest, but it does demand some huge hill climbs. Today we checked out a big hill in the D’Aguilar Range for Rebecca. 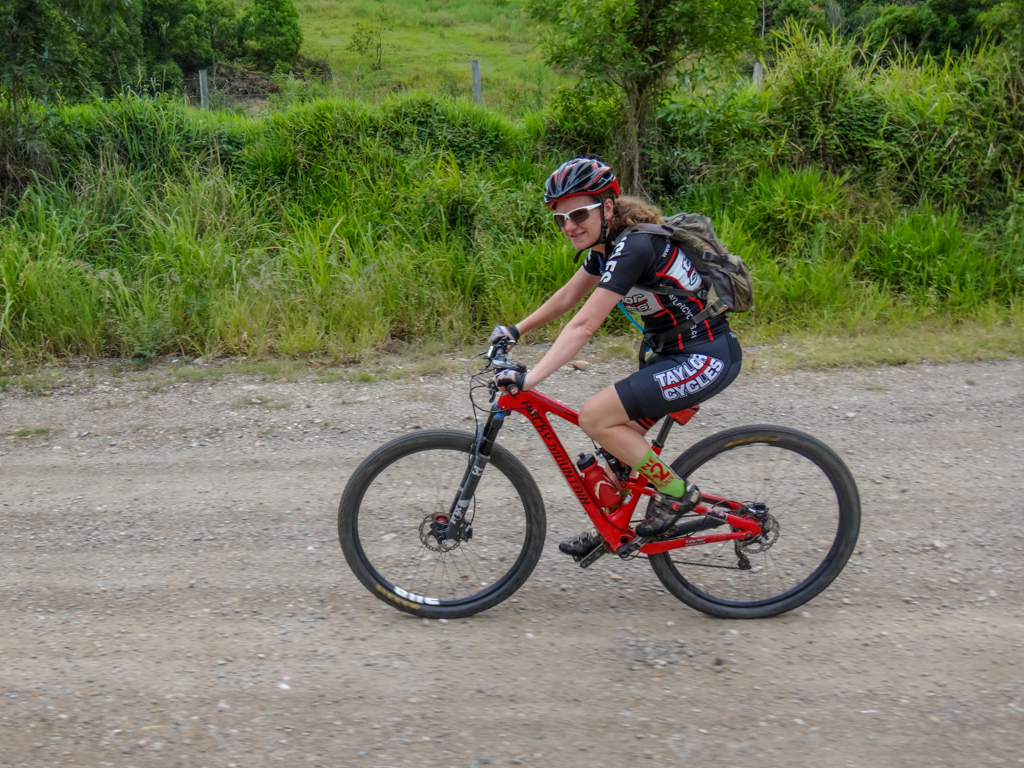 Mount Everest is 8,848 metres high. Rebecca wants to climb that far vertically by going up and down the same hill a lot of times. She asked us if we could suggest any hills that might be good to “Everest” on. 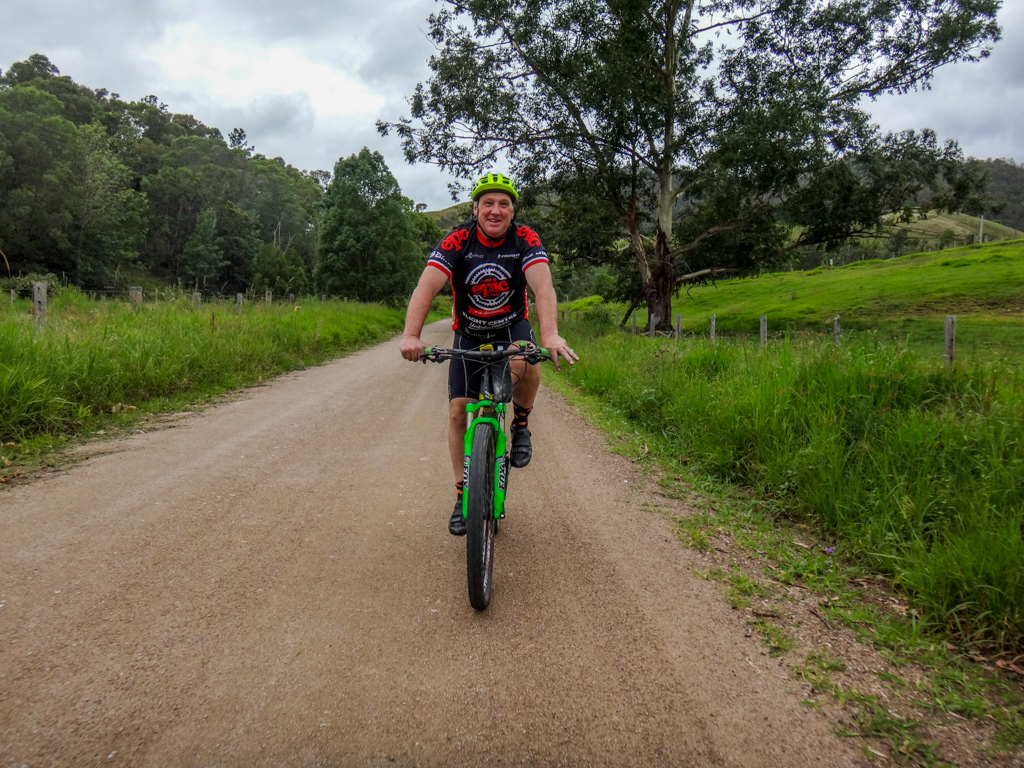 Mortals like Simon and I don’t climb Everest every week – but we were eager to ride up the big hill at least once with our friend. If she liked the hill, then maybe we could return at a later date and be part of the support team or cheer squad?

So we decided to take on Kluvers Lookout, high in the northern section of the D’Aguilar Range. 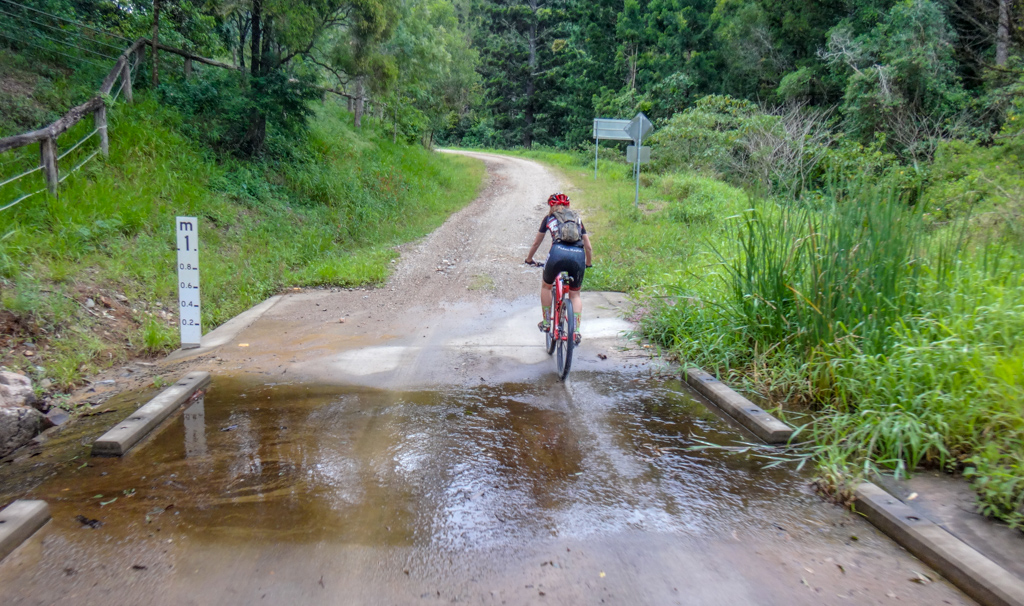 There was no climbing for the first kilometre as we followed May Creek up a narrow valley. 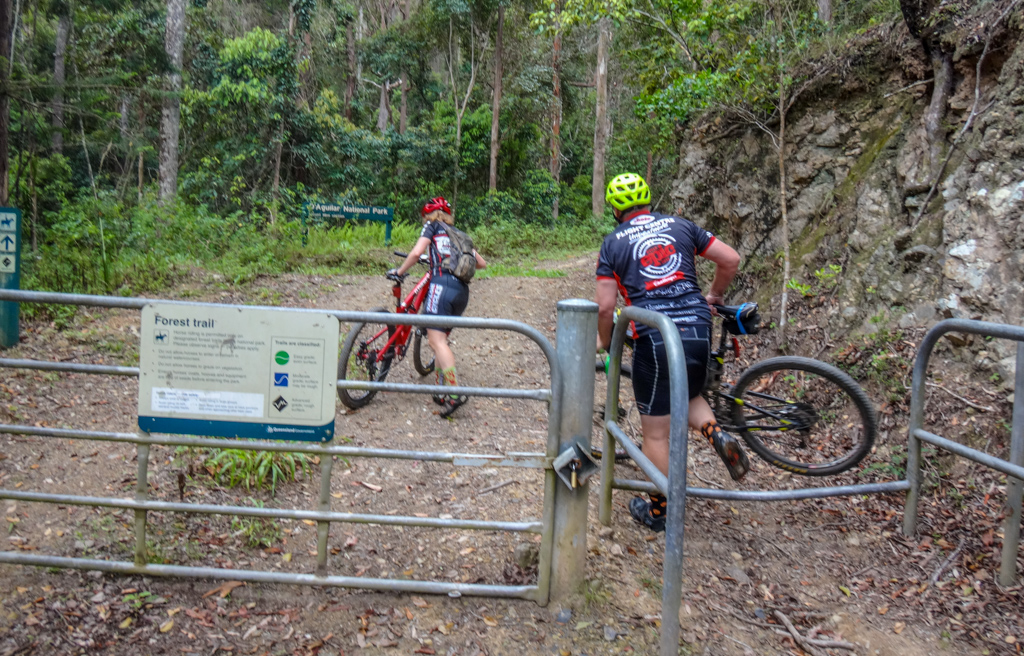 When we reached the national park gate, I made a note of our elevation so far. I wanted to know how high we would have climbed when we got to the top. Divide this number into 8,848 (the height of Mt Everest) and this would be the number of times Rebecca would need to climb the hill. 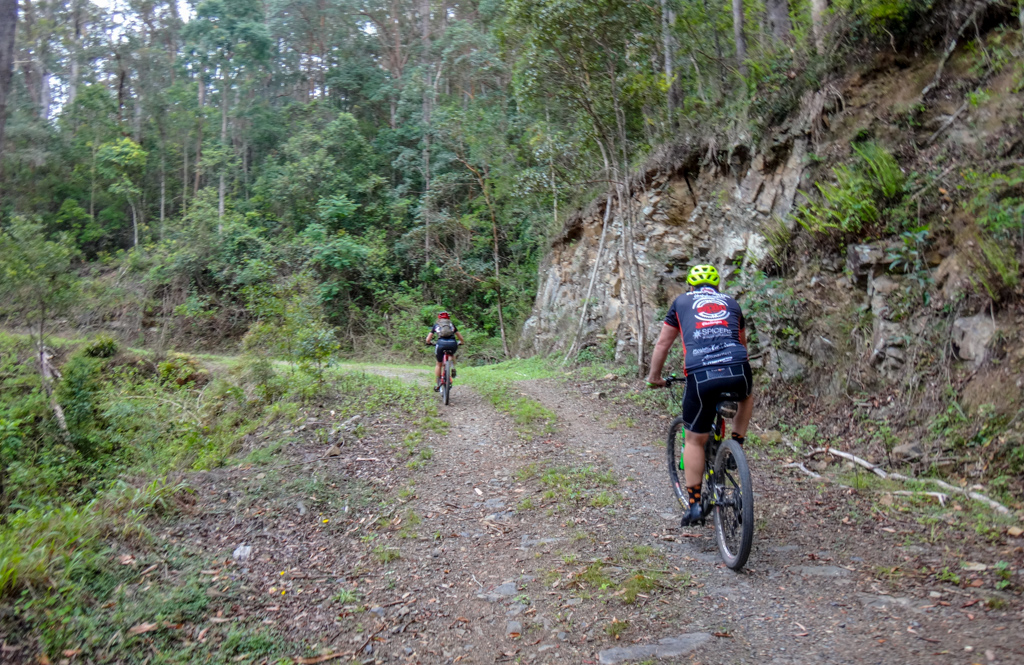 The three of us set off up Wirth Road at a moderate pace. Russel and Gail had left twenty minutes earlier, and we were eager to catch up with them.

Rebecca slowly eased ahead of us – she was quick. 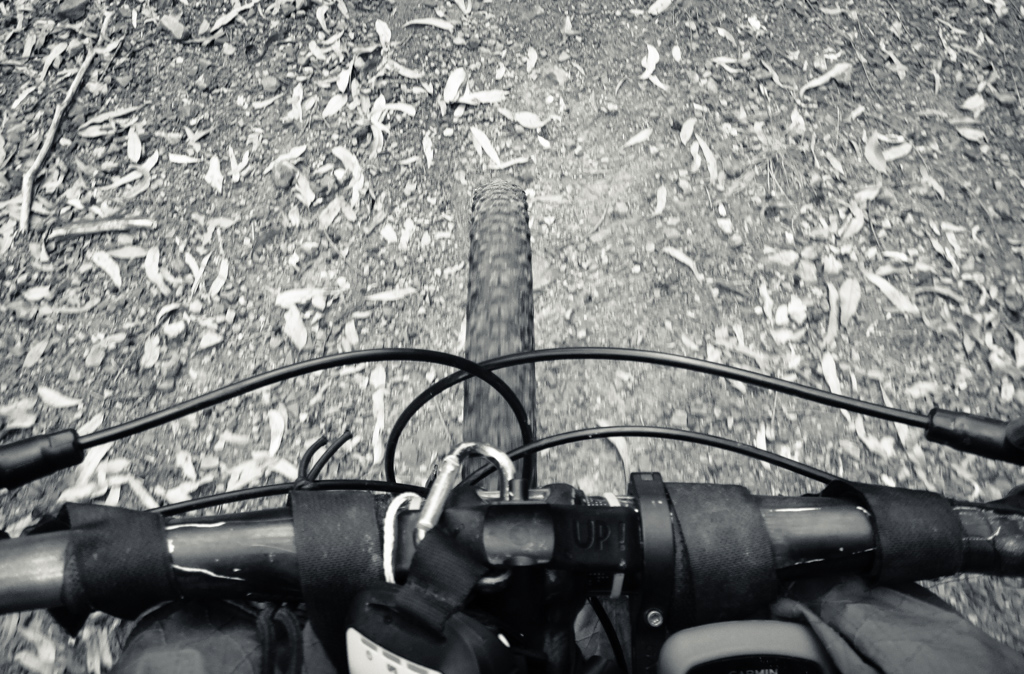 Hill climbs are often more of a mental battle than physical. I looked down at my front wheel and settled in to a slow and steady rhythm.

I was alone – Becca was way ahead of me, and Simon had dropped behind. Strange “ear worm” songs filled my head in time to the pedals turning.

If Becca decided to “Everest” this hill in future, she’d need to climb it sixteen or seventeen times. I wondered what strange songs would fill her head while she scaled those heights. 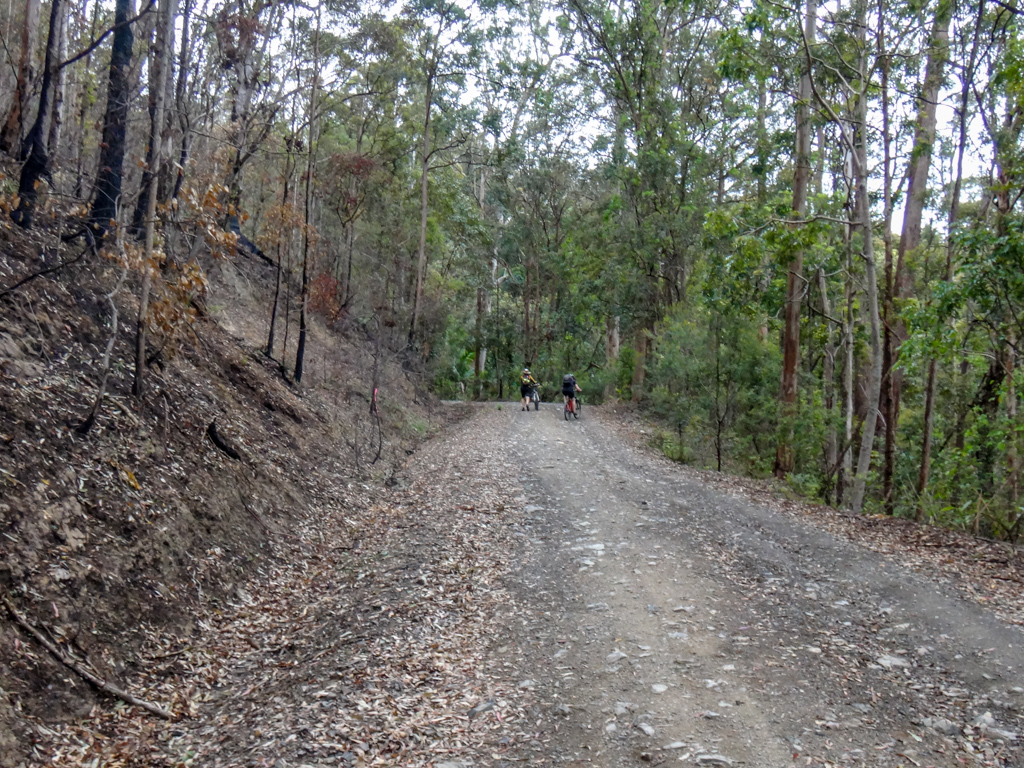 The songs in my head faded as I spotted Russel and Gail ahead. I smiled smugly to myself – I’d caught up. 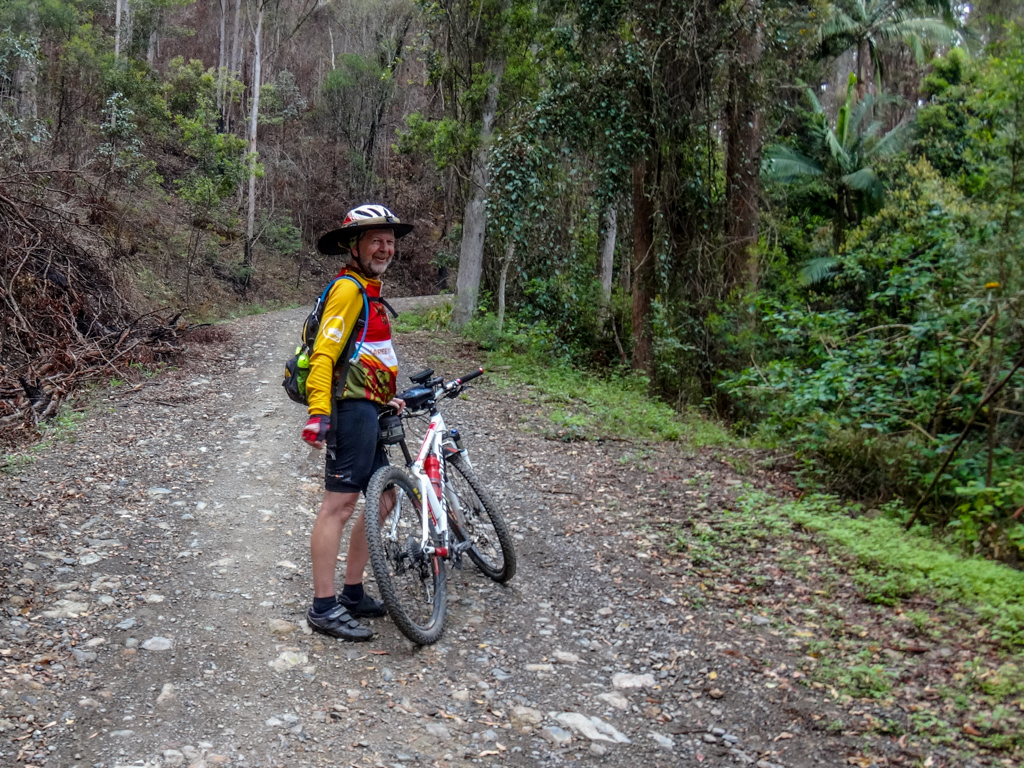 Russel was recovering from tendonitis he’d suffered from recently riding almost four hundred kilometres on “The Big Ride” from Ipswich to Gympie. He was kind to his legs on the hill and walked some of the way rather than pushing his legs too far. 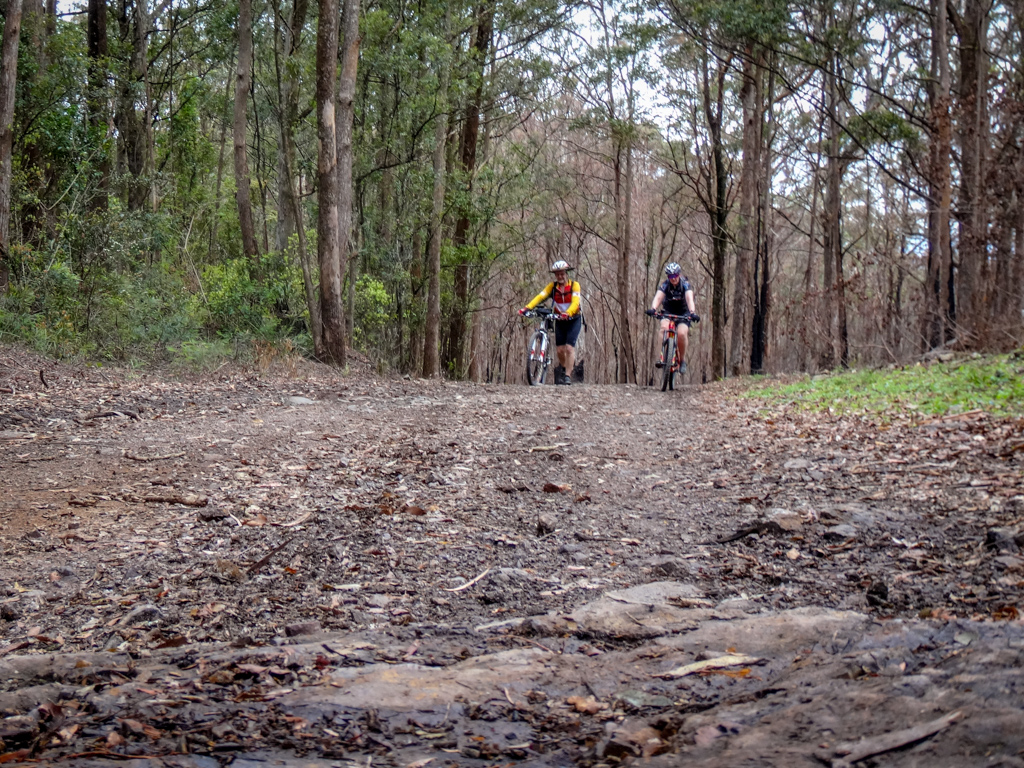 Gail did what any good riding buddy would do… 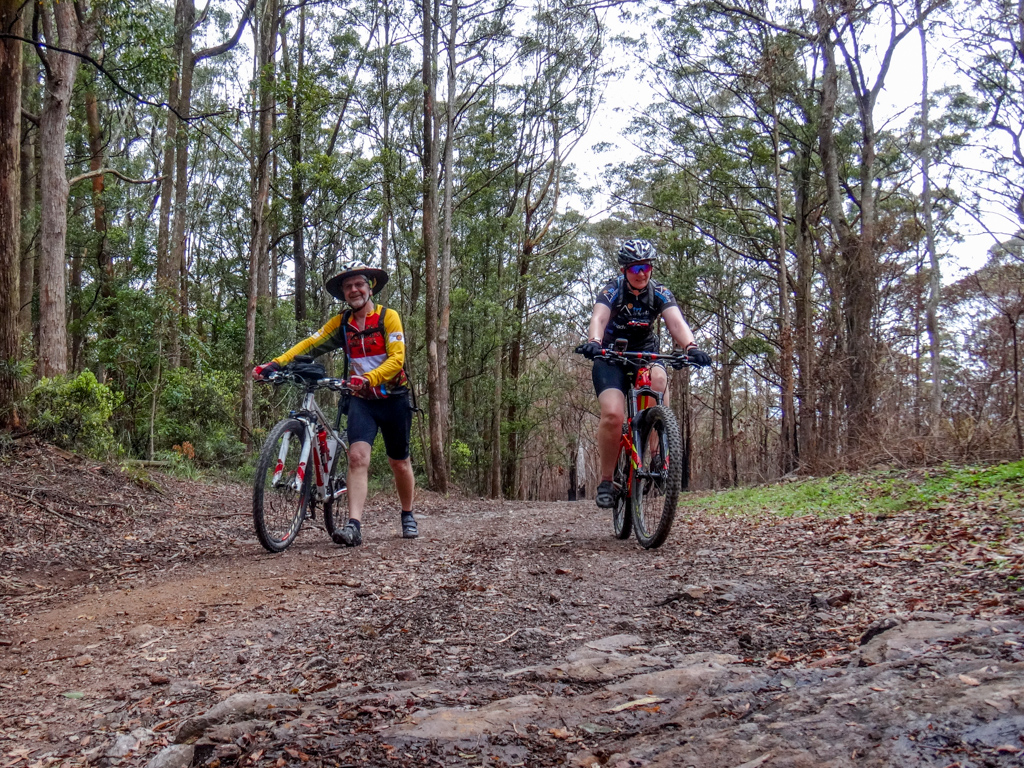 …she rode slowly beside Russel so he didn’t have to walk up the hill alone. 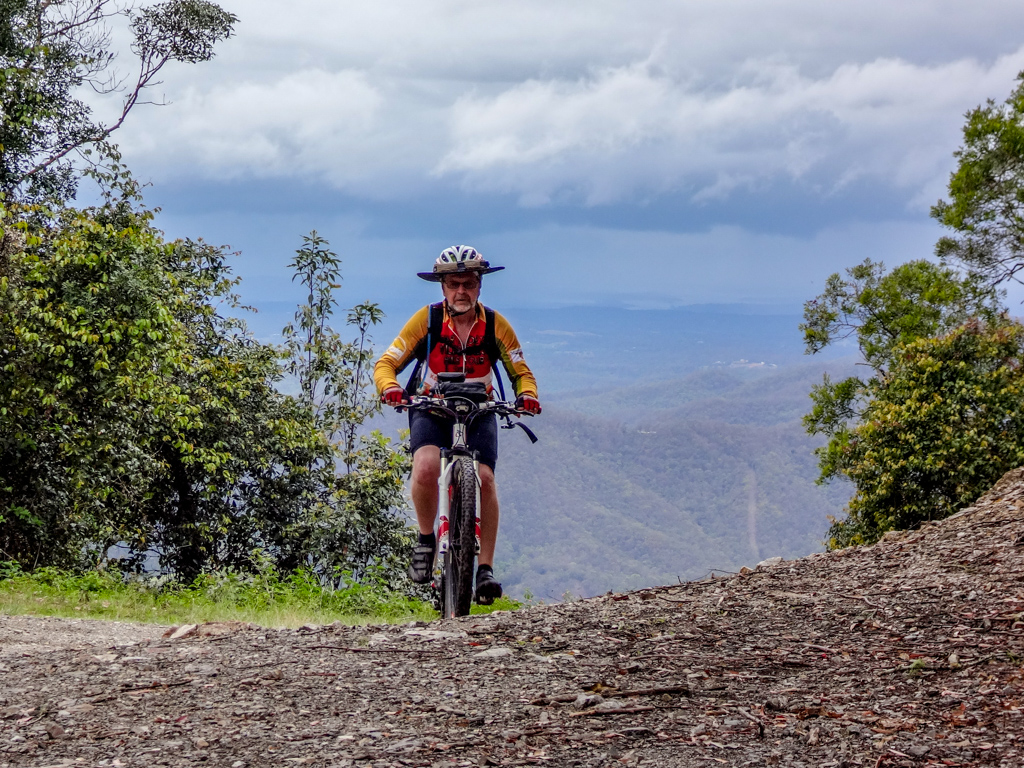 After about an hour we reached the top.

Tree-covered hills rolled eastward below us, stretching towards Moreton Bay like a big green quilt under a brooding sky. 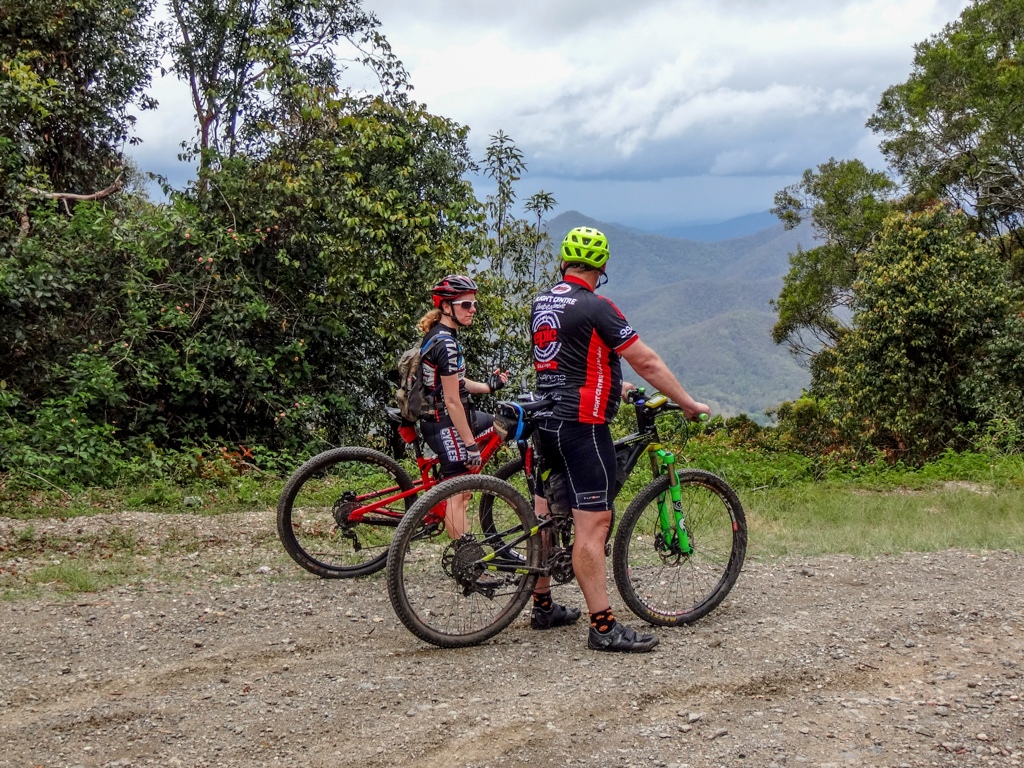 We took a few minutes to enjoy the view.

“If you started from the National Park Gate, you’d gain six hundred metres in elevation to get here,” I told Becca.

“That means you’d need to ride it about fifteen times.”

That seemed huge to me. In a few months time Rebecca would try to ride up and down this hill repeatedly for the better part of a day. She didn’t seem phased by it. 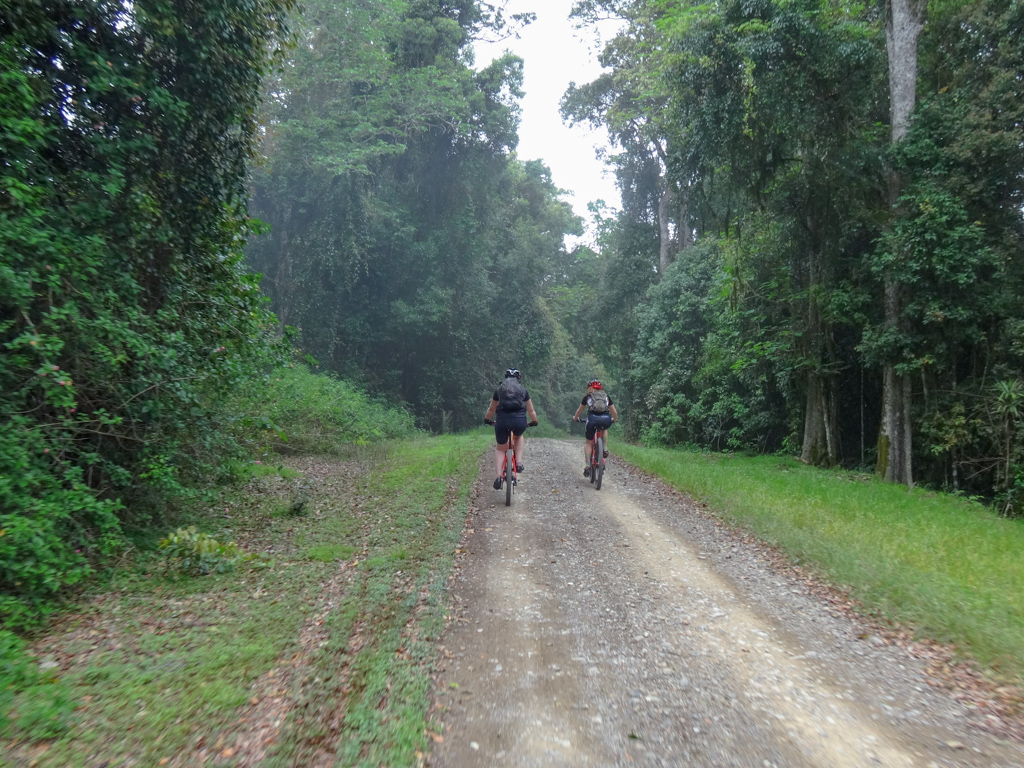 As we rolled down the other side, low clouds drifted in. 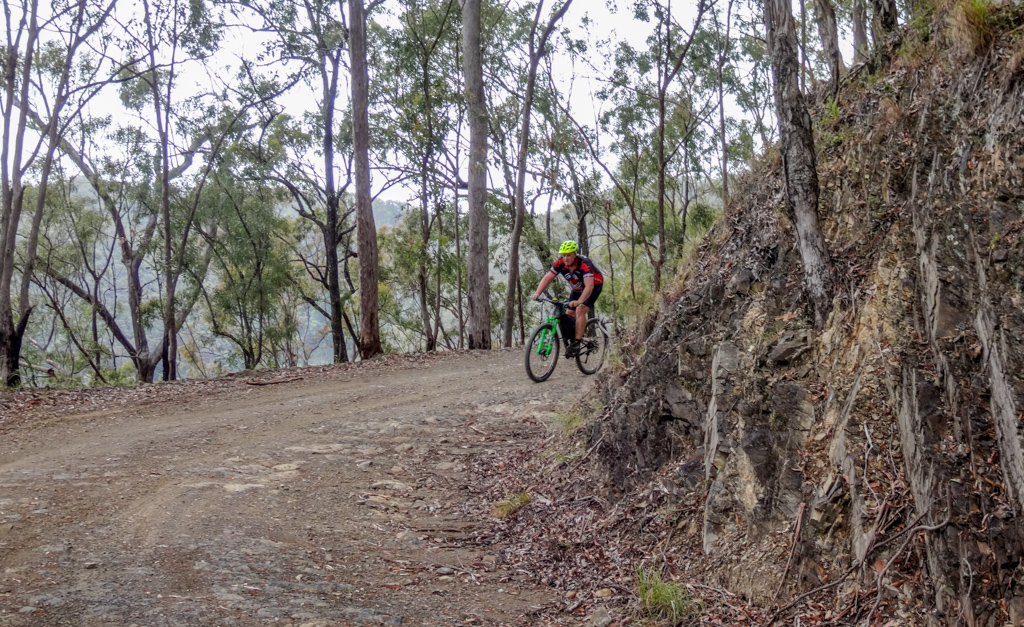 This is a picturesque ride, not just for super-humans. The views are great. 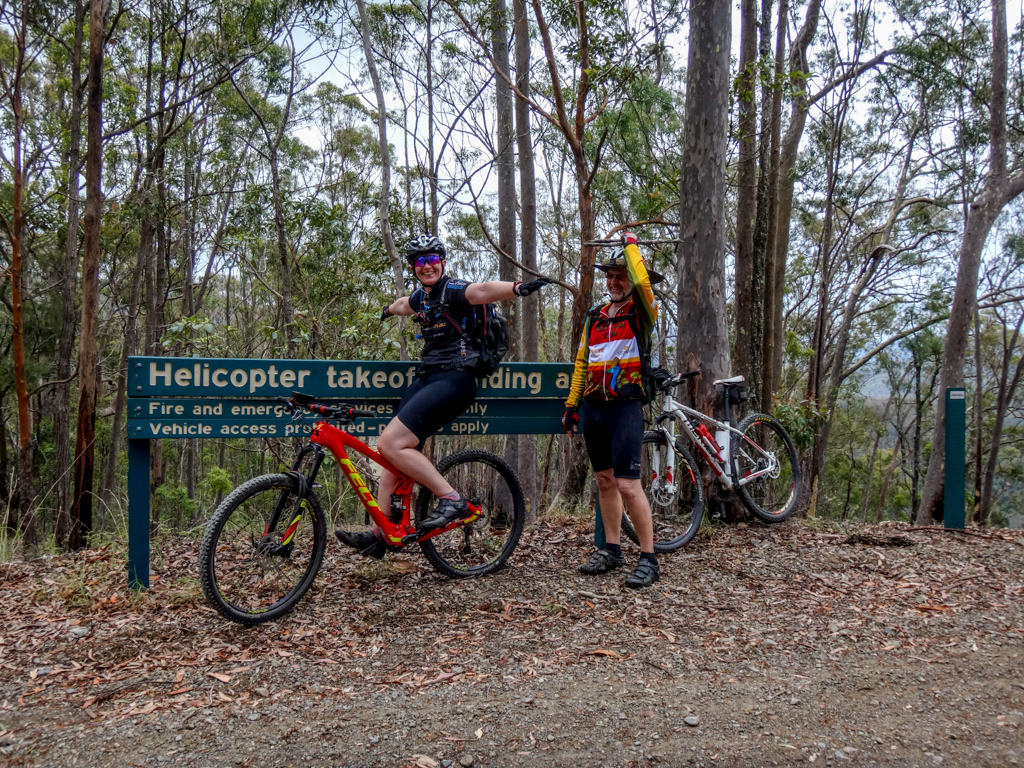 At the helicopter pad, Gail pretended to spin her “rotors”. Russel held on to his hat to stop it blowing away. Choppers can cause unexpected strong gusts. 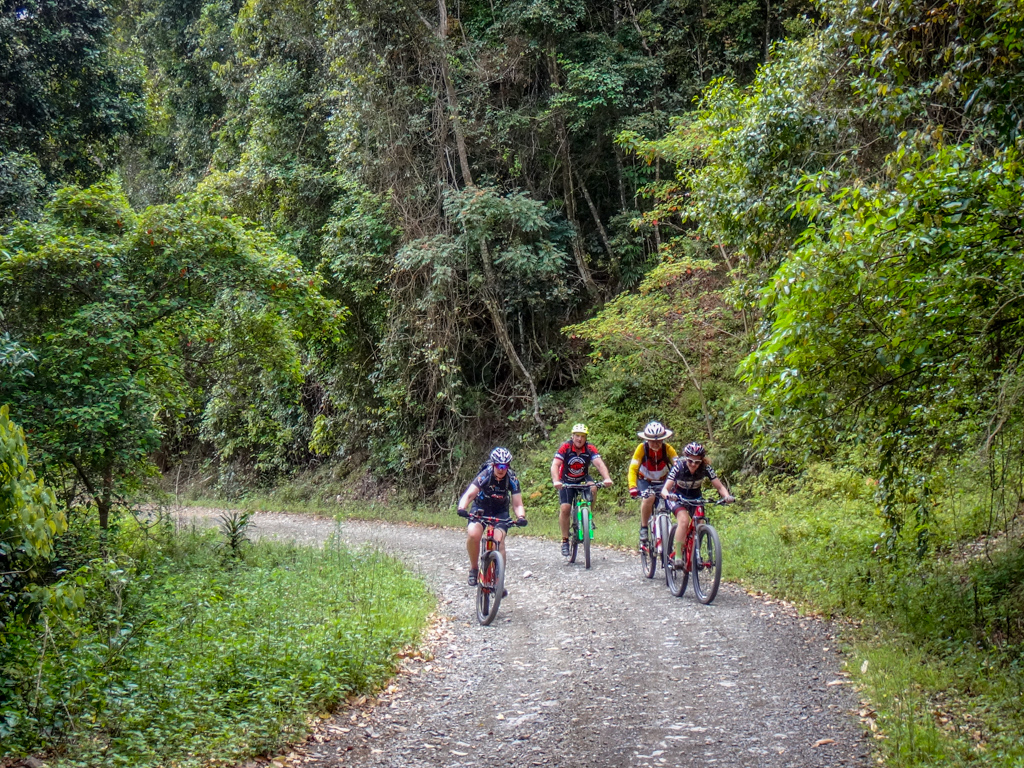 The road rose and fell.

This was good. It kept us together. It allowed us to roll at a leisurely pace and chat about anything. It was like sitting on the back porch with friends. 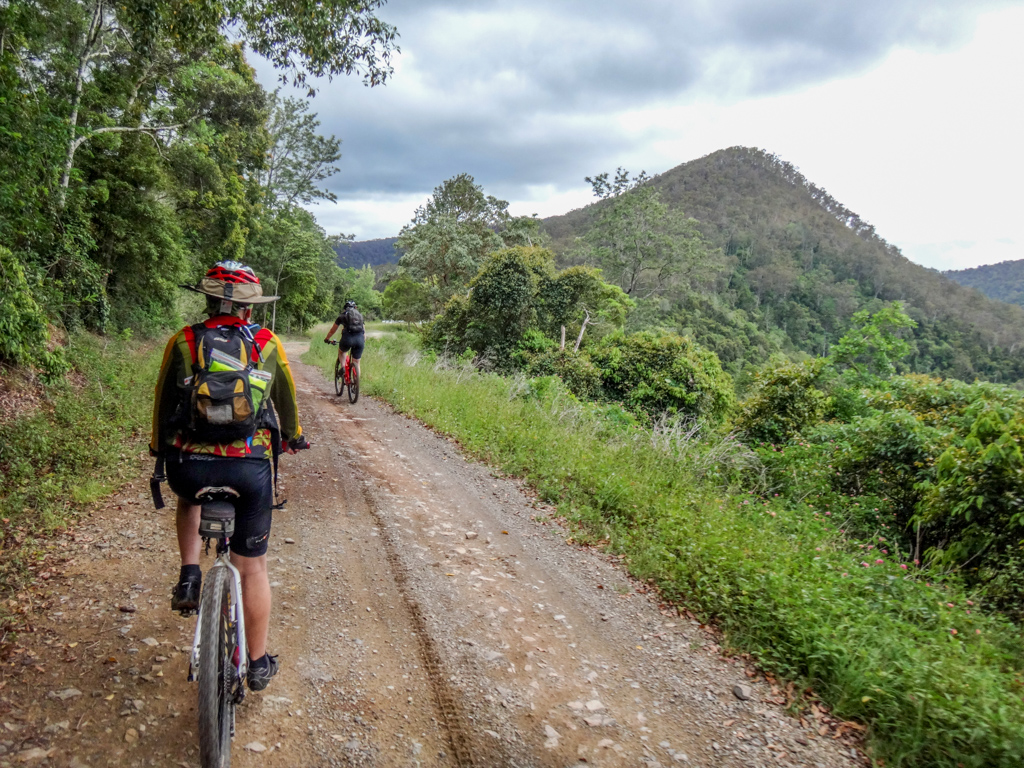 “The Bulls Knob” loomed ahead. This rounded peak marked the southern-most point of the ride. It was time to turn left and roll down the mountain. 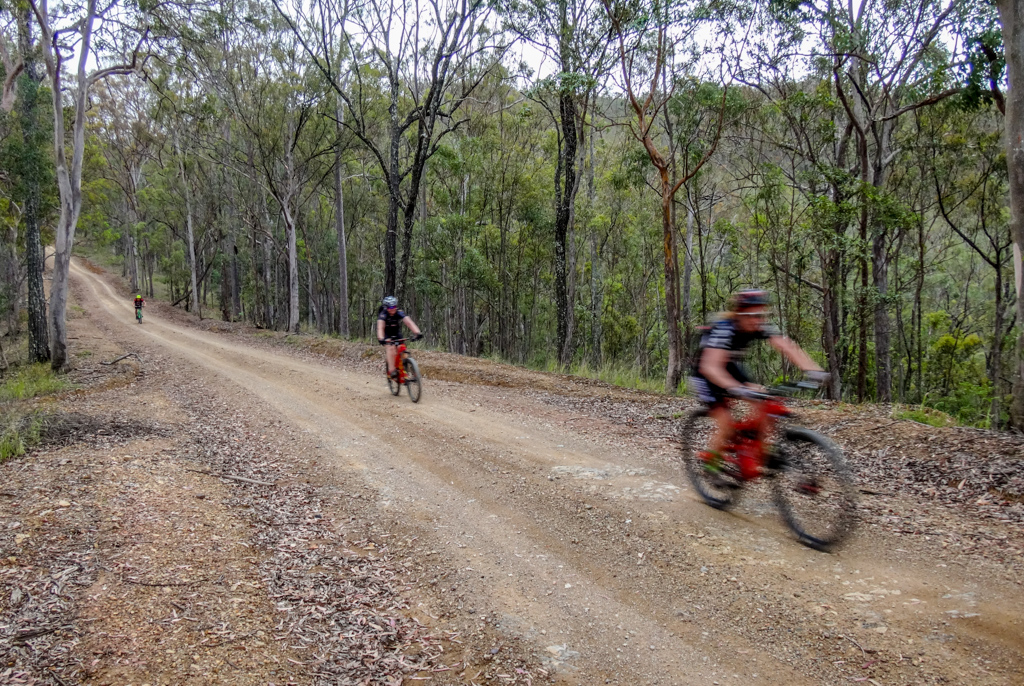 When you release the brakes on Laceys Creek Road you descend very quickly.

The trees blurred as we accelerated down the hill. 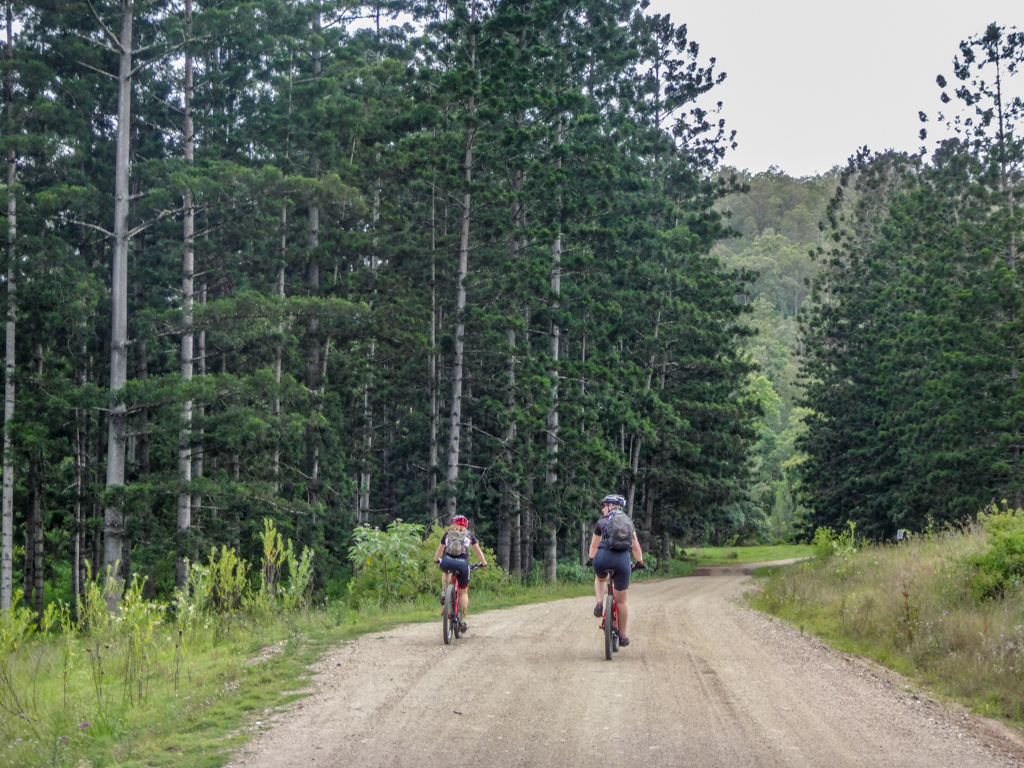 A short time later we rolled through a grove of Hoop Pines at the bottom of the range.

Big hills distort time: So long to climb them, so quick to descend. 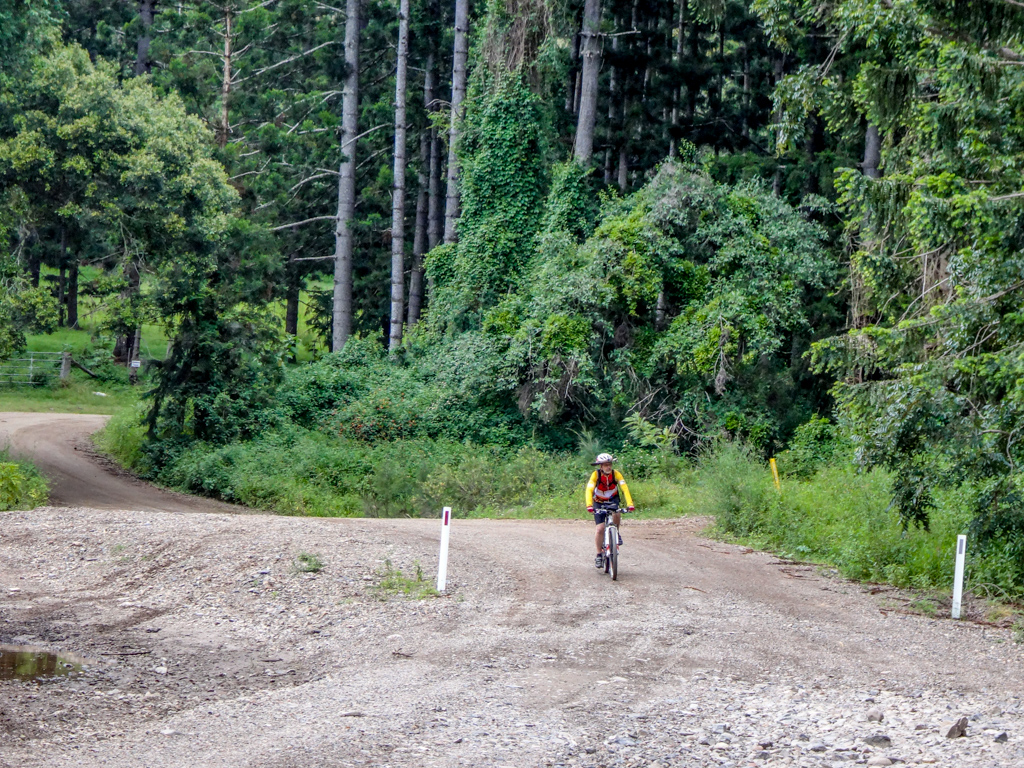 Laceys Creek often floods the road here. Today we were fortunate and were able to ride through a dry creek bed. 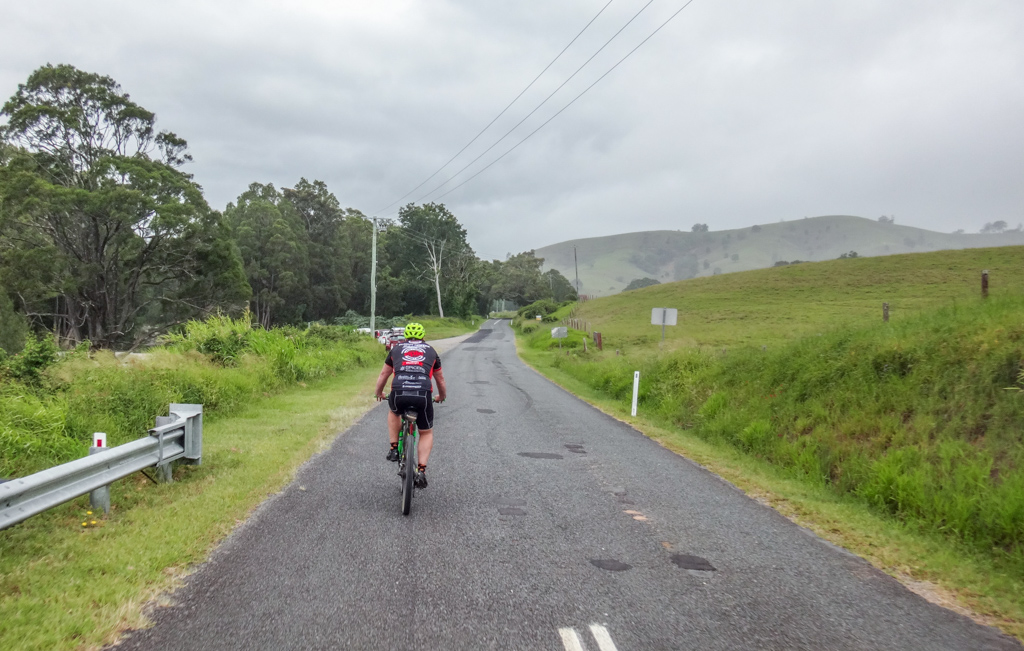 The humid drizzle of early summer rain started to spray us as we arrived back at the cars.

This was a short ride.

We rode just over twenty kilometres in about two and a half hours.

During that time we climbed about one thousand metres in vertical ascent. Fluctuating air pressure reduced the accuracy of the elevation readings of my GPS, which understated the elevation.

Thanks Becca, Simon, Russel and Gail for a fun day out.

You can find out more about “Everesting” here. 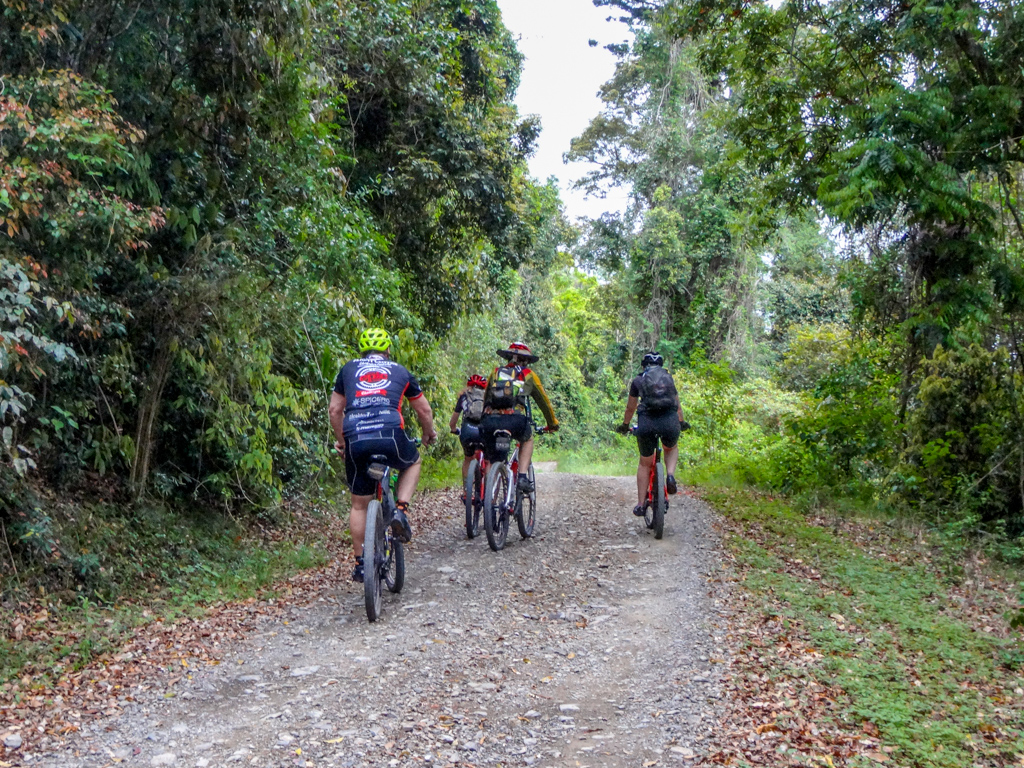