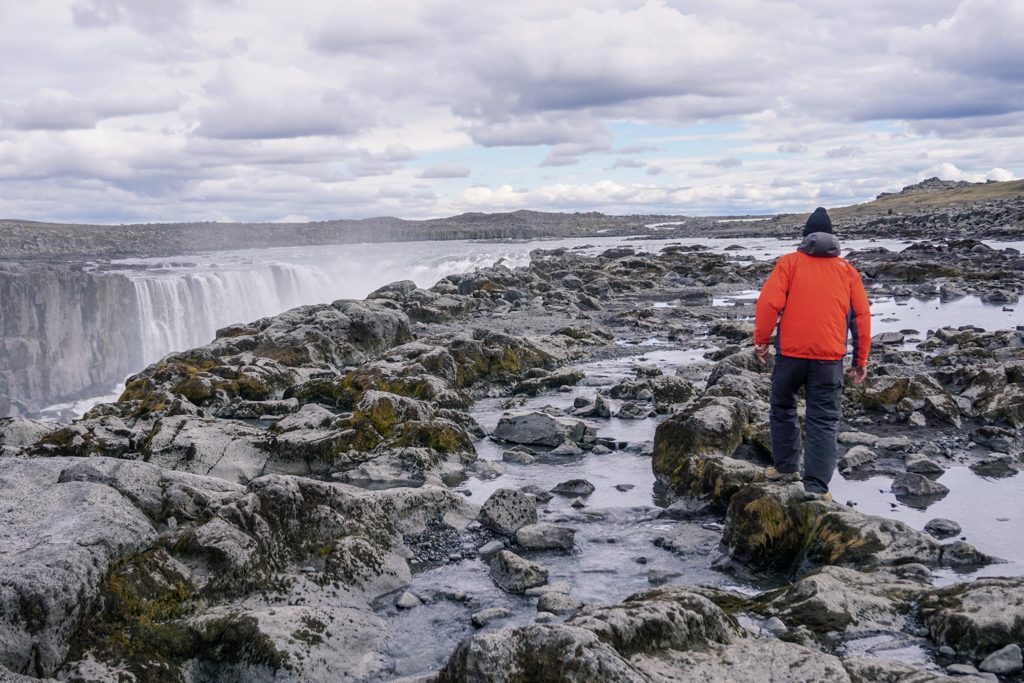 You can find some of the most beautiful waterfalls in the world in the Northeastern Region of Iceland. Liz and I spent a couple of days exploring them. 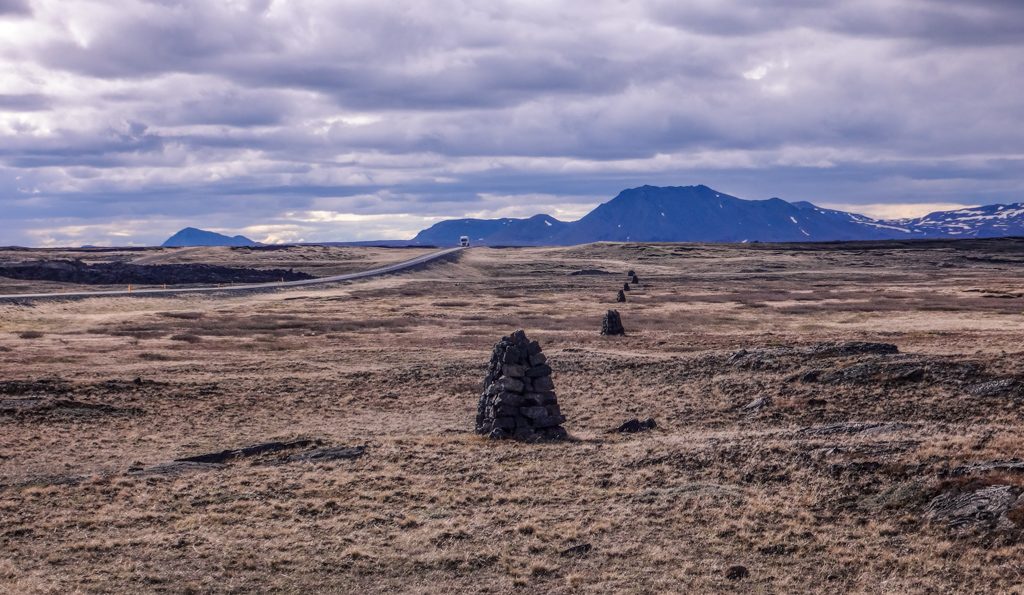 “Norðurland eystra”, as it is called by the locals, is on the opposite side of the country from Iceland’s capital, Reykjavik. It’s remote and rugged.

Before there were highways and paved roads, hardy Icelanders erected lines of rock cairns to mark a path through the snow and rocks.

The cairns remain as a reminder of tougher days. As you drive through this part of the country you can often see them in long lines beside the highway, a testament to gruelling journeys in the harsh conditions of bygone days. 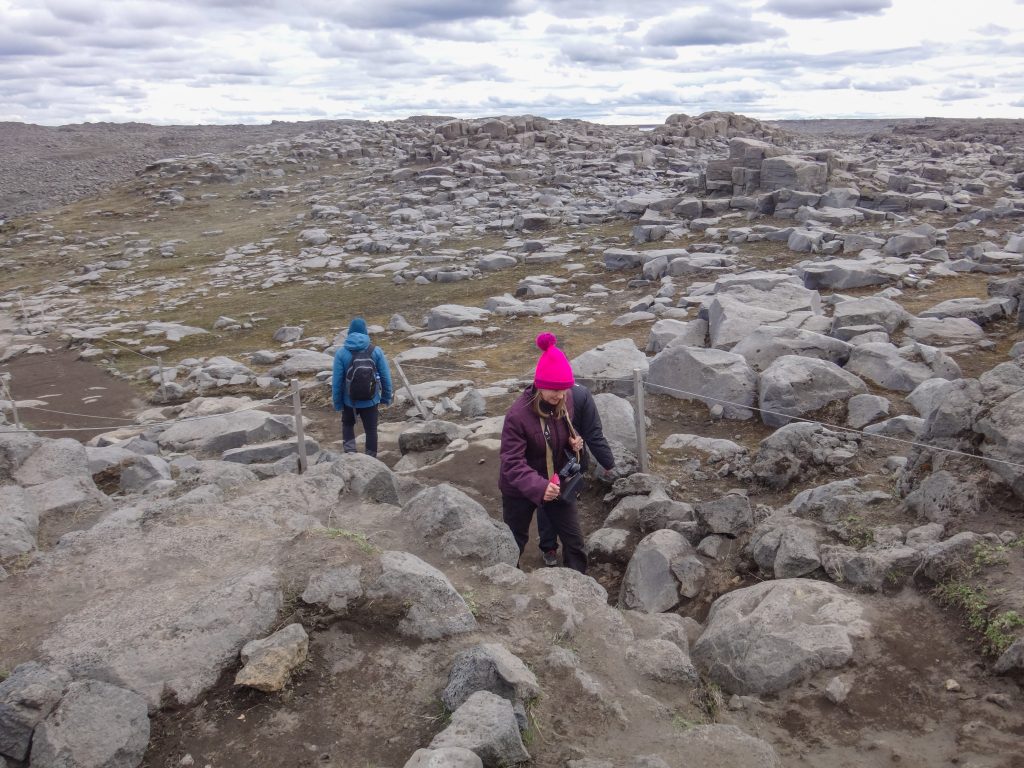 We left the main highway and drove north for about twenty kilometres along a dirt road to a vast field of boulders.

As we tiptoed over the rocks, we could hear a powerful low rumble in the distance.

Mist slowly uncoiled in the air a few hundred metres ahead.

Dettifoss is the most powerful waterfall in Europe.

During peak ice-melt times in spring, over a megalitre of water pours through it every second.

We stood on the edge of a tall cliff, and watched this amazing cataract while icy spray stung our faces.

On the other side of the river Jökulsá (pronounced “YERK ul sow”) I watched a couple of crazy tourists splashing around in the water, barely metres away from the edge.

This area offers a lot of visual reward for little effort. A couple of kilometres upstream another equally impressive waterfall, Selfoss, thundered over basalt columns.

We joined other sightseers and followed the walking track upstream to check it out. 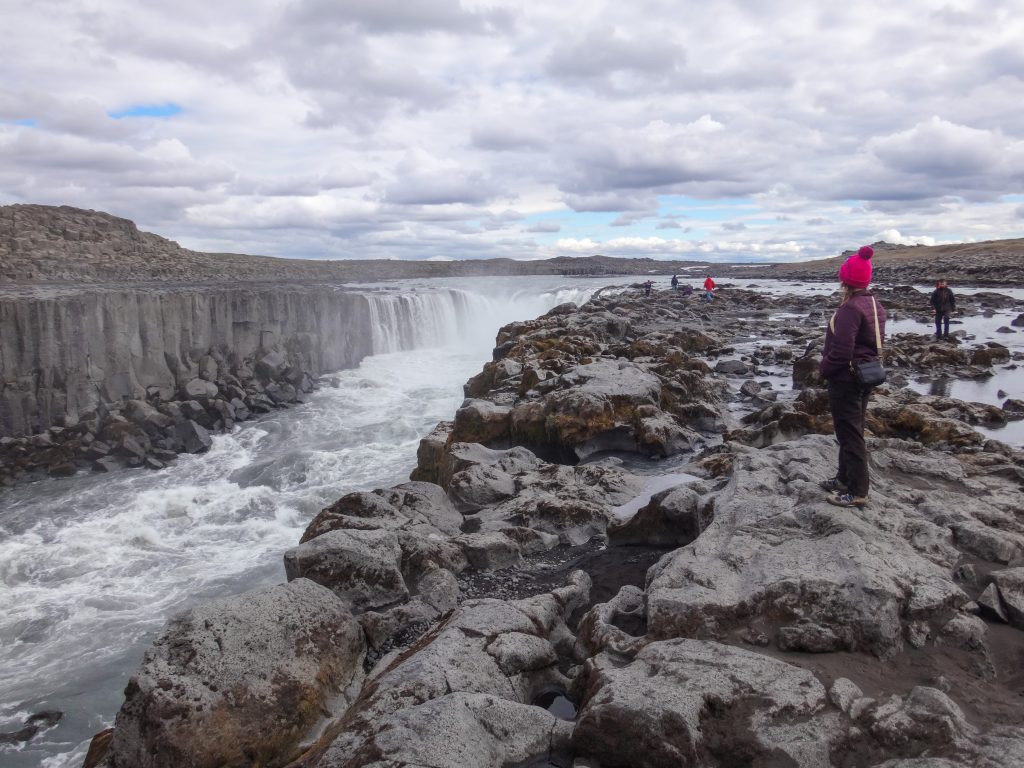 We had to rock-hop over pools of cold water to get close to the falls.

This water flows from the Vatnajökull Glacier – a huge icecap which covers almost ten percent of the landmass of Iceland.

Over time it has carved out magnificent valleys through the volcanic rock. 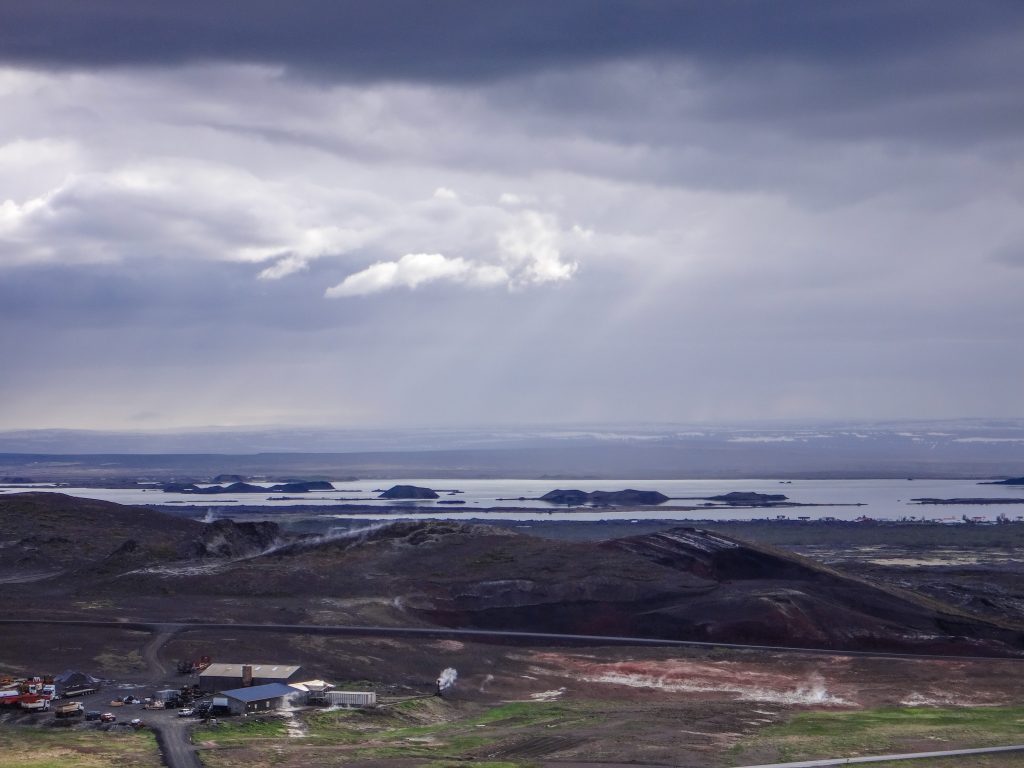 We left the Jökulsá river and headed inland towards a large lake.

Lake Mývatn is on the edge of a volcano. Steam rose from the ground near the shoreline.

“Mývatn” literally means “Lake of midges”. In a few weeks the air in this place would be thick with biting insects. They weren’t here yet. We’d timed our visit perfectly.

We followed the southern shoreline of the lake, away from busy roads.

Every few kilometres we needed to stop to take in the views. This was a stunning place and neither of us wanted to rush it. 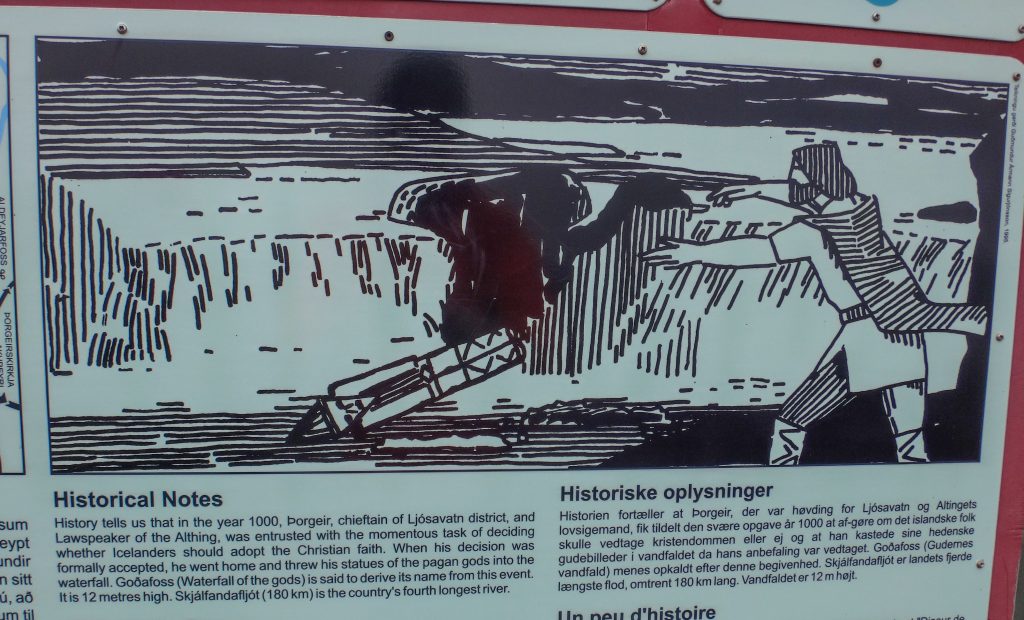 There are many waterfalls here, and Goðafoss is probably one of the most historically significant of those waterfalls.

Over a thousand years ago, Iceland was a country divided by religion. Some people honored the Norse gods, others were Christian. The leader of Iceland’s parliament (yes – they had a parliament over a thousand years ago) was a chieftain named Þorgeir (Pronounced “THOR gayr”). It was his responsibility to come up with a solution. The legend says he meditated for a day and a night under a fur blanket, while he decided what to do. Although he believed in the Norse gods, he decided that his country should adopt Christianity – a choice which probably averted a civil war. Þorgeir was a rare leader who didn’t let his personal beliefs obstruct sound political decisions.

The final part of the legend of Þorgeir describes how he threw his Norse statues into the waters of Goðafoss as a physical demonstration of his decision.

I thought of Þorgeir as we gazed into this stunning waterfall. What a powerful place.

Liz and I scrambled down to the water below the falls to have a look. 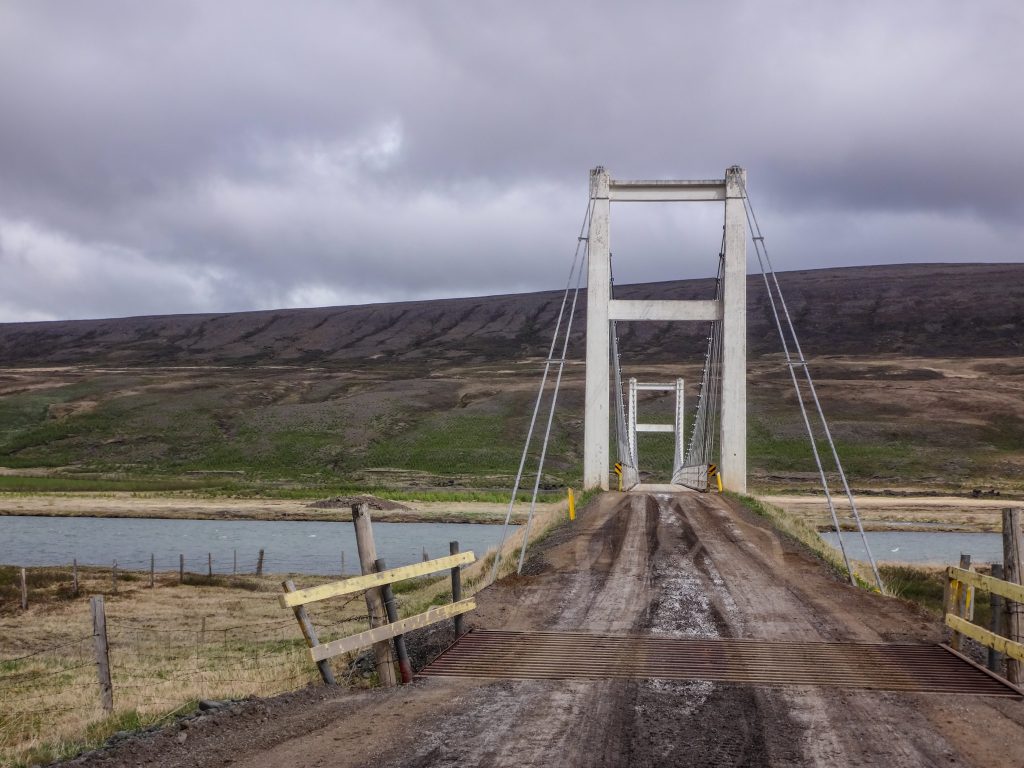 Goðafoss is on the Skjálfandafljót river – another outflow of the mighty Vatnajökull glacier.

We decided to follow the river upstream for a an hour or so to see where we ended up. 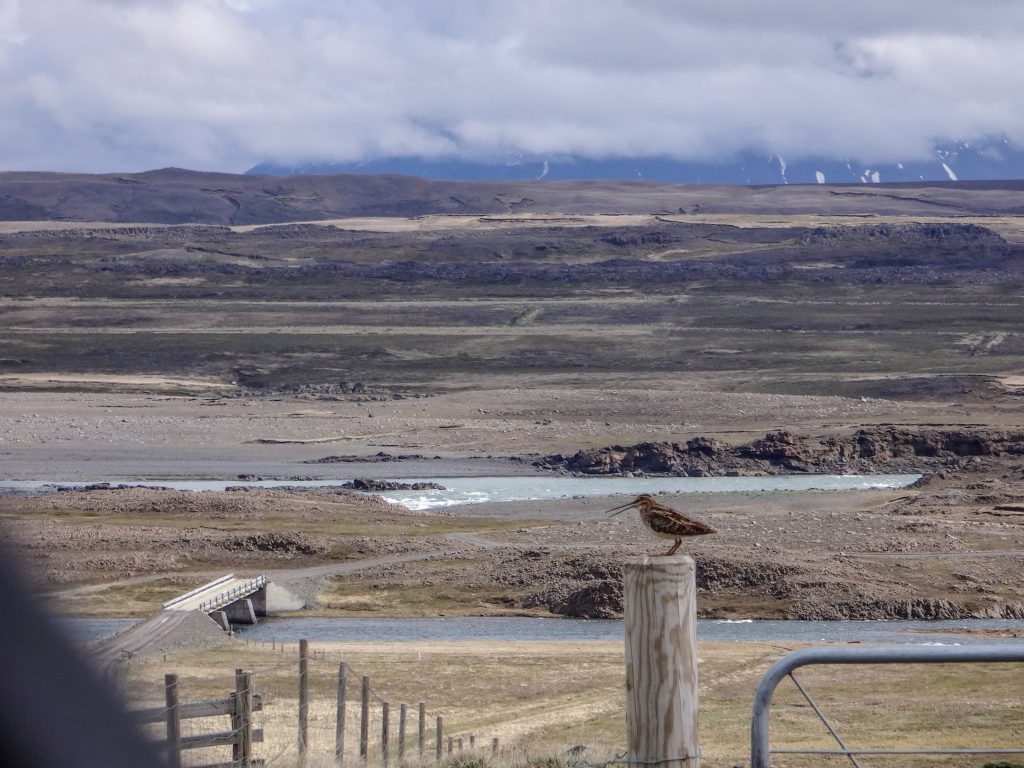 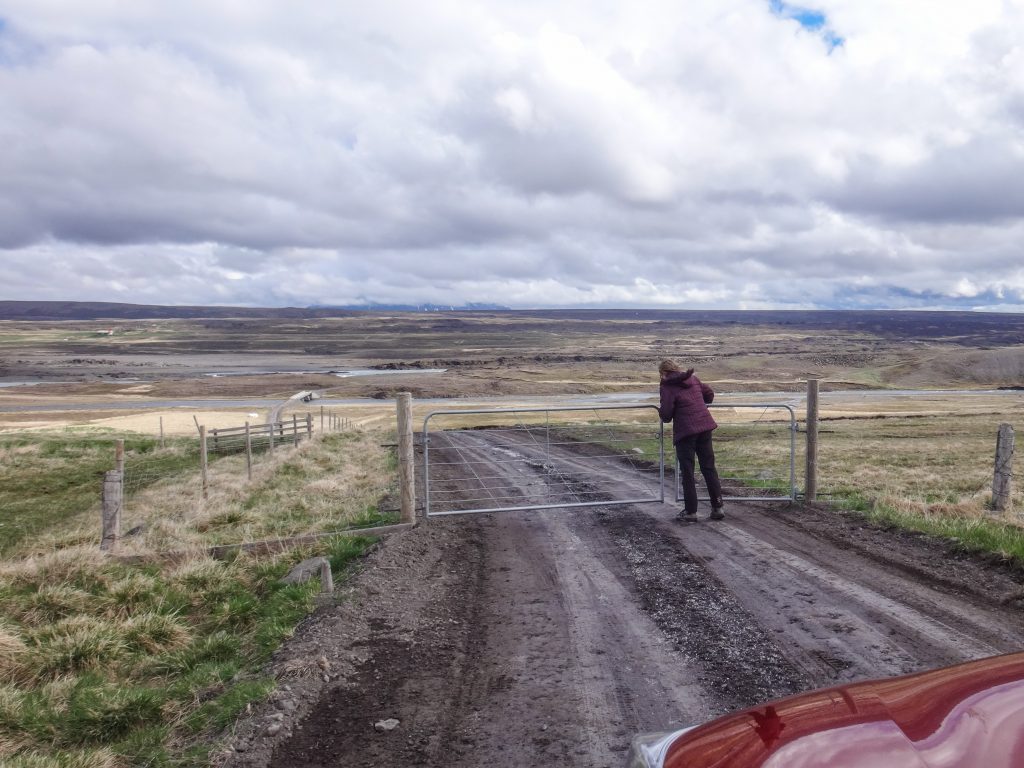 Eventually we came to a gate which we opened and drove through. 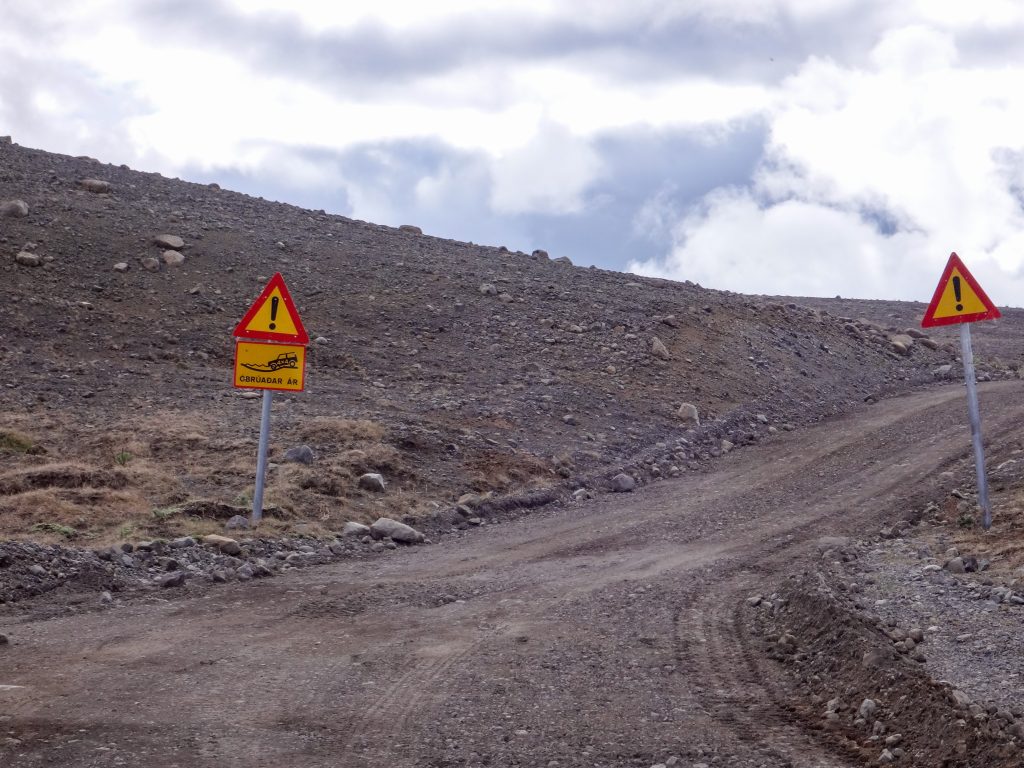 And then the road became really rough.

A sign warned us that rental cars, even 4WD’s, were not permitted to drive any further… 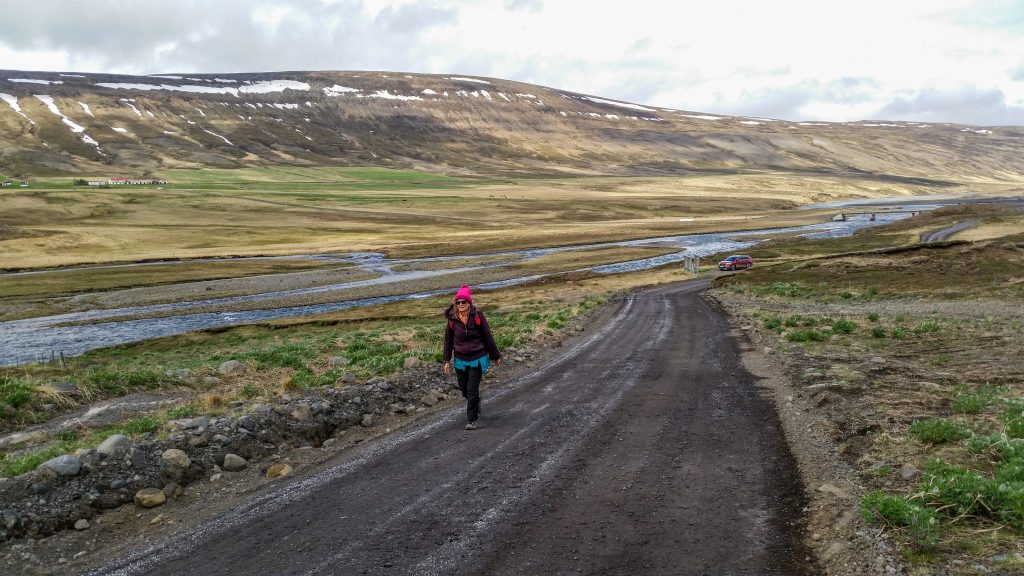 …so we parked the car and started walking. 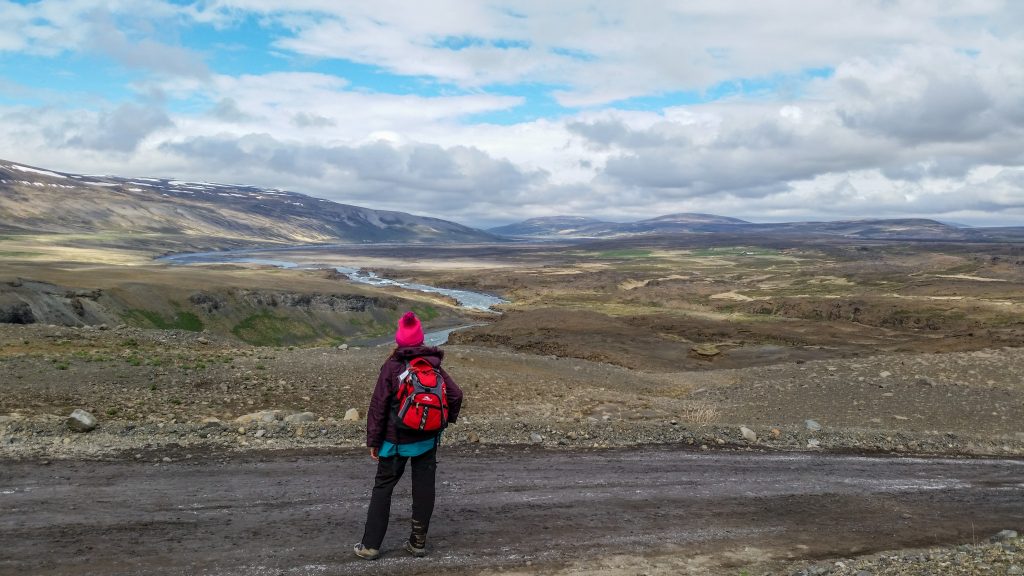 As we walked uphill, the Bárðardalur valley opened up below us. 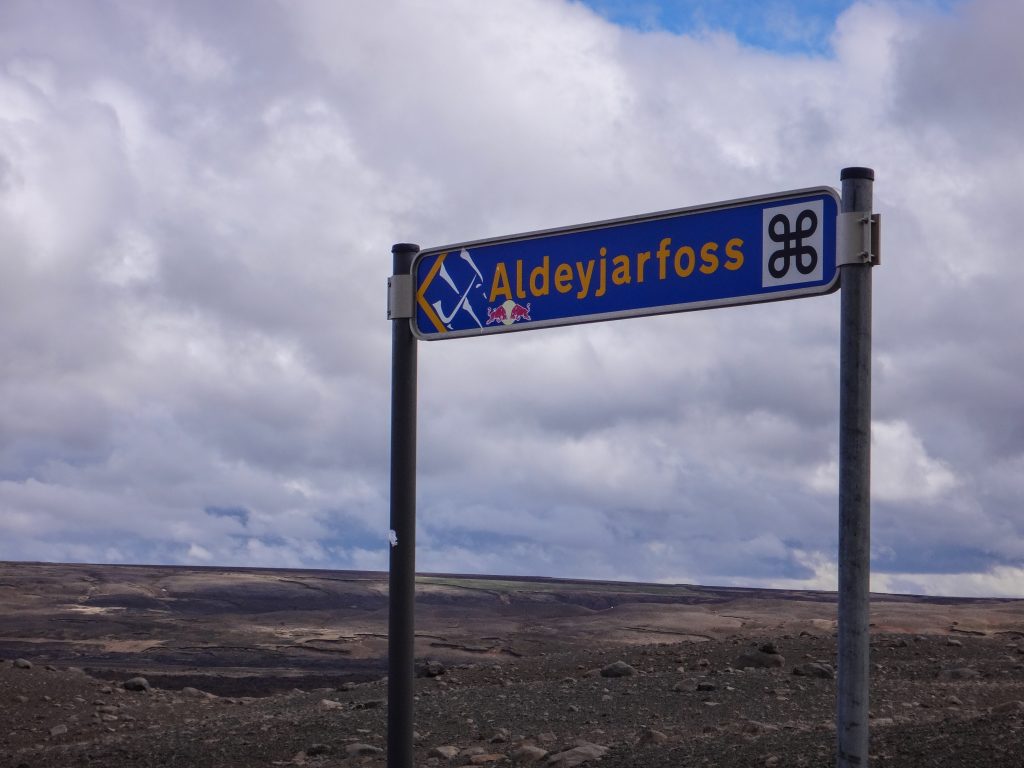 One of the first Icelandic words I learned was “Foss” – meaning waterfall.

A sign pointed away from the gravel road towards some cliffs. 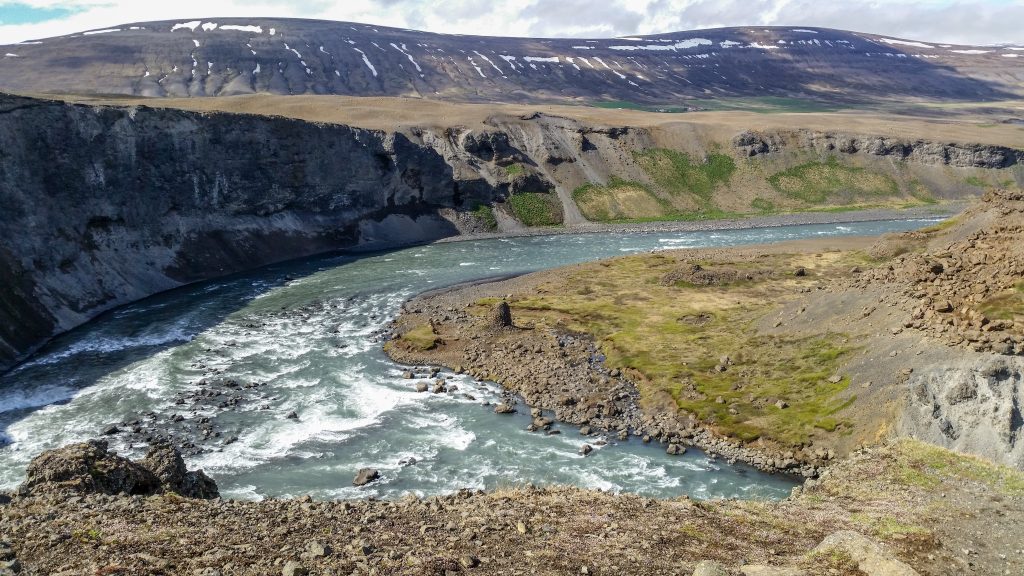 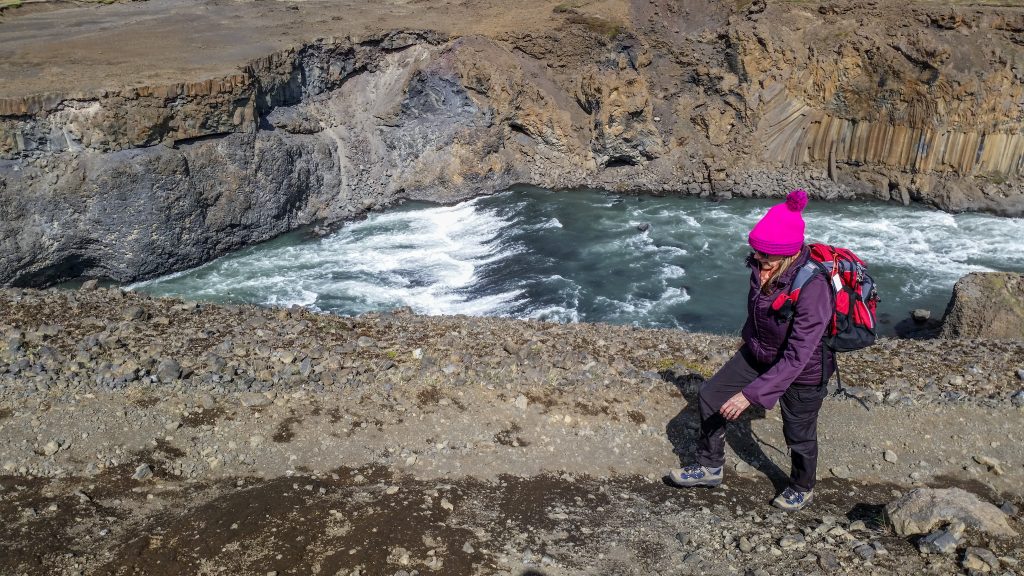 The river grew angry and white…

And then we saw it…

And best of all, we had the entire place to ourselves. 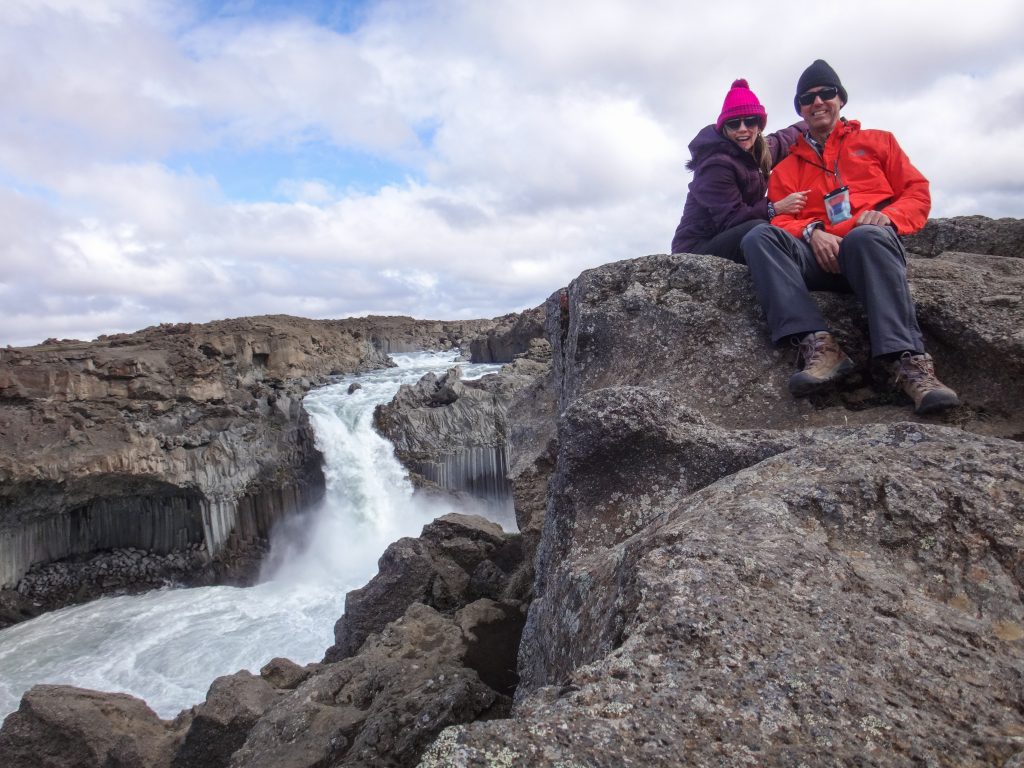 We planted ourselves by the rock edge and enjoyed the panorama.

Iceland is a small country, and doesn’t suffer from the hordes of tourists that you see in some other countries, but some of its more popular land marks are crowded at times.

But this wonderful place was deserted, except for us.

We delighted in our good fortune. It was worth the time to follow a dirt road up into the highlands.

Like Robert Frost, we had taken the “road less traveled by”, and that made all the difference.

Both of these hikes were easy, requiring short walks from where we parked our car.

At Dettifoss and Selfoss we walked just over four kilometres in an hour and a half.

At Aldeyjarfoss we walked almost six kilometres in an hour and a half.

If you have your own vehicle, and are near Goðafoss, it’s well worth taking the hour-long drive up the F26 to view this spectacular but remote waterfall.

Thanks Lizzie for coming on this great adventure with me. 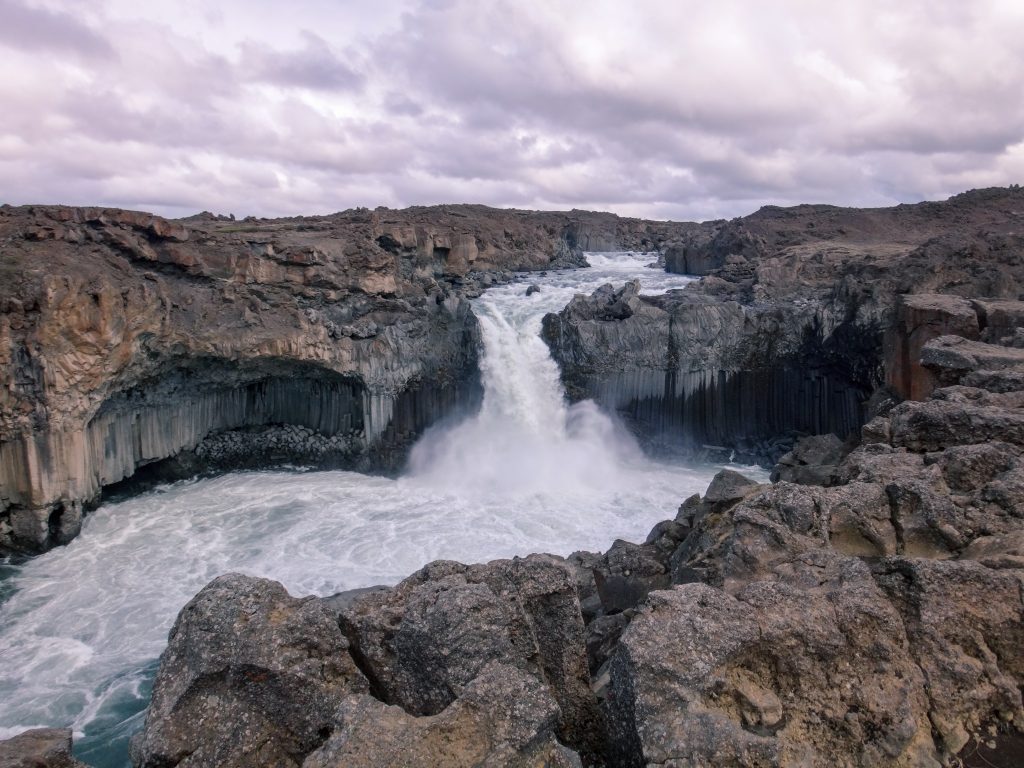 2 Replies to “Land of Waterfalls”