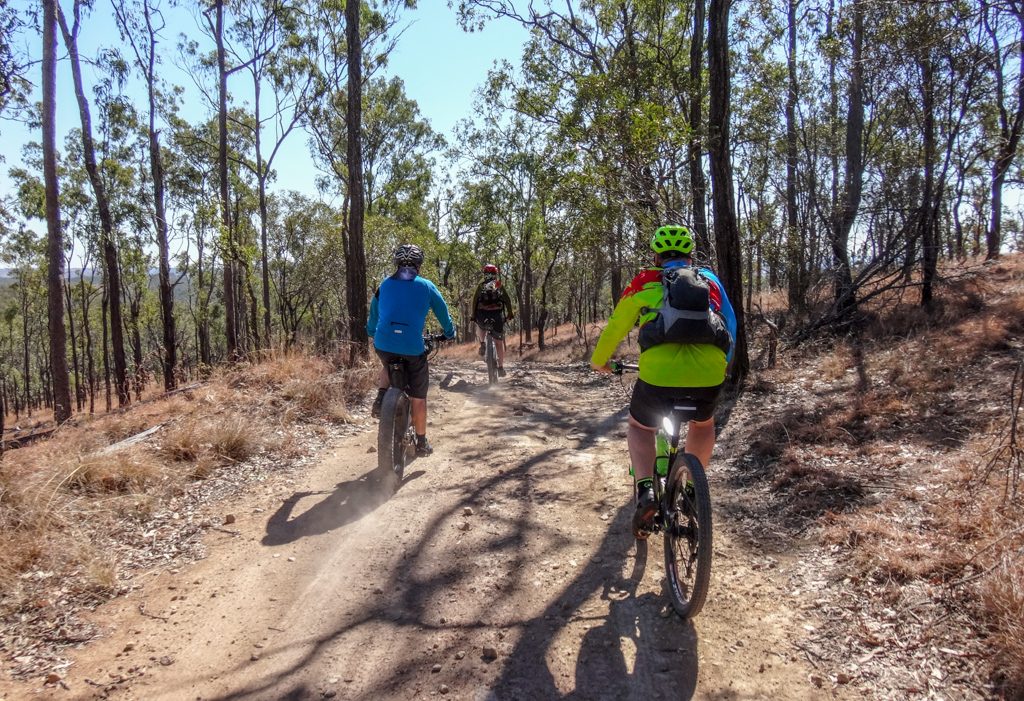 How do you ride from Yarraman to Nanango via dirt roads?

Today we answered that question. 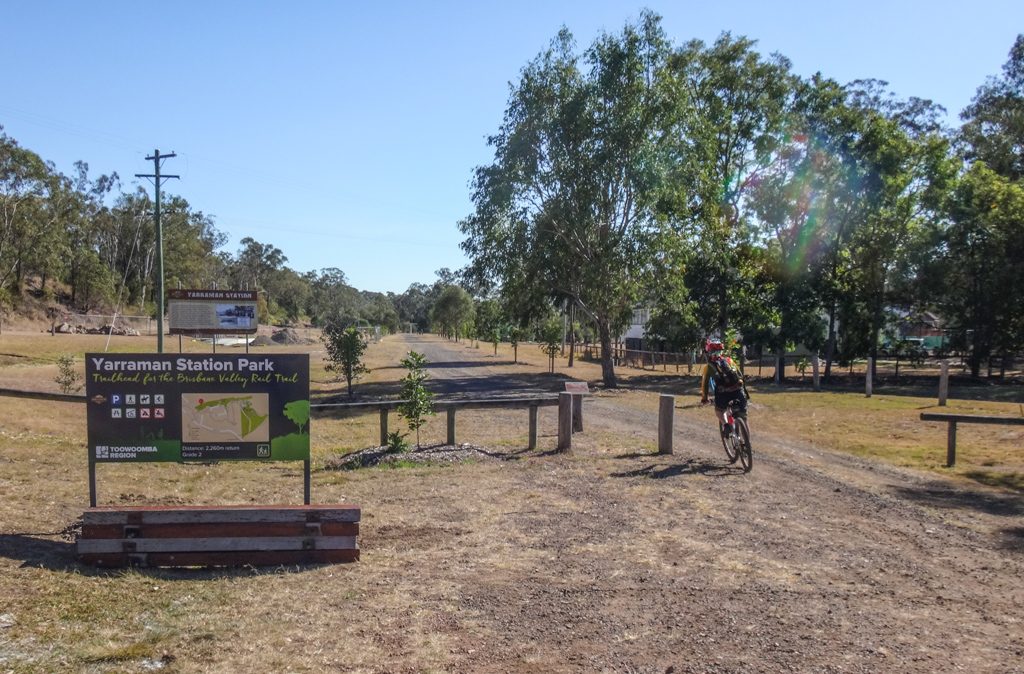 For the last couple of months we’ve been completing a huge jigsaw puzzle of dirt tracks and gravel roads, as we plan an off-road route between Ipswich and Gympie.

We want to complete this 360km ride in under four days, and plan to follow the Brisbane Valley Rail Trail (BVRT) from Ipswich to Yarraman.

We’ll also follow part of the South Burnett Rail Trail (SBRT) to Kilkivan, and then some quiet back roads to Gympie.

Today we explored some old stock routes between Yarraman and Nanango.  If we could sort this out we’d then have a good mountain bike route connecting the Yarraman terminus of the BVRT with Wondai on the SBRT. 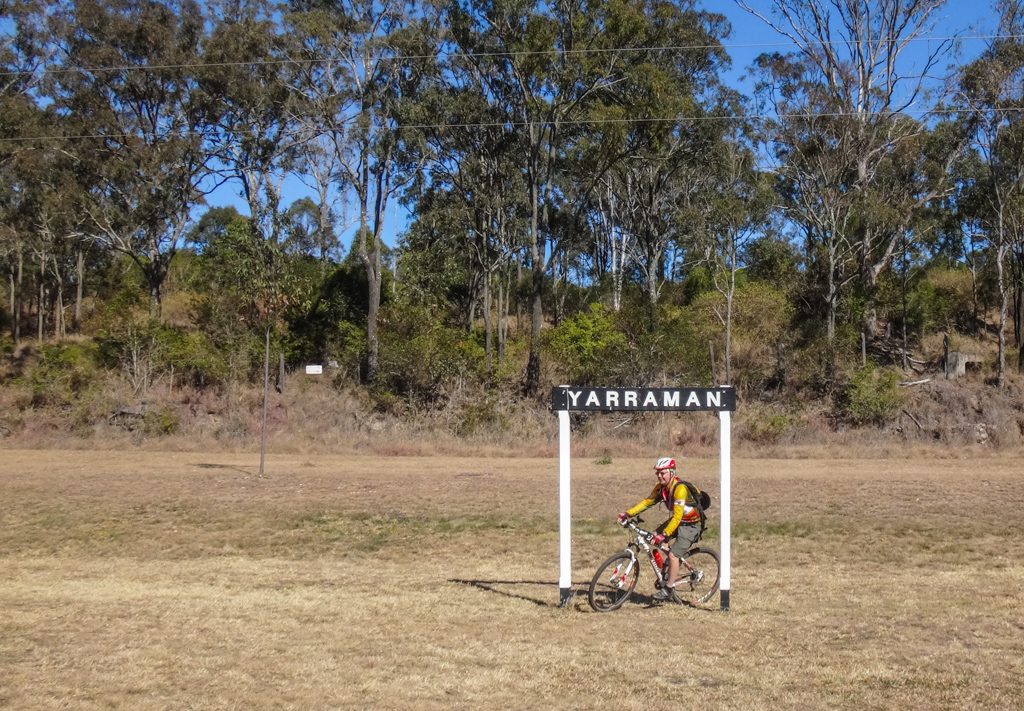 The railway line from Ipswich ends here.  The buildings have moved closer to town, but the old sign still stands.

The only “trains” that pull into this station these days are either the two-wheeled or four-legged variety. 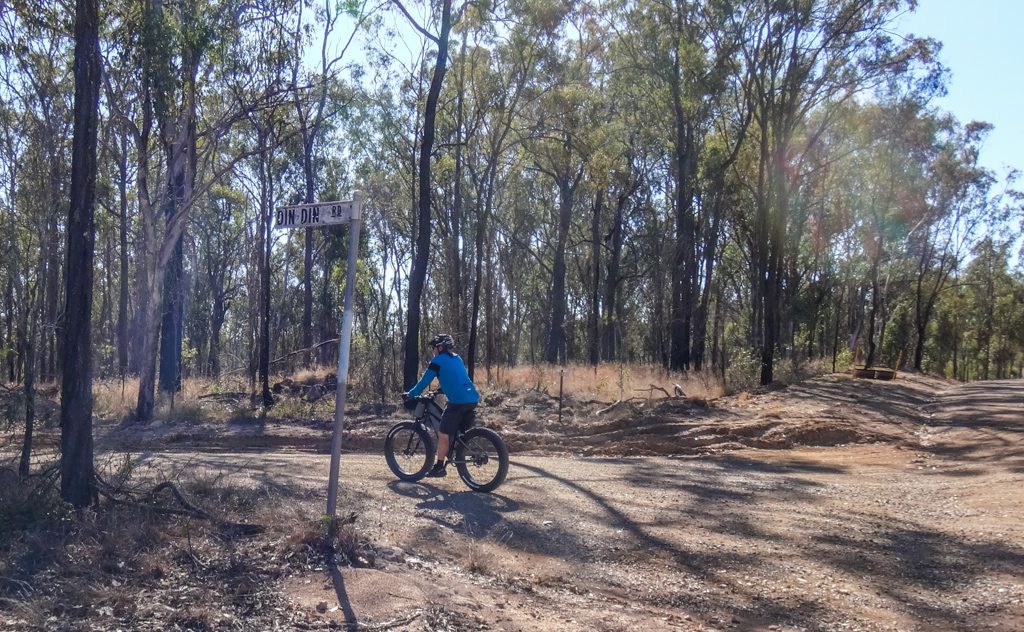 After a short roll, we turned into Din Din Road – an old stock route which headed north towards Nanango. 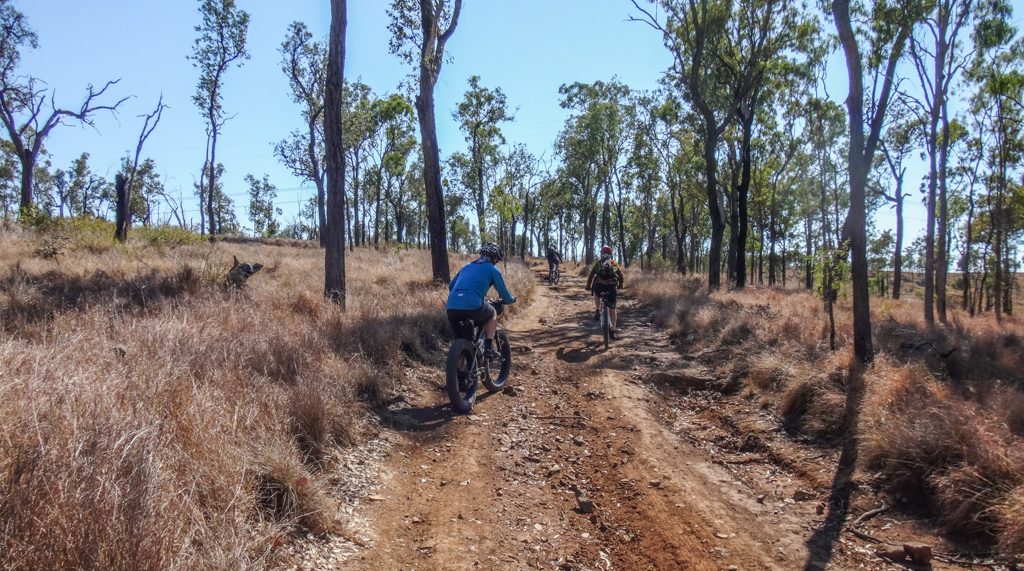 Not too smooth, not too bumpy, and not too steep – this beautiful trail was perfect for the bikes. 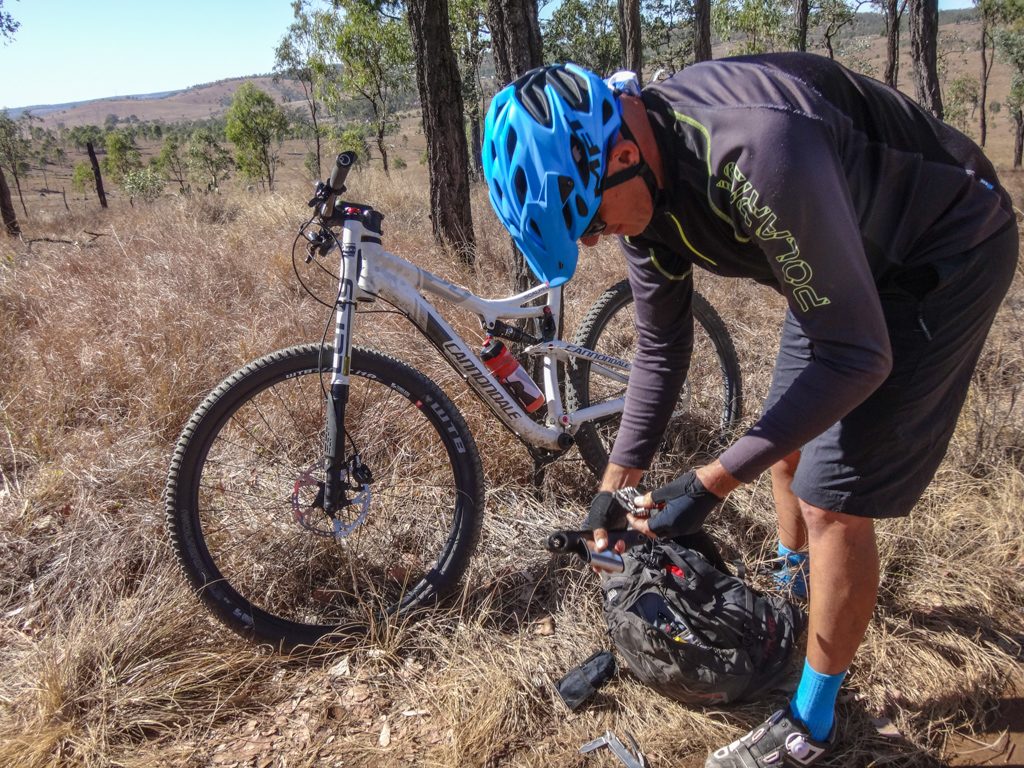 This is the bit that joins the pedal to the bike.

Paul ignored the jokes and fixed the bike. 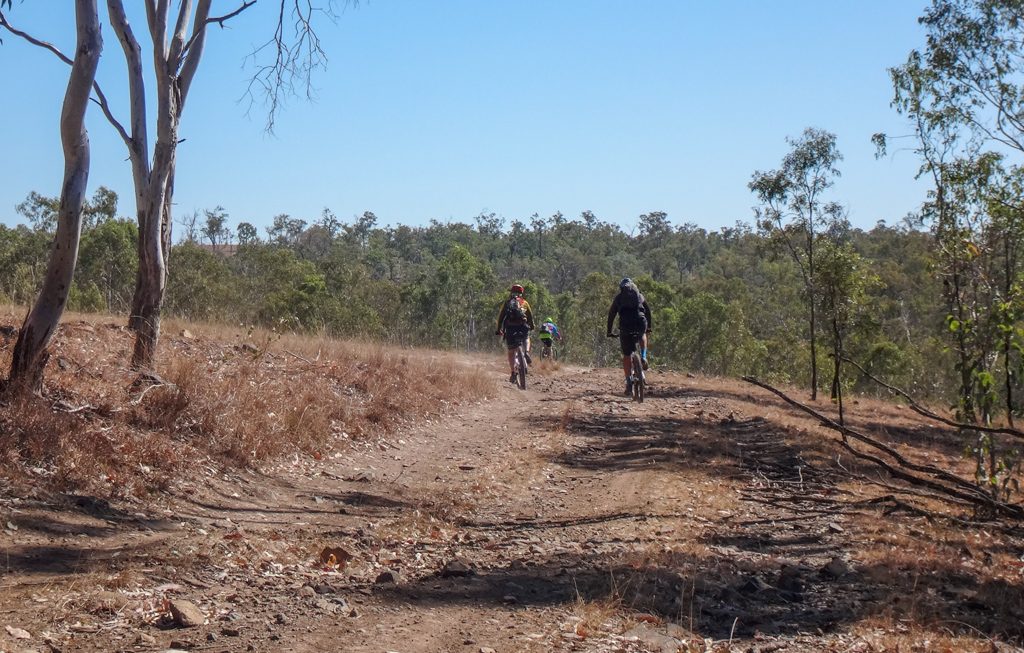 Despite the lack of rain, this was beautiful Aussie country.

We bounced over the rocks towards Yarraman Creek.

“Ah this is gorgeous” I muttered as we rolled through a dry creek bed. 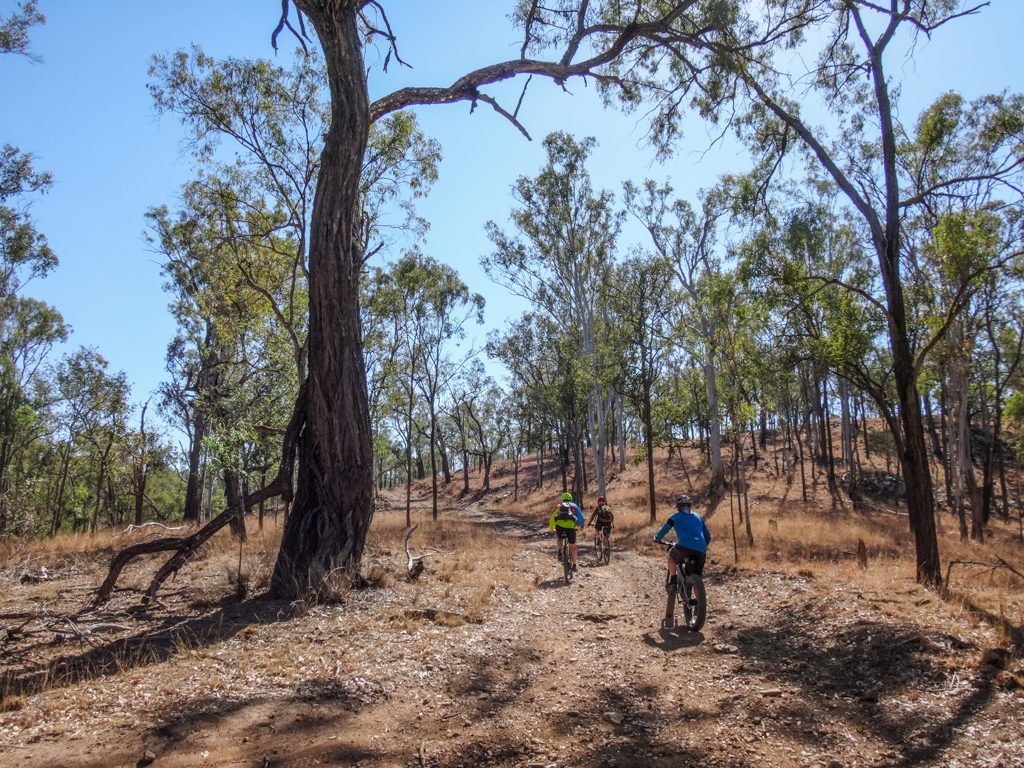 Up another hill, past an aged Ironbark.  With tracks like this, why would anyone want to ride on the road? 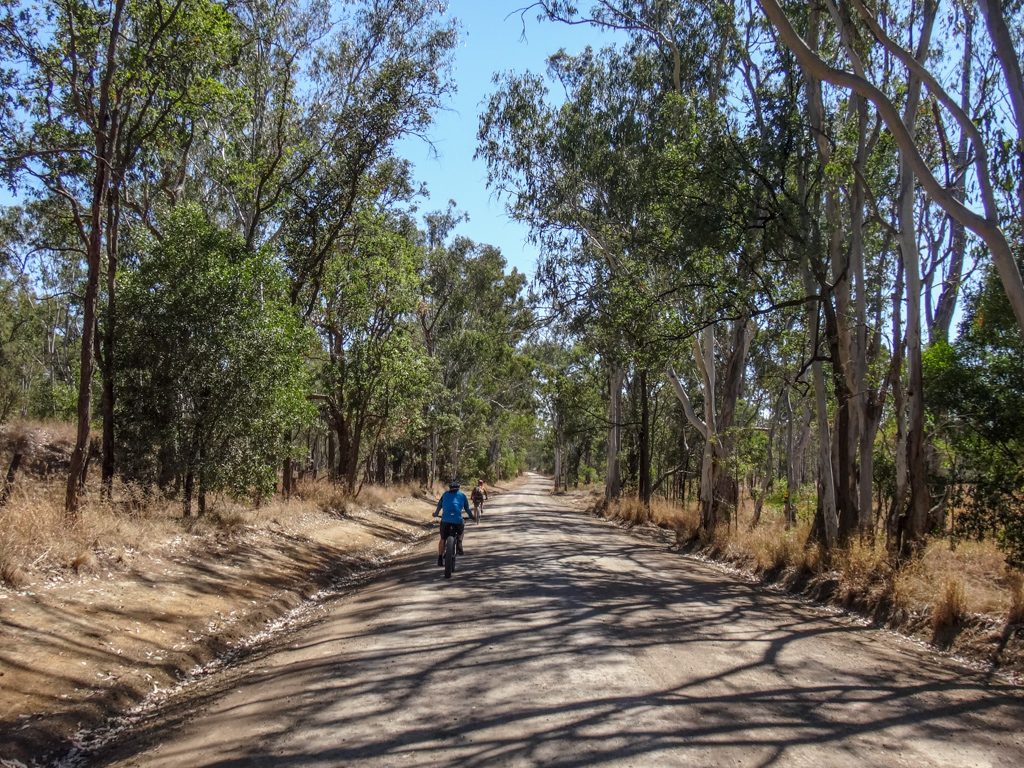 As we neared Nanango, the road widened and became more “civilized”. 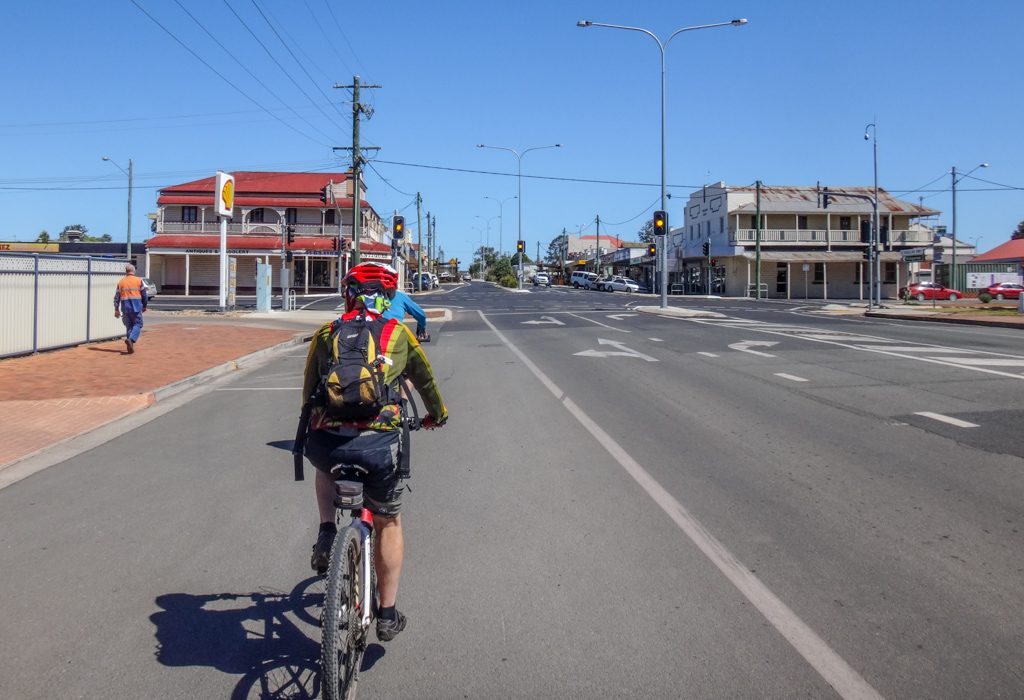 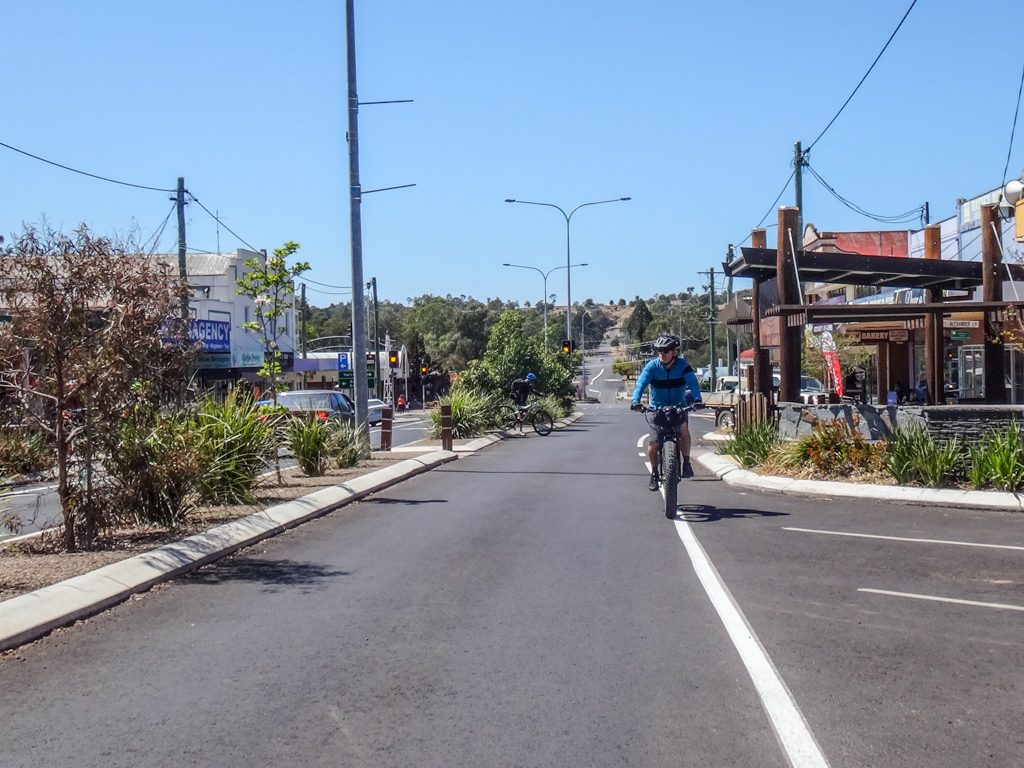 Nanango was the perfect spot for some morning tea.

We stopped at a local bakery and refueled with a delicious pastry and some world-class coffee. 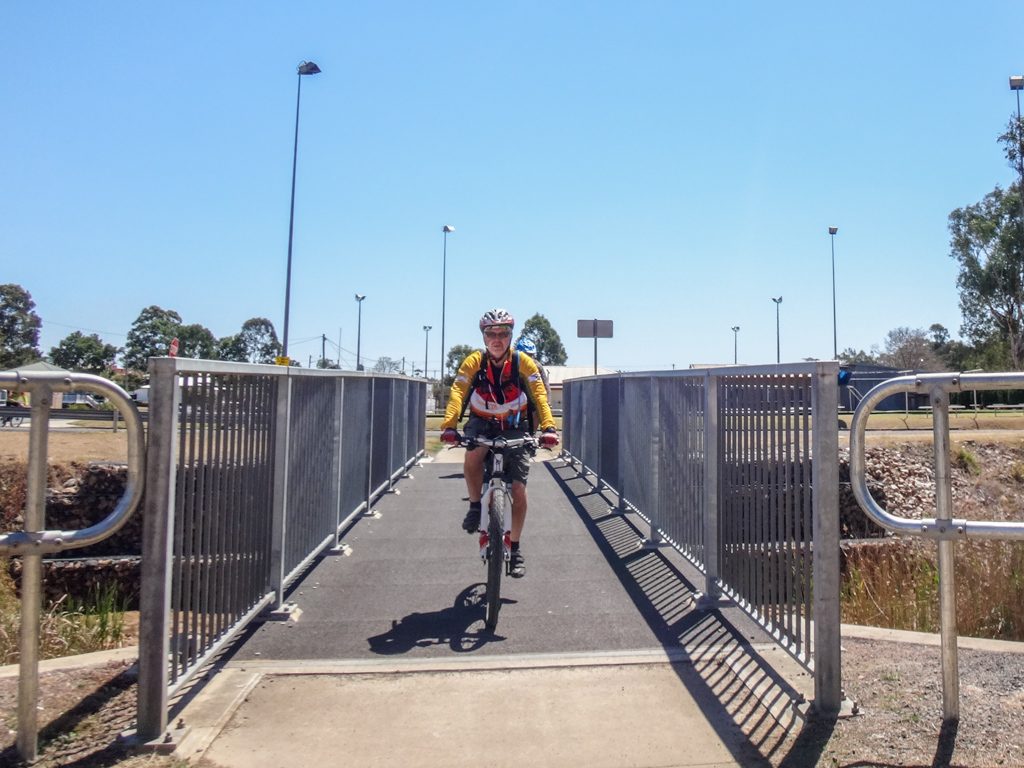 After a leisurely break, we rolled away from town and back towards the bush. 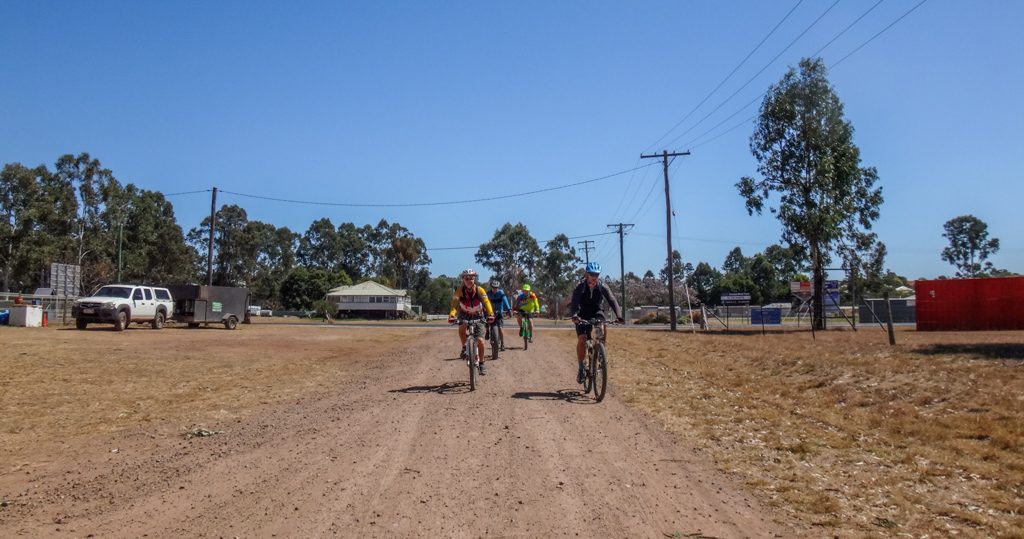 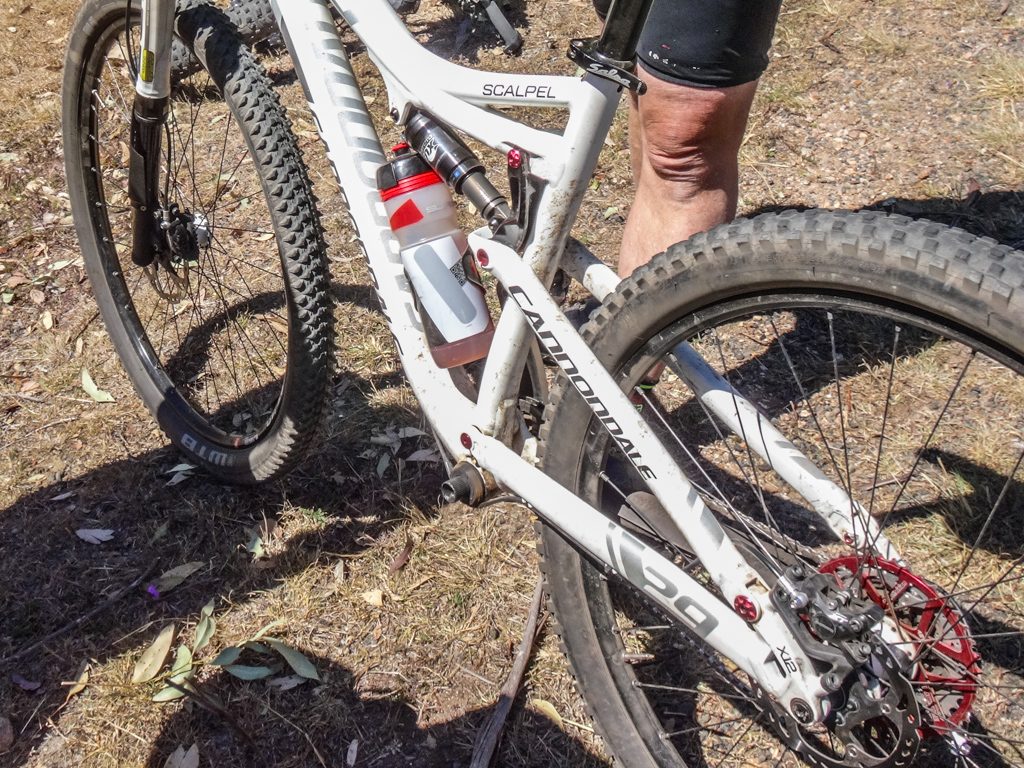 We all stood round and offered unsolicited advice while he patiently fixed the crank arm. 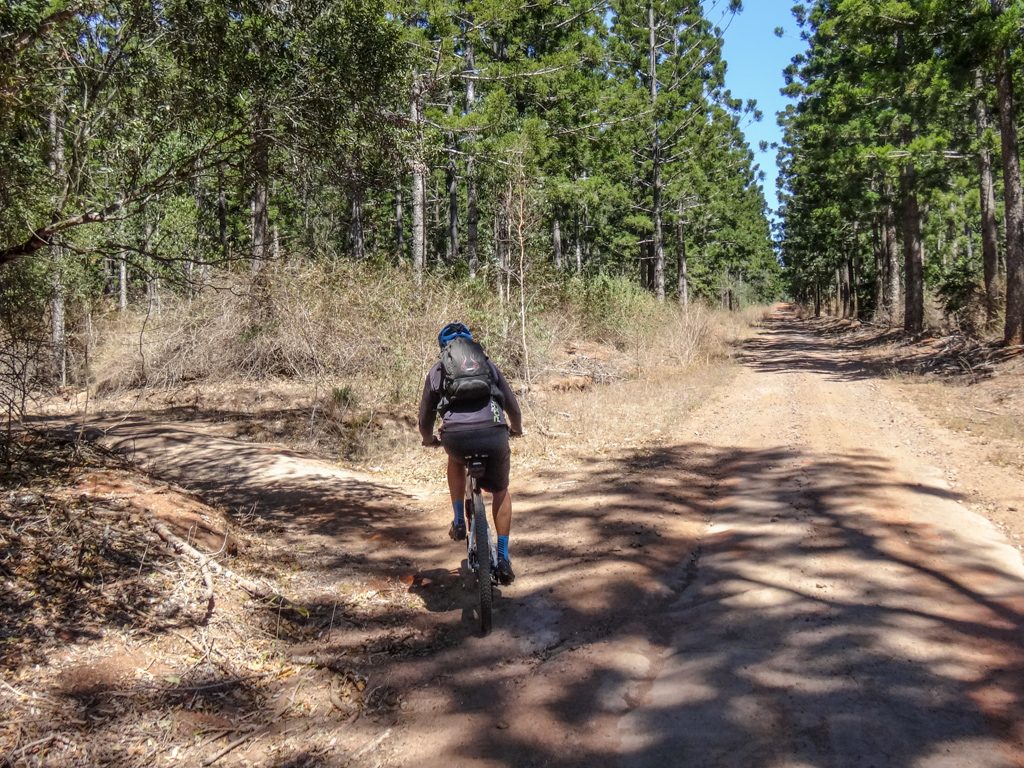 Rather than retrace our route, we added some variety to the course by returning through the South Nanango State Forest. 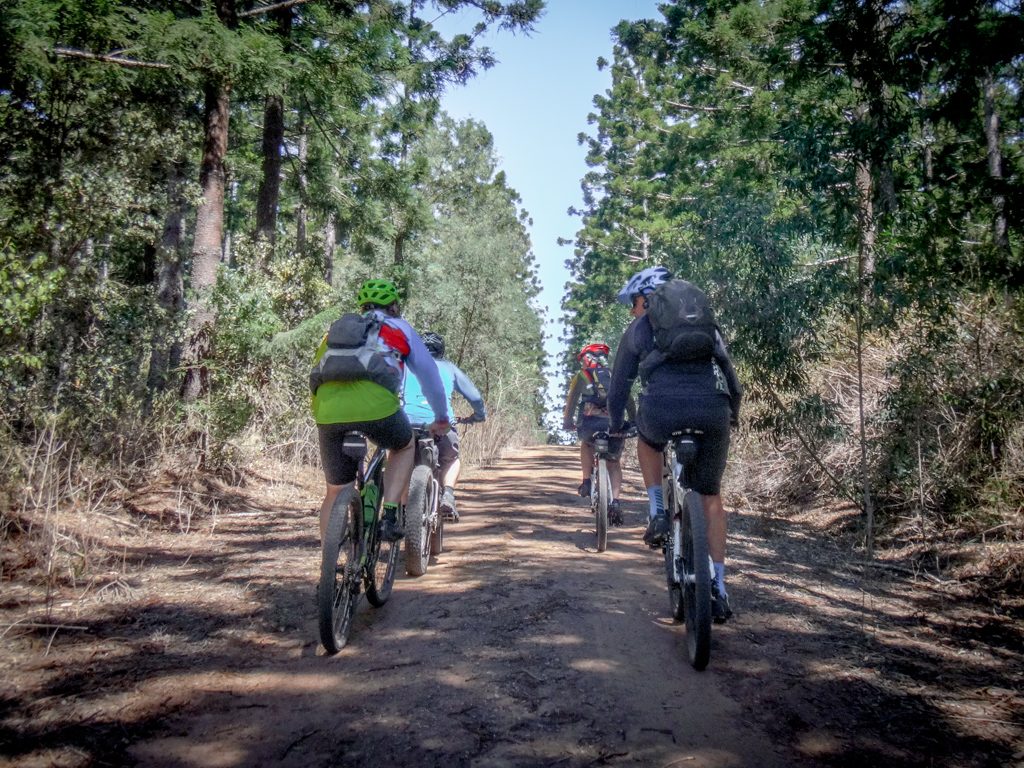 Rows of mature Hoop Pines sheltered us from the warm spring sun.  We enjoyed the cool shade. 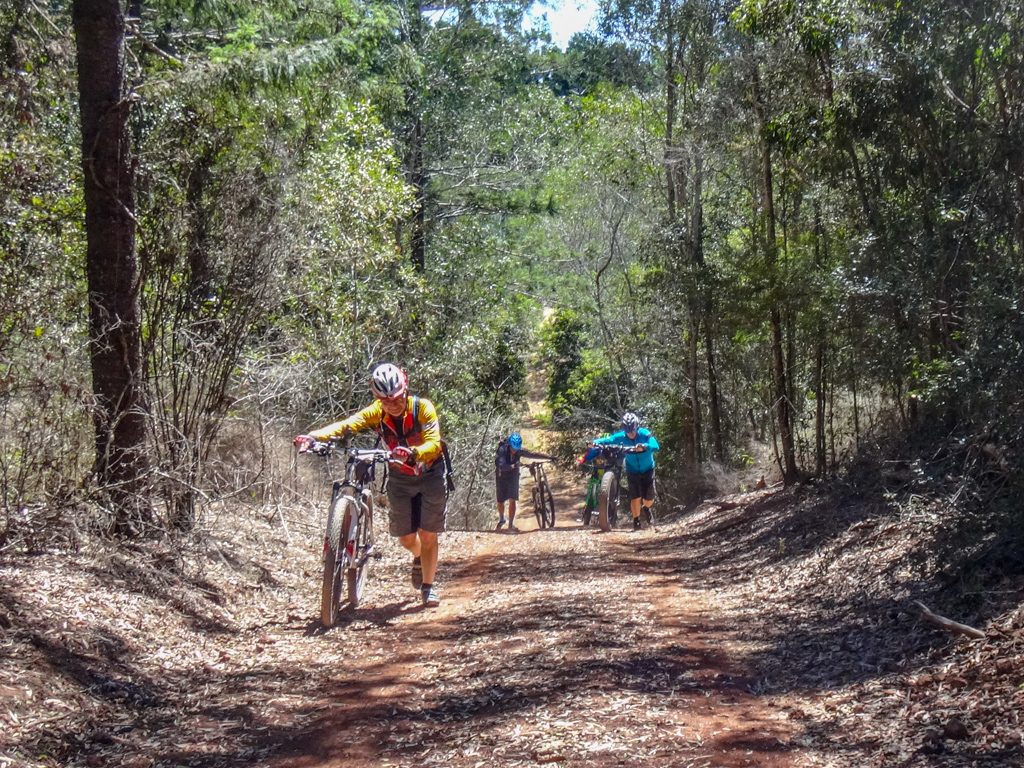 The state forest has more challenging hills than the stock route we had ridden earlier in the day.  We had to work hard in a couple of places. 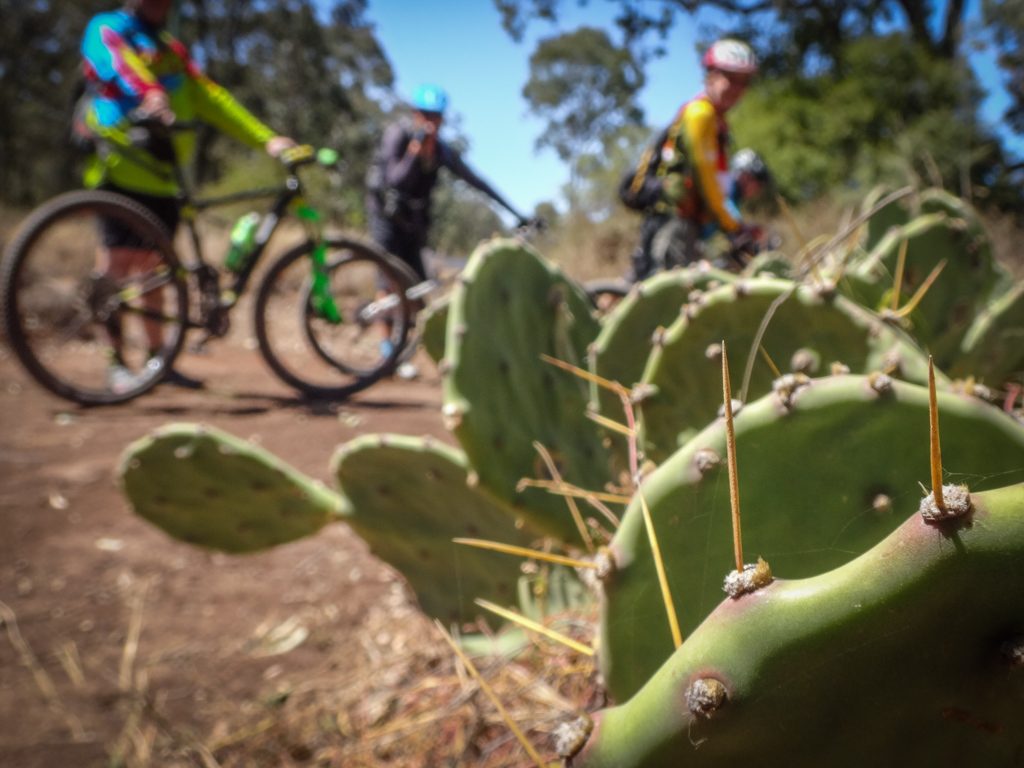 There are a patchwork of state forests around here, connected by quiet gravel roads.

I wouldn’t want those spikes to get stuck in my tyres! 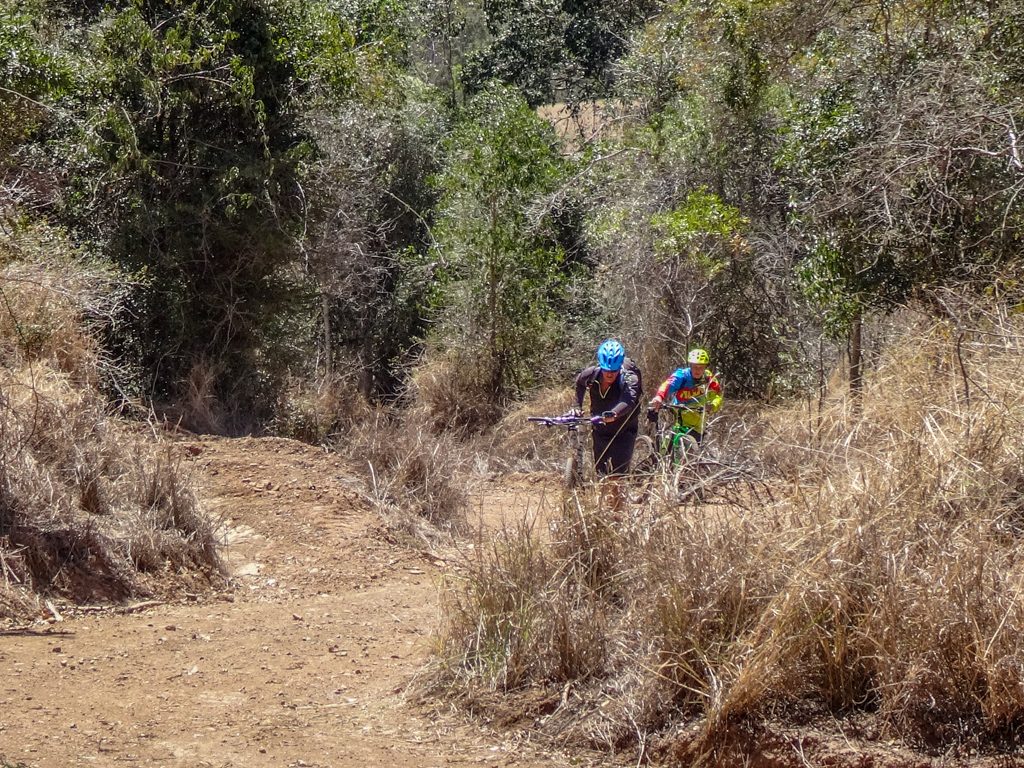 The afternoon grew hot.  Some of these hills wore us out.

Paul had a suggestion… 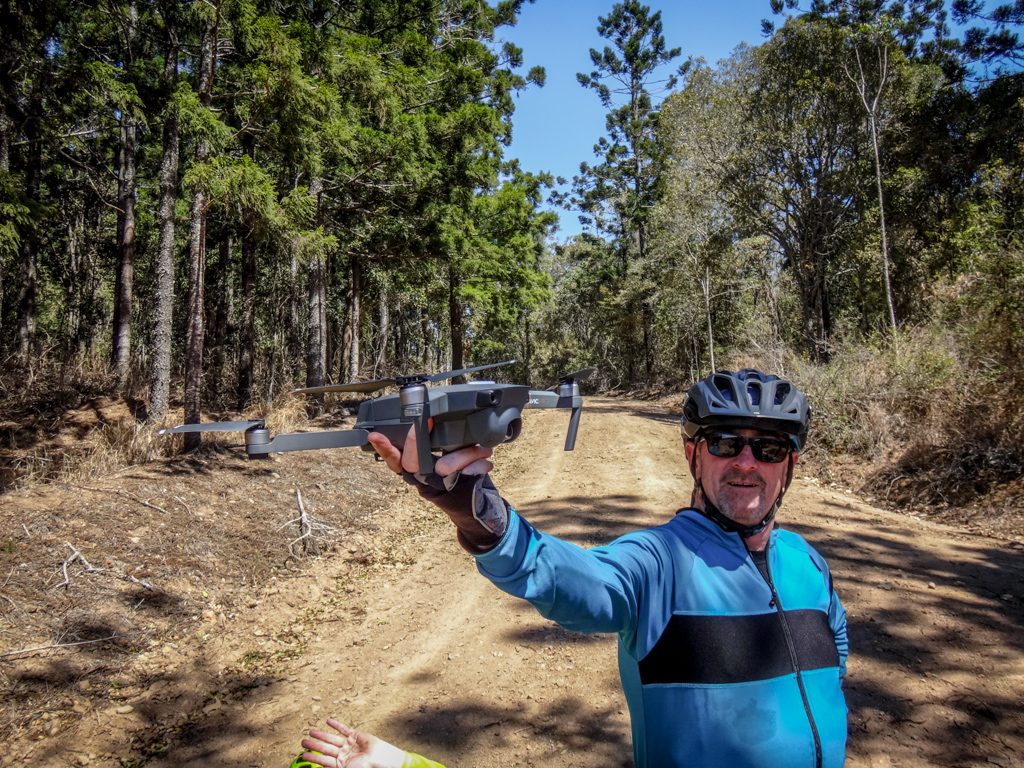 He opened his back pack and pulled out a drone.

Darb offered his hand as the launch pad, but Paul explained that it’s safer when they launch from the ground.

Darb put it down, Paul flicked a switch, and the drone leapt into the air amid a cloud of dust.

We rode away, looking over our shoulders expecting a the curious quad-copter to follow us, but Paul stuck to a simple flight path – the last thing he wanted was to lose a drone in a Hoop Pine Plantation.

We waited on the next hill while the drone buzzed around above us. 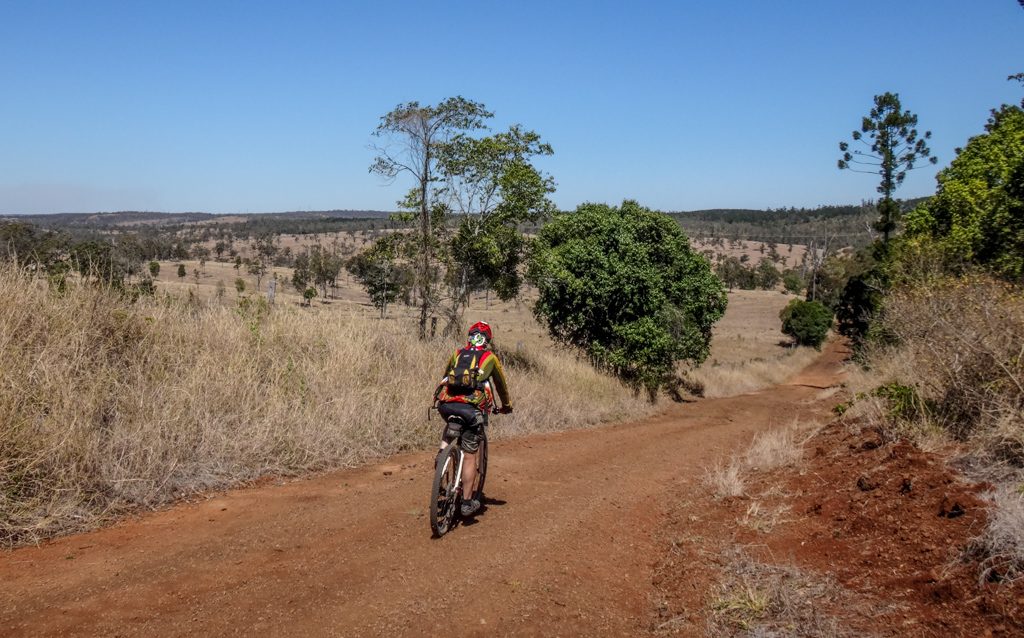 Paul squeezed his drone back into the backpack, and we set off towards Yarraman in hope of a late lunch.

If we hurried, the kitchen would be open at the local pub. 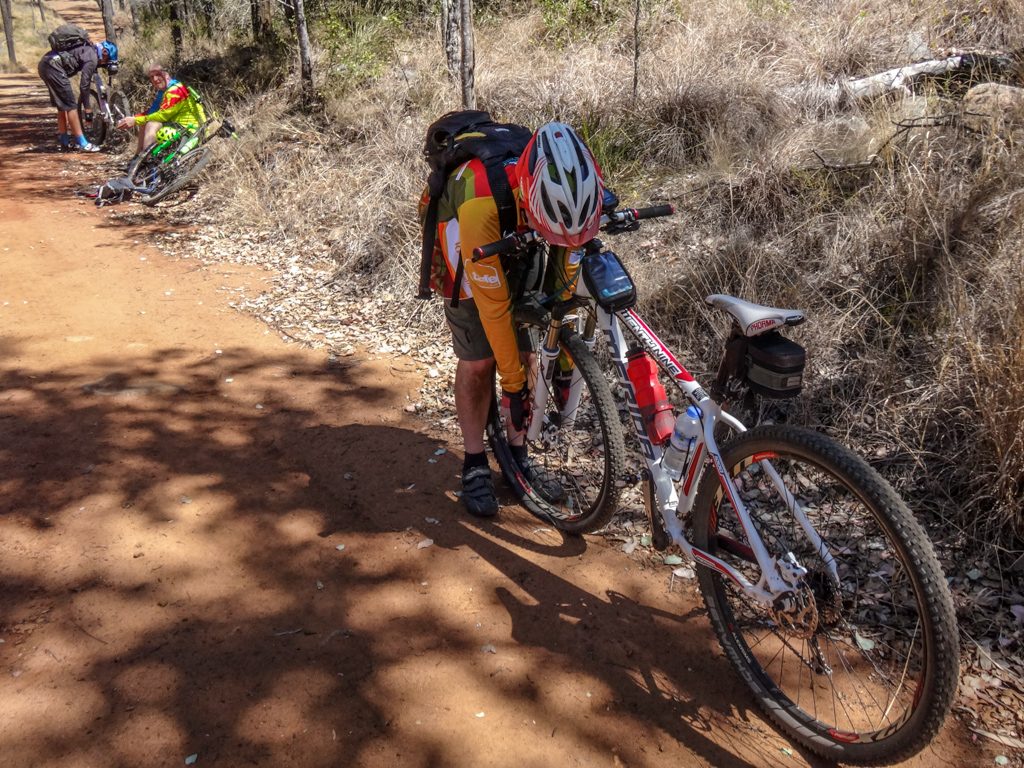 Russel ran over some large thorns and ended up with half a dozen in his front tyre. 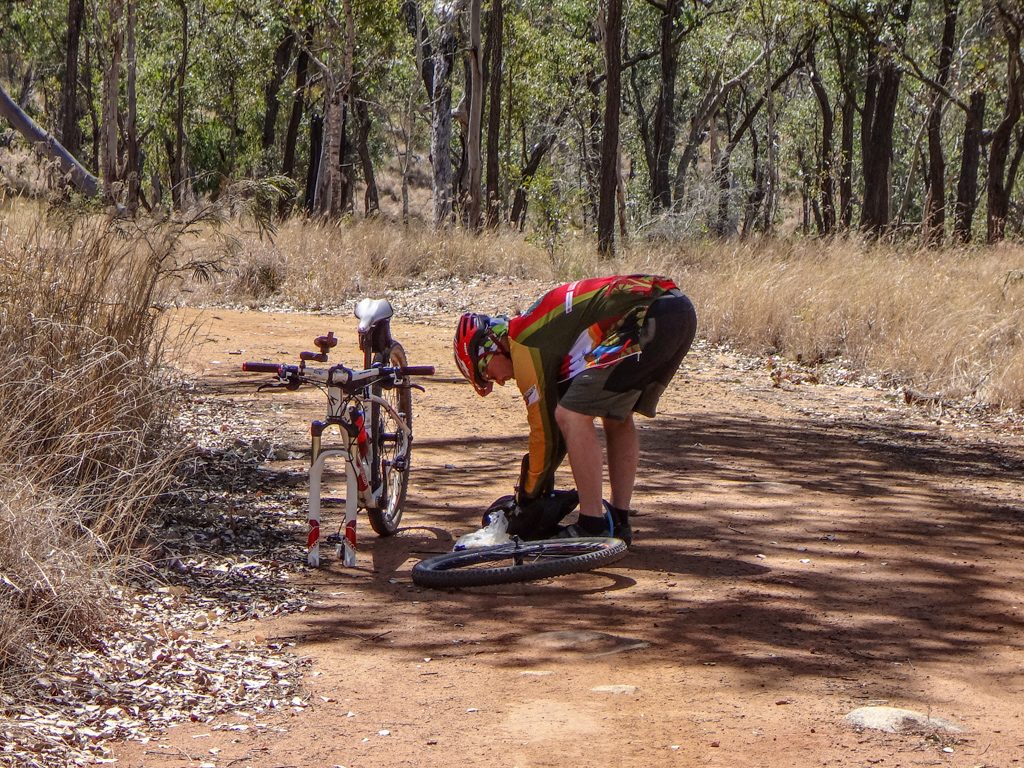 He set to work fixing them…

…while we enjoyed a short break. 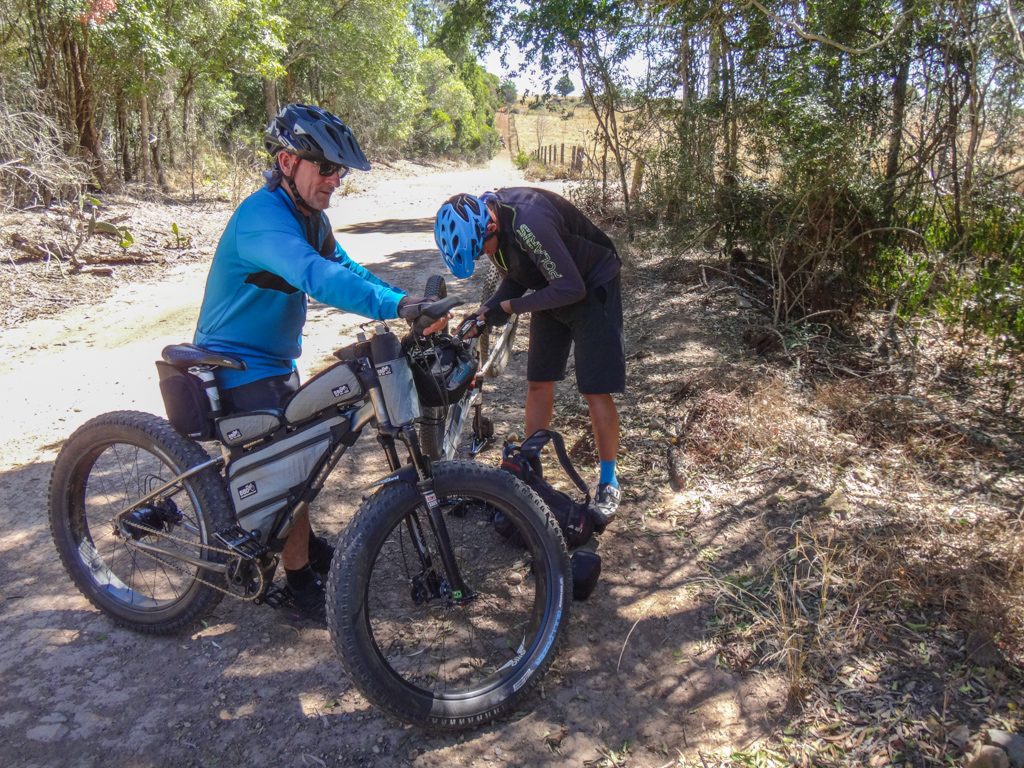 A few minutes later Paul also suffered a puncture.  These thorns were brutal.

I quickly checked my tyres to make sure I wasn’t affected too. 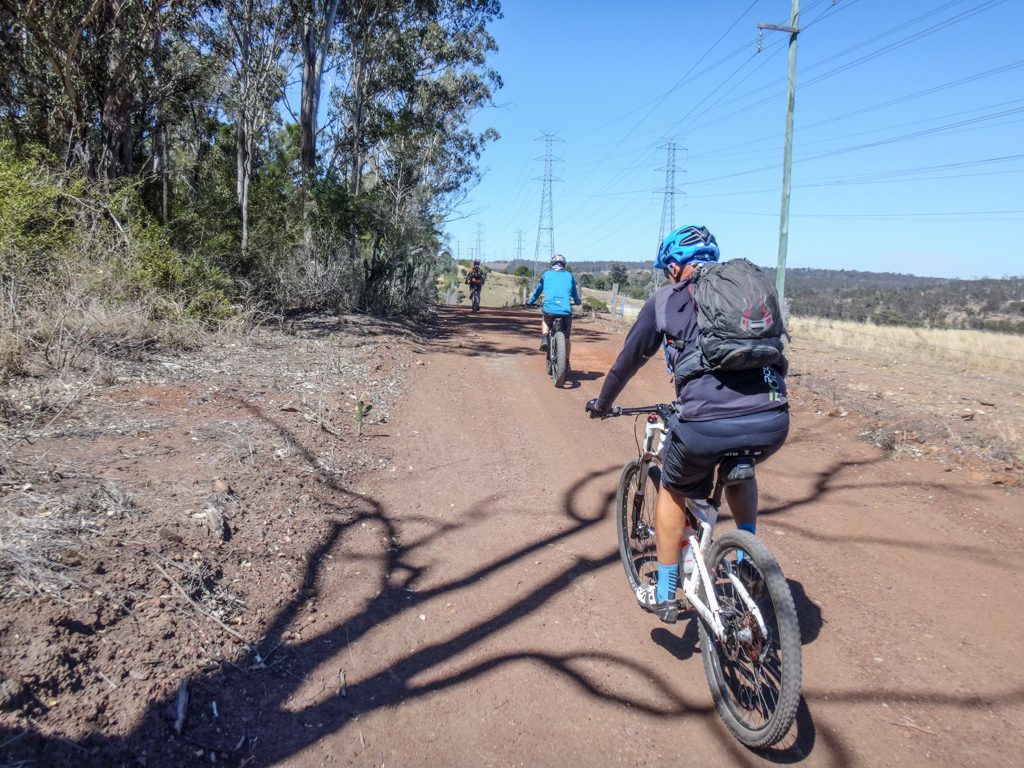 Russel got a second puncture and pumped his tyre up instead of trying to fix it.  Hopefully the leak would be slow and he’d get back with some air still in the tube.

We were close to town now and followed a power-line track along the edge of the forest. 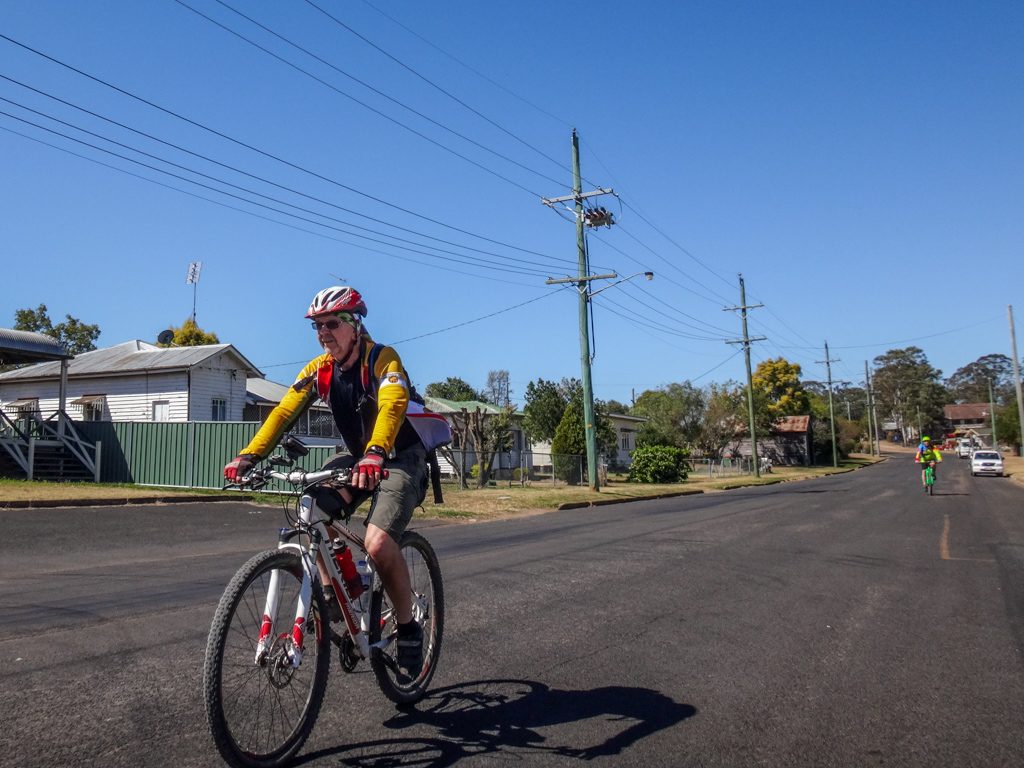 We arrived in town a short time later.

We rode about fifty-three kilometres in just over five hours.

This was an easy ride with only one or two steep parts.

Thanks Darb, Paul, Russel and Simon for a great day out! 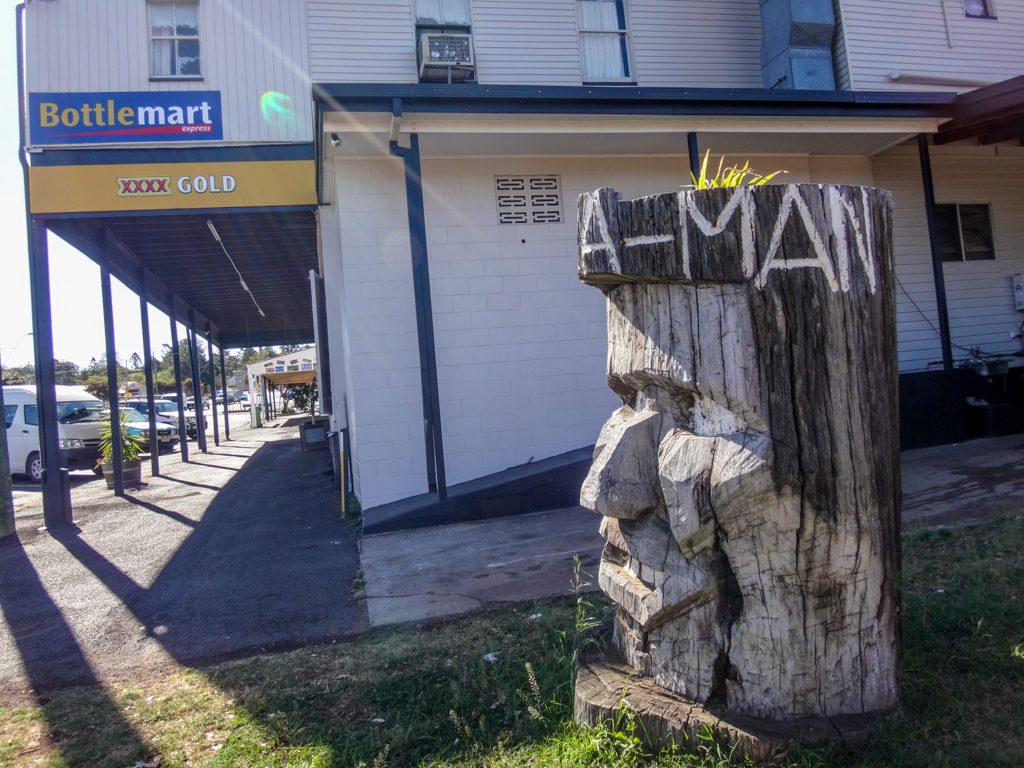