Today’s epic ride started at the small town of Jimna and followed some national park trails down the mountain before looping back again through some rugged country around Monsildale to the west.

There’s some disagreement about how the town got its name.

One theory is that when a Polish gold prospector named it “Zimme”, a polish word meaning “cold”, or “Zimna” the polish word for “winter”. In Polish, “Z” is pronounced as a soft “J”, so this theory is plausible since the prospector discovered gold in winter. And Jimna is quite cold at that time of year.

Another theory is that the name comes from the Aboriginal word “Jimna” which means “Place of many leeches”. A few of the riders from today’s voyage can vouch for the fact that there are quite a few leeches around here.

Personally, I tend to think the Aboriginal word is probably the likely origin of the name. 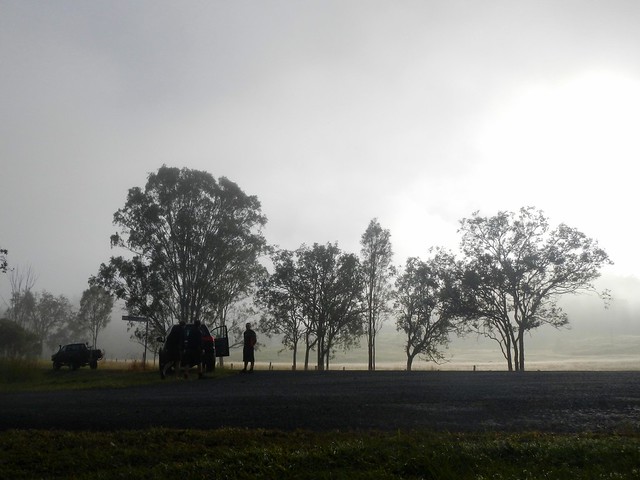 While driving to our starting point, we actually drove past the half way point of the ride, and were able to leave a car there to store some lunch and extra water. It also provided a bail-out option for anyone who didn’t want to continue the ride after the half-way point.

The valley to the south of Jimna was foggy, and leant an ethereal air to the morning while we parked our “Sag Wagon” at the half-way point. 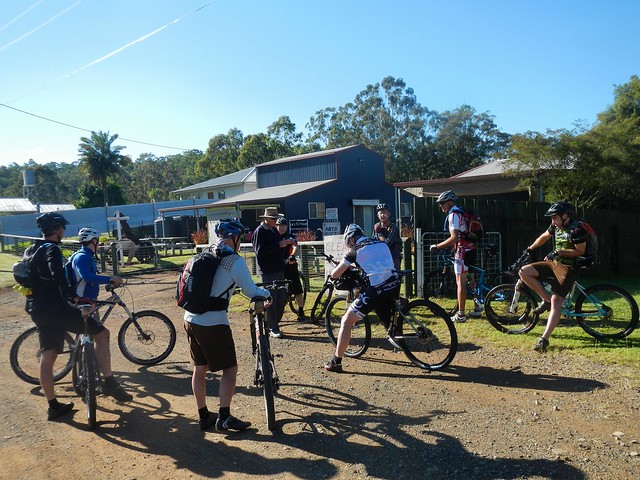 A few minutes later we were up on the mountain in Jimna, above the fog. At the start of perfect clear-skied cool day, fifteen riders were getting ready for the ride. 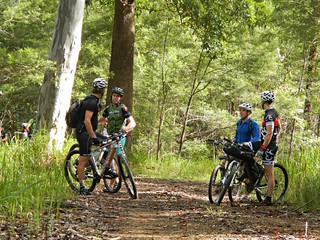 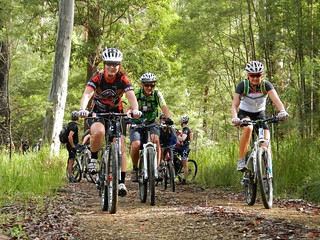 Conondale National Park is very hilly. To keep everyone together, we decided to regroup at the top of each big hill, and allow the slower riders to catch up. This provided a perfect opportunity to have a chat and catch our break. The forest echoed with the happy sounds of bellbirds ringing and mountain bikers chatting. 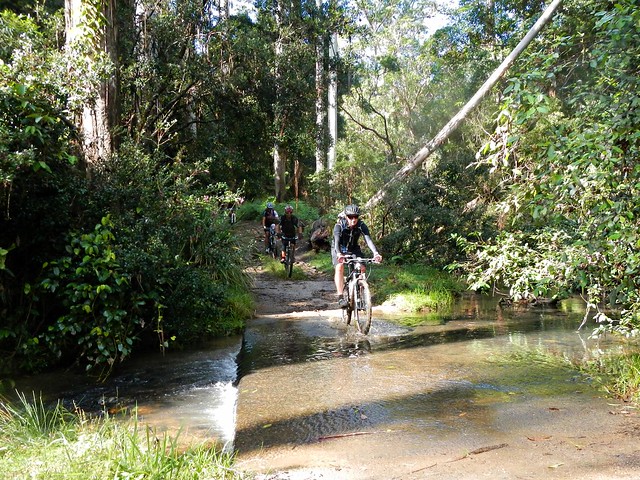 At the bottom of most descents we would often pass a creek. Sometimes this meant trying to ride through mud, but (as in the case above), other times we were lucky enough to have a concrete causeway to make the creek crossings easier. 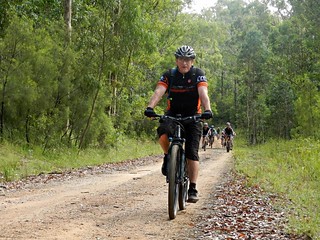 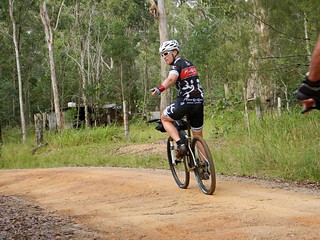 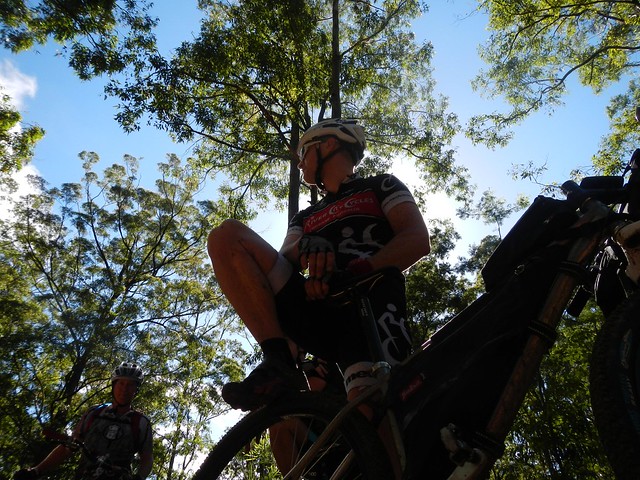 All fifteen of us slowly made our way south through the forest along Middle Road. Thankfully some parts weren’t too steep and we were able to cruise down some long gentle descents. Every so often we’d take a quick break to catch our breath.

Although there were cyclists of different abilities, I was amazed that we were able to keep together as a group for most of the ride. 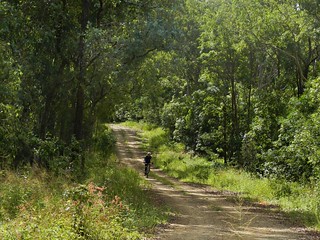 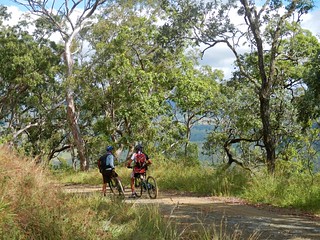 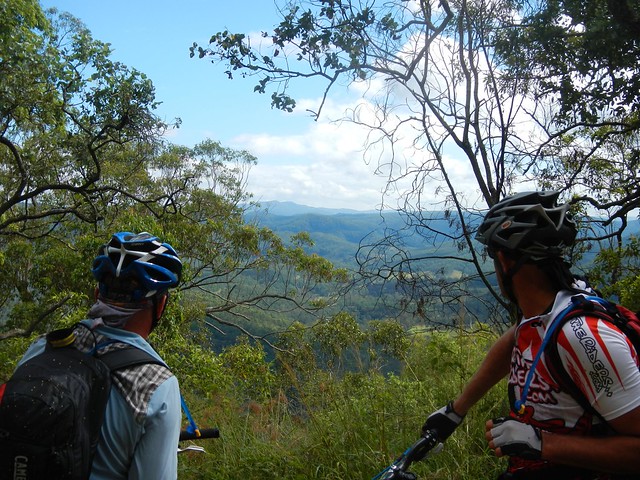 Ten Mile Road was a long fast descent with some great views of the mountains to the west. Contrary to what it’s name suggests, it’s not ten miles long. The road got it’s name from Ten Mile Creek which lies at the end of road. 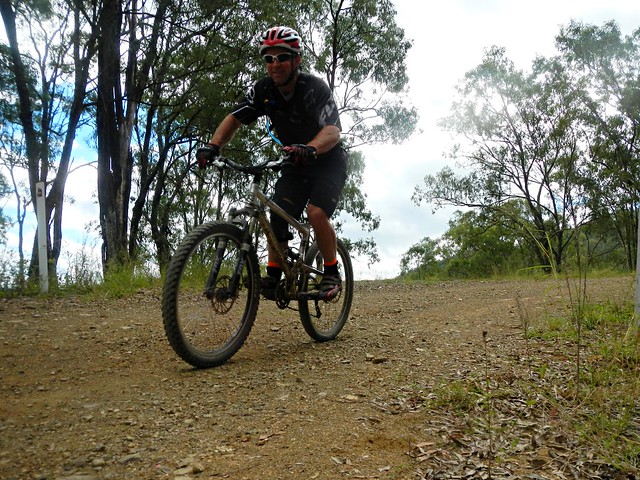 Even though it wasn’t ten miles long, this was a fansatic downhill run. Wind howling in our ears, gravel crunching under our tyres, and suspension working over-time, we rocketed down this road at great speed.

And at the bottom of the long descent… 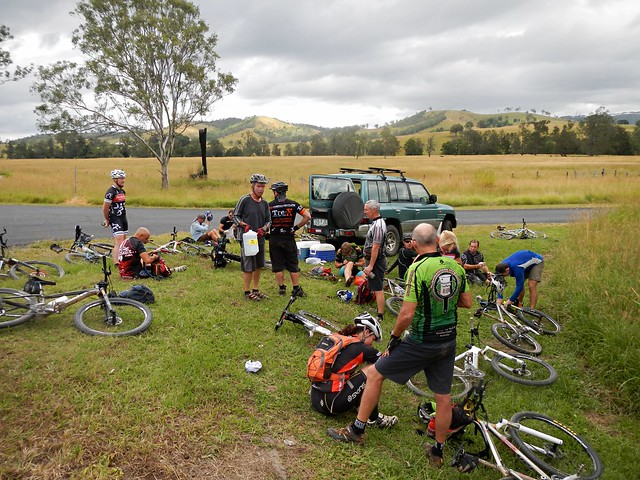 The fog that enshrouded this place at the start of the day had lifted, and we were surrounded by green fields and clear skies.

It must have looked really strange. A bunch of 15 mountain bikes camped on a grassy verge by the side of the road in the middle of nowhere eating lunch. But it was really pleasant. I took advantage of the car and packed a few extra bits of food that wouldn’t normally fit in a back-pack.

The ice boxes in the back of the car kept the extra water cool, and we were able to take on some refreshing cold hydration for the rest of the ride. 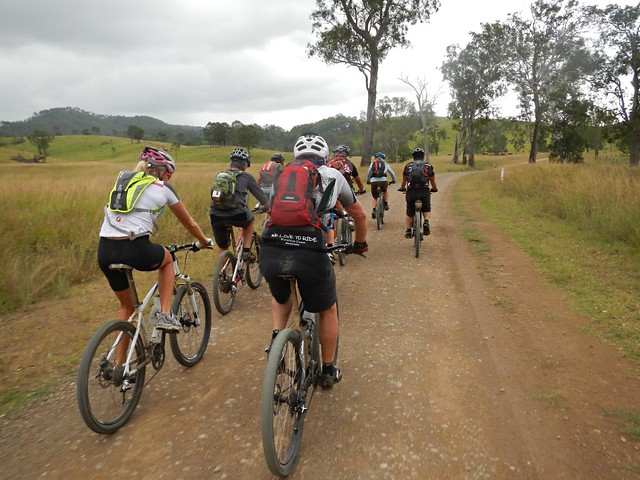 We started out after lunch on relaxing cruise along the flat-ish road westwards towards Monsildale. 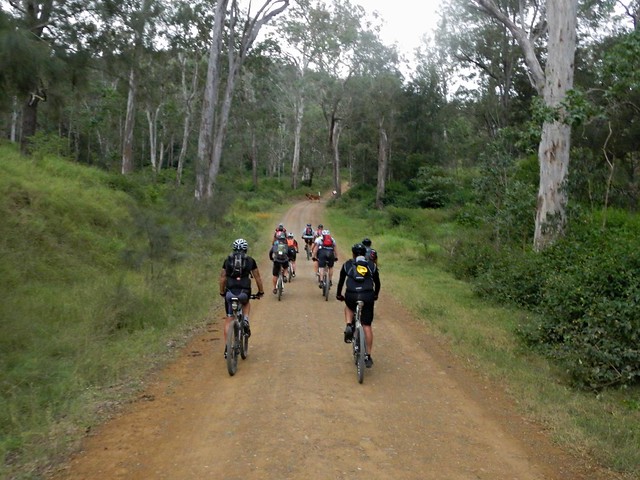 But the trail slowly steepened as we wound our way up into the hills again, dodging free-ranging cattle wandering around on the road. 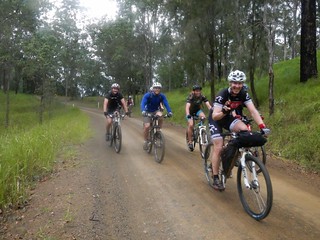 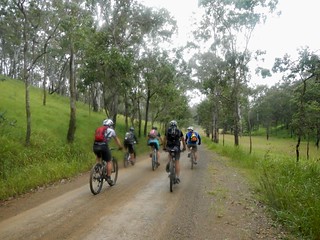 While this climb was steep, it didn’t last too long, and we were eventually rolling down the other side towards Monsildale Creek. 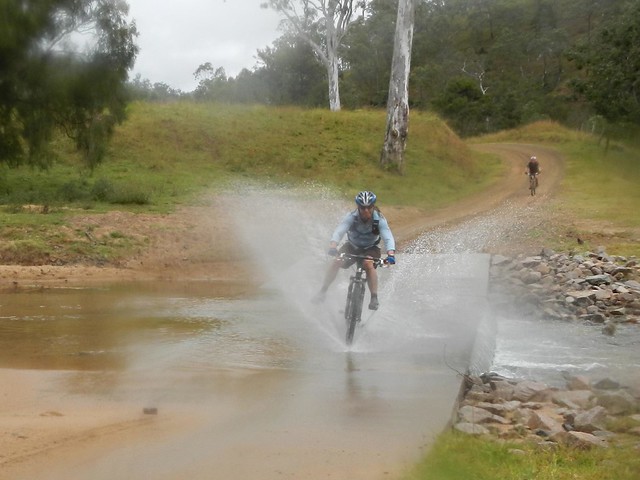 We crossed the creek a few times. My friend Rients shares my dislike of wet feet while riding. Here he demonstrates a novel way to keep your feet dry while splashing through a creek crossing at speed. 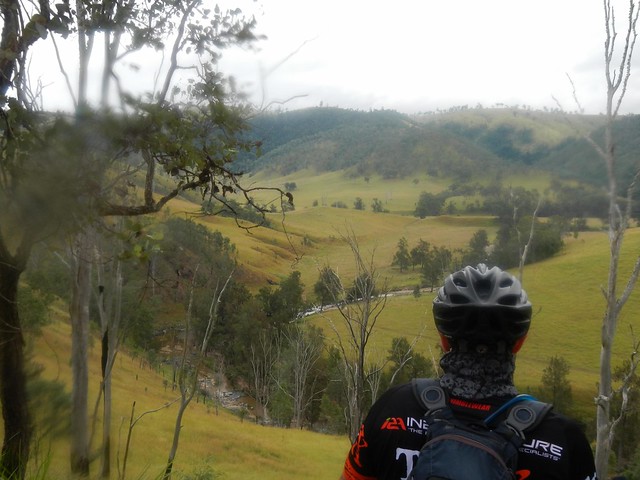 And finally we started the long slow final climb of the ride up Mount Buggery. This steep road takes about 35 to 45 minutes to ascend, depending on your strength. The lower reaches have some great views of the valley before the track twists its way back up into the forests of Conondale National Park, and the end of the ride at Jimna. 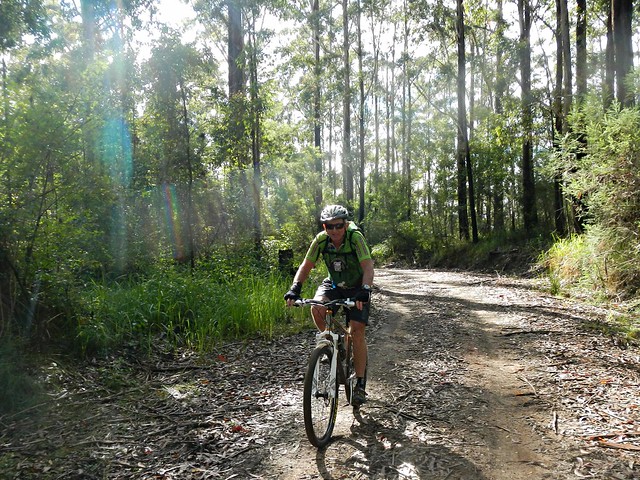 This 72km ride took us about five and a half hours including breaks. Some of the quicker riders arrived back within about five hours.

With todays pleasant weather and the luxury of a “Sag Wagon” at the half way point, I’d rate this one 8.5 out of 10 on the tough-o-meter. In warmer weather with no half-way point assistance, it would rate 9.5 out of 10.

Thanks everyone for another enjoyable ride!