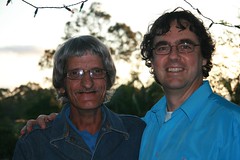 I finally managed to track Bob down the other day.

He was surprised to hear from me after such a long time, and came round for a while on Saturday afternoon.

It was strange looking at him for the first time in 33 years. Age has changed us both, but I could tell it was still the same old Bob I knew in the 70’s.

We reminisced about our school days. I’d completely forgotten that we both went to our first rock & roll concert together in 1975: Skyhooks at Festival Hall in Brisbane. He also came to my 13th birthday party that year and still remembers kissing Leslie Hillhouse when we played spin the bottle.

I got onto Google Maps and showed Bob some of the streets in the town where he lived before his family migrated to Australia. I’m hoping he’ll bite the bullet and go back there one day soon. When we were kids, he always said he’d do it, but he never did.

Bob has taught me that friends can change your life. Not through heroics. Just by being friends.

So when you look at it like that, friends are very important.

Coming Up For Air