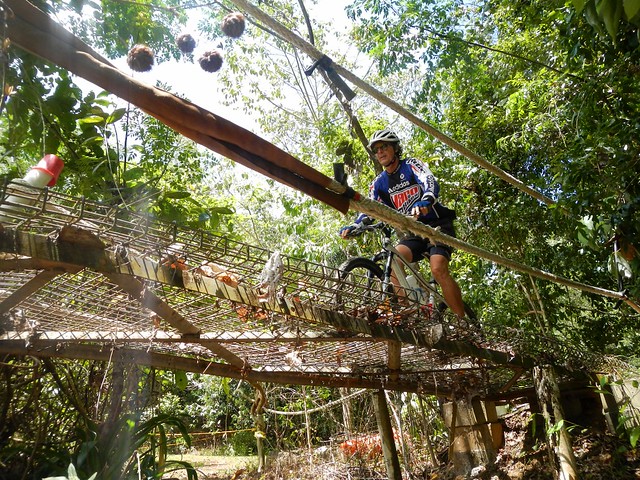 Pilba Peak is a Mountain Biking Park in Mulgrave, near Cairns in North Queensland, run by Dan Foley of Dan’s Mountainbiking. Dan kindly invited me up there for a ride and a look around. He named it after the aboriginal name for Butcher Bird, “Pilba”. 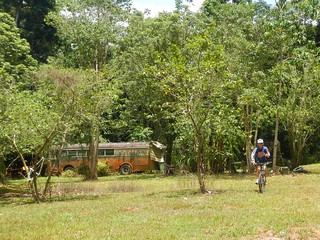 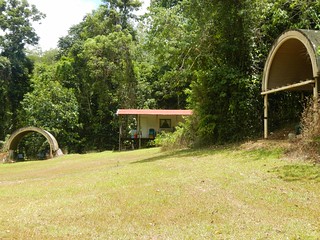 The 100 acre property is nestled in a valley bounded on three sides by the steep slopes of the Lamb Range, Little Mulgrave Forest Reserve and Danbulla National Park. Dan has built an amazing facility with a large camping ground, and kilometres of tracks winding through the rainforest, up and down some of the punishing slopes in the area. 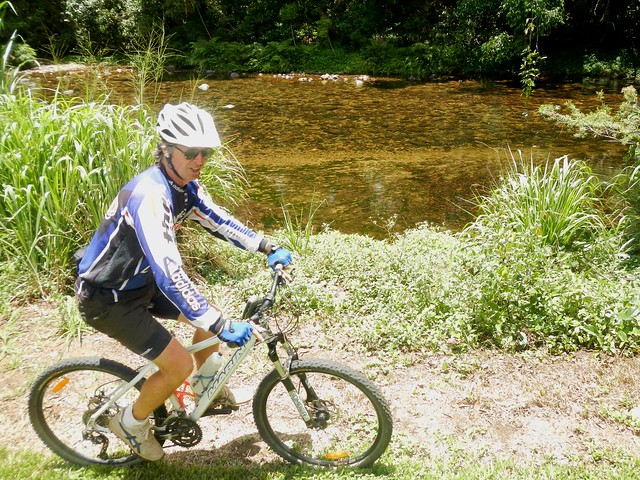 We started our ride near the banks of the Little Mulgrave River, then slowly made our way up one of the steepest switch-back climbs I’ve ever done, which Dan affectionately named “The Ladder”. I had to push my bike part of the way up, and was relieved to eventually reach the top. 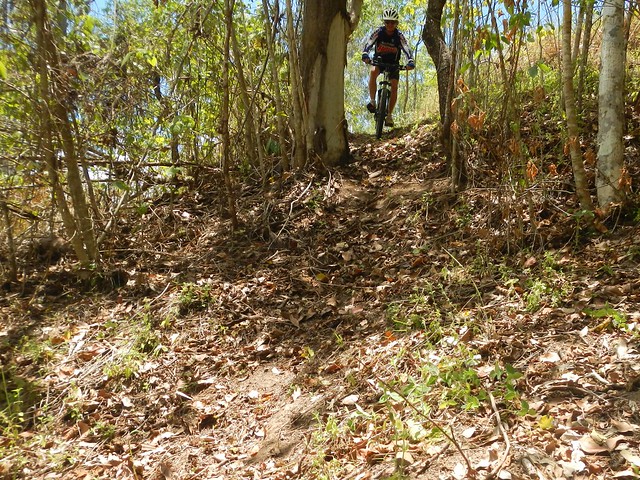 Like all good climbs, the pay-off is the fun you have on the way back down. We had a hoot dropping back down from the peak into the forest below. 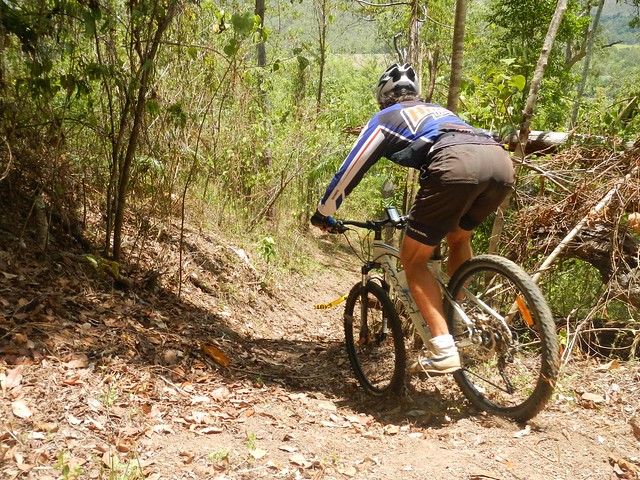 Just make sure you get as far back on the bike as possible when you ride these descents. They’re pretty steep in parts, and once you start going down, it’s difficult to stop. 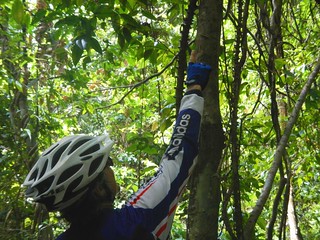 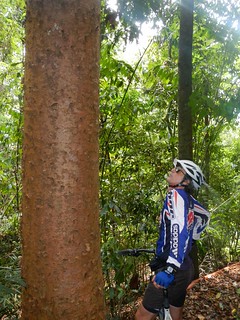 Once back in the cool shade of the rainforest, Dan pointed out a few of the amazing plants native to this part of the world, including (yet another) spiky tree waiting to maim an unsuspecting passer-by, and an old Kauri Pine towering over the forest. 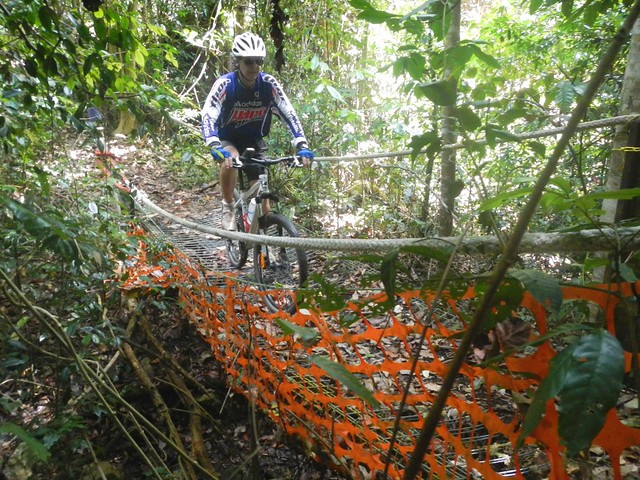 There are miles of challenging tracks winding through the jungle, over tree routes, through creeks and over leaf-litter, as well as a couple of fun bridges that pass over some of the steeper creek crossings. It takes a bit of courage to ride over them the first time, as they bounce around a bit, but they’re a lot of fun once you get the hang of it. 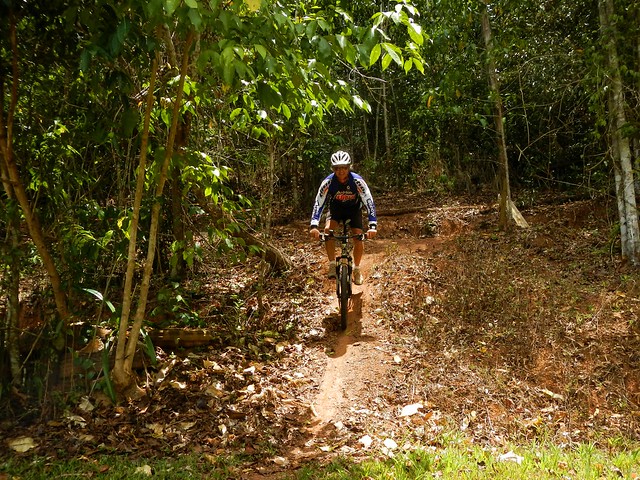 Most of the tracks finish off back at the camping ground, where you can enjoy a cool drink before heading back into the rainforest for more steamy North Queensland mountain biking goodness 🙂 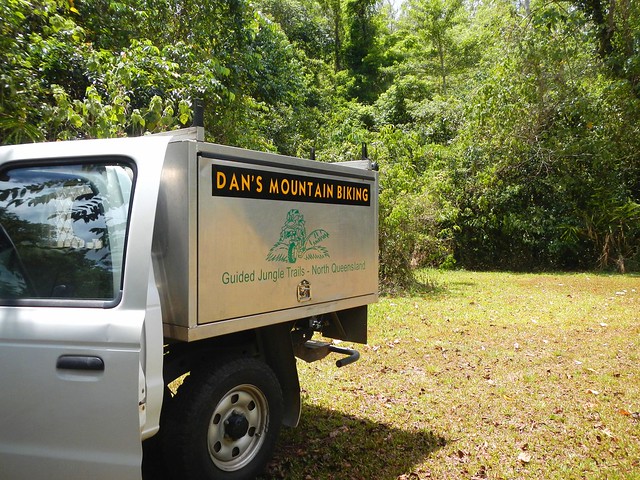 Surprisingly, this “Guided Jungle Trail” ride with Dan took us about an hour and a half, during which time we covered just under 6km. It was a lot of fun, with a variety of different tracks to suit different skill levels, including a “Pro” course for those feeling partilcularly masochistic. Dan is a great riding buddy. What he has achieved at “Pilba Peak” is outstanding.

On the tough-o-meter, I’m rating my short ride 8.5 out of 10. I was huffing and puffing by the time I got to the top of “The Ladder” but was grinning like a cheshire cat for the rest of the time.

Thanks, Dan for a really enjoyable ride!